I bought Winston as a 8 week old puppy and he had his first 5 hour ride in my 1963 VW Panel Van the day I picked him up. He has been loving to ride every since that day. It usually doesn't take more than a half mile before he's fast asleep. It doesn't matter the vehicle nor where we are going. He just turned 11 years old in May 2015. His Mahogany is turning to a mixture of gray. He has always been a great basset hound even through the puppy stage.

This is Sadie my bloodhound. I bought her at 13 weeks old locally. Of all the hounds I have owned since 1987, she has been the most obnoxious hound I have ever owned! LOL  She was fine while I was around but hated to be left alone until the age of 5, when she stopped being so destructive. She has a strong tracker personality, thus gets bored if left alone and can get into anything even if it's locked. She loves to walk with her nose to the ground, loves to eat and sleep. She will be 10 years old in June 2018. She is a light Red and 83lbs. Her favorite activity is knocking off the 15# barbells that hold the lid to the dog food container, then helping herself to a free meal. You can't be mad at a hound with a face like that.


I bought Heidi online from Guardian Angel Basset Rescue in July 2011 here in the Midwest. Since day one she has blended into her new home with no problems. I cannot believe the rescue service retrieved her from an animal shelter as a voluntary turn in. Based on her medical records we thought she was around 2-1/2 years old when I bought her. That would make her 9 years old sometime in December 2017. She has a great nose and is stronger than Sadie when she picks up a scent of a rabbit. She loves to sleep and will not wake up as the same time as the other two hounds. She has been labeled "Queen of the Couch".

It started with a post on the Facebook Group "Bloodhound Owners". They were looking to re-home a bloodhound that has separation anxiety and feared thunder. They thought someone familiar with the breed or might already own a bloodhound would be good for her. With her separation anxiety the owner thought it might be best in her case if that new owner would work at home or be at home during the day. That was me. I had one bloodhound and retired in April 2014. I had plenty of room for her and I was pretty sure the three hounds I had at the time would get along fine with her.

After a phone call conversation to get to know more about "Dipstick", I made arrangements to pick her up, a 4 hour drive away. By the next day I talked myself out of it and canceled the trip because I thought 4 hounds would be too much. A few days later on August 28, 2015 I emailed to see if she was still available, she was and I picked her up on August 30, 2015. She has been a great addition for Sadie, who needed someone with her size and strength to play with. I found it no harder to care for two bloodhounds rather than just one. She will be 9 years old August 2018. 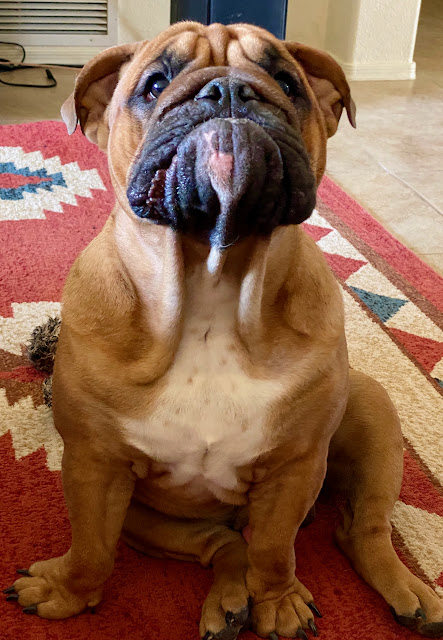 For as long as I have had basset hounds (1987) I always had an interest in the English Bulldog. Walter White is my first one and he has been a great puppy from the first minute he walked into the house that rainy Saturday night in April 2020. He is a very very smart dog, funny, and self acclaimed watch dog for the house. It is amazing what he can hear while he is sleeping. Walter was born February 2, 2020. He is just like the AKC writeups were, loves hanging out at the house, sunbathes, makes the strangest sounds I have ever heard coming from a dog and snores a lot. Taking walks is not his thing as I have tried with a 25' retractable leash and he doesn't move from the porch, just stares at me. Stubborn. 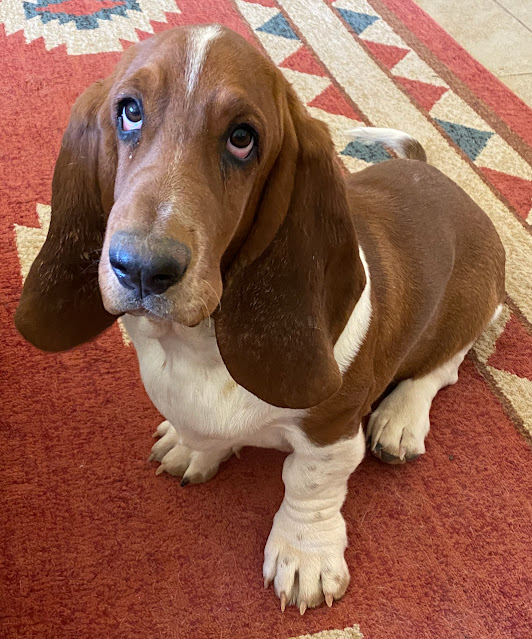 Henry was born June 29, 2020 and stepped inside our doors on August 26th, 2020. I had always planned to get another basset hound but the waiting list was long and it was somewhat unexpected that Henry would show up just 4 months after Walter's arrival. He had 4 brothers and 5 sisters, so it was a large enough litter where I moved from December 2020 back to August 2020 on the list to choose which basset hound I wanted. I knew after his two week old photo, he was the one. He has a nose that is one of the best.
He has found stuff around here and I have no idea how. He can find a hidden tree root or a chunk of small wood under our Arizona rock yard. He loves being outside day or night, hot or cold and it doesn't matter. He is a full-time house hound though. He loves taking walks where his nose gets quite a workout and rarely comes up from the surface ... nose down and tail up and he is off for his .75 mile walk. Big eater. Loves not his food but Stella's and Walter's. He is going to be big hound with a great personality. 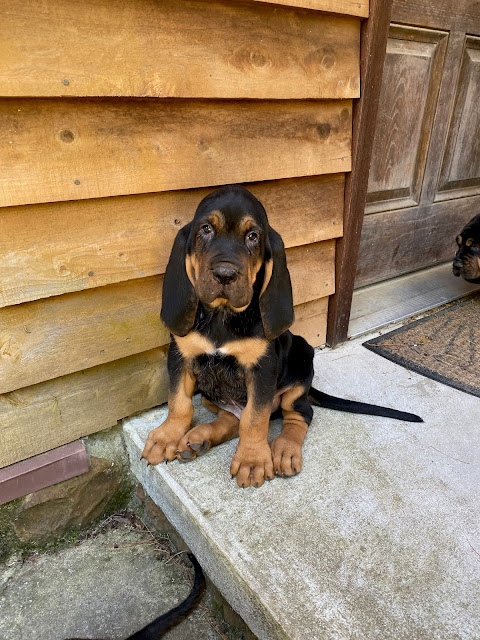 It was during the week after I lost Stella that a surprise happened. I started looking for a bloodhound and found this great puppy at BloodhoundsARunning Bloodhounds about 80 miles away from where I lived. I did not know I was choosing him until I arrived to look at the three puppies that were left out of a litter of six. From the minute I saw how he acted I knew he was the one. He is very smart and laidback. He will be a big boy in a few years when he is fully grown. He was born 26 April 2021.