Low Temps and Lots of Snow

Winter came early this year to the "tropics" of Southern Indiana. Consistently 12" of snow. 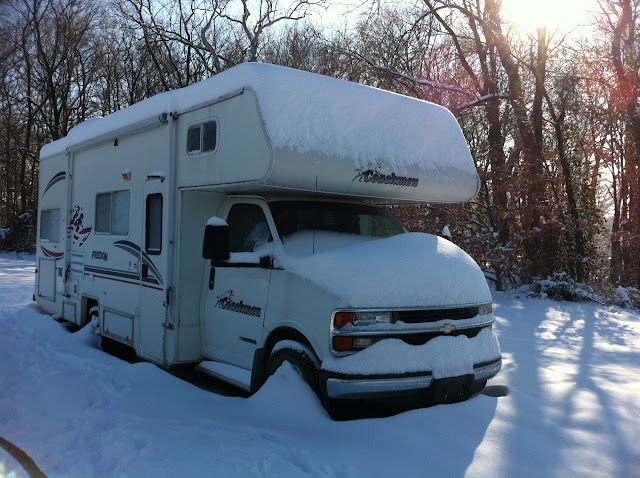 At least we were warned and there were no surprises, except for one.

Last summer/fall, when I was downsizing and taking all kinds of stuff to the goodwill I really thought I'd be out of here by November 15 and snow boots were no longer needed. So this past Saturday I was buying some very nice boots to keep the feet warm and dry as I worked removing snow. The mail carrier will not deliver mail unless he has a cleared path for him, on the shoulder of the road to the mailbox. Also the Basset Hounds have a hard time relieving themselves when the snow is deeper than they are tall. So, with a new pair of North Face Snow boots and my handy shovel, Saturday afternoon was spent removing as much snow as possible with more forecasted on Tuesday.

I started a different job a few weeks ago. Same building, same department just a different area but back with the same people I worked with for a couple of years prior to my change in 2013. It's a great change as far as working but I am still planning on retiring in May 2014 and hitting the road. I will have a good system for them to use by the time I leave and that was what they wanted.

I can't say I have any urge to travel this winter. It's the normal "hibernation season" with me, happens every winter. I am sure by the time the weather changes in March I will be ready to get the Coachmen ready for some weekend road trips.

Still reading the blogs from the list on the left, sounds like it is colder than normal everywhere. I see where Chinle had a scare recently while towing her trailer. When she mentions a Class C, I have offered to sell mine to her since she likes it a lot. One issue that prevents it, her Toyota FJ Cruiser does not tow wheels down even with a manual transmission.  Al and Kelly have had some unexpected colder temps in their beautiful house in Arizona.

That is about all from the "tropics" of Southern Indiana". Not a lot going on, more ballgames than I have tv's, more snow than I want and fighting through the annual winter blahs.
at December 09, 2013
Email ThisBlogThis!Share to TwitterShare to FacebookShare to Pinterest
Labels: 2003 Coachmen Freedom 258db, Snow, Winterize