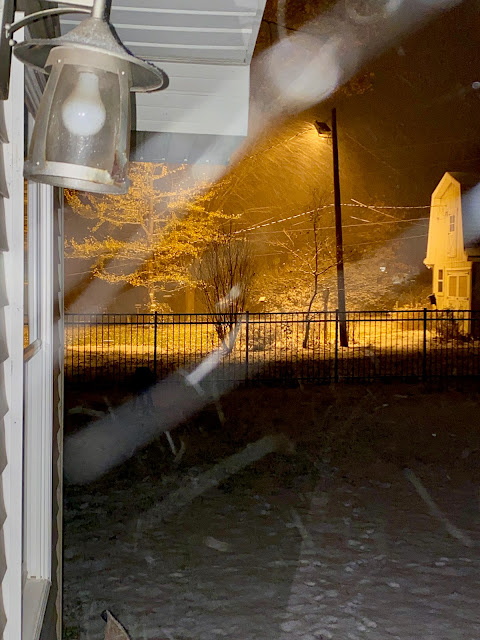 We were warned Thursday when it was 79° that snow was possibly a week from Friday.(18th). By last night's tv weather news, they changed that forecast to snow starting around 4:00am this morning and stopping before daylight. He was right and wrong. It did start around 4am but it has not stopped snowing a little more than 4 hours later. Will it start melting this afternoon when the temps are in the mid 30's for the high temp of the day?
If you look really close to the left side of the photo, just left of the fence post is Watson outside at 5am checking things out. 26° was too cold to stand with the door open to take photos. 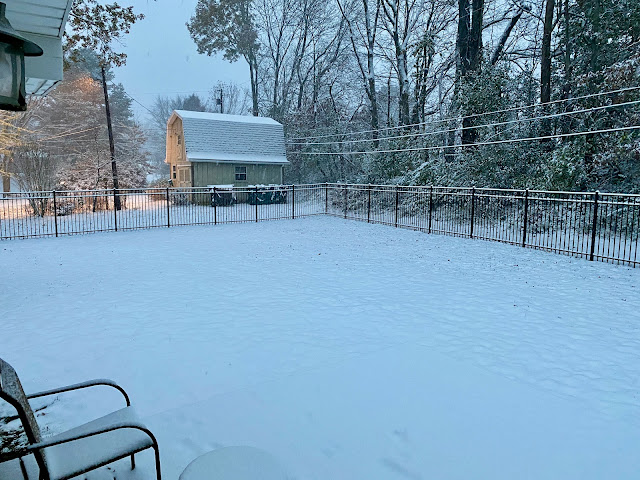 I am told we rarely get the blizzard type snows down here in "the tropics", mostly a couple of inches maybe. From the snow on top of the table or fence line it looked like we were close to our maximum threshold. Of course the hounds did their regular winter routine ... wake me up at 5am or earlier with the time change, go outside, eat, go back outside, then back to sleep. 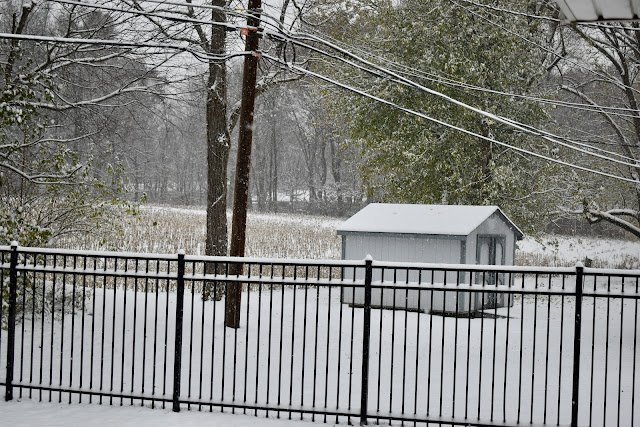 After these photos were taken I saw my first deer in the neighborhood but was not able to get my camera fast enough as 3 of them were crossing the street heading for this field a couple of houses down. I waited for them to hop out into the field but they never showed up. I wondered where they went?? 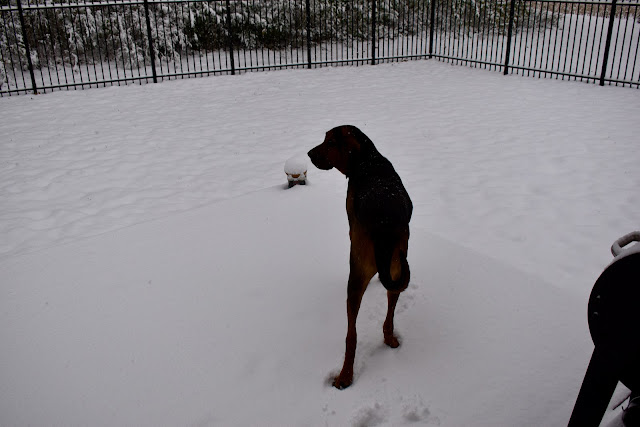 Watson saw his first snow last winter as a 8 month old puppy but this morning he seemed confused over the white stuff. It did not energize him like the snow did Sadie and Stella a few years ago. His earlier trip he did not stay outside long. 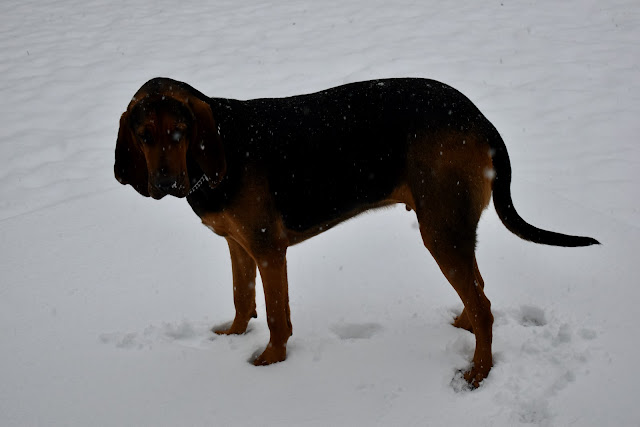 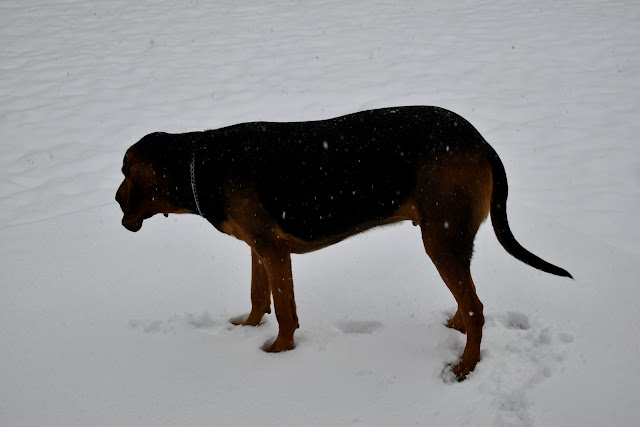 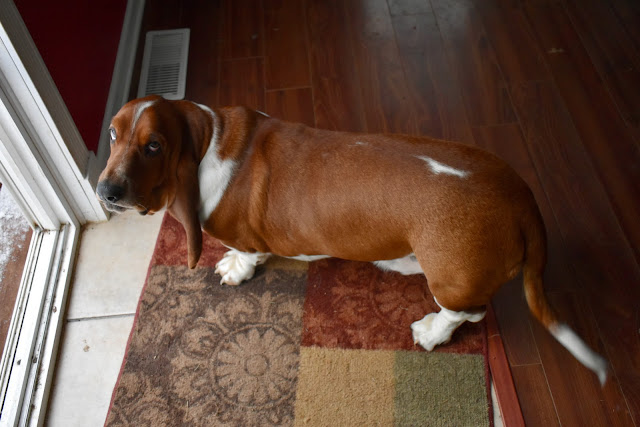 Since Henry never does anything instantly, I held the door open for him to go outside but he and Walter were not sure they wanted this snow so early. I think they prefer that 79° they felt just a day and a half ago. 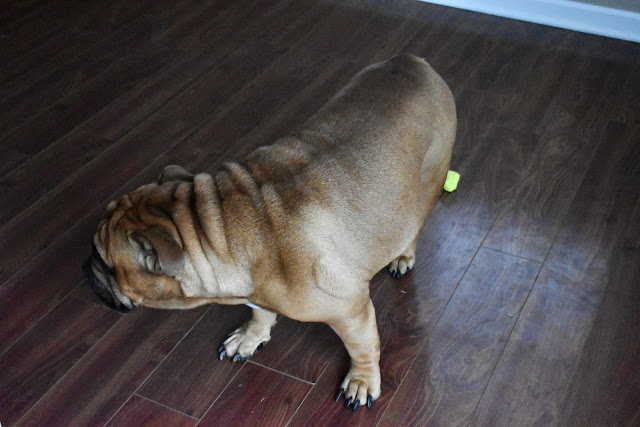 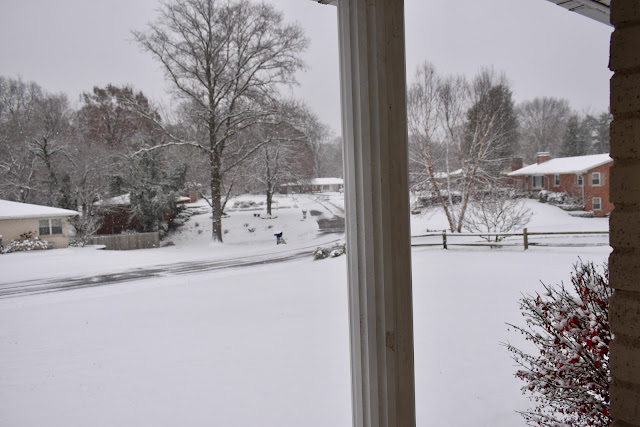 I hate to disappoint you but unlike past years on this blog, I will NOT be walking the surrounding area taking photos of the snow and trees. It is Football Saturday starting 11am CT and about all I will be doing today and tonight is multitasking while watching the games and being their doorman. They won't stay out long when they do go out and I might not get out at all, even to walk across the street to get my mail. 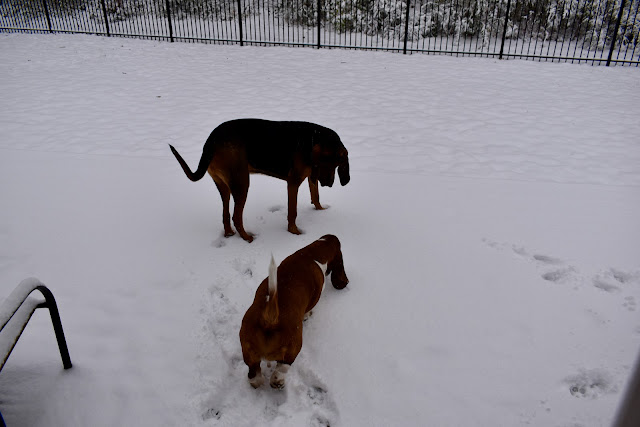 These are poor quality photos this morning, the lighting is bad and even after some detailed editing didn't make them look much better. 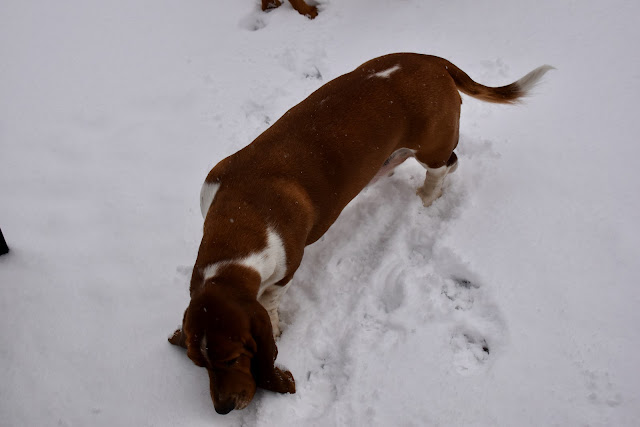 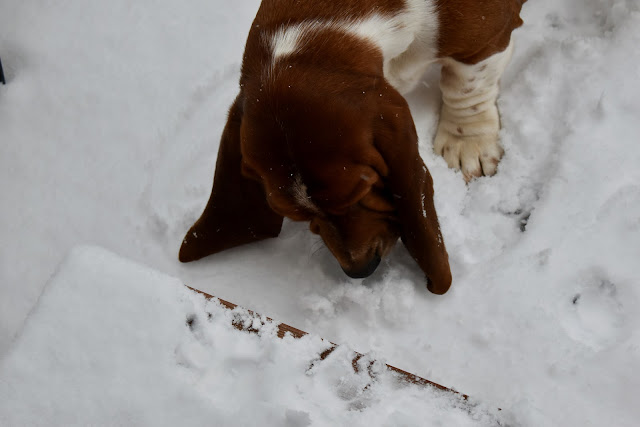 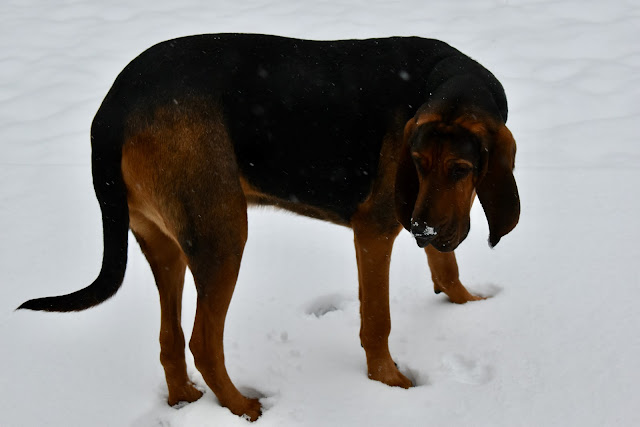 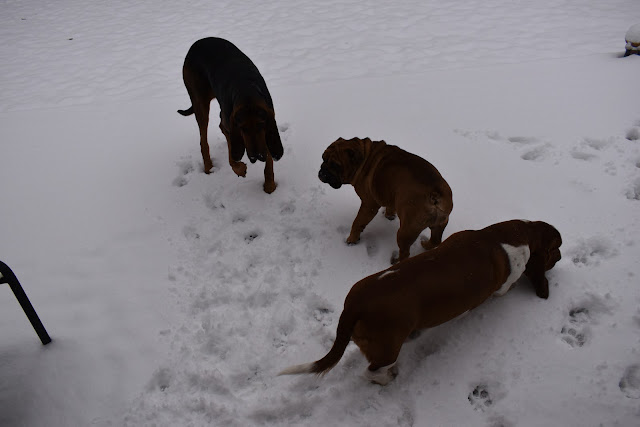 I was shocked !!!! About the time I was going to close the patio door and leave Henry and Watson outside, Walter SPRINTED in back of me and headed outside. That is not Walter at all but I guess he was that curious. 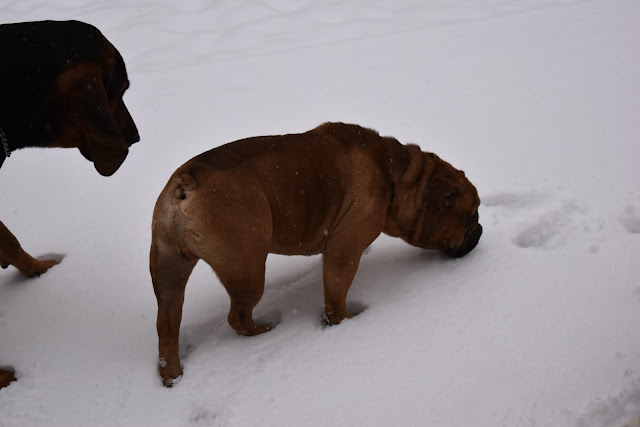 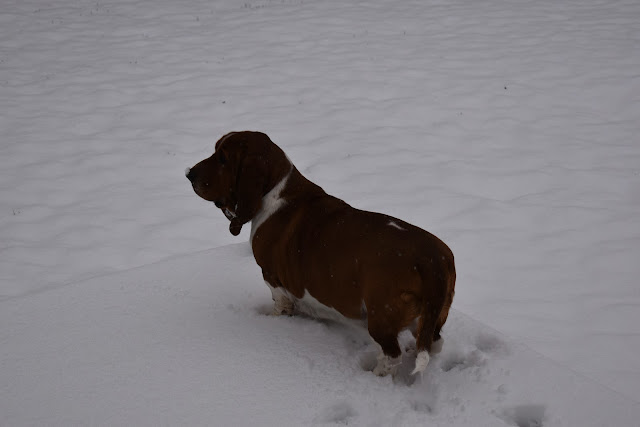 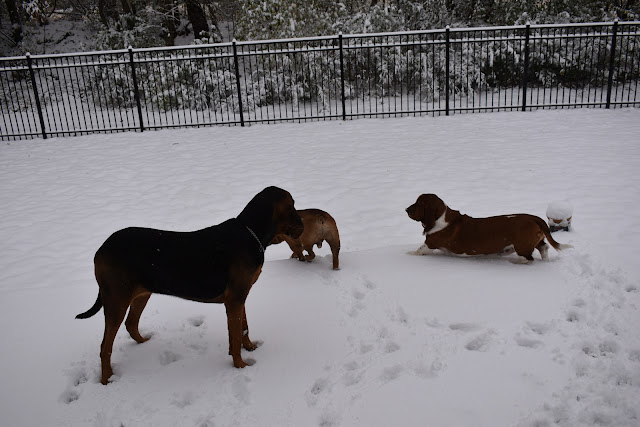 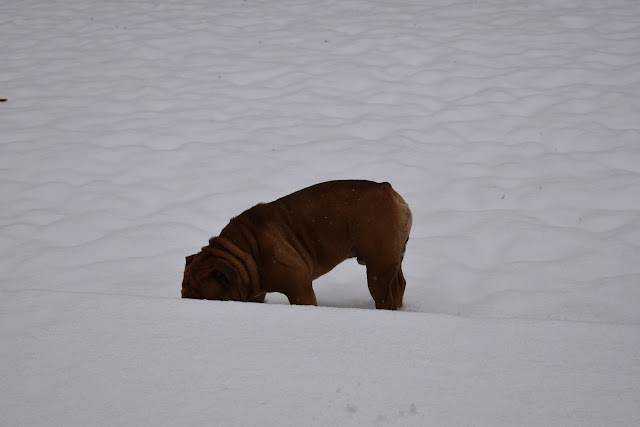 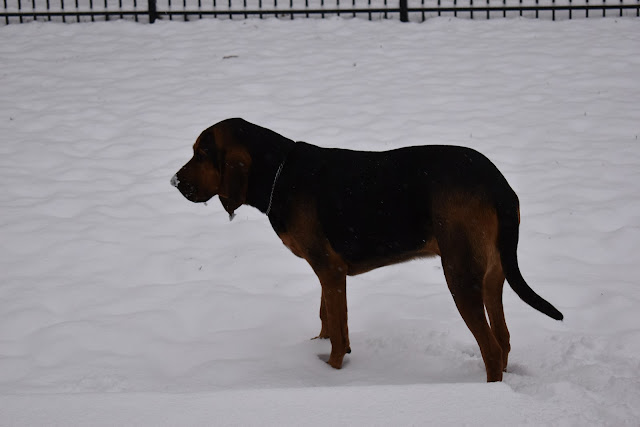 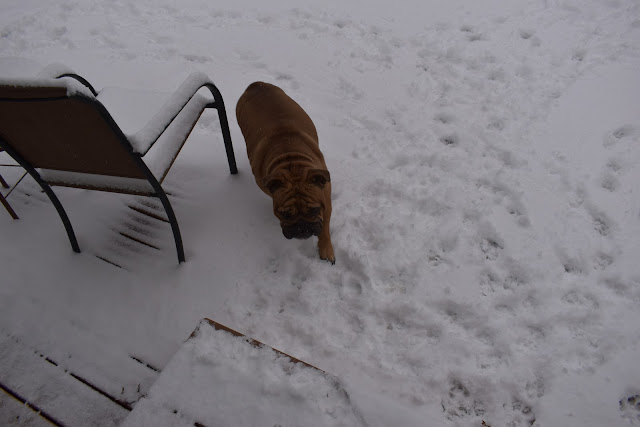 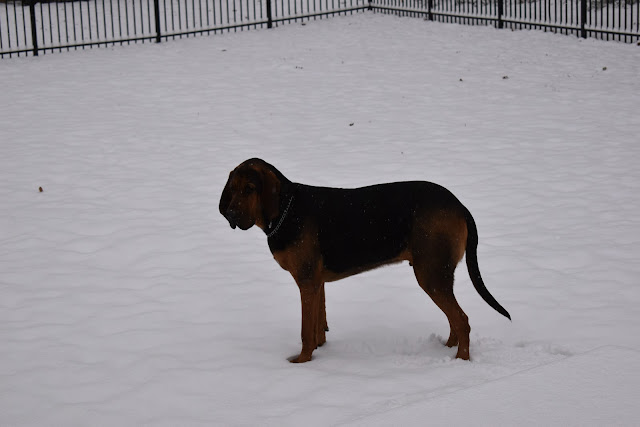 They were happy to get back inside and were back to sleeping within minutes. 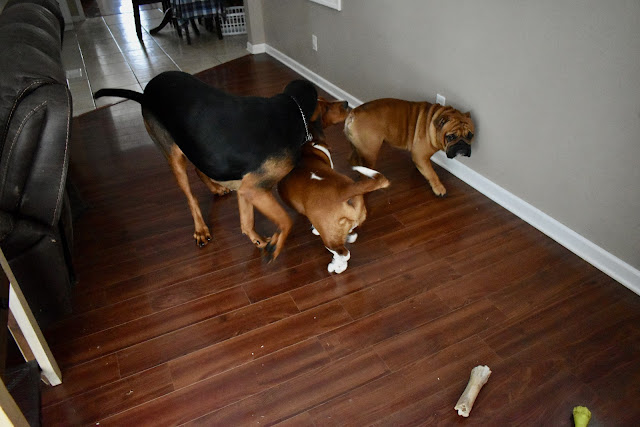 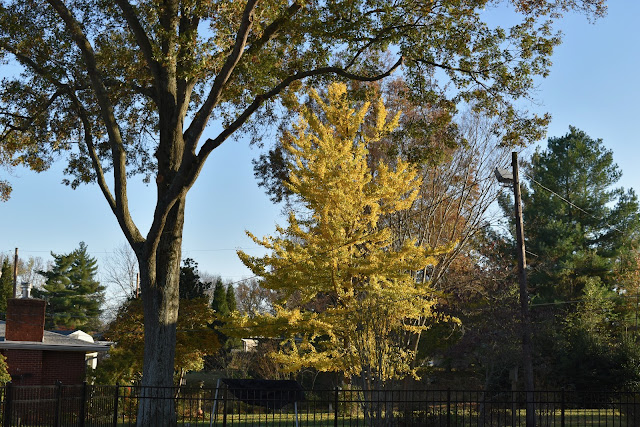 Hard to believe this was Thursday afternoon as we sat outside enjoying most likely the last hot day of 2022 in warm 79° weather. 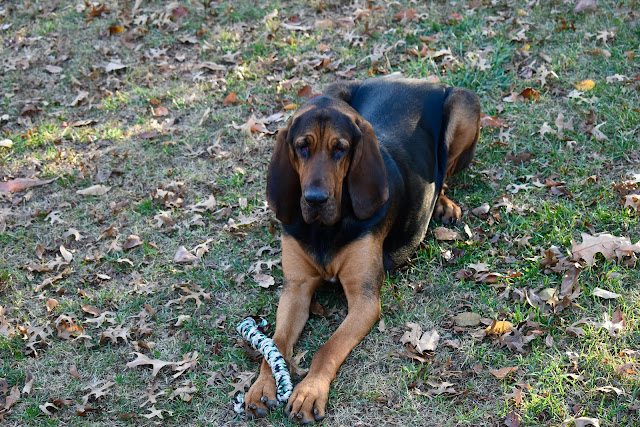 I picked up a new rope bone the other day. Henry is usually on one end of it pulling with Watson on the other end doing the same. Last night with Henry using the computer room carpet, he won the contest because Watson's feet were on the slick wood flooring. 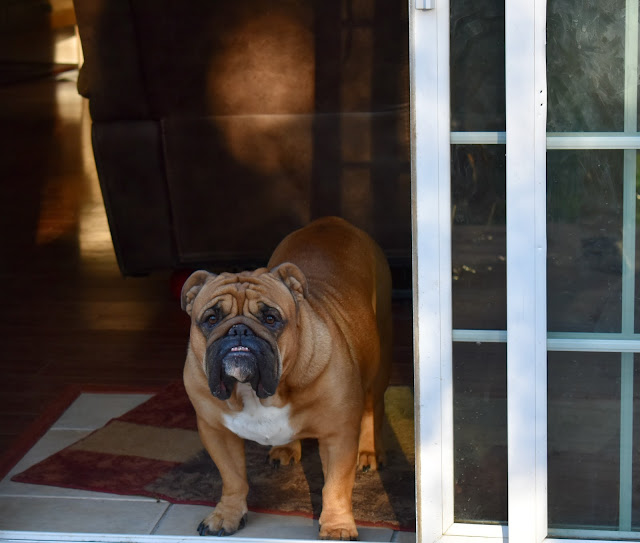 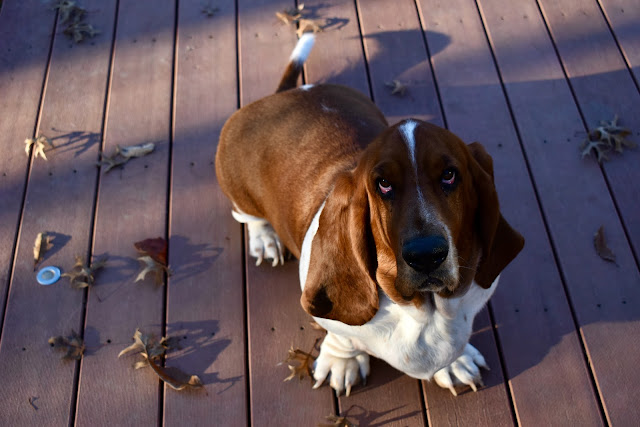 Well things are going to get interesting now. I am going to attempt to cut dog toenails after this post. Henry doesn't mind and will lay on his back, Walter will be scrambling all over the house and Watson will fight me. He will use his front legs and paws like a boxer to keep me away from him, from holding his feet Most definitely he will not let me get him to lie down. He let me cut his nails for a long time but not now that he is older I need to be able to see under the nail so I don't cut the quick of his black nails which makes the job that much harder. Because of that I would prefer he would be laying down so I can see.

As I glance outside my computer window the the snow is still coming down pretty hard. I think it's time for some waffles, and scrambled eggs as my pre-game meal this morning. Kickoff starts at 11am CT and I will be pretty much out of commission until tonight sometime after midnight.

Luckily these two hounds and the one dog keep things real and funny in this insane world.

Winter came too fast in "the tropics" of southern Indiana.