Yard Work is Kicking My Ass 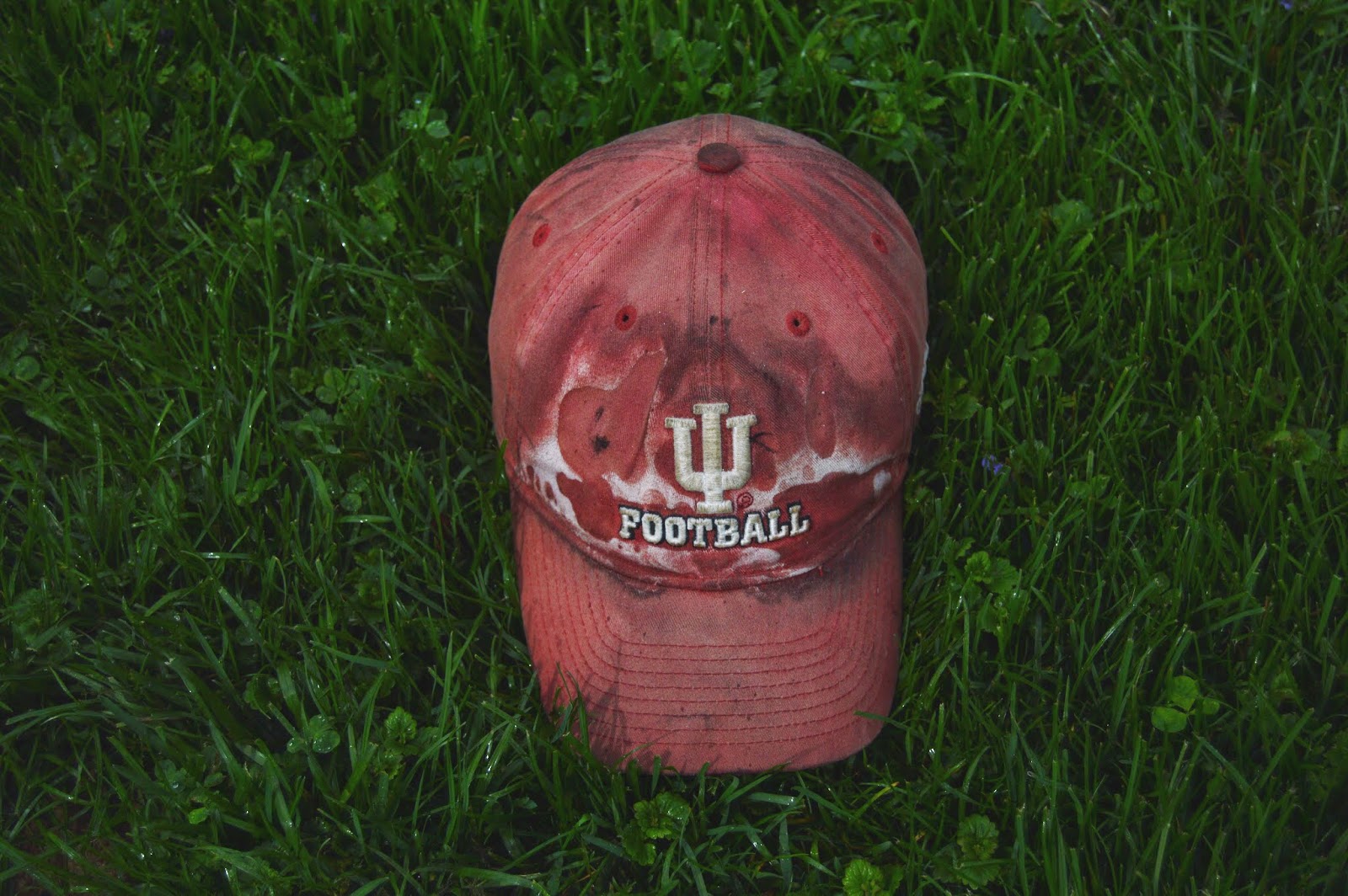 As you can see from the hat, I've been working way too hard outside in great weather. I'll get to the yard work with some photos but first since I have not posted in over a month I thought I'd write about general stuff first. I will say my time on the internet is still low. I'll read my Feedly feeds, check the sports news, over my first cup of coffee then turn off the computer or put it in the sleep mode until early evening. Every day it's been sunny outside, I've been outside 4-6 hours per day doing things, by late afternoon my body is sore (out of shape) and by early evening I'm headed to bed.

That's quite a change for me since I'm a night person by nature and spend most of my time up past midnight, sometimes till 2am or 3am. So when I am going to bed and am fast asleep by 9:30 or 10pm, that's history.

Heidi has just started her 11th week on RESPIT. I've been giving her 1ml shot per week as directed. I started with .1 and then increased it each week by .1ml until the 1ml was reached. A couple of weeks ago I saw a lot of improvement, although it is said not to expect any signs of improvement for a 140 days of treatment.

Her stomach and armpits have healed. Under her neck has healed and has white hair growing back. She continues to lick her front and rear paws, will tear off baby socks when worn to protect her feet, so those spots on the paws are healing, the skin is a lighter red and nothing raw. Her hair is trying to grow back on all the spots that were red and raw.

One of the side affects of the RESPIT, is being lethargic. She is all of that for the first 3-4 days after the shot on Wednesday. Still she is back to sprinting around the house after her first trip outside to start her day. She is also back to barking when she wants fed, so I take it she is okay. 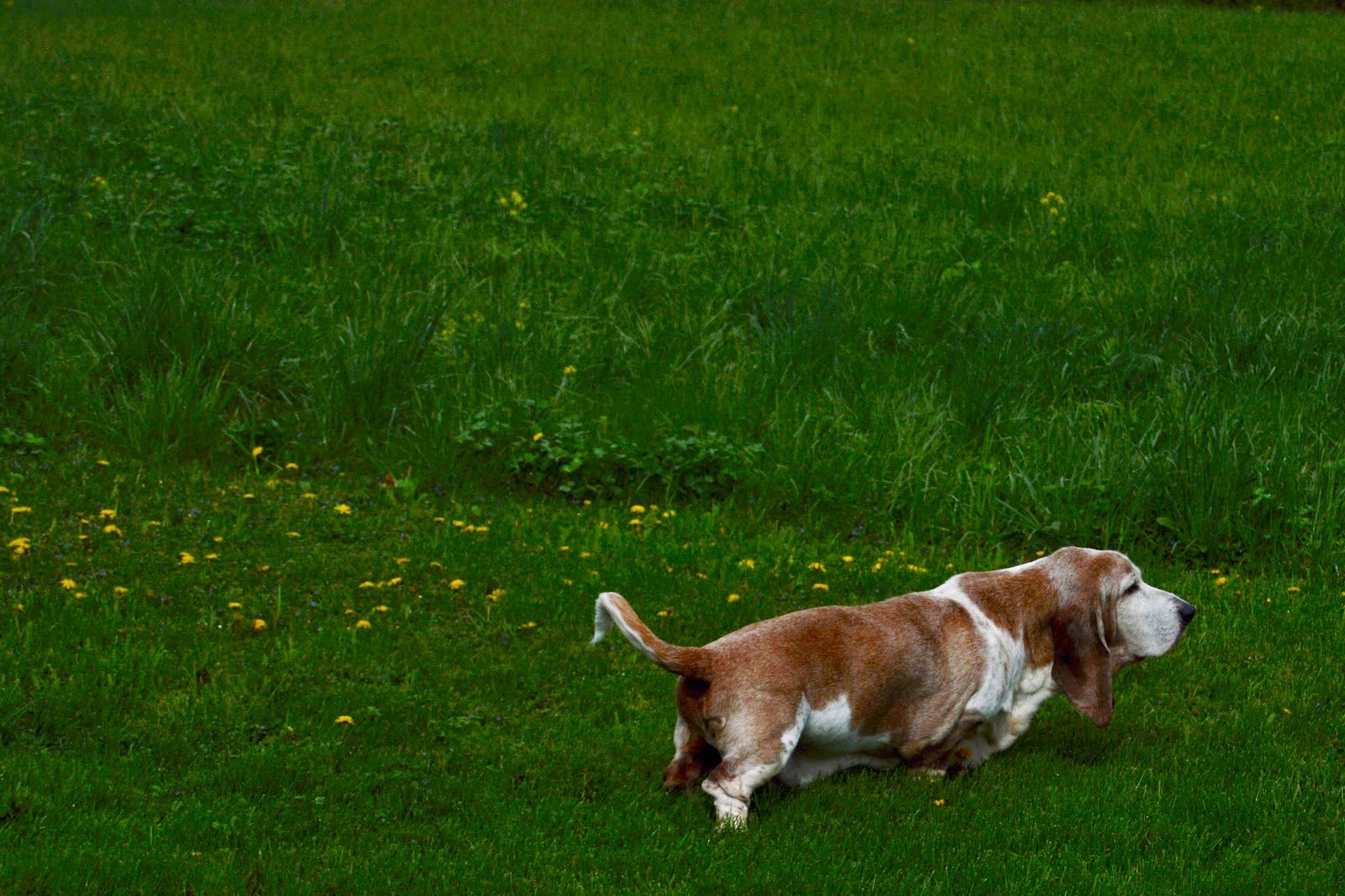 Winston has had a little lower back/hip problem as all older bassets have on occasion and has a little trouble getting up the two steps to get into the house. I'm finding that the "buffered" aspirin helps that lower back out, although I don't give him that on a daily basis. 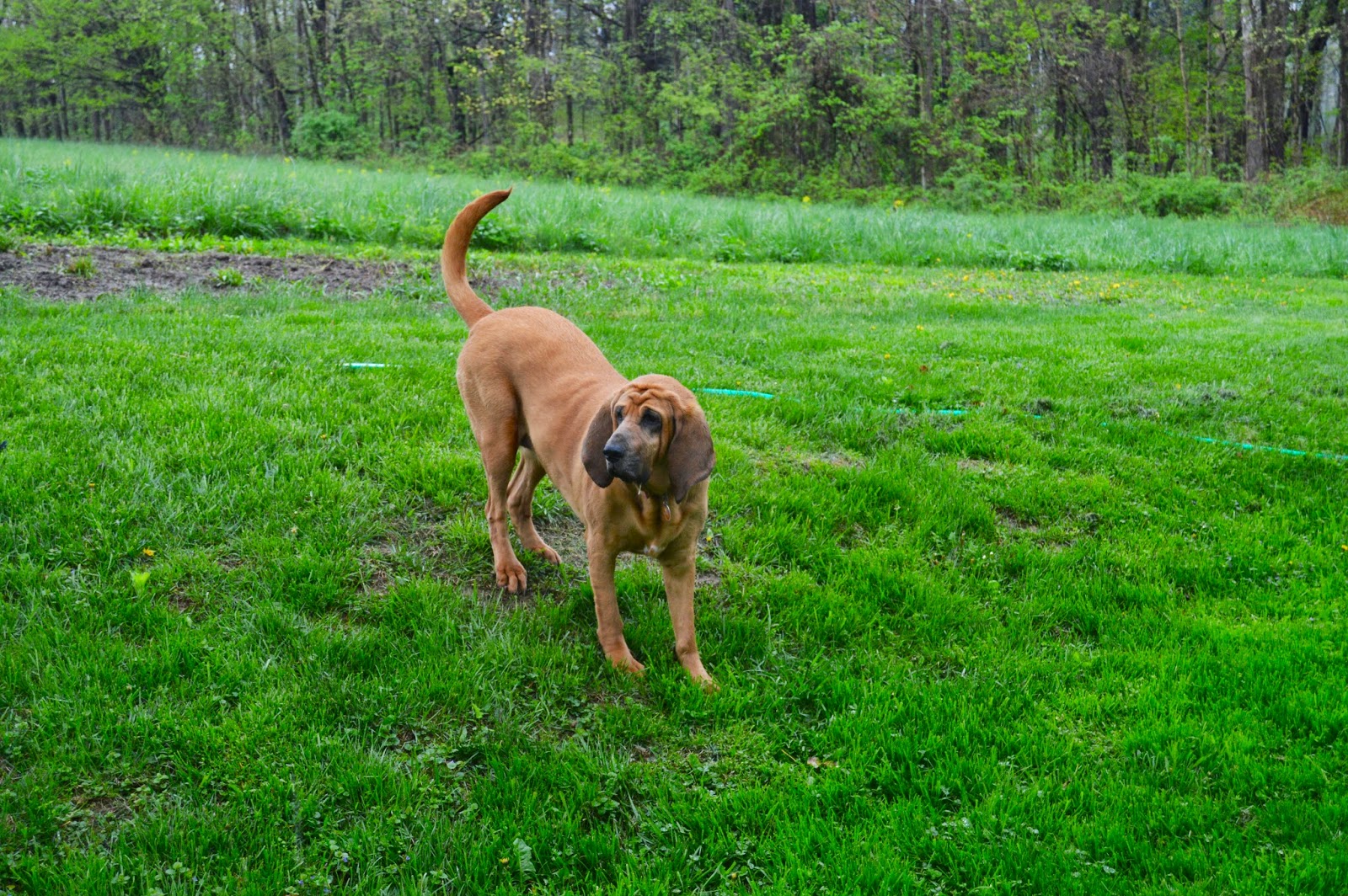 Sadie is normal, happy go lucky and obnoxious as always ... lately getting her aerobics in by chasing the rabbit in the yard to the back of the field into the woods ... then she returns to her yard. If it isn't a rabbit it's the squirrel that likes to torment her. She is strong pulling on the retractable leash when she locks into the scents that are more evident in the spring time.

Back in the middle of March I was doing some indoor minor repairs and general house maintenance, waiting for warmer temps outside. Then 'March Madness' started so there went most of the nights and afternoons from Thursday - Sunday. Once the college basketball champion was crowned in early April, the good weather showed up, so the yard work commenced.

After the first time of mowing the yard with my 22" push mower, on the side of a 80' hill, I found out really quick just how bad of physical shape the winter had put me in. My breathing and muscle soreness told me just how bad of shape I was. I was somewhat shocked as it felt worse than past years.

I had more plans this spring than just cleaning the yard, picking up the fallen tree limbs from the winter and mowing weekly or around the rains. This spring I wanted to do two things. I wanted to clear out a patch of land that had been overgrown with wild bushes, some honeysuckle, vines of some sort and really just brush junk. I also wanted to clear the bank on the side of my driveway, which consisted of dead 6' horse grass and a LOT of small tree starters that had trunks of 1"-2" in diameter. I didn't clear them last summer, so I had some work to do.

First with the land in back. I really didn't know this was my property until the neighbor had the field surveyed when he bought it a couple of summers ago. Of course I'm still not sure how accurate that survey was because soon after they started they had wood markers pressed against my truck door on the south side and metal stakes with orange flags driven into my yard on the north side inside my fence, not 5' away from the house.

A few days later after returning home from work, I noticed I had gain my original property line on the south side but had gained 10' on the north side of the house along with 10' more along the back. So I decided I'd cut those bushes out, at least burn them, clear the land and make it into a "camping" spot. I would build a fire pit, sit out a couple of chairs and spend some nights out there with a fire and a sky of full of stars.

It didn't get that done last summer due to laziness, so this spring was my chance. I started with this in March. Once the snow melted and things dried out, I burned it. That took out a lot of brush but still left me with a lot of vines that had taken root. I pulled out what I could, then cut them out of the ground. There were some trees where I cut with my hand saw, down to ground level. 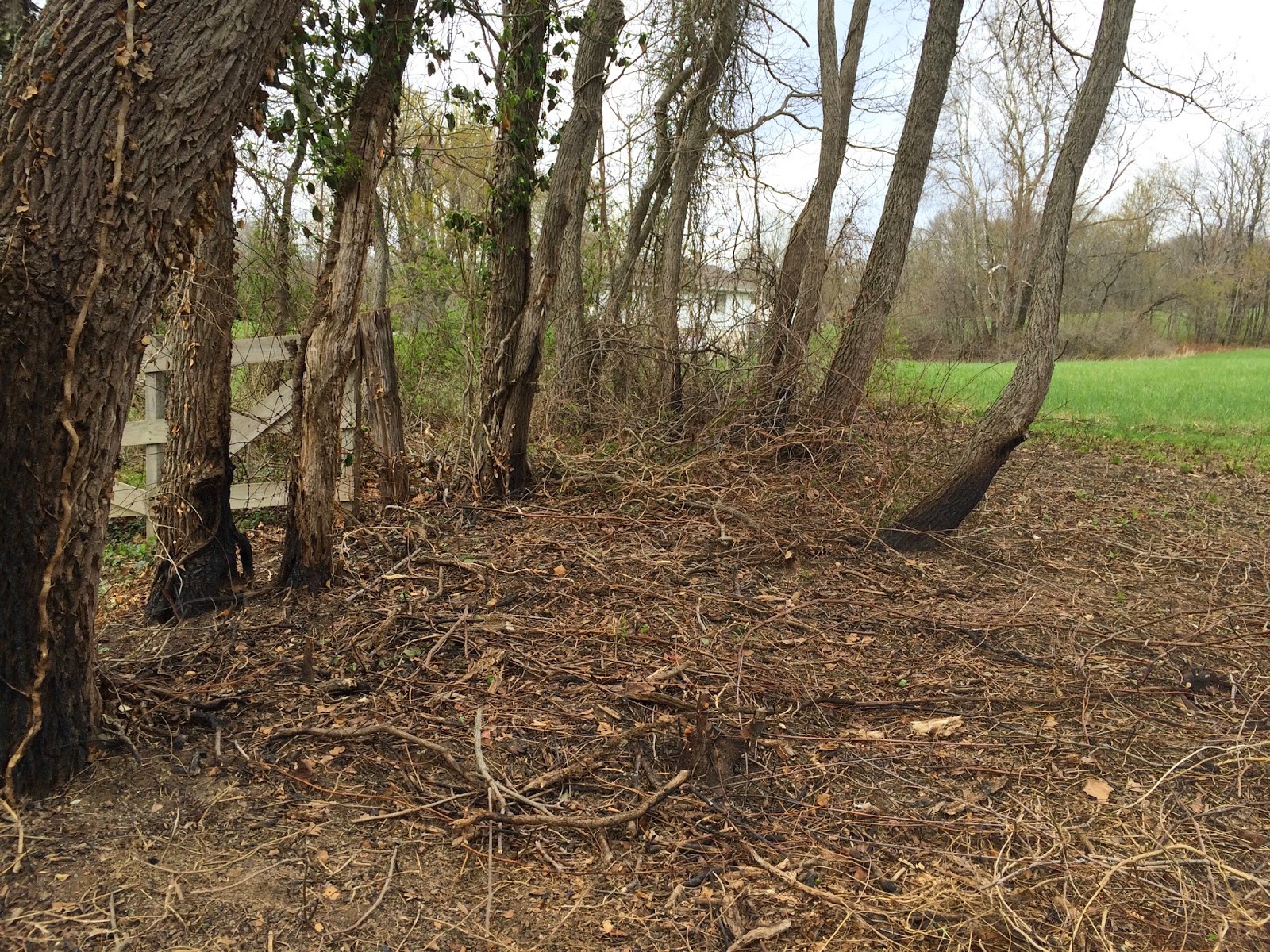 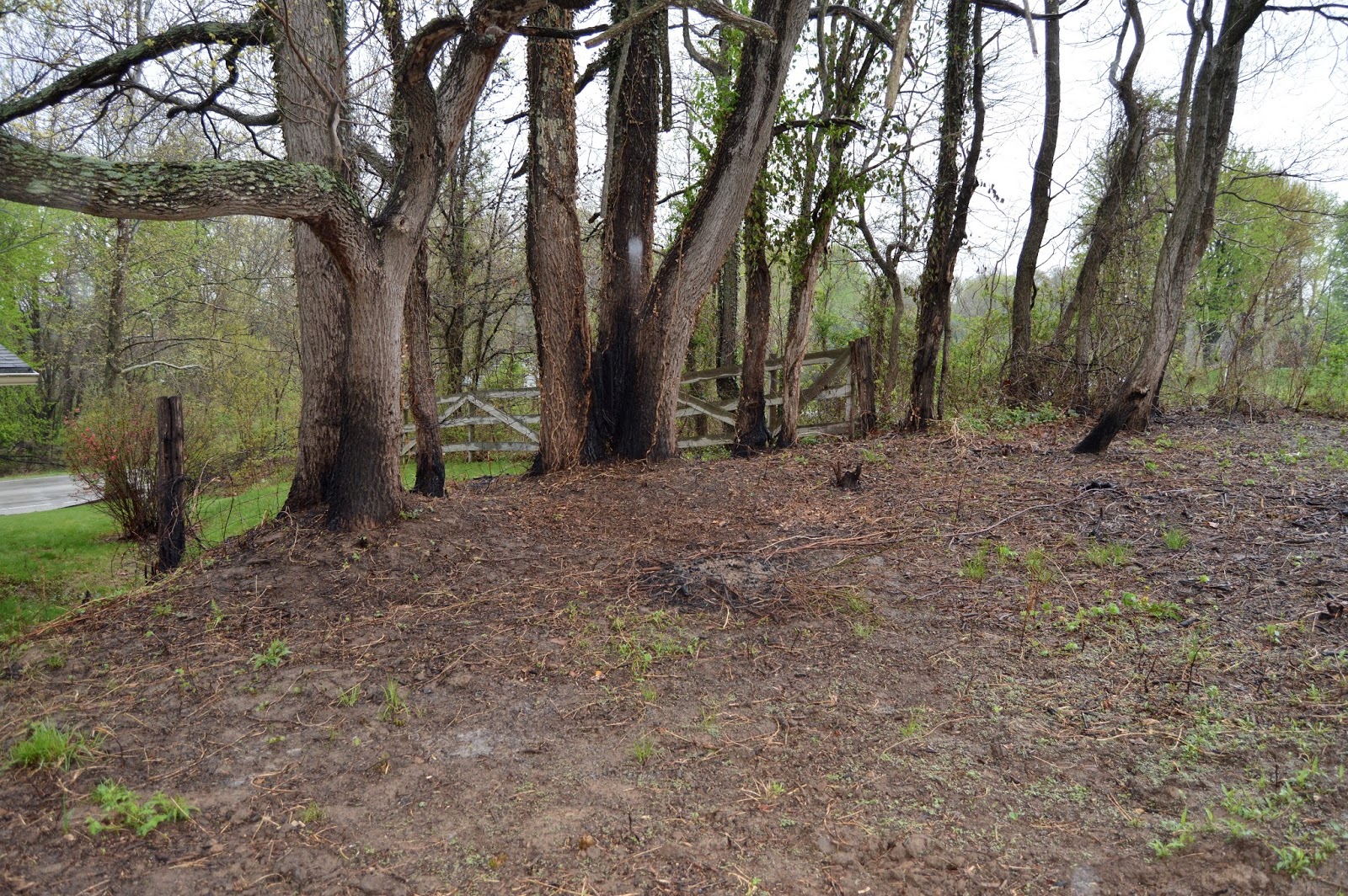 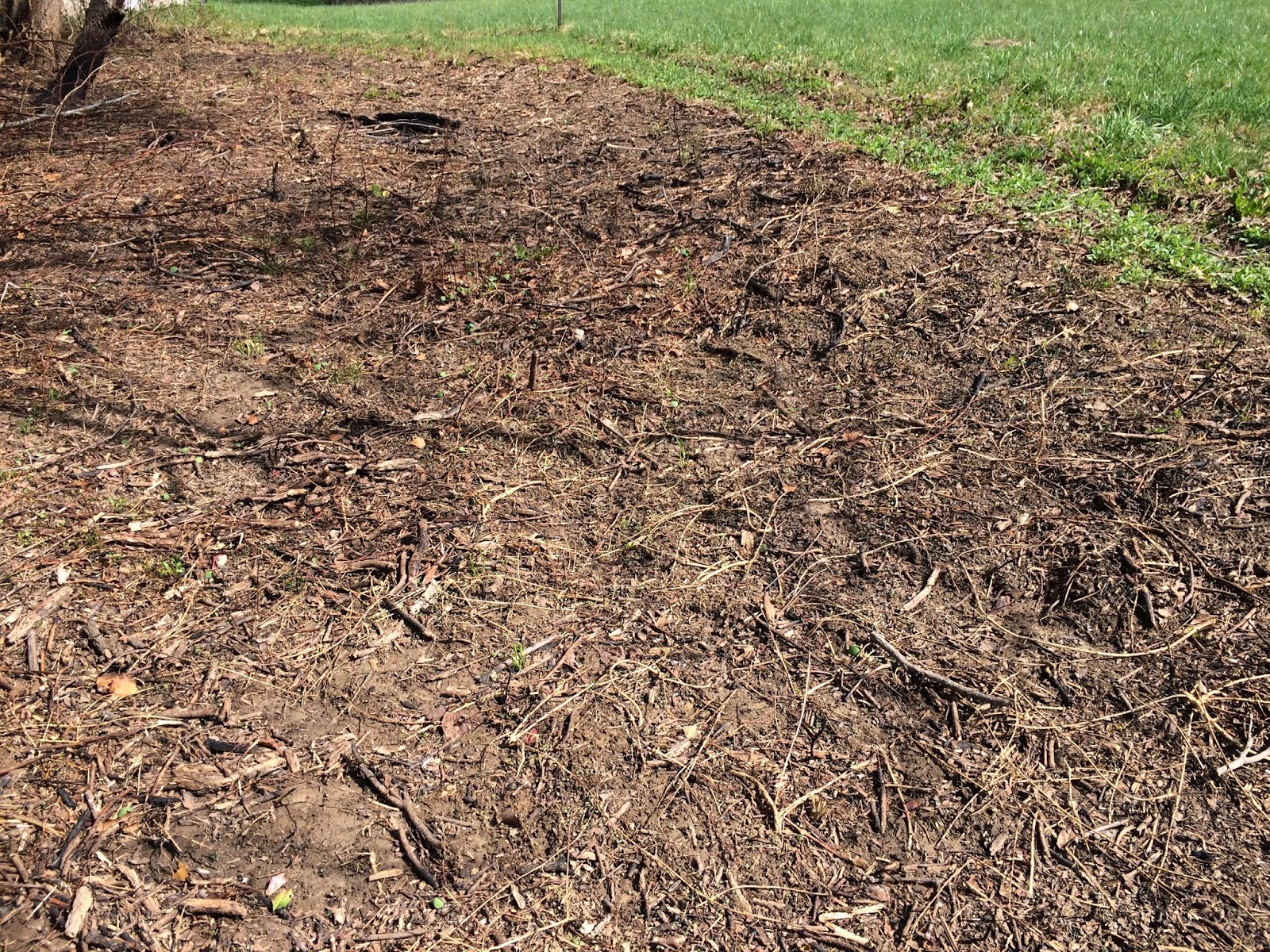 I did half of the area, raked and leveled the land enough to plant grass seed. Just the bending over to pull roots out of the ground or to kneel down to cut small tree limbs put more hurt on my body than the lawn mowing did. My nights ended with me laying on tennis balls, on different pressure points on my back. Cheaper than a massage and still will point out all the bad parts of the back. 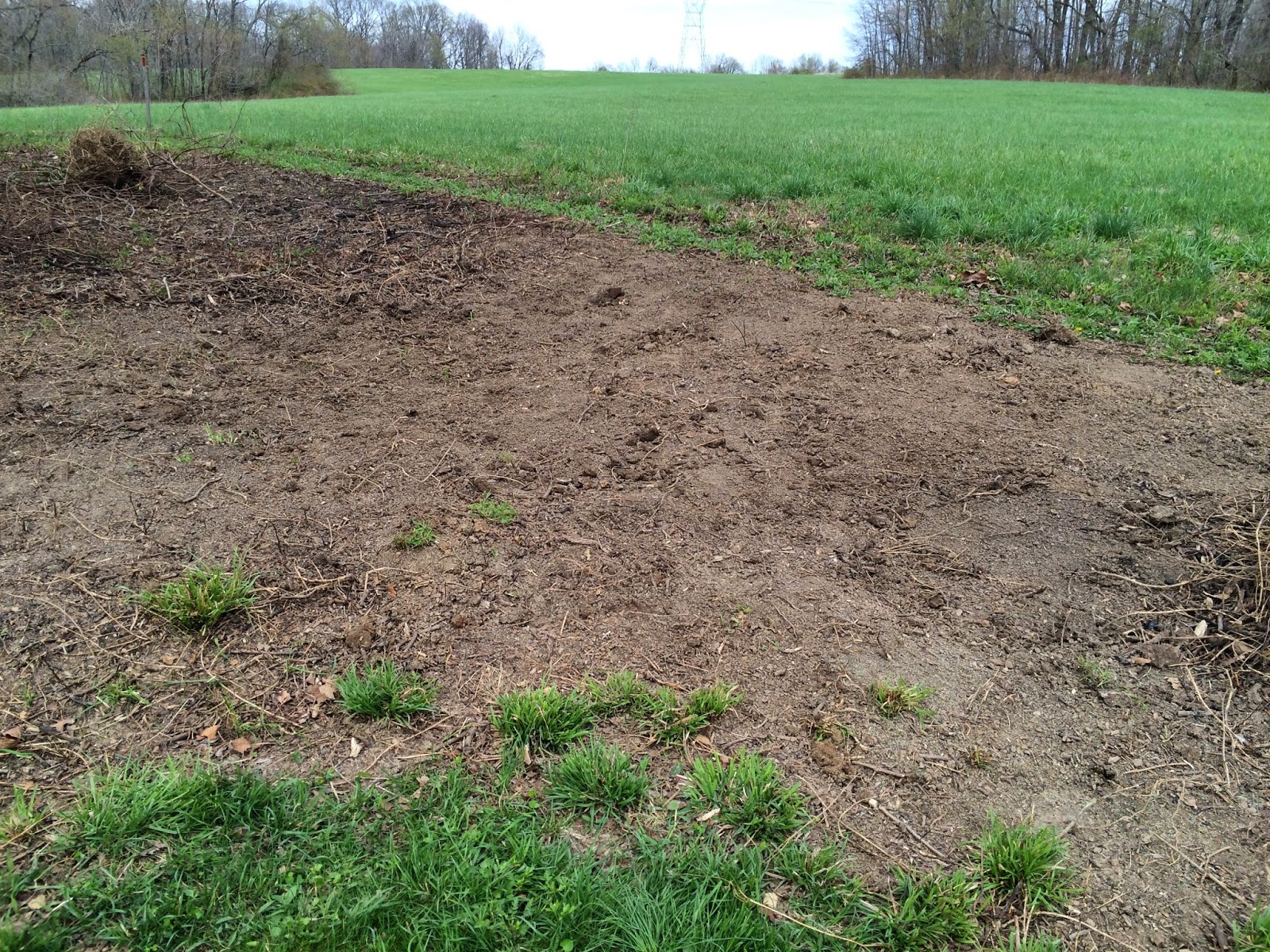 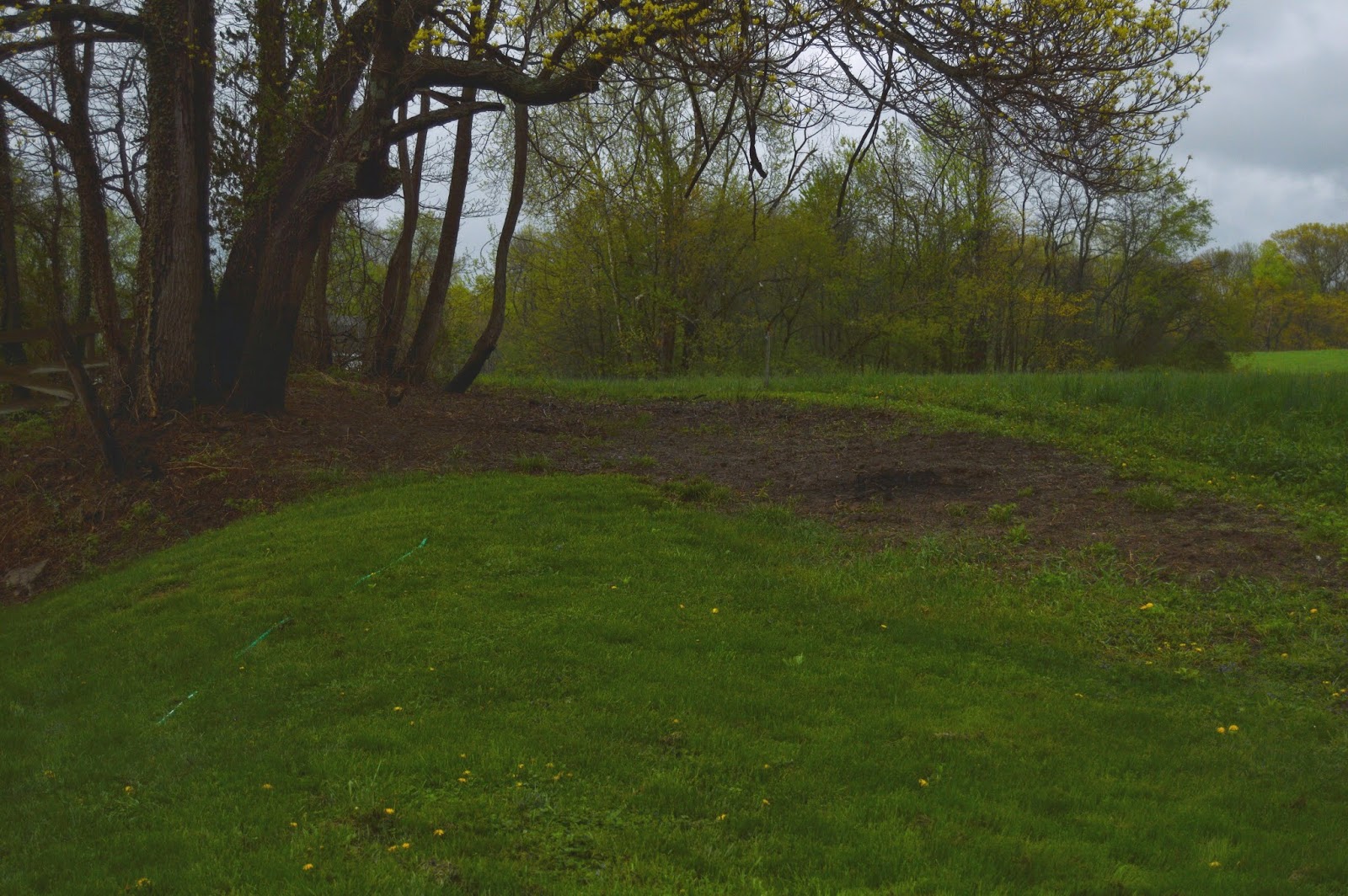 Still with each day bright and sunny, my focus on the job at hand would fade. My focus would move on to the next job outside even though I had not completed the land in back.

So last Thursday I glanced at the bank along my driveway and decided it was time to clear it. I started by cutting many of those small trees with an electric handheld saw. Since I had sold my old Chevy truck last spring, trying to downsize the auto herd, I found out the only way I could remove those 10' trees were by hand. That meant I had to take as many as each hand could hold, walk up the hill more than a few times and haul those 1" & 2" trees back into the woods behind my house.

That took time. That also was a workout climbing that driveway going up the hill.

With tree limbs dead from previous years, dead horse grass stems and the usual wild brush ... my urge to build fires came back to me ... so I lit the bank on fire, with the water hose turned on and nearby in case the fire wanted to go further into the woods than I had planned.

There were no problems with the fire, except the one spot that burnt my fence. That took place as my neighbor and I were discussing life in general. By Saturday afternoon I had raked all of the dead leaves, branches and anything else my rank could find, down the bank into a burn pile. 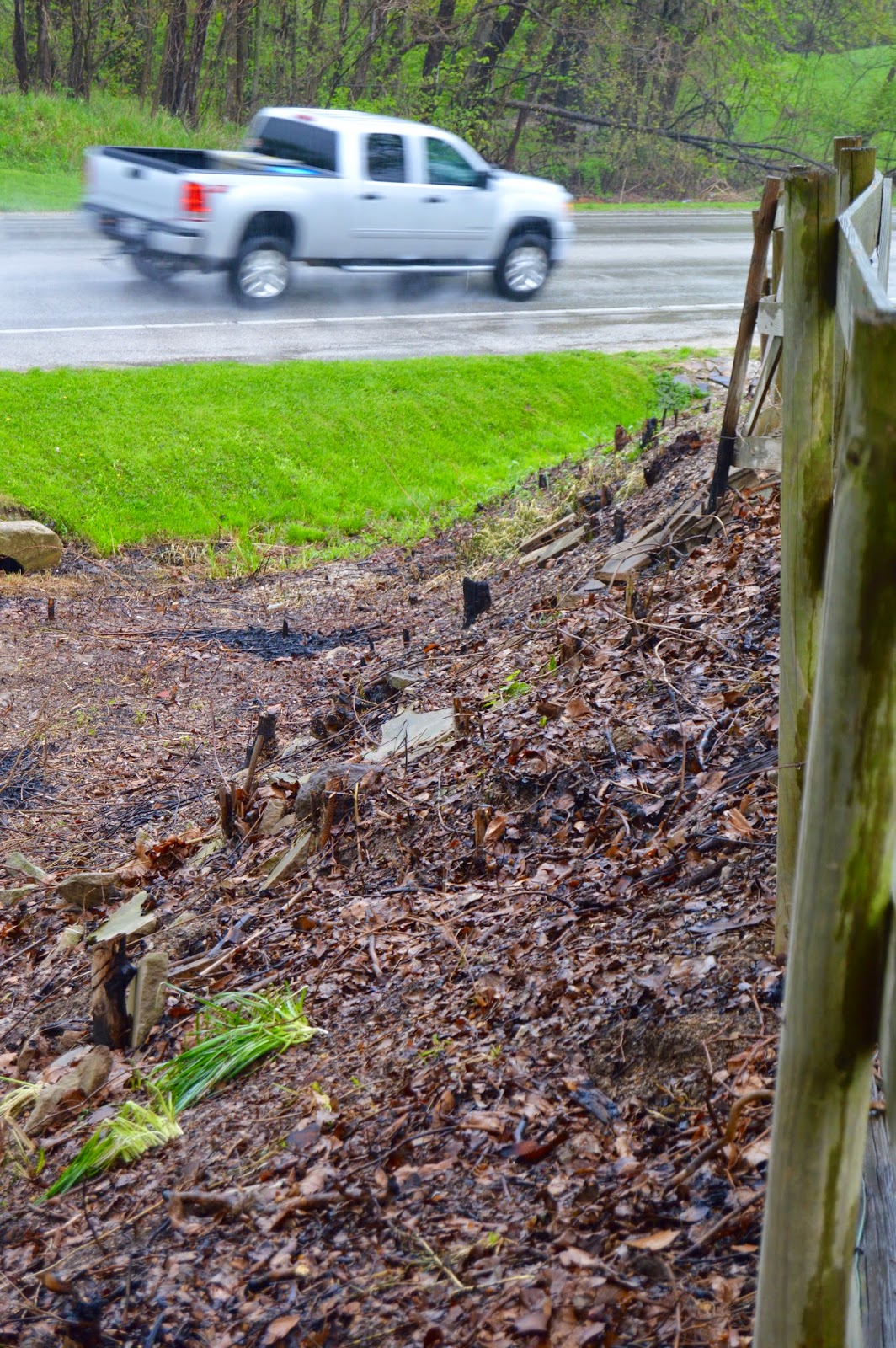 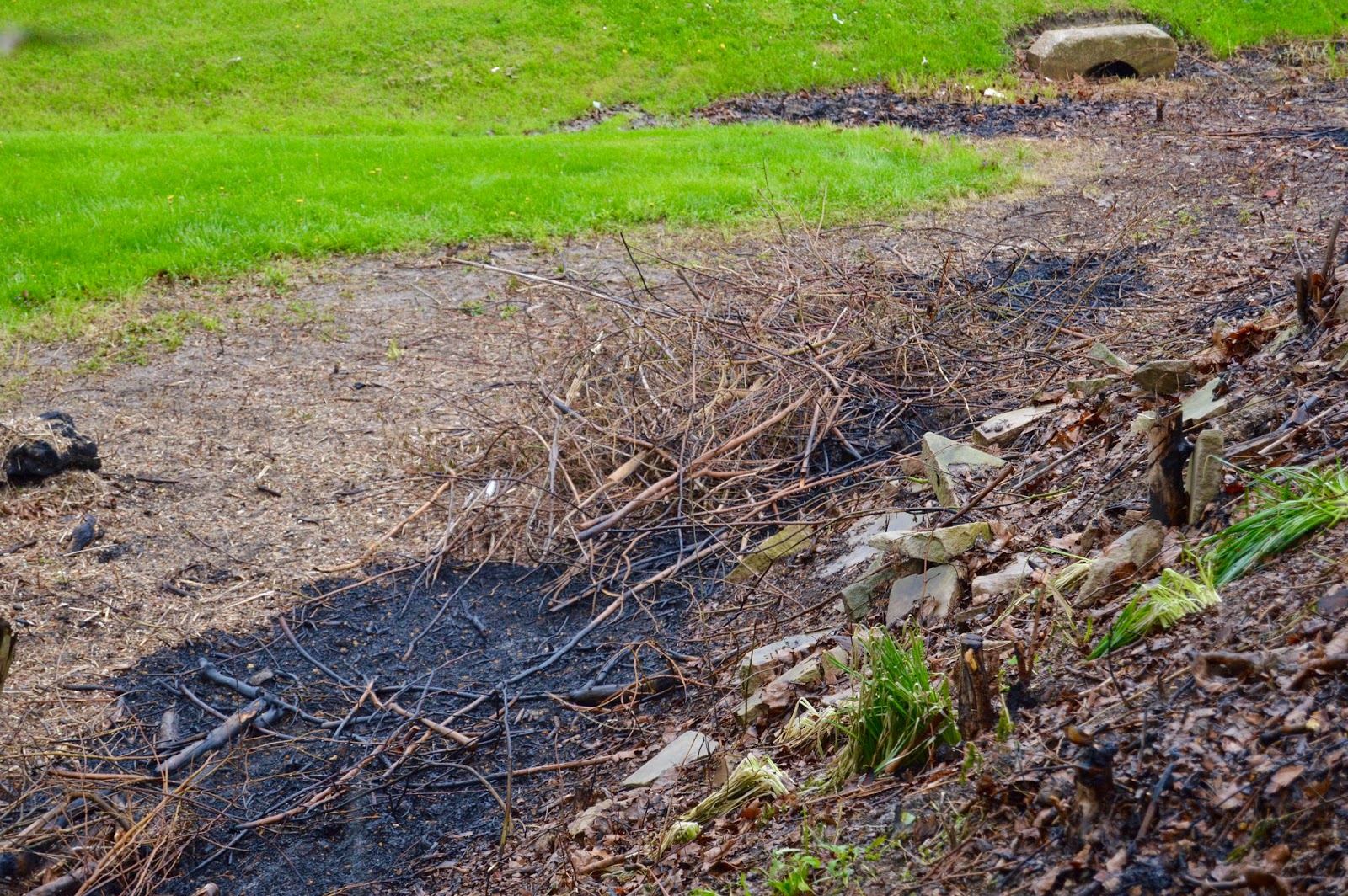 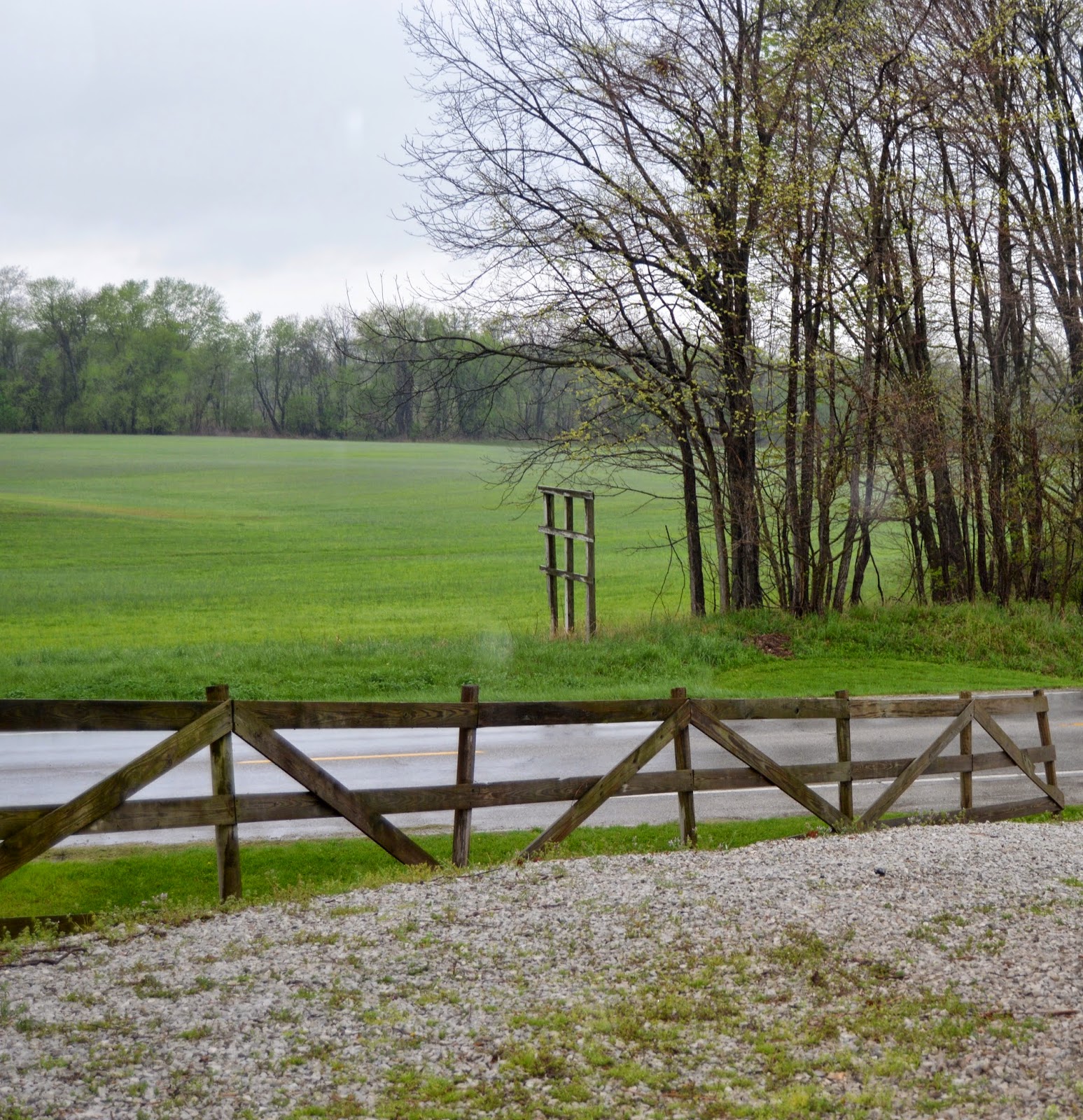 Some of the trees branches were too green and were not expected to burn but I was planning to burn as much as possible. This will now have some green wild stuff start growing to cover the bank. It will also prevent those small trees from growing taller and harder to cut down, that would disturb my clear southern sky for my Directv and Internet Satellite dishes.

With rain forecasted today and Monday, I will get a break from killing myself clearing land. On Tuesday I will be back in the back area to complete the land clearing and plant more grass seed.

The land that my house is now on plus the field behind my house use to be my great grandfather's property. As a kid, my dad use to farm this property with a team of mules. He remembers putting this roll of barbwire fence on the fence post sometime before 1944. I found the barbwire and a rusty metal fence still attached to the post after I cleared out the brush and overgrowth around the fence post and trees. 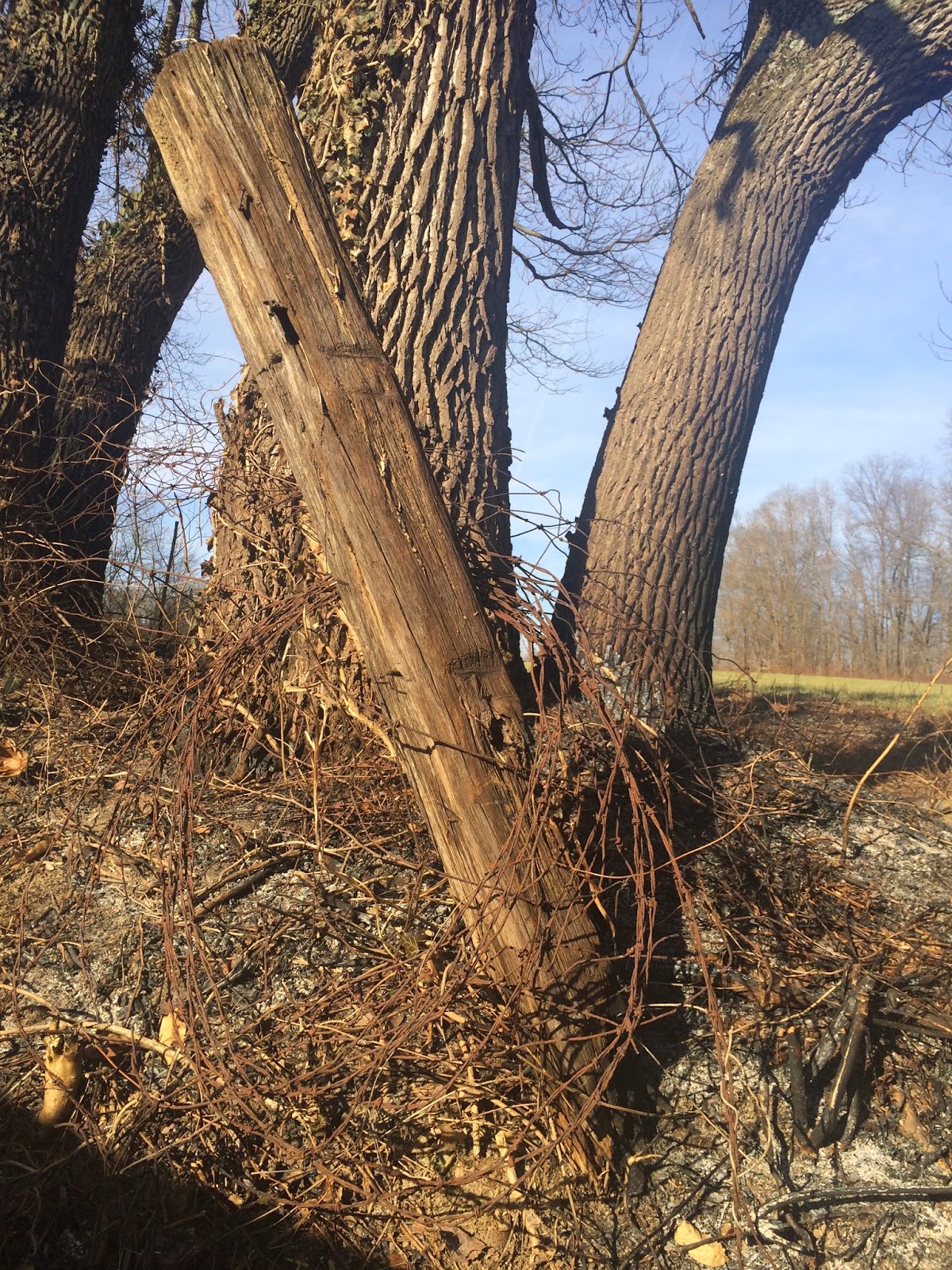 Well the rain has stopped, the sun is trying to peek out from behind the clouds and Winston is whining to go outside. I'll start blogging  more often and hopefully Heidi will be willing to have her picture taken outside, where I can post some updated shots of her.
at April 19, 2015