A New Trip Is Being Planned 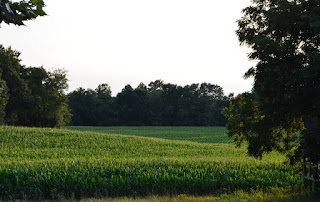 As the title says, something is being planned and before long the hounds and I will be heading west again with plans to stay longer than we did in June. Cutting that trip short turned out to be a good thing. I was able to make some adjustments to my storage area so Winston and Sadie will have more "leg room" on the next trip. Heidi has recovered from her indigestion.

The biggest thing that was accomplished so it will not be lingering in the back of my mind on this next trip ... I finished all but one thing on my house "to do" list. That list bugged the heck out of me during our 3,000 mile trip. As I kept marking off more and more things on the "to do" list as being completed these past few weeks since being back, I was coming up to a point of making a decision.

The urge to travel was taking over again, as I planned when I returned. Also the thought of packing up and moving west did occur to me enough for me to make a list of things to do in case I did decide to leave the area for good. As my adviser has suggested over the years, I need to get more "road miles" under me and the hounds before deciding whether to make a life altering change, such has selling my house and moving. I agree with that ... even though at times I have problems being patient when my brain locks onto some idea, such as having the urge to sell everything and move west.

So plans for the next trip are being made or kinda being made. Since retirement I've never had a schedule, nothing planned like from point A to point B ... so I find it hard to plan out a trip with scheduled stops. I was in such of a hurry on my June trip to see Colorado again, where I had lived in 1993-1994 and Utah ... that we drove straight through from Indiana to get to those two states as soon as possible. In previous years I had always sped through Utah when driving from Washington to Indiana, so it would be a first for me to see some of Utah up close.

This next trip I have an idea where I want to go but I'm not sure I want to take the shortest route. In fact I am not sure I want to start heading out in the direction toward that destination, but I am pretty sure what highway (no freeway/interstate) I want to begin with. I'll get into those plans in a later post.

Currently I am writing this in the middle of the day because I am waiting for the grass to dry enough to where I can mow the lawn before the next rain this afternoon. As you can see in the photo at the top ... from the green and taller than normal corn for this time of year, the rain in the "tropics" of southern Indiana has made everything green. My lawn has never looked better near the second week of July. Yet, that means a weekly mow in and around the rain.

The field behind my house is still not mowed and baled simply because there has not been enough time between rains to dry it out enough to have heavy farm equipment mowing the field ... so Sadie has decided it is a place she can hide from me. She thinks she is hiding not knowing or wishing I can't see her. She will stand still at different parts of the field and act like she cannot hear me call her name .. while looking right at me. 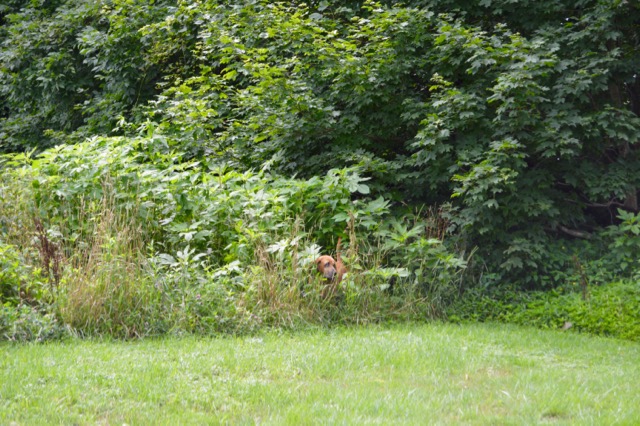 This morning Winston is relaxing on "his patio", enjoying the cool temps and preparing for his afternoon nap as I mow the lawn. Heidi is MIA for the photo op ... of course ... because she is inside sleeping in her big leather chair. She gets outside but never stays long ... she is not curious about the yard or field. As far as blogging on the trip ... internet wifi connections will determine if and when I blog. I don't see the need to pay for internet service while traveling if my trip is going to be only for a couple of weeks to a month. So photos and blogs may be few and far between during our travel time. I found last trip I had little urge to blog. By the time camp was set up, the hounds were fed, walked and I could just sit in a chair enjoying the scenery ... computers were the last thing on my mind.

To give Winston and Sadie more "leg room" in the back of the FJ, most everything packed in the back last trip will be moved to the roof. I'll be picking up my roof storage tomorrow at REI and having it installed. 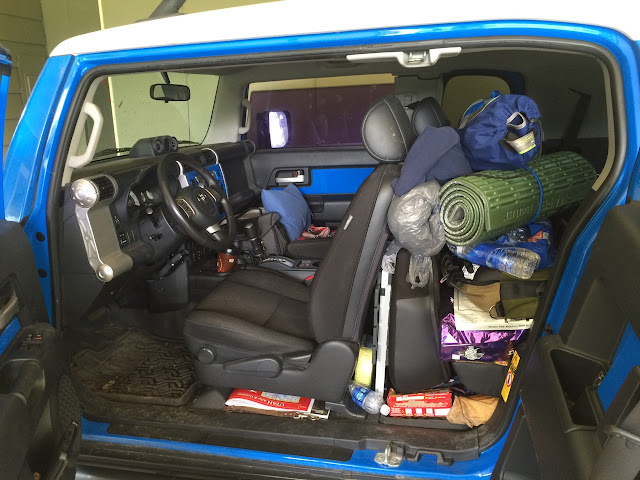 And This (Except Water Jug) 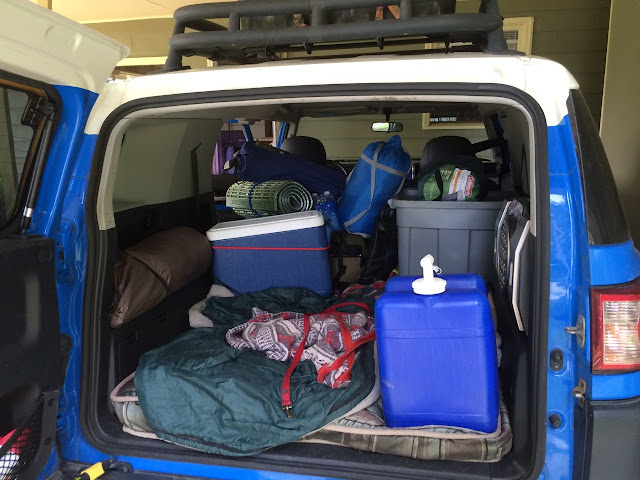 Will Move to This

So as the July temps finally arrive in "the tropics" of Indiana ... we hope to miss them as the hounds and I start our next journey west.

I've never thought of taking photos of every barn in my rural area ... but Al over at the Bayfield Bunch has put up a new Flicker album of photos he has taken in his neighborhood ... you can see a great collection of barn photos clicking here.