Where Did All This Motivation Come From? 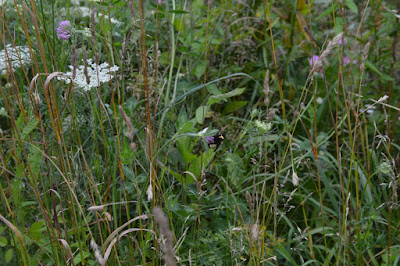 I believe you can see from the picture on the left that my camera has been fixed and returned in record time. If not, look closer at the center of the photo.

The Geek Squad at Best Buy, where I bought the camera, shipped the camera to the Nikon service the following morning and it arrived at the repair facility two days later. Along the way the notified me by email where the camera was.

While I was sitting at the kitchen table yesterday on July 6 I noticed the UPS truck stopping in front of the drive. With the long July 4th weekend, my camera shows up a week after I turned it in. Until I used it, I forgot how nice it was to see an automatic focus at any distance and with either lens. More photos to follow in the days ahead.

For one reason for more photos, I'll have more time again during the day to go out and take photos. During the last 8 days I've been working most days outside on my "to do" list. Plus the lawn mowing around the days of rain. It's been nonstop and on occasion I've done things I didn't have listed but noticed as I worked. It's just the way my brain works at times.

I believe in my last post over a week ago I mentioned a list of "to do's" for my house. Some of the things listed were things I've been wanting/needing to do for YEARS!! A lot of these things are not an annual thing. It was amazing to find out that when I actually started the repair just how little time it took. I've completed 11 of 13 items that were listed. I am down to my last two tasks and one I have no urge to do.

I have a crawl space that looks like a moon crater. I am able to walk around and will have to bend over at most of the time but it's not like I have to crawl on the ground under my house. So it should be ok and the hardest part might be getting to the entry window, which is now hidden behind the Yews I planted a few years ago.

You may be asking what kind of things am I talking about. Is it things that all homeowners have to go through? I'm not sure but I think I had a couple or a few things unique to my house. It ranged from washing windows inside and out around the 1970's style storm windows. (time consuming). Or with the RV washing brush with the extended handle, I was able to wash my house's siding, plus the overhang in less than one hour.

I missed a small spot that I didn't see until everything had dried, but it was good to see just how clean my house siding was after the siding was washed. When you live 80' from a busy highway and surrounded by fields of corn, soybeans, or hay ... dust/dirt tends to accumulate. Also in this area there tends to be more cobwebs attaching to different parts of the house, plus a couple of wasp nests.

It's common from the severe winter temps, but I had a few places on the overhang and the trim around my old windows, where paint had peeled. Those spots were scrapped, sanded, painted with primer and then trim paint. After a few days and the paint had completely dried, you could not tell where those spots were. The paint's color blended well even after 5 years.

I still had time on Sunday, forgetting what day of the week it was, to mow the lawn and trim the hedges. Since the Yews have grown into the desired height, it will be pretty easy to keep them trimmed from now on. I thought the traffic pattern on the highway was different but thought it might be from the holiday weekend. It wasn't until later that night when looking at my iPhone where I noticed it was Sunday ... LOL.

On the day it rained during the week, I worked inside and hand washed every inch of every wall inside the house. I won't go into details but the results showed it was time to do that task. It was shocking to say the least.

Of course as I have stated before, as I am doing things I find other stuff to do and in some cases will do them immediately. That's never a good thing. For example, while I was walking around painting the trim color over the spots I had repaired, I noticed the insides of the two doors on my shed were still white from the original paint job 15 years ago. So I end up painting both doors the same color as my current trim color.

That right there added a couple of hours to my day and away from something else ... but at least it looks good. There are also "hazards" of getting things done and looking good. I pressure washed my carport concrete floor Sunday morning after washing the house siding. Today it rained so much and so hard all day, that water that had flooded into the carport and flooded a lot of that clean concrete floor ... add in the number of times that Sadie ran back and forth through the standing water, it's back to a normal concrete floor.

As I was working inside I realized that at least one room needs to be painted. I like painting so it should not be much of a problem. It will take longer to move computers, bicycles, and desks out of the room or to the center of the room so I can walk around and paint the walls.

Heidi continues to improve. It's a slow process but hair is growing back to those spots that were raw months ago. Her stomach and armpits are back to normal skin texture. She would eat non-stop of I would keep giving her food, so hopefully that will lead to an increase in weight. 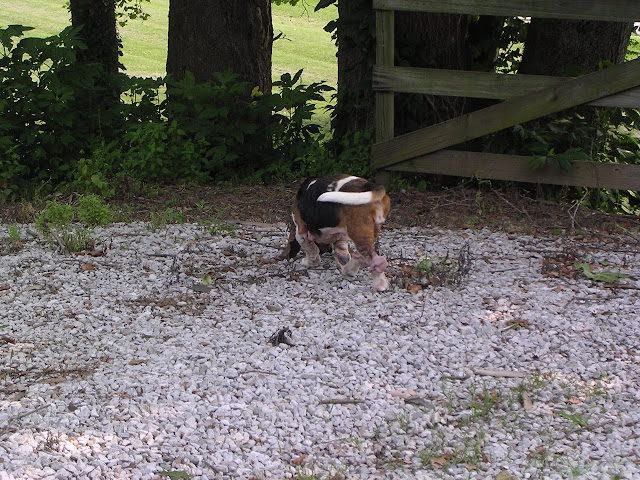 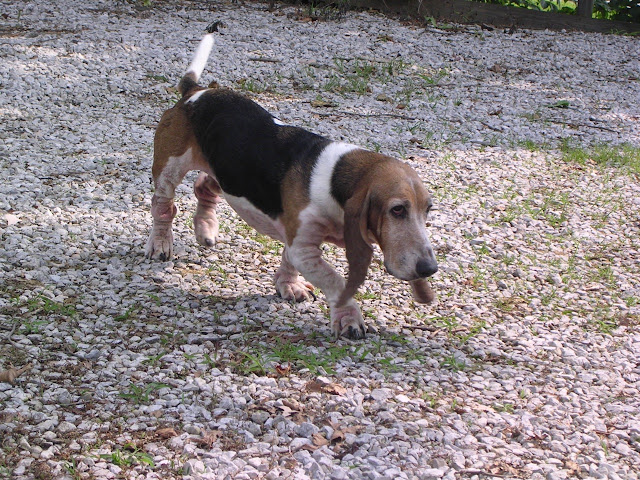 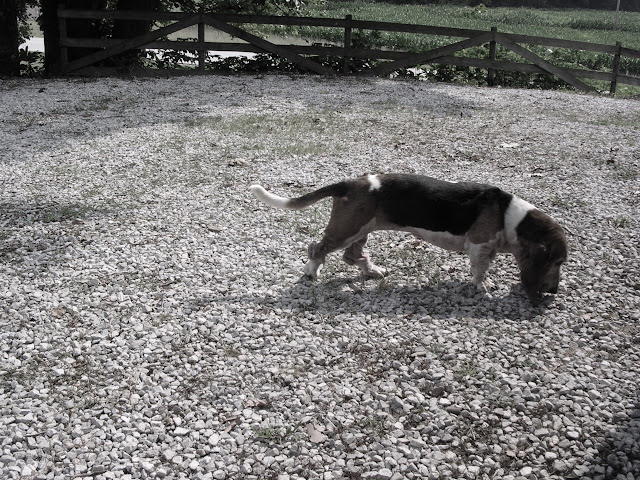 Winston is just Winston ... everyday is a laidback holiday to him. I have noticed a little stiffness in his back legs, lower back ... so I have started giving him buffered aspirin. 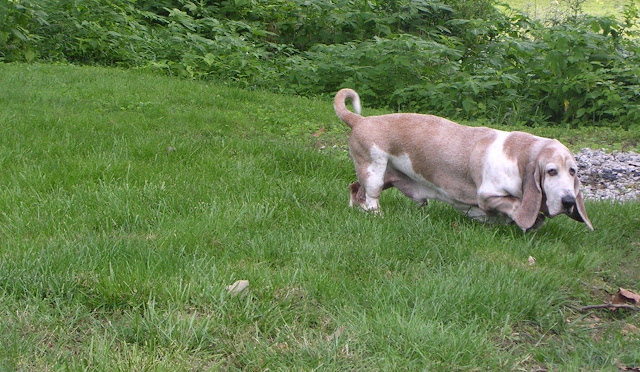 Sadie was doing some surprising things this past week. She wanted to stay outside while I worked. So I let her roam off leash, as I worked outside. Unlike a bloodhound breed, where some say they always need to be on a leash, there were different times where Sadie laid down in the grass and watched whatever I was doing. Since Winston kept wandering off, he had to go back inside the house. 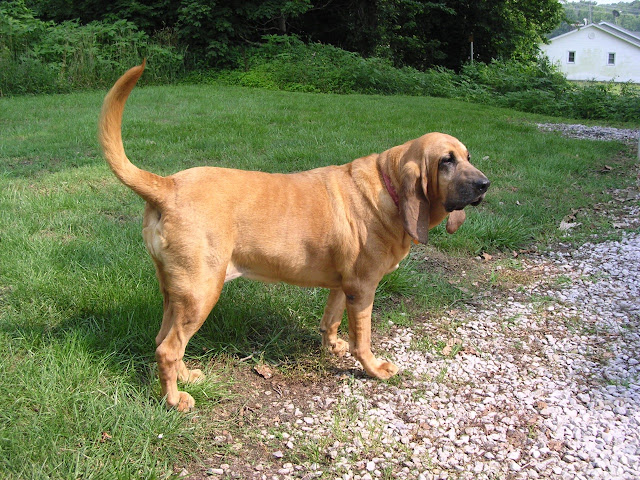 I may have found out why I never got anything done in past years in the month of July. The Tour de France started July 4 and is on tv live every morning at 8am. Some of those races are 3-4 hours long, so that would take up most mornings. Three weeks later it would be too hot to work outside which leads into football season. Therefore a lot of the thing on that house list were never started.

Now, I check the internet while I drink my cup of coffee, shut off the computer, work outside during the day then watched the TOF at night at 8pm. That seems to work pretty well. It keeps me under my internet data for the month, I complete things that need to be done and I still see the day's race at night.

After my crawl space task ... the only things left to do on my list are things as if I were moving.