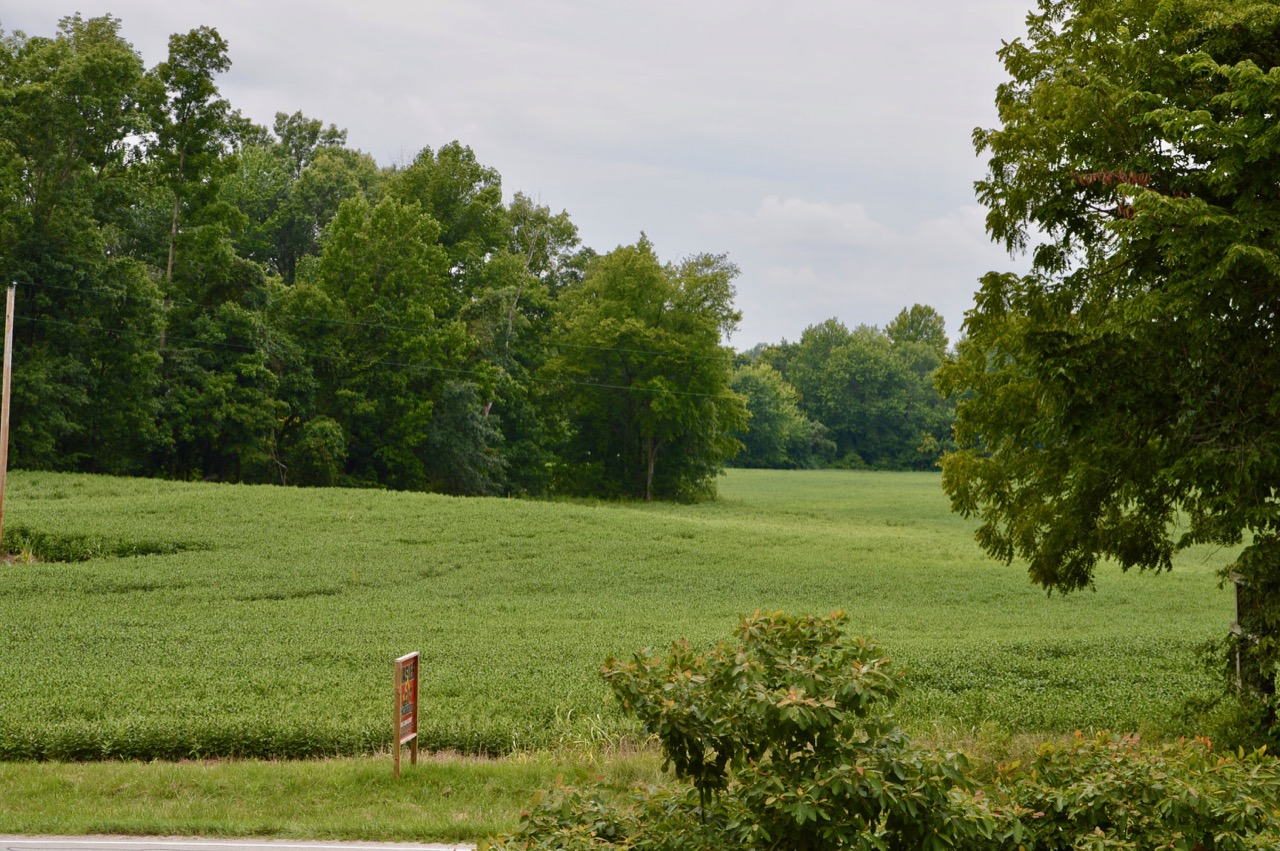 The day may have started a lot later than normal but as you can see we have another thunderstorm headed our way that is about 30 miles west of us while I start this post. When I woke up this morning to let the hounds outside and feed them breakfast, it was pouring  rain hard outside so I wasn't sure if the hounds would go out for their first trip of the day. Heidi stood by the door barking for food while the bloodhounds had to go bad enough they sprinted to and from the field. They were at the door waiting for me by the time the breakfast kibble had been poured. 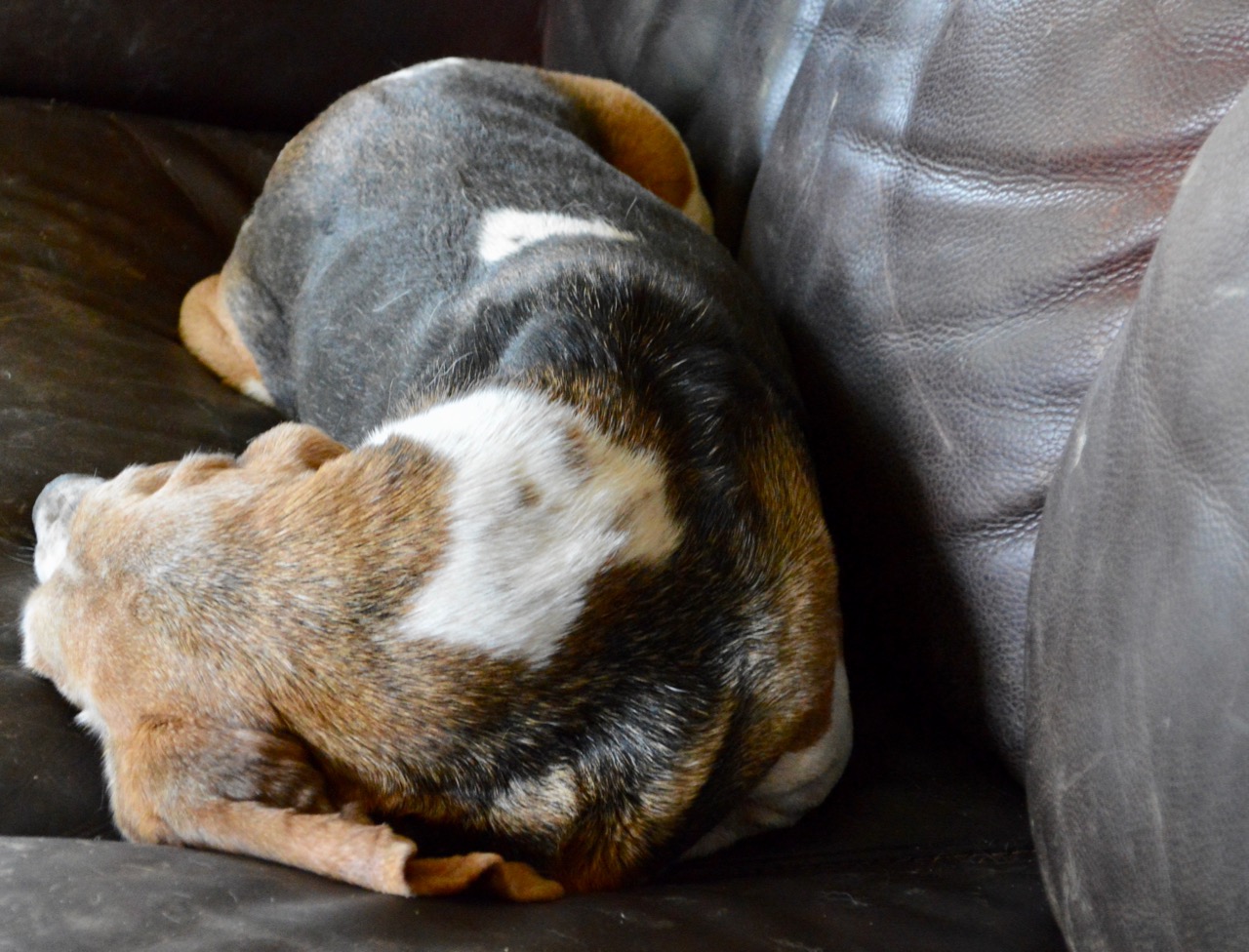 What better time than to catch up on some sleep with it raining that hard. I was up past 2am just to start the latest macOS beta update. It will download and install after I click the button for it to start, so I no longer have to stay up through the night to click the different screens for it to continue. Between 2am to 8am the update can use that free batch of data HughesGen gives me every month. With the update for the iMac and my laptop computer, it took a little over 6Gb of data for both computers. Besides that it was a restless night of sleep filled with the strangest dreams. My Garmin VivaSmart watch told me I was awake for a total of 20 minutes during the night. That's a lot of tossing and turning.

I decided if I showed a dirty leather couch with Heidi sleeping once I could again. This is Heidi around 2:30pm today as the bloodhounds and I took our first walk. She never does a lot of tossing and turning when she sleeps, it's all solid sleep with a few dreams of running at times. 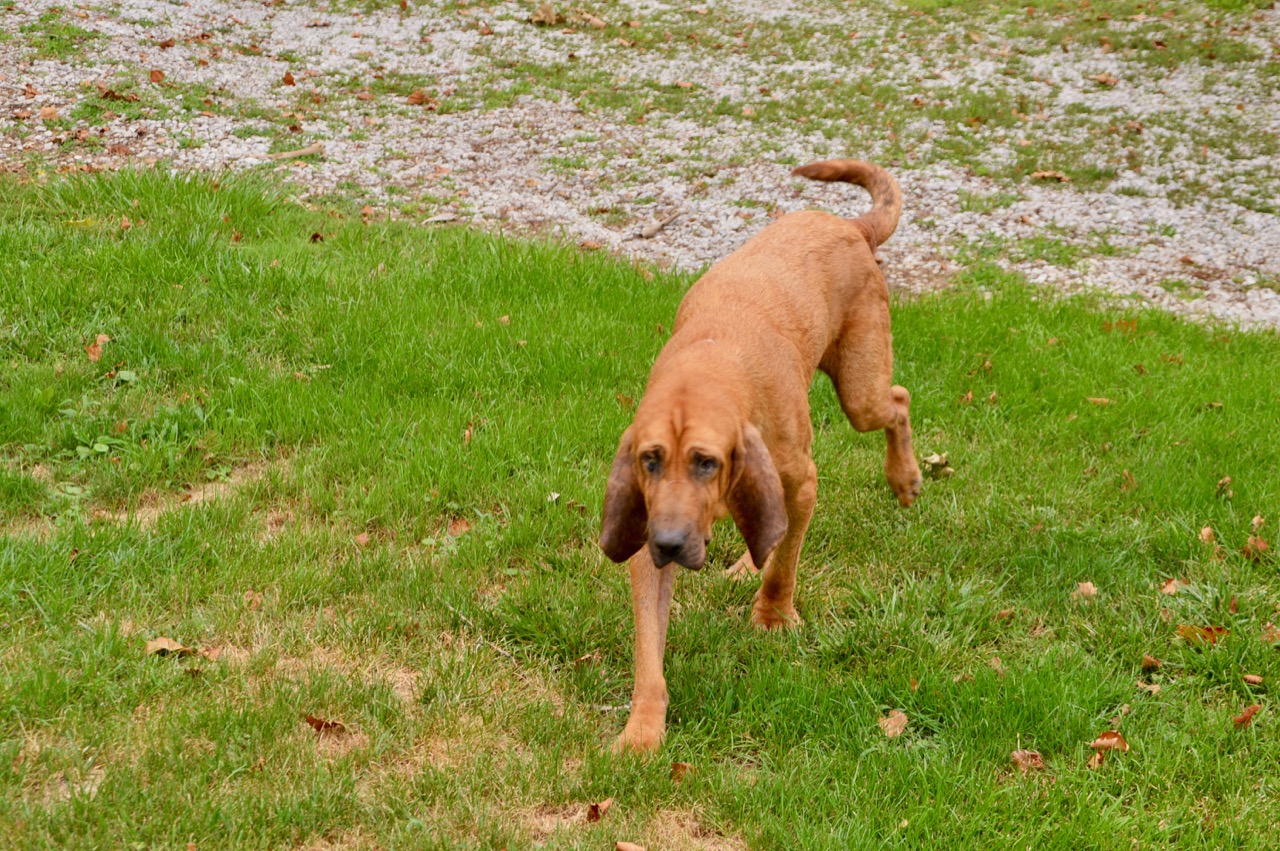 For some reason Stella was ready to get the walk started today. She didn't hesitate by sitting at the corner of the house nor did she try to fake me out by heading north instead of east with Sadie and I. She stepped onto the wet grass and marched toward the path, with a purpose, whatever that might be. 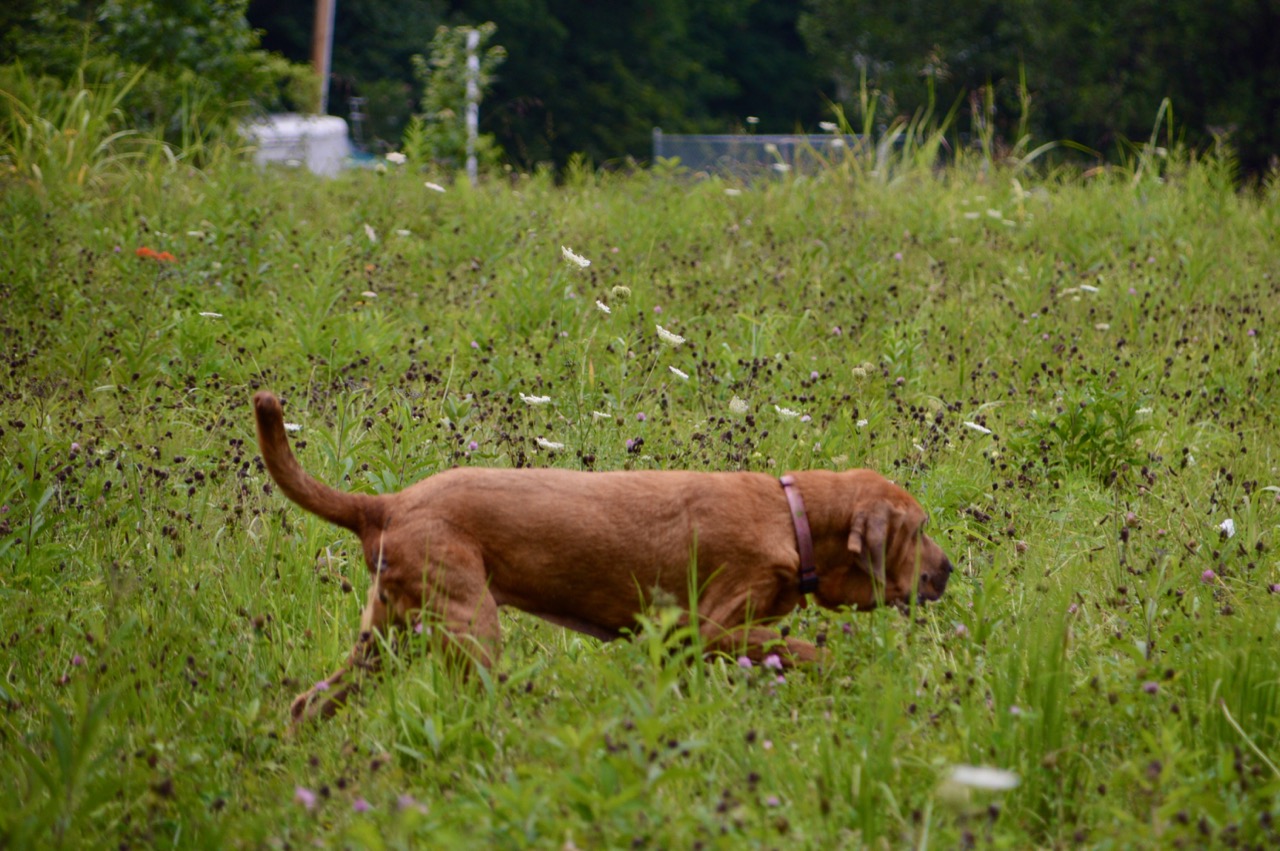 With a quick left turn she was heading for the center of the field behind the house looking for that perfect spot like she always does. It has made the walks much easier to do with her following the path and at times leading Sadie and I on the walk. Not a lot of verbal herding has been needed the past week and a half. 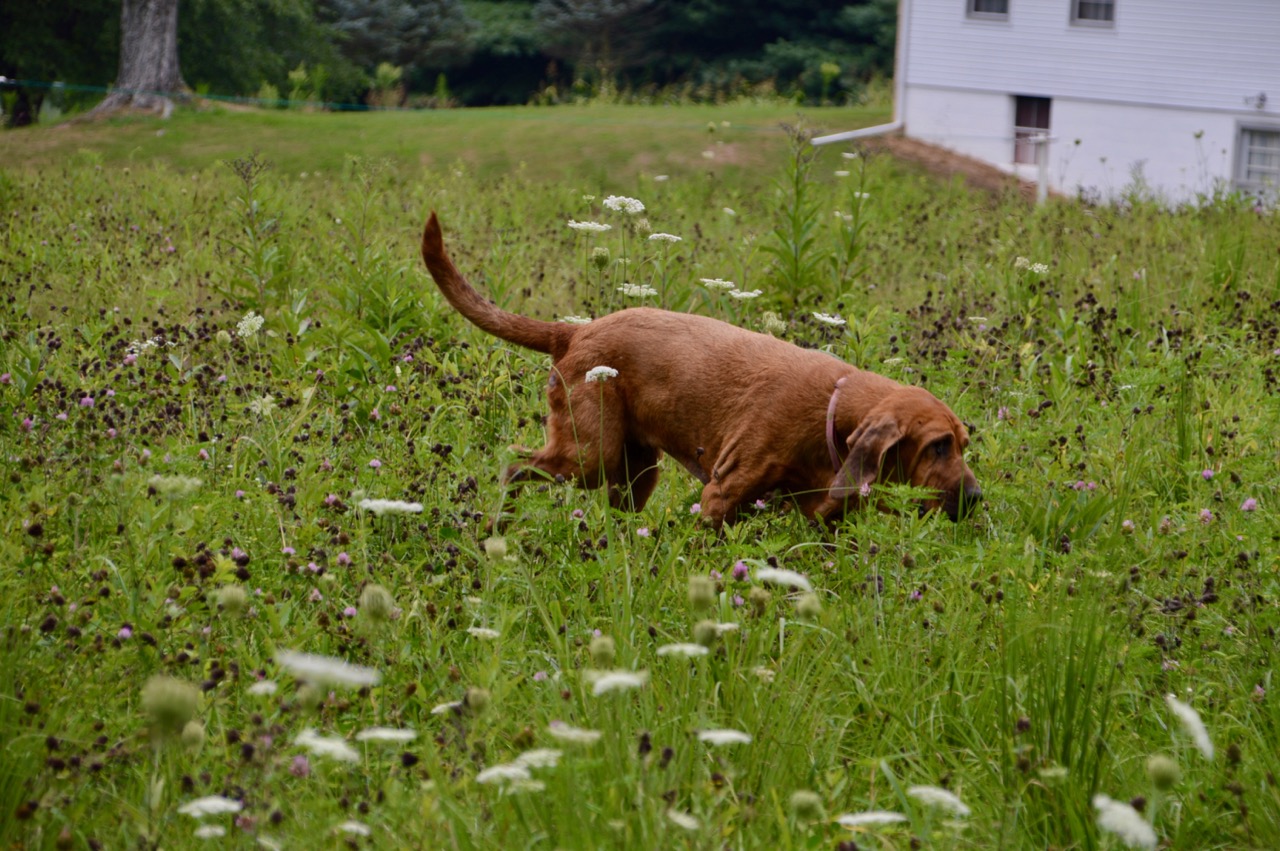 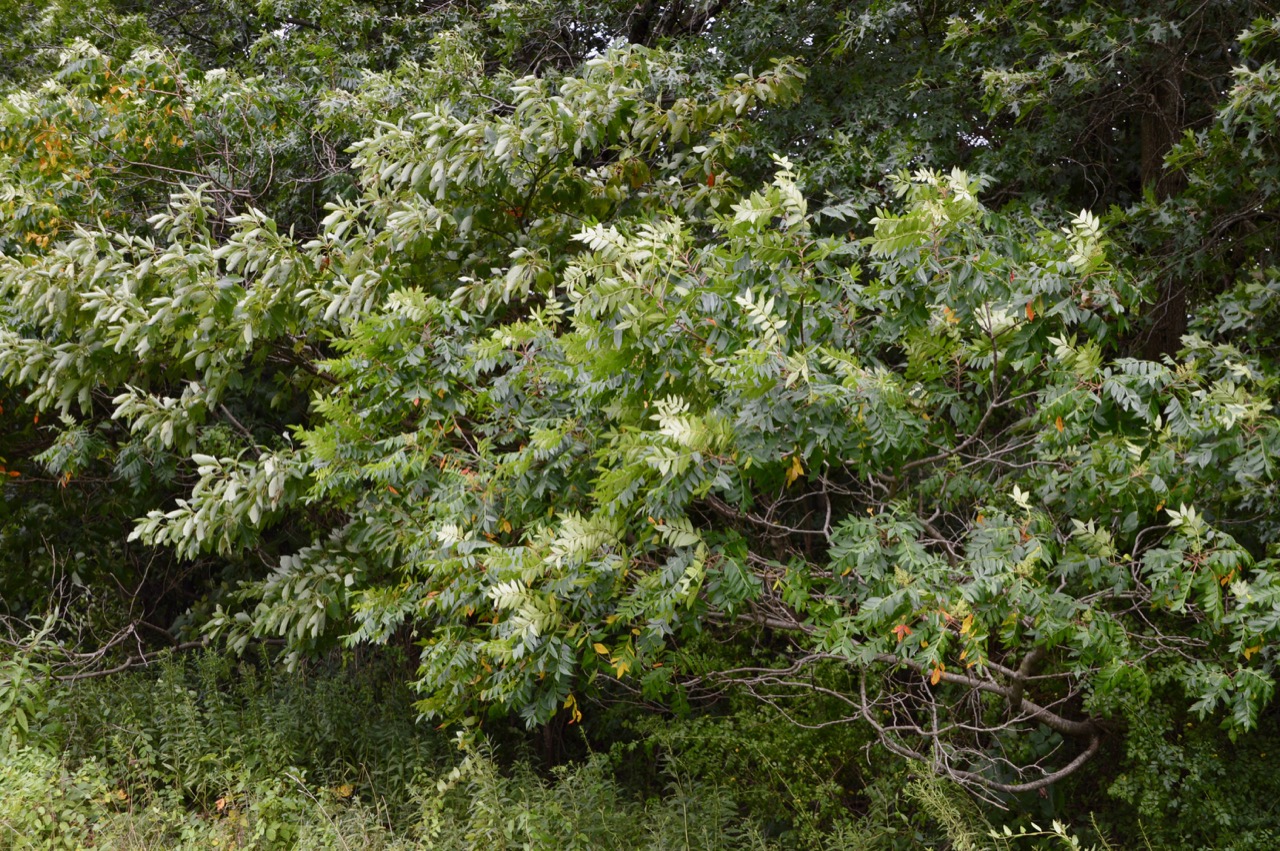 The rain did bring cooler temps but not that cool. It's cool enough that the AC does not turn on but hot enough outside that some AC would be nice. That strong wind from the southwest that the tree leaves are showing, is blowing warm air, not cool. That is northeast up ahead with patches of blue sky. The sky behind us looks like rain is near. While I was waiting for Stella to get on the path, Sadie had already started her own walk. She was obviously happy we were walking when the chances looked slim earlier today. 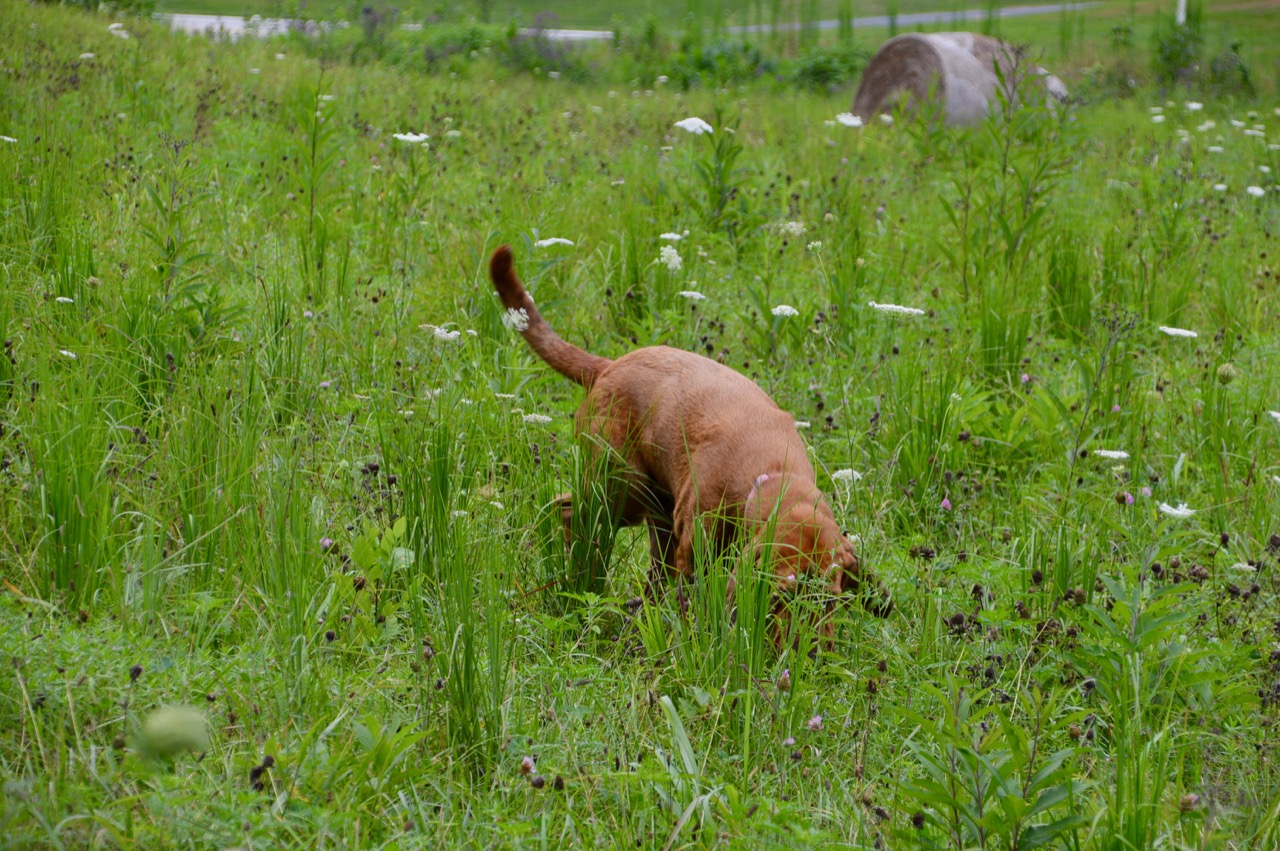 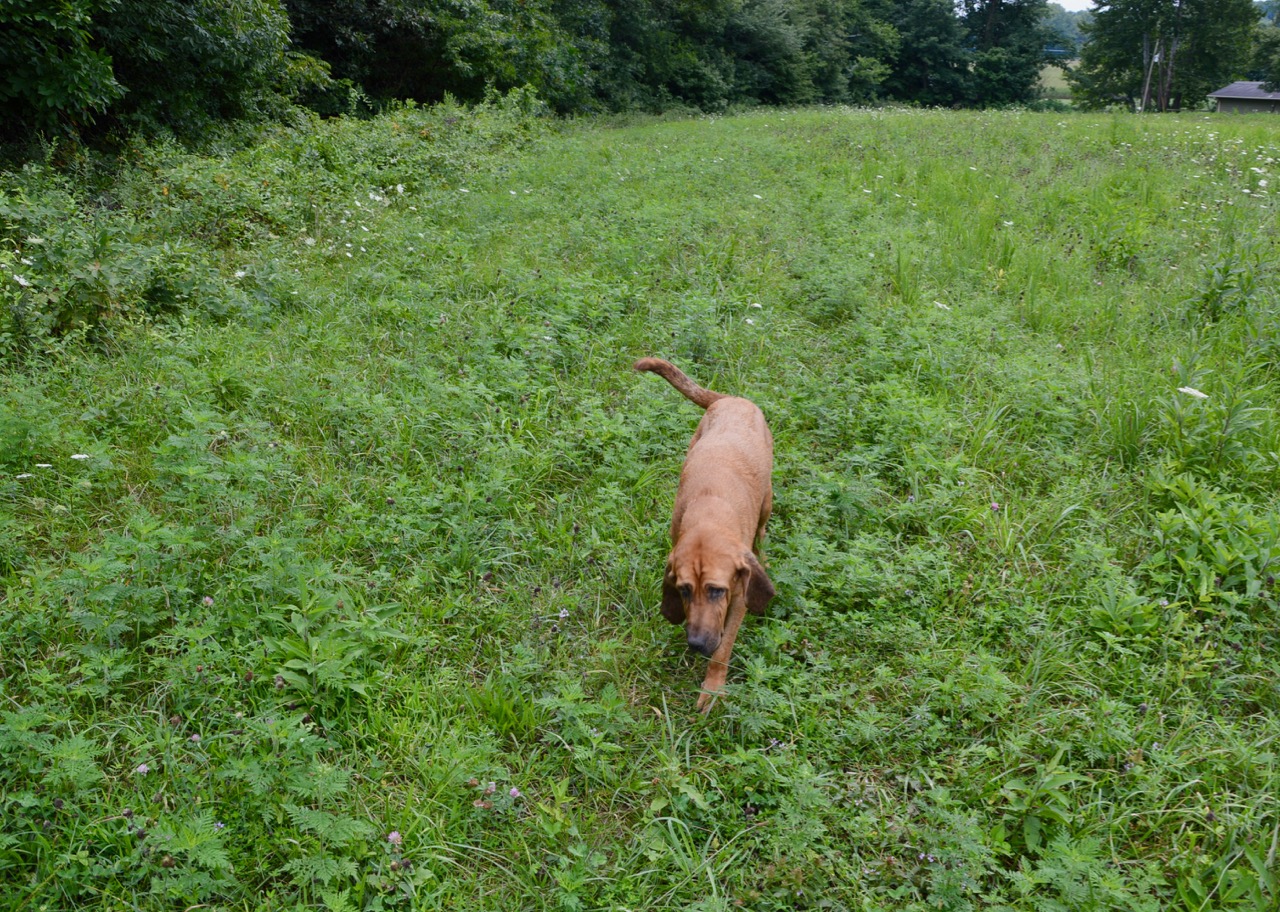 Stella took her time following her nose through the field to the path but she made it eventually. She then walked as close to me as possible as I tried getting this photo and reminded me she was still in charge but walking on my foot. Nothing like feeling an 80# hound place their paw squarely in the middle of your boot. 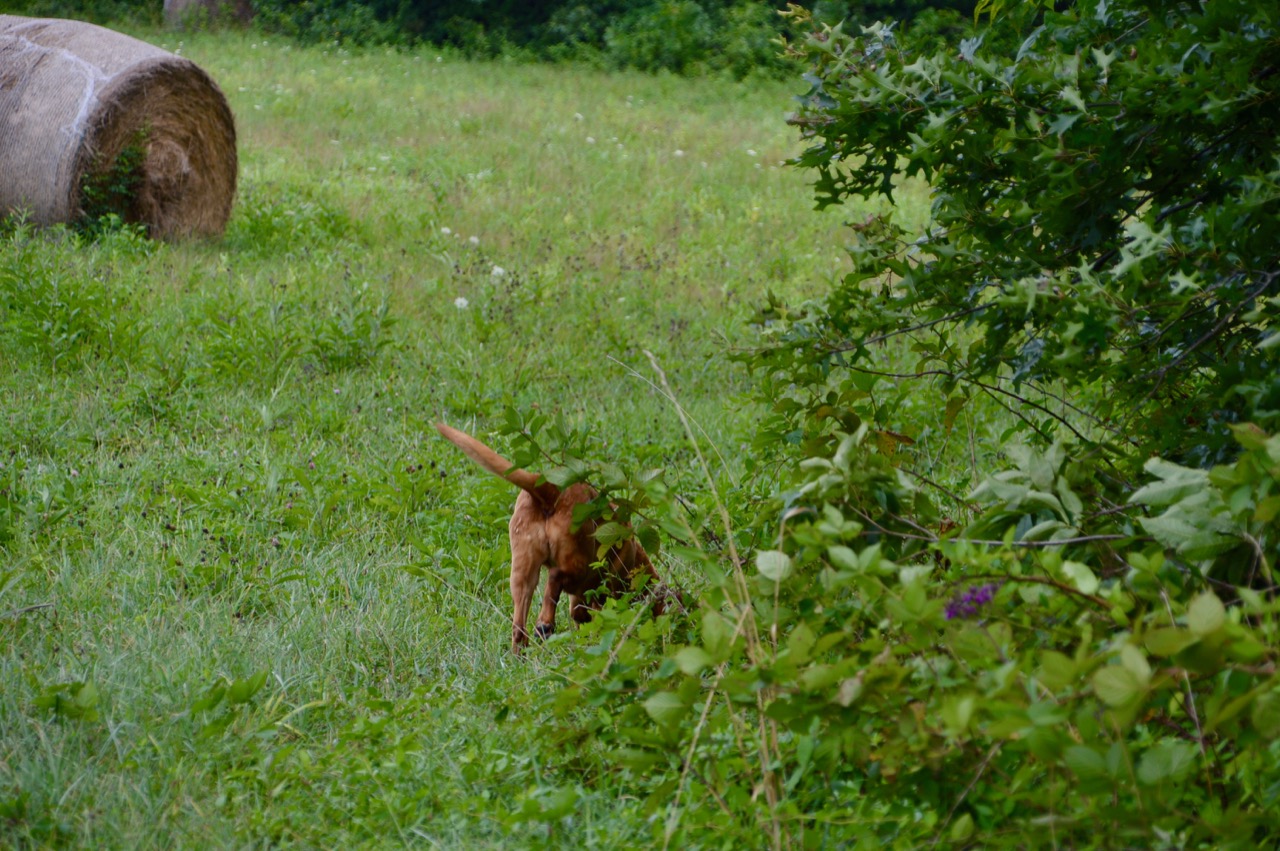 Sadie was nose to the ground and out in front of us. 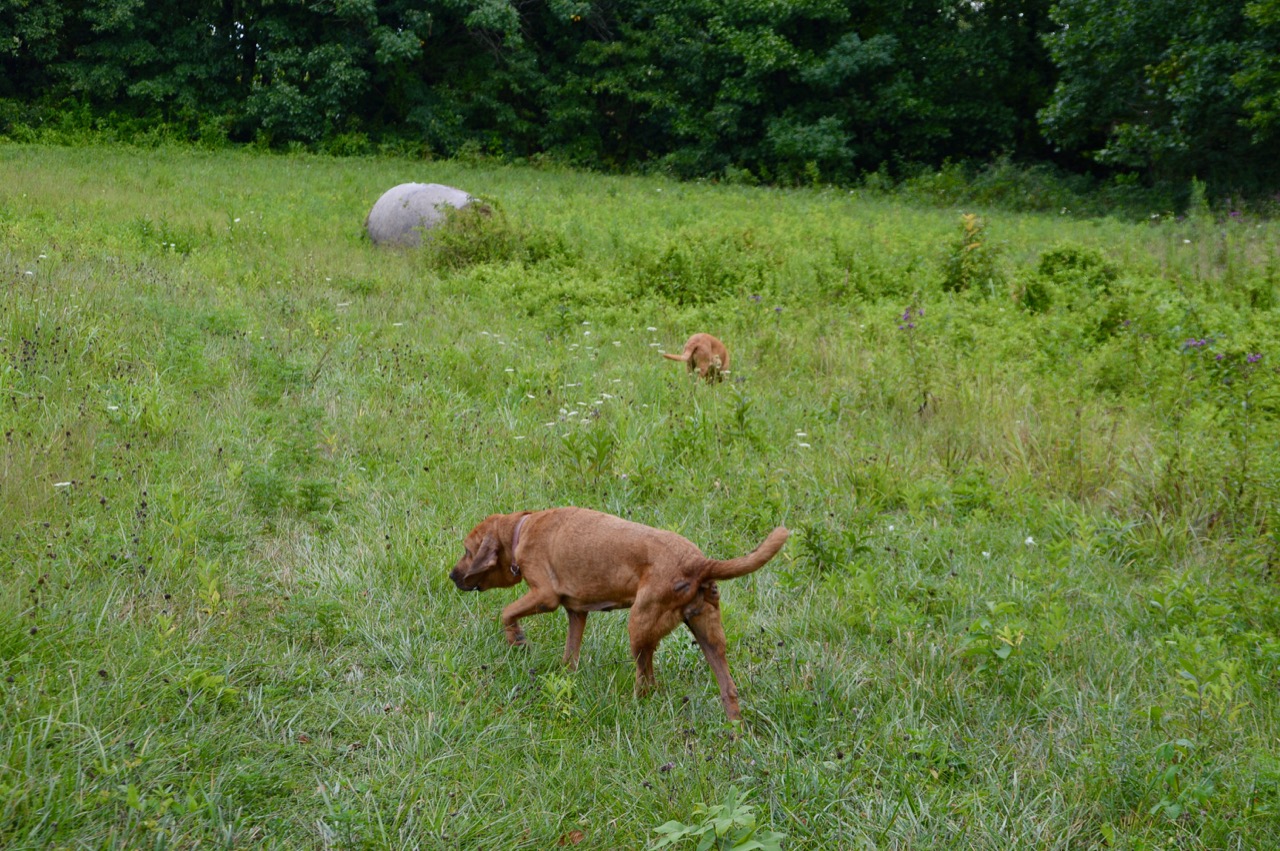 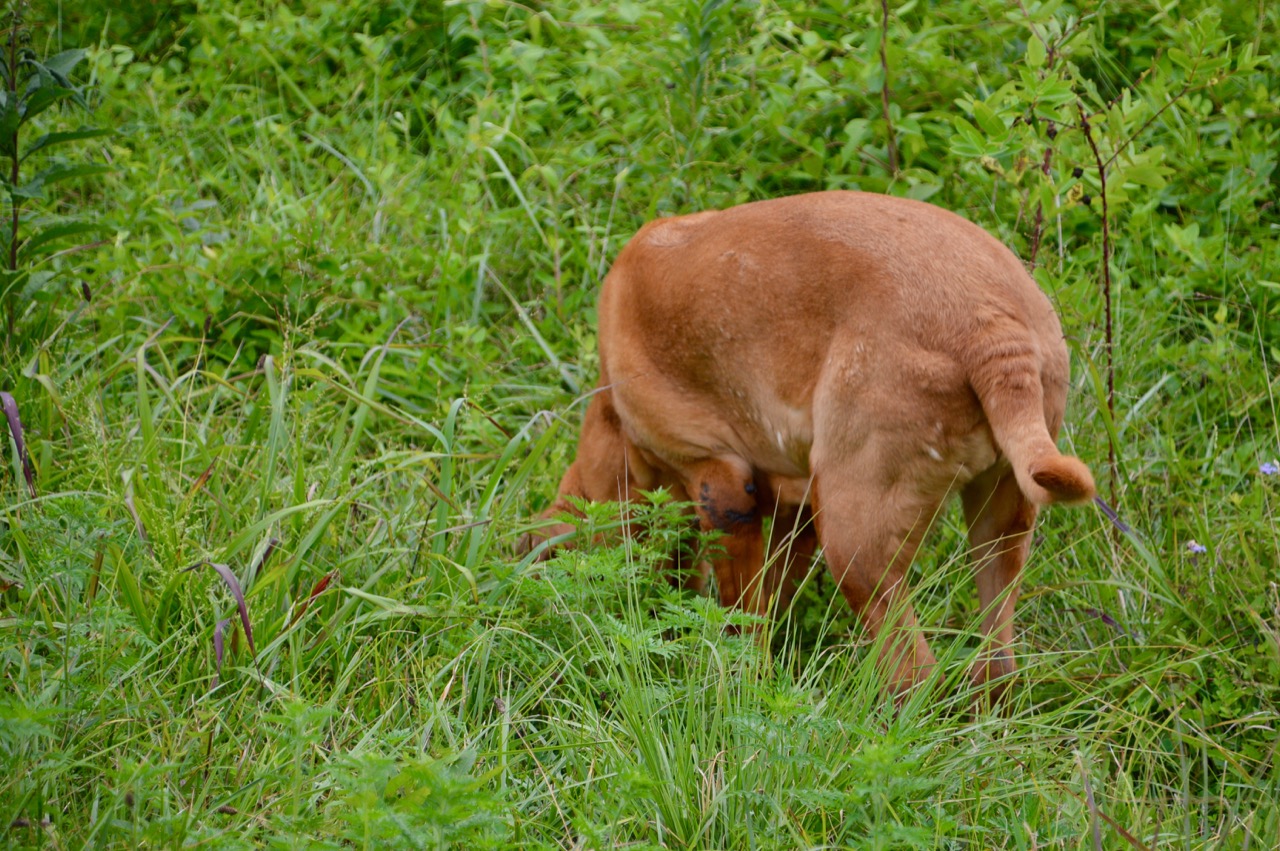 Interesting to see those small pieces of undercoat hair. Not only do I pull that out every day but I brush her daily just because the shedding she is still doing this summer. I've never seen it this bad and she is the only one shedding hair compared to Heidi and Stella. 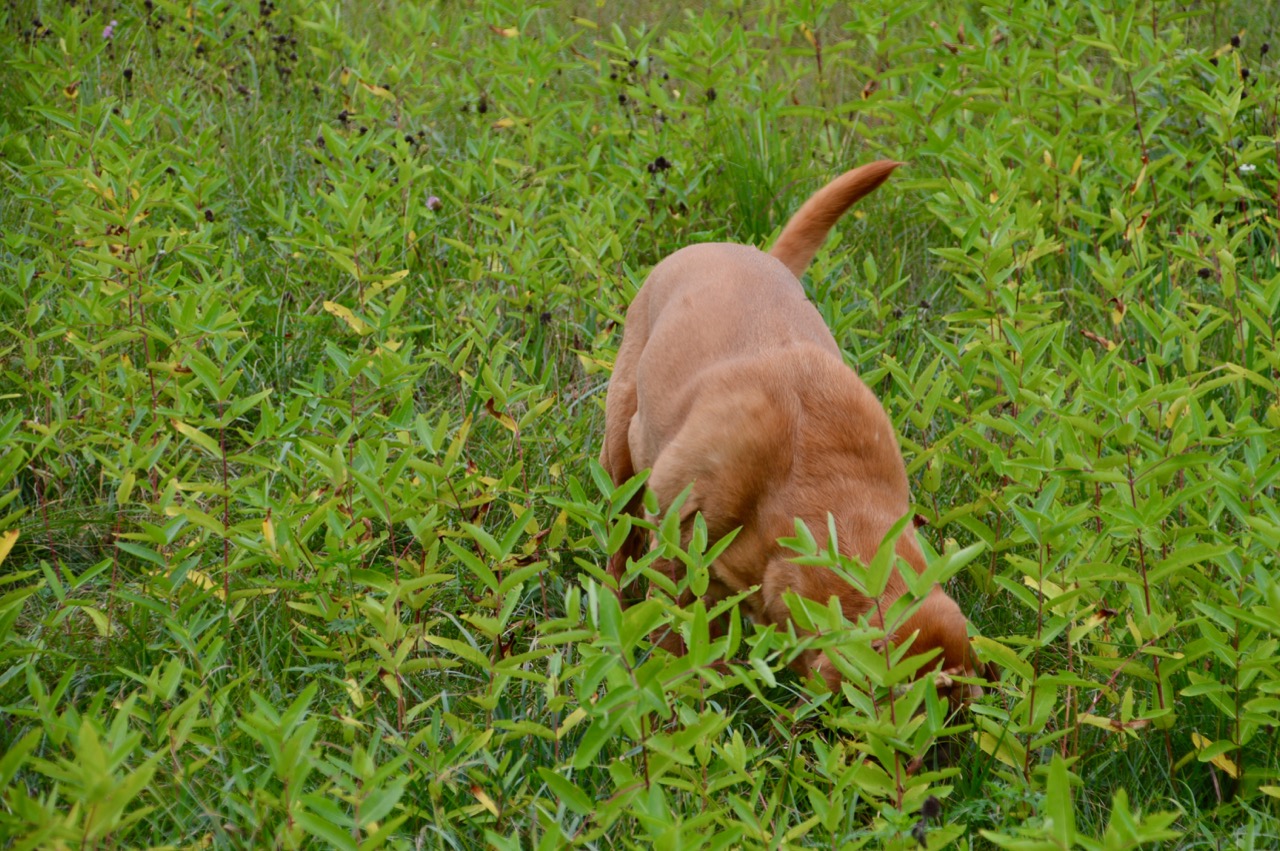 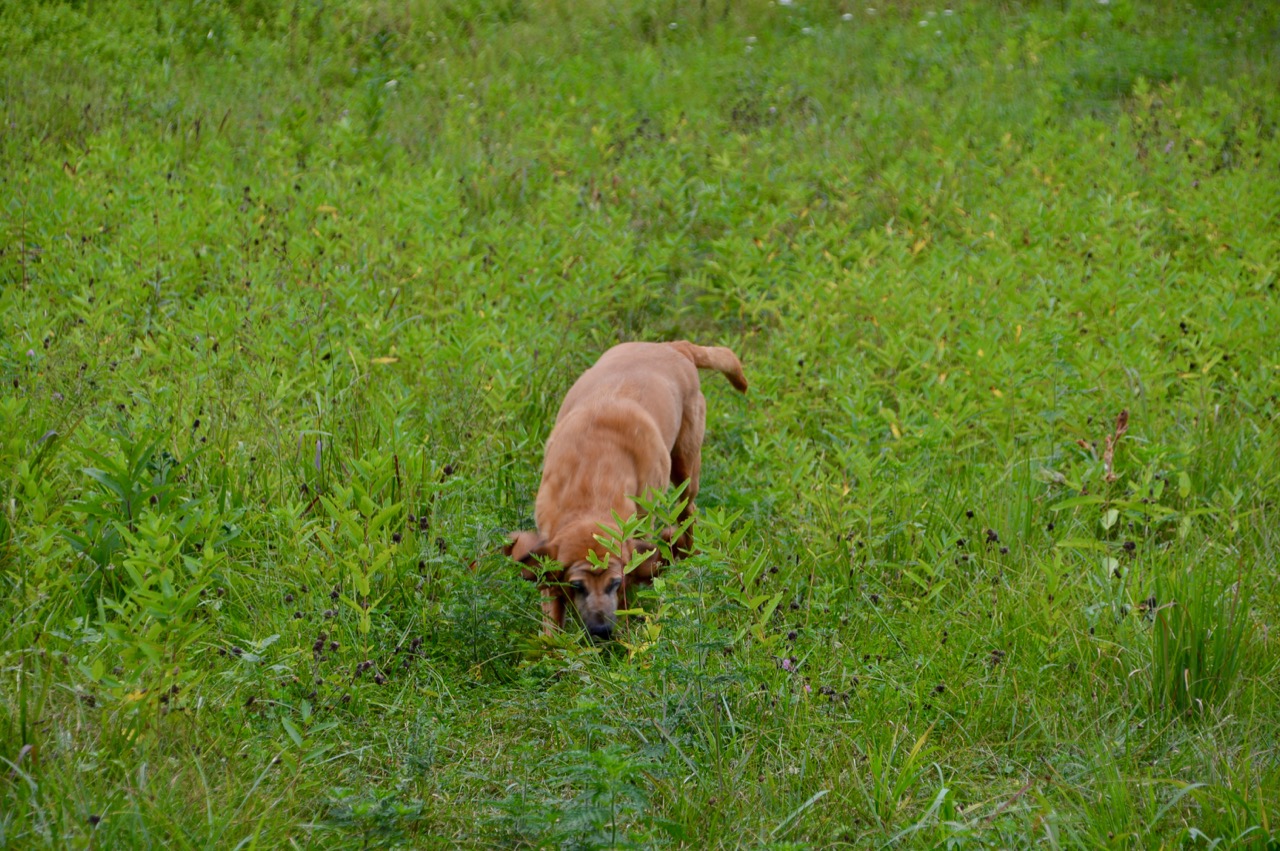 She got a little trotting in today's walk but not the full speed sprints she normally does. 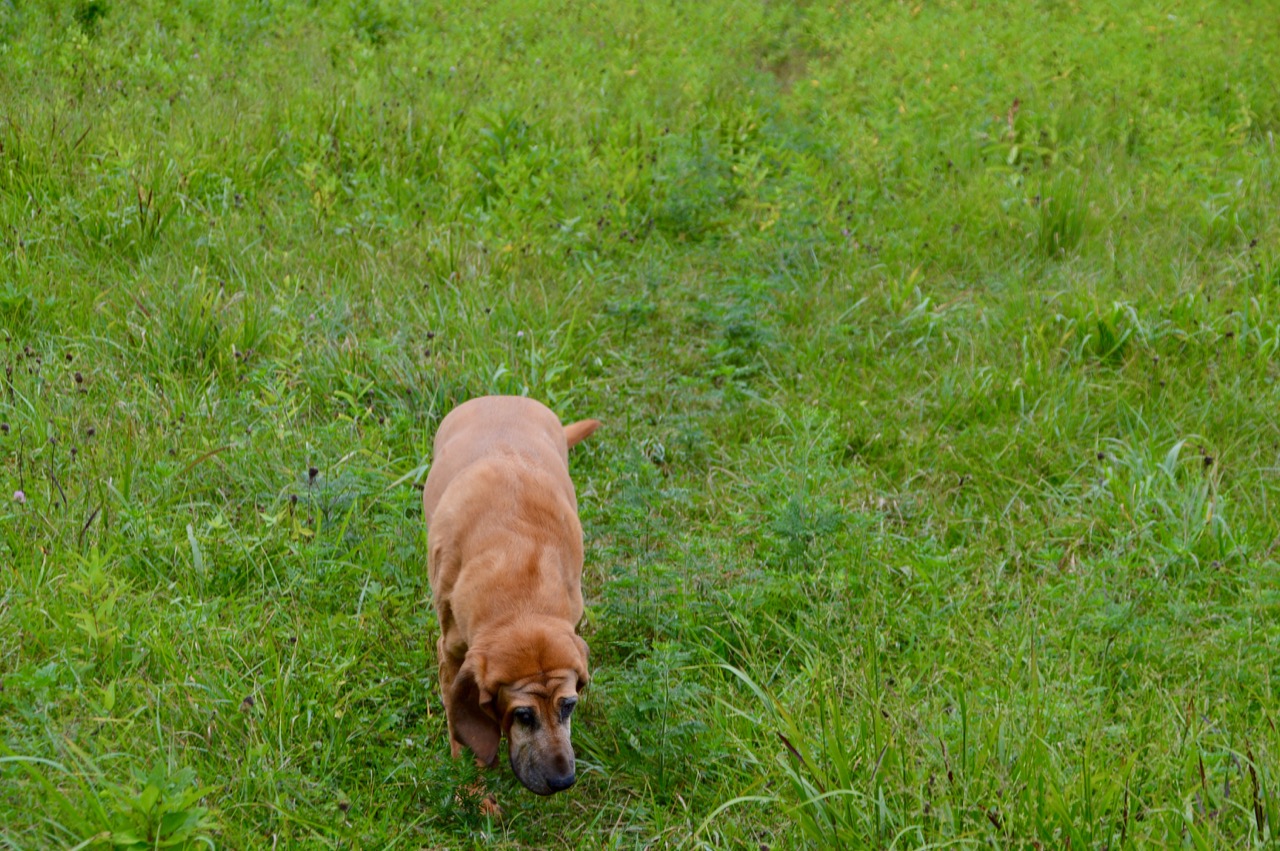 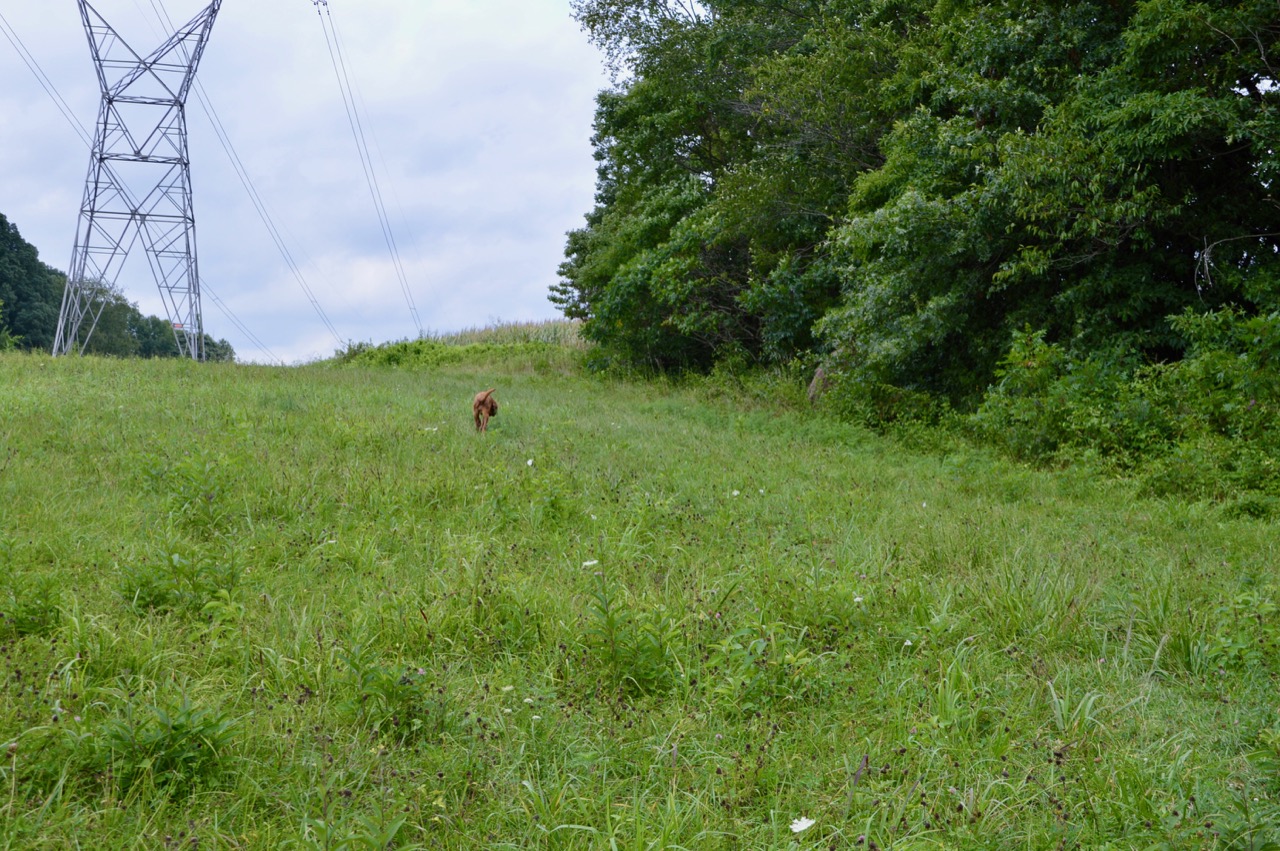 While I was taking photos of Sadie ... Stella was walking her pace without any stopping and getting way out in front of us. 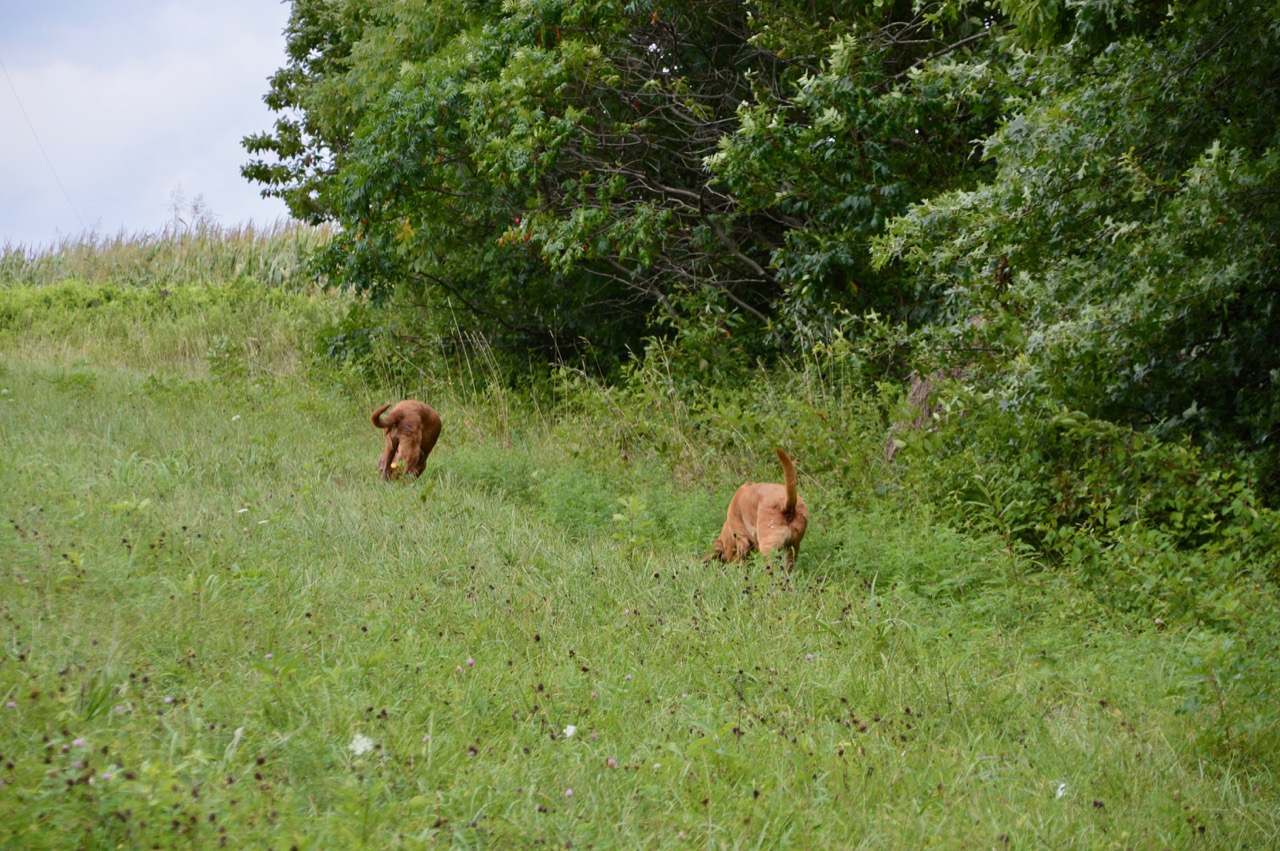 Once Sadie saw that, she took off trotting to catch up, thinking that Stella must have found something she needed. 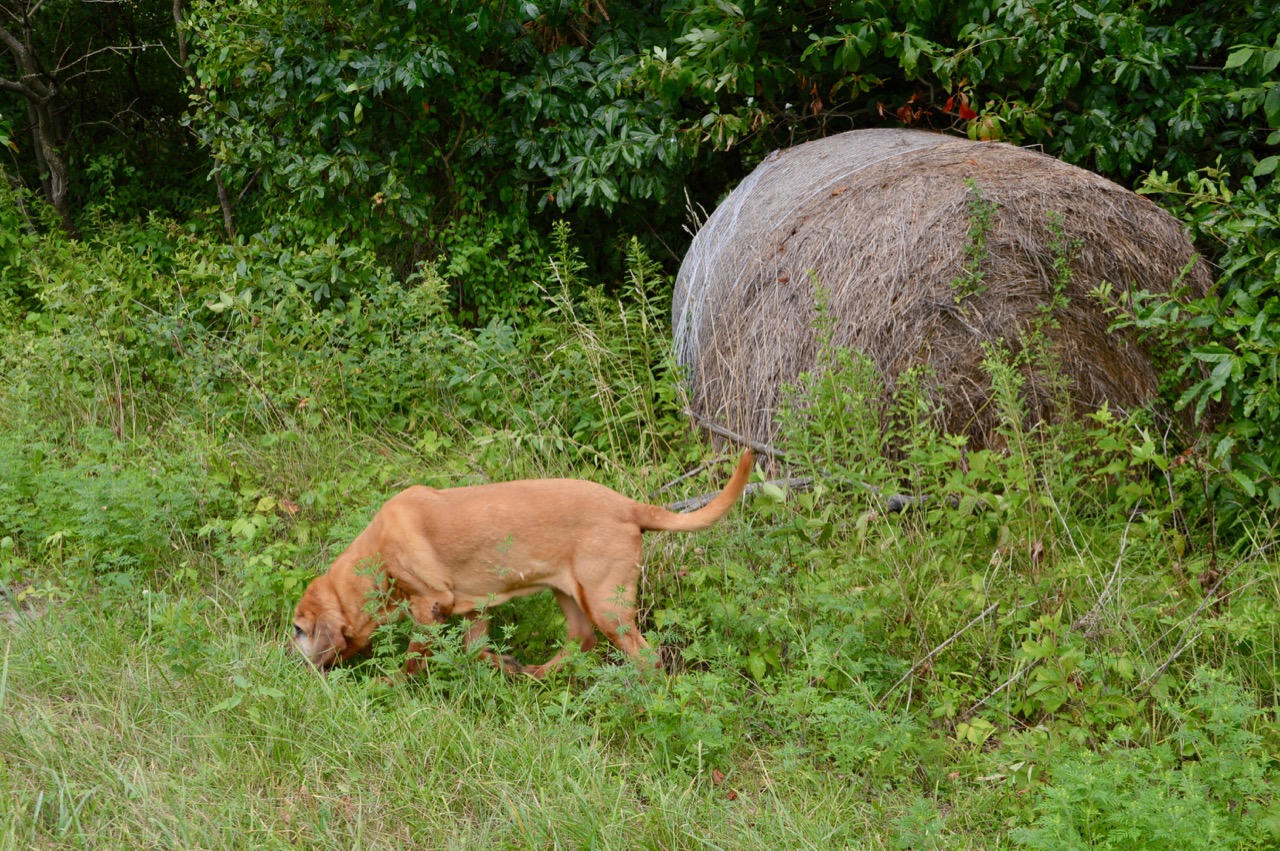 After more investigation she found out it was a false alarm. 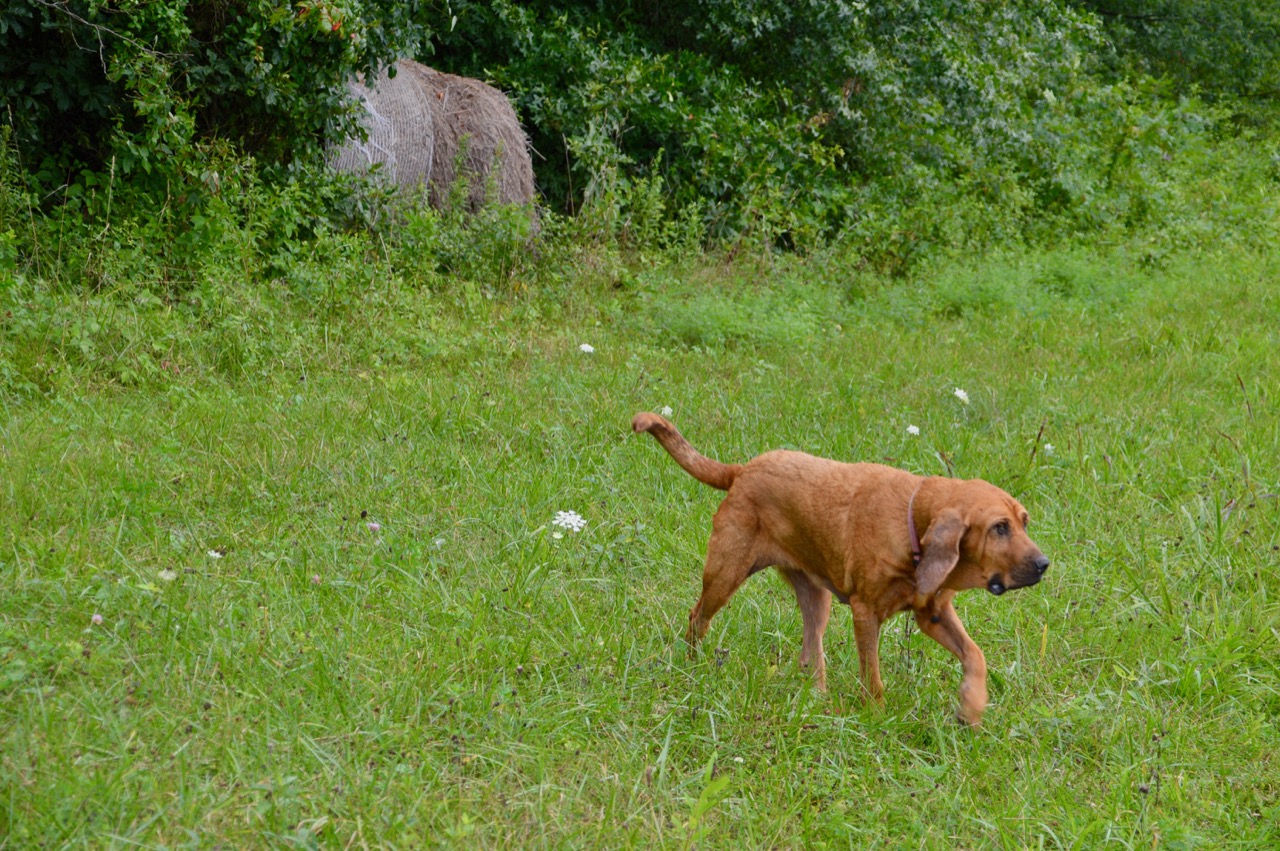 I did not say a word to Stella but she decided it was time to head home. She started walking without stopping again. I'll say it again, she is the funniest hound I've had in 31 years. 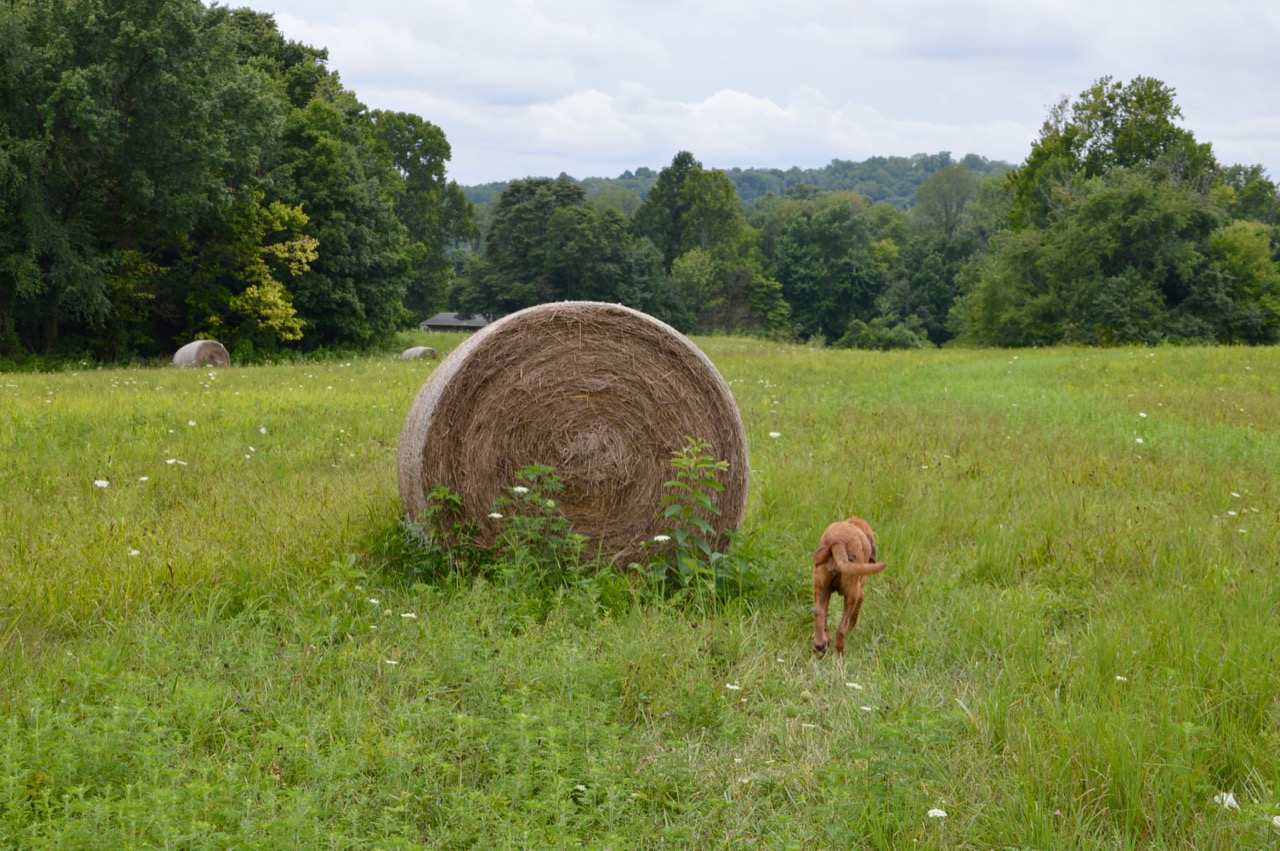 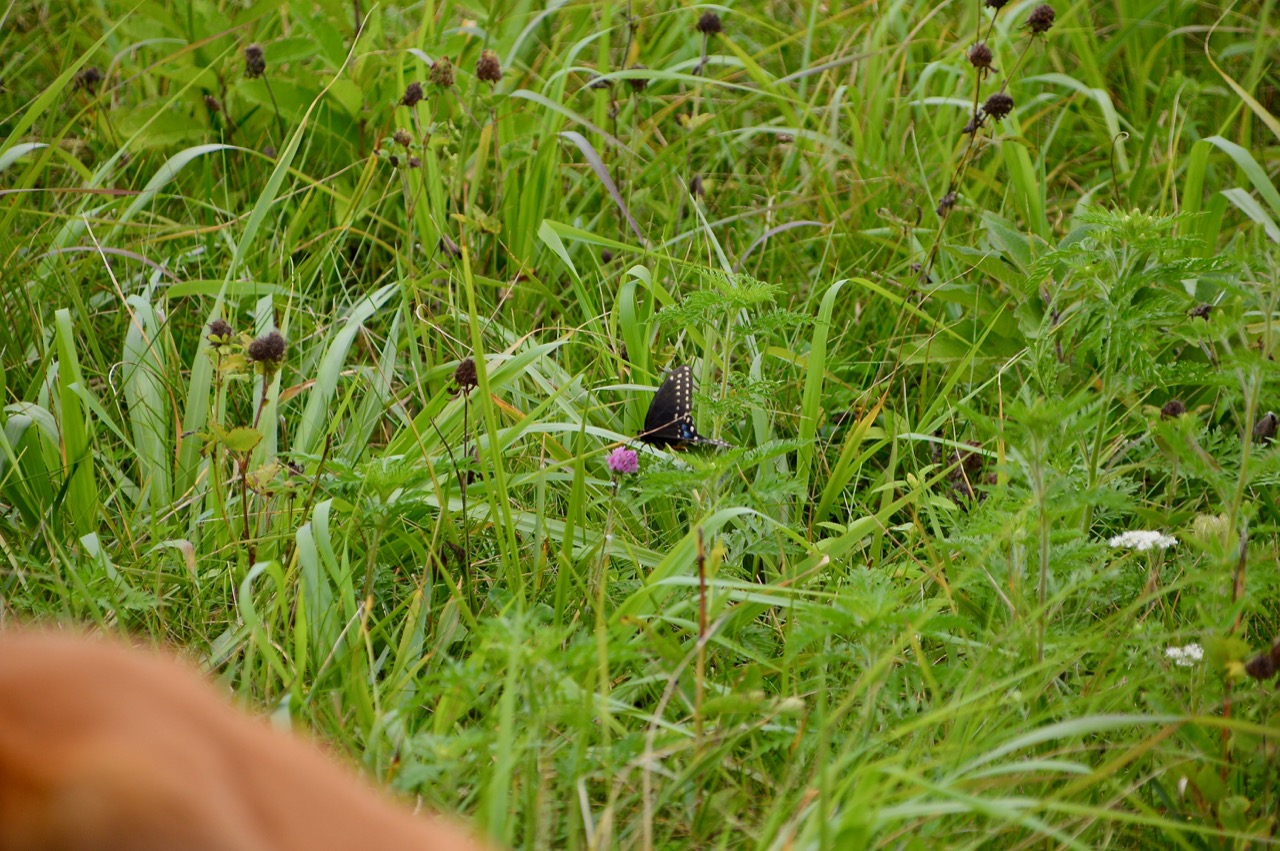 Only one butterfly was seen this afternoon on the walk. As you can see a lot of their food source is used for the year. They might not be around much longer. 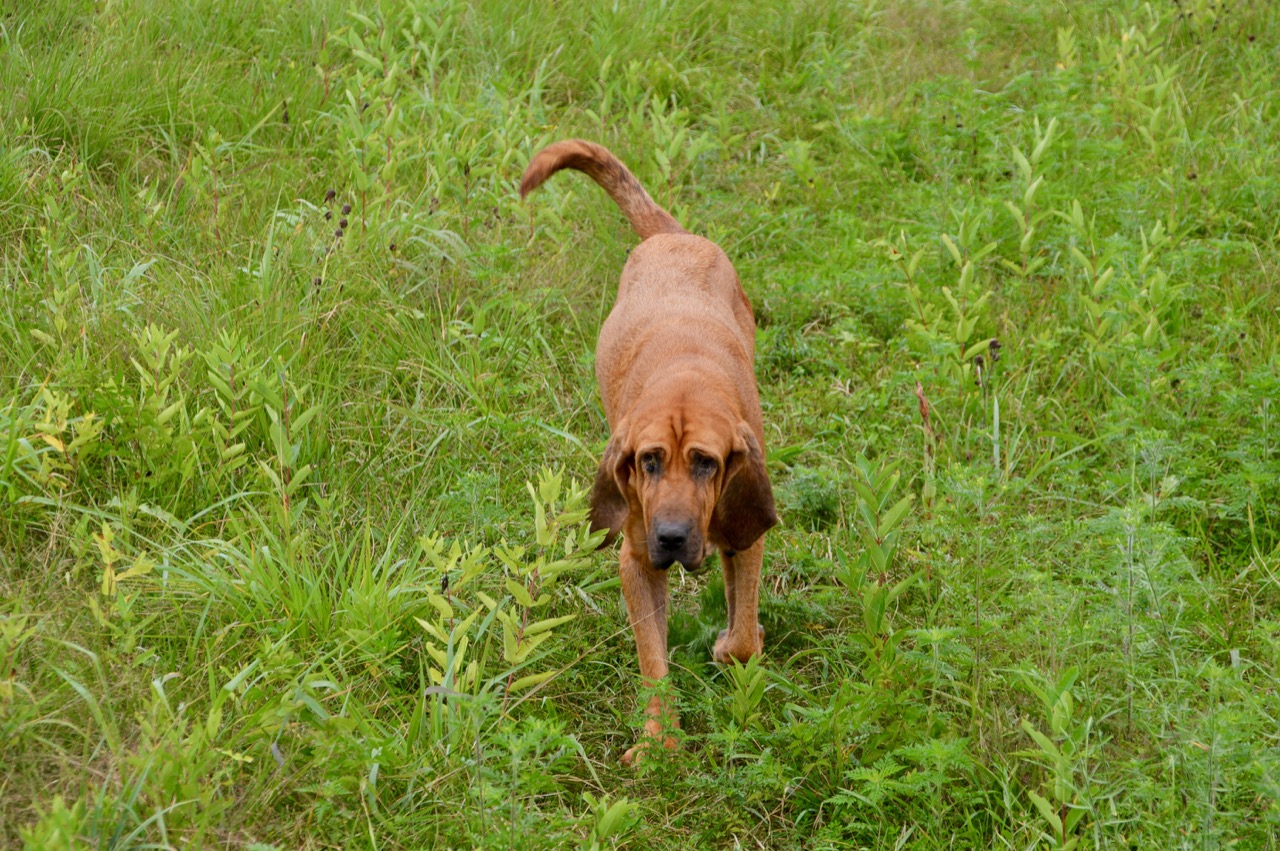 Stella walks too slow on the path for me to follow her and then when I stay in front of her she speeds up to be right on my heels, making it hard to take a picture of her. 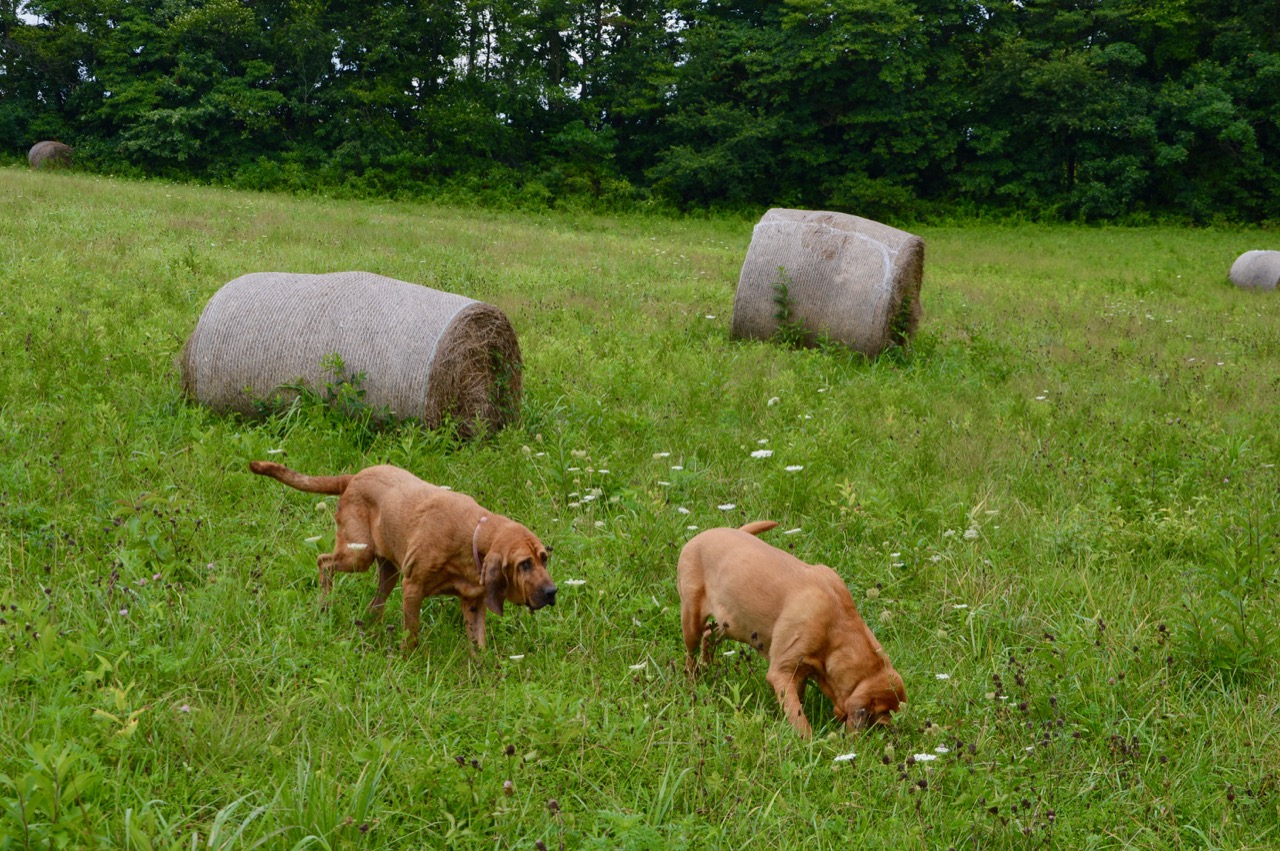 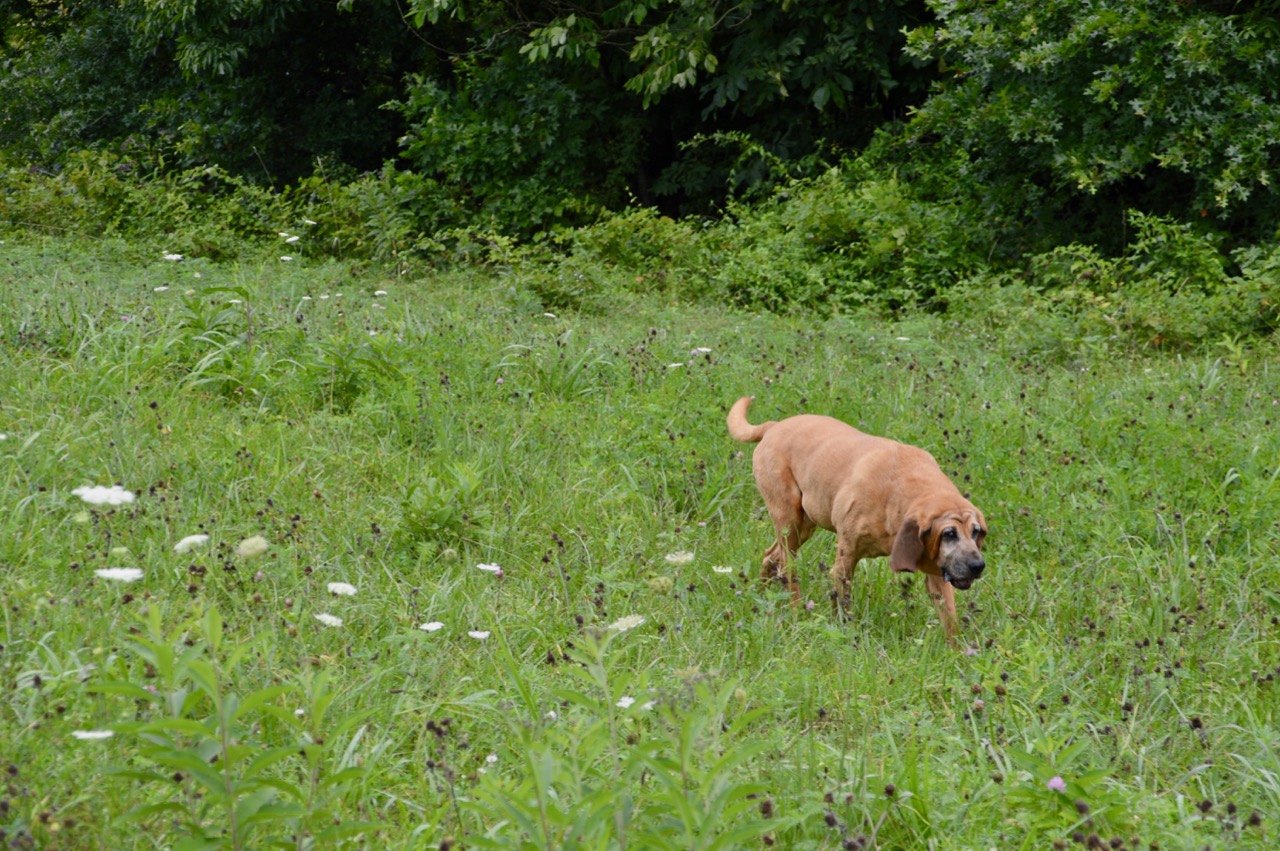 They still find time to explore even when we get closer to the backyard. The walk is never officially over to them until they step in the backyard. If there is field under their paws, they think they can take all the time they want to complete the walk. 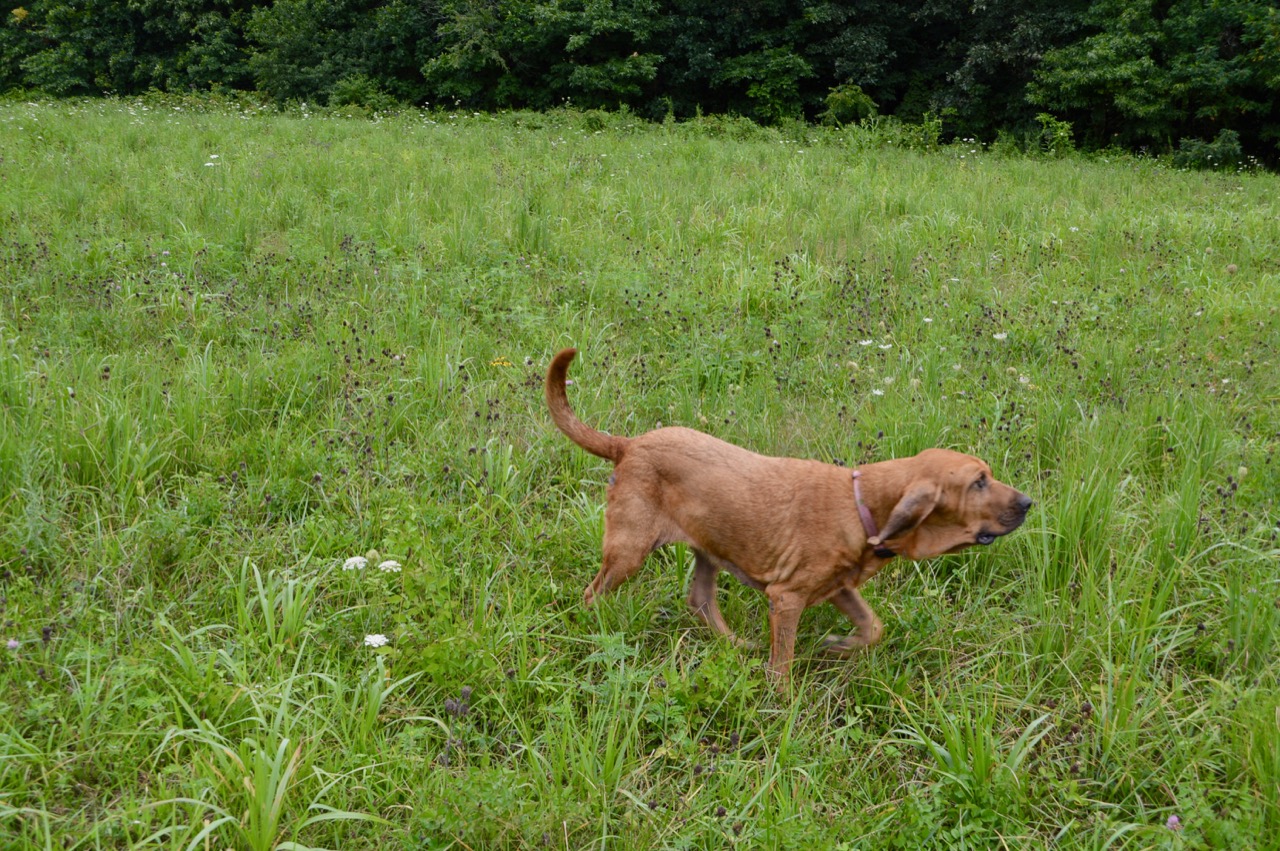 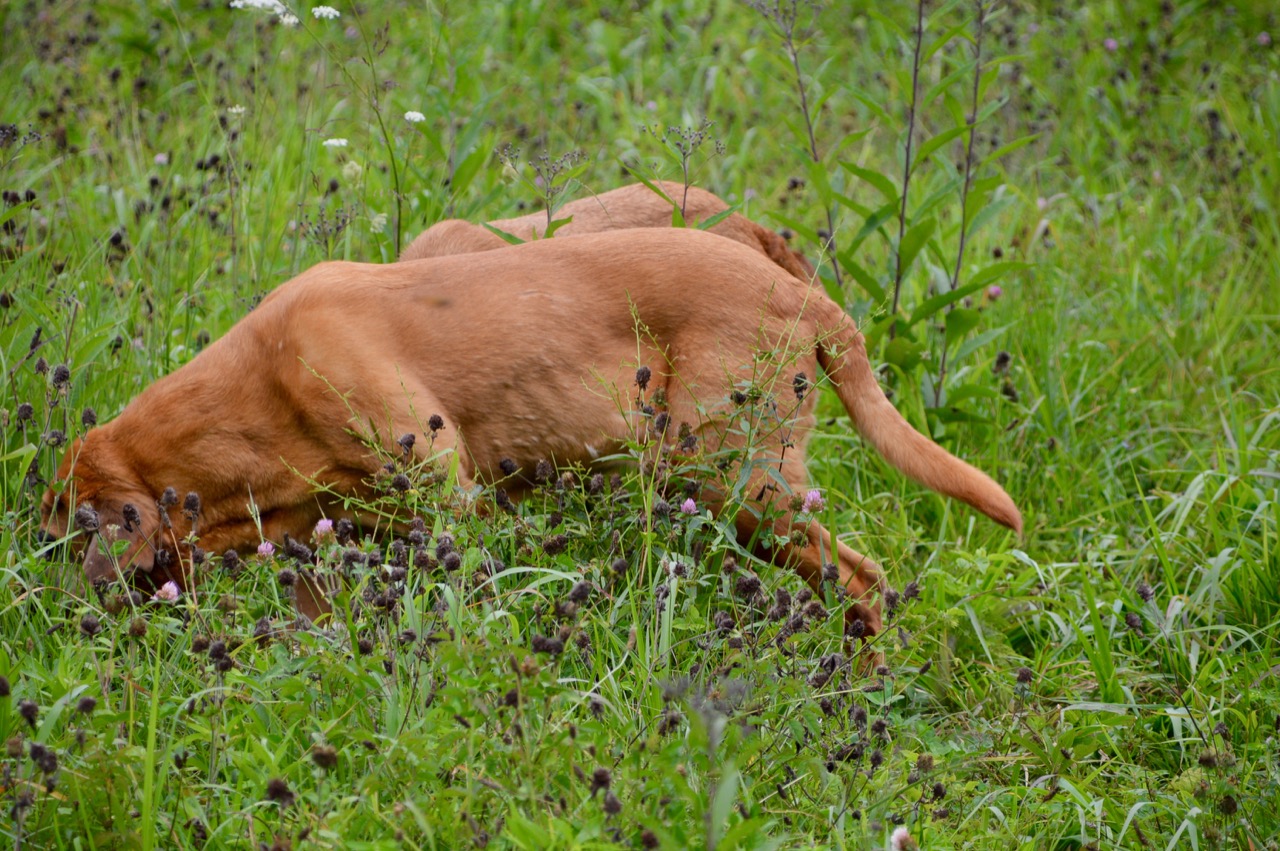 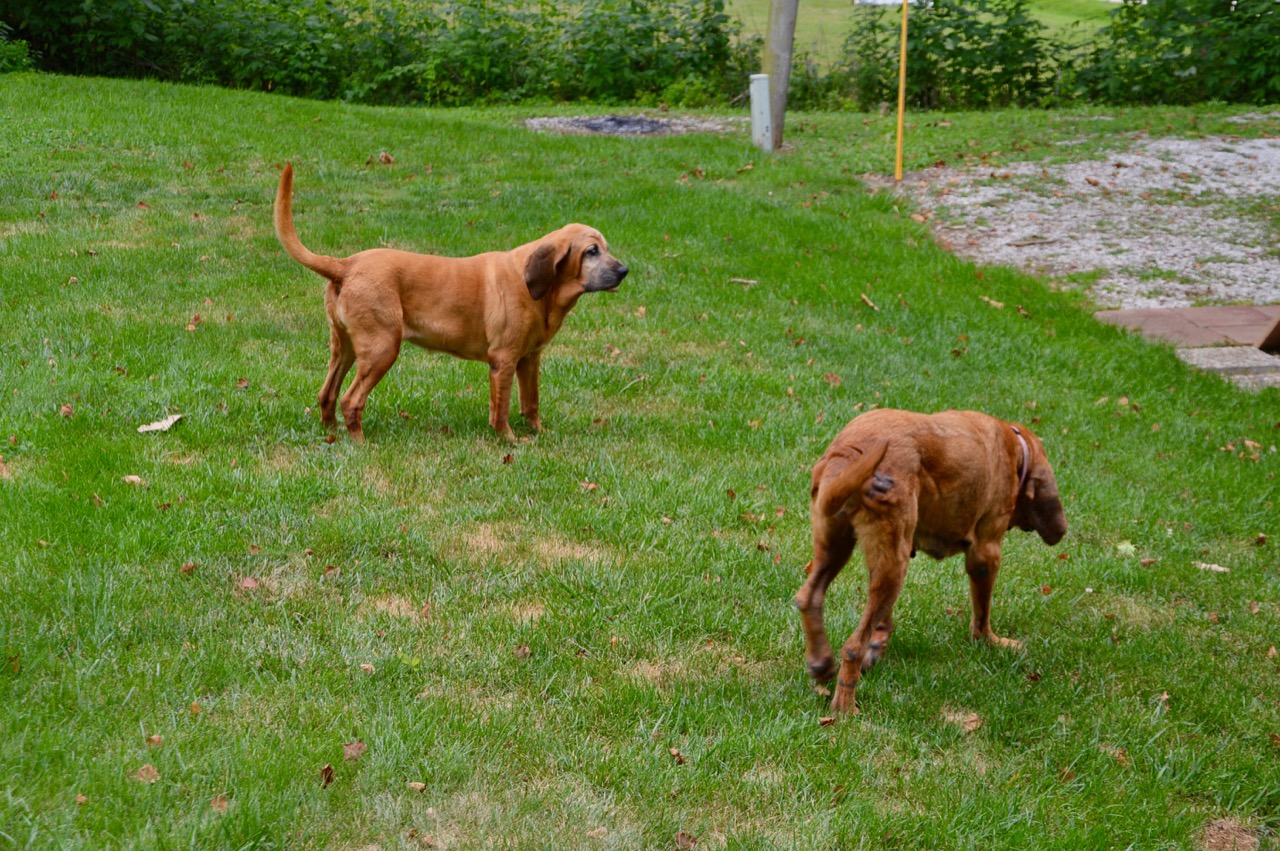 Once they heard that rumble of thunder, they became a little more motivated to get back inside. Rarely are they in front of me at this point of the walk. 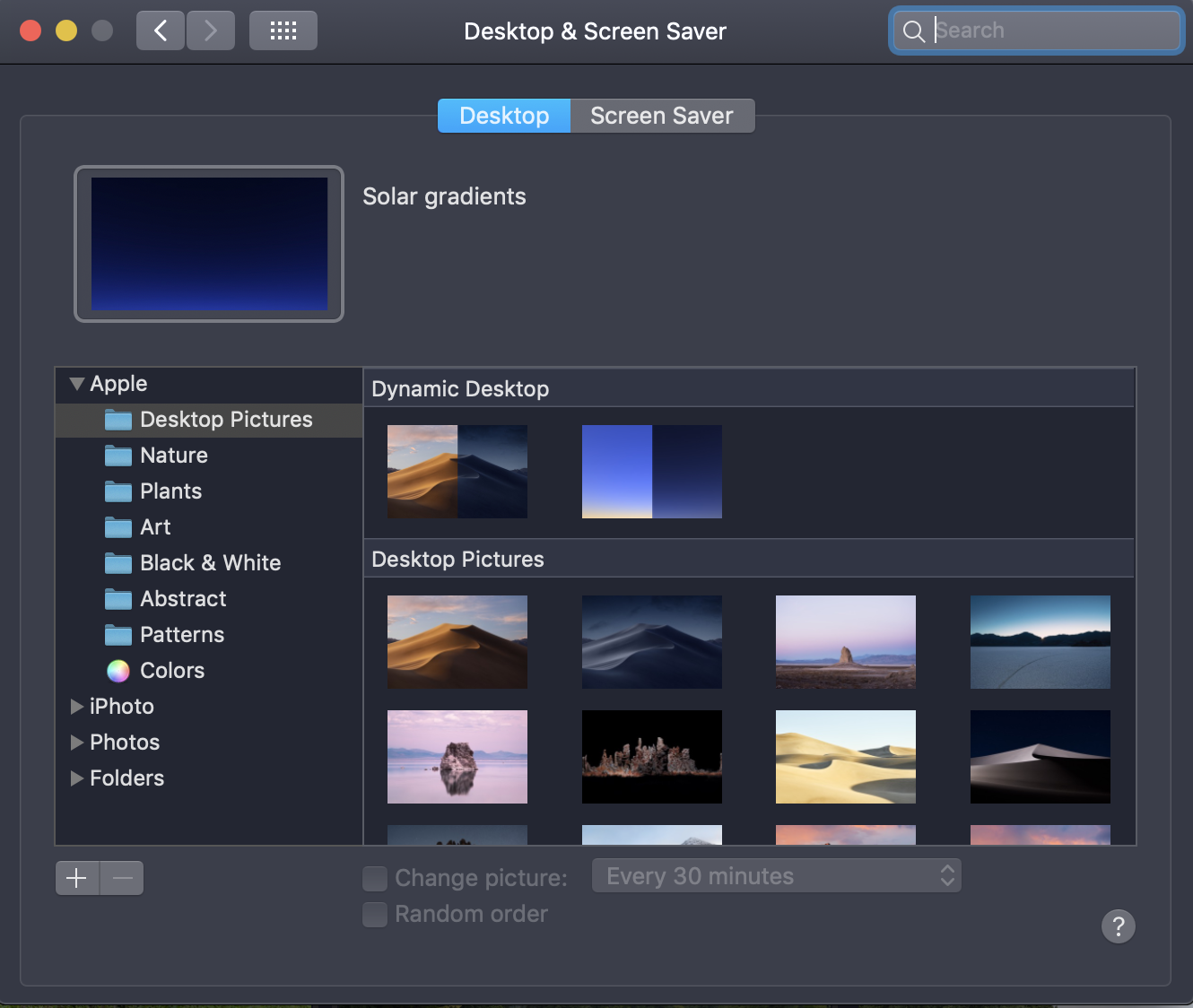 This is for the Apple users that read the blog. With each new update even in the beta version I see small changes, all for the better usually. You can tell they are getting close to the official release in a month or two. The system runs faster, files open faster, photos upload to the blog and Flickr faster and the one obvious change I noticed today was the 'transparency' feature brightened things up since I use the 'dark' mode.
I had been using solid colors as my desktop on my iMac. It was between dark gray and black, so my email, iMessage and preference screens were darker than you see. Today I changed my iMac background to the one on the right under 'Dynamic Desktop'. Since the Dynamic Desktop changes colors automatically based on local time, my borders around these darker screens brightened.
Some of the sidebars that had been the same dark color as the menu's of preferences, Apple mail and iMessage changed to a lighter gray color that made things easier to read. Plus not all the fonts were bright white like they were after their last update. Due to privacy, I cannot do screen shots of those because I am not sure my friends would appreciate our conversations or emails to be shown on the blog, if you know what I mean.
For example that lighter gray color you see as a border on the screen shot above was the same color as the darker screen inside around the images and list before last night's update. All of the fonts were bright white. Subtle changes.
My Reds game turned ugly early last night, so I went from watching baseball to watching an old old movie that was being shown on HDnet channel. Some of you may remember this movie from the early 90's or late 80's ... called ... Officer and a Gentleman. I like watching it for the scenery. All very familiar to me because I lived there for ten years. The motel, the bars in the movie are in Port Townsend and the old abandon stone base is at Fort Ebey SP, just around the corner from where I lived. The ferry ride and landscape brought back a lot of good memories.
I'll try baseball again tonight as usual but my patience is running thin again with the Reds while they are in a losing streak since their All-Star Break. Before that break they had been the hottest team in baseball for the previous month. After a hard day all of the hounds will be doing their normal sleeping, with Sadie in her big leather chair with her head on the ottoman, Heidi next to me on the couch and Stella stretched out on the floor near any AC floor vent.
I hope to get back to my tasks at hand after the rains leave us.
A fast day here in 'the tropics' of southern Indiana today.
at August 07, 2018