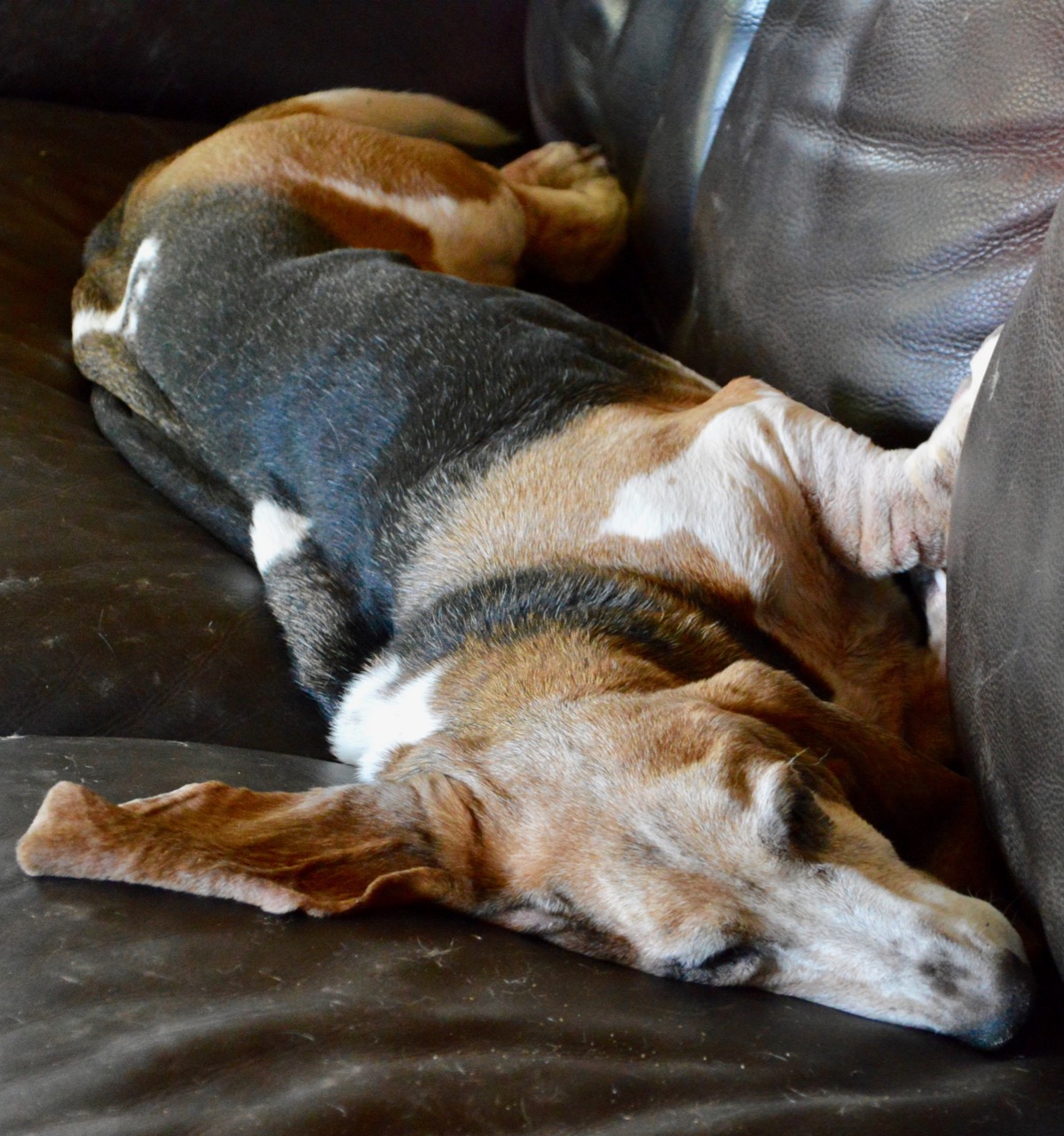 By 10am it was time to sneak out of the house with the bloodhounds for their morning walk, another late start seems to be the norm recently. As you can tell Heidi didn't have any intentions of taking a walk. She had been outside first thing in the morning with the bloodhounds while I poured the breakfast kibble. After that meal she assumes her daily position on the couch until it's time to eat lunch. 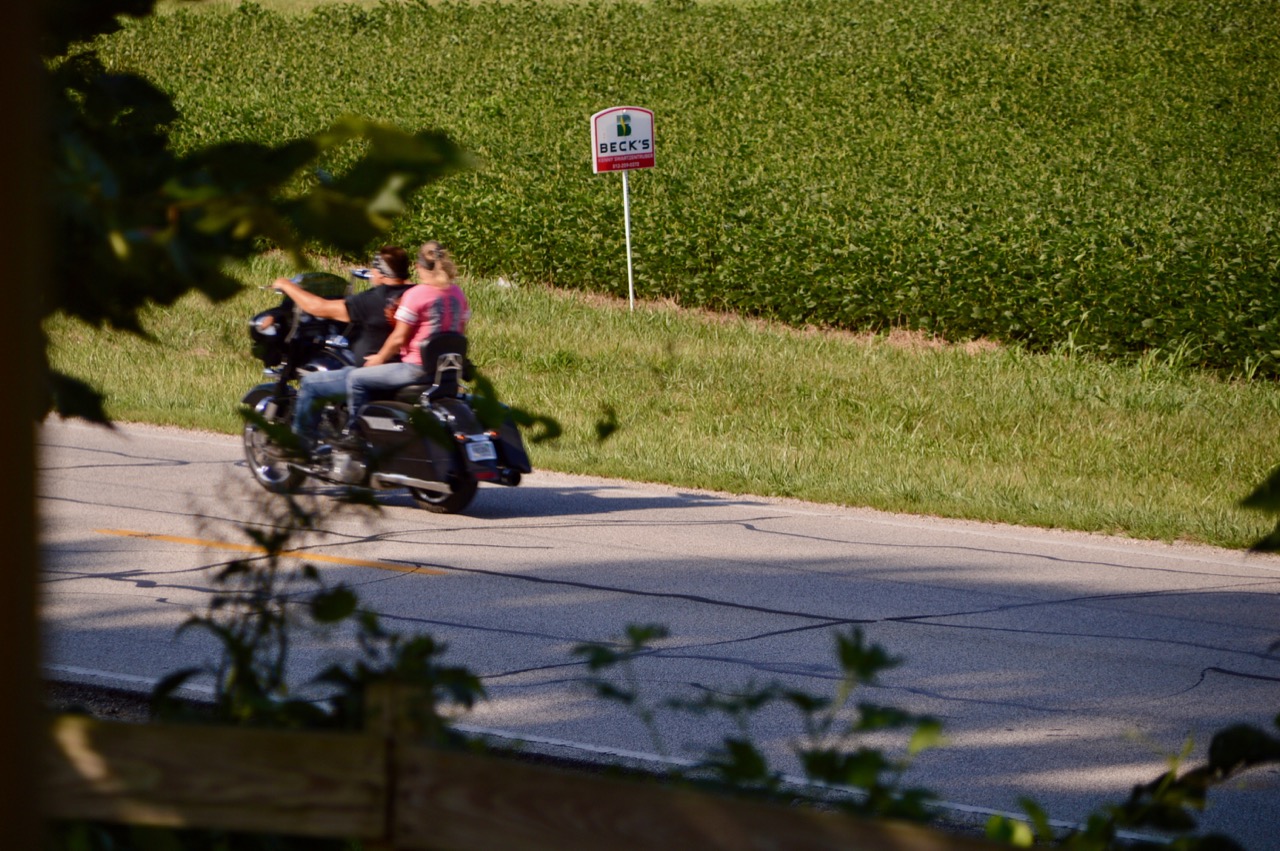 As I opened the door and stepped outside I could feel the heat and humidity in it's slightest form, letting me know it was going to be a hot muggy day today. Perfect for staying inside with the AC on and two baseball games on the tv screen this afternoon. I also heard what sounded like a Harley but after looking at it when I downloaded the photo it was hard to tell, but I could barely see one tucked inside all of the other stuff. I was told once by a motorcyclist that the highway in front of my house was one of the most popular in the state of Indiana to ride on. It's also one of my favorite routes in the Z4. 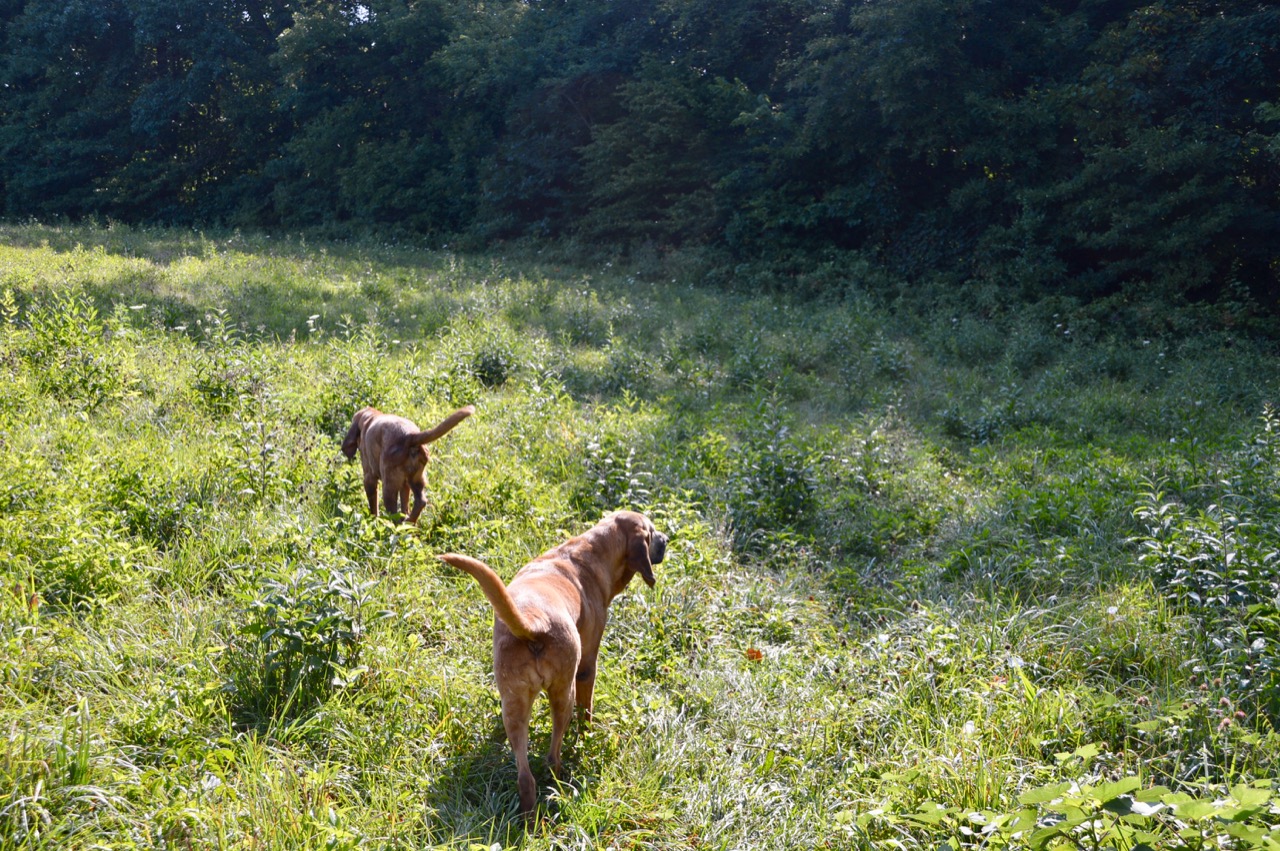 I cannot say why our morning walks have started later this summer. Like always I am extreme one way or another. We use to get our walks in by 8am, photos edited and posted with a morning blog post finishing sometime between 9:30am and 10am. Anymore it seems I don't start my second cup of coffee while reading the internet sports news and blogs by 9:30am ... or I am up outside doing a task from the 'to do' list by 9am. I guess it's good to have variety in a pretty mundane daily routine. 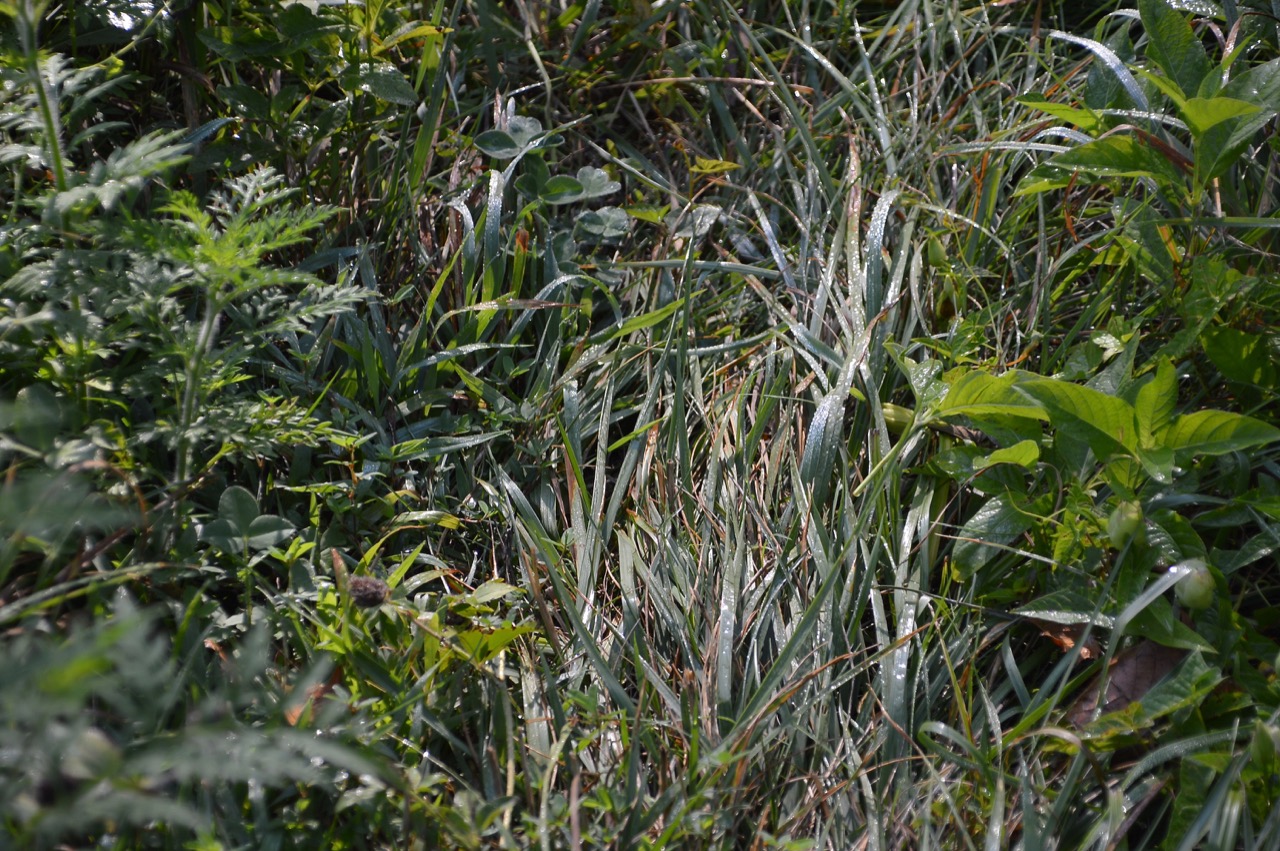 Every morning walk is now drenched in heavy dew where the shade is in the field. So every morning without asking I wear the North Face snow boots, that double as my rain boots, to keep my feet dry. This morning was no different than any other morning ... soaked boots dry feet soon after the start of the walk. 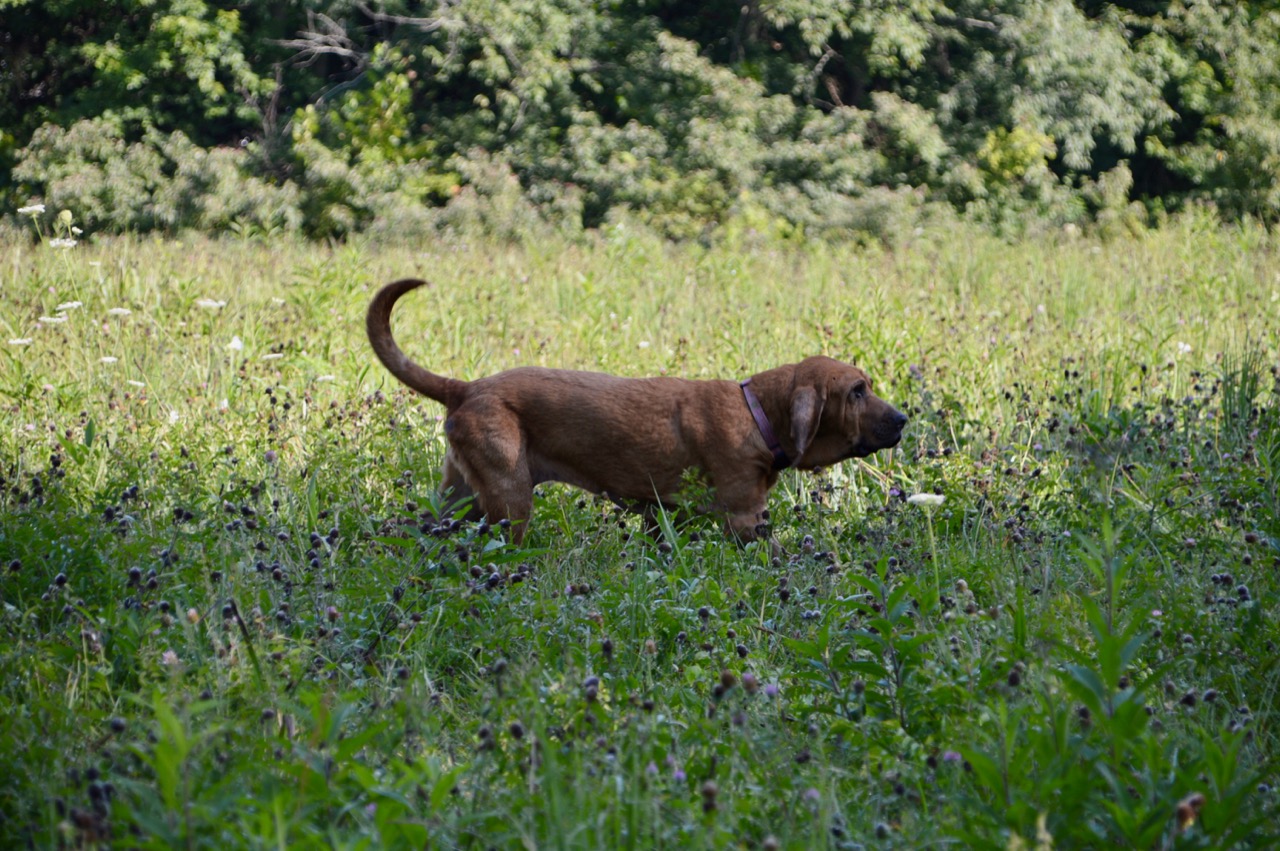 That doesn't bother Stella though. Whereas Sadie rarely if ever changes her path in the field, Stella likes to change her routine every couple of weeks. Recently she likes to veer off into the middle of the field, make a couple of complete circles before deciding the most perfect place to fertilize the 7 acres of wild flowers and little grass. 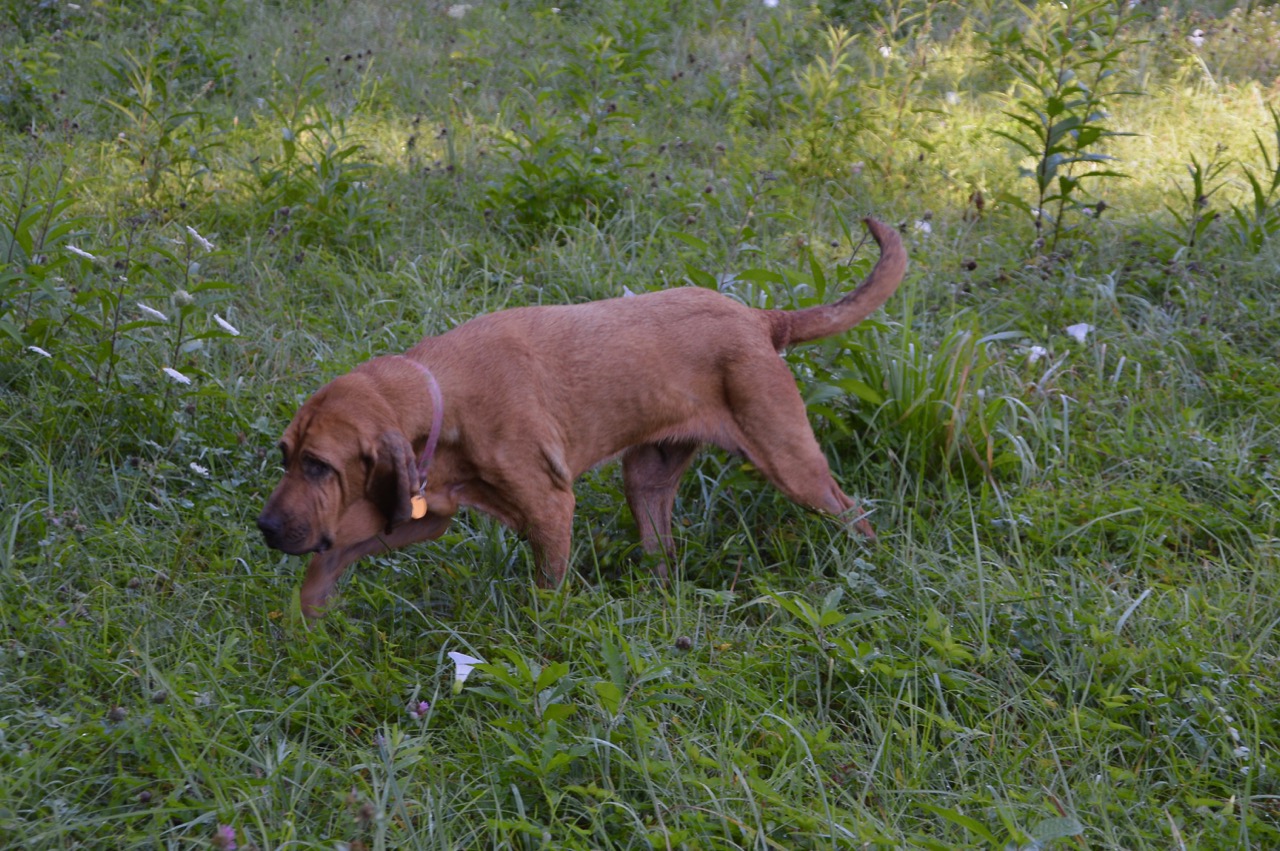 I might have to say "come on" a couple of times to get her headed in our direction. She will walk directly to the path I am on but never directly to the voice she is hearing. While this is going on, Sadie is nose to the ground trotting or stopping to investigate a scent near the edge of the field and wild bushes. 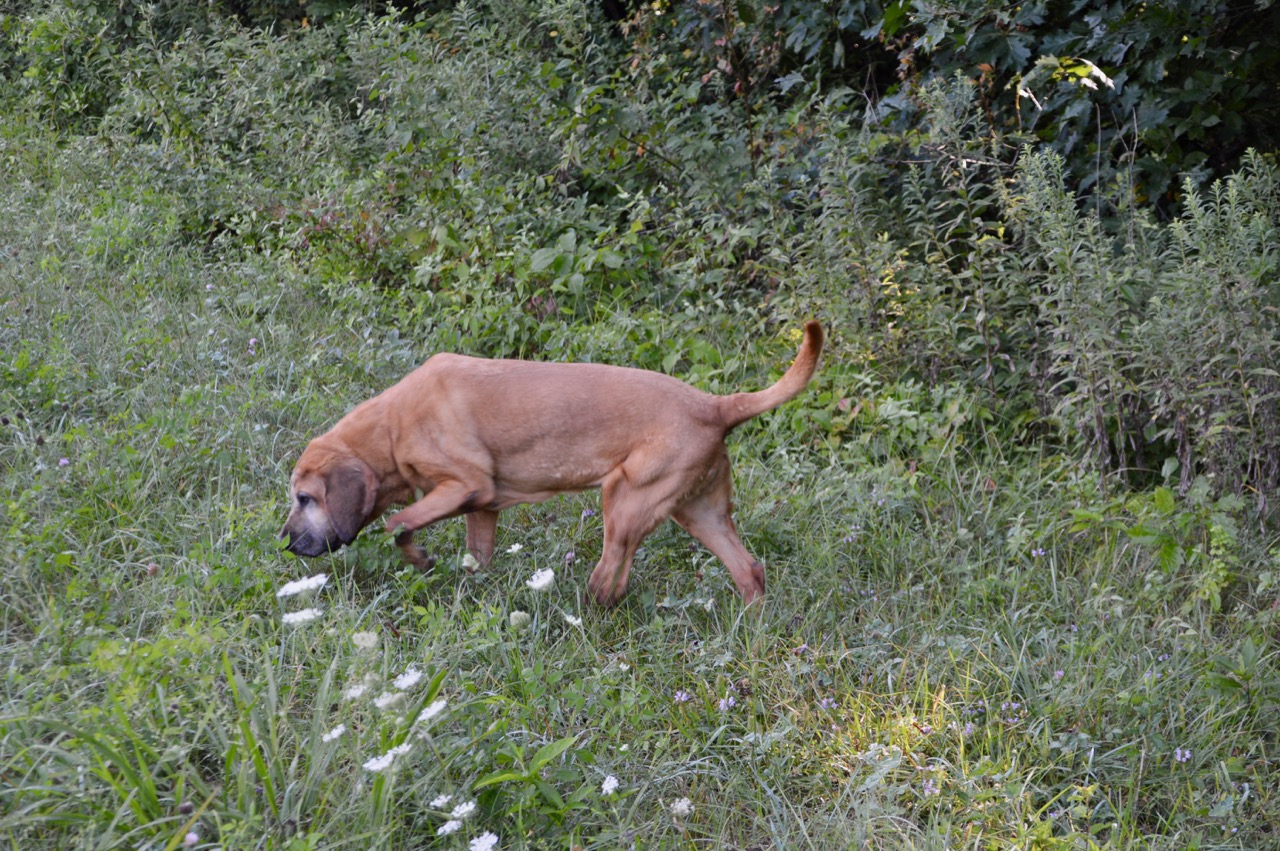 She never changes her walking area in any of the walks we take. Lately we have been able to squeeze in three walks per day and still get back in time for the first pitch of the Reds game, which is usually at 7:10pm local time. 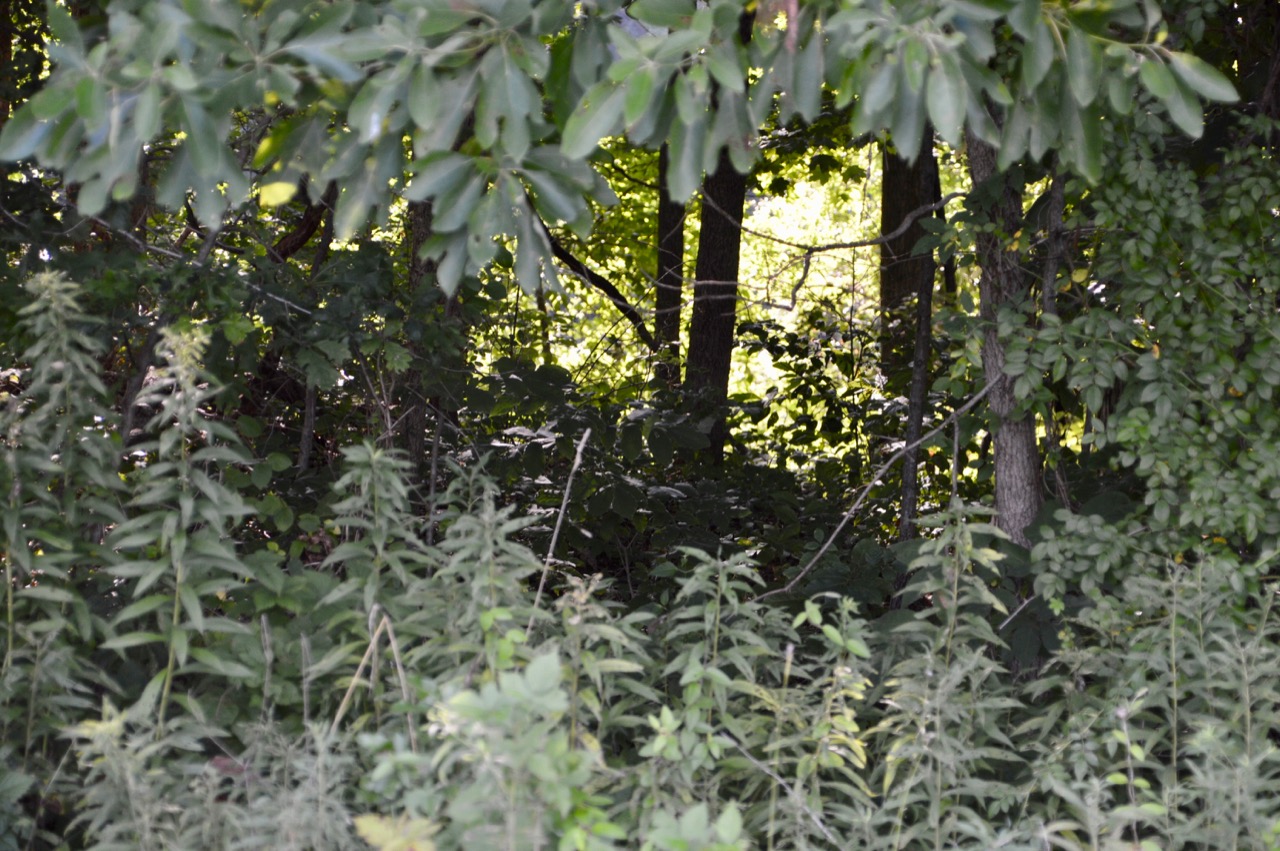 I saw nothing through the woods and down over that ridge into the gully but from the loud sounds of tree limbs breaking I could only guess it was a deer and not a rabbit running away. I'd have to look at past photos to see if we have seen deer in the summer months ... honestly I can't remember. 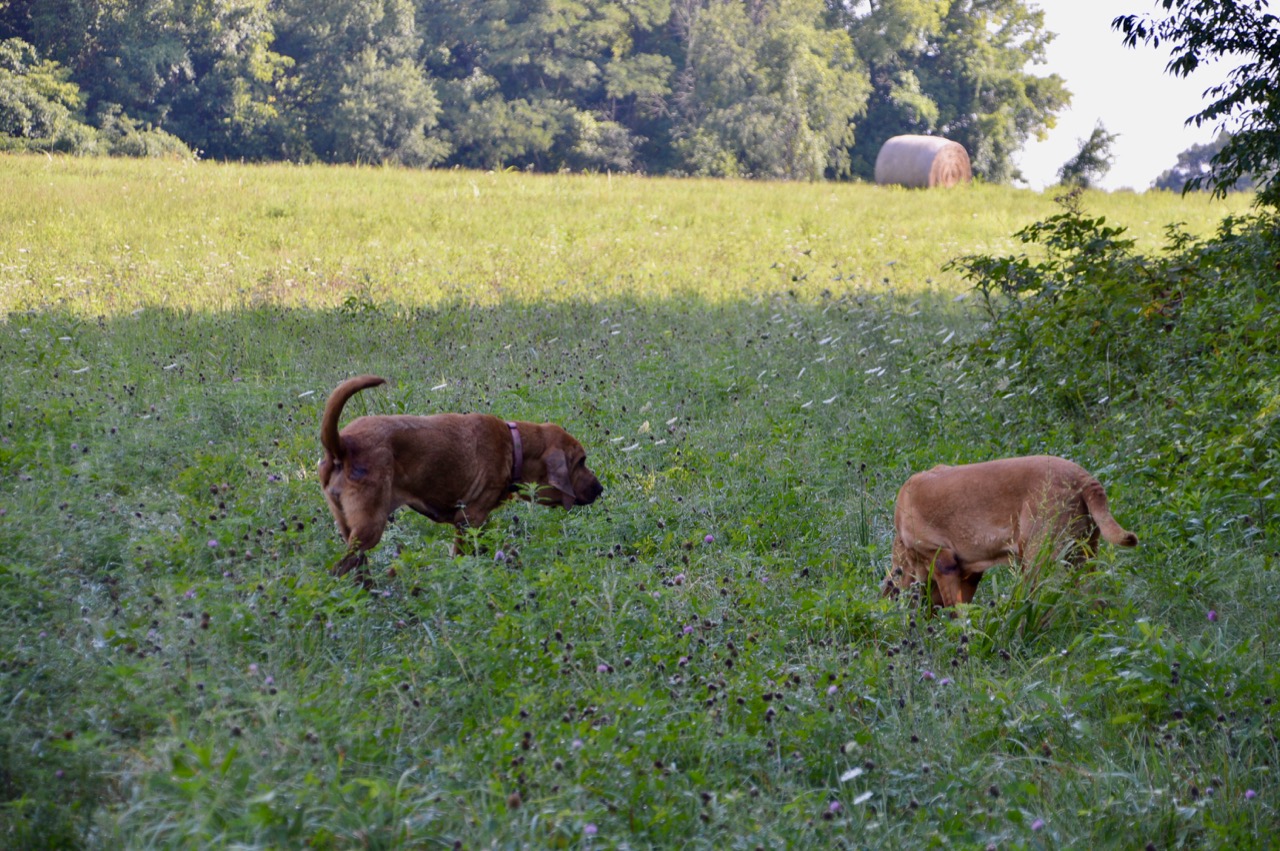 It is said that bloodhounds can hear 4x better than the human ear. You would have assumed they also heard the breaking of tree limbs with 'something' running through the woods ... but you would have never been able to tell looking at them. Deer scat is much more important sometimes. I wish I knew why it was so addicting to them. Getting them away from it is like taking a container of Ben&Jerry's ice cream away from me ... not going to happen.  LOL 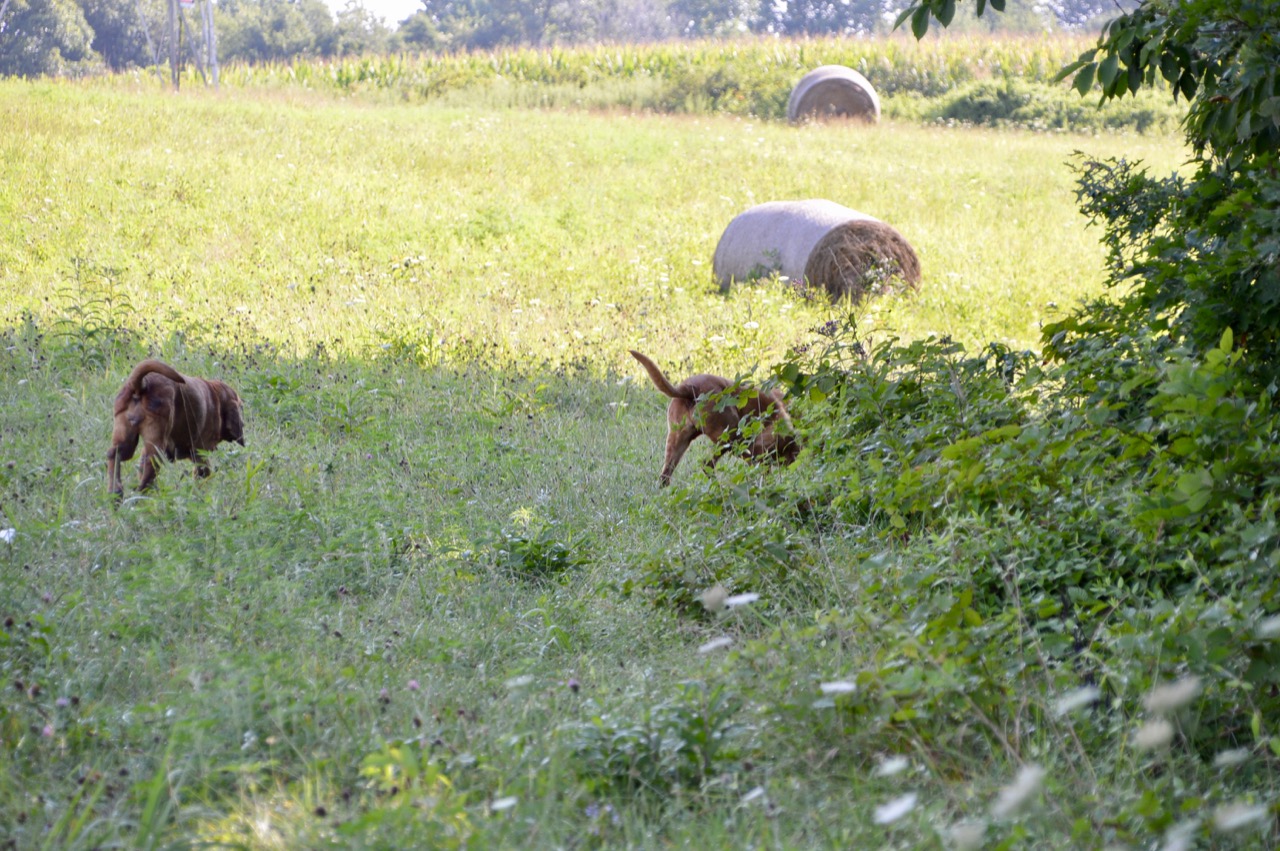 I've mentioned somewhere that I have felt twinges of motivation recently but that doesn't mean anything is getting done. I went to the lower driveway yesterday to apply my drop of Trimec weed killer on the driveway, by the mailbox pole and the left side culvert. Whatever was killed before has grown back to the point I am thinking I bought the wrong kind. I needed the blend that also kills grass because that was what I was seeing the most of. I see signs of dead weeds at the top of the driveway but nowhere else ... it was grass. 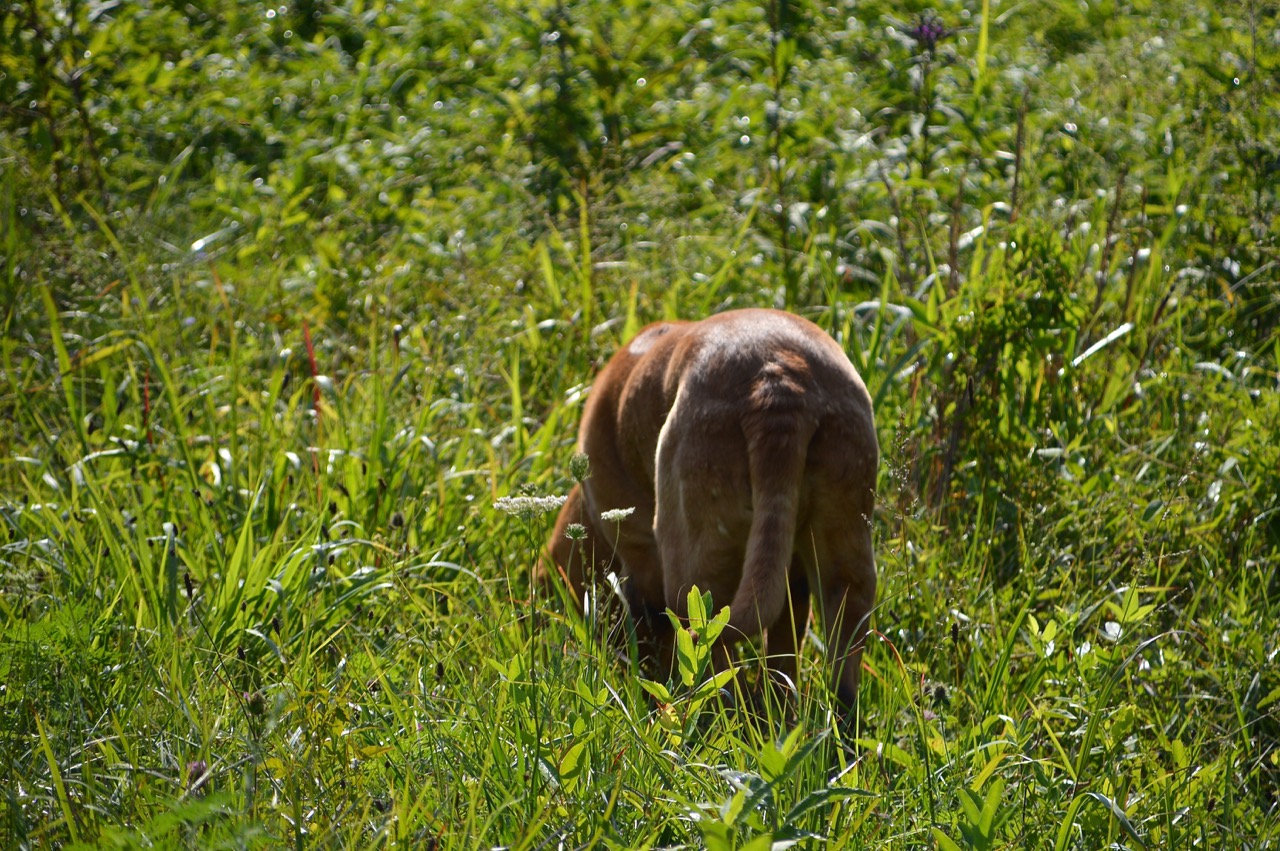 I had thought of turning the driveway to asphalt years ago but every asphalt drive I see that is on a hill in the vicinity of my house, has cars parked at the bottom of it during winter snow storms. I'll stick with gravel. 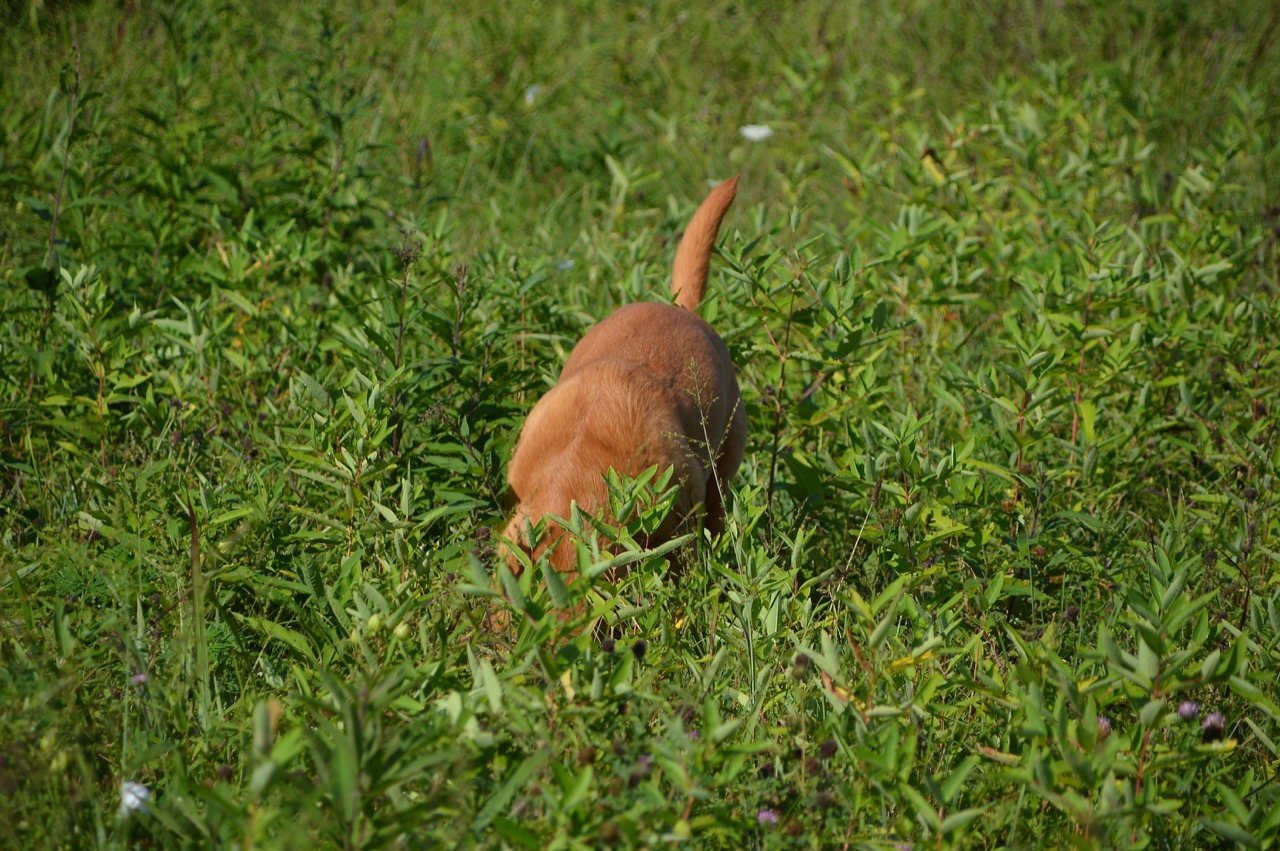 A friend that is in his 4th month of retirement asked me the other day if I was doing what I had planned on when I retired. He too is wondering "if this is all there is", yet he plays golf, lives in crowded southern California with a much higher cost of living than I. I told him I was doing what I had plan, in a way. I was either going to travel in an RV of some sort or stay where I am right now. Traveling was not an option once I decided having three hounds was too hard with two hands. Some might that that is a cop out, but they don't have two bloodhounds.

I told him that I am doing exactly what I thought I would be doing if I stayed in this house in this location. I knew that I would extend the things I did on weekends or after work into a daily routine, which I have. Of course we are all different. He is married I am single. I am a loner he is not. He was somewhat mystified that his old co-workers don't stay in touch with him like he expected where I knew and guessed I'd never hear from mine again, just like I wanted. 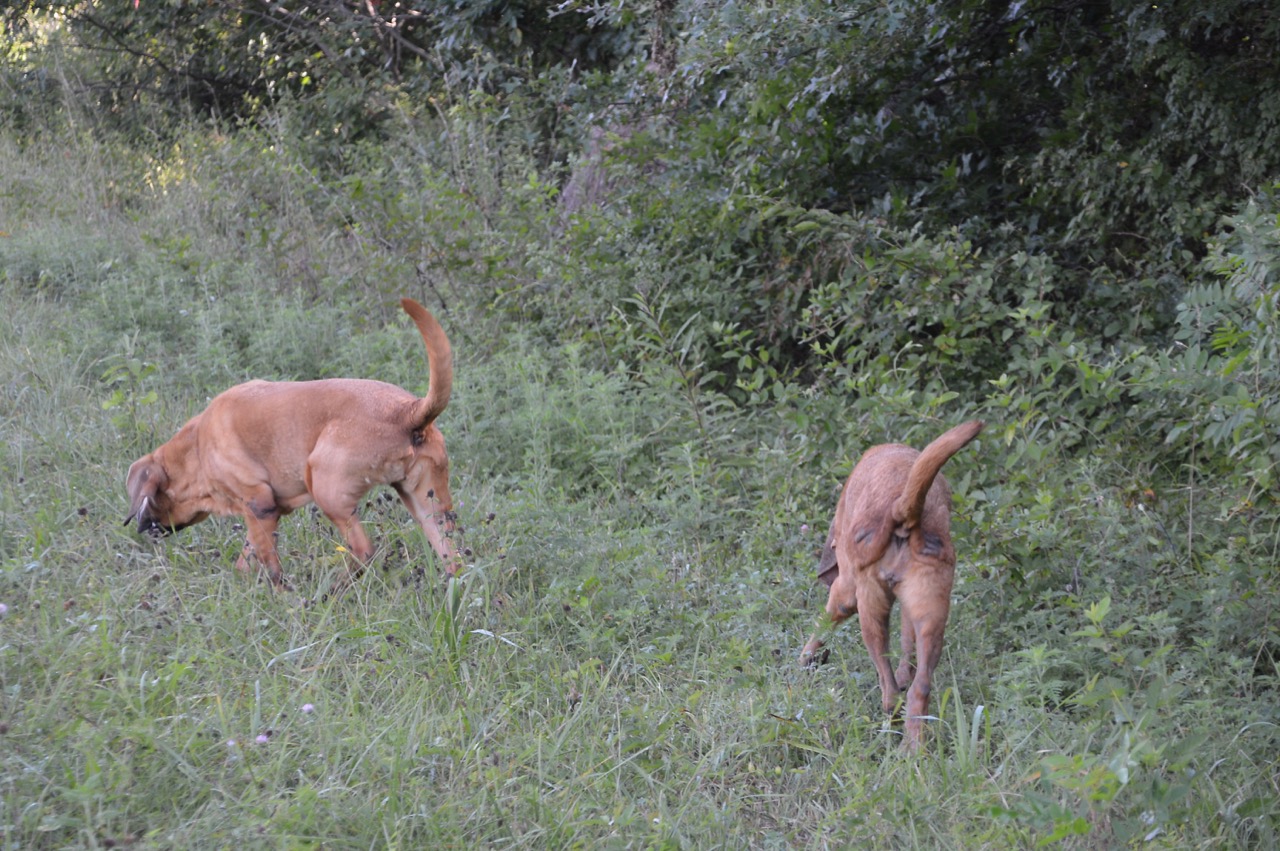 For some reason though, recently my friends need to have me notify them someway by text or email that I am up, have a pulse and I am alive because ... because ... I don't know. Do we all become more concerned after our 65th birthday that death is right around the corner. I don't think that way nor feel that way. So I have tried to explained to them I do not feel I need to text that I am awake and alive every day just because I live alone with three hounds.

I have never been sick. I do not have what they call a family doctor. I keep track of my eating, my blood pressure, resting pulse rate and the Garmin watch can tell me within a tap what my pulse rate is walking with the hounds or mowing the yard. Everything is below the limits of someone my age. Nothing to worry about in my eyes ... but not theirs I guess. 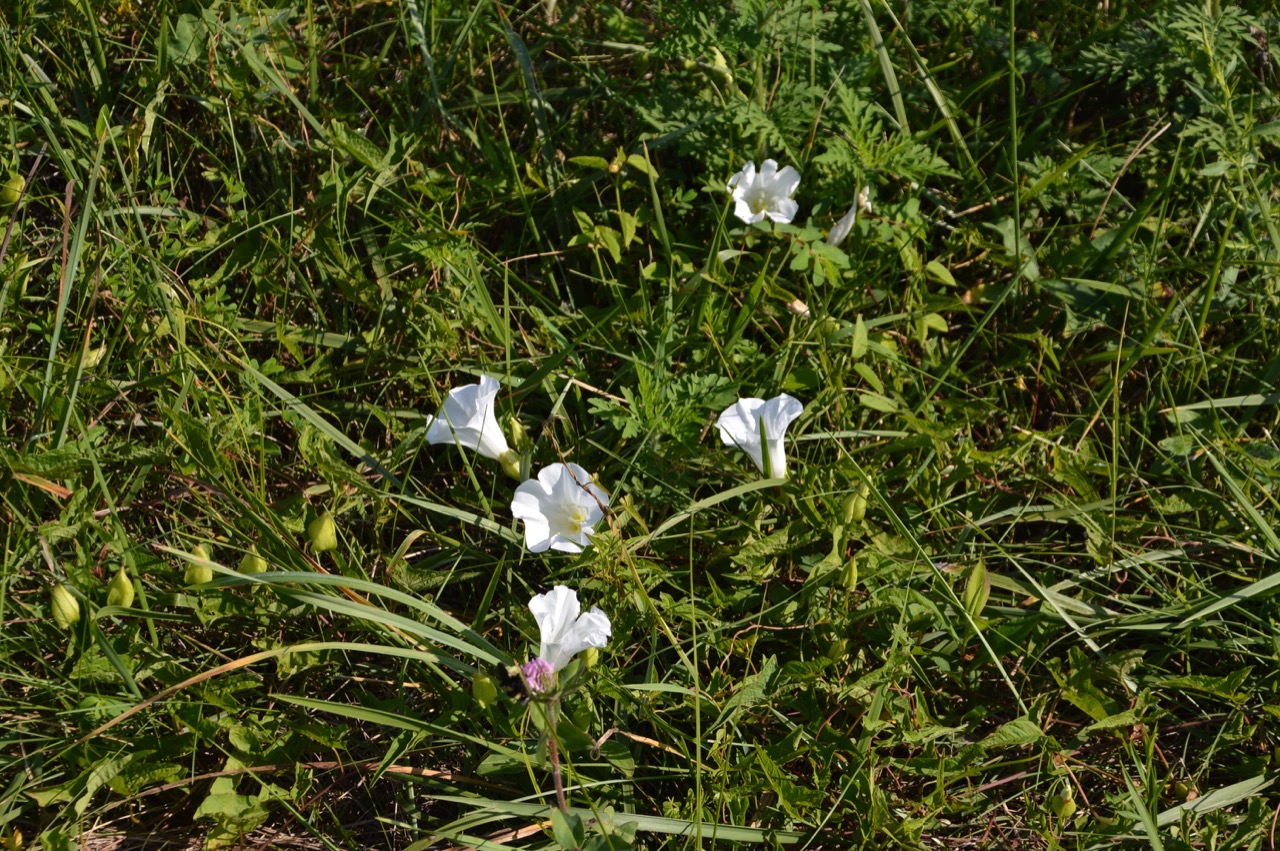 To change the subject ... it's still hard to believe these flowers are poisonous. 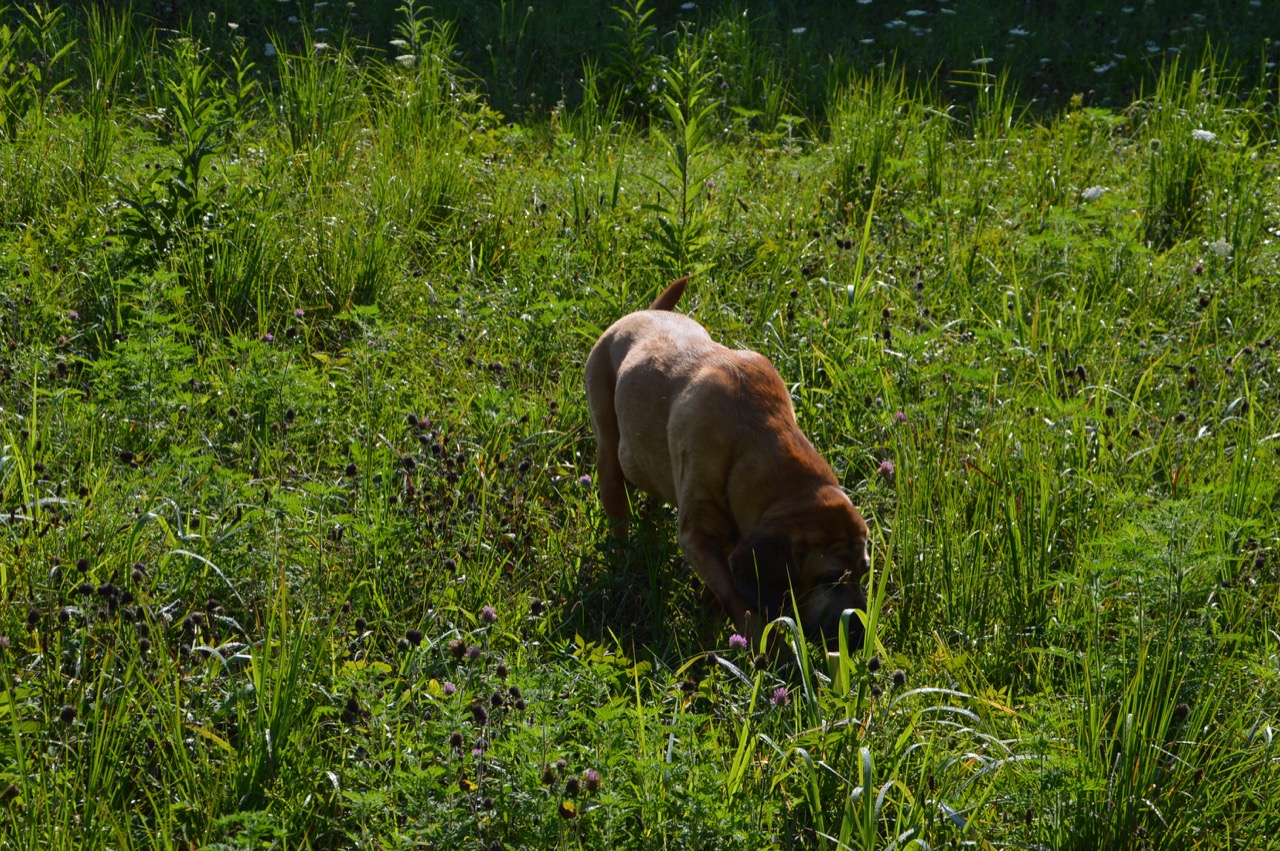 You can barely see Sadie's lump on the right side of her stomach. It has not changed in size although from that angle it looks bigger. From different angles you cannot see it at all. It has not gotten softer or harder. I feels just like her stomach feels on her left side. She has never shown any signs of pain. She still runs as fast as she can when she needs to catch up with us. 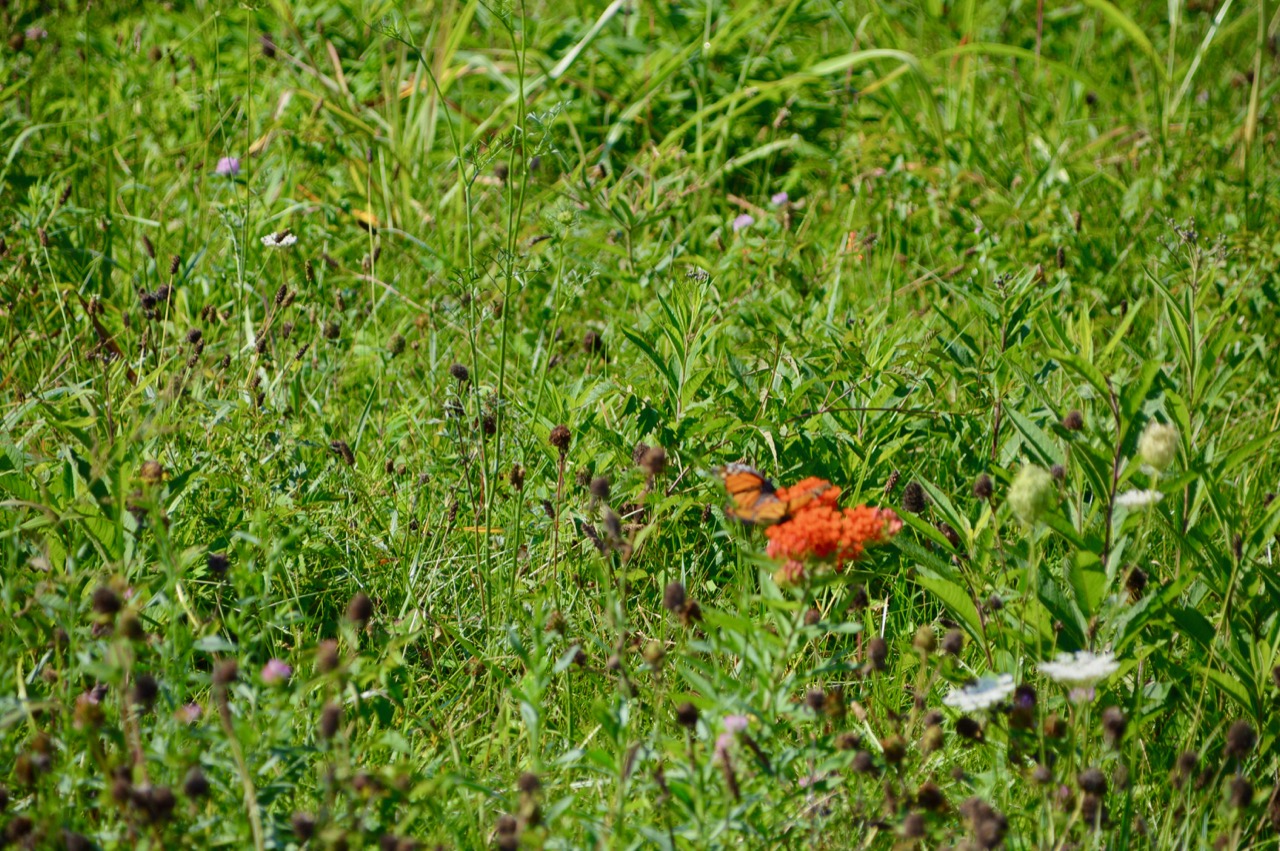 As I approached the backyard I could see a butterfly fight going on. 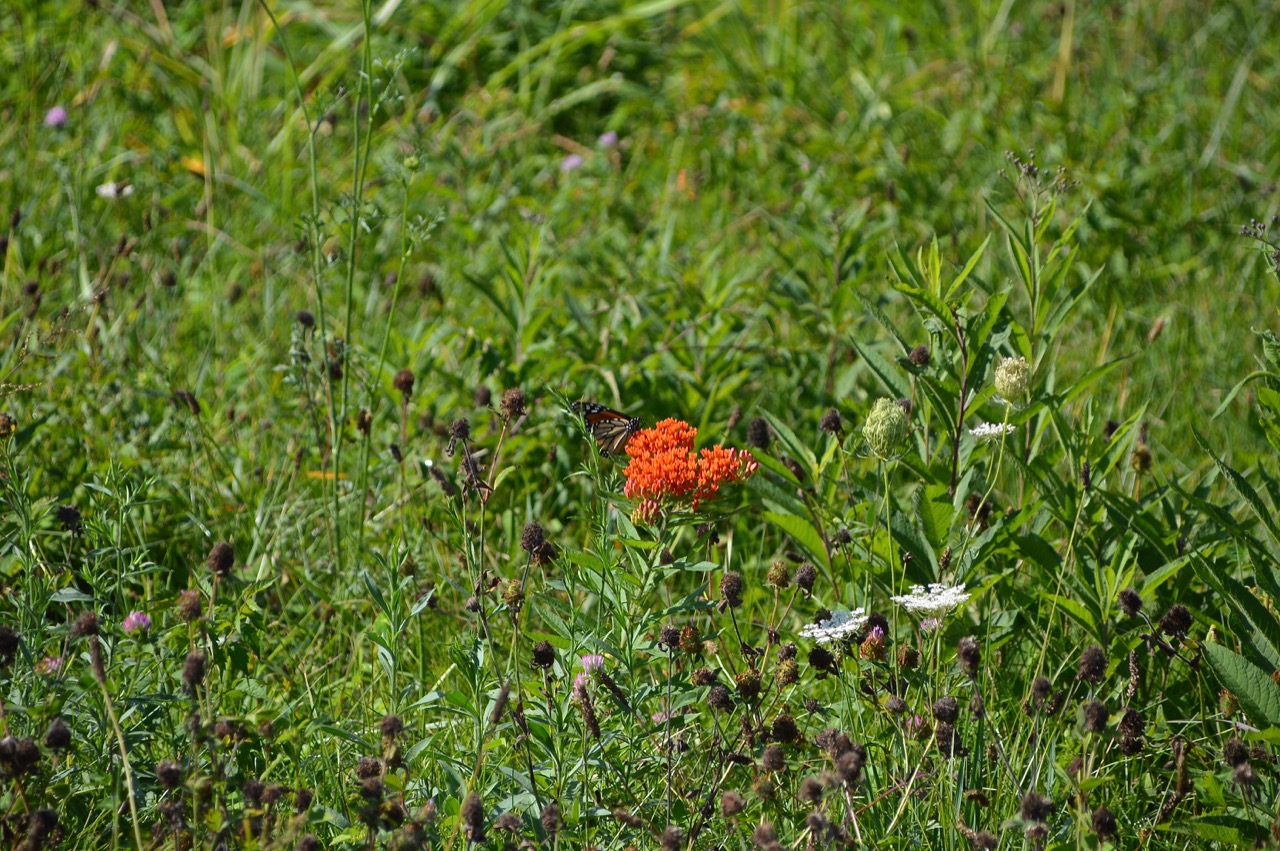 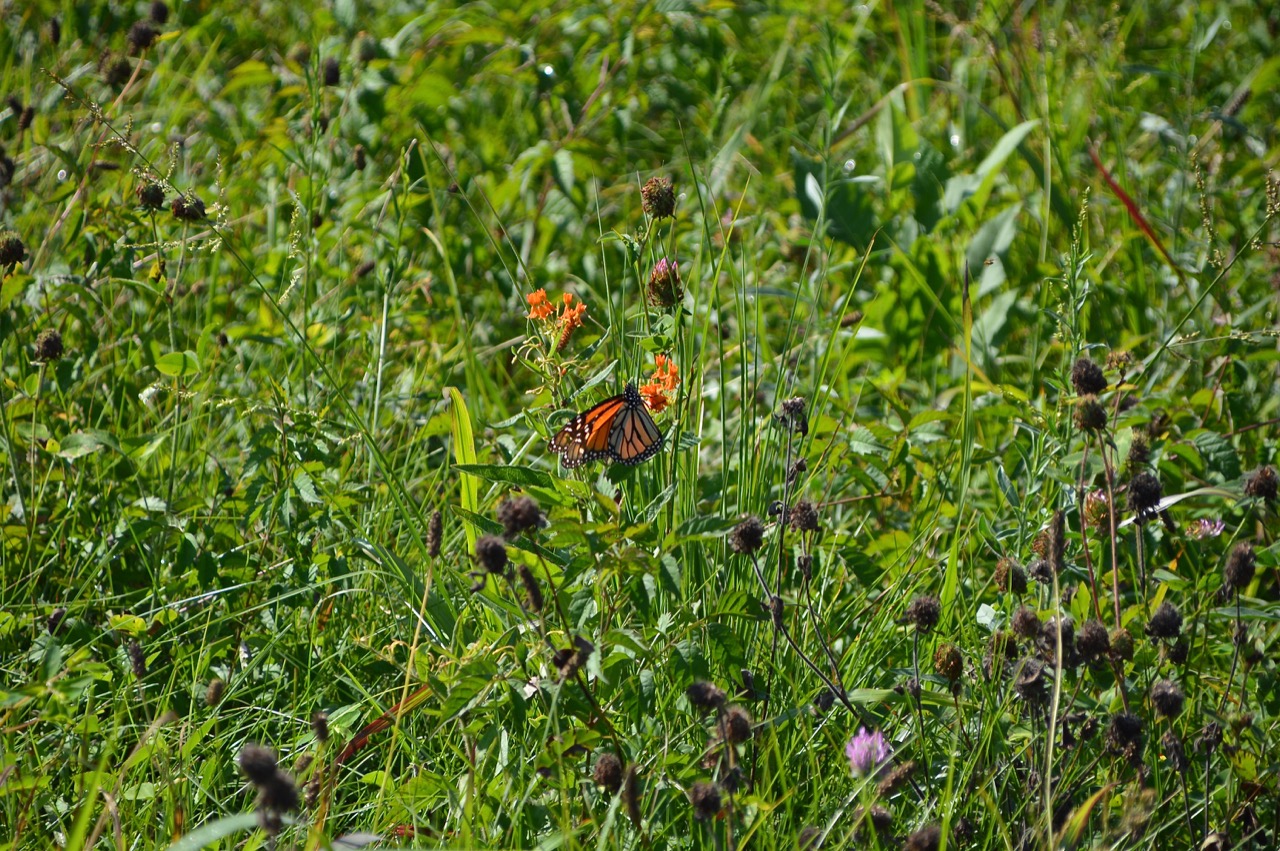 They ended up close to each other but on different flowers. 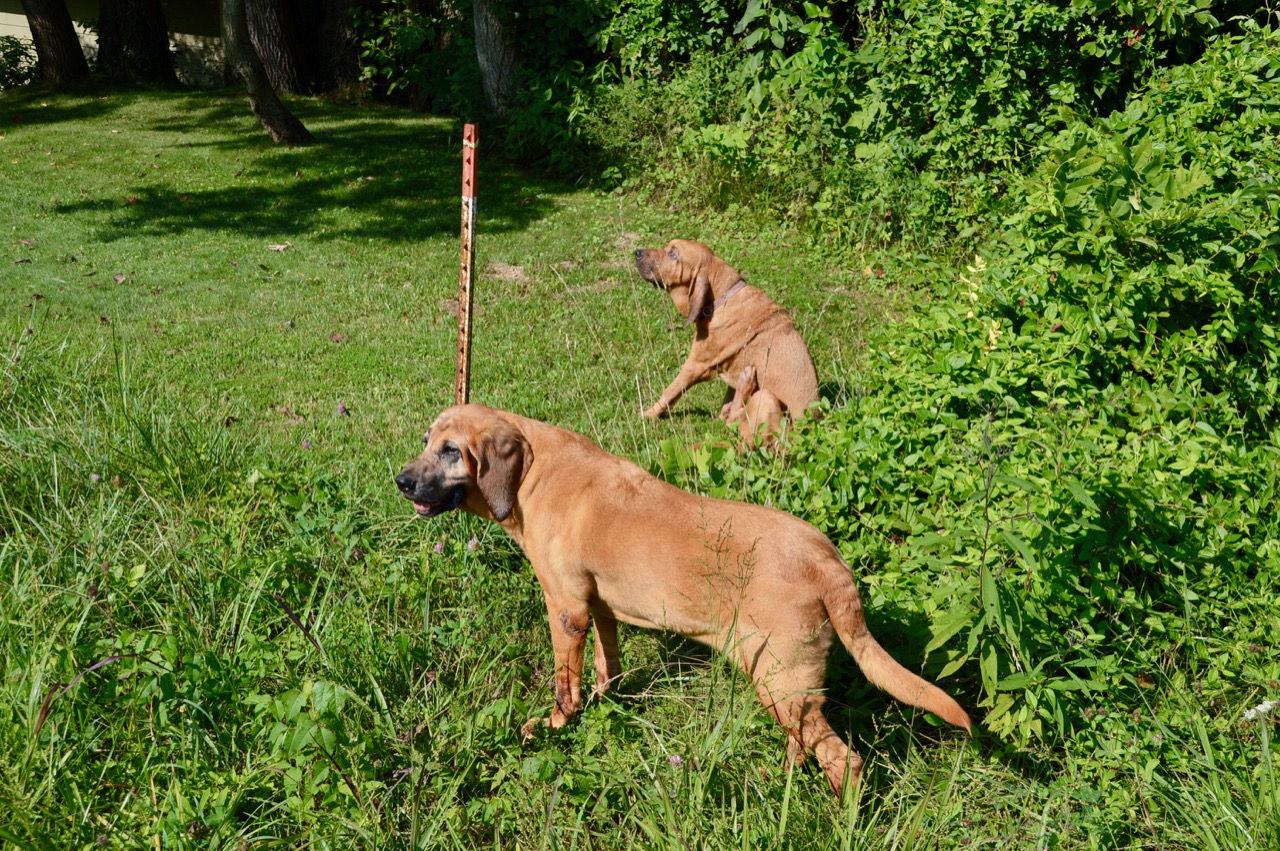 Stella seems to think the pollen count is high today. You wouldn't know that as she sleeps right behind my desk chair right now. She stopped two times on the walk plus in this picture, to scratch herself. I have some dog shampoo that is suppose to stop itching. I know that is only a marketing ploy on the label but since she likes the bathtub I'll give her a bath today and let the hot sunshine dry what I cannot with a towel. If you can bathe one hound you can do two ... so Heidi will get one today also. Sadie ??? LOL ... no way. She gets hers at the groomer.

I will say at times it's hard being a loner. Not for me but for the few friends that cannot even comprehend what it's like nor how could I ever be happy. They are flabbergasted at times. I can tell when I talk to them on the phone. The general consensus is I need to travel more, I need to get out more, I need to do this more ... yet they have all known for years that I am out of touch at times. They also know and joke about the dates of August 30th to April 4th, give or take a few days, that I spend my time watching college football and college basketball.

Only one friend understands why I live where I do and that I have lived here for 20 years. Others think I must have taken residence on Mars and cannot even understand why I like it here. All of them have been at my house in the past year or two.

The request for daily communication, the opinions on what I should or should do retired does irritate me at times. I like a content, quiet, no visitors kind of retirement. What does it take to convince them of that in a respectable way? My daily, mundane to some, routine is perfect for the hounds and I.

The hounds tell me it's time for lunch. 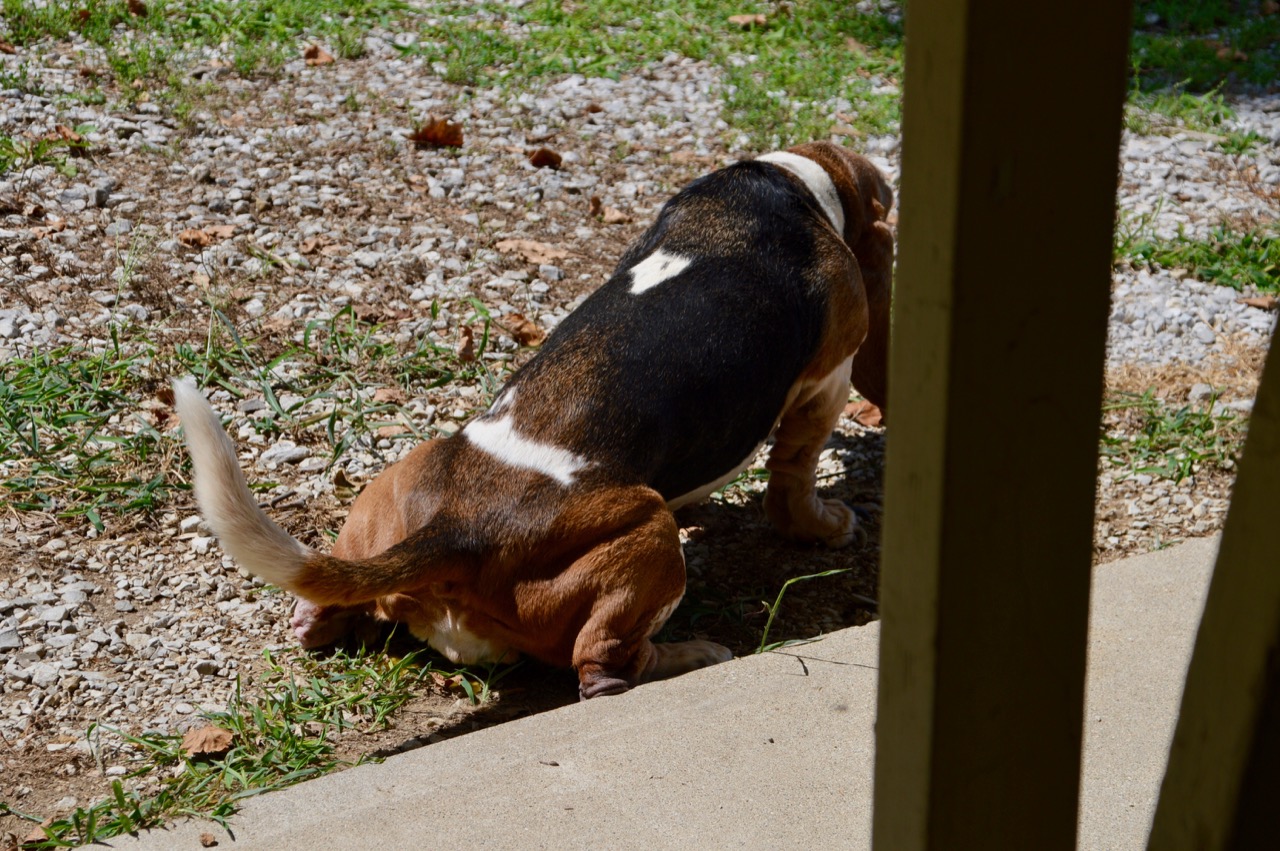 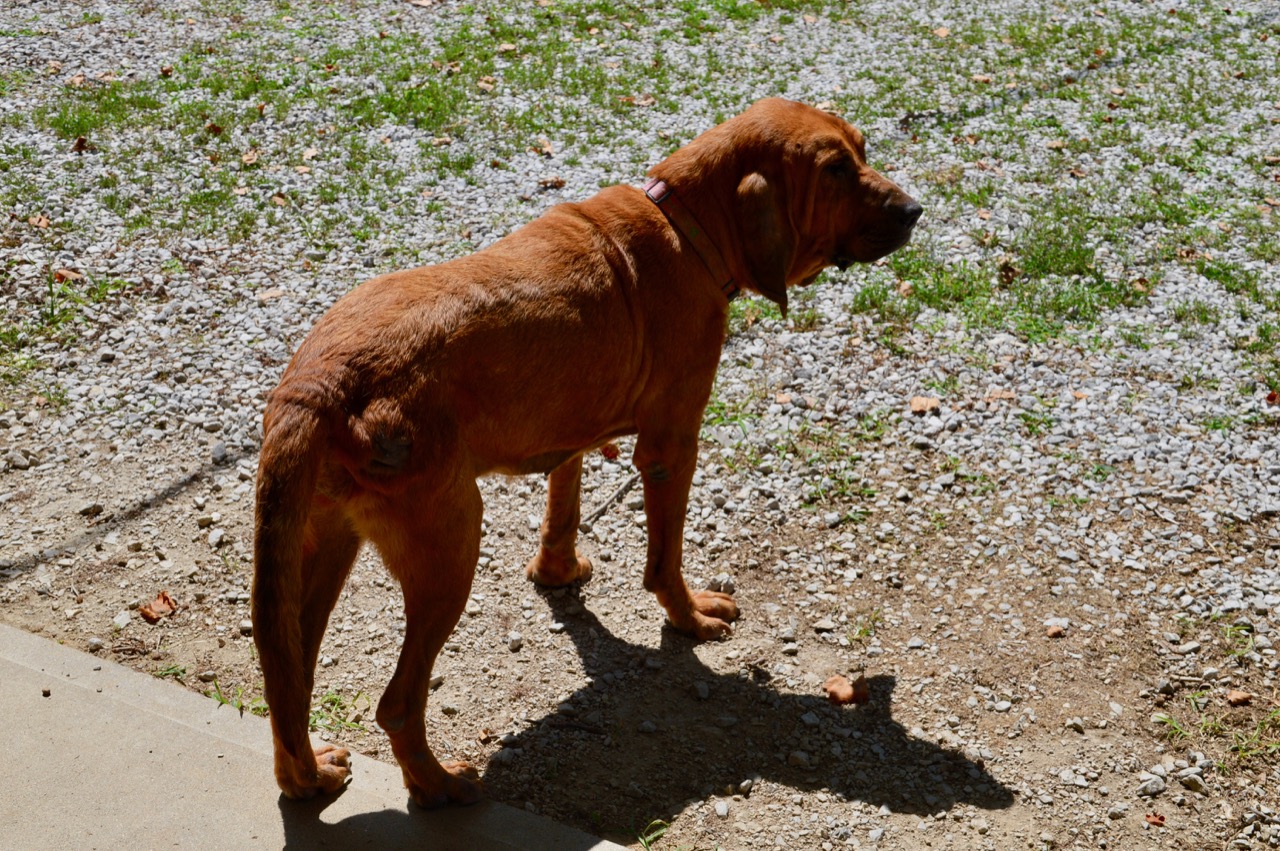 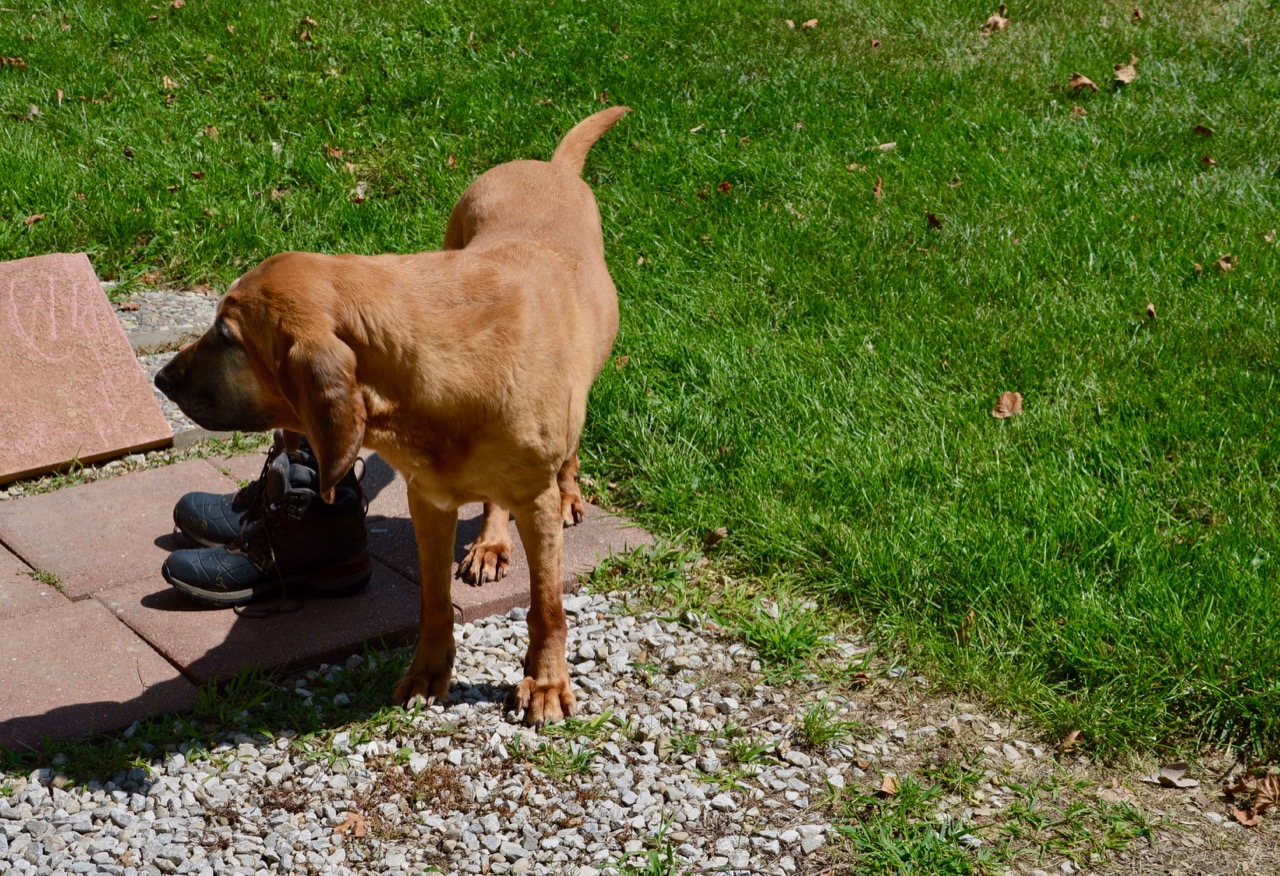 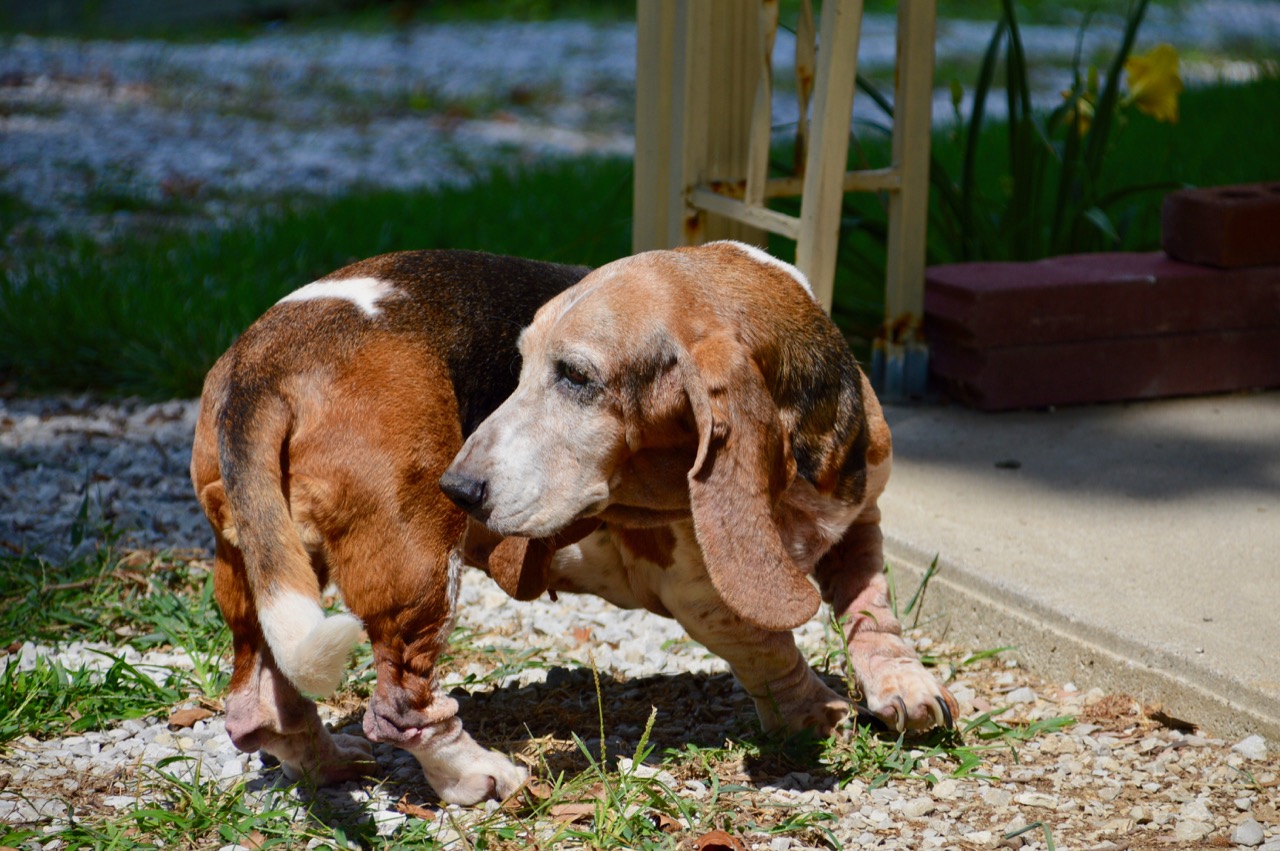 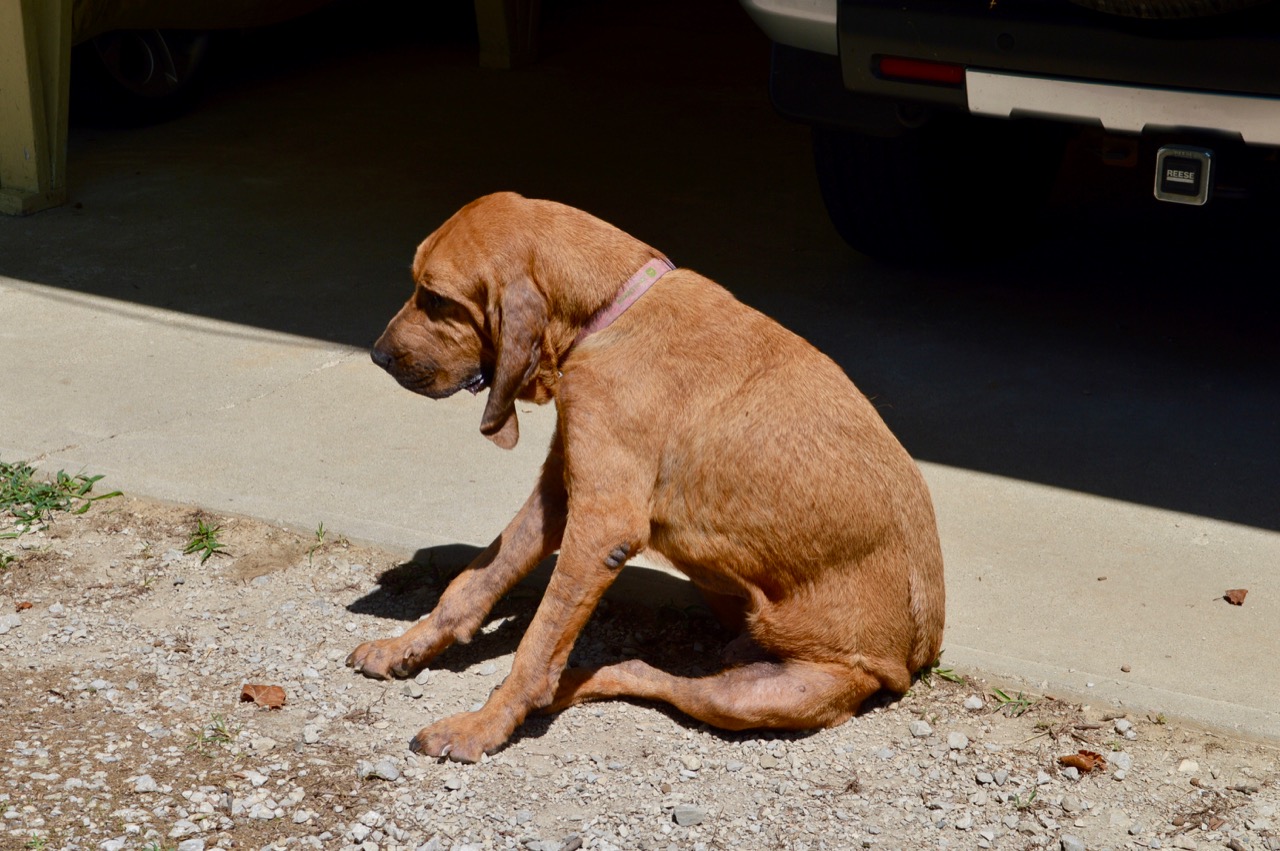 Even with that little amount of drama from friends, it's another fine day of retirement here in 'the tropics' of southern Indiana.
at August 05, 2018
Email ThisBlogThis!Share to TwitterShare to FacebookShare to Pinterest
Labels: Heavy Dew, Heidi Sleeping, Old Friends, Retirement