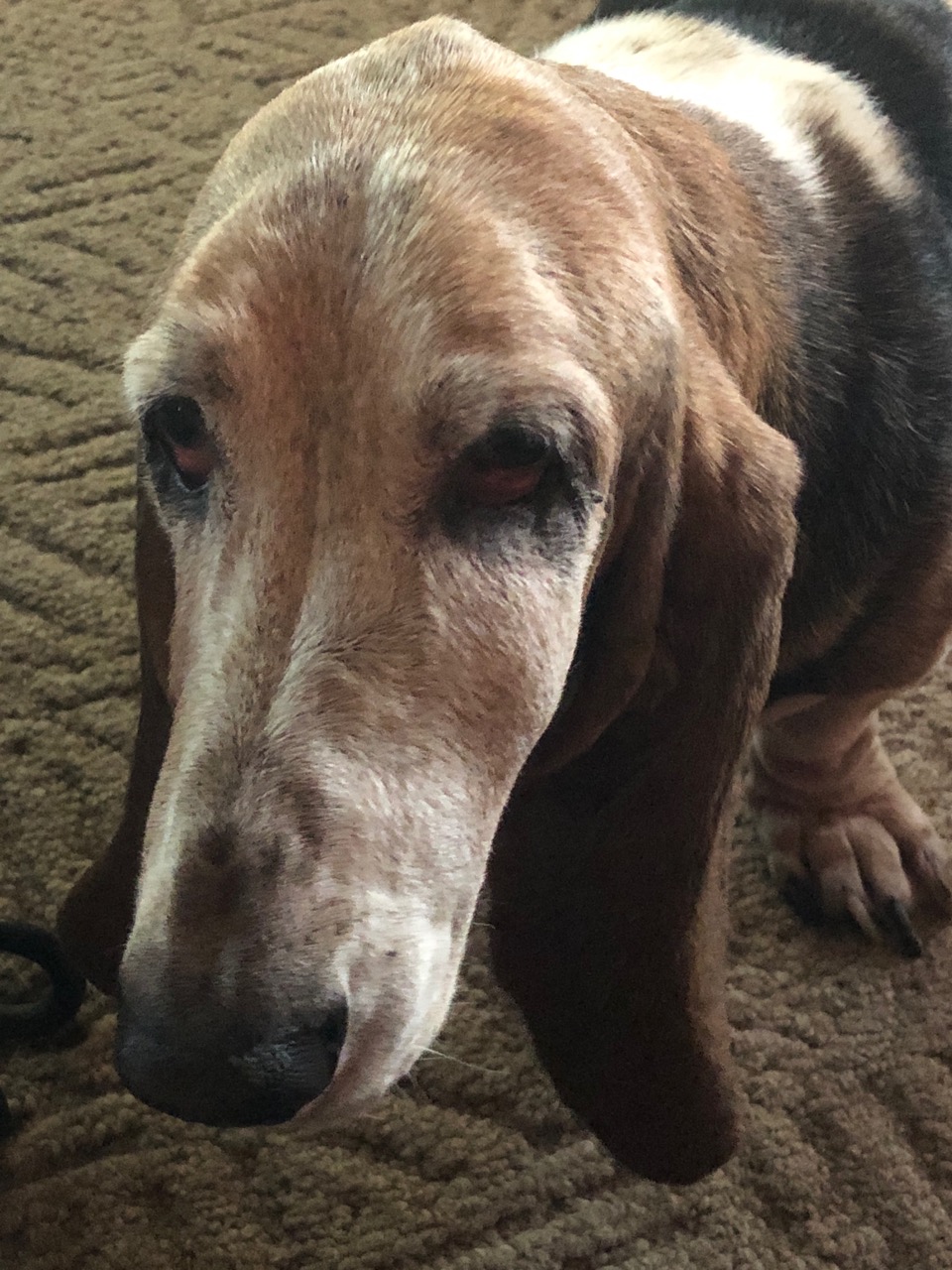 Sorry for the lack of photos but this is more of an informative post about some unexpected events this week. Last Friday the large lump under Heidi's left eye came back. It had been doing it's disappearing act for a month or so. About the time I would call the vet for an appointment it would disappear or go down in size so I wouldn't call. I just thought it was caused by seasonal allergies ... it wasn't. While on that vet trip to find the cause plus it was time for Heidi's annual checkup and shots, I took Stella with me. 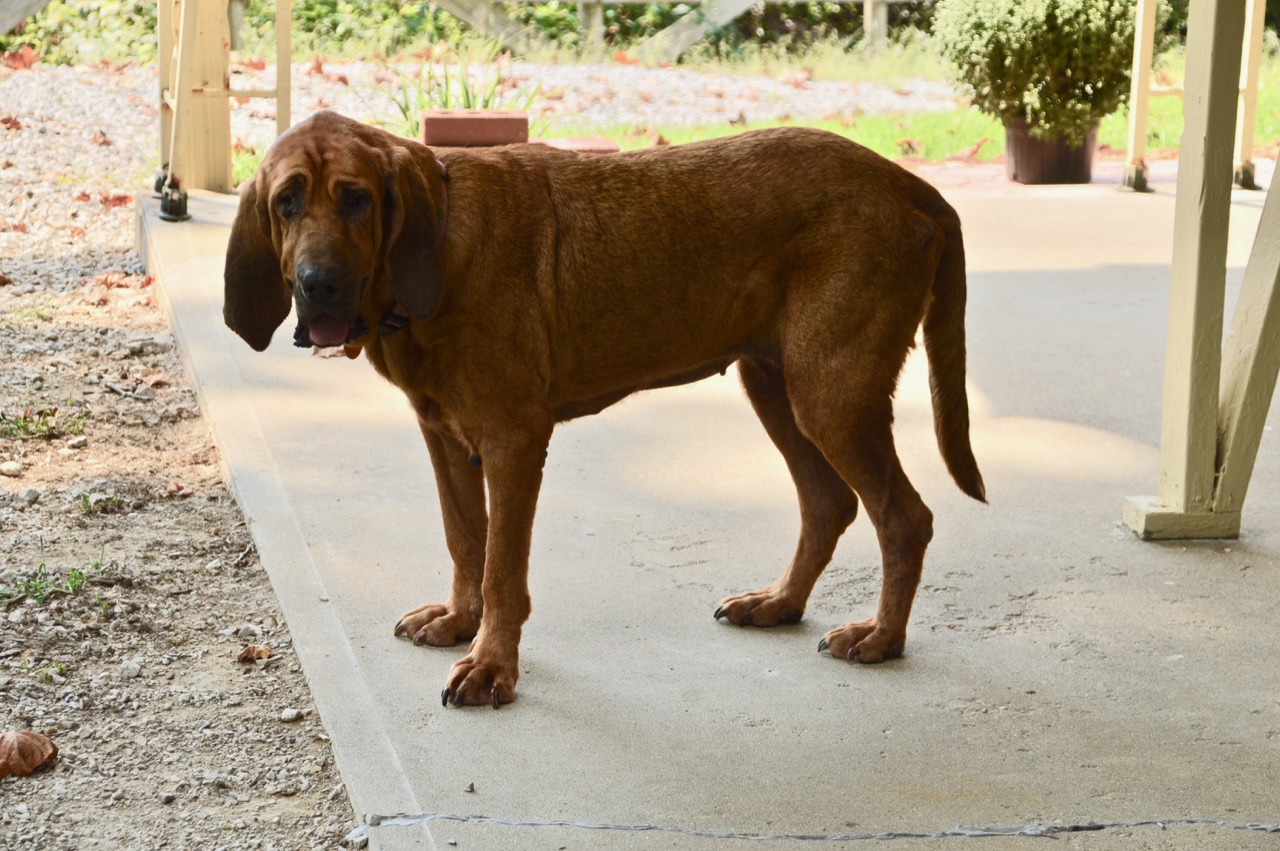 This picture doesn't show it but she is gradually getting back to her old self but she still has not wandered off into the field alone. The only times she goes into the field is with me when we are taking the walks. She still goes to the back of the car and can still smell Sadie's scent with her strong bloodhound nose. I see bloodhound nose smear marks on the back where she has tried to open the door of the car. If you look hard you will see a fairly large tumor on her right lower eyelid and another inside her left front leg ... it's the dark spot between her legs, the center of her chest. 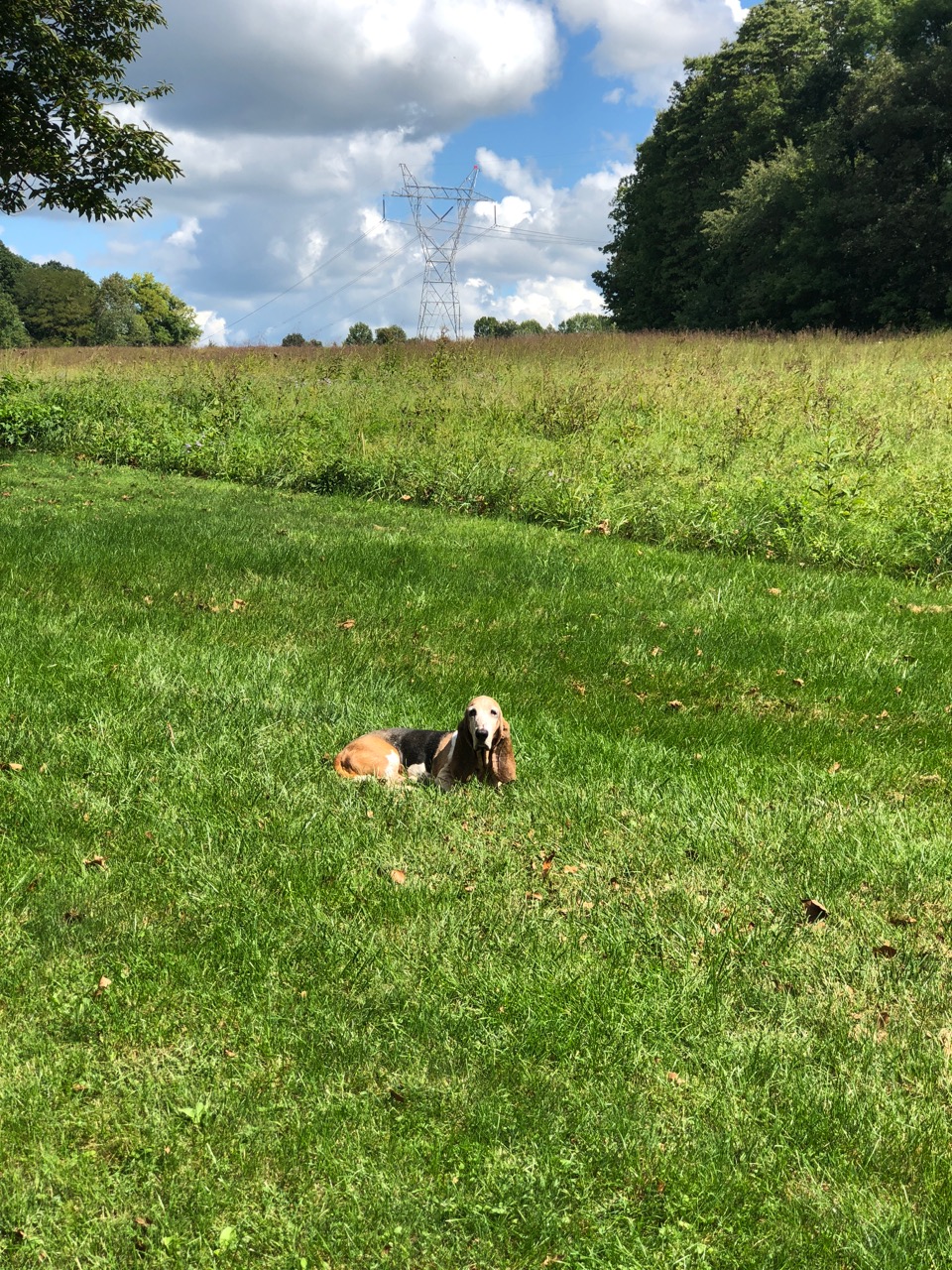 We have had a few days of rain but when it's sunny you can find Heidi outside enjoying the sunshine. She sat there and didn't move for over 30 minutes.

So back to the surgery story. With the lump showing up last Friday, we are at the vet bright and early the next day by 9am. What I thought was a sinus infection turned out to be a bad tooth in the very back. One that had three roots and needed to come out. I have no doubt she had been feeling miserable most of the time because of this, instead of seasonal allergies. With evidence of the lump, proved the infection had moved from the tooth area into soft tissue. Meaning ... no tooth pain.

Since I have changed vet service since my trip on the 15th with Sadie, Heidi's past vet years ago told me he did not clean dog's teeth when I asked for an appointment, then told me reasons why. Stupid me ... I didn't go somewhere else. Like with any person's teeth not being cleaned, plaque builds up and that is never a good thing. That is what happened to Heidi. The new vet cautioned me that once they started cleaning old plaque, sometimes that is the only thing that is holding a tooth in place ... a warning that more than one tooth might be coming out.

Which is exactly what happened while they were cleaning them. So she had three teeth extracted and should be feeling much much better. They have been seeing great results with chews called Oravet Chews so we came home with a couple of free boxes to try out. An added bonus, while she was under anesthesia I told them to cut her nails back as far as possible since I was never able to without having one of them bleed. She came to me in 2011 with extremely long nails and I have never been able to gradually get the quick to retreat so the nail could be shorter. The vet said that does not always work. So ... she also got a nail trim while she was out. 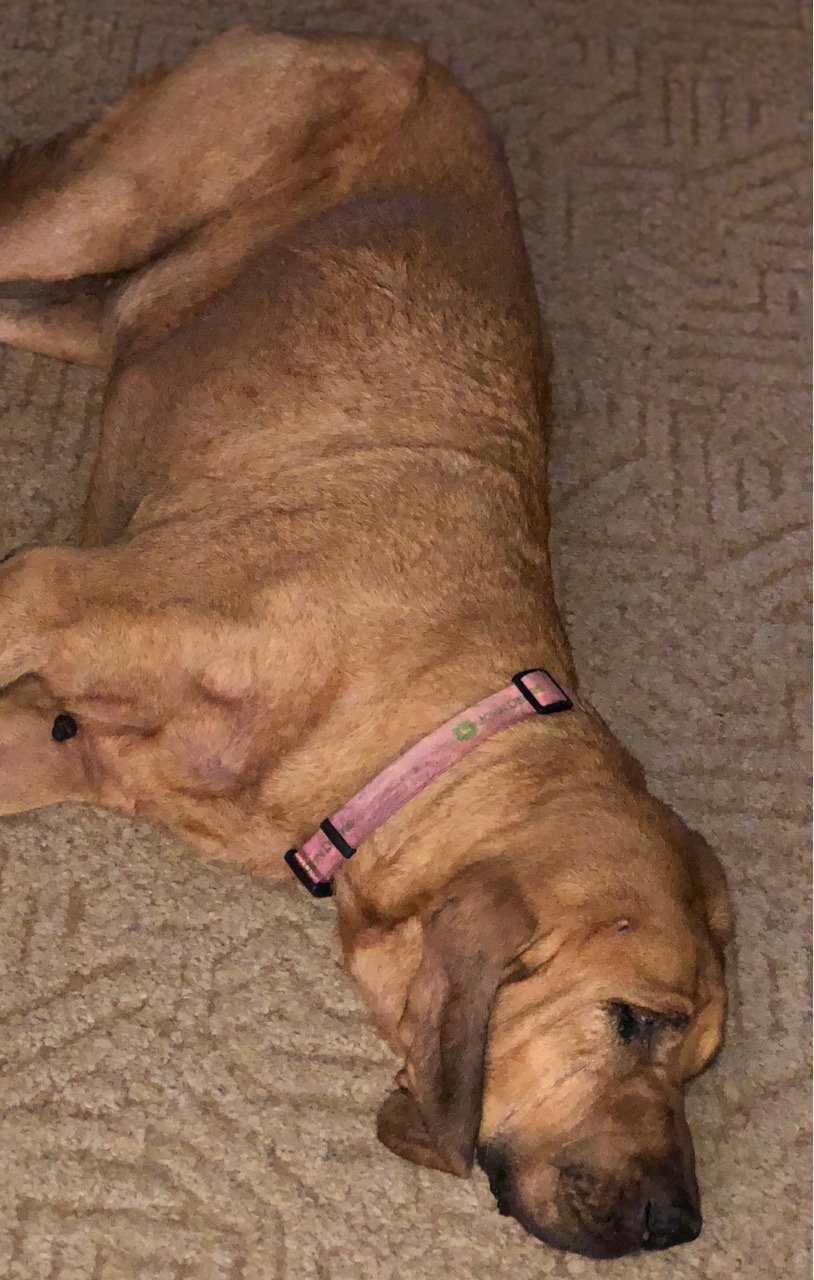 With Sadie not around, Stella does a lot more of this (sleeping). She doesn't stare me down to go on walks. She does not sit at the open door looking outside through the screen or window at squirrels or birds on the fence ... she eats and sleeps.

I was told years ago by a different bloodhound breeder, there are two kinds of bloodhounds ... trackers and couch potatoes. She gives her puppies a test at 45 days old and can tell who is what. She was not Sadie's breeder but was giving me answers at the time for Sadie's puppy behavior. As you could tell from reading the blog over the years ... Sadie was the tracker, Stella is the couch potato. So now I have two couch potatoes and a house that is almost too quiet at times.

If you look on her upper left front leg you will see one the tumors she had removed yesterday. That was large enough they had to put in staples for it to heal. We go back on October 10th to get the staples removed. That small spot on her head was also removed. It was about the size of a tick but was a growth instead. The other was the dark spot on the corner of her eye in that picture. It was getting larger and the same kind that Sadie had on her right eyelid.

The vet was more concerned about a different kind of growth and smaller, located in the corner of her eye next to her nose. She came with that small growth when I brought her home in August 2015. From my view it was not getting bigger and past vets never were concerned about it. The new vet was because as he was looking at it, he lifted her eyelid for a better view and the growth popped out showing him and I that it was bigger than it looked. It had been growing inward instead of outward, and it was putting pressure on her eyeball.

So after Friday's exams, surgery to fix Heidi's infection and clean teeth were going to happen the same time Stella was getting tumors removed. Yesterday at 8am.

For the first time in 31 years for 6 hours I did not have a hound with me at the house. It felt strange. 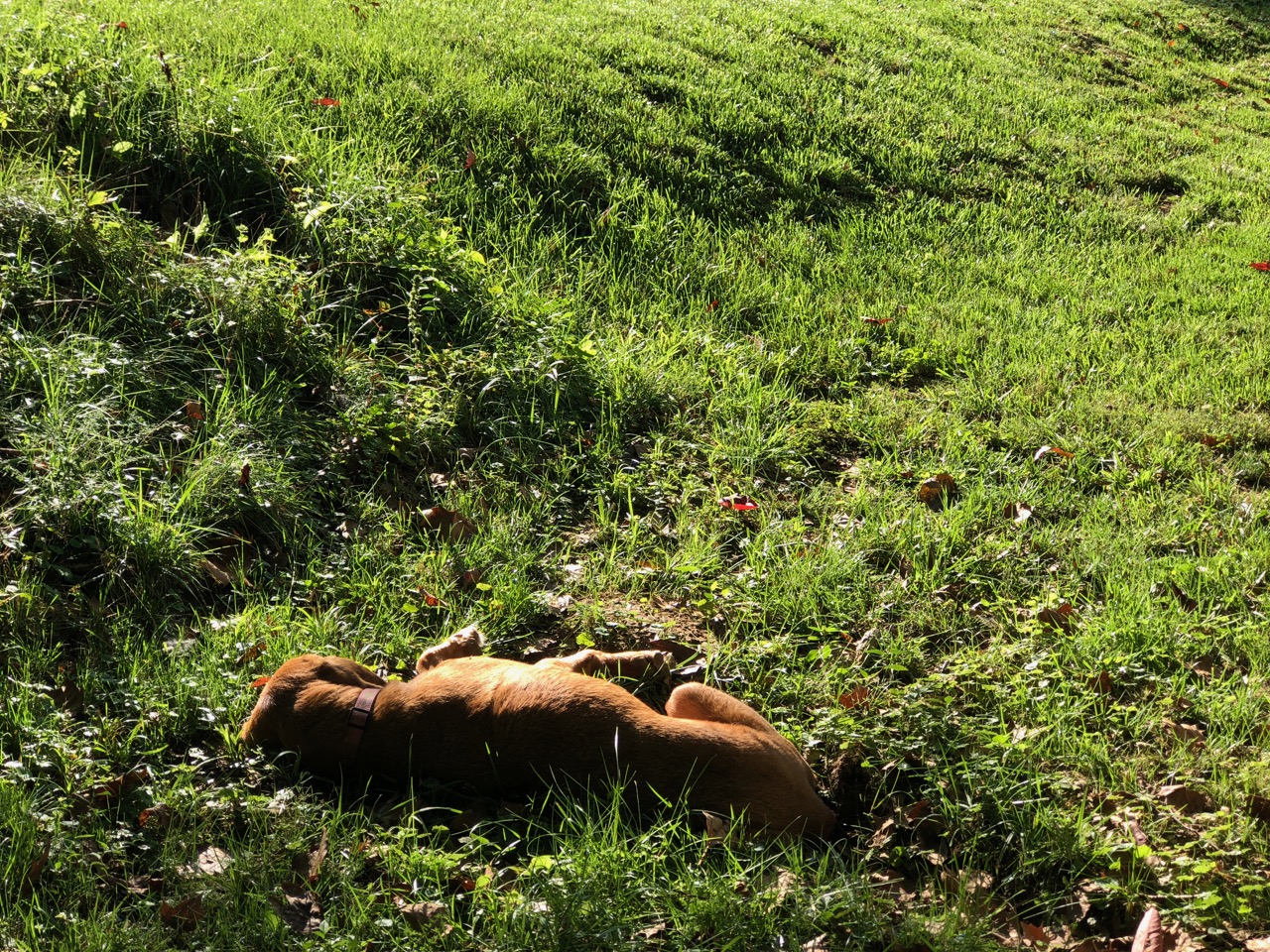 This is Stella supervising my paint job last week as I finished on the north side of the house, on the 19th.

Some of you might remember three years ago when I wrote about getting Stella that she was coming with severe separation anxiety. Over the last 18 months there has been no signs of that anymore. the couple of times I have been out of town for seven to eight hours visiting friends, she did not try to tear down the house to get out. Yet, the previous owner as adamant about not putting her in any kind of kennel. She would freak out based on prior owner's experience.

So I called the vet on Tuesday telling them there was no way Stella would stay in a kennel before they sedated her and that I would like to sit with Stella in the waiting room right up to the time they were ready to sedate her. That was the plan, they understood and agreed.

What a shock I had early Wednesday morning as the three of us were waiting outside the building for them to open at 8am. The vet showed up not knowing of my request the day before with his vet tech and receptionist. He said "stay here and I'll open the back door so you can put them in the kennels while we open up."

I decided to try that knowing that if Stella started going crazy as she neared the kennel, then we would wait in the waiting room. Both Heidi and Stella walked inside right to their own kennels, turned around toward us, sat down and he took their collars/leashes off. Stella showed NO SIGNS of anxiety being closed up in a narrow kennel with an 8' or taller ceiling and tall concrete block walls. The vet tech told me when I picked them up that she was confused and surprised when she went to get the Stella for surgery ... because Stella was sleeping and had no signs of being stressed out.

Where was the severe reaction the previous owner told me about?

So to conclude this long story ... both surgeries went well. Heidi's tail was wagging like new as she trotted for the door this morning to go outside before breakfast. Coming back inside this morning she was barking for her breakfast. Yesterday afternoon once Stella felt better from really waking up from the anesthesia after we got home she started 'talking' to me. She was so happy she did something I have never seen a bloodhound or a basset hound do .... howling while rolling on her back. Her way of touching someone is nudging with her nose instead of any kind of licking. By the number of non-stop nudges I could tell she was a happy hound.

There isn't a day that I don't think about Sadie and at times I wonder what happened the last hour or so of her life. Yet new routines are slowly developing with Stella and Heidi. It is much different not to have a bloodhound wanting to go for a walk early, before 8am, compared to a bloodhound that is sleeping right behind my desk chair as I type this and could care less if we take a walk or not.

If I can get some photos of the hounds today I will add them back to this post later on.

Things are getting better in 'the tropics' of Southern Indiana but at times it's hard. It's never easy losing a hound. I do know it takes a long time to get over it, if you ever do. Luckily I have two hounds to hang out with.
at September 27, 2018