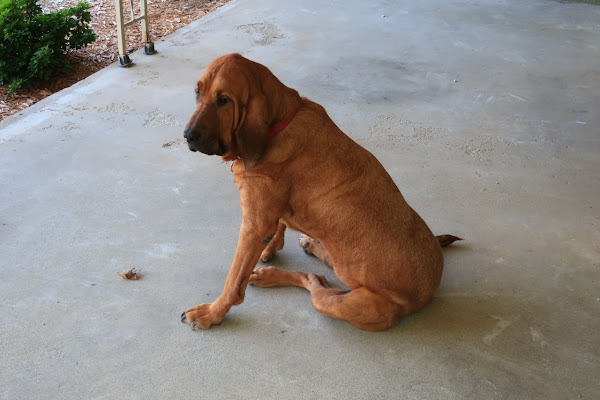 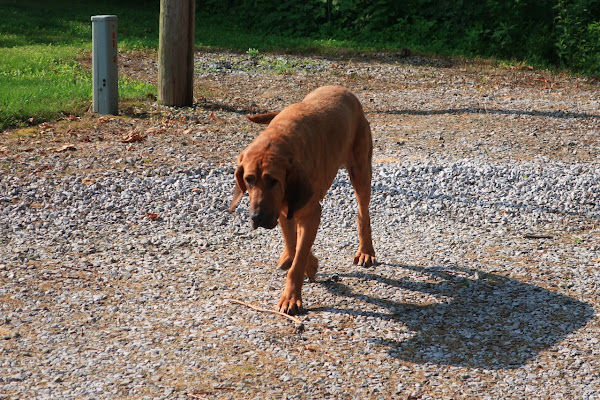 After Sadie was gone in September 2018 I always wondered if Stella wanted to walk in the field because she wanted to or because I wanted to. There were too many times I would have to practically beg her to join me on the morning and afternoon walks, causing me to wonder. She is always changing her routine but recently the change has been huge. This is her response 99.9% of the time when I ask her "you wanna go for a walk" and there's her answer. 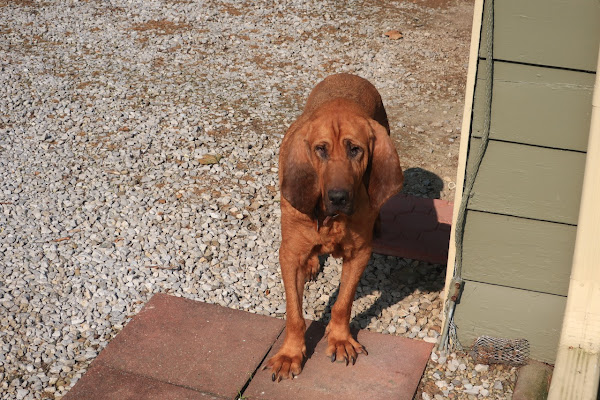 Where she use to whine around 9am just months ago to take the walk through the wet field, only canceled by rain, anymore she is sound to sleep at 9am and will join Heidi in sleeping right up until lunch is served. With the hot afternoons I try to walk early evening but it doesn't matter to her. Here it is late morning and the response is the same. "I'm not going anywhere no matter how many times you say let's go"

With lunch served, if it's not raining she spends about an hour sunbathing. I can't help but think those warm stones make her hips feel better or her back. 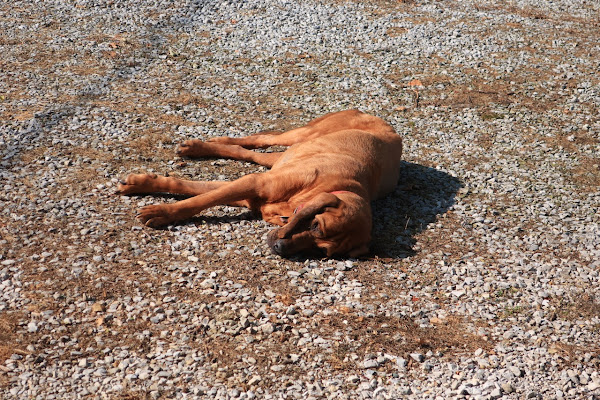 Heidi enjoys her bed now being right next to the central air vent. With the temps in the 80's now, she will spend most of her afternoons here, next to the cold air. I have not caught her on camera but she still likes to go outside on her own every afternoon, do a little wandering and then lay under the sunshine if it isn't too hot. Otherwise ... right there on her dog bed. 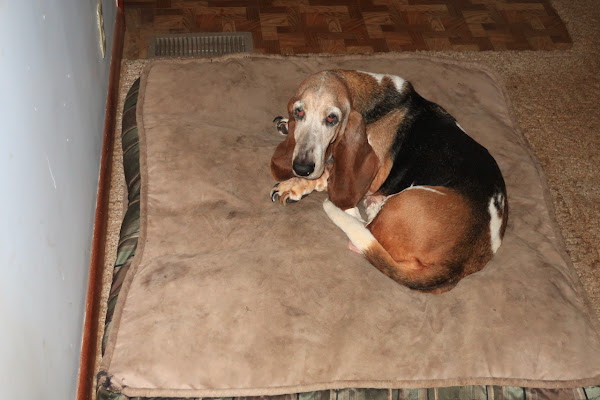 I decided to watch Stella's walk one day. I was even prepared to follow her next door if that is where she wanted to go. I'd even go as far as two houses down if she wanted to check out the water temps for the neighbor's pool. So I stood and watched to see what she would do.

It turned out to be nothing more than the "new normal", her afternoon walk and only walk of the day for so long that I can't remember when it started to be this way. 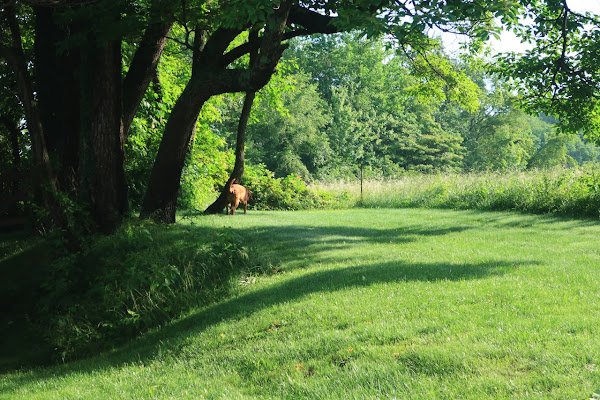 Yes, the hay is that tall again, where you can barely see her tail. All the rain has been good for the hay growth but the fields across the highway are still not planted and it's raining again as I type this. About the time it dries out enough to get tractors and plows in the field, it rains. 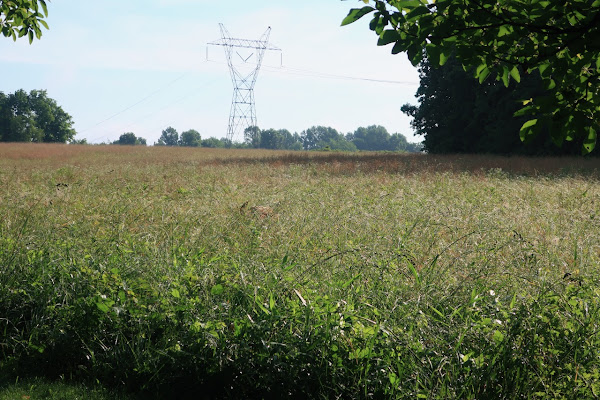 While I was giving her the chance to go anywhere, she walked from the previous photo over to our return path and came home without a word of any kind coming from my mouth. She does that day after day and goes no further than she has to, to relieve herself. 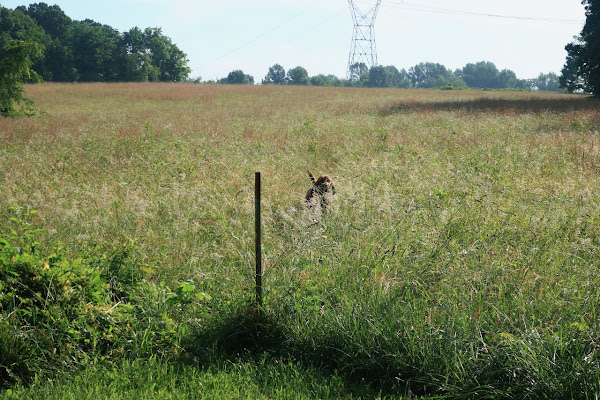 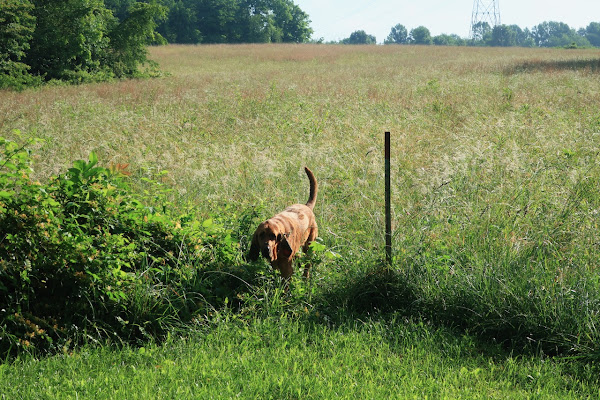 She likes to shake off all the hay seeds and yellow pollen before she comes back inside. 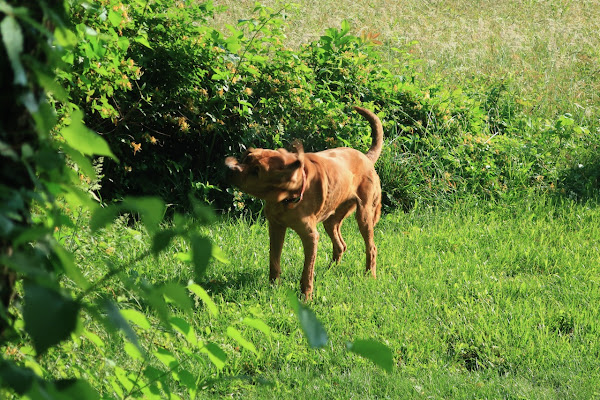 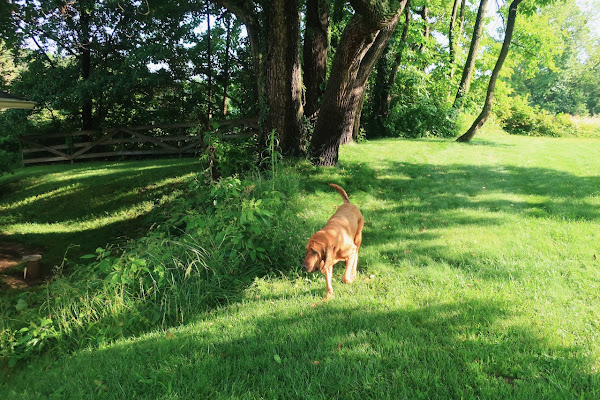 And the "official" end of the walk by walking along the side of the house. 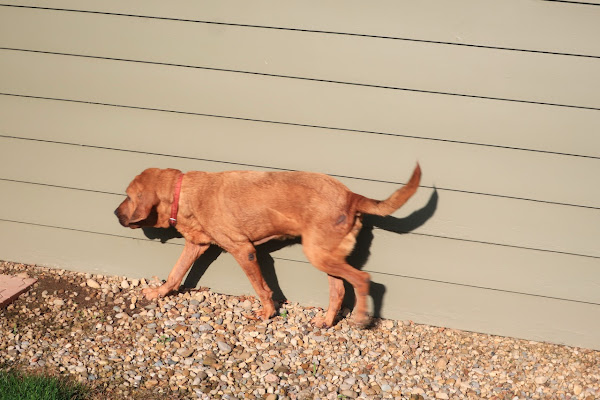 Sometimes her walks are not even what you have seen. They are not any longer than a quick search on the driveway and back to the house. A few times I attached the 25' retractable leash to her thinking that might lead her to the field ... she sits there and makes sure her 85 lbs are as low as possible so there is no way I can move her. Similar to a heavy rock you are trying to move. 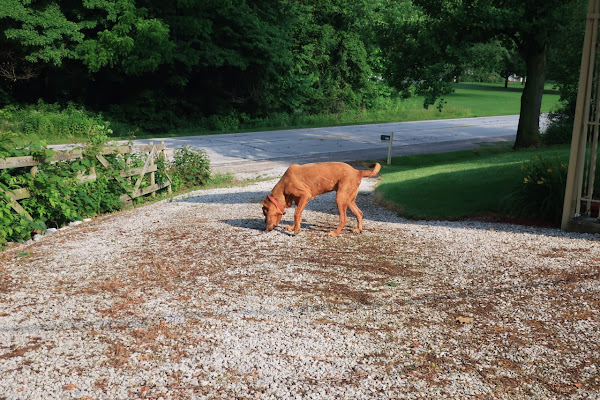 Along with her changes to routine, I have seen and felt changes with me and blogging. I admit I love having the extra time to enjoy the day and I seem to get a lot more done around here without taking the time to put a blog together. I take daily photos but not nearly as many as I did in full blogging mode. Nothing official to announce but a post or some hound photos here and there are about all I can come up with.

Both hounds will be 10 years old this summer. Is that the reason for a slower pace summer this year? I think Heidi may be 10 years old since her age is really an estimate. When I picked her up 8 years ago from GABR they estimated she was around 1-1/2 years old but no way to tell. She shows no signs of older age except some graying on her nose and around her eyes.

Stella is so laid back in personality that there isn't a gray hair anywhere on her. I have noticed more crud around her eyes this summer than usual, from the pollen in the air. She still gets the hip/joint supplements 2x per day but there are times she looks like her hips are bothering her as she tries to lay down. No yelping of any kind but she takes it slow and easy to lay down.