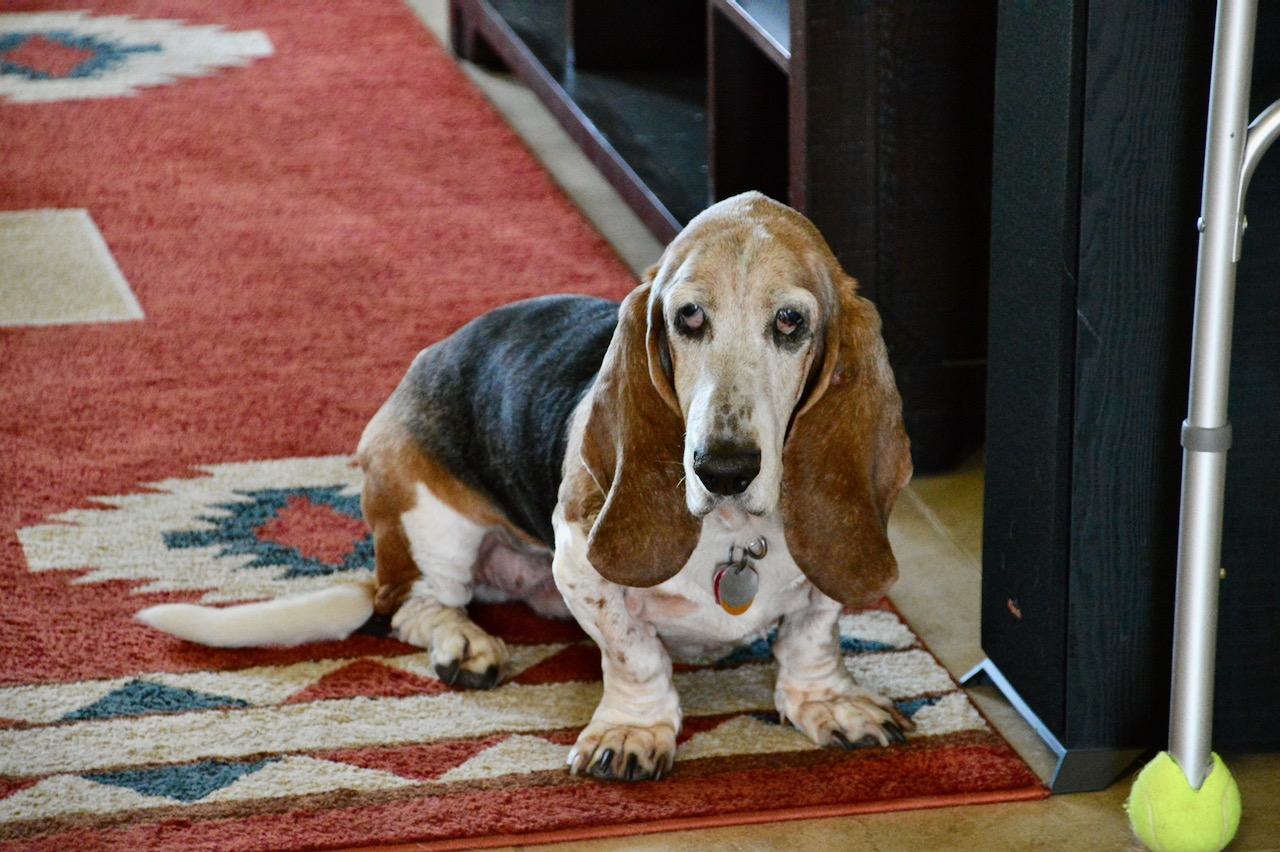 I spent most of Monday with the familiar feeling of a 'rock' being inside my hip about the area I would guess the real femur is trying to grow on or around the new hip. I am not sure how much is metal or how low it goes on the femur. Advil wasn't working and I did not want any more muscle relaxers since my lower back had improved. In late afternoon it hit me ... try an ice pack on the side of my hip like I have before .... it was like magic in about thirty minutes time. 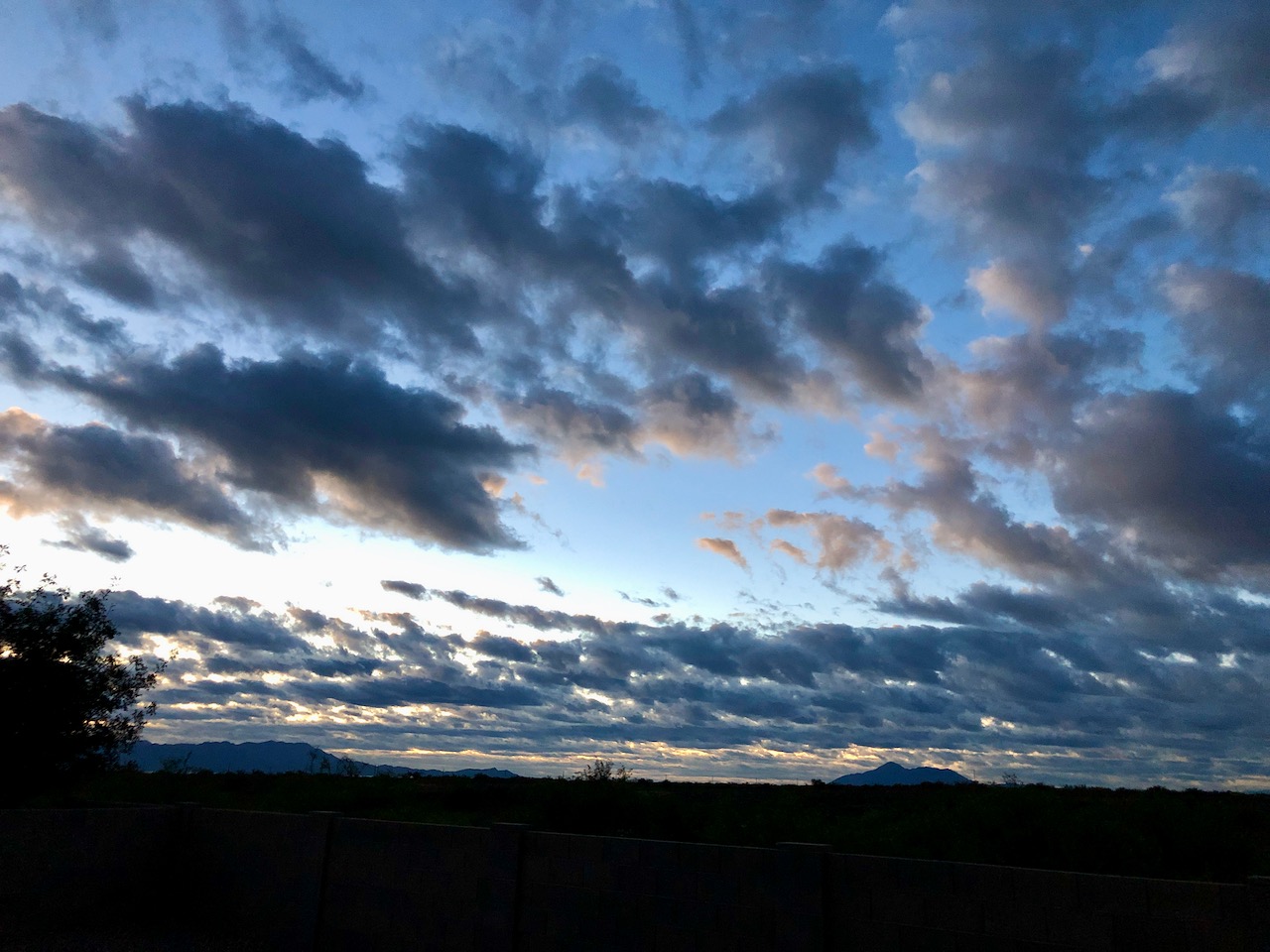 I also applied that ice pack while I lay in bed a few hours later and woke up with a hip with zero pain or soreness. I was almost shocked as the hounds and I walked down the hallway around 3:30am. Heidi has a new habit now that I really like, she stops right by the bed and does a full body shake to wake me up. So far that has worked 3 out of 3 times. We came back and slept till 6am and my hip was feeling really good. A little stiff at the start but really good. 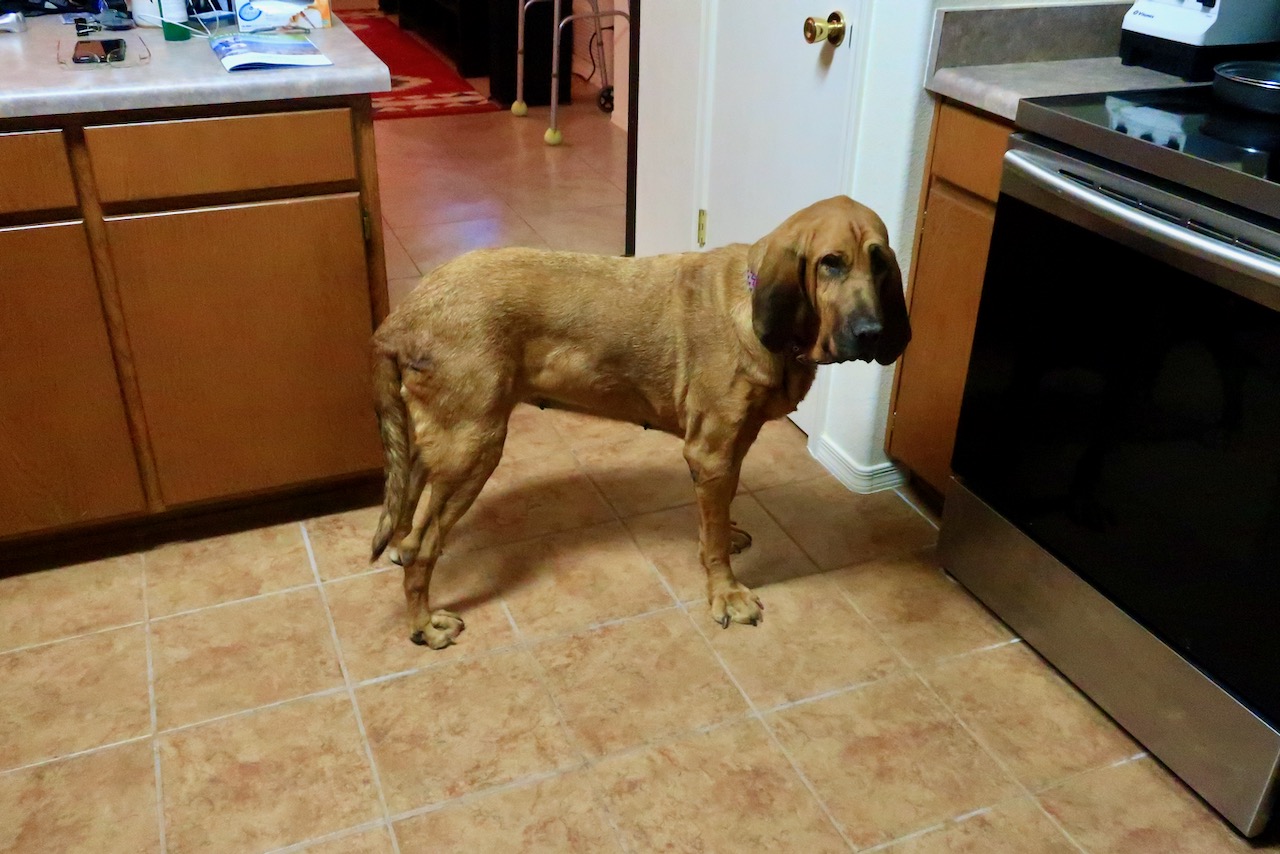 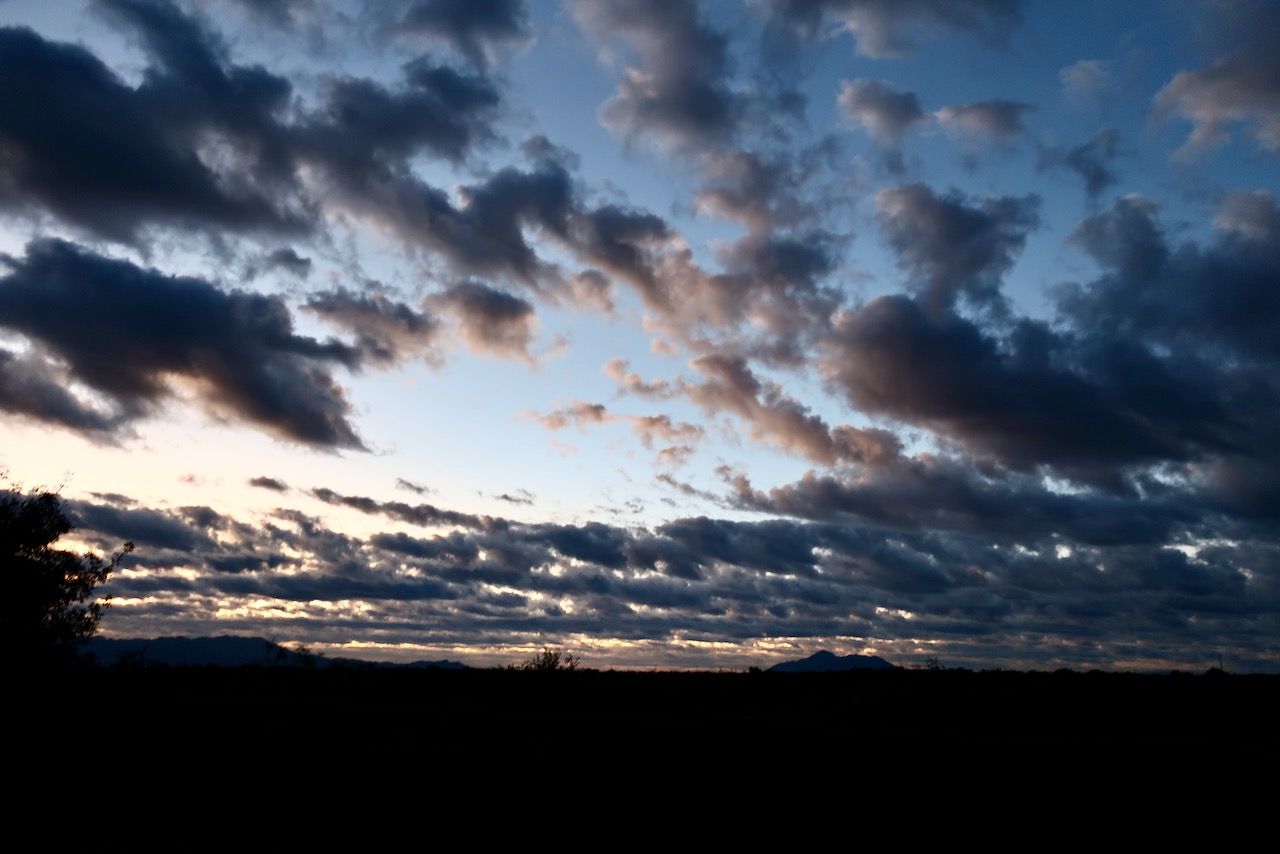 As you can see it was a sky show early this morning. I couldn't stop taking photos of the sky. Can you tell which camera I am taking these photos with? iPhone, Nikon D3200 or the Canon G7 X ?? 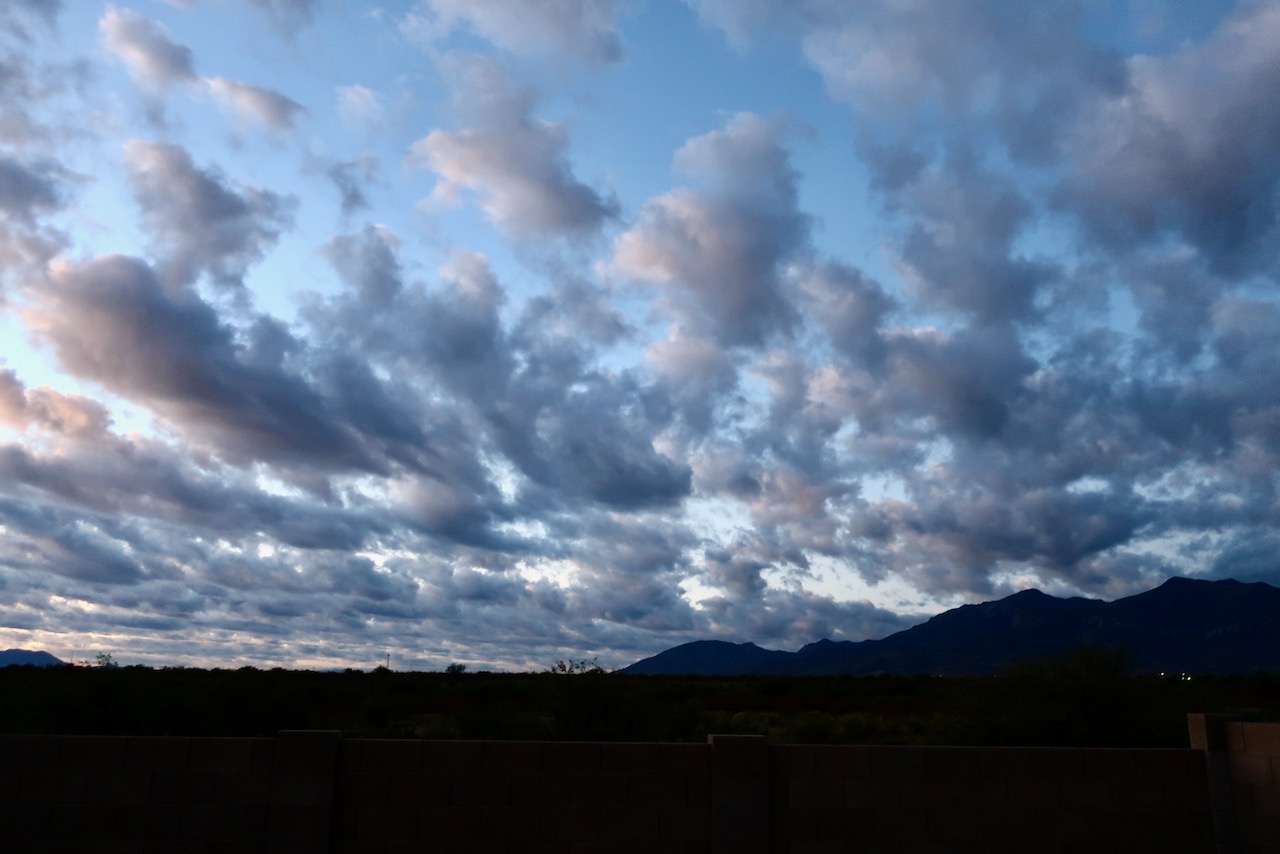 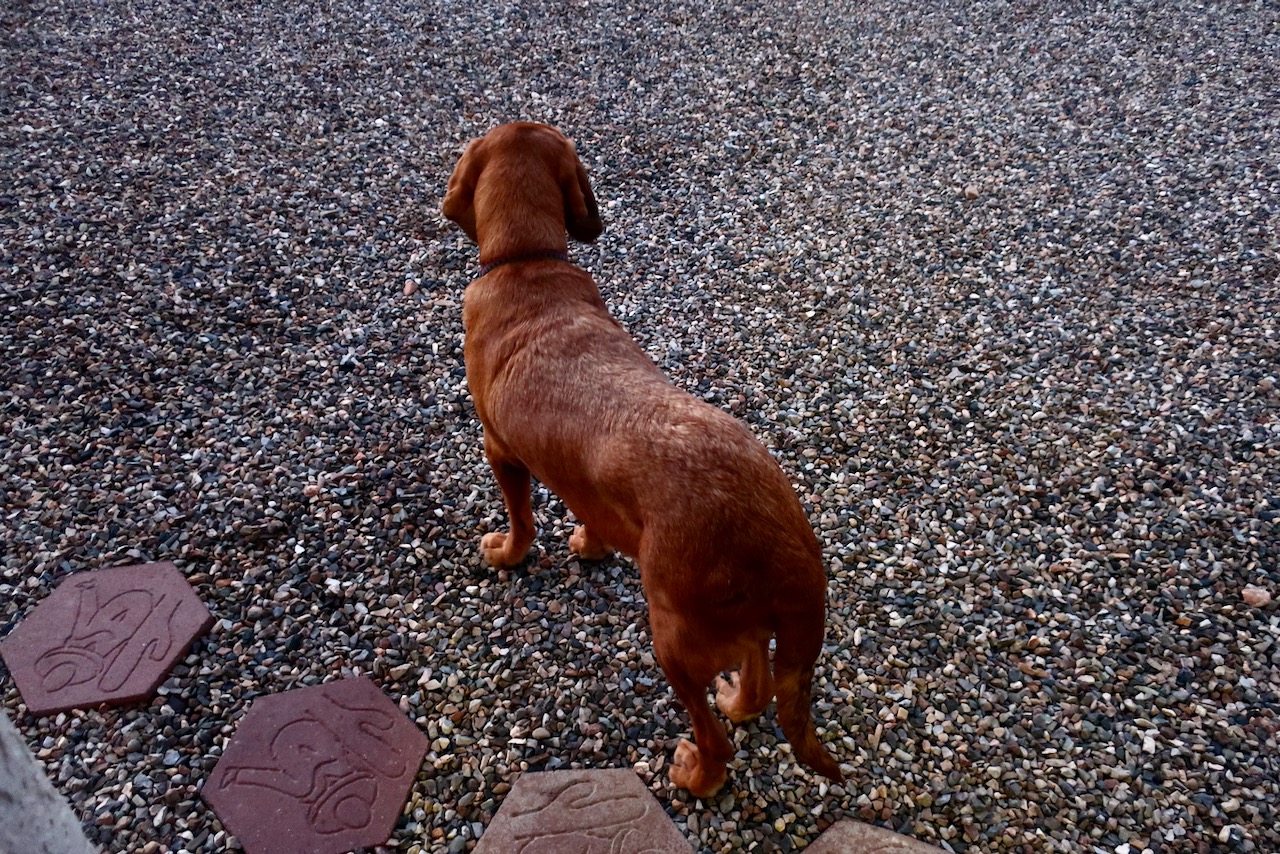 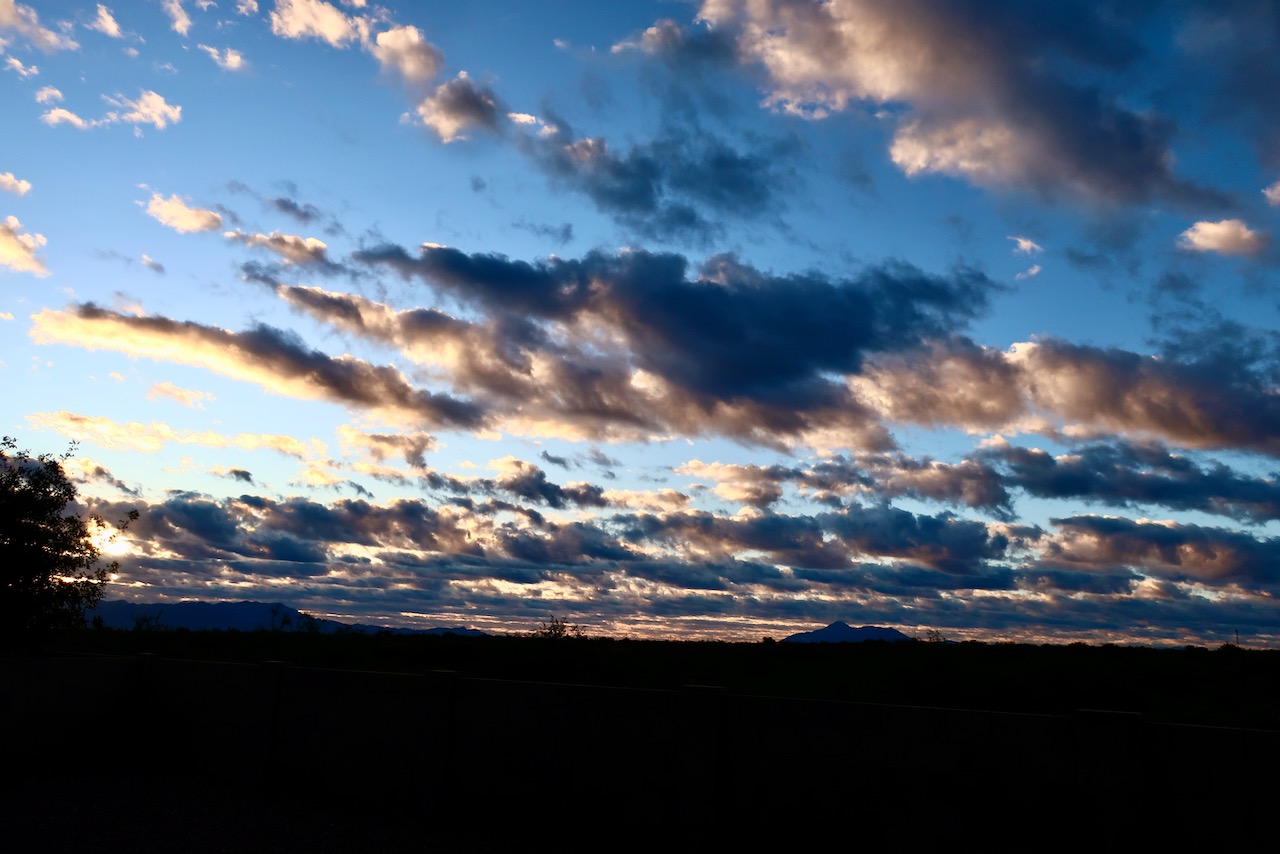 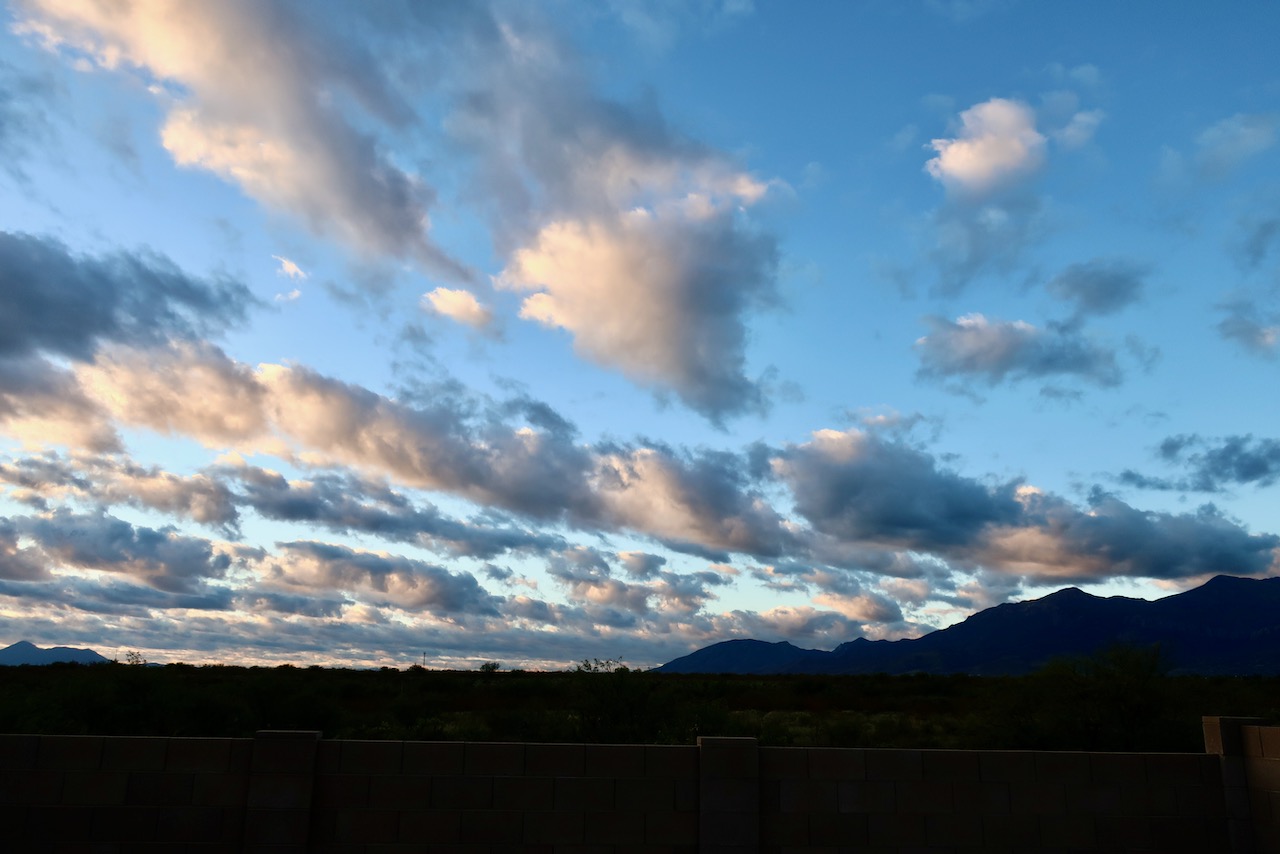 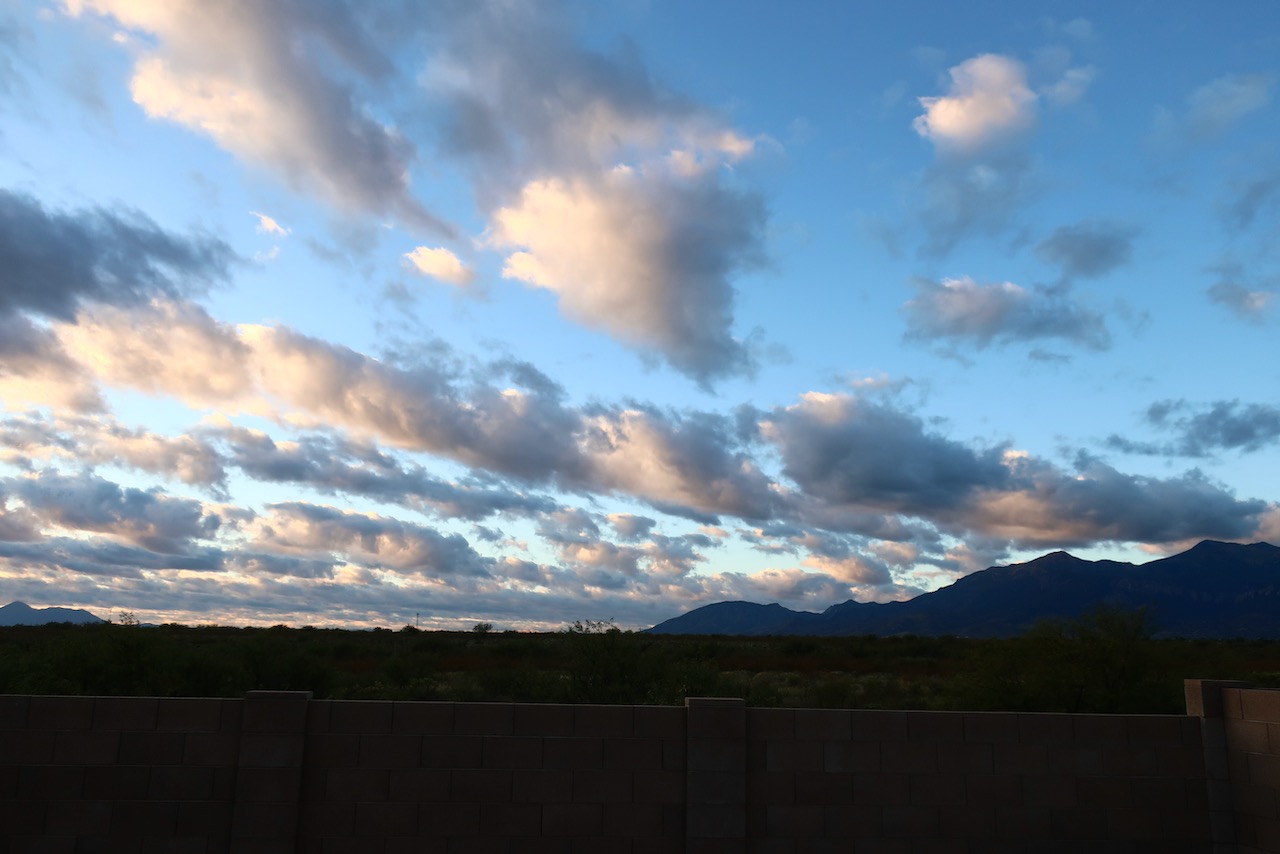 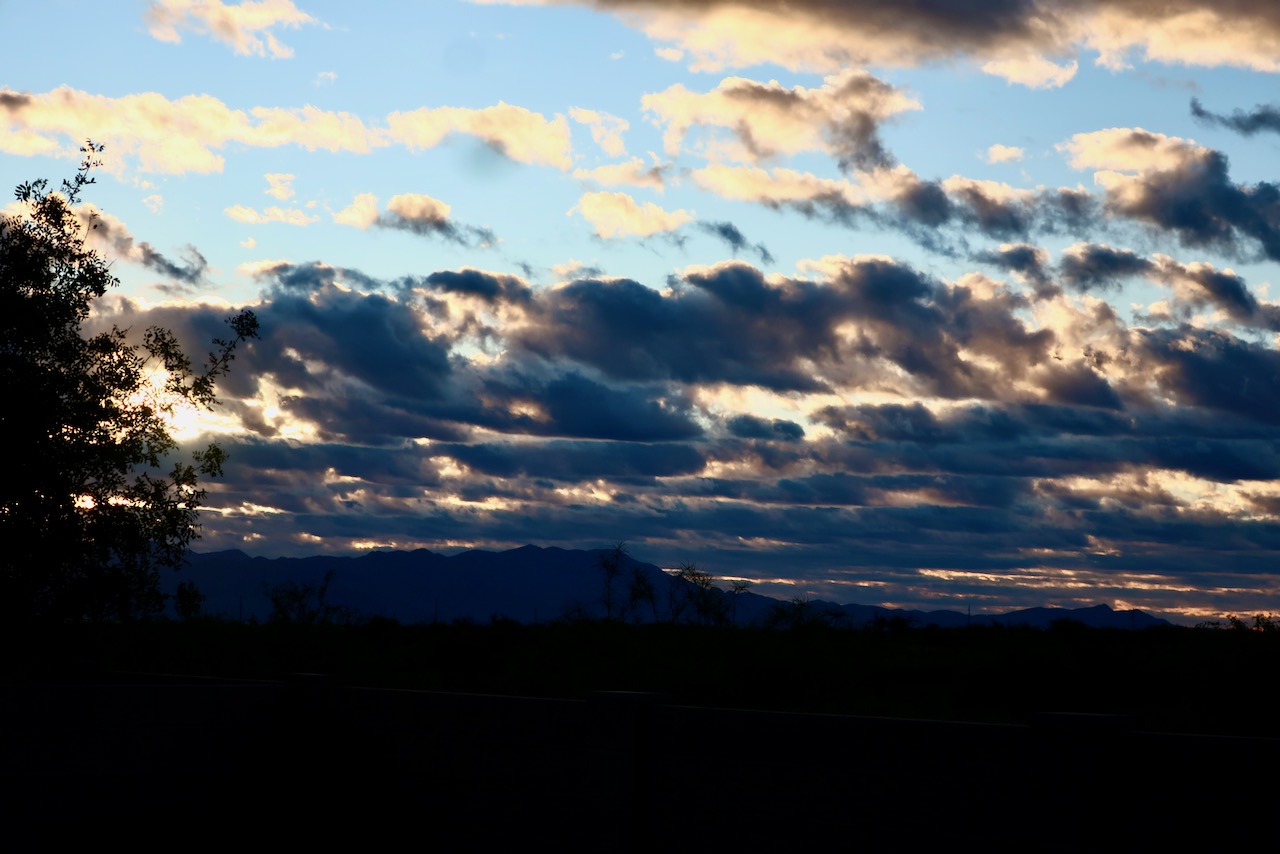 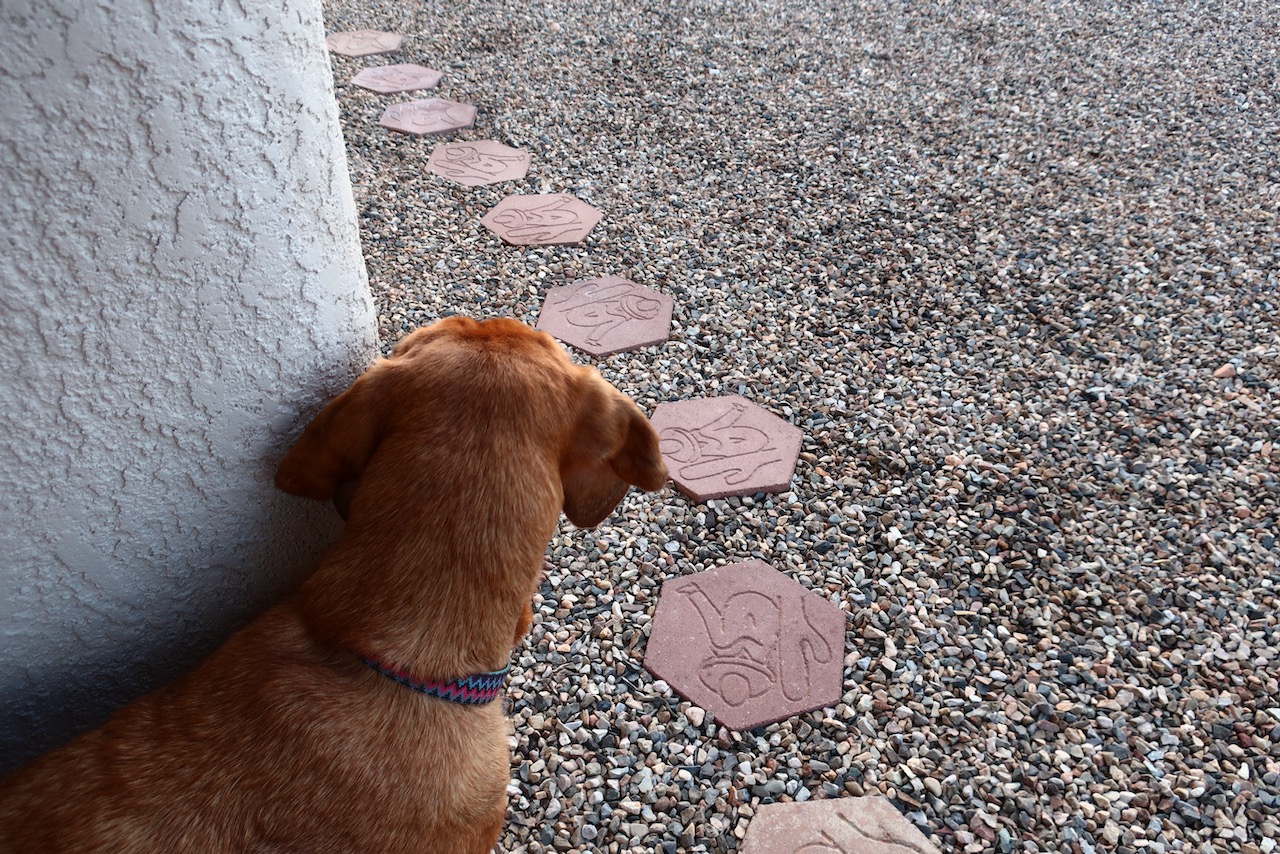 After breakfast Stella was still on the lookout for food. Just two nights ago she remembers the smell of two thick steaks being grilled next door. She is thinking there might be some scraps tossed over the fence for her. 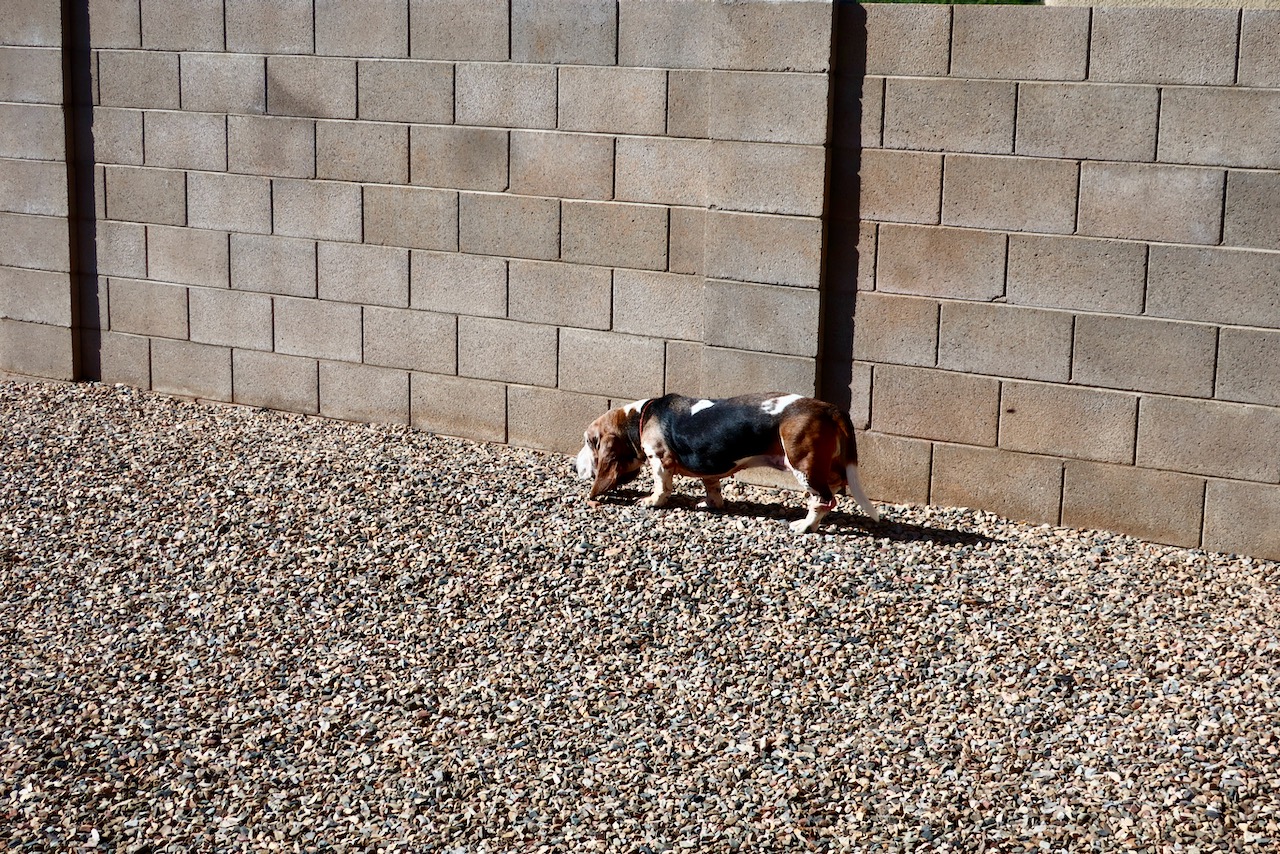 With the daytime temperature being much cooler, Heidi is spending more time outside exploring the yard. That does not mean the sun is cool, just the air temp. The sun felt hot enough to me that I thought it was in the 90's. 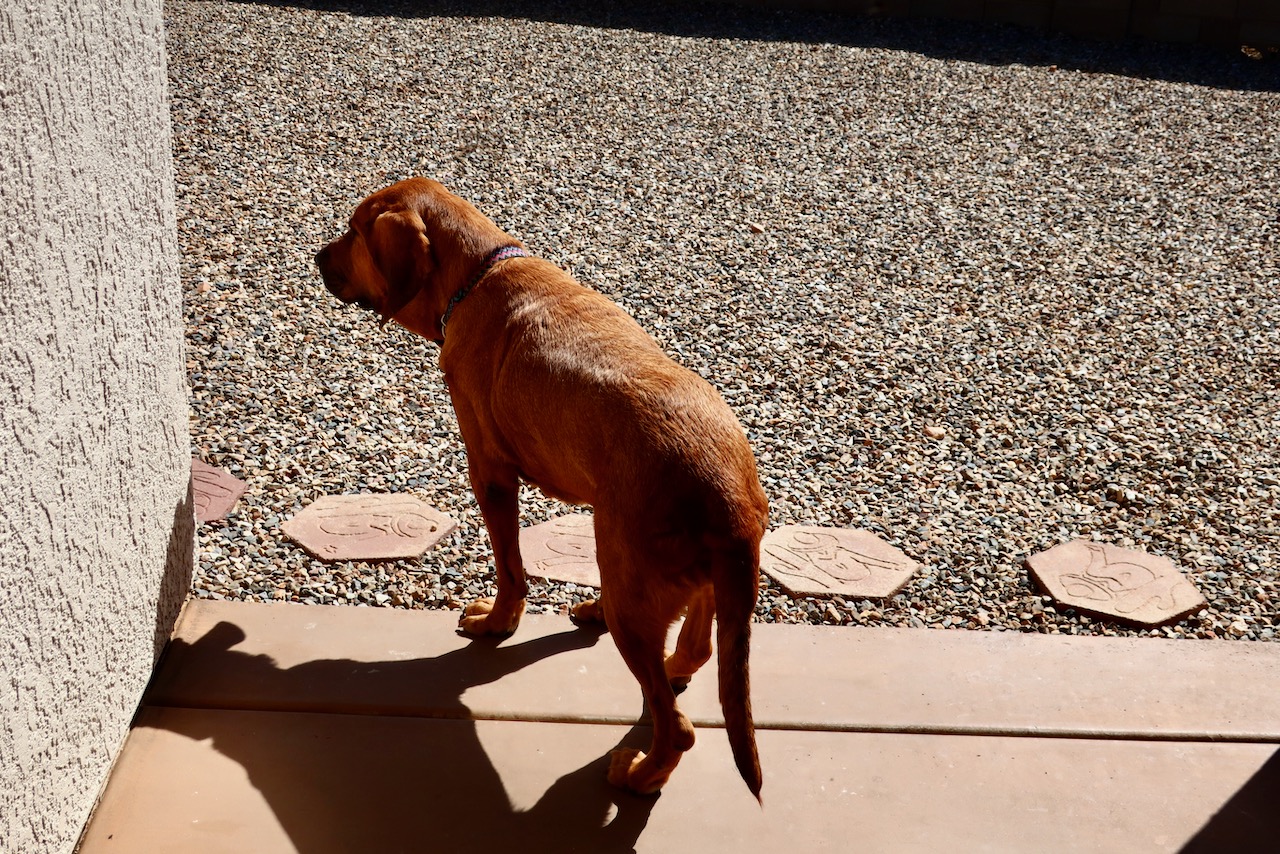 Stella jumped up out of her nap on the patio ... an unfamiliar sound. It sounded like a tractor was passing by pretty close to the fence. I missed it as it passed but I could tell looking over the fence they were mowing as much brush as they could. Too bad they didn't get right up next to my fence. 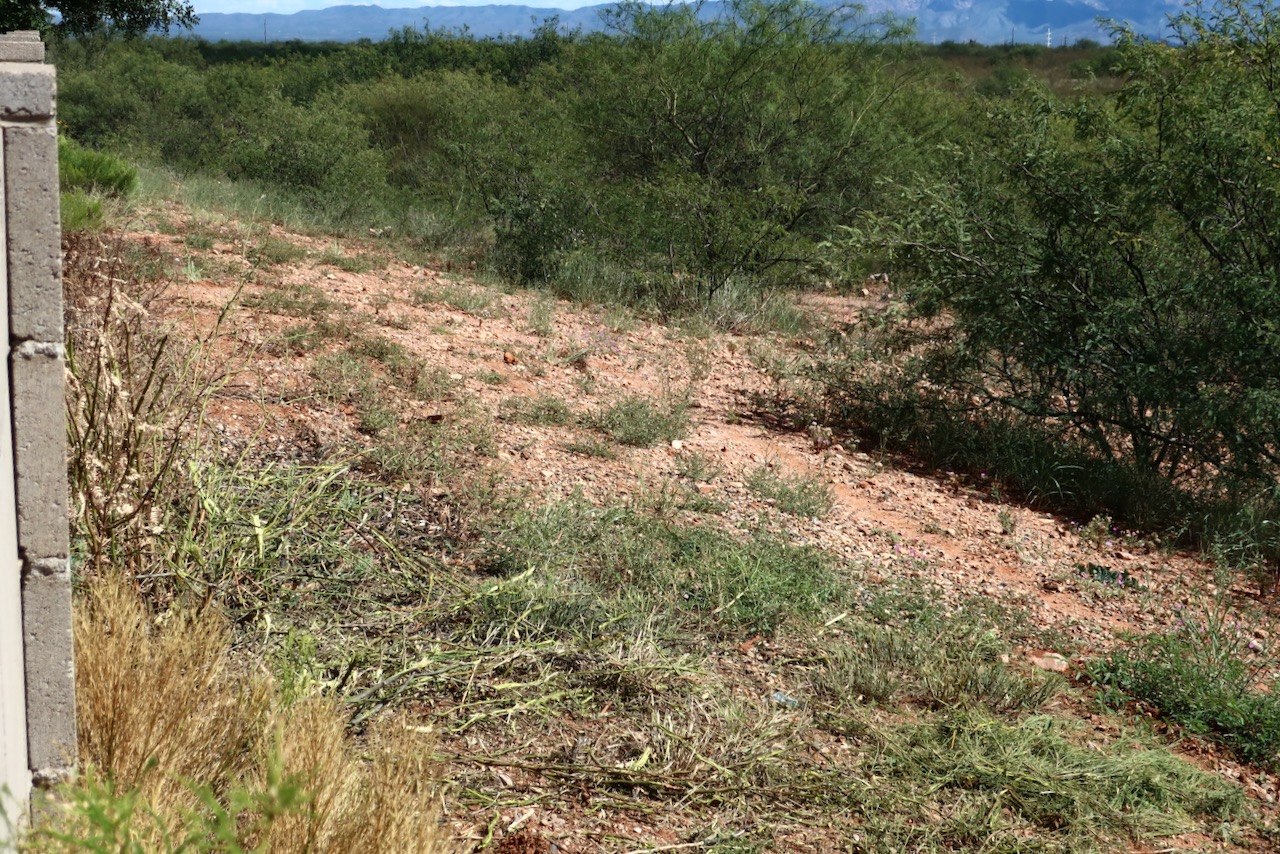 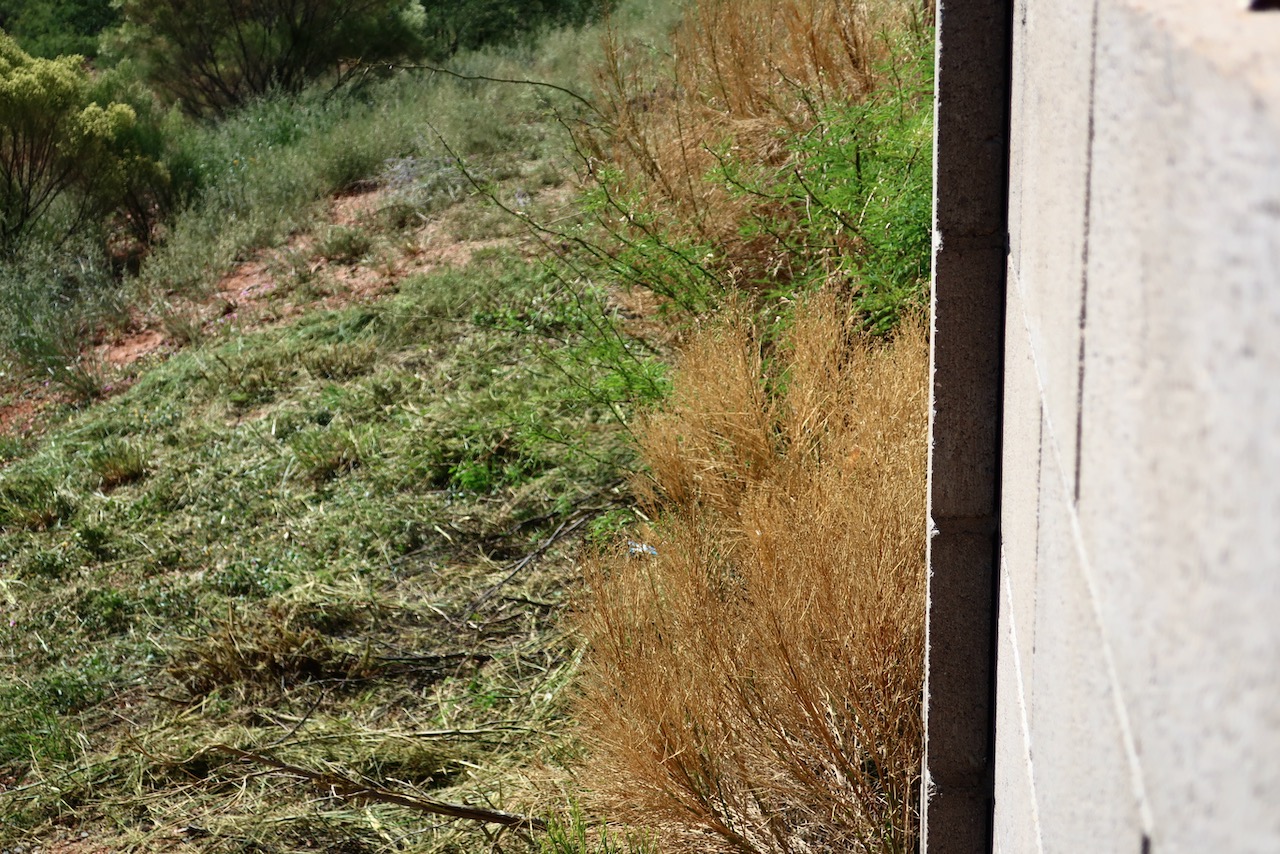 Once I am in better shape I will take my pruning shears with me and walk to the end of the block then curl around onto the path behind me where I can cut all of these down to ground level. All the dogs that bothered us walking this way the first week we moved here are no longer living in the neighborhood. 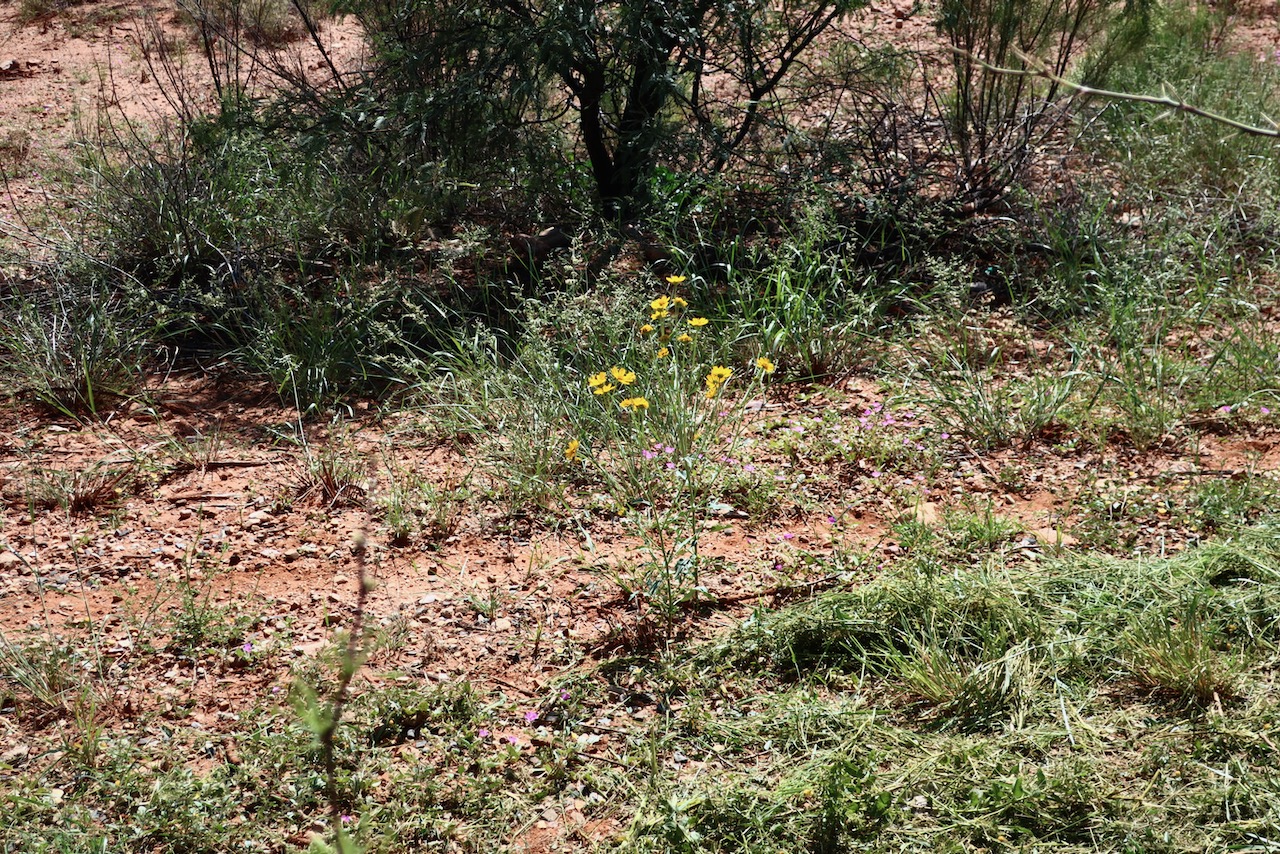 I had a feeling the brightest color of the vacant land in back was not going to last much longer. 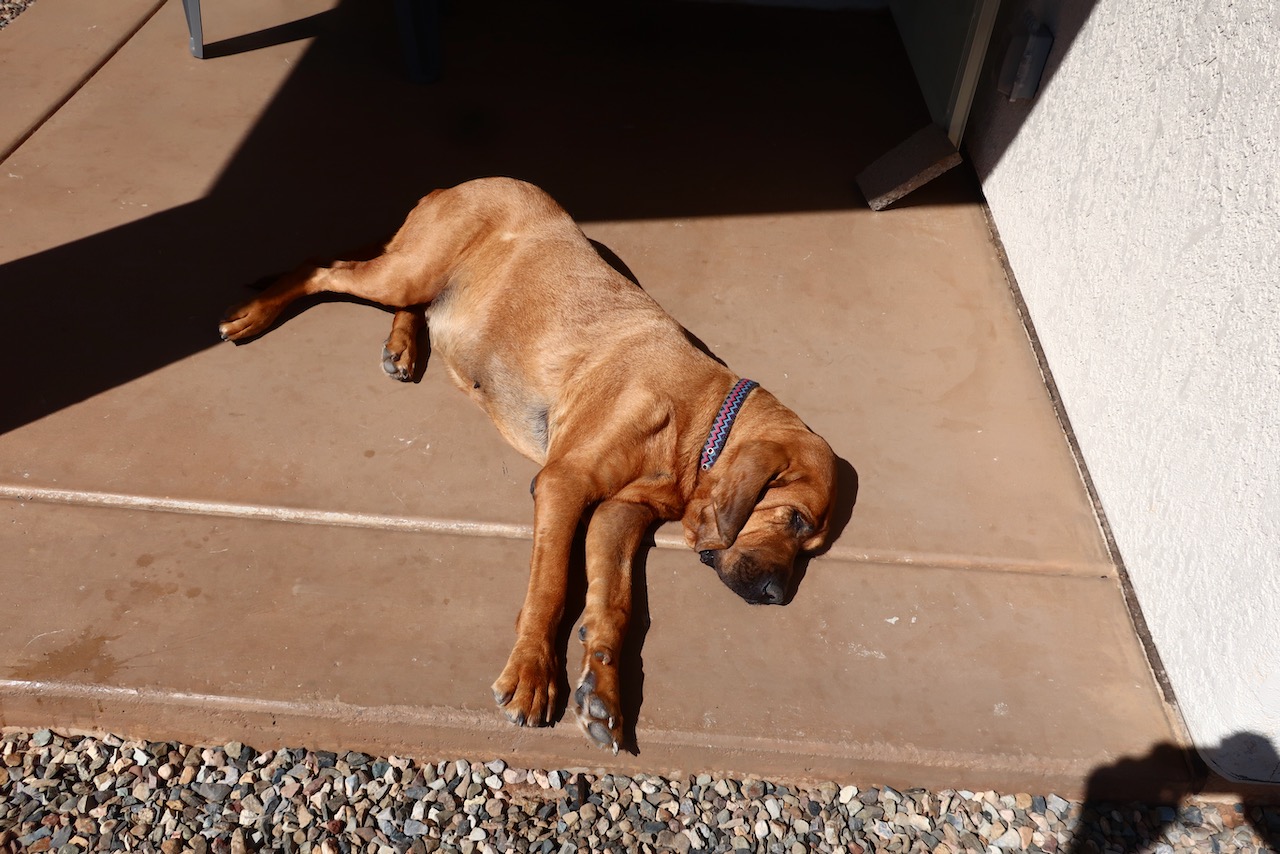 Once Stella figured out the noise was just a tractor just like back in Indiana she resumed her afternoon siesta. That coffee spill will be cleaned up once the doctor gives me his approval to bend more then 90° ... otherwise it will remain. I guess Stella doesn't like coffee that much. 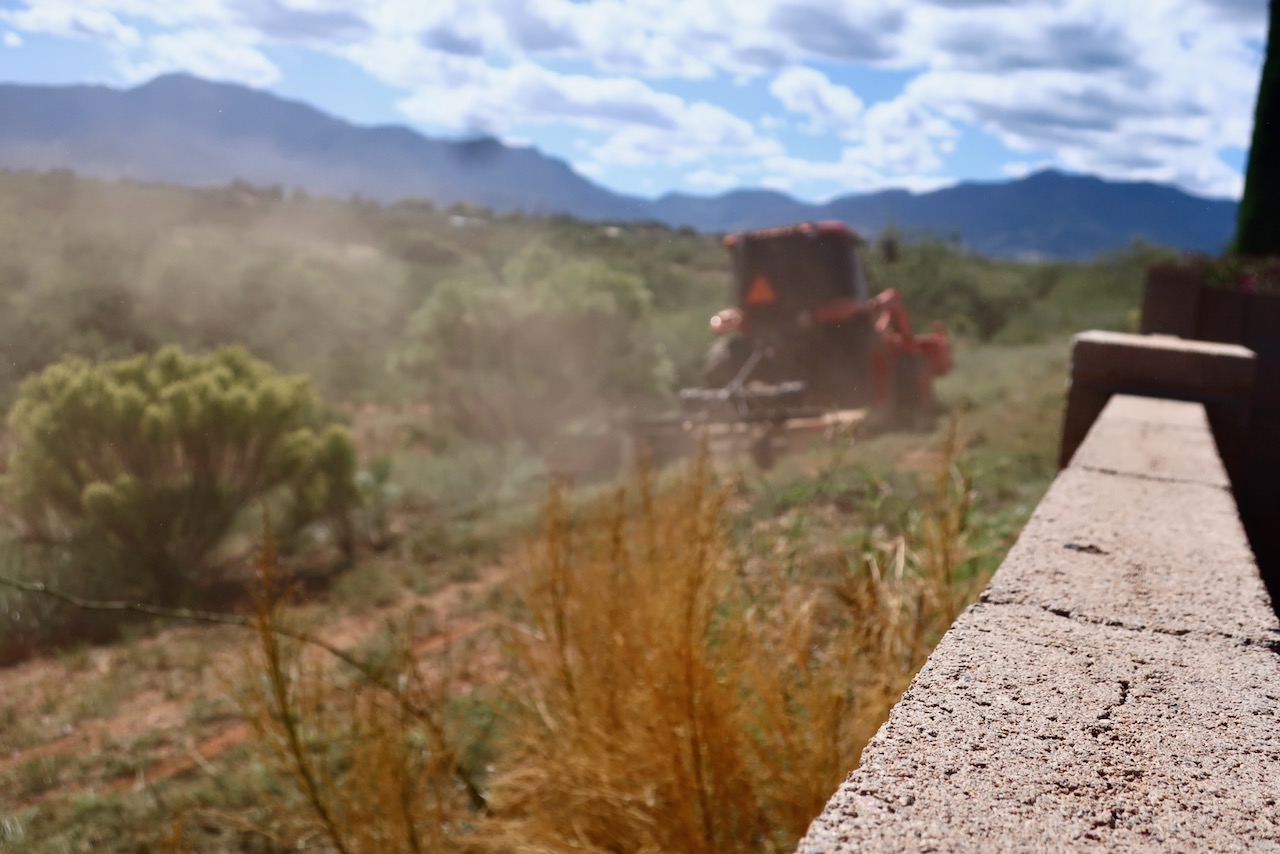 I was right, the second lap took out the yellow daisies. 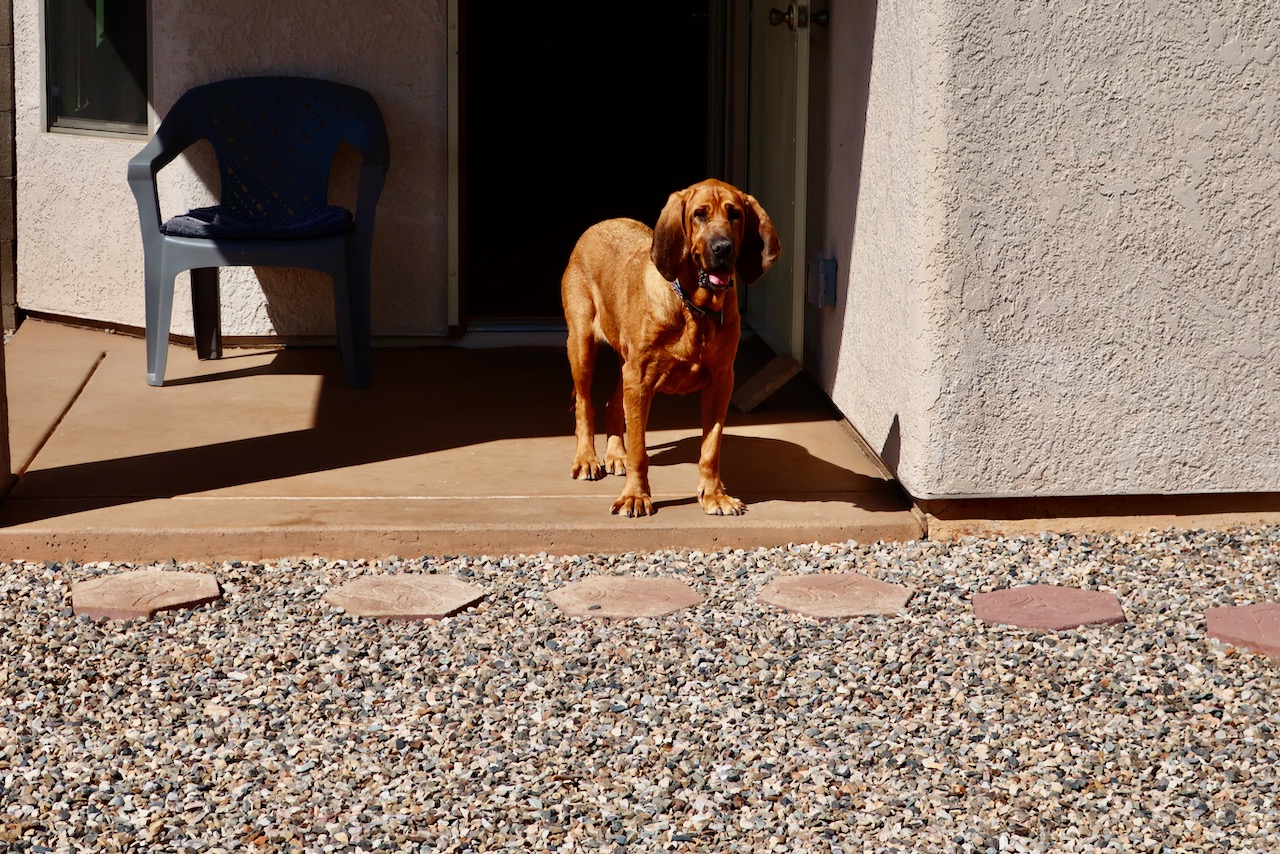 Once it gets too hot, which doesn't take that long ... Stella is ready to go back inside. 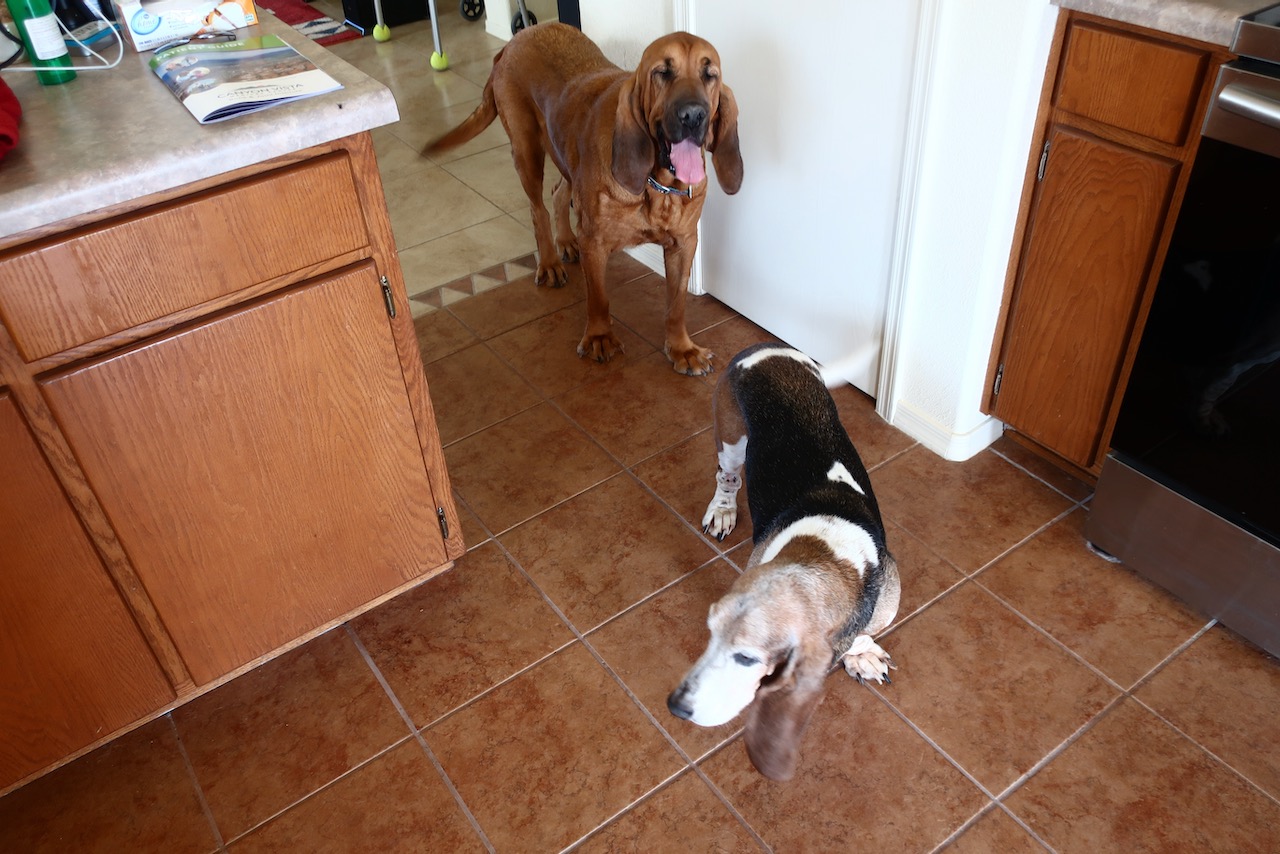 With Fry's Market delivering my grocery shopping online I had to bribe the hounds with dog treats to get them outside on the patio while they moved the groceries to their car to my kitchen counter. I ordered 53 items and they didn't make any mistakes.  Well worth the fee of $9.95 plus a tip ... especially when you can't walk.  LOL The hounds were left outside for less than five minutes. 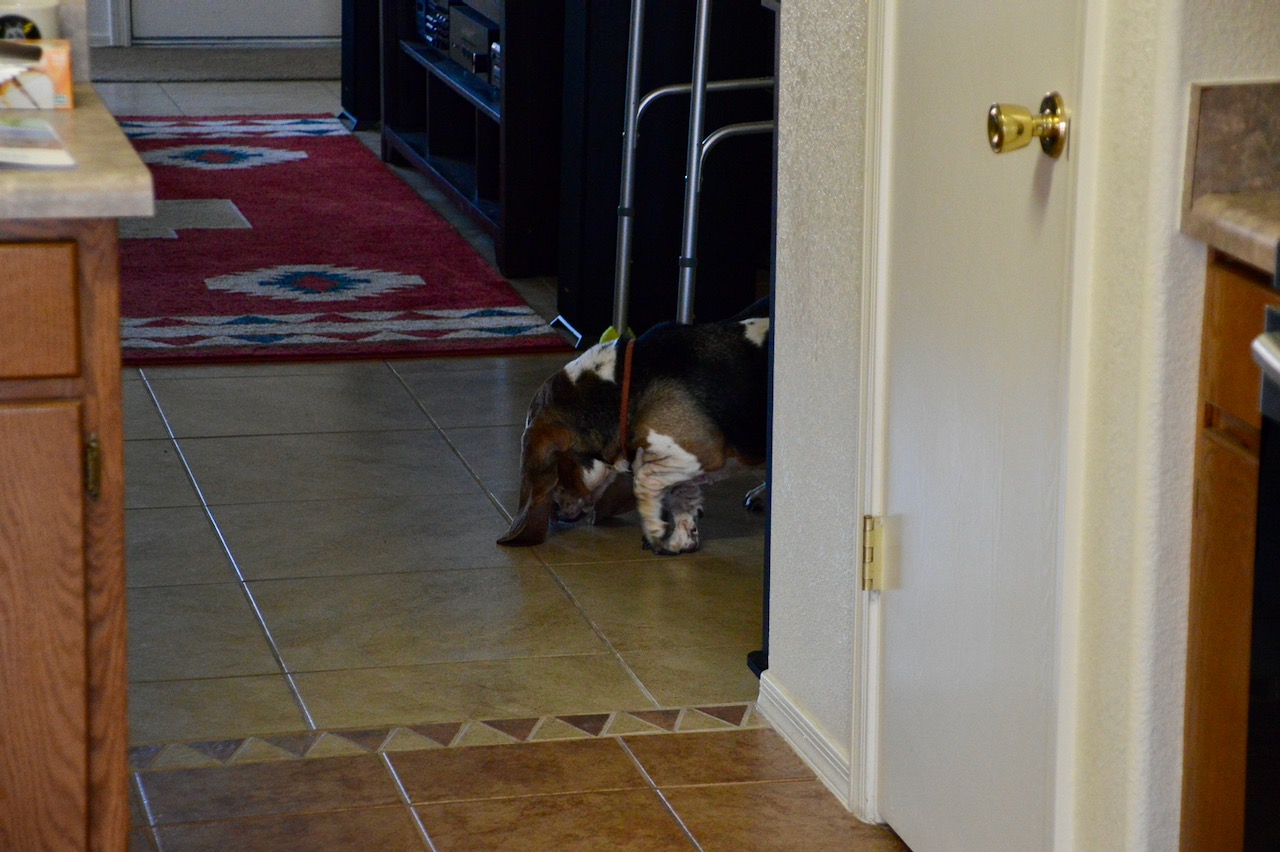 Well the answer to the camera question ... including the photo right above of Heidi ... all but one of these photos were taken with the Canon G9 X. Some of them had the dark spec from inside the camera and others were perfect with nothing to edit. I guess based on the cost of the camera and owning it for only 10 months I might as well use it and edit the black spot off of the photo as needed.

I did a 10 minute walk today around the backyard. It was slower than I normally go but I did not feel any kind of pain in my hip or groin. I do know that sitting in a chair for longer than 30 minutes put that 'rock' feeling right back inside my hip. Even if I just stand up to watch the game or take a break from the computer, that also works.

I feel much better than yesterday in the hip ... thus my attitude has changed for the better. I'm back to feeling positive about this healing process. Seven days until my next follow-up appointment with the surgeon.

Cabin fever is overbearing right now here in the Wild West.
at October 15, 2019