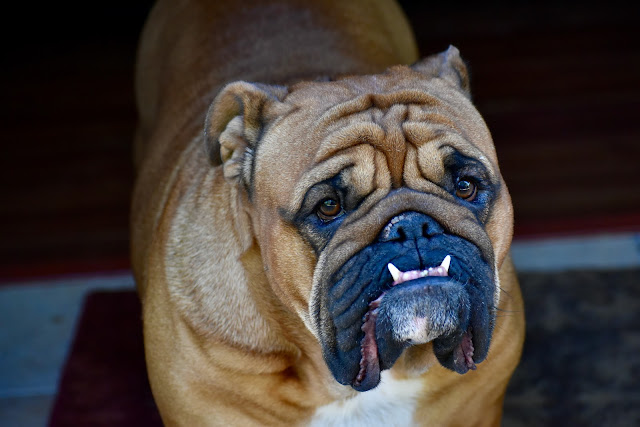 It doesn't matter if I like hot weather. Fall temps are here, it's cold in the mornings and I have already broken down in early October turned he heater on just long enough to heat the house a little to take the edge off.  It will take all day outside to get to the predicted high of 78°.
The hounds and dog know fall is here. They also know that winter is on the way because they have changed their routine a little the past week. Instead of running full sprints from one end of the yard to the other chasing each other at 7am, Watson and Henry come inside right after breakfast and head to the bedroom for an early morning nap. Even Walter jumped up on the bed this morning to join them. Yes, winter is on the way. 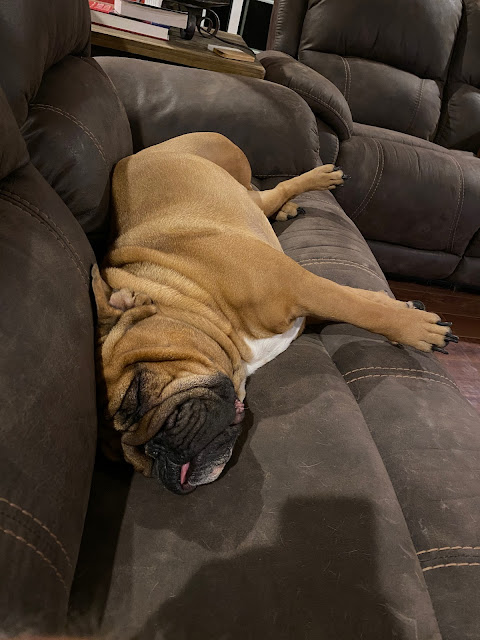 That sudden burst of motivation I had a few weeks ago is barely hanging on the edge before it falls off the cliff. I fixed and painted the porch, painted the living room and computer room, deep cleaned throughout the house and then ... I felt like Walter in this photo. Yet it is one of the busiest times of the year for sports fans with college and pro football games on tv almost every night and now baseball has started their playoffs. Can you believe they will be playing the World Series in November this year? 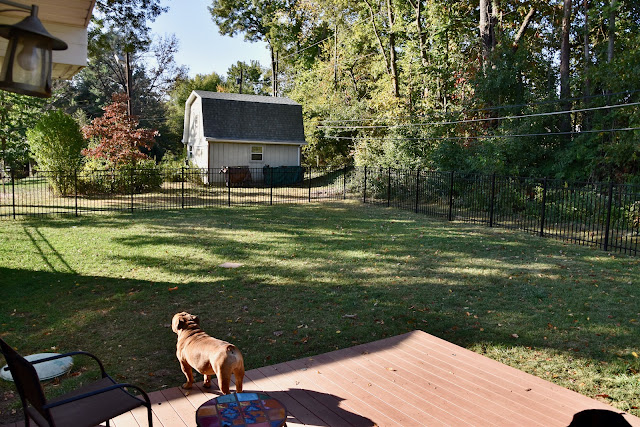 We stepped outside this morning and Walter checked out the 48° after 8am. I had no plans of blogging this morning but was able to capture a few photos with my Nikon 70-300mm lens. It's really going to be a nice day today even with cooler temps most of the day. The leaves have not changed color much this year. I am starting to see some color change in the large trees across the street but nothing like the normal fall explosion of color.
Without a tree in the front yard, I have no leaves in the front yard. I may have mowed the front yard for the last time on Friday. In the back I will mow only to mulch the leaves. I have the blade set higher than last year so hopefully I will have a yard next spring with thick grass. Two different guys, one from an organic yard company and the other from TruGreen the neighbors use, both told me my backyard has/had a fungus. 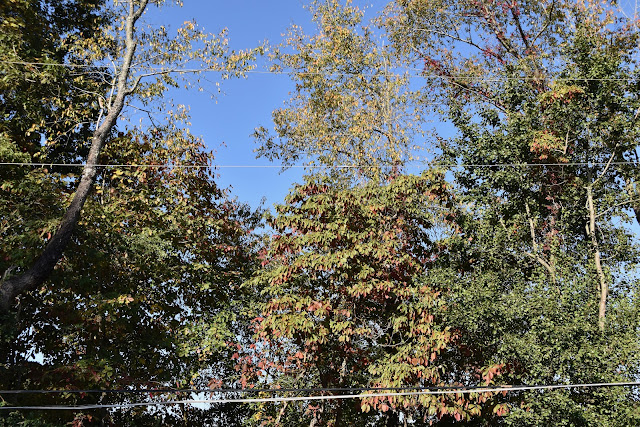 It would be from the flooding I had last winter and early spring. It could be that I cut my grass too high in the spring when it rained a lot. They did not have any treatment for the yellow spots from dog urine but I am now giving the hounds and the dog filtered water to see if that works. The dog food supplements did not work. I've read in more than one landscaping article I should keep the grass at 2.5" not at 3".

I just had the weirdest thing happen to me. While I was typing I could feel the tip of my middle finger on my left hand becoming numb. When I held my hand up to look at it, only that finger tip was turning purple. I held it under warm, then hot water for a few minutes. The feeling in the finger came back as did the normal color. I guess I will have to do an internet search on that after this post and see what is up. 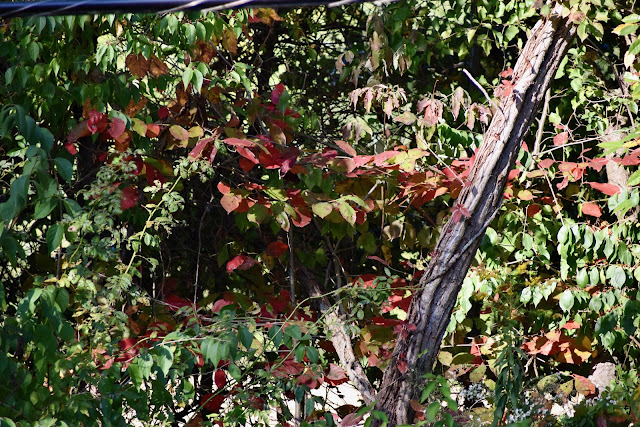 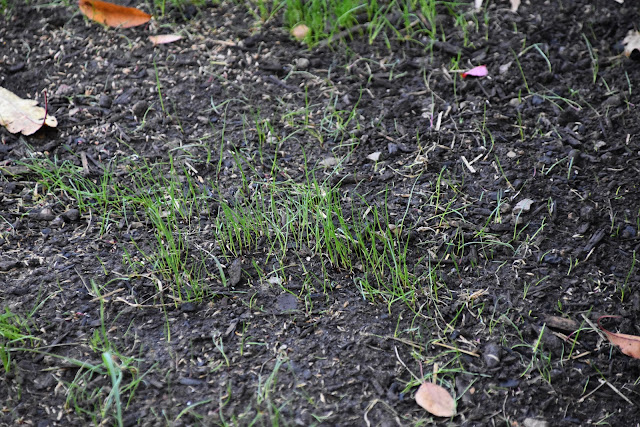 I almost took my temporary fence down over the weekend. I have never liked the looks of it but it was the only way to keep the hounds off the new grass seed I had planted and to prevent Watson from digging next to the gutter downspout. Even with overnight temps in the 30s the new seed continues to grow and I can see a difference every day. 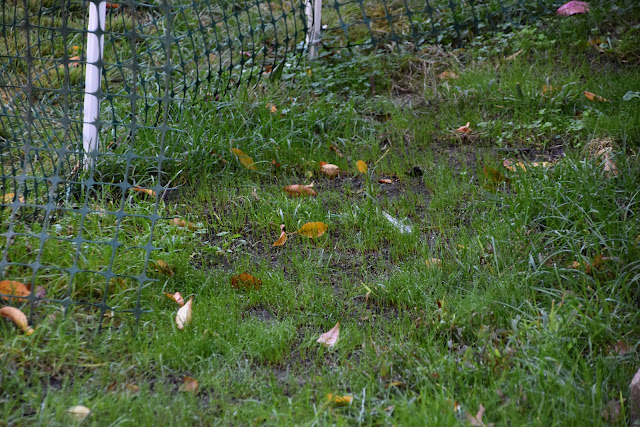 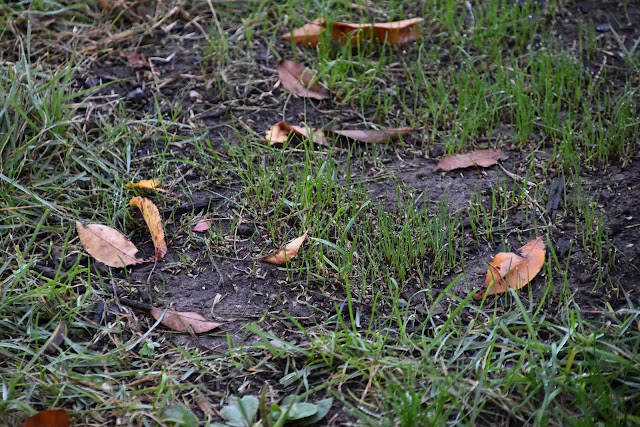 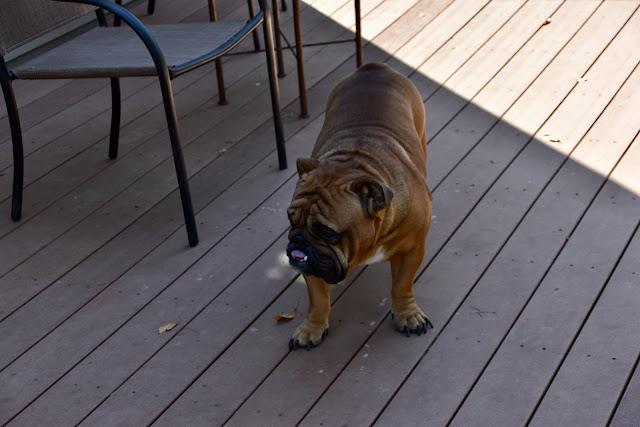 Walter still likes waking us all up at 6:30am or earlier with his loud weird sounds that only an english bulldog can make. The hounds like to sleep a little later now that they know winter is on the way. The difference is that Walter now goes out first thing in the morning with the hounds instead of sitting in the computer room waiting on his breakfast to be served. He will then sprint from the far corner of the yard, through the opened patio door and straight to the computer room without slowing down, to eat his breakfast. 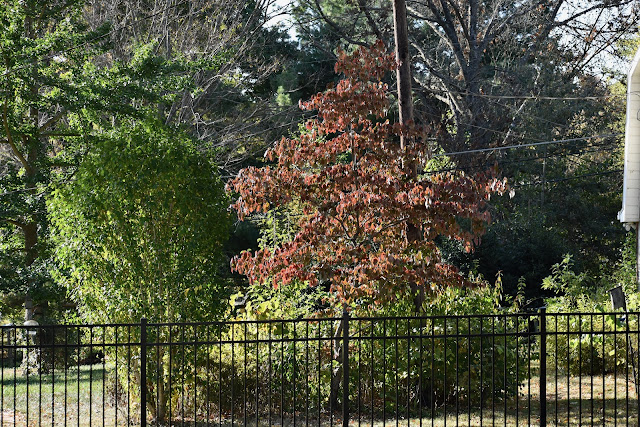 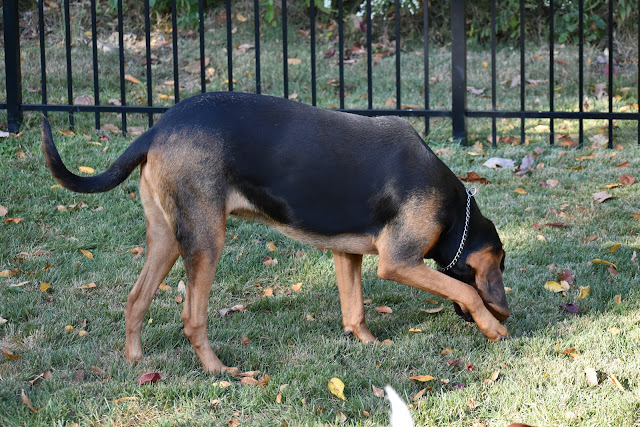 I would think most of the early morning scents that Watson and Henry track are squirrels that are inside the fence unless the hounds are outside. They have a path worn up next to the fence, from waking the fence line very morning once they are outside for the first time. Watson tried tearing down the closed patio door yesterday when he saw a squirrel in the far corner of his yard. I barely got the door open before he charged out and chased the squirrel out to the berm. They say dogs don't see well but could he smell the scent of the squirrel while inside the house? 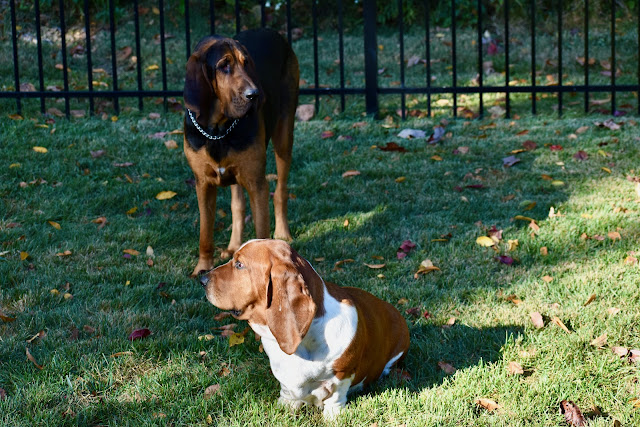 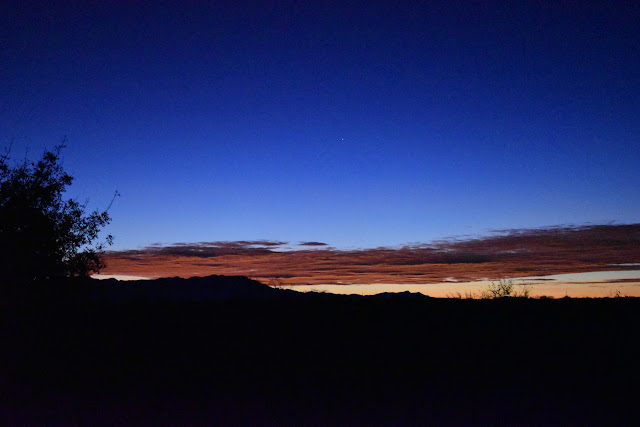 Flashback time .... sunrise over the Mule mountains down by Bisbee AZ taken from my patio out west ... I moved the camera from left to right catching the Mule mountains, St Joe in Mexico and the Huachuca's to the right of me. 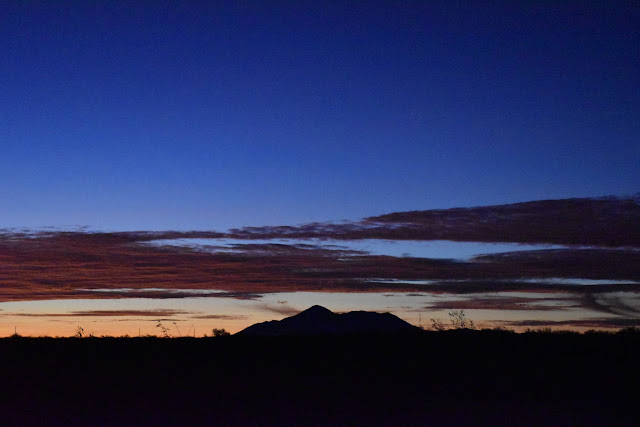 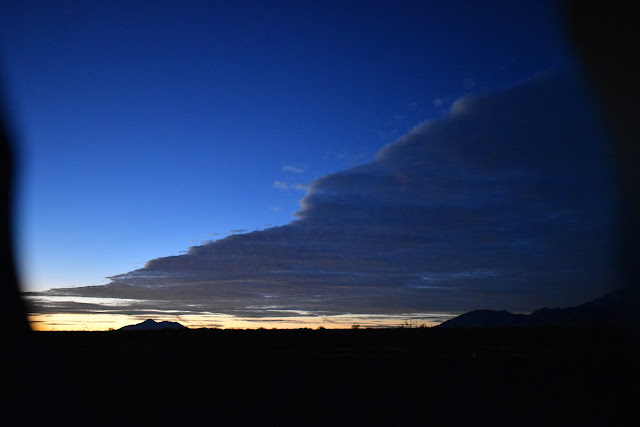 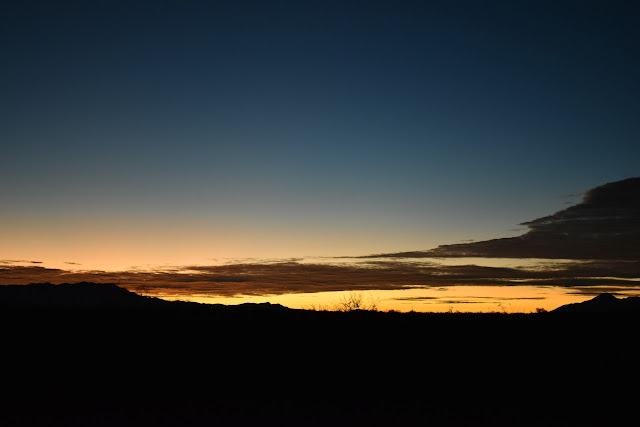 As I have stated many times before on this blog, I am not a fan of cold weather. I do like the fall season but it seems like temps in the 50s anymore is like freezing and I can never wear enough clothes to stay warm. People didn't realize when I lived in Sierra Vista, that was around 4,600' elevation. We had mornings in the 30s and even yesterday, my high temps were like theirs. Not a lot of difference this time of year and during the winter. Yet it was about 15° warmer in Sierra Vista once the sunshine was out.

The hounds and the dog are "homebodies". They like staying home most of the time. Henry does love riding in the car though and whenever he sees me with a leash in hand he gets too excited for his walk or a trip in the FJ. Walter has no, zero interest in either activity. Watson would like to walk and doesn't mind jumping in the back of the FJ but I don't see any long trips this winter with two hounds and a dog, for warmer temps. I have thought about it though since I have been cold since our last post.

With another typical retirement day, I will see what it leads to. I have a couple of things I could do on the project list but I am not really in the mood to start either one. The undercarriage POR-15 treatment on the FJ is going to be a major job, time consuming, but one I have to do before winter. The other is finishing the living room window repair and painting after the wood is repaired.

Fall is trying to arrive here in "the tropics" of southern Indiana but I want summer to come back.