That Is One Nice Rig - A Deposit Was Left

When I said I was going to look at this rig between forecasted severe thunderstorms, that proved to be more than I bargained for. When I left my house it was blue skies and sunny after raining for 3 straight hours. By the time I arrived 50 miles away the skies were black, not gray, and was raining so hard that cars were pulling off the road because we could not see. I thought to myself, what a great day to look at a RV.....at least if it leaks I will no. When not used though it is kept under a portable garage so that made a difference.

Well I had brought my bright small LED flashlight that can penetrate walls if it needs to, it's that bright. I brought my small camera thinking it would take better photos than my iPhone (wrong) and my checkbook which I never use just in case I needed to leave a deposit. I also brought all the knowledge I had read on everybody's blog the past few years, plus the new information on 'vintage' RVs from the forums last night, that I had added to the "notes" of my iPhone so I would not forget anything.

By the time I pulled into the drive, the rain had decrease to a nice solid downpour but I could see. I did a walk around, opened the engine bay outside, looked and felt the tires, moved my fingers over the aluminum siding ... it was as nice as the photos. Maybe even nicer. The rig barely fit in the garage so there was no chance of lowering the patio awning but the rails looked new. I put my finger up on the tire thread ... they felt new. I asked, he told me he just put on a set of tires. He then said I like to keep all of my vehicles up to date with maintenance and I did that with his RV. I glanced around and saw his pick up truck, 3 cars for kids and wife, then in "his" garage a mint 67 Camero along with his new weekend toy, the Harley. Everything around his house was immaculate.

So we have new tires, he said he had replaced all the belts but if it were him he would have everything checked out before a trip west. I agreed. By this time it was back to raining to hard for me to climb the back ladder to look at the roof. We moved inside to get out of the pouring rain. As soon as I stepped inside, I felt this was the one. I was immediately thrilled that the seats, furniture was a tan based color and not the 80's pink, purple or raspberry colors that seemed to be popular back then. All the oak cabinets were flush when closed, solid oak and looked brand new. ALL the furniture was nice, stain free, comfortable including the drivers seat.

Already I noticed it had a lot more interior room than my Coachmen Class C I had sitting here over the winter. This has no slides but it still looked roomy. The dining table had TWO legs holding it up, with 2 brackets in the floor. The dining table, kitchen counter and bedroom night stand look purple in the photos but they were more of a brown color with maybe a tint towards that color. All the carpets were between a tan/white but on the photo it shows the carpet over the engine bay being a little orange??? Not so...it was all tan color and in great shape for carpet. He had laid a darker runner over the isle that looked very clean when I looked closer. He had just de-winterized it so the ice machine was punching out pink ice cubes. Tons of drawers and closet space, more than I need or will use.

I was very impressed. I took my LED flashlight and looked inside every overhead storage, along the ceiling ... it did not sag and everything inside the cabinets and headliner looked brand spanking new. I'm serious ... I was shocked to say the least. This model has two single beds in back. That could work both ways...one for me and one for the hounds, although the bloodhound prefers the floor and no blankets of any kind. Or I might take out one bed and install a desk from Ikea to put my iMac and 2nd 27" monitor along with the printer/scanner.

The blinds were in good shape, the curtains will come out because they are not my style. The carpets are nice enough to keep or I can rip them out and install some kind of wood flooring or vinyl.

I turned the key and the engine fired right up and purred like a kitten. The seller lifted off the section between the seats to expose the engine and it sounded great. He said I would love the way it drove. He also said he would not take a final payment until I test drove it and we both knew the weather this week will play a factor on when I can pick it up. It has to be backed out into his yard you saw on the photos yesterday for him to turn onto the long driveway to a country road.

Some history of the rig. As he grew up his family always traveled by motorhome all over the country. His dad bought this 1987 Holiday Rambler brand new. Then 8 years ago the seller bought it from his dad and used it during the summers taking his young daughters and her friends camping. They would tow their pontoon boat and usually camp in state parks, even at 33' long. With his daughters now in college, the seller and his wife turned from RVing on weekends to riding their new motorcycle...thus the reason for selling. It was no longer being used.

I thought he told me the tags were current and it was used but I may have confused him with a different rig because tonight he told me it had been sitting for 3 years with very little use. It has 67,616 miles and no history of any repair work done. The only work performed was routine maintenance inside and out. It is wired for satellite tv, he had a tripod and dish that would come with it if I wanted it.

Some of the features - double sink, full size fridge, ice maker, great water pressure, great condition inside and enough storage outside even with smaller storage bays. More than I had on the Class C. I did not see any signs of leaks anywhere, under the kitchen and bathroom sinks, under the beds, the ceiling and inside the cabinets. Both A/Cs worked, heater etc.

I knew the answer before I asked but I assumed he had a lot of calls on it. He said he was getting calls 15 minutes after he listed it on Craig's List but with his work schedule and their work schedule, most people could not stop by to see it until the weekend. I told him I had no doubt that I wanted this rig and I would leave him a deposit. We both agreed that the weather would dictate when I could pick up the rig, I didn't want to tear his yard up and with the amount of rain we have been getting plus a forecast of 3 more days of rain, I didn't want this rig stuck in his backyard.

We both agreed that a final payment would not be made until I took it for a test drive. He lives 4 miles out in the country on the edge of a State Park and a US highway...so once I get it down the narrow country roads to the highway, it should be a good test drive. He did offer to deliver it to me and do the test drive at my house but the problem is ... I have to find somewhere besides my house to park it. The Class C barely made it up here around my house while keeping it on the top of the bank. It is not possible this rig will make it anywhere near my house.

So remember when viewing this bad photos ... the purple tables and counter tops are more of a brown color. ALL of the carpet around the engine bay is tan, not orange. The furniture color in the photos are accurate. 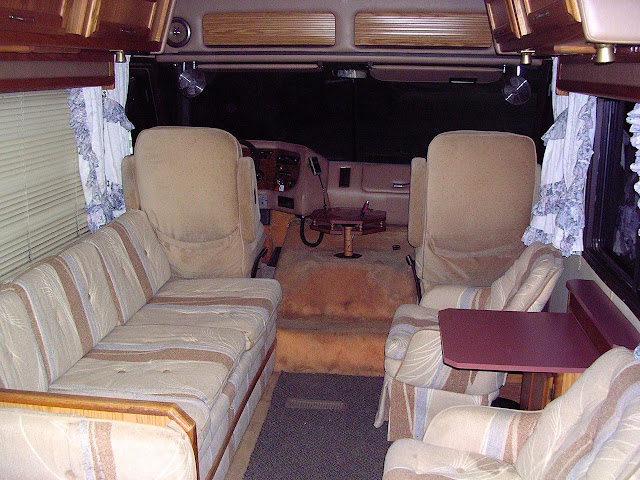 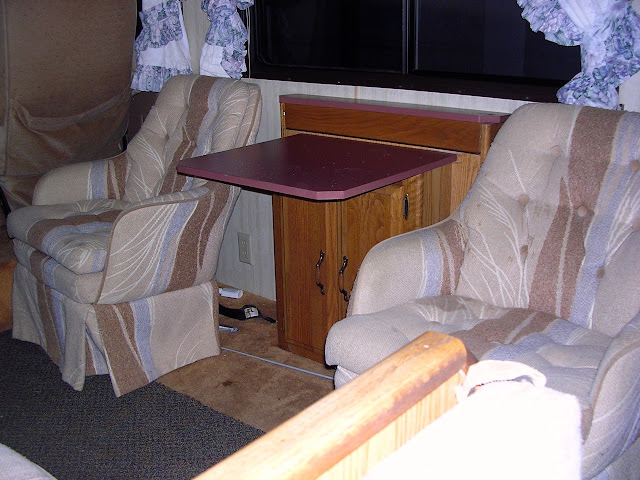 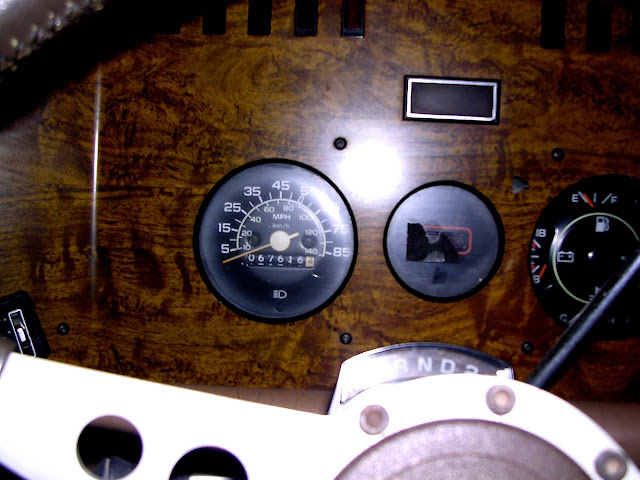 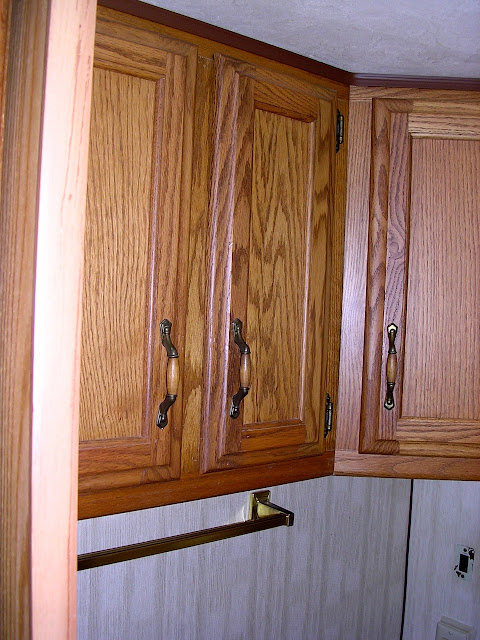 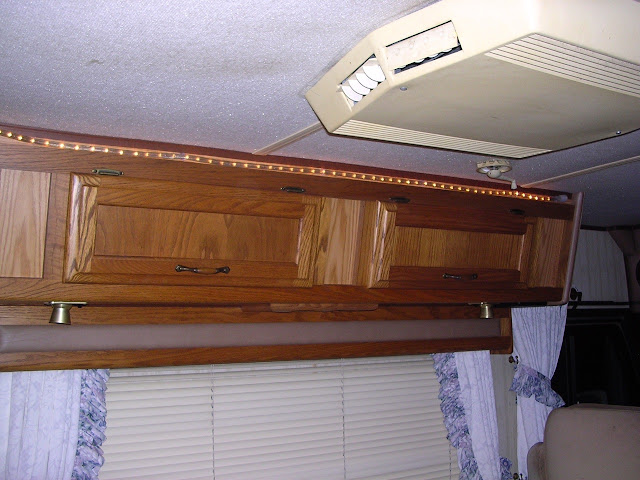 at May 14, 2014
Email ThisBlogThis!Share to TwitterShare to FacebookShare to Pinterest
Labels: 1987 Holiday Rambler Presidential, Decision is Made, Purchase, RV Class C, Vintage RV