The Hounds & I Are Doing Well

One thing I have noticed since my retirement started in April 2014, time passes much faster and days fly by. Unless you have a job where a calendar is involved there are times I forget what the date of the month is. I was shocked to see it's been almost two weeks since my last post. I basically got into a daily routine away from the computer where I had a days full of activity plus I spent many hours reading books that have been laying around. I haven't even opened my blog site for at least the past ten days, I think. I haven't read blogs from my list so there will probably be a lot of reading to catch up ... something I can do as the temperatures move to the 20s and more time will be spent inside.

Heidi is starting her 3rd week of the new medications. The skin photos don't show a lot of improvement since we started, but the dry crusty spots have turned into soft normal skin with hopes of continued improvement back to where hair will grow back. These photos are right after her bath with the medicated shampoo. Later on the red spots calm down to where they are not as noticible.

She acts as if she is out of pain. Just this week for the first time in a while she returned to her demanding ways by barking when she wants something. She is returned to going outside with the Winston and Sadie as many times as they do, instead of staying inside. She has never lost her appetite no matter how bad her skin looked. She is also back to running around the yard and her tails is wagging much much more than when she was under the shots. 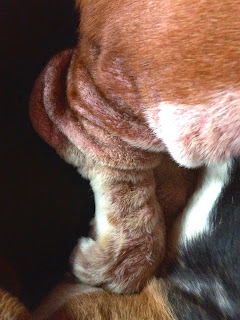 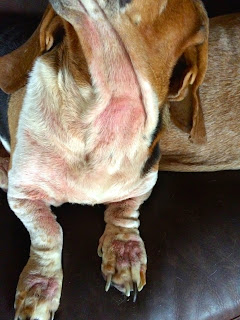 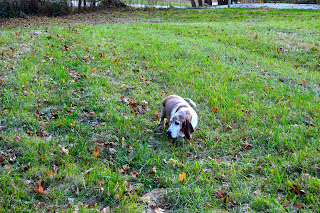 Winston is the same laid back lazy basset and Sadie as usual, Sadie ... seeking more and more time on the couch with the change of seasons. The switch of Daylight Savings time has affected all 3 hounds as they want to eat an hour earlier and they wake up and want to go outside an hour earlier. Instead of adjusting their dinner time to fit the time change, I have adjusted mine by getting up an hour earlier and feeding them at 3pm instead of 4pm. 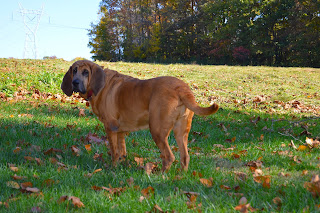 Sadie is now a photo hound and likes to have her picture taken more and more whereas before she would either walk away or turn her head away from the camera. She likes either the Nikon or the iPhone cameras. 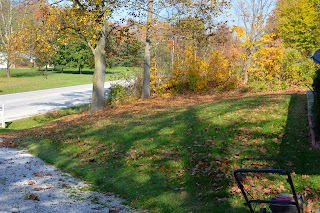 I had posted a few weeks ago that I had started my annual leaf removal. When I started, the trees had lost less than half of their leaves but it was the right decision that I started when I did, instead of waiting for all the leaves to be off the trees. The high wind I was hopeful for did show up and helped quite a bit in the leaf removal. As recently as yesterday and last night it cleared the yard fairly well after I had mowed the yard for the last time this year. This photo is from a couple of weeks ago and not the finished product. Those leaves you see in the yard were all blown away by two different days and nights of windy conditions. 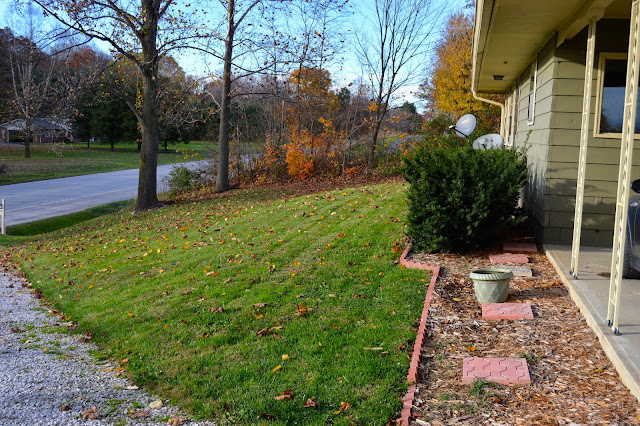 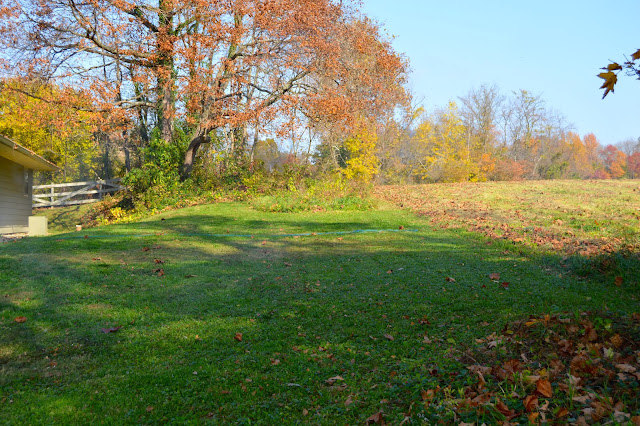 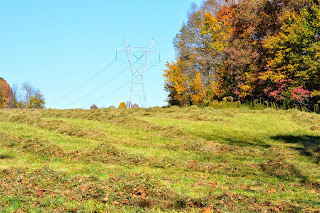 As the hounds and I did our daily walk through the field, I was hoping the farmer would make one final trip to cut and bale the field one more time before winter. Last week on a early Thursday morning I heard what I thought was a tractor in back and sure enough they were making a 2nd cut for the year. It's a small field and it had not grown very tall the past couple of months even though there was plenty of rain this summer to keep everything green. He was able to get 16 rolls of hay on this fall cut. The field is cut short enough it will be much nicer to walk through this winter and is also short enough that I have been able to ride my G2 Timberline Mountain Bike around the edge of the field for a good workout. 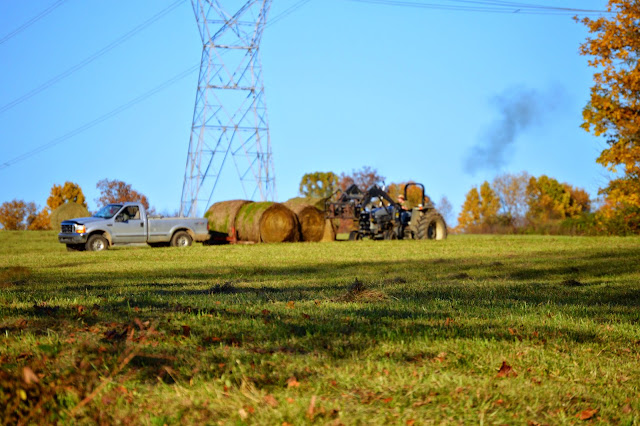 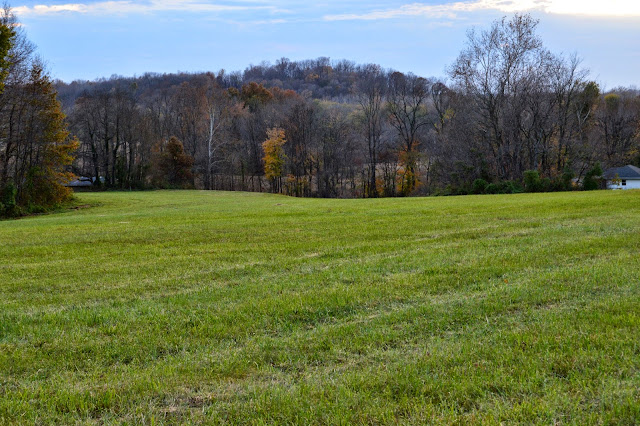 We have had some great weather this fall but the temps started to drop recently and as of tonight it's headed for the 20's and a 10 day forecast temperatures ranging from 20's to mid 30's and only a couple of days of snow. I know the upper Midwest is already getting pounded with snow, but here in the "tropics" of southern Indiana it has to be almost the middle of winter before we get a lot of snow. I am not concerned about the 10 day forecast.

There have been some pretty nice sunsets recently. 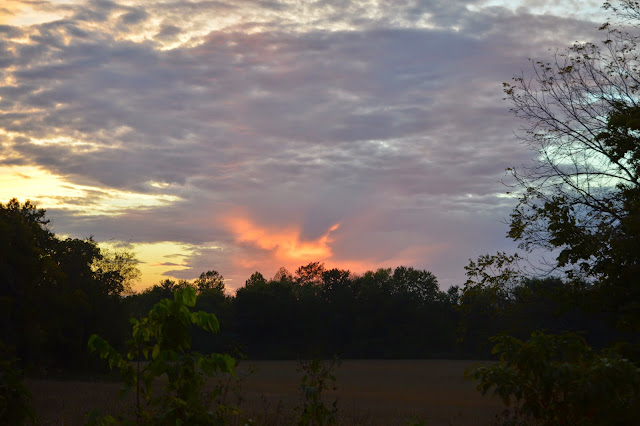 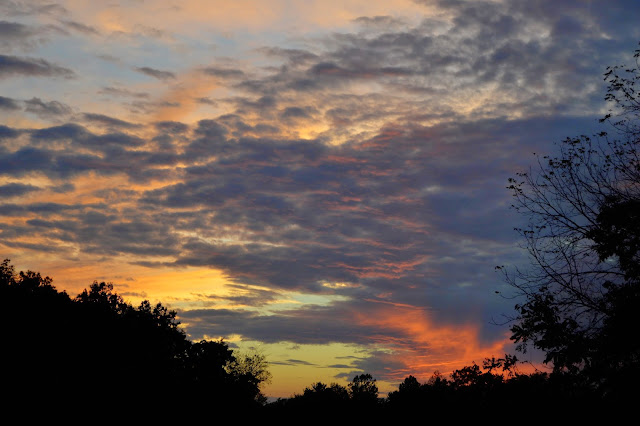 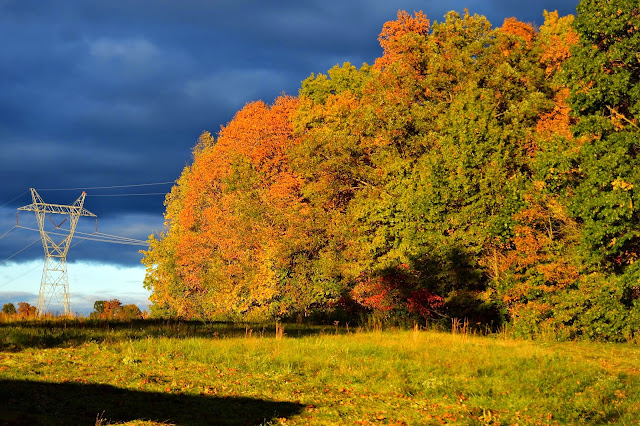 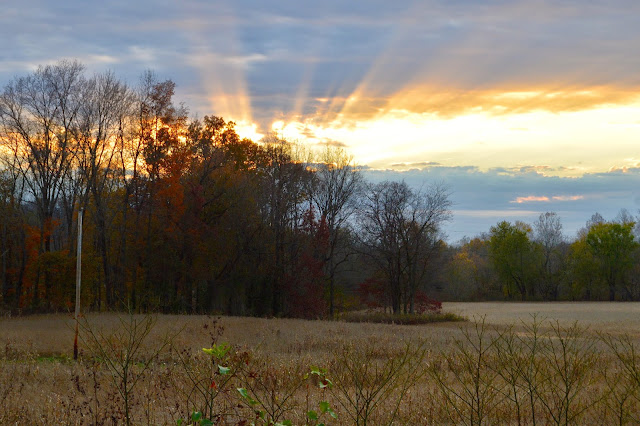 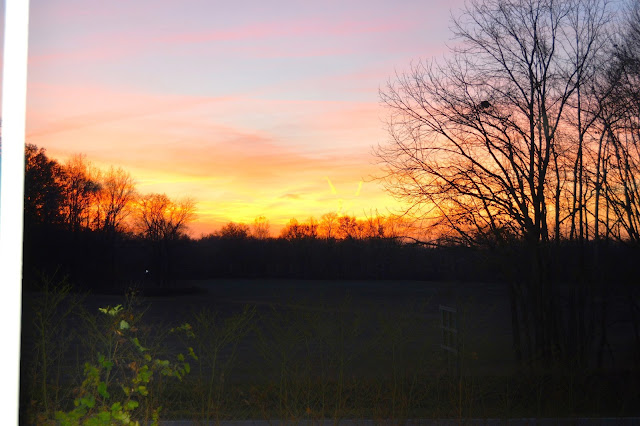 You might asking, with the temps dropping and a freezing winter hiding right around the corner, what is my thought process on whether to hang out here or head to the SW for winter. The answer to that question is, I haven't had the urge to travel since I announced a few months ago that I had decided it was just going to be too much of an issue traveling with 3 hounds. I also have Winston limping at times with his older lower back problem, then Heidi's allergies are causing skin problems worse than normal.

I might change my mind once I actually feel and not read about temperatures in the 20's but right now I don't see any traveling planned. I'll probably hibernate. I don't have to be anywhere so there will be less snow shoveling to clear the driveway than in the past and the Toyota FJ will be able to migrate through any depth of snow that I encounter here. I have really enjoyed shutting off the computer and spending a lot of days these past couple of weeks, and nights, reading books. Many of these books I bought the past few years and either didn't finish them or never started them.

I am still enjoying watching football games and college basketball is right around the corner. I don't see my days changing much from what they have been and there is enough going on to keep me and the hounds occupied. I am NOT saying I have turned to working my "to do" list because I like living everyday without a plan and just take it as it comes. Not having a schedule or a commitment is great. I basically do what I want when I want to do it. 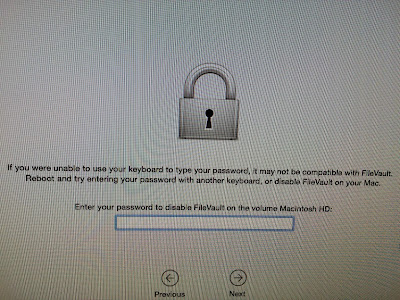 Just last Monday I had my first computer problem in the 4 years since I have owned an iMac. It was really not hardware related but I made a mistake of turning on a program with the computer called File Vault. This would encrypt my hard drive and give me added protection against hackers. My paranoia had flared up after reading any article about a recent breach in the system and I made a huge mistake by activating it. It locked me out of my computer and $200 later, I found out that my Apple Wireless Keyboard and Mouse Pad was not compatible with the program File Vault being turned on. It's a long story that I will post about later in detail and tell about the disaster experience I had with the Geek Squad and their attempts to "repair" my computer. You will find it quite interesting and possibly entertaining since you are not involved....lol.  I did remain calm throughout the process, which surprised me since I was without a computer for 6 days and I had ran out of patience. My iPad Mini pulled through as a spare computer.

Well that's the latest update from the "tropics" of southern Indiana. I am going to make a couple of cups of coffee and catch up reading the blogs listed on the left. Thanks to those that emailed me asking if the hounds and I were doing ok. I apologize for the lack of blog postings the past couple of weeks and hope to get back to regular blogging.