Not Much To Report 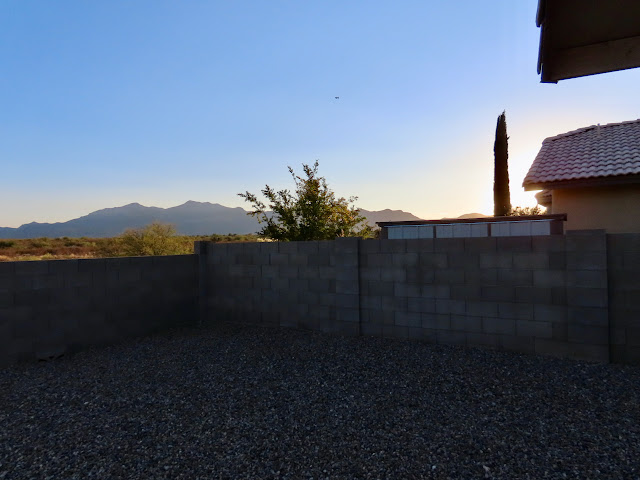 As you will see from the number of photos and lack of activity, there is not much to report for these past few days that is blog worthy. Stella, Heidi and I do the daily walk without a camera. Walter and I take out the trash as he walks with me. Henry is growing faster than fast and Heidi has been camping out alone, inside or out. 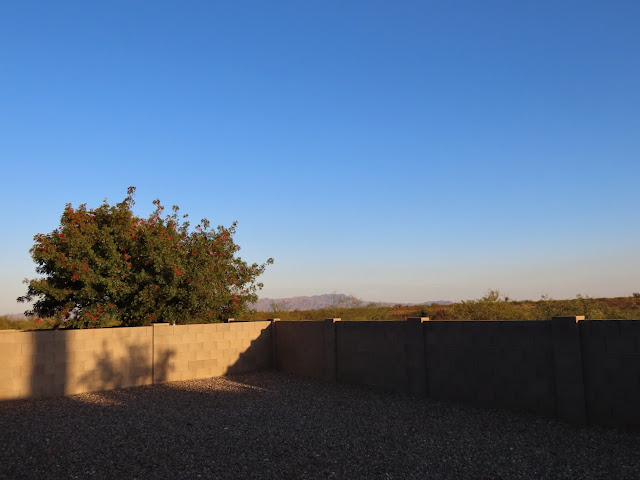 I was going to put up two of my Canon cameras on eBay. I have yet to figure out their settings and still cannot understand how they take such a soft image without clarity in the automatic mode. I thought these photos were going to turn out okay but they don't compare to my iPhone or the Nikon D3500. I will take photos of each camera tomorrow and put them on eBay with a 'no reserve' auction, the highest bidder gets them no matter what the price. They will be shipped in their original boxes with their owner manuals. 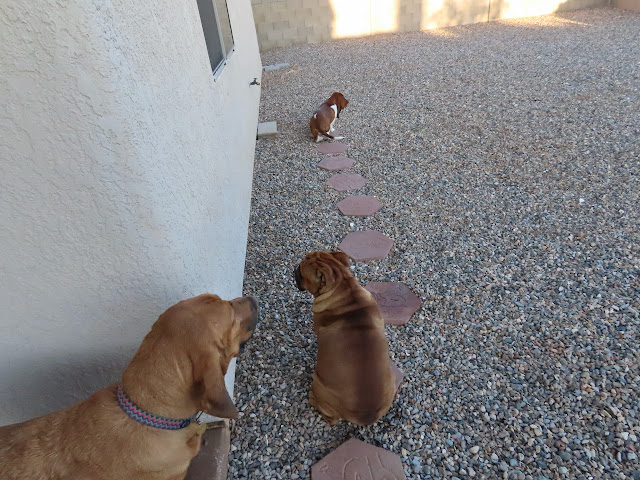 The two cameras I am talking about are the Canon G9 X Mark II and the Canon Powershot SX70 HS. 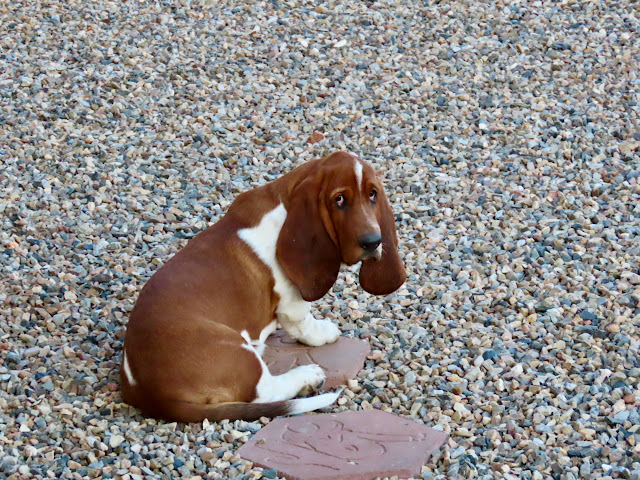 Since our last post, Henry has checked out the length of toilet paper from the bathroom around the corner in the hallway all the way out to the living room. He has eaten plant soil, even from unopened new bags, tried to lay inside the water bowl you see sometimes in photos. Yes, on the kitchen floor. As of Friday night decided to let Walter know he was taking over the sleeping bag laying on the floor. He lost that battle so he sleeps a foot away with Stella, next to the bed blocking the doorway. 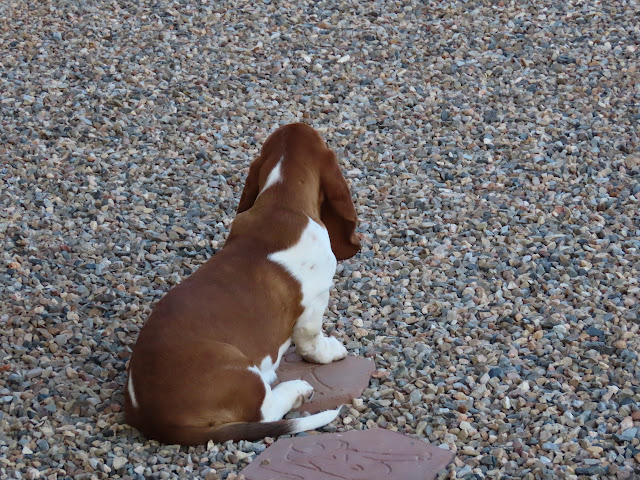 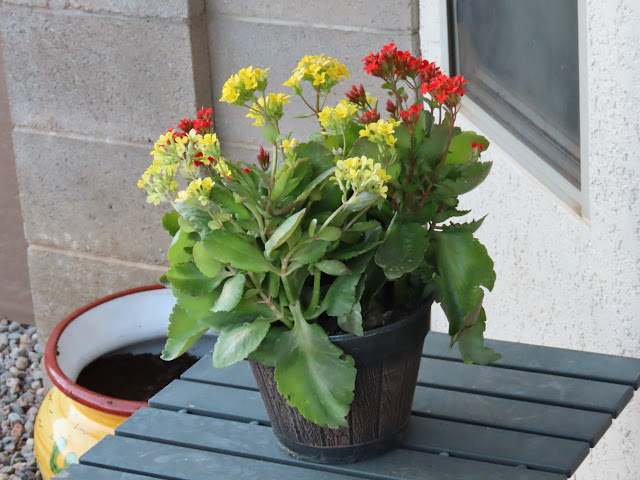 Just one of the many potted flowers and plants I bought on Thursday and Friday. I am sitting them in various locations, inside various pots to see where I want to plant them. Luckily all of them have "full sun" on their label. 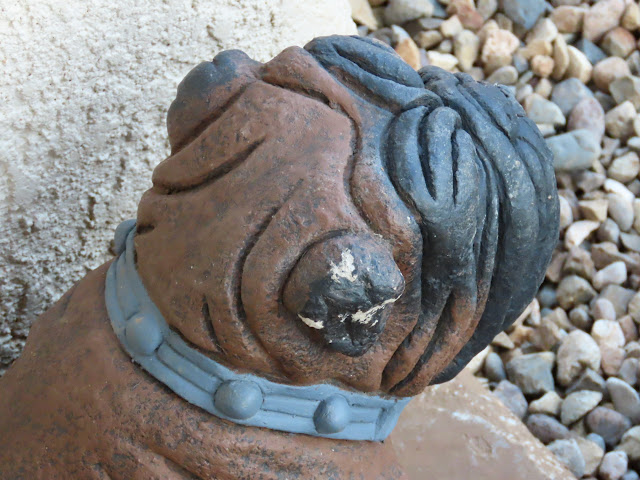 Either Walter or Henry has been chewing on the guard dog's ear. I don't think they like him since I caught Walter trying to shove him off the patio with his nose and head the other day. At least Walter hasn't lifted his rear leg on him yet. If you know what I mean. 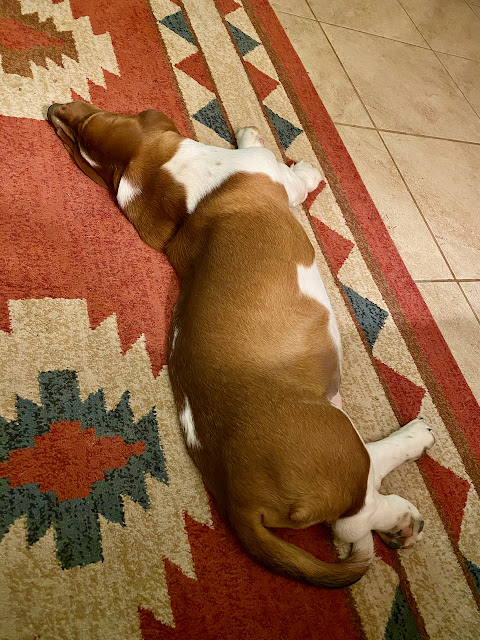 That's Henry's favorite sleeping position although in this photo he is out in the open. He likes to lay right up next to anything and then curl his head round the corner, bending his neck and head opposite the most comfortable position. 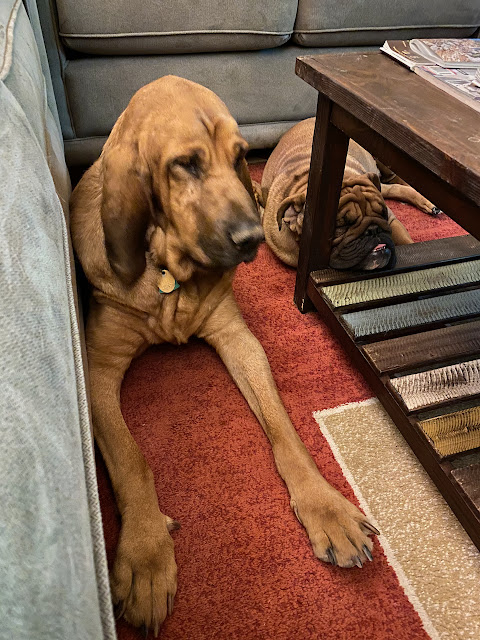 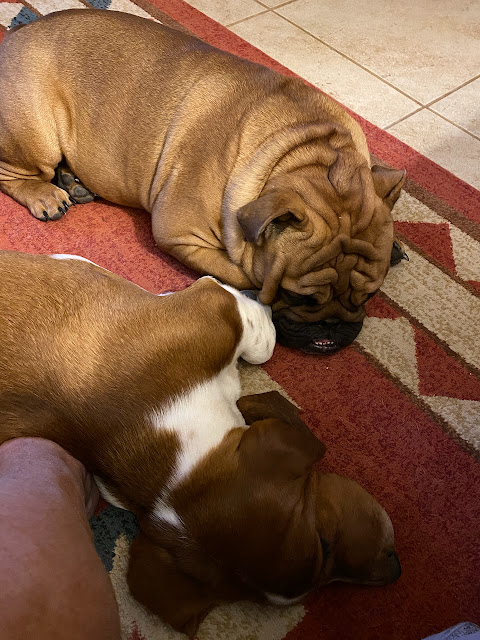 I can confirm after another week of living it. Walter likes to start the day for everyone at 4:10am. If anyone is sleeping he will walk around to each of us and wake us up by either pushing his nose/face into us or making one of the strangest noises I have ever heard come out of a dog. Something between a growl and a cry in English Bulldog language. Hard to describe.
I rode my bike on Saturday after 38 days off. I will ride every other day and force myself not to ride back to back days for the first week or so. I have changed from plant based protein and high carbs to meat protein, lots of it and higher fat, lower carbs. I feel much much better, no indigestion, no feelings of being bloated and fat plus I have been sleeping better. I am also not always hungry.
I have my 64 VW double door panel van on eBay for auction so IF it sells, I can then buy the 63 panel van that I sold back in 2007. It was and remains my all-time favorite vehicle. Plus the 63 is a much better vehicle.
Why did Joe Biden's website developers buy antifa dot com and have it redirected to Biden's campaign page? It's not new, it has been like that since he won the democratic nomination. I know why, it's to drive traffic to his contribution page. That shows up about ten seconds after it goes to the Biden website. Don't believe me ... type antifa dot com in your url box and see where it takes you.
I've been watching college football the past two weeks, IU games, so my life is back to some normalcy.
Another great few days here in the 'wild west'.
at November 01, 2020