Almost Back To Normal 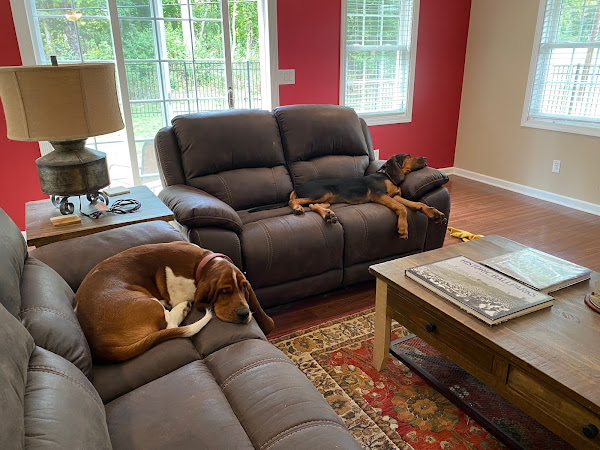 The hounds look the way I have been feeling most of the time these past couple of weeks. My head has been feeling much better with each day passing. I would say I have been doing normal stuff around the house inside and outside. I drive without any problems. I have done some yard mowing and built a new small flowerbed on the side of the garage. I don't feel my head throbbing when I sit up or when I get up out of a chair. I have not tried riding the bike indoors yet to see what reaction I would have with a high pulse rate for an extended period of time. I have ridden the tan bike that came with my VW bug .1 of a mile to my friends house up the hill and around the corner. So things are good, I just wish I didn't feel so tired. 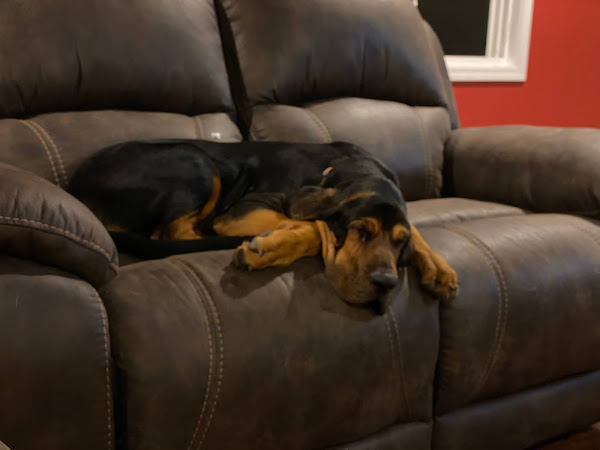 A lot of my lack of blogging has also been because of a lack of photos. We don't take walks here but will start. Yet those walks are not like the ones we did in the field a few years ago, nor like the one we took while living in Sierra Vista. There are a lot of passing dog walkers in the neighborhood but they are mostly in the street that has little traffic and the only place the hounds could sniff and explore would be someone's front yard. Walter??? Never interested in walking anywhere. 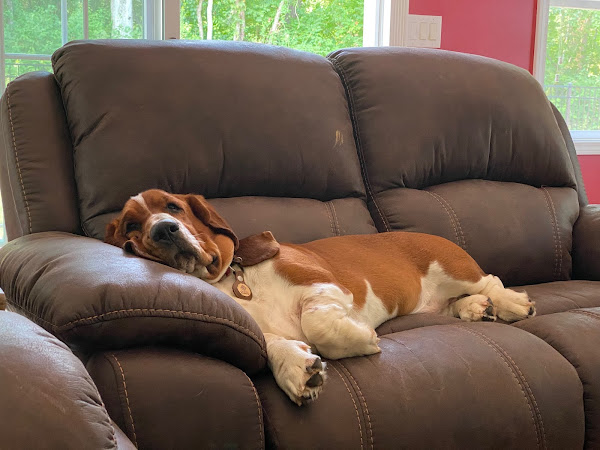 Henry survived his neuter surgery with no problems, dissolvable stitches and didn't need a head cone. I keep wondering whey they gave Walter an head cone when I said it was impossible for him to reach that far back. I took the cone off his neck as soon as I got home. They also gave Walter regular stitches that had to be removed two weeks later. Same procedure, so why the difference? With the new house rules that the dog and hounds could get on the couch, that has dog proof features built in (Furniture store told me that), they have been enjoying their naps a lot more I think.
Not this morning but most mornings after they eat breakfast they are playing and running from the yard, through the opened patio door all the way to the front door at full speed, chasing each other. Walter leads the sprint and likes playing with the bigger hounds. They soon retreat to the computer room for their morning siestas to start their day. 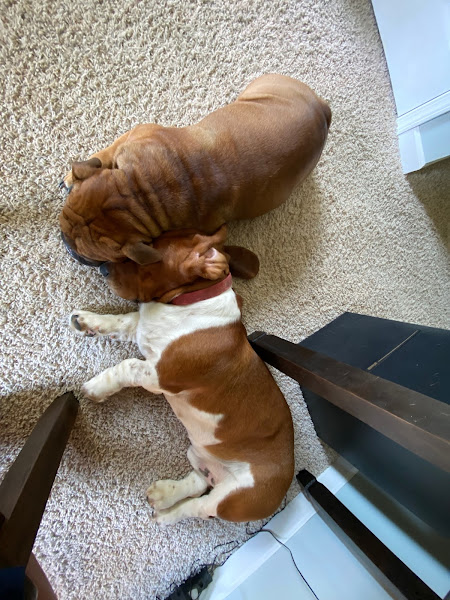 Bad angle trying to get both in the photo from sitting in my desk chair. The cooler temps have a feeling of fall to them. Wunderground tells me the temperatures are the average for this time of year, lows in the 60s and highs barely past the high 70s. No feelings of sticky humidity although last week we were back to summer temps in the 90s for a few days. So most of the time the windows have been open 24/7. 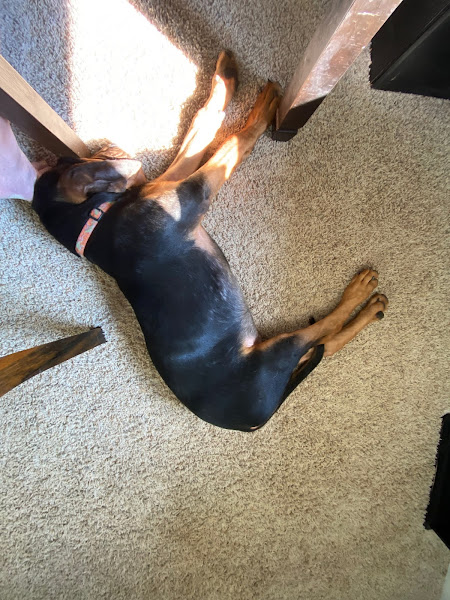 Watson has grown a lot since this photo from last week. He keeps me busy most of all. Constantly finding new things to analyze, eat or chew. He favors plants and dirt but luckily does not dig in the yard. He is and has been house trained since I got him at 8 weeks old. I don't know how she did it with four puppies but he has always gone outside on his own or to the door when he needs to go outside. At night he will wake me up around 4am to go outside but most of the time he sleeps through the night, uncrated, with Walter and Henry. 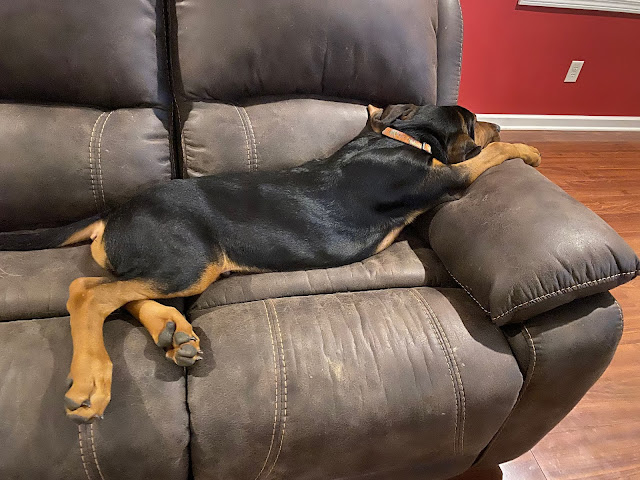 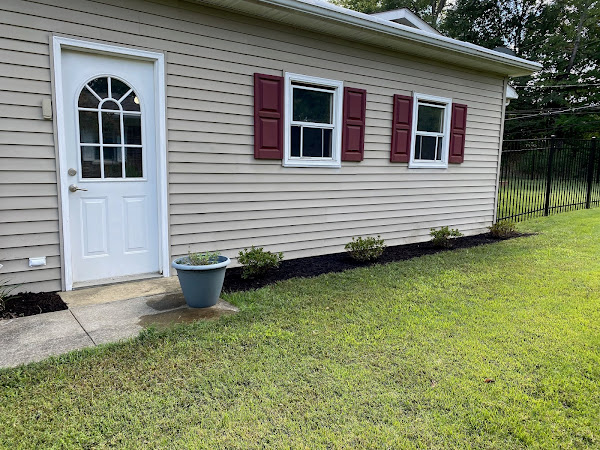 Once the temps were cooler and I was feeling pretty good after mowing the yard each week in 50 minutes, I decided it was time to build this small flowerbed. I don't have any before photos for comparison. The grass was right up to the foundation of the house. The azaleas were bought to replace to rose bushes on the other side of the house a month or so ago. With them being the larger size, they are suppose to grow 3' tall and about 3' in diameter. So eventually that bed will be filled in. The petunias in that pot did not survive the hot summer even with regular water. There is still some blooms and a few green stems, showing it is putting up a fight to survive. 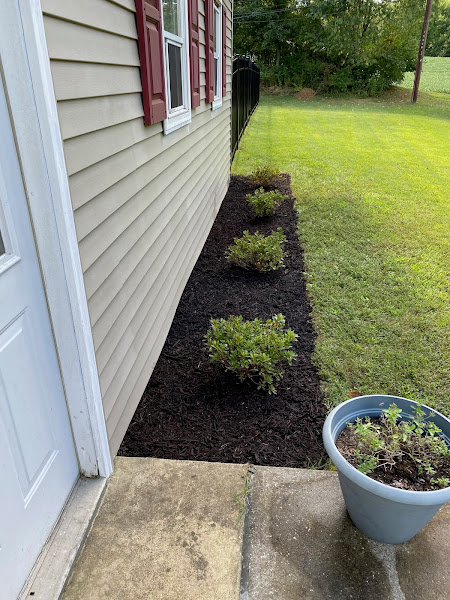 I still need to add some edging and will probably wait until next spring to do that. It was pretty simple. I dug just below the roots of the grass to skim that off. I was going to spend time leveling the bed and even make it a little deeper but with the hard clay, getting the grass dug up was enough exercise. It was easier digging the holes to plant the azaleas. I forgot to put the black plastic weed prevention in before the 3" layer of mulch. I'll decide what to do based on the number of weeds I see next spring. 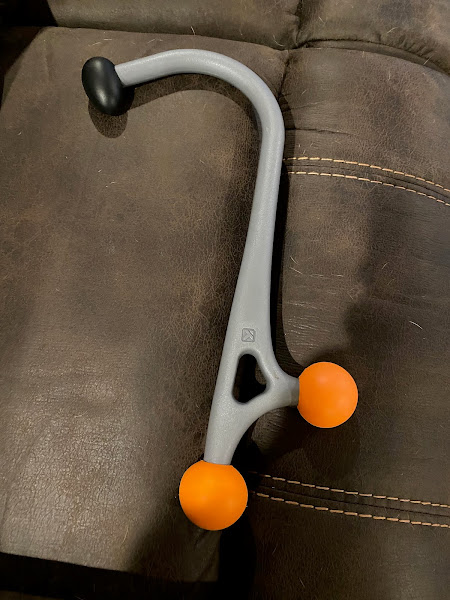 One of the best tools I have ever bought. That black knob goes between your shoulder blades or over near the shoulder blade. Then you pull one of those orange knobs and getting rid of a tight back or knots in your back from sitting at a computer too long. The best $21 I have ever spent. I had to go to YouTube to see how the thing operated. It's a great pressure point tool. 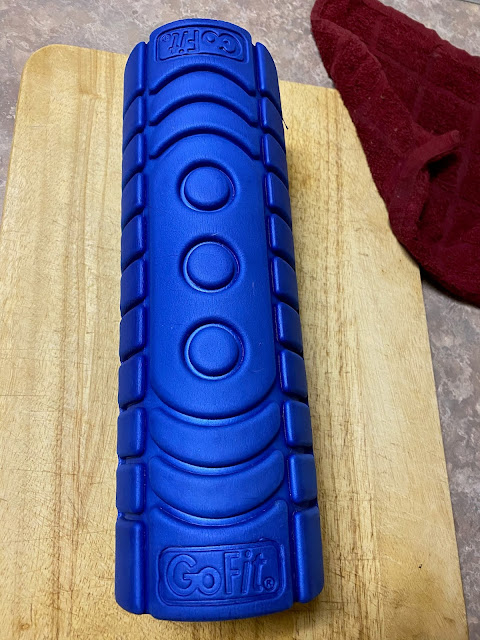 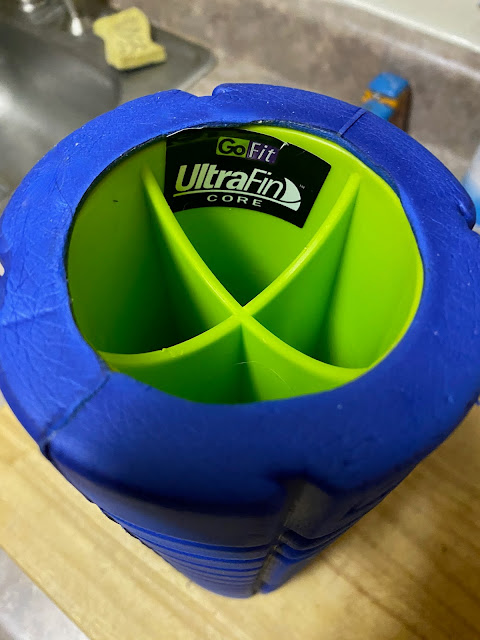 Another thing that really helped my stiff/sore neck last week was the back roller I bought a year or two ago. Making a few trips up and down the spine while laying on the floor, really helps getting the neck back in alignment. It also gets rid of the painful knots easily.
In preparation for winter, I needed a tv to put on the cabinet I brought with me from the Arizona move. It would sit at eye level for playing PGA Golf, NFL, MLB and the Grand Turismo racing on PlayStation 4. I almost bought a new tv just for that since TVs are now designed for "gaming" but decided if I was going to buy a new tv then it would be one used for ballgames and movies and I would move my older tv to the living room.
After a few days of research and reading so many review sites that caused me to have information overload, I headed out to Best Buy late Tuesday afternoon to take a look at some models in person. The problem was they did not have the Sony tv's turned on, just Samsung. Those were the two I was trying to choose between. I had a Samsung in the past and a Sony now. Well I tried three different salespeople and not one could help me. I guess they are not on commission. I walked out, took my money and went home. They wonder why people buy online now and have it delivered.
That turned out to be a good thing.
Yesterday morning I attempted to buy a new tv locally. The salesman walked out behind the counter and proceeded to tell me more information than I had asked him. I was able to see the differences in picture and was home installing everything within the hour.
Not much planned today. I found out last weekend that I could not watch 14 hours of college football on Saturday like "the old days". The past couple of years in Sierra Vista, those fall Saturdays were spent riding the bike in the morning and/or hiking the nearby trails in the afternoons. Although in September 2019 I was slowly learning how to walk again after my hip replacement. I still did not sit and watch a lot of football during that time.
The weather is so nice here so far in September that I wanted to be outside even it it was nothing more than sitting on the patio and enjoying the day. For some reason I did not feel like taking photos of the hounds and the dog while they were in the yard.
So as an update I am doing fine and getting ready to add a few more activities to my days. I need to grab the Nikon off the bookshelf and get back to taking some photos but that may not be possible on dogs walks, while taking one hound at a time on a walk through the neighborhood. Walking unleashed like we did in the field a few years ago is not possible here.
All is good here in "the tropics" of Southern Indiana.
at September 16, 2021
Email ThisBlogThis!Share to TwitterShare to FacebookShare to Pinterest
Labels: Azaleas, Basset Hound, Bloodhound, Head Improvement