I got the call around 11:30am telling me he had eaten his breakfast with no issues. When they went to check on him he was standing up wagging his tail. They said after the doctor checked him later I would most likely be able to pick him up today.  I pulled in their lot about 1:39pm.
Of course he was a fan favorite of the staff. This experience was so much different than my other vet. She found my invoice with no problem and to my surprise it was $600 - $1400 under the estimate ... plus they had time to neuter him since the surgery was less in depth than she thought it might be. I asked if they could neuter him while they had him in the position yesterday but she didn't think so because it was going to be a long operation. They were planning for the worse but did not know the condition of his intestines until they got in there. 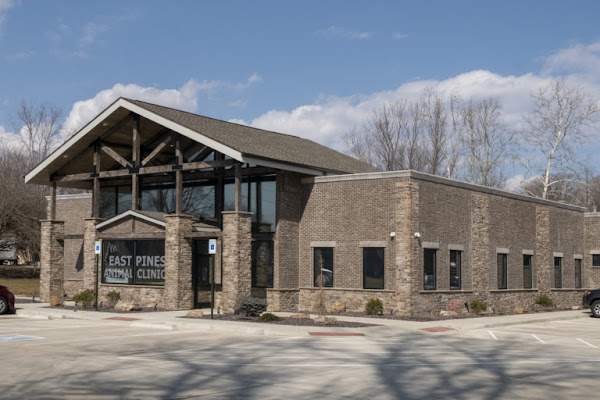 My instructions for the next 10 to 14 days were explained in detail with no "up selling" involved. Watson walked out with the cone around his head. He was trying to lick it off but once he saw me he stood on his back legs and we were practically eye level. She understood his excitement but told me try to keep him less active as possible so his incision would heal.
With my phone, wallet and an envelope with the invoice and instructions in my pockets, Watson walked out that right door under leash control. The funny thing was as he turned around he saw us in the mirror of the door and started barking at us. I had backed into the parking space on the side so it was easy to lift him into the back of the FJ with the dog bed for a soft ride home. He was asleep within a minute from leaving the facility and slept most of the 25 mile trip home. 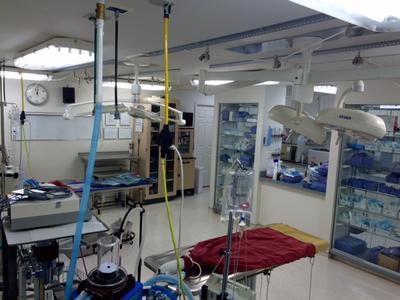 (Image taken off internet search .. older facility)
I will admit I was shocked that they did not include a 25 pound bag of the Science Diet I/D dog food at $100 for his recovery. She said I could feed him his normal kibble only in 4-5 meals per day instead of the normal 2 meals. That was a relief to me. I am not a fan of Science diet, especially when the #2 ingredient of that I/D food is "whole ground corn".
He was pretty happy to get out of the FJ and tried to jump on me in the front yard. I walked him to get him to calm down. I could see two other dog faces looking out the lower windows of the living room. I needed to have a tight grip on the 6' leash and shorten that to about 2' once I opened the door. I knew that Walter and Henry would be more than just excited. It was not a surprise that all three wanted to take off running in their excitement but I was able to say no to him and he stood right beside me until I started walking him to the garage. 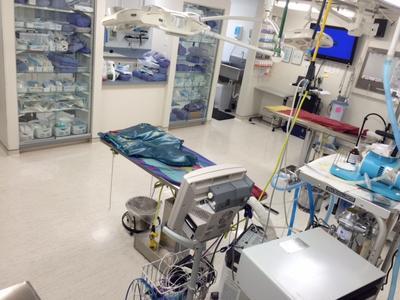 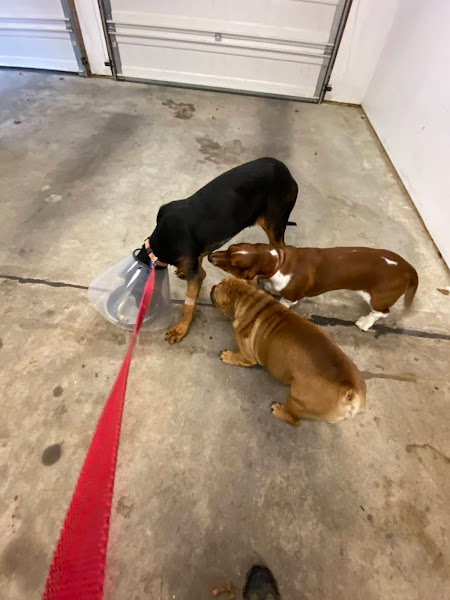 I wanted to see if he would drink some water and if he did I wanted him to have as much room as possible as I knew Henry and Walter were going to continue to check him out, check all the new smells from the operating room and make sure Watson's staples were intact. I was a little surprised how well he could drink water with that cone on his head but they had cut it back to the exact size needed. Henry's cone a few months ago when he was neutered with a different vet office was not like that. His was too long for him to reach the water dish or his food dish.
Henry and Walter inspected but were cautious as their noses moved all over Watson. 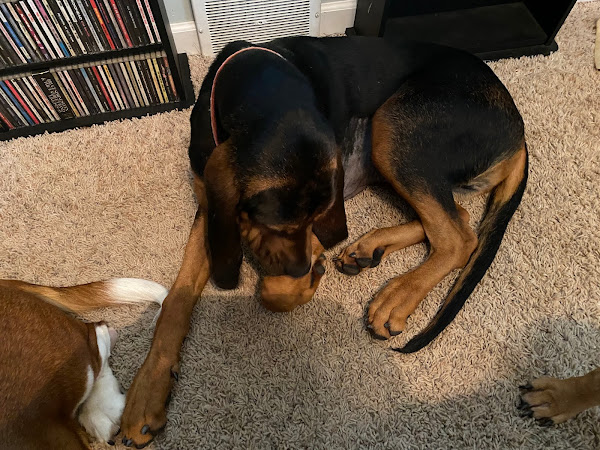 Once he finished drinking water I let him go where he wanted under my control. He walked through the great room out the patio door, into the yard and peed for a long time. He must have been holding it while he was crated at the vet's and in the FJ on the way home. It was also good to see no blood anywhere.
From now on I am going to really watch him. He responds well to the word no, so the chances are good his days of eating sticks, leaves, rocks, any kind of cloth are over. I don't mine paying for one mistake but not two of the same mistake. This means after he eats I cannot just let him go outside like before, I will have to at least put him on a leash for 10-14 days, then after that just be outside to monitor what he is picking up with his mouth. 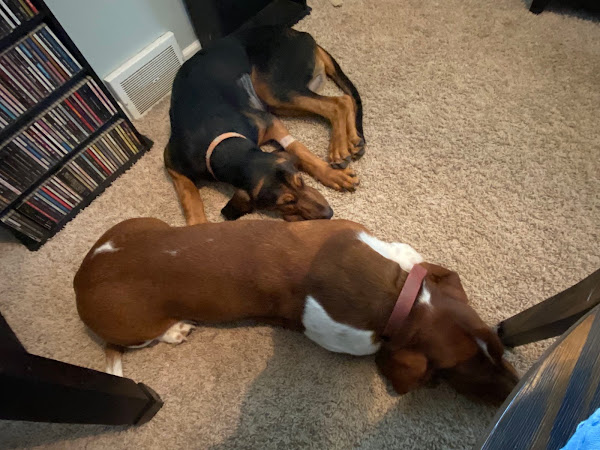 They did ask if I had a crate at home but said I could also keep him in a small room. I cannot do the small room because he would find something to chew on and possibly eat. When he was a 8-10 week old puppy he was crated at night and when I was gone without any howling. He should do fine and I will let him in there while I am here so he gets use to it.
We moved to the computer room where I shut the door. Easy to control two hounds and a dog in that space. He was happy to get the cone off which was held on with just three long strips of Velcro. Within minutes of his freedom he laid in his spot on the floor and went to sleep, along with Henry and Walter. 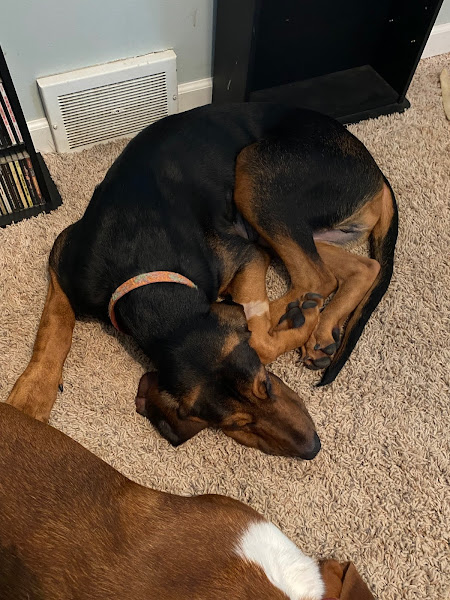 It was getting close to dinner time for all of them and Henry let me know he was ready to eat. To control the amount of activity, I let Henry and Walter out to eat and kept Watson in the computer room with the door closed until they were finished. That is reverse order from the normal routine.
I had a very small amount of kibble for Watson and he attacked that food like he had not eaten in days. It was nice to see that an hour later he had not vomited that back up. 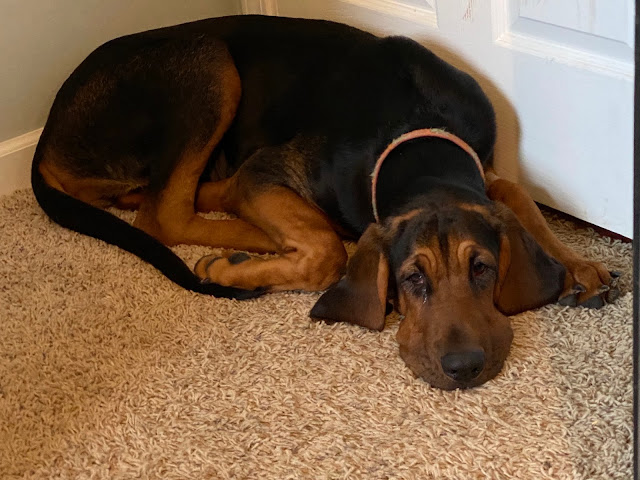 After a few laps around the yard all of us headed back to the computer room so I could put this post together as an update and I knew they would sleep like always after a meal. So far he has not put his nose back on his stitches but there is no way I can take that chance when he sleeps so I will have to put the cone on him at night.
I wonder if he even comprehends what happened. 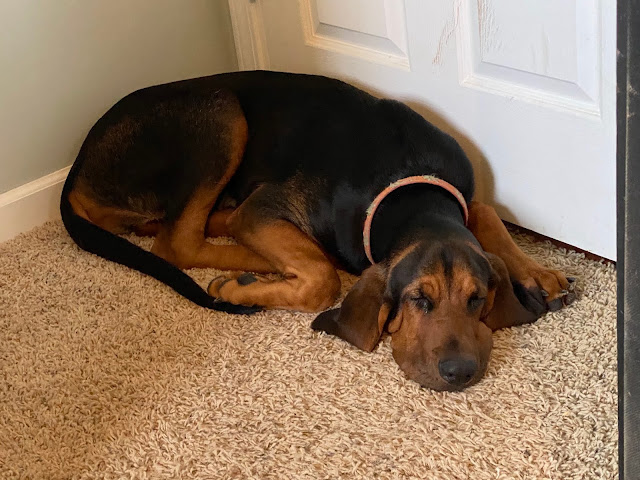 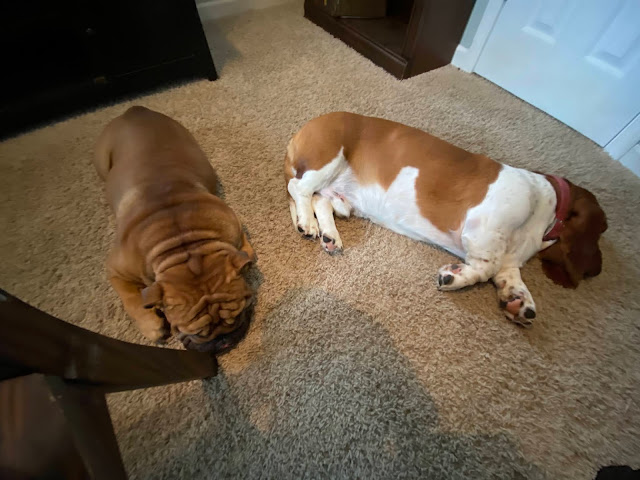 I wasn't even finished with this blog post and Walter was already in his middle of the night loud snoring. They were happy to see their bloodhound back home. I was too. It was just too quiet with just two adult dogs in the house.
It will be interesting to see how Watson does in the larger crate when I am gone. He will adjust no doubt and like I said yesterday, Walter will be right there with him until I return home.
All is good back in "the tropics" of Southern Indiana.
at October 28, 2021