The Hounds & Dog Know It's Colder 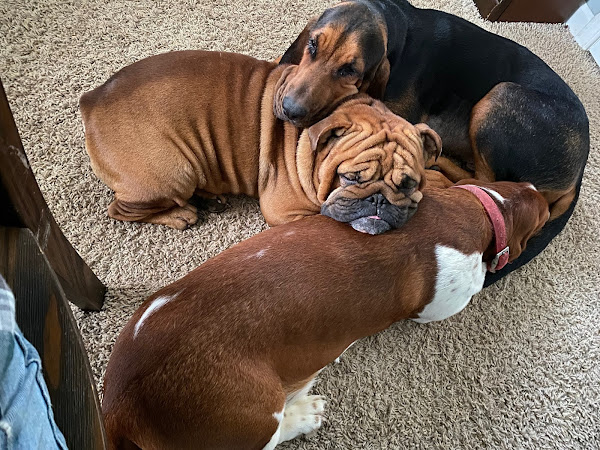 Yes it use to get cold over night in Sierra Vista, AZ but when those same daytime highs were in the 50's the sun was much more intense than here, ~4,500 higher in elevation, it was warmer. Here you have to wear a coat during the day. It is interesting to see the hounds and the dog change their sleeping habits as the temps drop outside with a warm house inside. 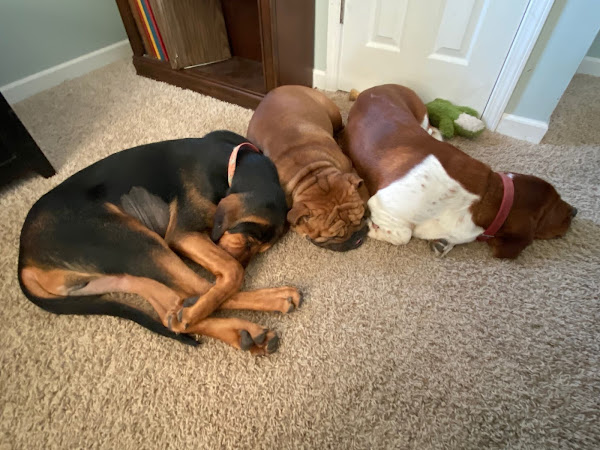 Watson continues to act normal with no swelling, no redness around his stitches. The vet called me yesterday to see how he was doing. I told her the biggest problem was trying to keep him from running, jumping and playing because he has acted normal since the first morning he woke up at home after his surgery. He goes back November 11th to get his staples removed. 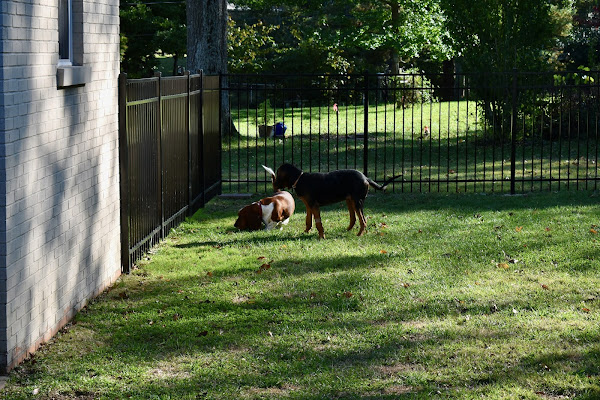 Today for the first time in a long time I grabbed the Nikon D3500 and walked around the backyard taking photos. 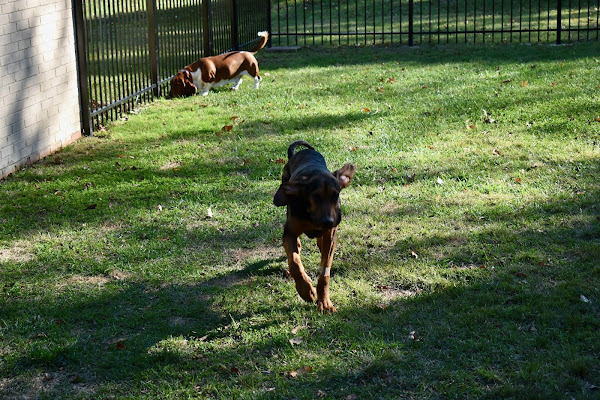 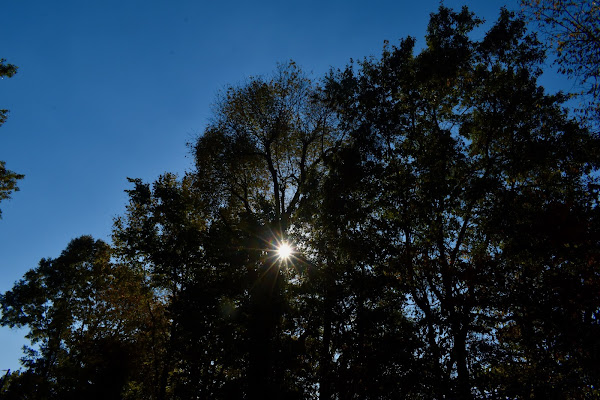 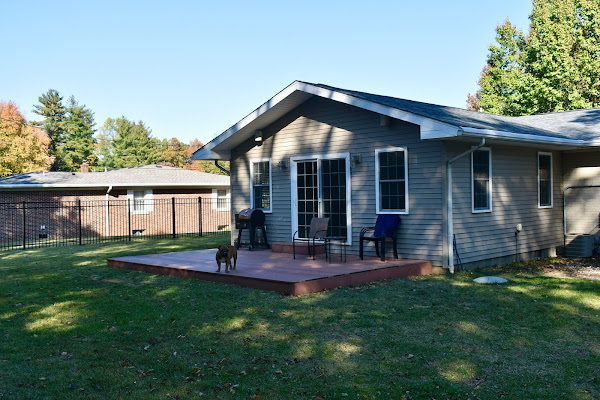 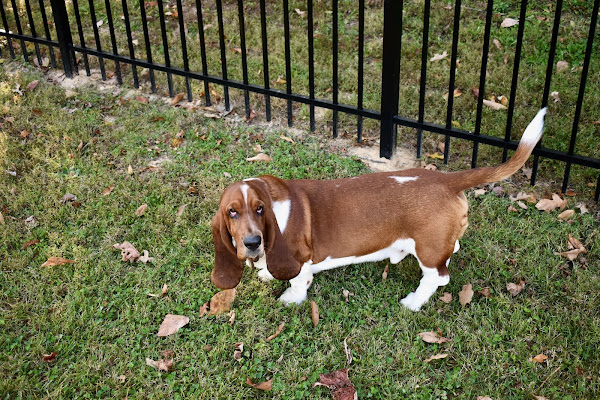 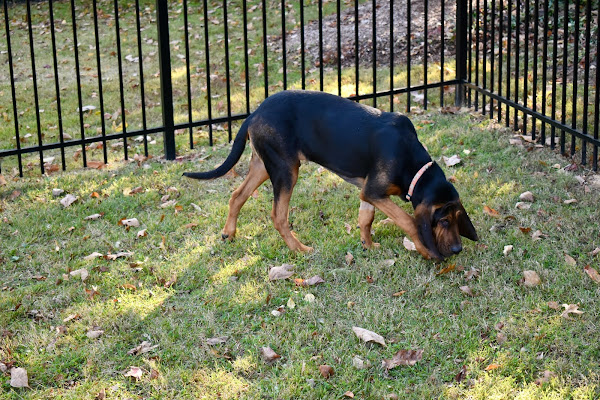 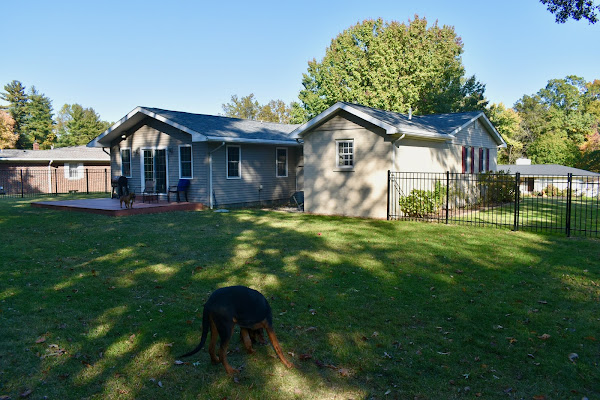 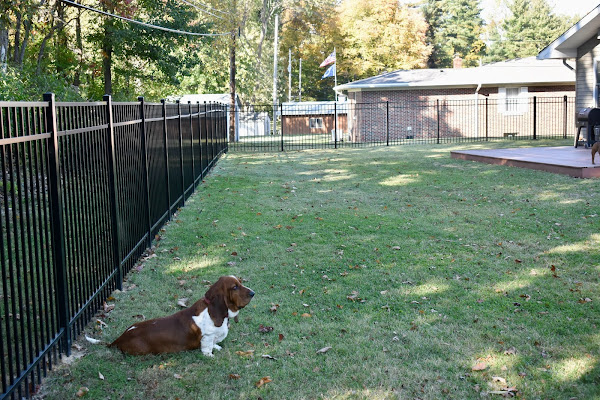 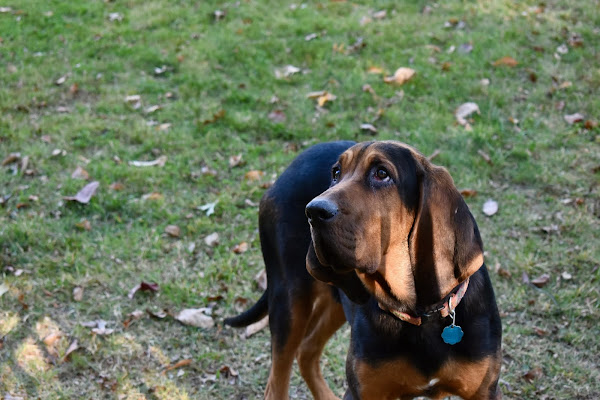 The sound of birds made Watson a little curious. 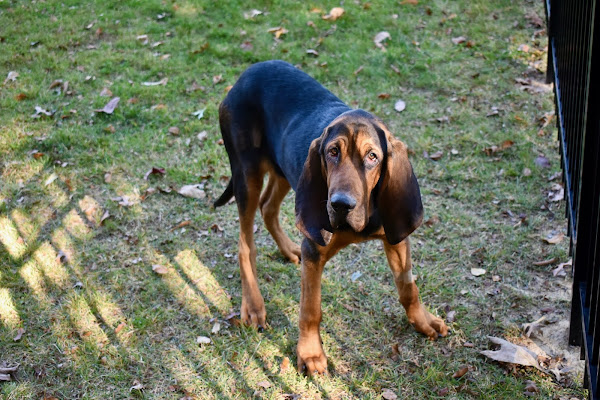 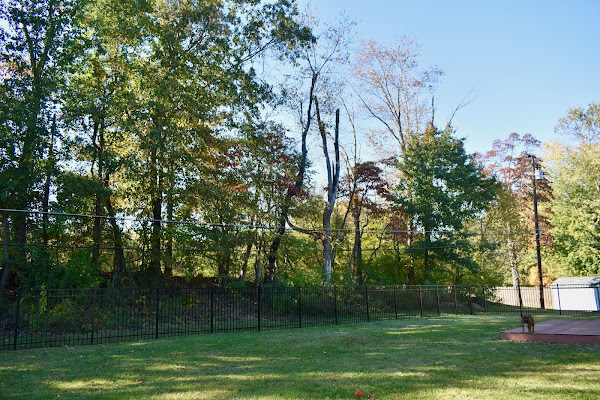 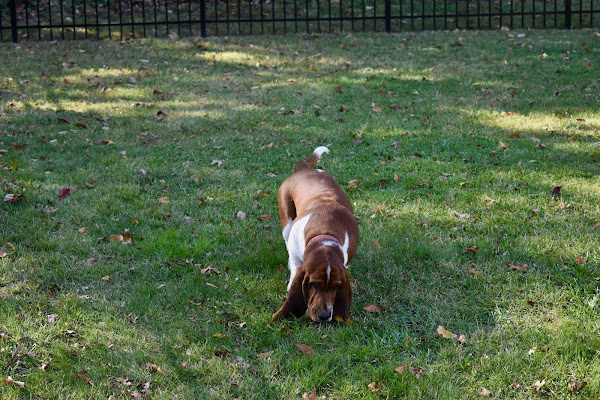 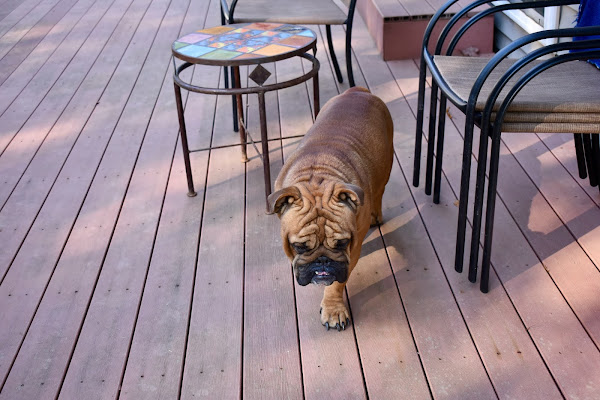 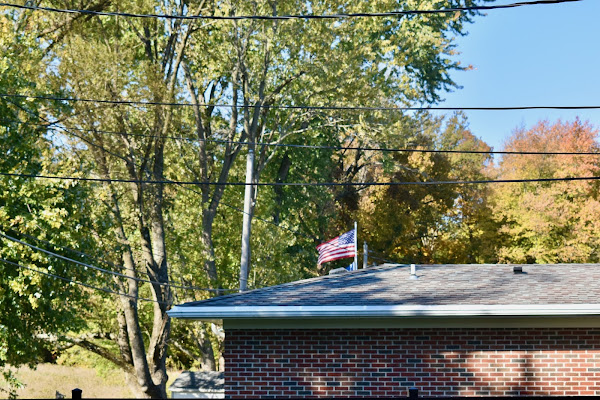 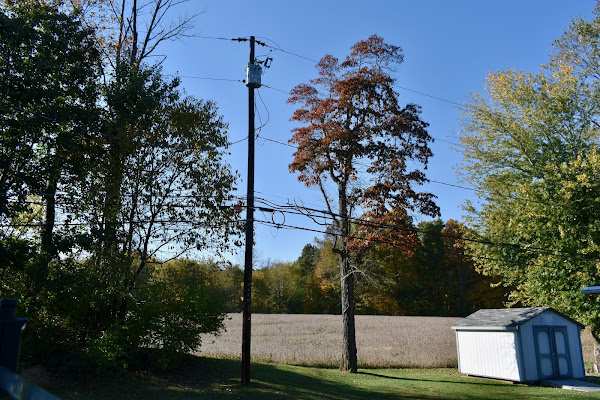 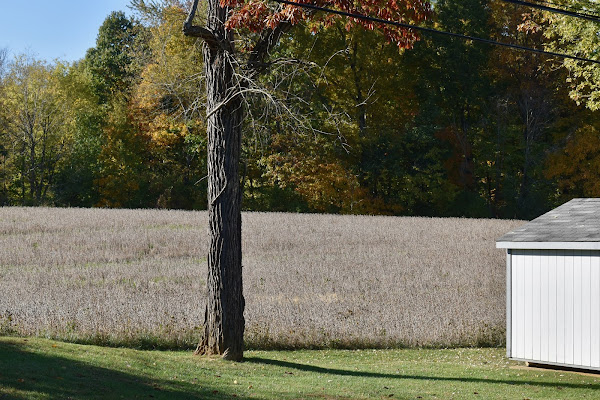 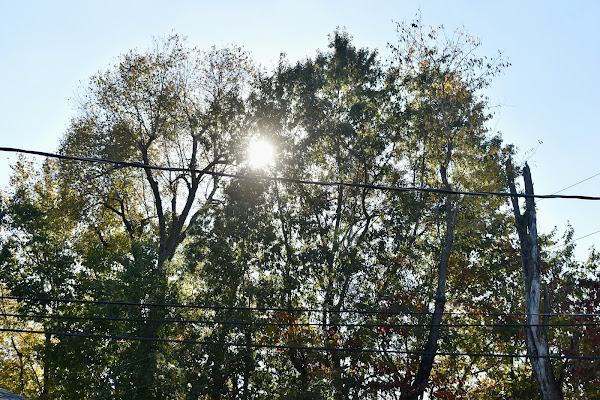 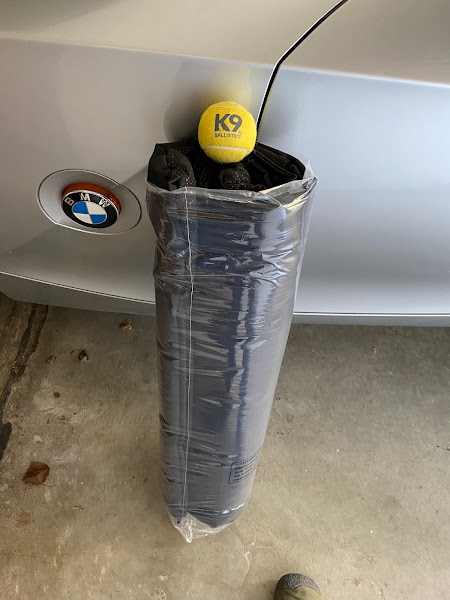 Yesterday afternoon the UPS truck backed up into the driveway while I was in the garage working. He was delivering a non-destructible crate bed for Watson. K9 Ballistics sent that ball along with the bed, which had some advertising in small print on the back of it. The ball squeaked when Watson would bite on it ... I doubted it would last long. 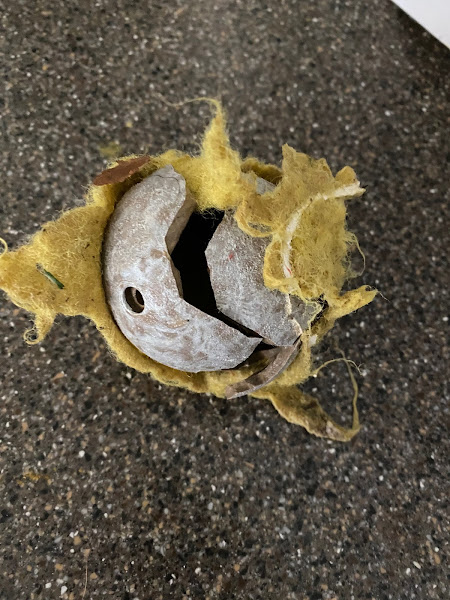 I made a short drive to the bank and when I returned 30 minutes later I pulled this out of Watson's mouth and then tossed it into the trash. The hard rubber red Kong Ball is about the only thing he will not destroy. 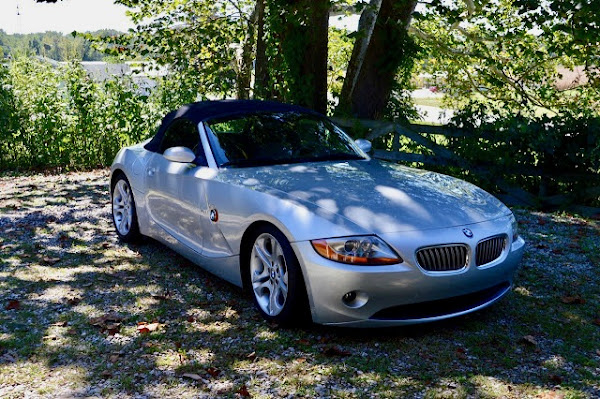 Long time readers might remember when I bought this car in 2016. It was a fun car to drive on those good weather days but I didn't put a lot of miles on it and finally sold it in 2018 to a car dealer in Evansville IN, a town that I live in now. A month after I sold that car I wished I hadn't. Over the years I would look at 2003 Z4's with the 3.0i trim and a 6-speed manual. There were not a lot of them for sale even when I would expand my search to nationwide, so I never bought one. Until Tuesday morning.

I was selling some wheels on Facebook Market Place and noticed I had a #1 on the icon at the top of the Facebook page. I clicked it to see the question that was sent to me. I replied then looked at the page full of stuff for sale. Nothing I was interested in. Out of curiosity I clicked the link "vehicles" on the left and this car was the first one listed for sale within 20 miles of my address.
It sure did look familiar and there was one unique thing that would confirm if it was my old car or not. It was these ... 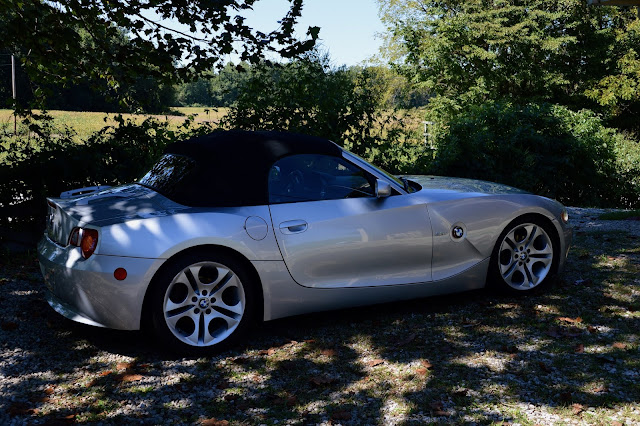 It was the brackets on the trunk lid for a luggage rack. It wasn't my favorite thing but I could never find a trunk lid to exchange so I didn't have the brackets. With the car located in Evansville and looking just like the one I had ... I had no doubt that was my old car that I sold in August 2018.

A glance at the trunk of her car confirmed that use to be my 2003 BMW Z4 3.0i. Without hesitation I sent a message saying IF the car was still available I would buy it within the hour. It was near 6pm but I figured it wouldn't last long. The seller replied that she would call me in 45 minutes. Yes, a lot of interested people, one was calling the next day for a test drive, but as she said "cash talks". I knew I would have to move fast to get my car back.
I had never seen any this good of shape for that year with a price of only $9,200. It was about the middle of the price range that Kelly Blue Book said a private seller should sell it for. We met Tuesday morning at the bank where we both were members and found out we lived about 4 miles from each other. After a quick test drive I handed her a certified check, she signed the title and I was off to the BMV to get it registered and plates in my name, along with the title.
Looking it over they and the dealer I sold it to, had fixed every thing on my "to do" list back in 2018. It still drives as nice as it did back then. She did not drive it much more than I did over the three years she had it.
I had a nice drive with the top down yesterday in 50° weather, no heater allowed and a nice down jacket on. It was great to have it back in the garage for those days I need "an escape" and enjoy the quiet I6 engine and the smooth shifting 6-speed transmission.
See, when I wait a few days to blog there is usually some breaking news here in "the tropics" of southern Indiana.
at November 04, 2021
Email ThisBlogThis!Share to TwitterShare to FacebookShare to Pinterest
Labels: 2003 BMW Z4 3.0i, Fall Photos, Watson Recovers