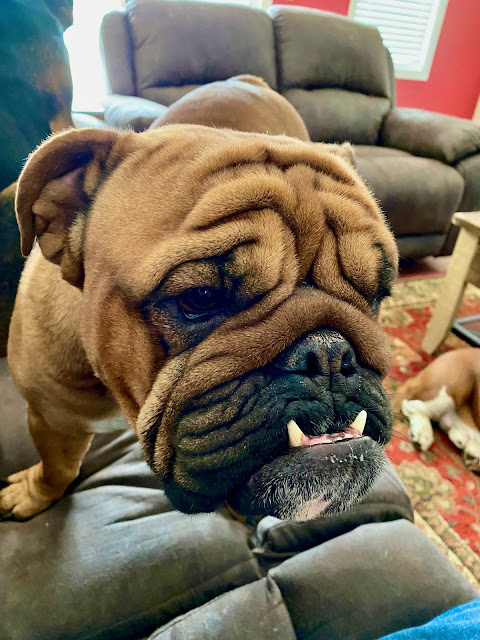 Things have been moving along as usual. Things are being finalized with things I have have been waiting on so that is good. As of a couple of minutes ago my Verizon problem is almost completed, so close but will need to wait a few more days to receive the missing refund. I will tell the update in detail at the end of this post for those that are interested. Snow forecasted for Saturday so the hounds, the dog and I are getting hunkered down for the weekend. Netflix will be a life saver it looks like. Probably will not be more than an inch of snow.  LOL 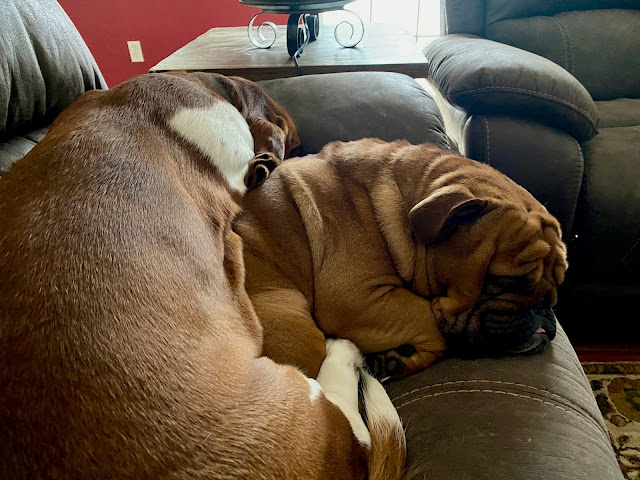 There are times when all three will try to fit on the couch with me. It is always first come first serve and once you have a seat do not get up to leave for anything. The seat will not be there when you get back. Out of the picture Watson is lying next to me as I sit next to Henry. I kept telling Henry no when he was looking at that very small space. He jumped up anyway and laid on Walter for his afternoon siesta. 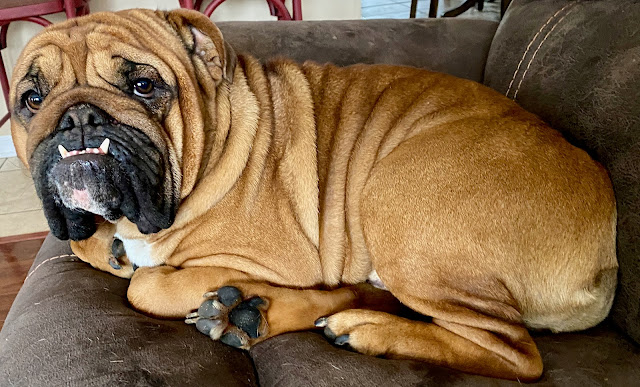 Walter is a serious tv watcher. When something is not right or he hears someone in trouble in the movies he becomes quite concerned and wants to help them like he does here at the house. He is a protector of Watson. At times when Watson and Henry are running full speed in the backyard and go into their patent roll to escape the one chasing them, he might hear a yelp or a cry from one of them and runs immediately to them to see if they are okay. If he suspects someone is at the front door, he is there checking it out. 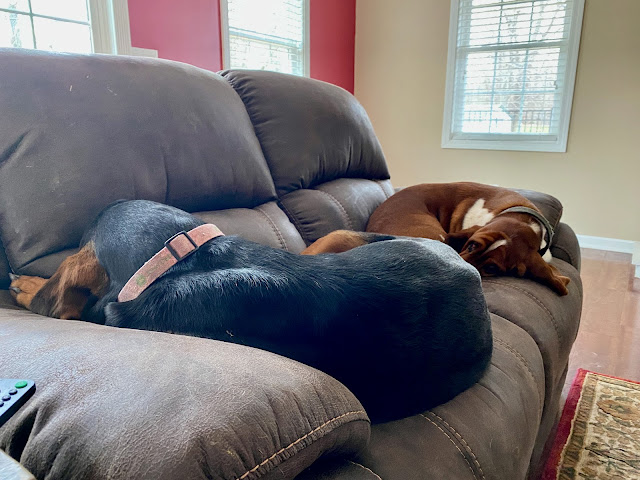 Last Tuesday I was so bored that I signed up again for Netflix. I quit last year when they raised their price and I was finding it hard to find something I wanted to watch, if you can believe that. I didn't blink at the higher price this year as there were some shows and documentaries I had seen on their website I wanted to watch. This is Watson's and Henry's normal Netflix position. 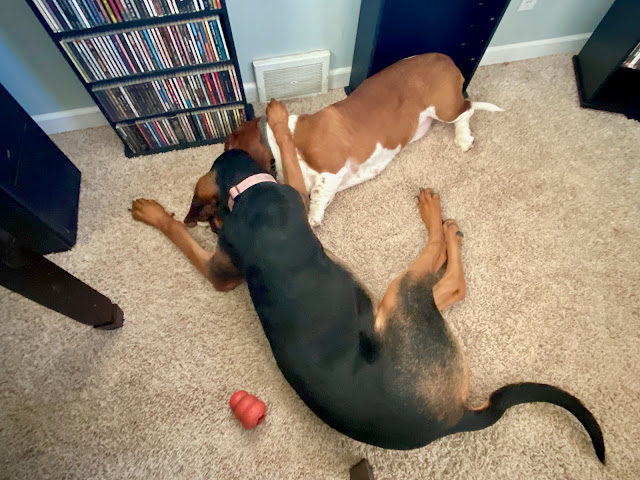 When we had a few days with temperatures in the teens I broke down and clicked that up arrow a few times on the thermostat to bring some heat into the house. As you can see Henry and Watson knew exactly where that heat would be coming from in the computer room. Their morning routine after they eat, play, trips outside and I am on the computer reading while drinking coffee. 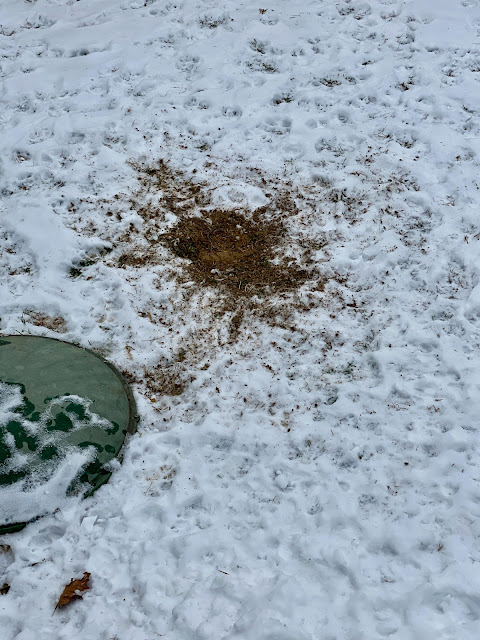 19°, the ground hard as concrete and who knows what Watson was looking for or wanting to eat, but I caught Watson in the act of digging in the frozen snow. Definitely didn't make me happy then I remember he is a dog with the strongest nose of all breeds. 10x more powerful than a human nose. I admit he drives me insane sometimes with what I catch him doing. Then I remember he is not only a puppy but a bloodhound puppy and believe me that is a distinct difference.
When I catch him counter surfing a loud "No" will have him drop back to the standing position. While I mumble to myself asking if I made the right decision in getting a bloodhound puppy I remember all the times Stella pulled fruit off the counter to eat it, she ate the back of my ball cap that was sitting on the kitchen island and all the destruction Sadie did as a puppy.
Bloodhounds are trackers by nature. When they get bored their noses lead them into trouble if inside a house or inside a yard. I can buy all the chew toys and bones I want but it just takes one scent for him to lock into that can change my day just like that. Luckily that fence is installed and keeps him inside the yard or he would be long gone tracking down an animal he has seen on the other side of the fence. None of them have tried to dig under the fence. Their heads no long fit between the vertical rods of aluminum. So they are safe when left outside.
Here are some photos from this morning of their early morning playing session in 30° weather. 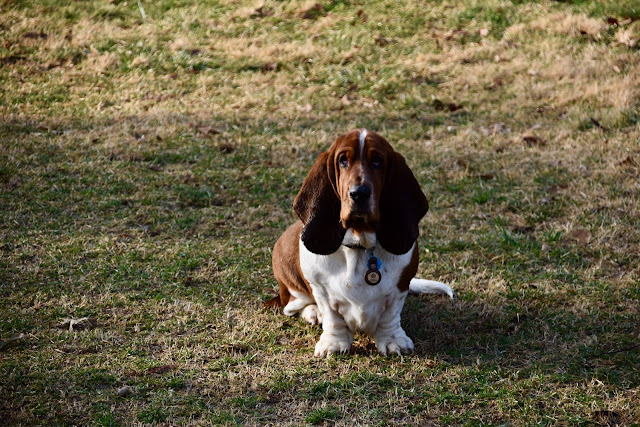 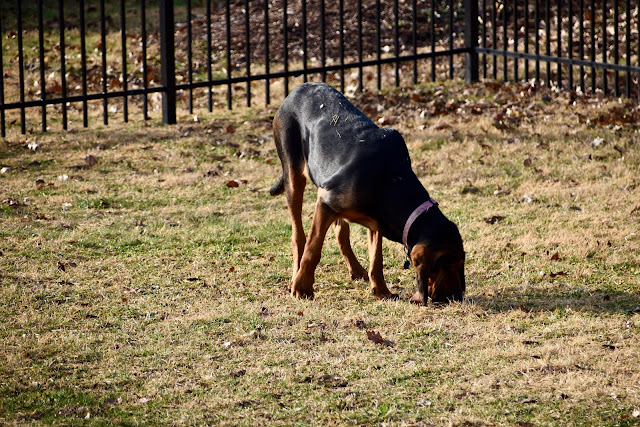 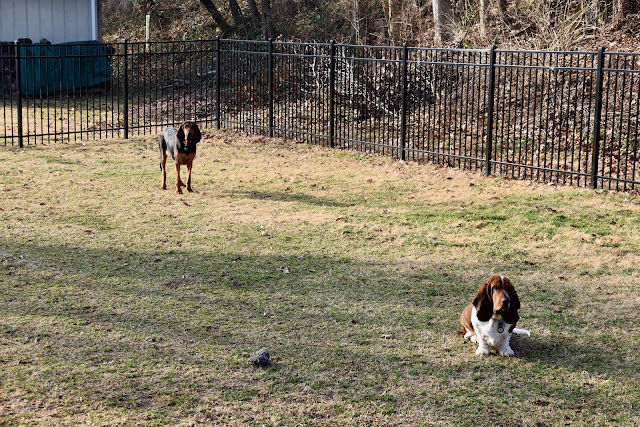 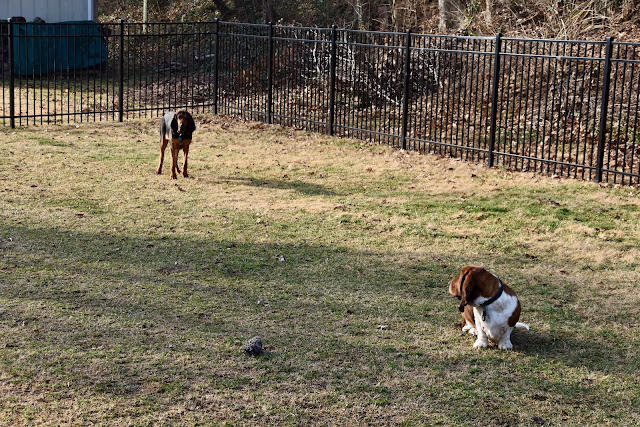 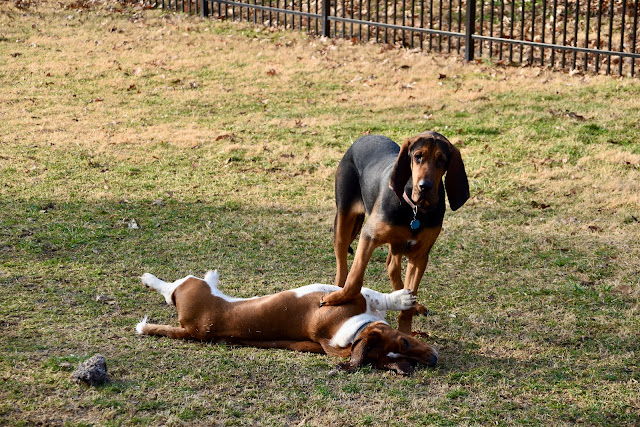 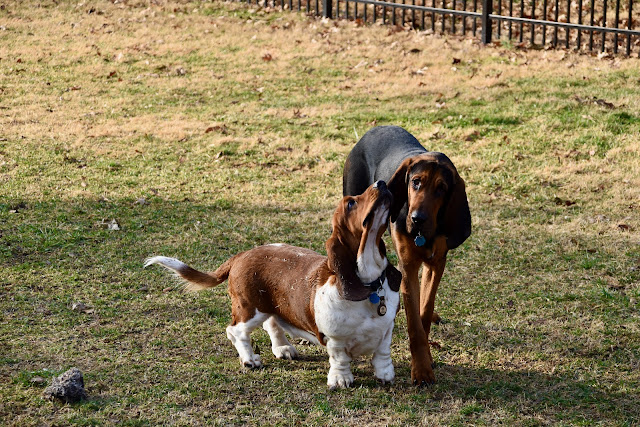 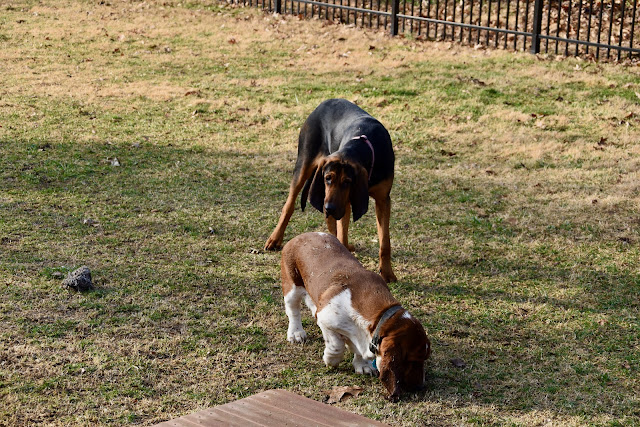 I just have to remember he is a bloodhound puppy doing exactly what I thought he might do. He is trainable and has alleviated some issues as I reward him with small treats. You just can never stop training him until he is older. Taking him on more walks is helping and I have that big field behind my house that is frozen hard right now so no mud and plenty of room for him to exercise his nose. He is so strong that I cannot hold a camera in one hand to take a good photo. 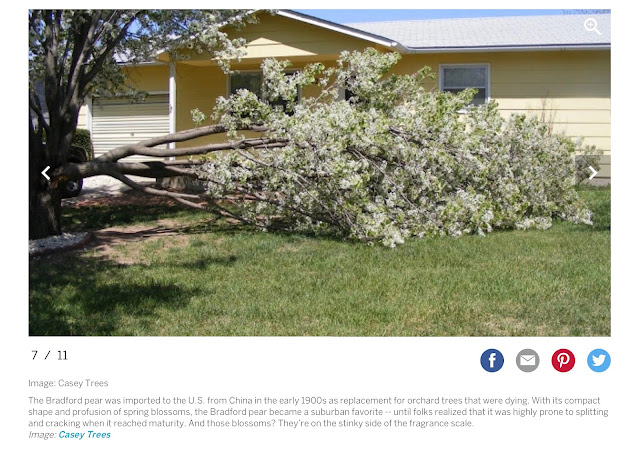