I made a change from 720 to 1080 on the video settings. I have no idea how this loads on a tablet or phone, so if the larger file is a problem for you to see this video make a comment below and I will reload I deleted the 1080 video and reloaded the smaller 720 before I published this post. the short 15 second video of them playing on a day when it was 72° in the month of December. In fact it was that warm on Christmas Day but past blog posts show it was also that warm in Southern Indiana on Christmas Day in 2017. 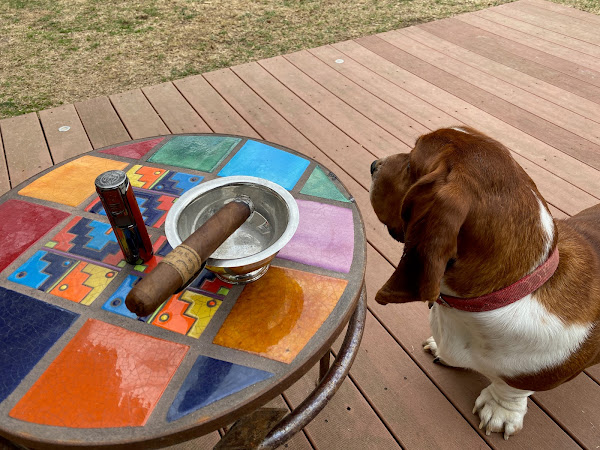 That called for some celebration of sitting out on the patio with an early New Year's cigar to celebrate the great weather and to keep an eye on Henry and Watson, hoping to prevent them from their new hobby of chewing small clumps of green grass that are still left in the doormat backyard. 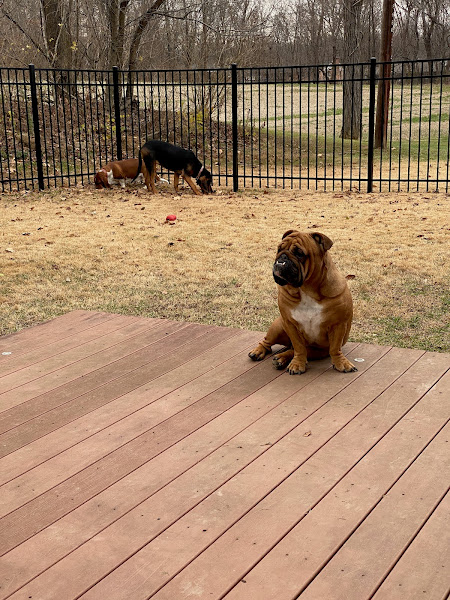 That "tan stuff" is Bermuda grass looking normal in the winter months. I am not a fan of Bermuda grass but the yard is full of it but does not cover all of the yard. IF I had someway to control the hounds and the dog for a month or more I would have the whole yard plowed up and reseeded with Kentucky Bluegrass.
Walter is spending more time outside for some reason, even when the temps are in the 20s as they are right now at 7:56am. He also goes out first thing in the morning which is a new routine for him. I am not sure how long that will last but right now with all three going outside first thing in the morning instead of their own schedule makes it much easier for me to start my day half asleep. 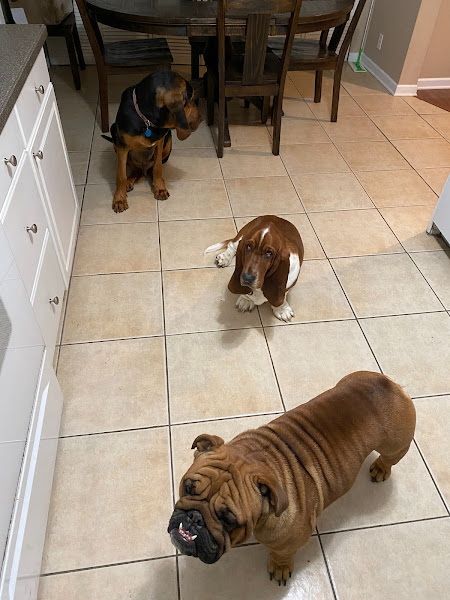 I have no idea how people can train their dogs to stay out of the kitchen when they are cooking. If you know the answer, let me know in the comments section. They live on kibble, expensive kibble, but still think they will get some of my food that is being cooked. They don't get their wish when it comes to my food. 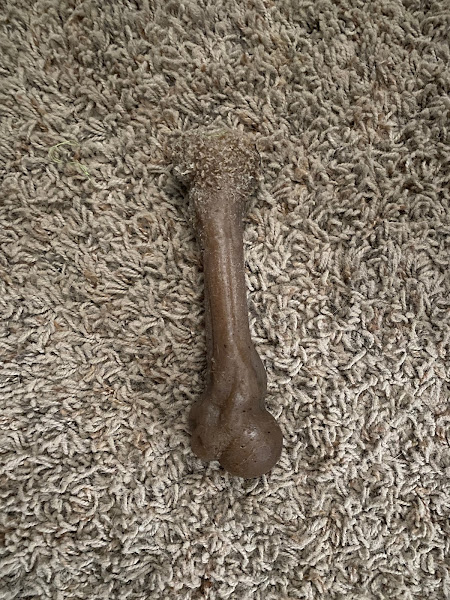 One of the best bones for a bloodhound puppy. That will last forever, or close to it. 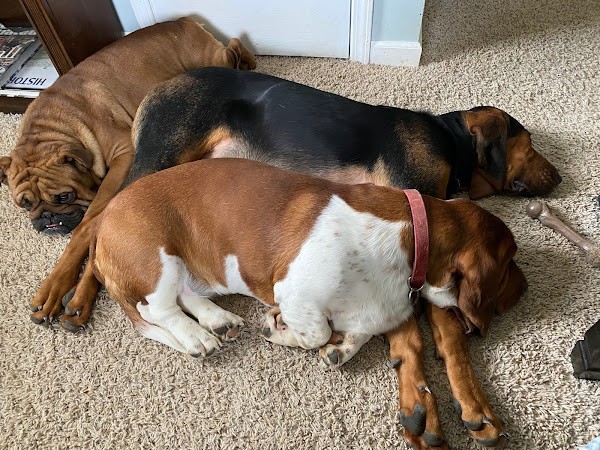 As you can see not much has changed in the early morning routine while I am drinking coffee and reading the internet. I still use Flipboard for what I want to read. 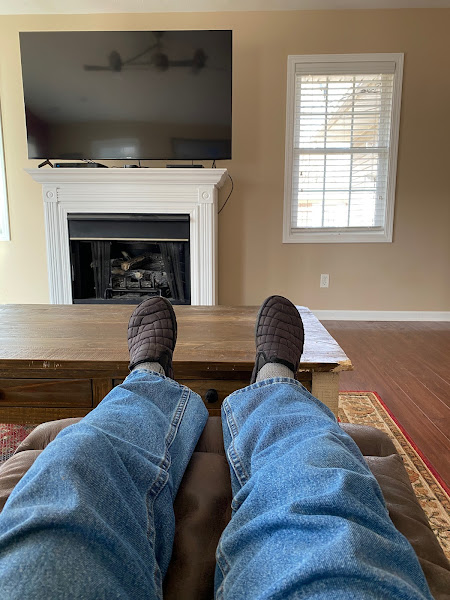 I have been doing a lot of this lately. A lot of good reading throughout the day. You will notice the chewed corners of my new table. I am not thrilled about that but that is what happens I guess when you trust a puppy more than you should as they play early morning, in the dark, while I am in the computer room drinking coffee. The top of it is also kept clear of any flower pots, tv remotes, etc ... because Watson is a professional counter surfer and he does not care if it is food or something not edible. 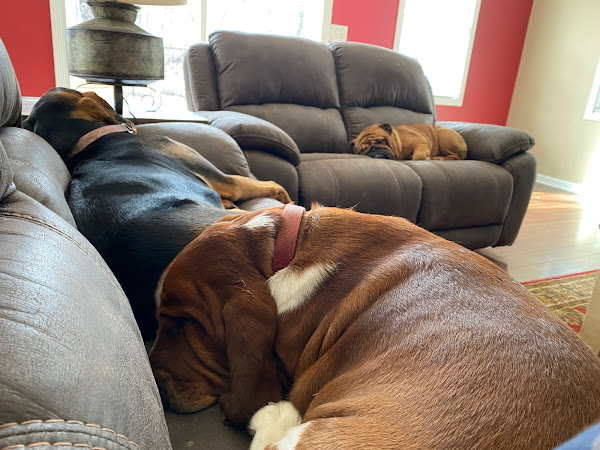 They sleep while I read. 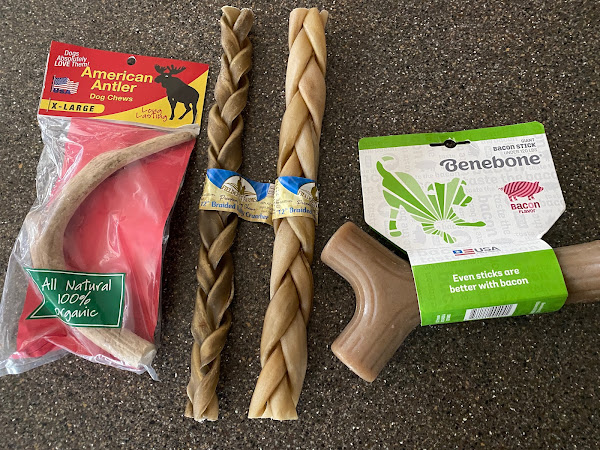 For the first time in the history of me living with hounds ... I have three that like deer antlers. The Benebone is another one like I showed above and Watson claimed that as soon as I cut the cardboard off of it. The chews in the middle were cut into shorter pieces and lasted less than 30 minutes between the two hounds and the dog. Although, Walter did take longer to finish his portion plus he wanted the door closed for privacy while he ate his. They are NON rawhide. 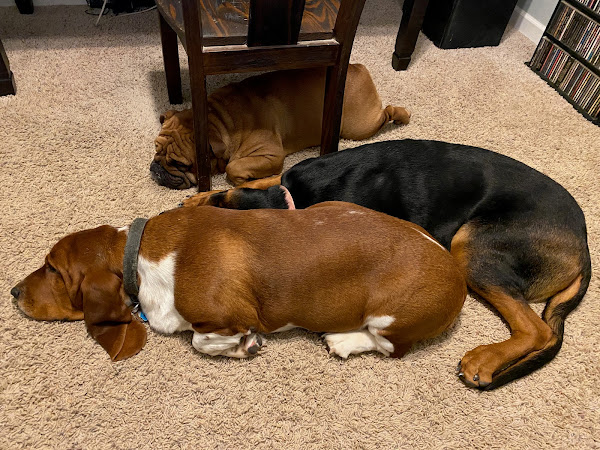 Where I go they go. 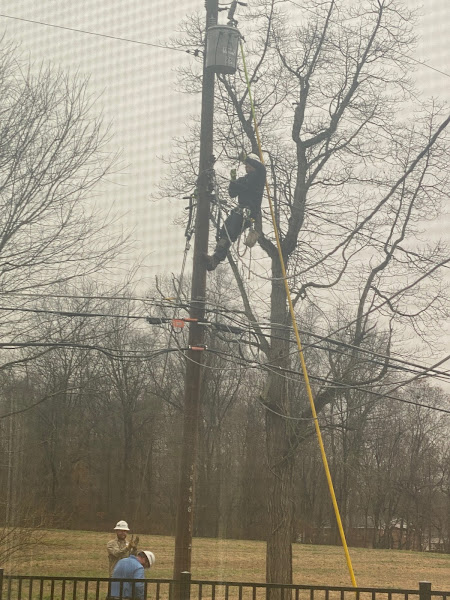 A knock on the front door early last Friday morning, I was told I'd lose power for about 30 minutes while they did some repairs. I guess my neighbor had been losing power completely off and on. I had noticed my lights would flicker recently but I never lost power. If you remember last month, I had trees fall across those three power lines that connect at that pole. I guess there had to be some damage from that tree falling across the lines.
I watched with interest and learned just how that power is turned off to the house for them to work. That long yellow pole was used to "turn off the light switch" and is connected to that part of wire it pulled down from the shape above the transformer that looks like this [
He unhooked the spices to the lines to my house. Just like you would strip wire and cut to new wire for your stereo speakers, he did the same only on a large scale. When he was cutting the damaged section of the wire connected to the transformer, it fell to the ground with insulation that looked like it had melted. He then cut and cleaned the end of that wire along with the wires that go to my house.
He twisted them together just like you would speaker wire, wrapped them with insulation, climbed down the pole with all his tools. Once everyone was clear, another tried balancing that long flexible pole just in the right position to push the "light switch" upward to connect the top and bottom of that [
Once that happened I had power back on in my house. 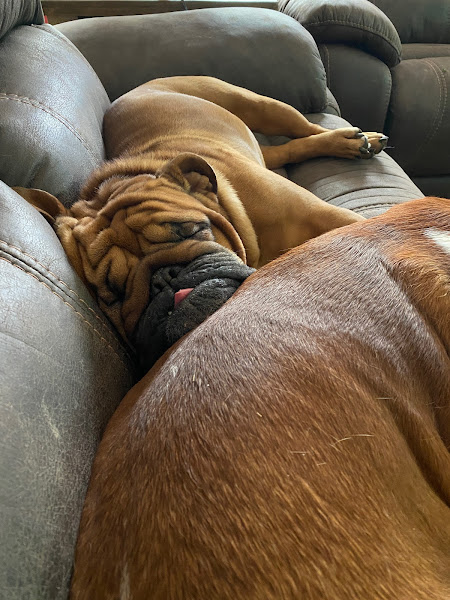 New Year's Eve was uneventful. Walter slept and snored through most of it, including two complete football games for the College Football Playoffs. Looking back on past blog posts for the same day/night each year, I saw nothing had really changed. As in past years I stood outside late at night looking at the sky, right before going to bed hours before midnight. Twenty Twenty-Two sounds like something in a Sci-Fi movie. 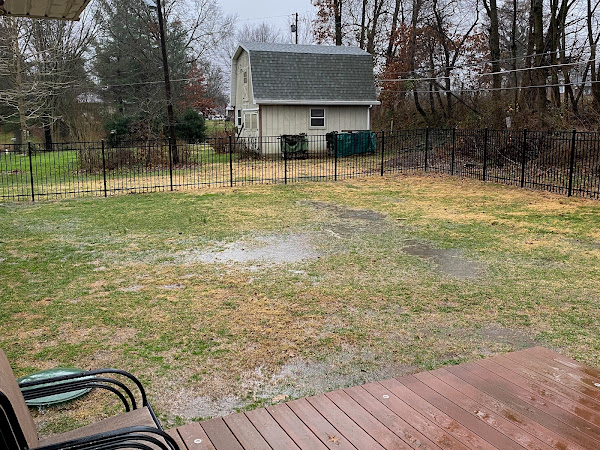 This past Friday night it started raining lightly and never stopped evidently. When I opened the patio door in the dark at 5am Saturday morning all three stood there with the door open and did not take one step outside. I could hear the rain but didn't see my flooded backyard until later, after daybreak. The rain never stopped throughout Saturday and since I have two hounds and a dog that refuse to go out in that ... my only backup here is for them to use the garage. I am willing to clean that floor up instead of somewhere inside my house. After all, you cannot expect them to hold it while they wait hours for the rain to stop. 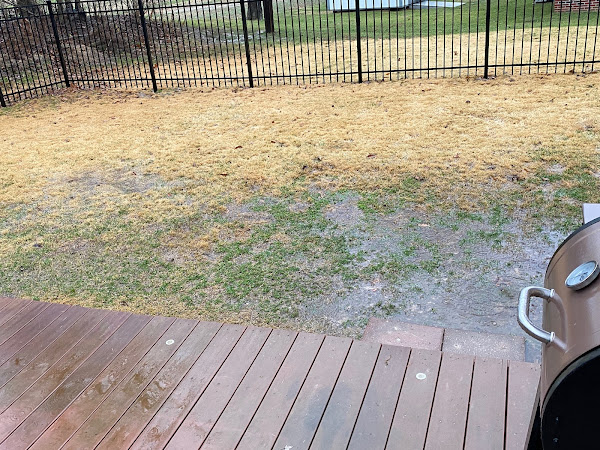 I am not sure what my plan is to prevent this next spring and next winter but something has to be done. Why wasn't it done before? One thing I see though ... that Bermuda grass I don't care for has absorbed a lot of the water and there is no flooding where that grass is. Looking at the yard last fall when mowing leaves, these flooded spots did not look like low spots. The yard looked fairly level. There is a drainage system built around the house I am told by a neighbor that watch them install it years ago. I am guessing I am getting a lot of underground water from the field behind the berm. 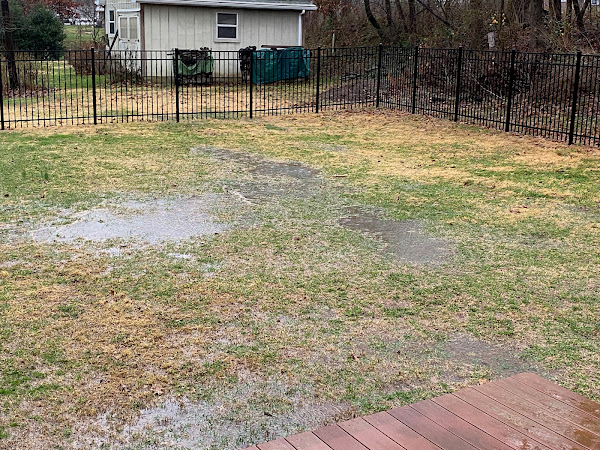