Bones For All The Boys 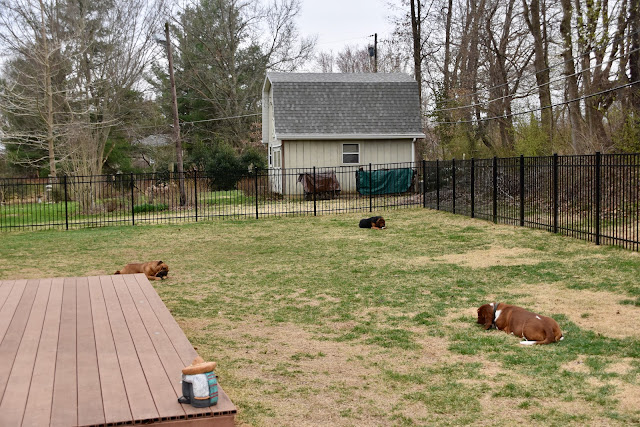 Seeing that the highs were going to be 74° with a lot of sunshine, I had my first lawn day today. It was hot sunshine until about 5pm when the clouds started blowing in from that huge storm on the way in the midwest. We will get that late tonight and it will rain all day tomorrow ... so the hounds and the dog enjoyed their day outside today as did I. Each has a knucklebone to chew, spaced far enough apart to hopefully prevent any fighting. Yes, they do fight if another wants two bones instead of just his. 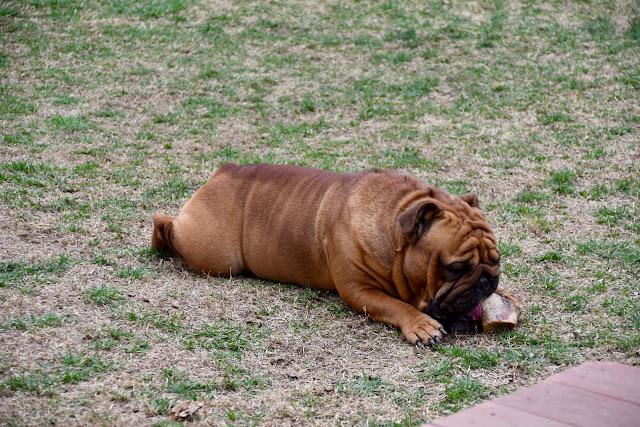 It was actually dog food day this morning and I picked up two new bones thinking that Walter didn't enjoy chewing them. I found out later I was wrong about that. While moving the lava rock outside of the fence to keep Watson from chewing them, (he swallowed one last November when he had surgery) I saw a lump in the dirt and dug up a smaller knucklebone that someone had buried. Walter let Watson spend time getting all the dirt and mud off of it, then he took it over to chew on. 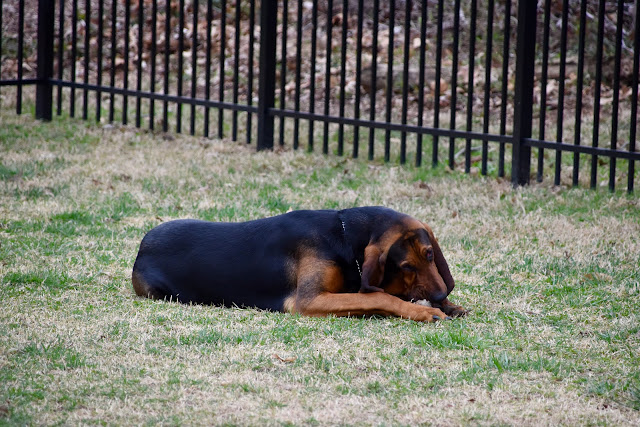 Once the lava rock was moved, I raked what leaves were left after I was finished last fall, inside and outside the fence line. I mowed them along the back and put the others inside the fence in my trash bin. My trash company says they will haul anything away as long as it fits inside the large bin. I just noticed today just how much bigger Watson has gotten the past two weeks. 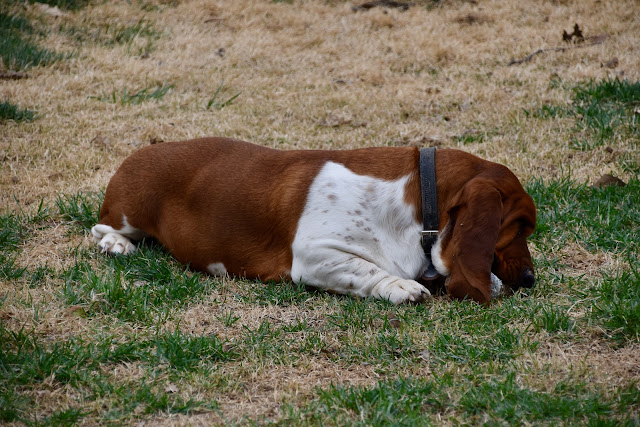 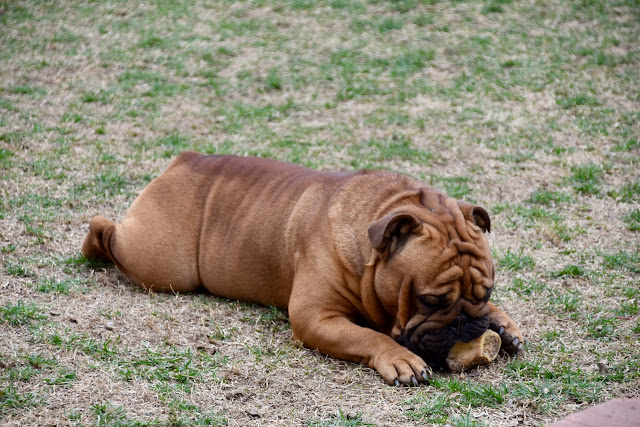 We are suppose to get one to two inches of rain tomorrow and tomorrow night. The rain we got last Thursday was a solid light rain and did a great job of getting the grass started for spring. Most of that dead brown stuff is Bermuda grass mixed in. I think I probably have three to four different kinds of grass in this backyard. 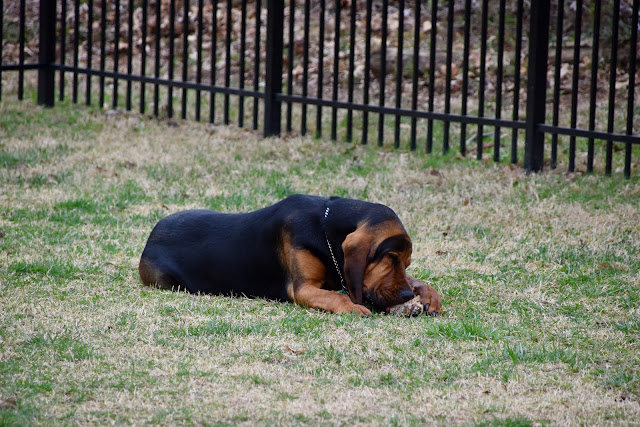 The "BarkBeGone" I spoke of last post continues to work well, EXCEPT WHEN Watson is barking and howling at squirrels. I was thinking today it might be also good to use when he jumps on me or other people when they come to visit. He does seem to stop everything when I push the button. If I say "come on", he will run to the patio door to come inside. Not sure why but I will take that welcomed change. 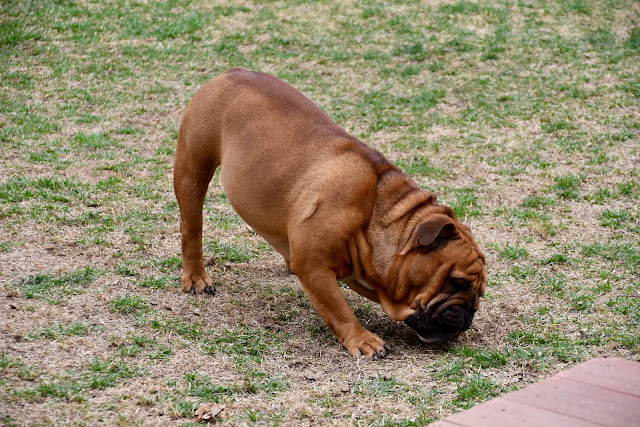 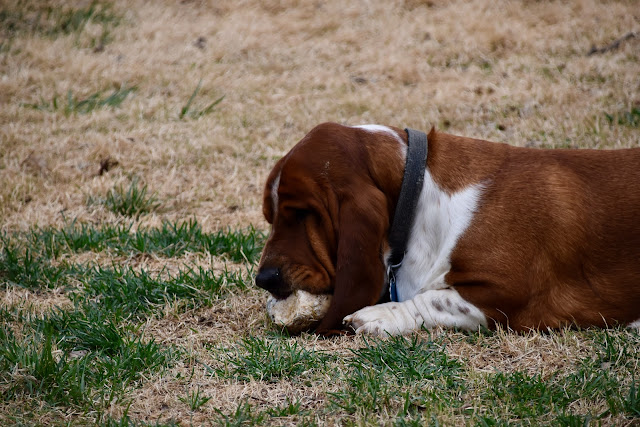 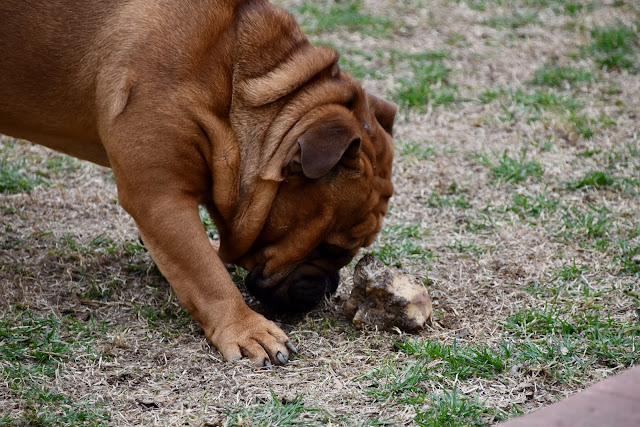 Walter always has to smell everything before he licks it or eats it, even when that might be extra kibble as a treat. 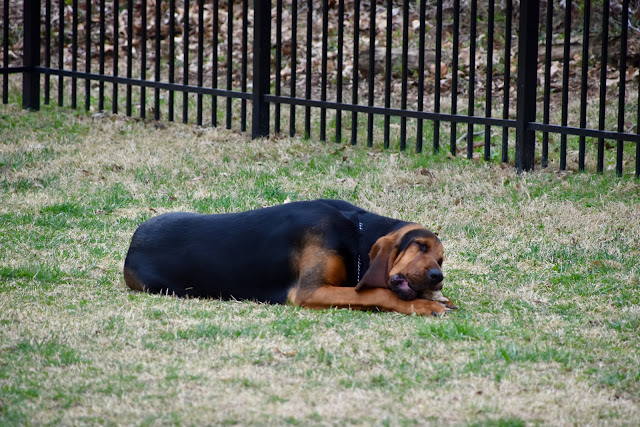 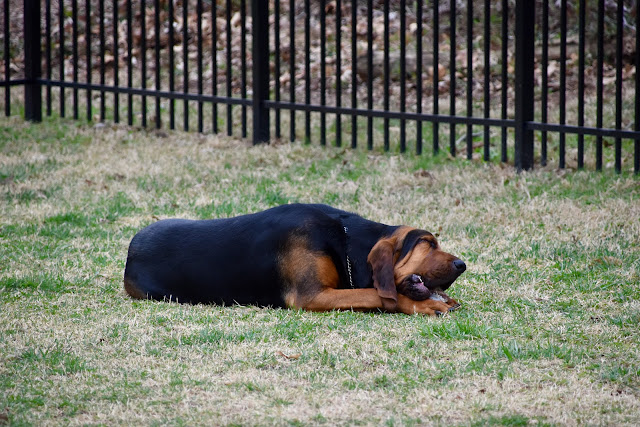 It looks like at the rate they are chewing these bones, they will be back on the Benebones by tomorrow because the bones bought today will be almost be gone if they are still around. 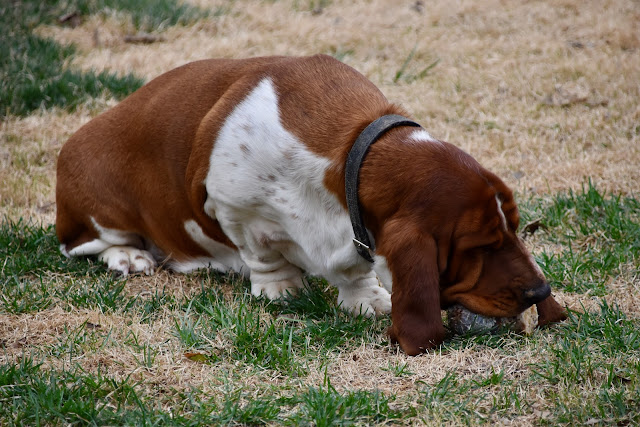 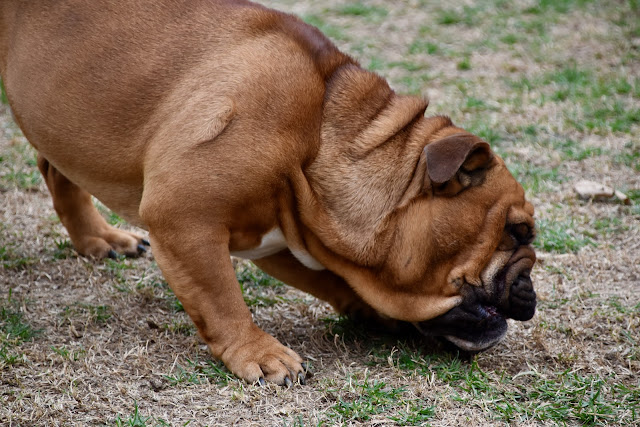 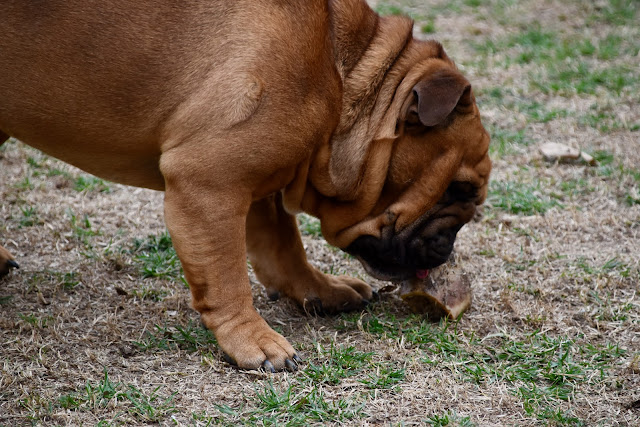 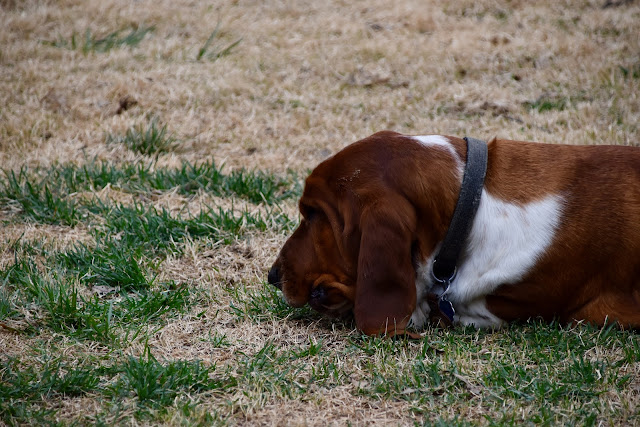 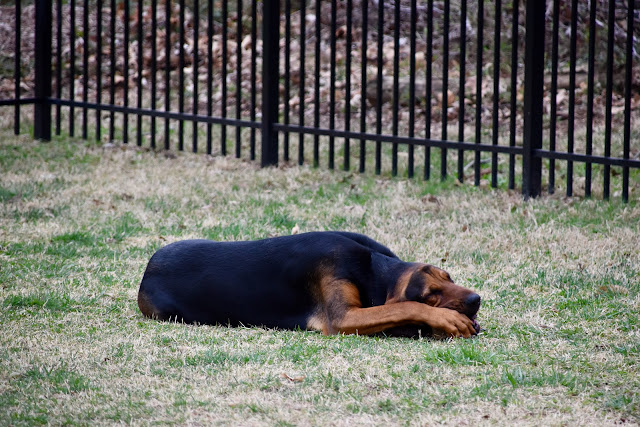 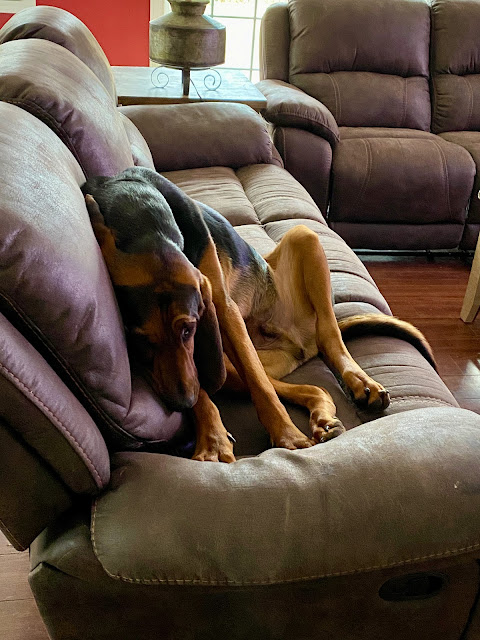 "March Madness" had some great college basketball games this weekend but you could not tell how exciting they were when looking at the hounds. Yes, Watson was sleeping in that position for a while. 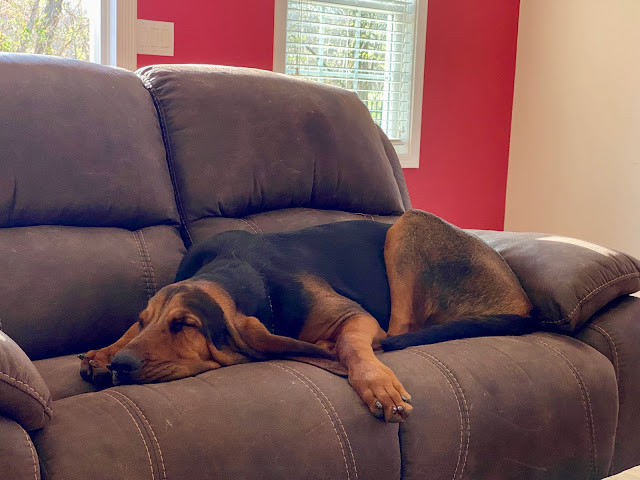 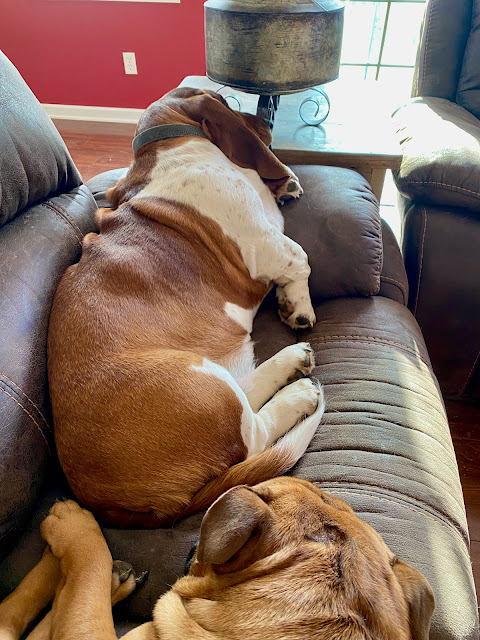 Henry finds the end table is a pretty good pillow. 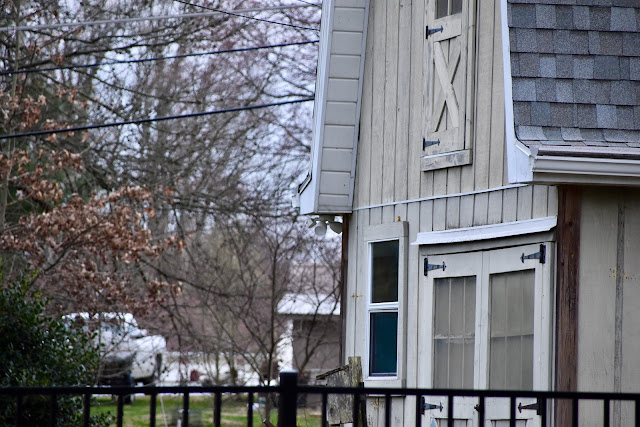 Since I was taking all the outdoor photos with my Nikon today and the 18mm-200mm lens, I thought I would zoom in on the LED lights from my seat on the patio. You may notice that one is pointed directly at my patio door. Luckily after our last discussion last September around 10pm in a light rain, those lights have never come back on. She does have a dusk to dawn security light mounted high on the utility pole to the left of the photos and that lights up her backyard along with the side yard on the other side of the house.
Not much planned this week since I got the lava rocks moved, the last of the leaves raked along the fence line and holes filled with new dirt throughout the yard. I will wait a few weeks until it is warmer all the time to reseed about half of the backyard to the left of center when looking out toward the fence.
Gas prices when down a few days ago. I am paying $3.99 for 87 regular where as my old friend up in Northern California is paying $5.86 for 87 regular. How many people know they are selling us fuel that was produced and drummed over a year ago. It's not like we are putting freshly produced gas in our cars.
Well I better go, I seem to have acquired a huge urge for some cheeseburgers from Freddy's Steakburgers.
It was a nice day today in "the tropics" of Southern Indiana.
at March 21, 2022