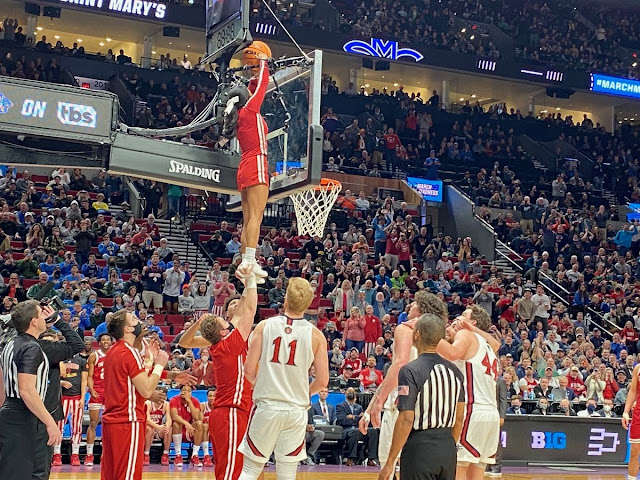 As my team was being "taken to the woodshed" as some say, in last nights March Madness game in Portland .. the hounds, me, my texting friends and IU fans scattered all over the USA didn't have a lot to cheer about. That was until a shot by Trayce Jackson-Davis bounced off the rim, up and over the bankboard, landing on top of the goal structure full of braces, the shot clock and tv cameras.

St. Mary's 6'10" center (#11) surely had the solution as the referee handed him a mop with a long handle. Those mops are held by guys that mop up sweat off the floor at the direction of the referee at times. Keeping the court dry will prevent injuries due to player slipping. Yet, with mop in hand, extended as far as possible, he couldn't reach the ball.

The dumbest move and one I couldn't believe was what the shorter referee was going to try ... he stood on a folding chair using the same mop handle and not even coming close to the ball. It was laughable at best but what do you do expect from a referee that has a tendency, nationwide of making stupid calls and are accused at times of being blind?

College cheerleaders from all the schools practice this move so it is second nature to them. Indiana's two cheerleaders went into action without even being asked by the referee. They said in interviews after the game that they practice this move every Tuesday (the basket move). She said she wasn't afraid of being that high when the tv announcer asked her during the break in the action. The goal is 10' high, so that gives you some idea just how high she was to grab the ball and drop it to the floor. 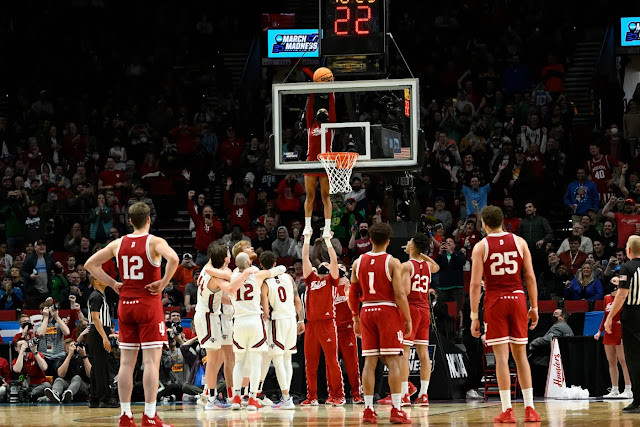 Needless to say, she or they had the loudest cheer heard during the whole game. They will live in infamy now and will most likely be shown every year when they play the annual college basketball tournament, as a highlight to past games. 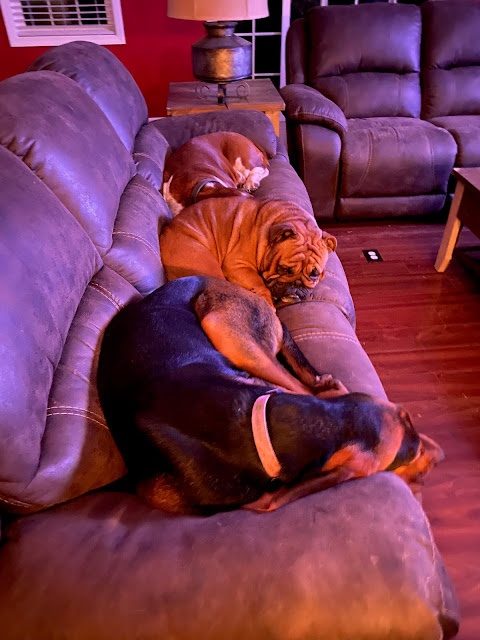 That loud roar from the fans at the game coming through the tv, didn't even compute to the sleeping hounds and the dog. 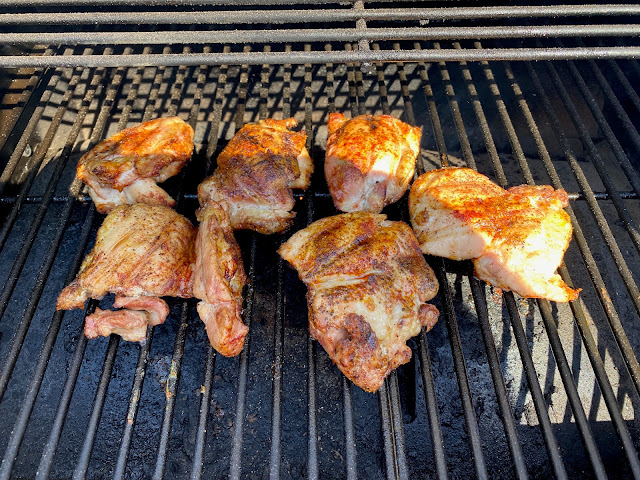 It might have been snowing this time last week, but in 72° weather on Wednesday it was time to pull the pellet grill away from the house and cook some chicken thighs. 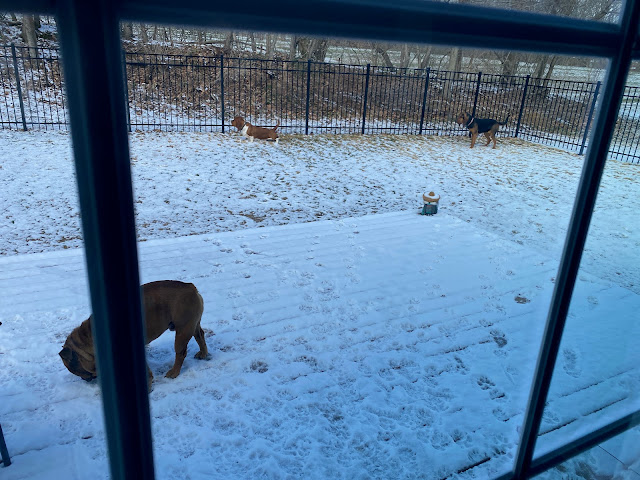 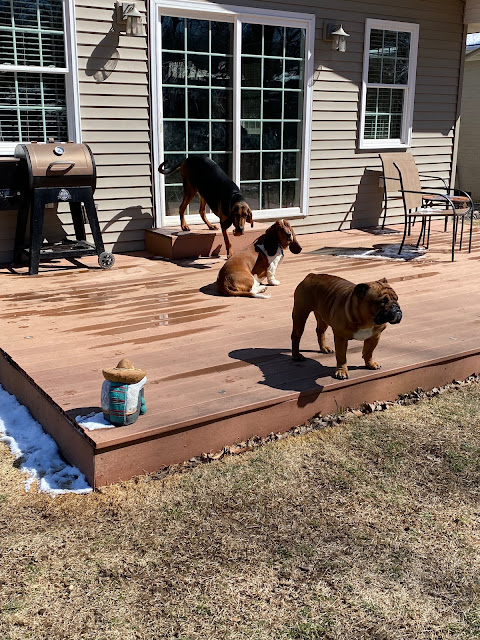 When it snowed last week I decided I'd let the warm temps on Saturday do my snow shoveling for me. It really wasn't that warm of a temperature, 30s, but the sun was hot enough to clear off the deck and the yard of the snow from the previous day. 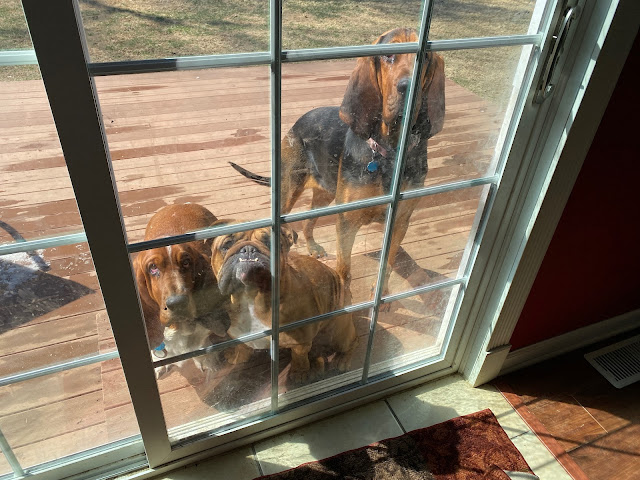 Yes it was sunny but cold .. and besides it was 1:30pm local time and that means lunch to these three. They never let me lose track of time. 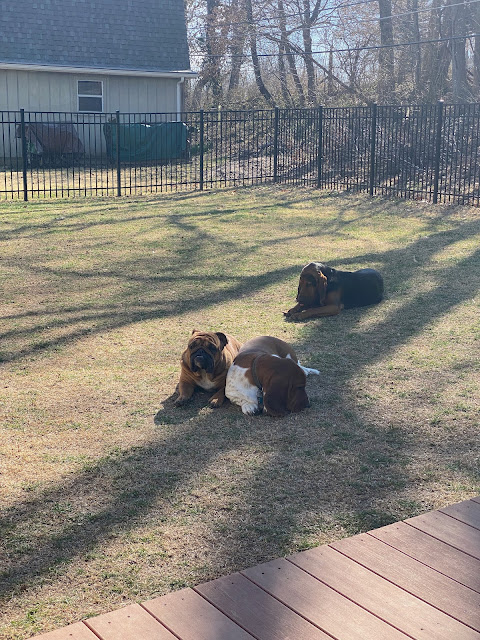 With the Spring type weather this past week, the hounds, the dog and I spent most of our time outside. 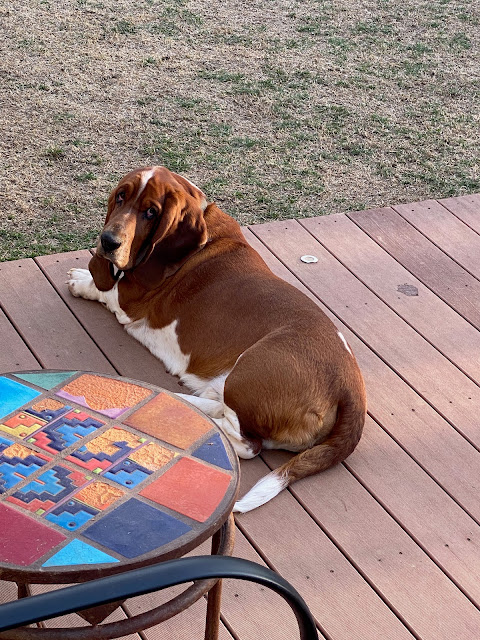 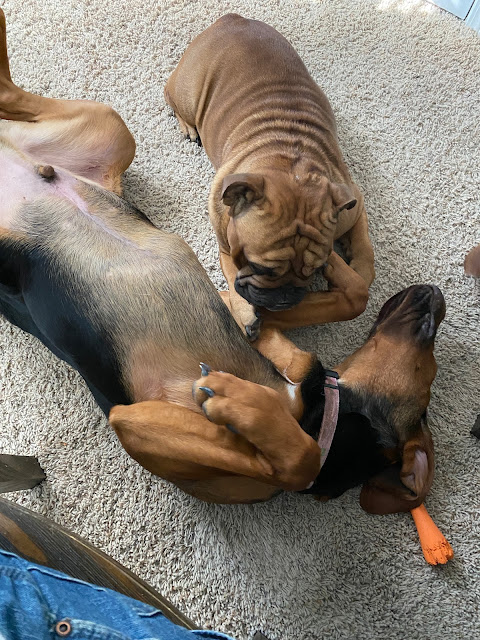 With all the running and chasing each other in the yard, there is always time to catch up on their rest. 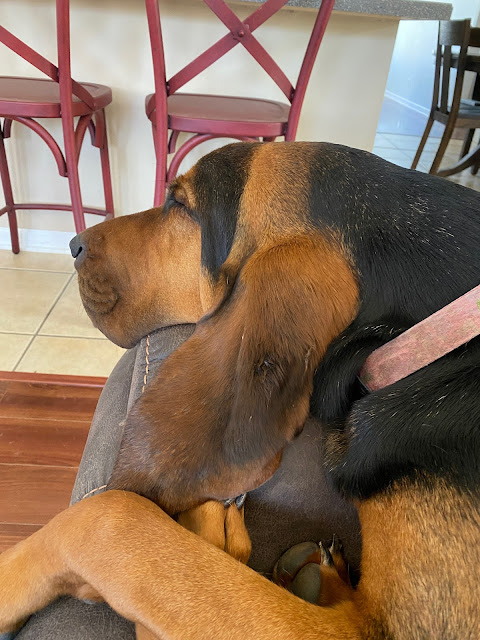 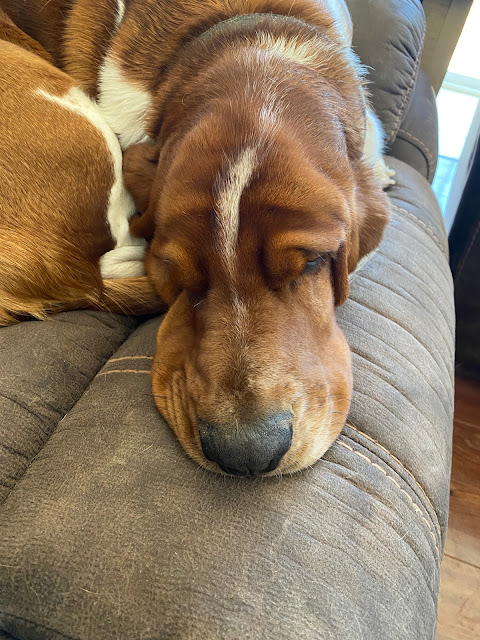 For those wondering in case you are looking for dog proof couch, A damp cloth takes all the dried drool, dirt, stains and whatever off of the couch and returns it back to the way it was when I bought it new last May. 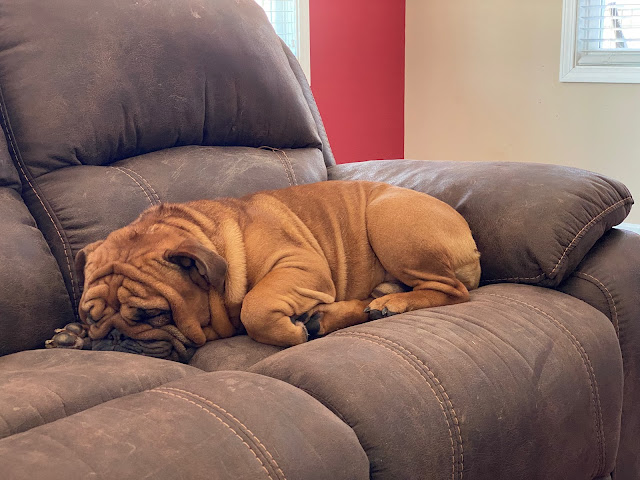 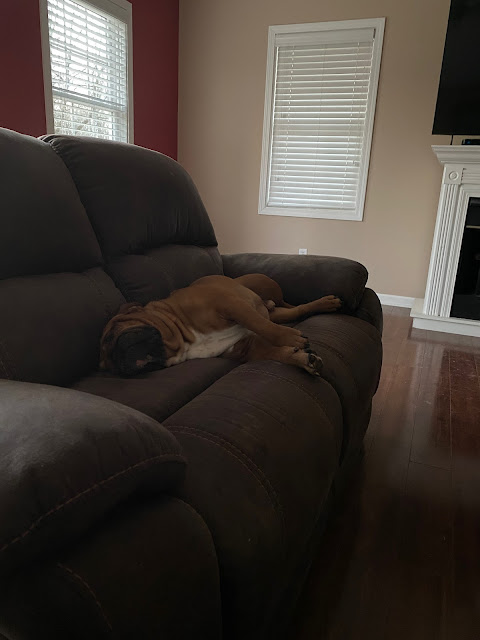 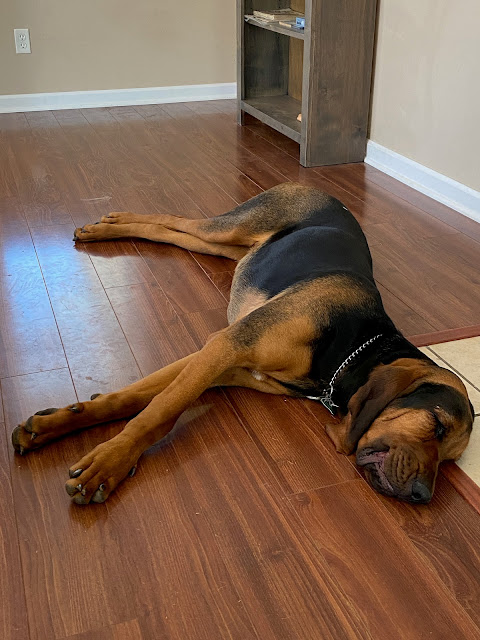 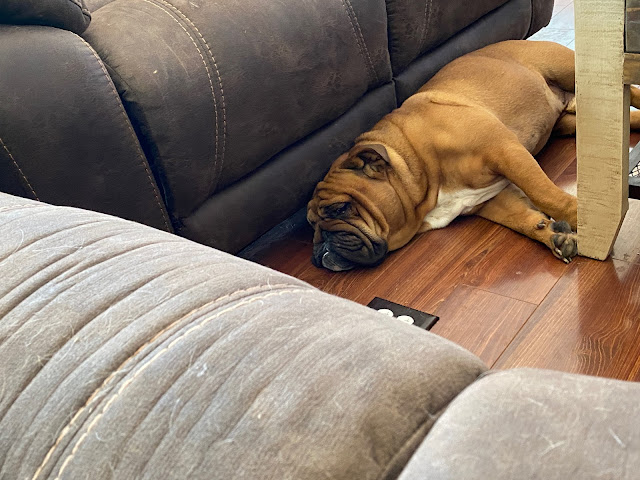 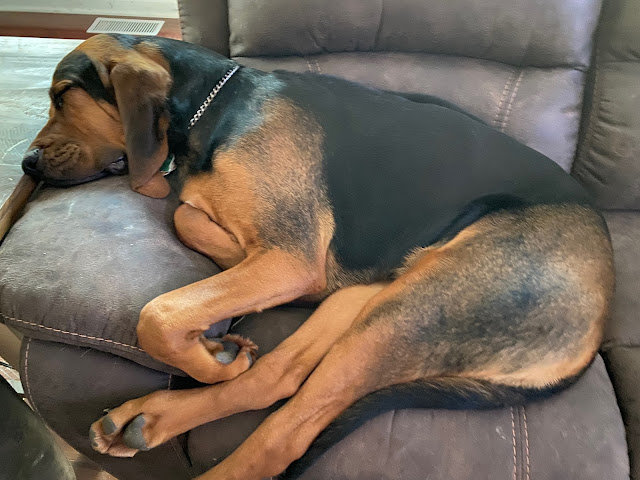 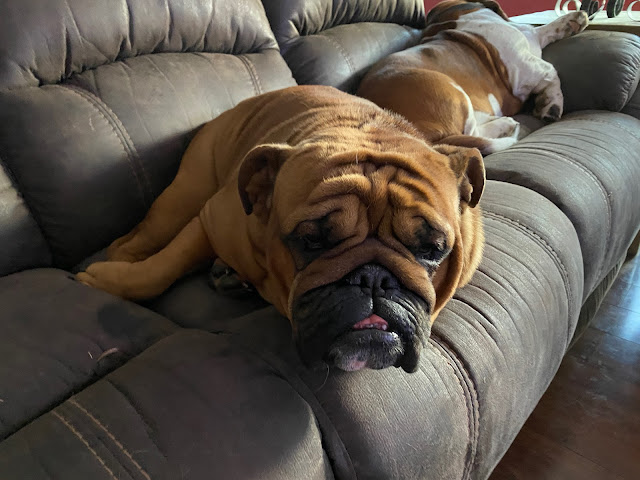 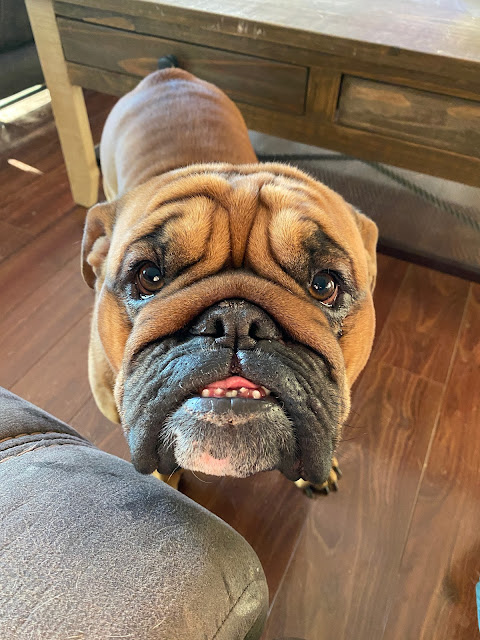 Walter was asking me yesterday when would our game start and were we going to spend all afternoon and all night watching basketball games. 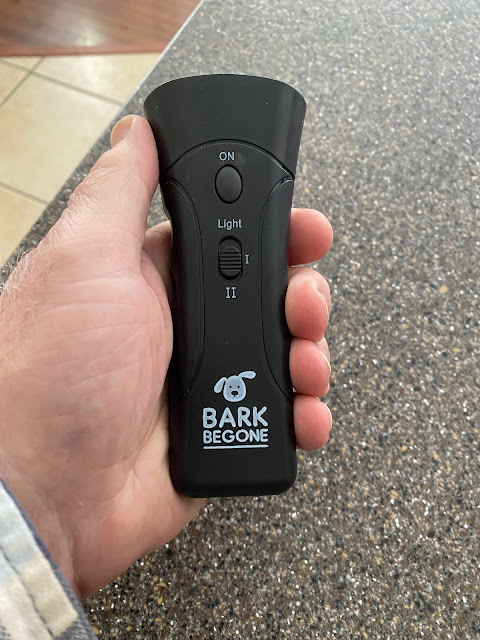 With Watson baying, howling and barking any time he sees the neighbors outside on each side of me, it was testing my patience. The neighbors I apologized to plus a few dog walkers, just laughed and said they loved hearing Watson. He can be heard at least three houses away and probably further. He IS the loudest bloodhound I have ever owned. I still didn't like having other people have to put up with his loud barking.

A friend sent me a link about this tool here and with a 30 day money back guarantee I decided why not? It wasn't soon after it arrived in the mail that all three are at the fence. The neighbors to the left of me, with the LED lights, had come out to enjoy the good weather, fill up their bird feeders and pick up some sticks in the yard. Walter started barking, Watson was baying and barking ... so it was the perfect time to see if this thing worked.

I stood at the patio door, pointed it in their direction and pressed the "on" button. With a sound that only they could hear, all three perked their ears up and turned to look at me at the same time. Only Watson and Walter were barking, and they stopped immediately. As instructed, I gave them some positive feedback.

Over the course of two days ... it worked every time. It had one bad day but yesterday something amazing happened. Again the older neighbor with her caretaker came outside to enjoy the weather .... Watson trotted over to the fence like he always does ... sat down, watched them and never barked !!!! The daily afternoon dog walkers passed by the house and Watson sat and watched them without a sound. I hold up that 'gun' to where he sees it now, and he will come running to me on the patio.

A bicycle friend down in the Sierra Vista - Hereford area, took these photos the other day on his ride. This wall is just south of Highway 92 in the area of the Coronado National Park. The gates were closed and locked about the time Biden took over office in January 2020. This material for the new wall has been sitting here since then. I have been told, he has put the Aerostat back up in the air on a regular basis after he shut that down in 2020. He has let them rebuild and reopen the two highway checkpoints north of Huachuca City and Tombstone. I hear he has also permitted some of the wall to be completed in Texas ... why not in Cochise County Arizona? Here's your tax dollars at work.

Well with thunderstorms predicted for this afternoon, The hounds, the dog and I will stay inside and watch the basketball marathon even though our team is out of the tournament. We love college basketball that much. I would like to say that Spring is here with the warmer temps but I know all too well that a blizzard can come out of nowhere this time of year. Once I get out of March I will reseed the backyard and that strip of yard out by the street that didn't do well last summer.

Overall things are good here in "the tropics' of Southern Indiana.