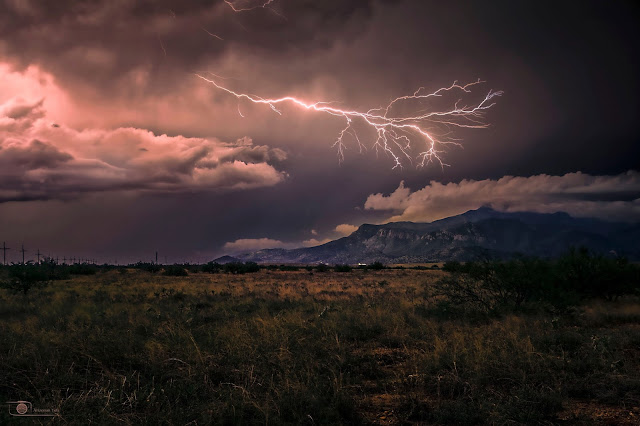 We have had a lot of rain lately here in "the tropics" of southern Indiana but so has Sierra Vista AZ. I miss those open sky light shows I use to see over the Huachuca Mts and the Mule Mts to the left. A Facebook photographer took this the other day. You can see his name in the lower left corner, Arizonan Yeti.

When it's not raining here, it has been hot and muggy, a typical summer in Indiana. I try to squeeze in the yard mowing in between rains which at times is not a lot of time to finish. With it hot the hounds, dog and I have been camping out inside most of the time enjoying the cold air conditioned air. So not a lot of blogable events to write about and just a few photos. 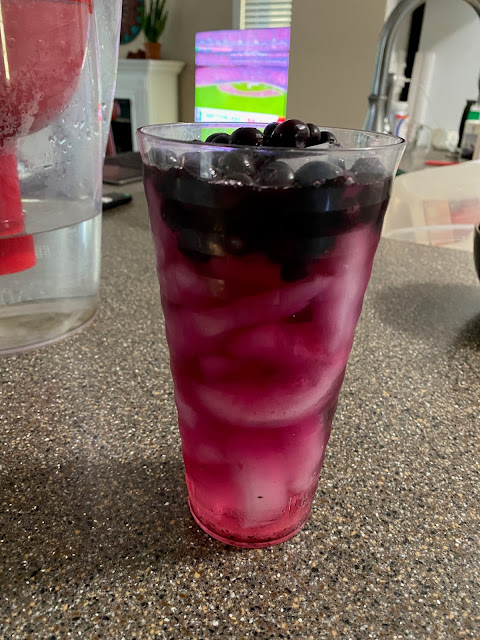 As I try to escape sweet ice tea with caffeine in the hot weather, I have switched to ice water with blueberries on top. It doesn't matter if the berries are fresh or frozen, they still do the same thing. Just enough flavor, good nutrients and no sugar needed. Other berries can be used. 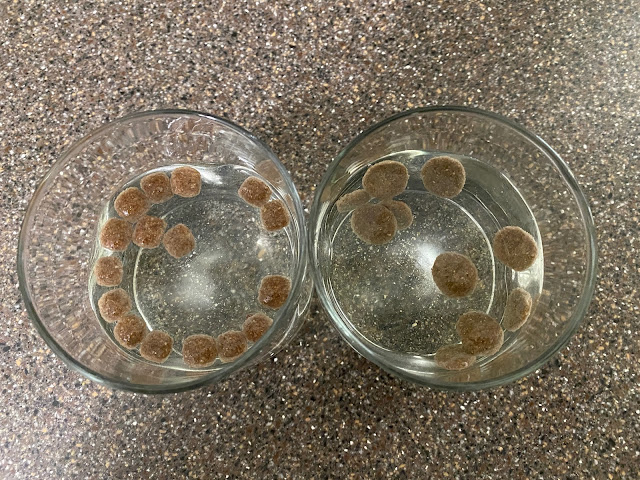 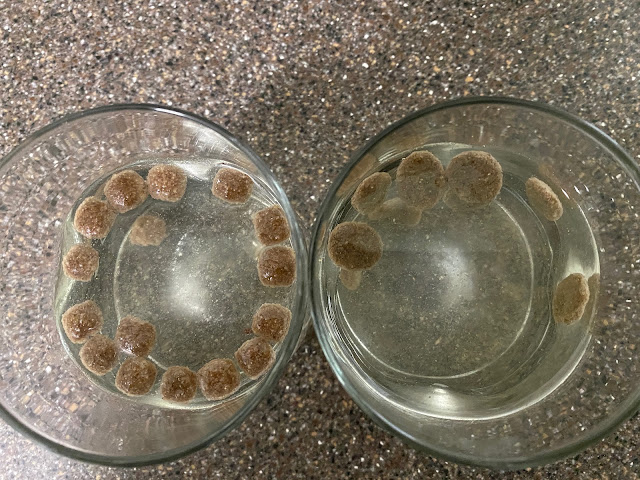 The dog food experiment with Watson continued. Some blog readers, online friends, in person friends, suggested soaking his water before feeding him. I do that now for both of his meals. I did not see any difference with his digestive problem by adding a cup of warm water to his kibble but I did see a difference when I switched his food to Kirkland Salmon and Sweet Potato, a Costco brand. I used their food many years ago and currently it is the food for all three of them.

Those photos are a test to see if the two different dog foods I was feeding at the time would swell up after soaking them. Years ago kibble use to double in size after a short time in water but not the new stuff. A small increase in size but nothing like years ago. Top photo is the start, bottom photo is after 30 minutes. After shopping at Costco for dog food and a few other items, friends that received this photo did not think I had the trunk space to haul what I had bought. 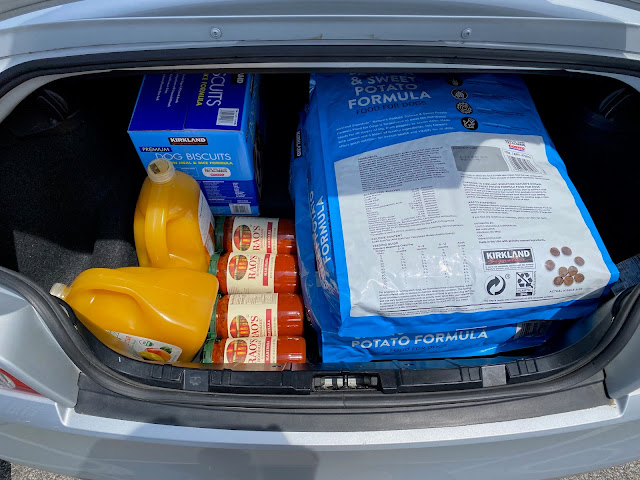 I knew from past experience when I had a different Z4 and a wagon of food instead of a shopping cart full of food, that I had plenty of room in the trunk even with the top down. I always liked their big box of dog biscuits. 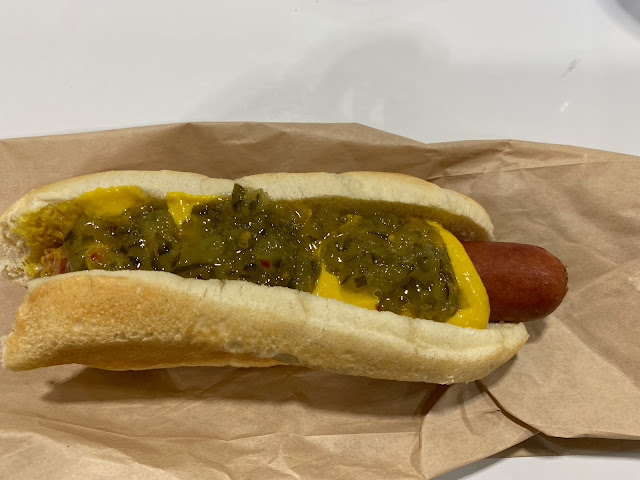 Of course you cannot leave Costco after you check out and pass by the best deal in the nation. Not only a good tasting hotdog at the Costco cafe area but one I can afford for $1.50 Ballparks don't have one as good as this. 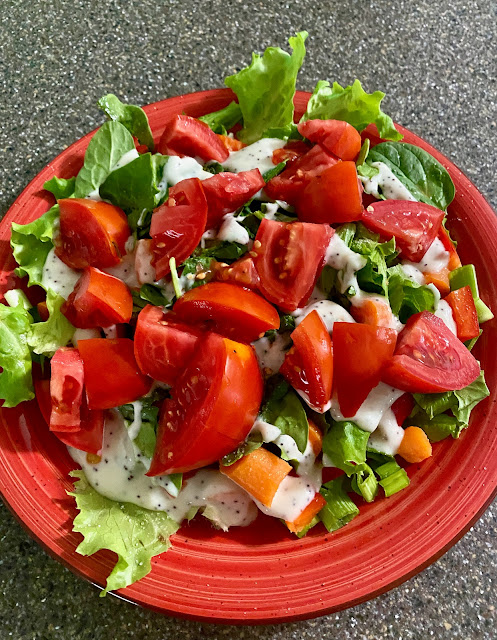 Don't be fooled by the hotdog lunch. That is only when I go to Costco and I don't go that often. So other times I do eat fairly healthy but I have noticed this summer my menu is more of snacking throughout the day instead of normal meals. I track my nutritional macros with Chronometer so I can tell how much protein, fat and carbs I am eating daily plus can see the food that is causing high percentages of those categories. A friend has given me the ingredients and tools to make my own dressing. That jar and wire whip show up today from Amazon. I will buy the ingredients after they arrive. 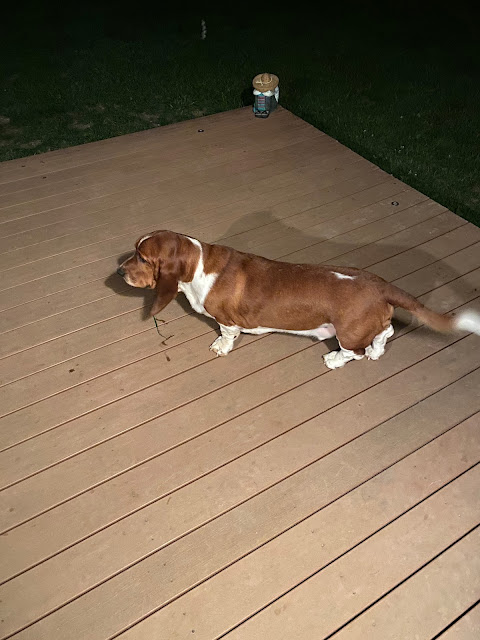 With the temps cooling off later at night, I will open the patio door so the hounds, not the dog, can go in and out while I watch baseball on tv. Not the dog??? Walter has zero interest in going outside to explore like the hounds do. In fact one time I shut off the lights and locked the patio door to go to bed. I thought Henry was already back in the bedroom as the other two dogs were. When I couldn't find him anywhere in the house, calling his hame, I went back to the patio deck with the light on and saw him laying in the dark yard sleeping. LOL 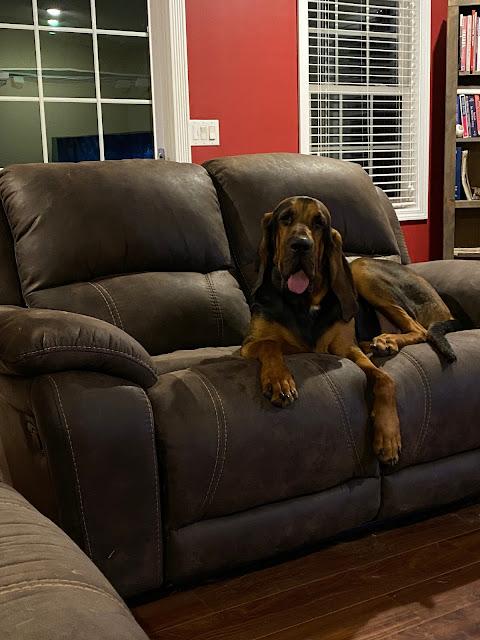 I told Watson when he was a puppy that was his "chair", he still knows that today. When he is walking in front of me or in front of the tv while I am trying to watch a movie or baseball I tell him "get in your chair" and there he goes, right where he should be. 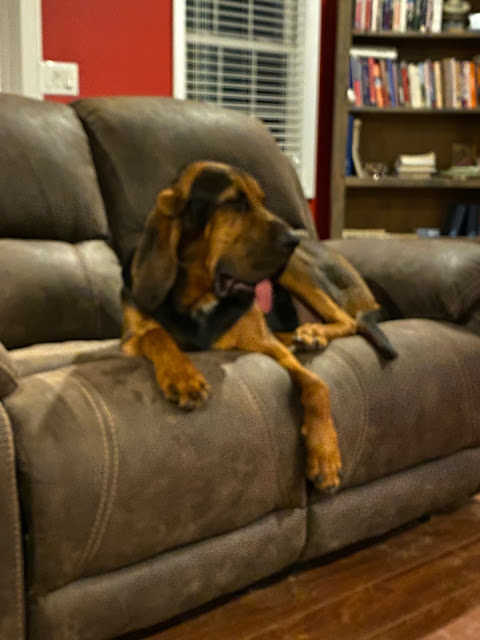 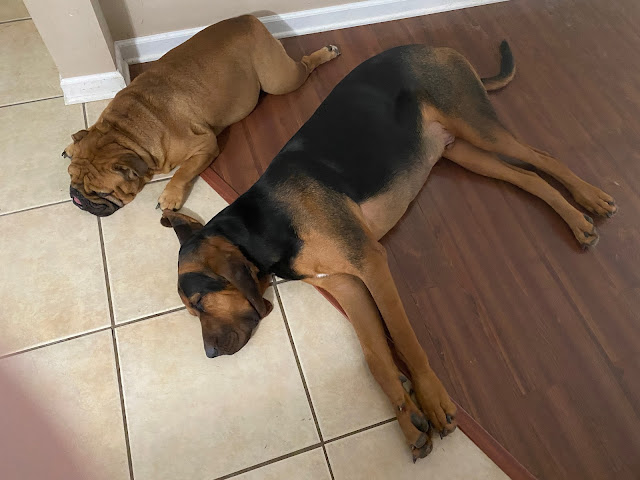 With the floor register blowing cool AC air across the floor, they like to sleep right across from it. That tile gets pretty cold and that is where they spend a lot of their time during the day. 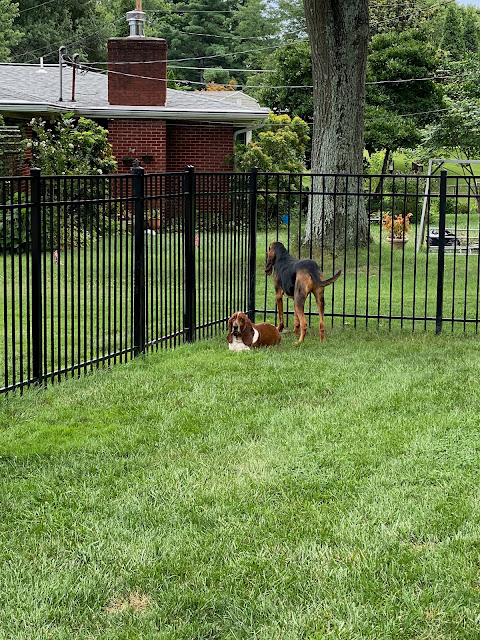 Henry and Watson like to follow me or walk with me as I mow the yard. This year I am cutting the grass taller inside the fence in hopes of keeping that during the winter instead of cutting it too short and causing floods where there was little to no grass. Watson is definitely getting better over the past year of howling and baying when he sees people next door or walking their dogs in the street. He will actually lay in the yard and look at birds, squirrels and people next door without making a sound. 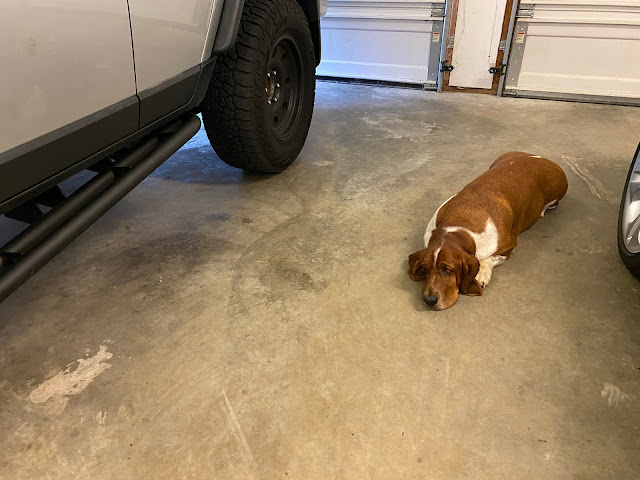 Yesterday Henry and Watson decided to supervise me while I installed some rock rails. After completing the job a few hours later I could not believe I tried to do the same job almost three years ago and only two months after my hip replacement. I wasn't able to finish the job then and had to take that FJ to Toyota to let them do it. The hounds and the dog slept in the hot garage while I did the work yesterday but they wanted to be out there with me. 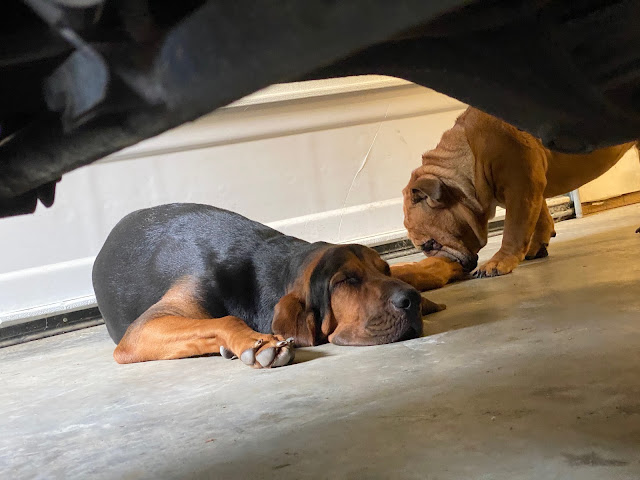 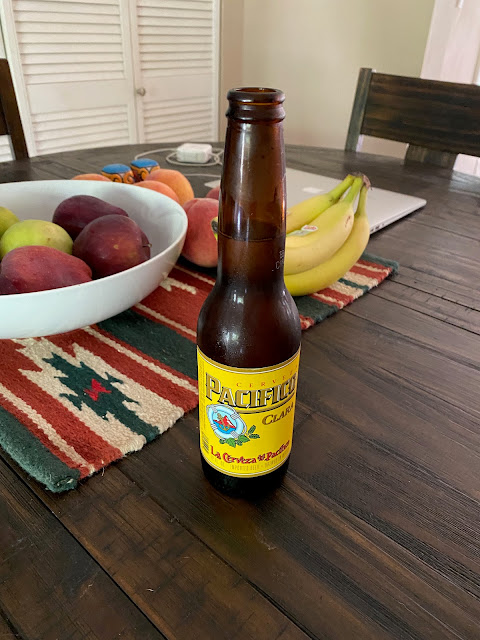 By the time I finished at 5:20pm in a closed garage, it was 80°inside the garage and 90° outside. I was drenched in sweat so I celebrated with my favorite beer for the first time since I moved back to Indiana. I couldn't find this beer anywhere until just a few weeks ago when I saw that Walmart carries it now. 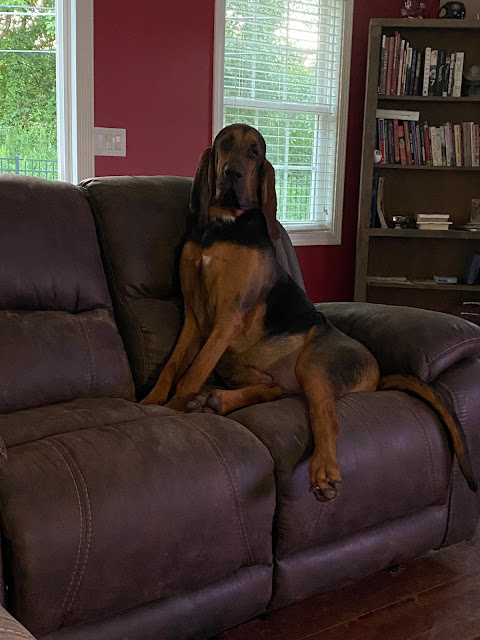 After a day of supervising, Watson was almost ready for his nightly nap on "his chair". 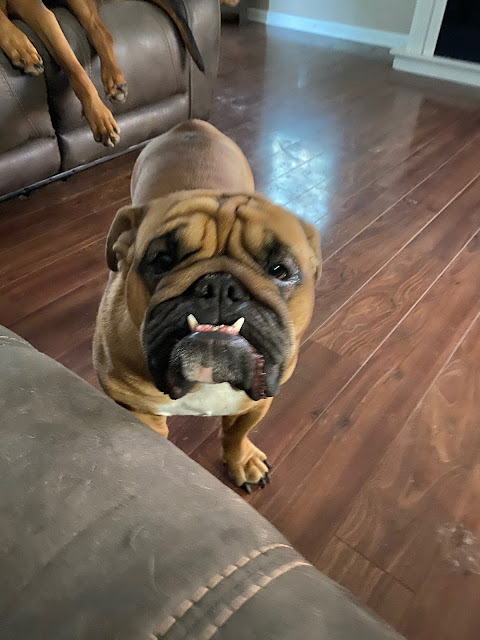 Walter never likes it when I am talking on the phone ... so he will stand there and snort, growl at me until I get off or until I tell him to be quiet. 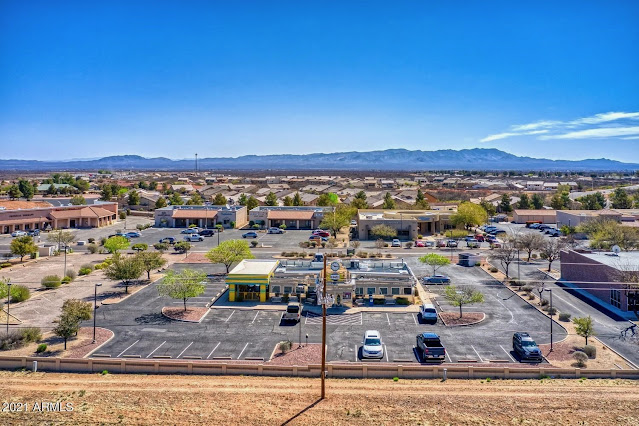 I checked out a realtor website in their commercial section of listings last week to see The Diner or officially Papa's 50's Diner south of Sierra Vista AZ on Hwy 92 is still for sale after 16 months. Restaurant ownership is hard with long hours, one reason this owner wants to finally retire. You will need close to a million dollars to become the new owner. 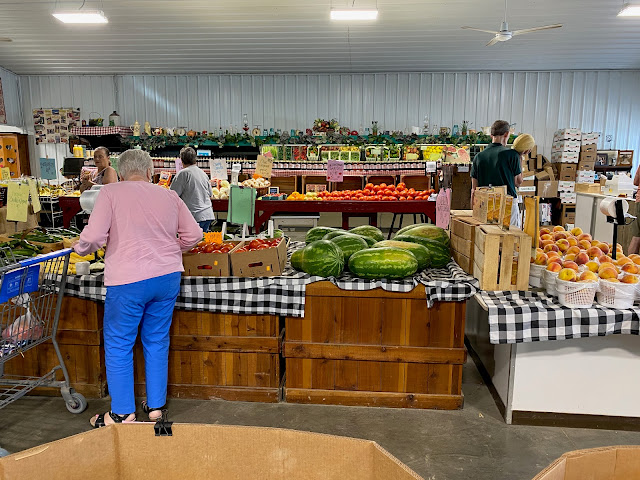 I was complaining to my friends the other day about produce and fruit having no taste when I bought them at the stores. No, I don't have COVID. Plus by the time the fruit was ripe to eat, it had rotted. She suggested I go to Mayse Farmers Market north of town. I found a gold mine about five miles from my house. It will be a place I visit often. On the other side of those tomatoes is their produce section along with a wall full of jams and jellies that go below those jars you see on top.
Behind and to the left of the photo is their bakery with all their homemade breads and pastries. 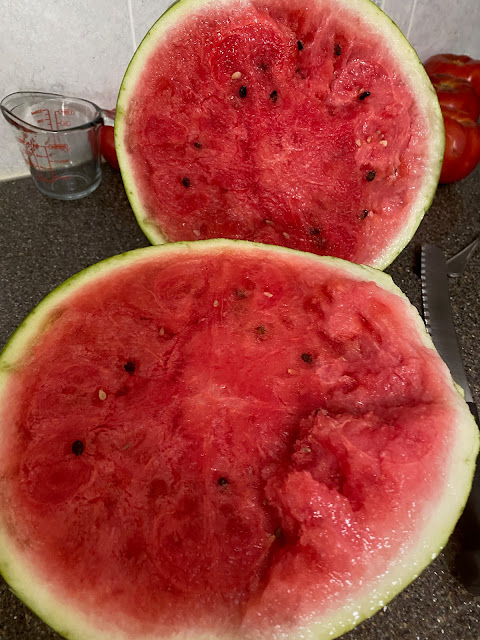 I ended up having the sweetest and juiciest watermelon of the summer and the only fruit I have to wait to get ripe are the large peaches I bought. All the other fruit, veggies were ready to be eaten as soon as they were unpacked and washed.

So that is about it from "the tropics" of Southern Indiana.