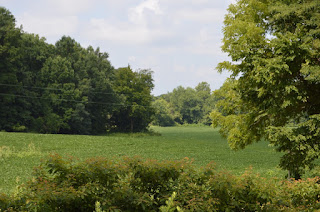 Last night I kept waiting for the heat index to drop below a 100° thinking it might be cool enough to get a hound walk in. Finally just a few minutes before 9pm the heat index had dropped to 95° so I decided to take a chance.

It must have been cool enough because I never did get to the point of sweating during the walk and both hounds finished the walk with energy to spare. With it being close to sun down plus the recent deer sightings along the tree line, I put Stella on the 25' retractable leash. I could not afford to take the chance she would see deer, take off and then have to search for her in the dark. 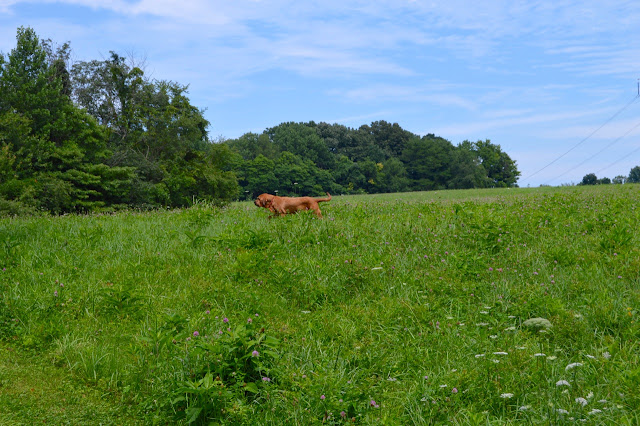 Using the leash turned out to be a great decision. By the time we started I saw two deer standing by the corner where we make our first turn, watching us. Neither Sadie nor Stella saw what was up ahead. As we made that turn to head to the back of the field I see 5 deer standing and watching us near the cornfield. Neither hound saw them but I prepared myself for a sudden sprint by Stella just in case.

The deer eventually took off running but as we walked along the back edge of the field there was one good size deer with antlers standing by the electric power lines tower not aware we were near. I'd say it was 30-40 yards away. Again ... neither hound saw it. They must be losing their touch in flushing out and chasing deer.

So during the walk last night, without a camera, I saw a total of 8-10 deer.

Looking at Wunderground weather today I saw we are just a few days away from dropping the temps back into the 80's. With that is a prediction of a lot of rain a few days in a row but one thing we know from living in Indiana ... if you don't like the weather, wait an hour or so and it will change. 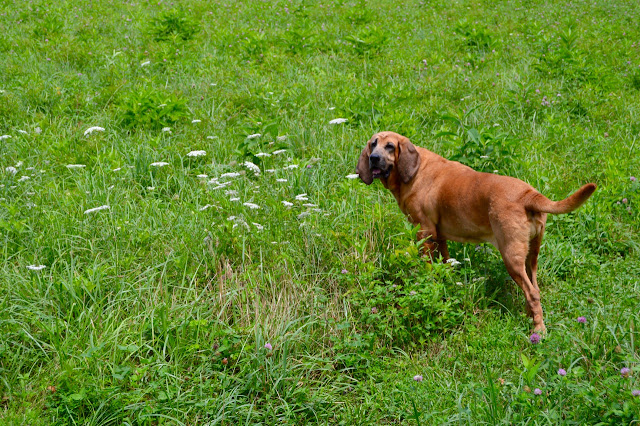 Since the field is starting to grow back I have noticed one disturbing thing, at least to me. There are more of the large leaf "weeds" growing than the nice pure grass and clover like last spring. That tells me they will wait for the winter to kill off the weeds and let next spring bring in the nice grass and clover for them to bale in June.

Anyone know what this stuff is? 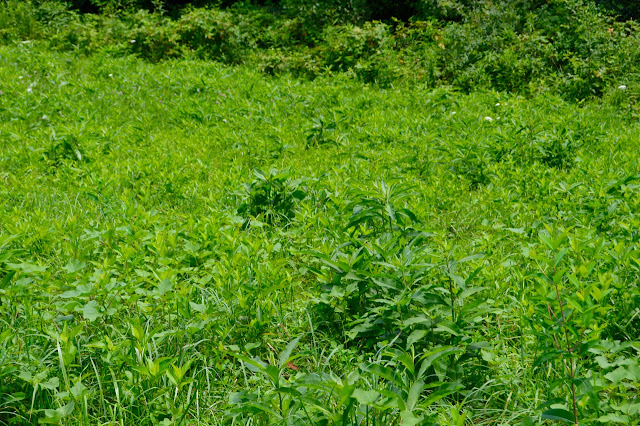 I like hot weather even though it might sound like I am complaining about it. Still it will be a welcomed relief to have the temperatures drop 10° or so and get back to those nights with temps in the 60's. That will also mean two hound walks per day like we were doing before the "heat dome" appeared.

I thought it might be possible today to take a walk around 11:30am but the hounds didn't even venture out of the yard and by the time I took this last photo, they both headed for the house. 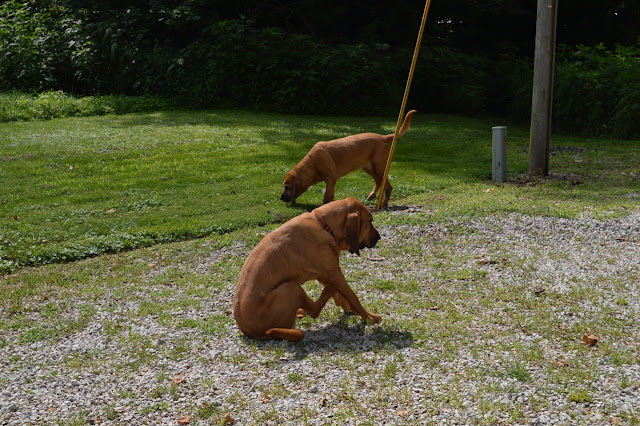 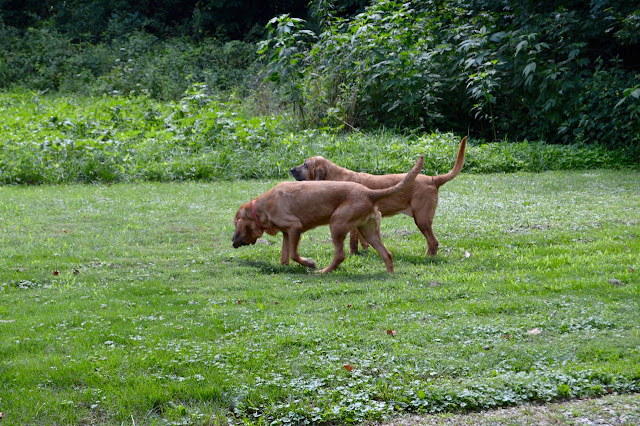 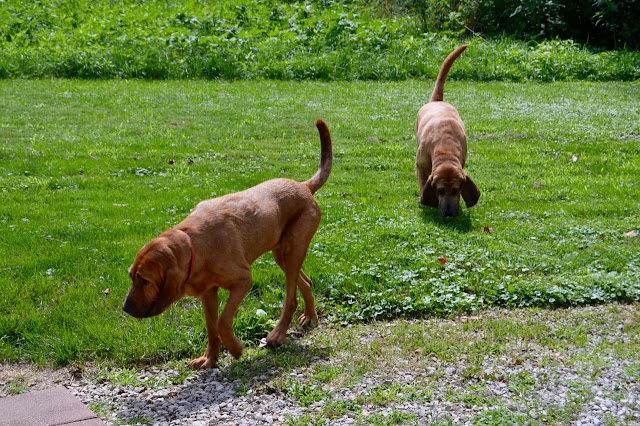 A few hours later Stella wanted to go outside. They had a late lunch today and the routine after lunch is all three of them head out ... even Heidi. I checked and saw the heat index was 108° and it definitely felt like it as I walked outside. The hounds also felt it, as they didn't stay outside longer than 5 minutes. 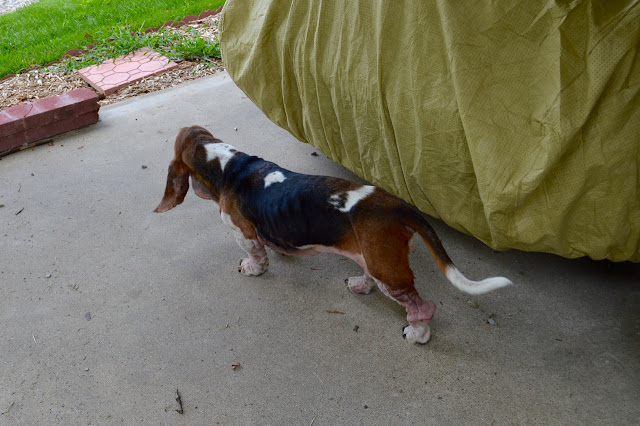 Sadie went no further than this before she turned to go back inside. 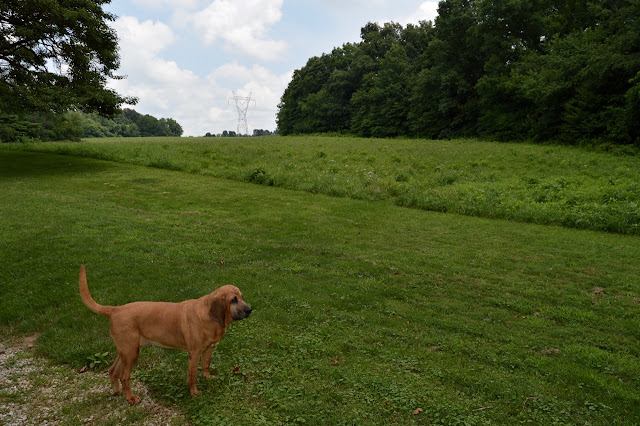 Stella was in deep thought but also turned around and followed Sadie. Within minutes of being inside they were in their favorite places to sleep ... I think it's safe to say "the heat dome" has zapped their energy the past week or so. 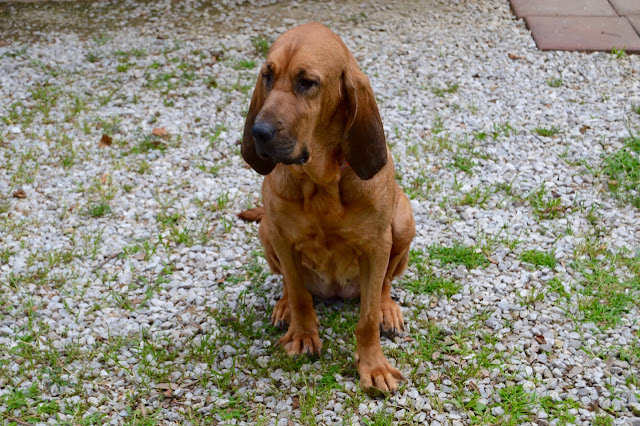 I see the leafy weeds are trying to overtake my backyard. The front yard is not nearly as bad. It's a close fight between them and the yard moles for the backyard territory. I am very tempted to use some Scott's weed killer and lawn food but I know I can't keep the hounds off the yard for the recommended 24 hours for the chemicals to soak in. I am always hesitant in using that although the warning labels say it's safe for pets.

By the time we got back from our walk tonight it was a little after 7pm. The hounds survived okay, both off leash, no deer sightings, but it was much warmer at 91° and a heat index of 115°. I did not know those temp readings until we got back to the house. 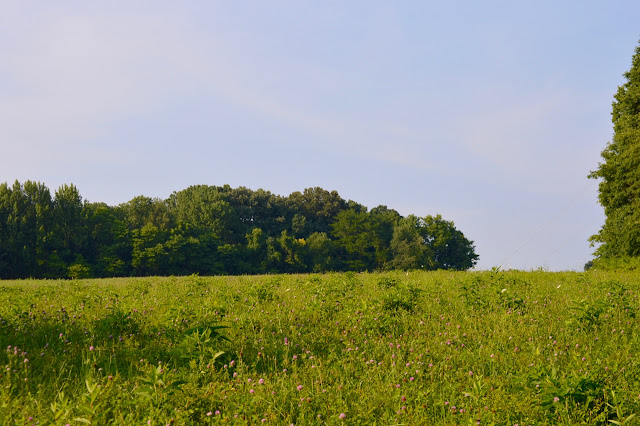 Both hounds didn't see a problem taking the walk earlier than we had the past week. They were happy to be out since 'cabin fever' has set in for them. 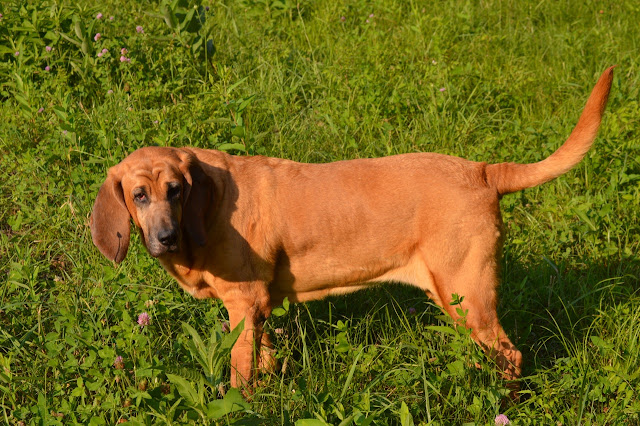 With little chance of seeing deer this time of night I decided to let Stella back off leach ... she got her running in early. 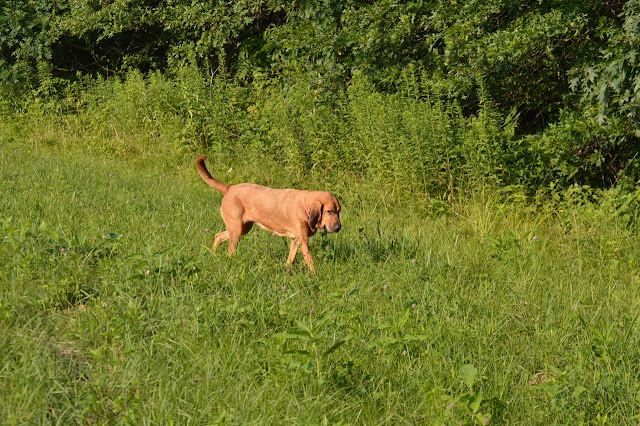 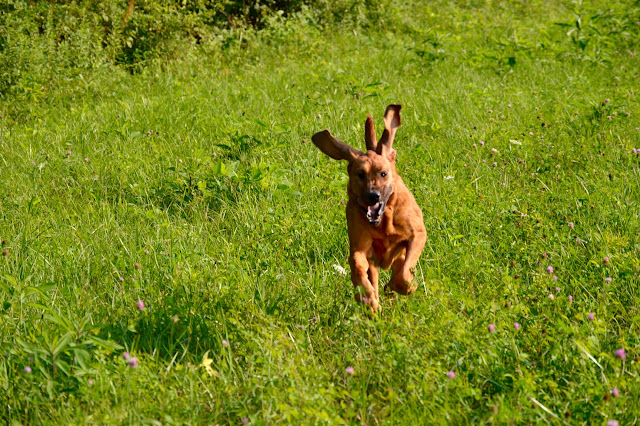 The infamous 1st corner where we make that first turn every walk but lately this area has been a favorite place for deer around 9pm or sunset. 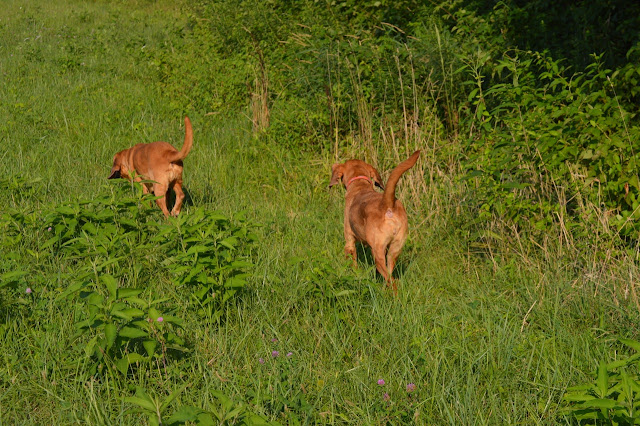 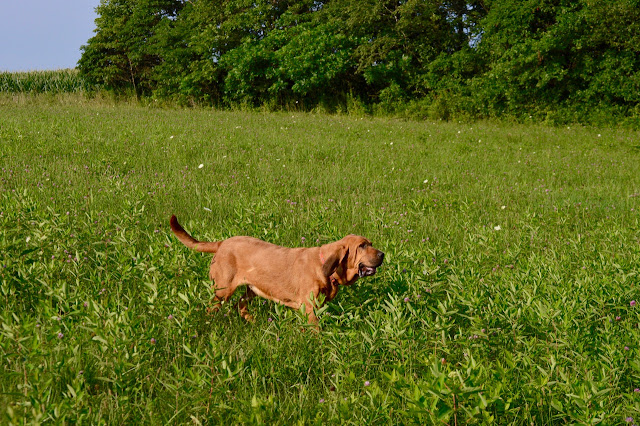 There were a couple of these butterflies following us for most of the walk. It was hard to catch them in a photo due to Sadie 'foto bombing' the picture about the time I was taking the photo or Sadie deciding to chase them. 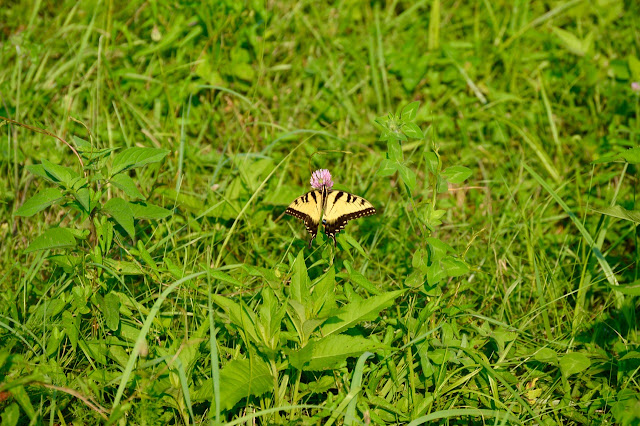 I would say for July 23, this is a pretty good crop of corn this year ... tall and green. 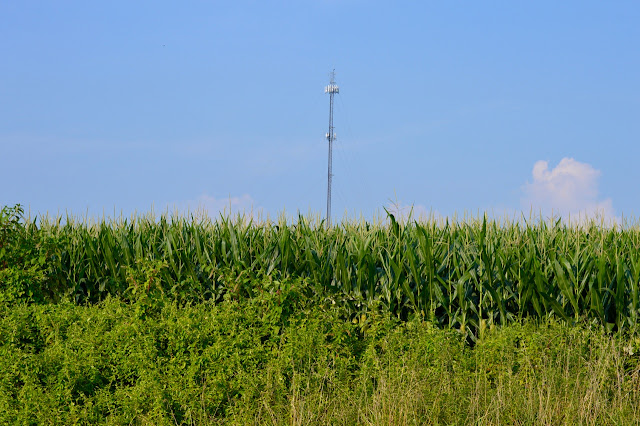 I could feel the heat a little more on the way back. I could also see the hounds slowing their pace down a little ... a lot of standing and a lot of panting. 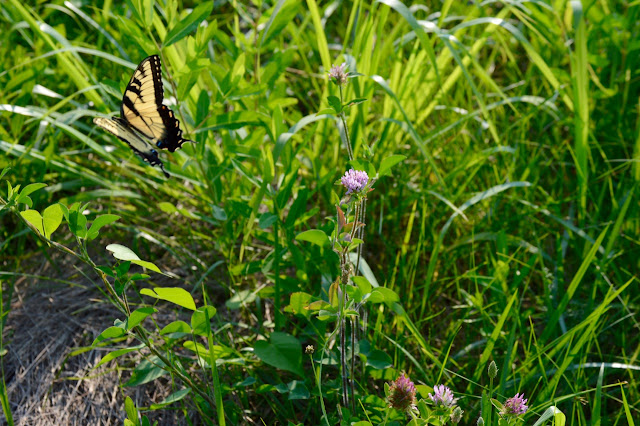 Tonight Stella came every time she was called to keep her from wandering ... it was too hot to spend extra time on the walk, she seemed okay with that. 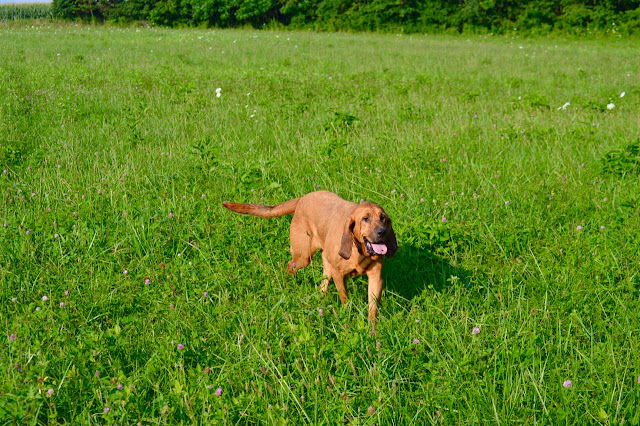 Almost home and they can feel the air conditioned air from inside the house all the way out here. They finished their walk with a trot so fast I wasn't able to catch them with the camera, they were right behind me that quick. 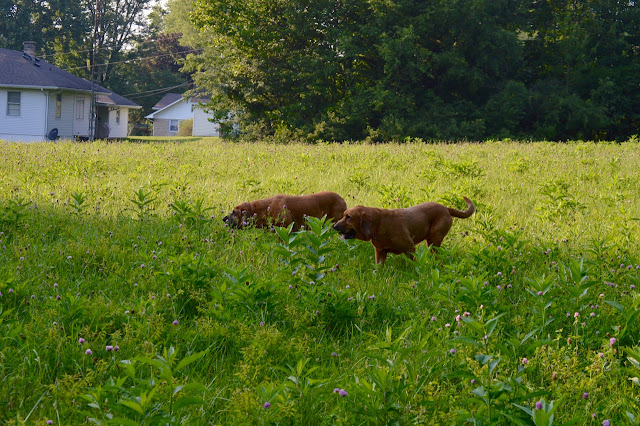 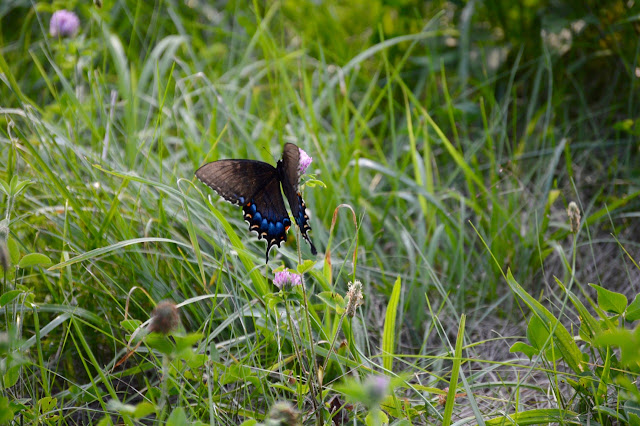