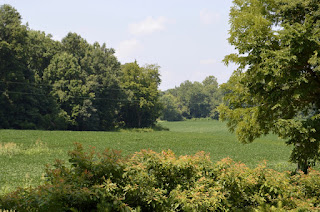 I admit, we didn't start our day until AFTER 12 noon. It was still the normal routine though. The hounds had their breakfast around 7:15am and by the time they finished I was back in sleep mode. Why??

It all started at 3am last night where it was so hot I couldn't sleep. I got up and lowered the temperature for the AC to kick on. Normally I raise the setting while sleeping. I had to take a glance at Wunderground, then saw at 3am the temperature was still 76°.

This morning I could feel the rush of muggy heat hit me as I opened the door to let the hounds outside at 7:15am. I don't think they even go out to pee anymore ... they hang out by the door while I pour their kibble for breakfast. 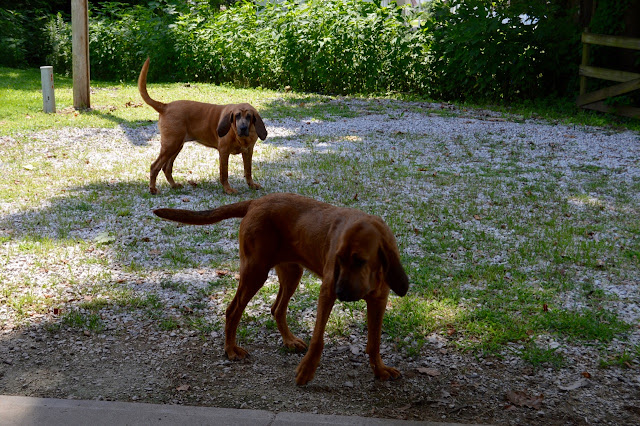 With that late start they didn't have lunch until after 1:15pm. As you can see from the photo above Sadie and Stella were not real enthused about being outside.

Heidi made her daily trip around the Z4 to either the front yard or behind the Yews to dump her tanks. I prefer the yard because it's easier to pick up. 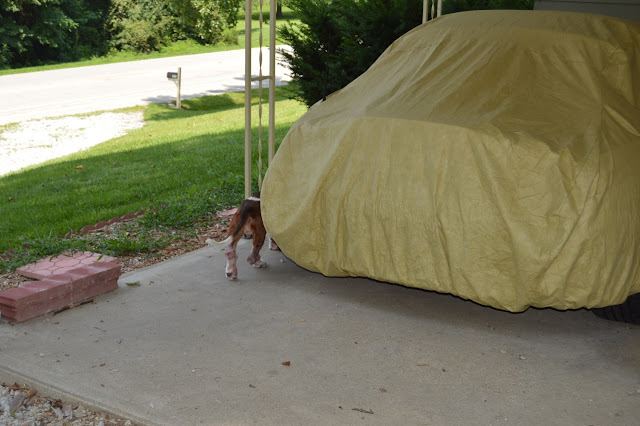 As I turned around from taking Heidi's photo, Stella decided it might be nice enough at 89° to lay in the sun for a while. Yet with the heat index at 110°, she jumped right up and headed for the house when I said "come on let's get cool". 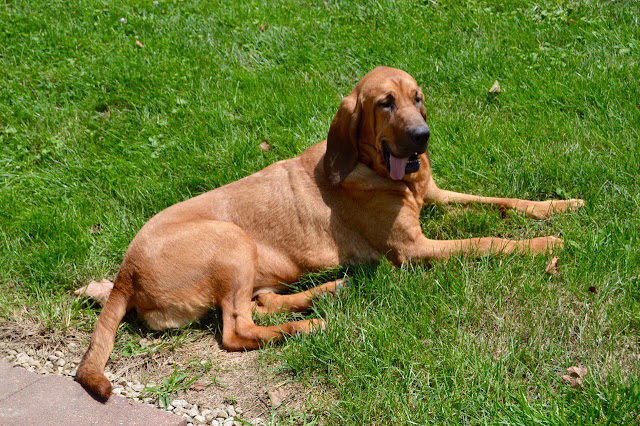 Sadie thought about it ... a walk that is ... but she also wanted to go back inside rather than try to beat the heat. She is looking pretty good in this photo and I actually think she may have lost some weight this summer. She needs to. 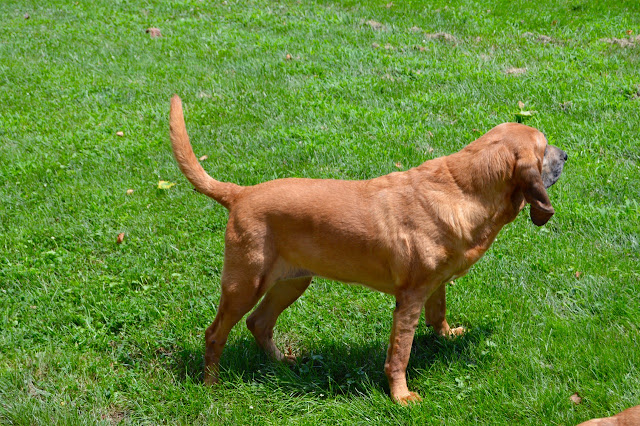 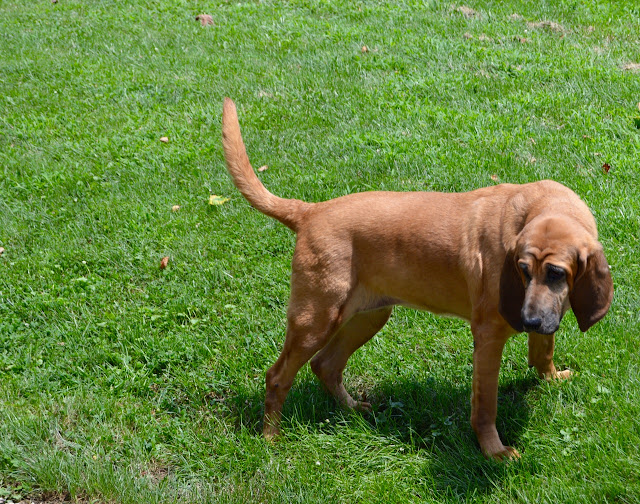 For this time of year I think Heidi's skin is looking pretty good. There are some red spots but all four paws have hair now, her front legs have hair now whereas in the past all of that was sore, inflamed red skin. She has been on chicken and rice kibble, the same food the bloodhounds eat since late April ... so her problems were not a food allergy. 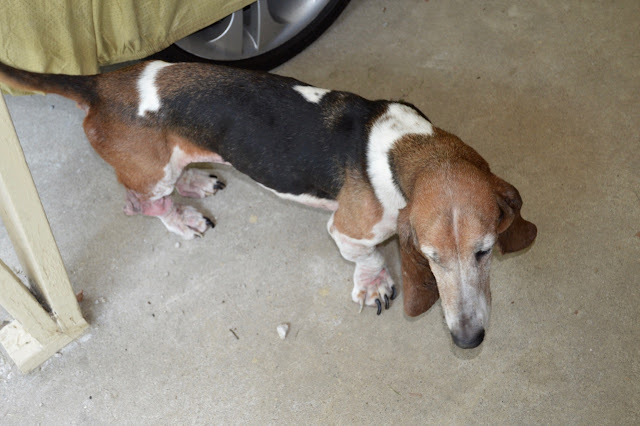 We went outside for the normal afternoon break for the hounds during 'bad' weather .. it was like an oven but not a dry oven. There will be NO walk tonight. Since there is not much more going to be gone on tonight, I'll post this a little bit earlier than normal.

That 'break' I was talking about is demonstrated by Sadie and Stella. They come to me when it's time. 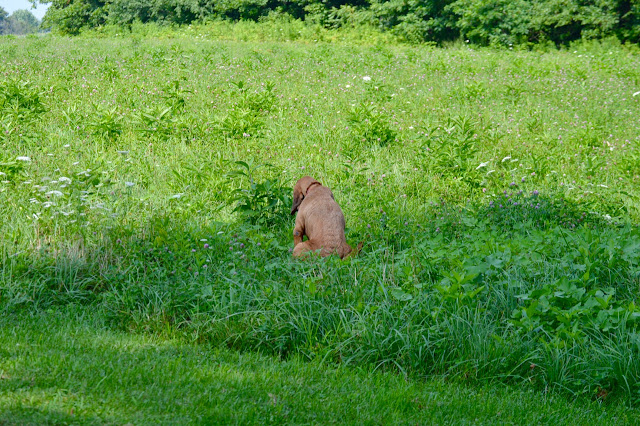 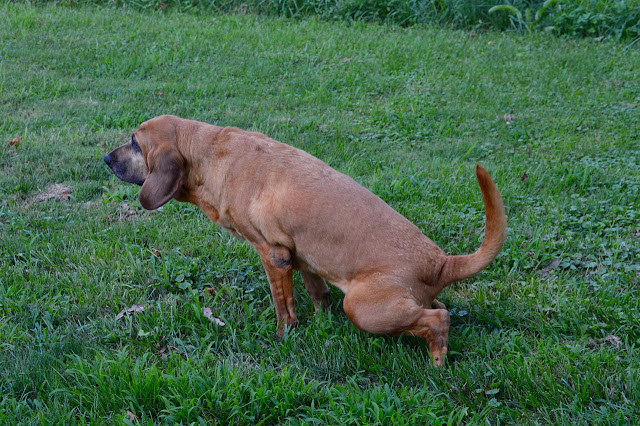 Sadie is just making a check to see if I might be going back inside to change into shoes in preparation for a daily hound walk ... she is hoping for one. 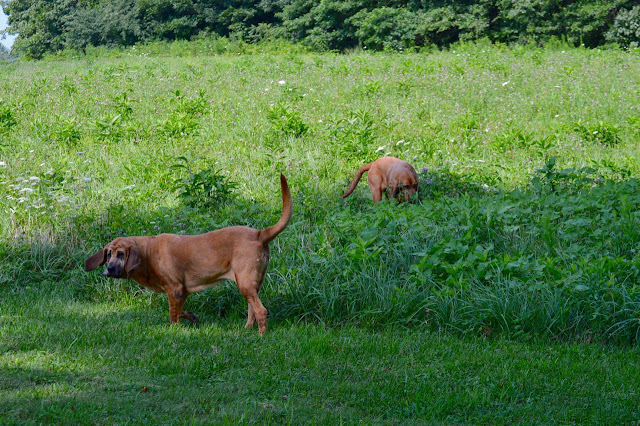 She was very curious what Stella was eating but it was nothing more than some tall grass. 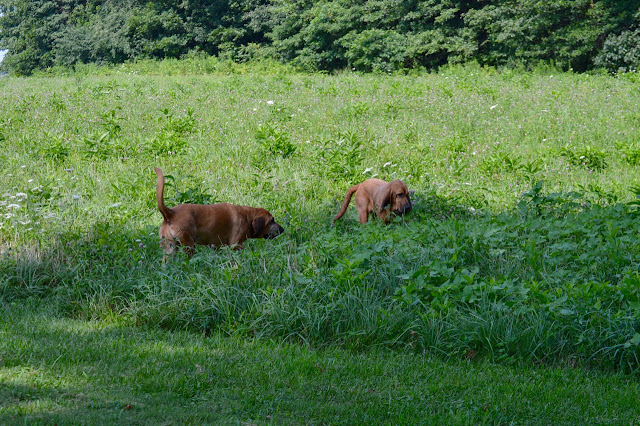 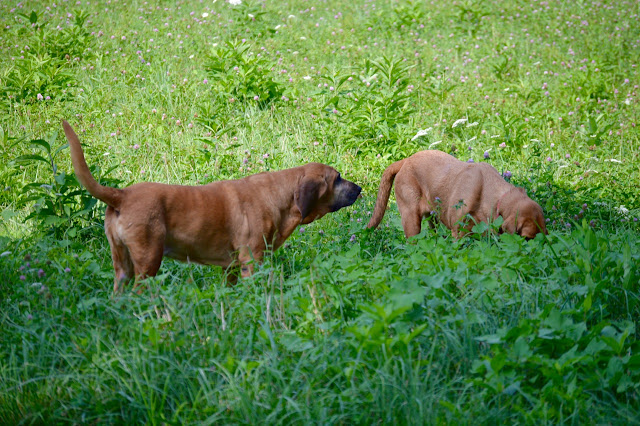 Notice that neither one is wandering off very far, maybe 20' from the yard but no way are they heading to the back of the field like they normally would. 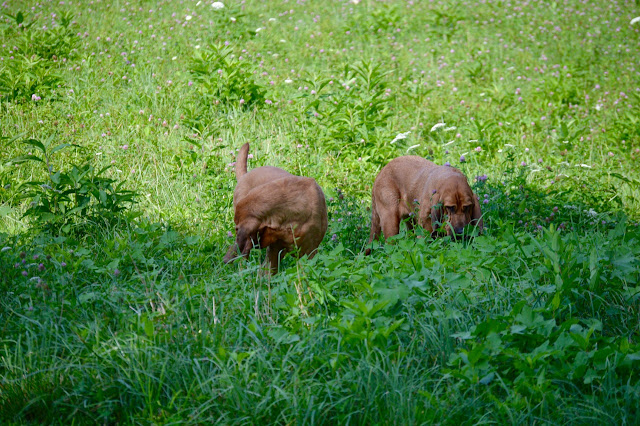 "What??  No walk today?? Unbelievable" 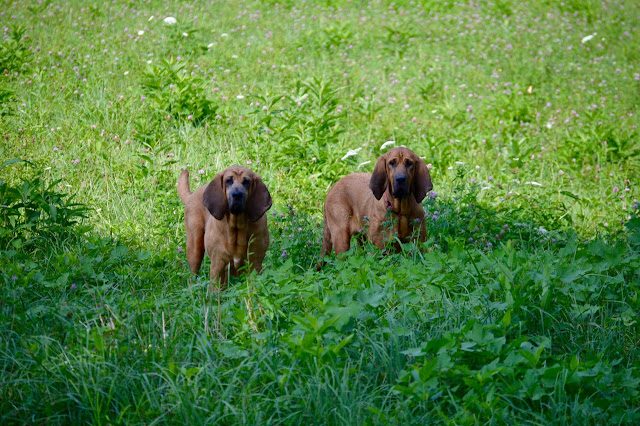 A little rambling now ... all non-political.

I've added my own blog to my left sidebar as a blog I follow. I did that because a lot of times my recent blog post is NOT updated for those that subscribe by email for almost 18-24 hours AFTER I post a new one. Sometimes I've noticed it takes that long for it to update on blogs that have my blog on their sidebar. So to see if it made a difference, I added my own blog to the left sidebar.

I tried to quit but went back to Facebook. I don't have a lot of friends listed, by choice, and rarely post verbal stuff ... but I post a short partial sentence and a photo or two of the hounds. I have friends there that love the hound photos that don't read or follow my blogs. Plus I have a lot of different 'groups' that I follow and read.

My Wordpress blog doesn't get hardly any activity. It's listed on the left sidebar and there I have always had just one sentence and anywhere from 1 to 12 photos of the hounds. Most of the photos are duplicates from the ones I have here but better quality which I have discussed here before. I'll keep it going though since there is a few times I like to post just photos.

With my computer room set at the coldest temperature of all other rooms in the house, Stella likes to sleep either next to or right behind my desk chair. She never moves until I get up, always thinking immediately that I am getting food that she might get. She doesn't understand that all food in this house is not for her.

Although ... while mowing the yard last Thursday I left the hounds inside because it was too hot outside. It wasn't gone for more than 15 minutes. When I came inside to drink water after mowing just the backyard ... I noticed she was very intense while eating something held between her paws, that she never looked up ... she had 'counter surfed' and grabbed not one but two of my Mangos !!!!

By the time I saw her she was about the complete the 2nd one. I googled to see if mangos were okay for hounds ... skin and the fruit are okay BUT those tiny black seeds inside the large pit can kill any dog. Luckily the pit on both mangos were not cracked open. From now on, that bowl of fruit will be moved to the top of the fridge when I am outside mowing ... just one other thing I have to do to "baby proof" the house while I am away.

I think we are headed for Dairy Queen for a large "Hawaiian Blizzard" ... the hounds are a fan favorite at the local drive through, although I turned down the offer of single cups for for them.

It's been a nice day here in 'the tropics' of Southern Indiana.
at July 24, 2016
Email ThisBlogThis!Share to TwitterShare to FacebookShare to Pinterest
Labels: Mangos, Rambling, The Daily Dog Walk