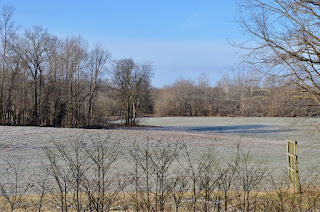 The sun was bright and early this morning. Just glancing out the windows I could tell how cold it was without even checking the weather apps.

A change of routine this morning since I went back to sleep after feeding the hounds their breakfast kibble around 7am. Once I was up officially, I started coffee but we took our first walk of the day before I had consumed even a drop. 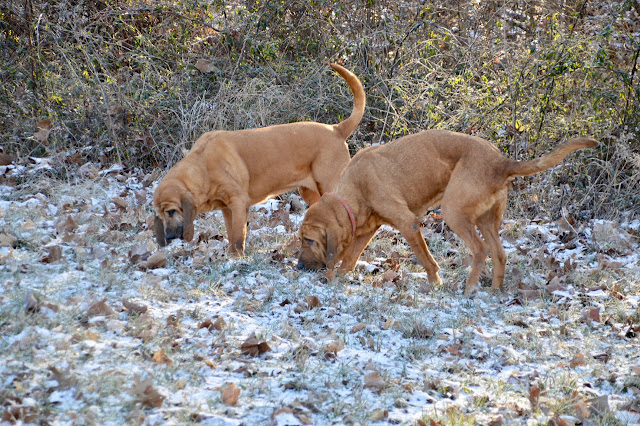 Although I was dressed appropriately for the coldest weather, it was still a shock to the system as the frozen snow crunched under my boots with each step. It tried it's hardest to snow yesterday and last night but by this morning there wasn't much left. 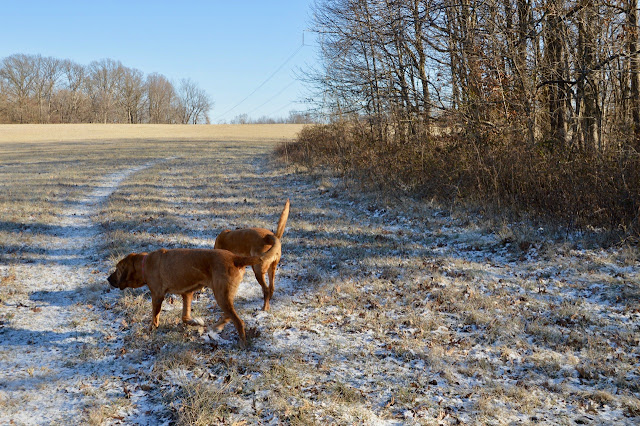 Both hounds were off to a fast start. 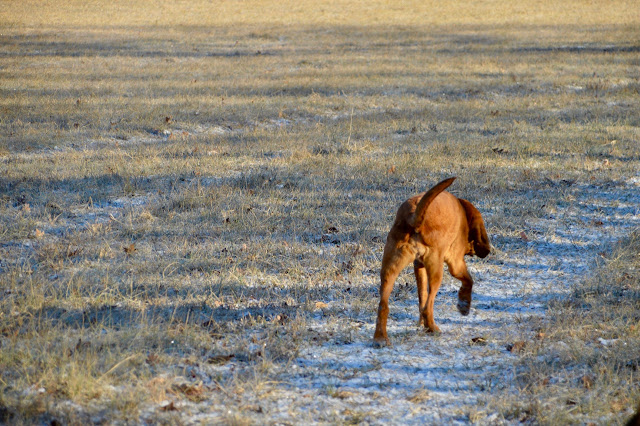 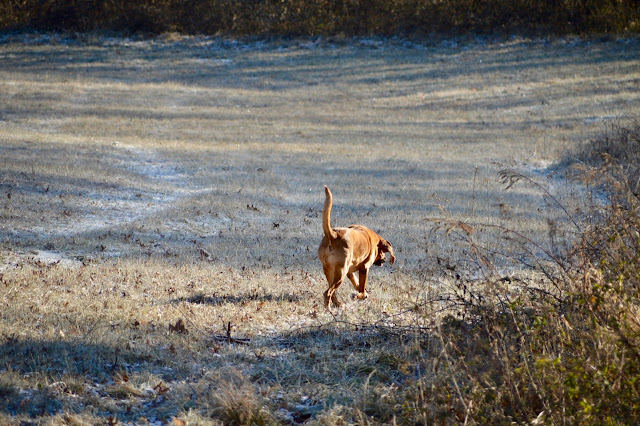 Once again they both ended up going back to the same spot they have gone to for the past 7-10 days. I just kept walking the path and glancing back at Stella just in case she would take off on a wild chase somewhere. 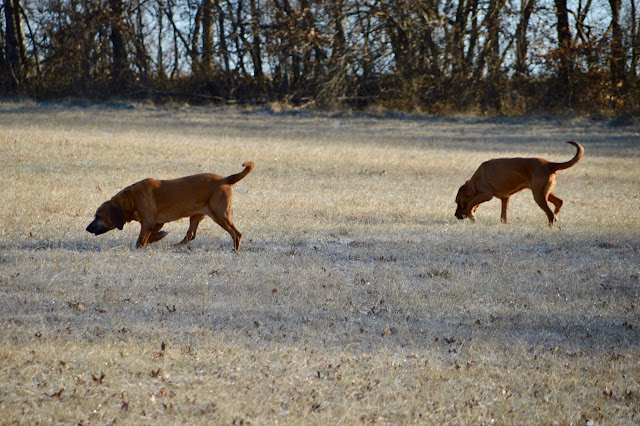 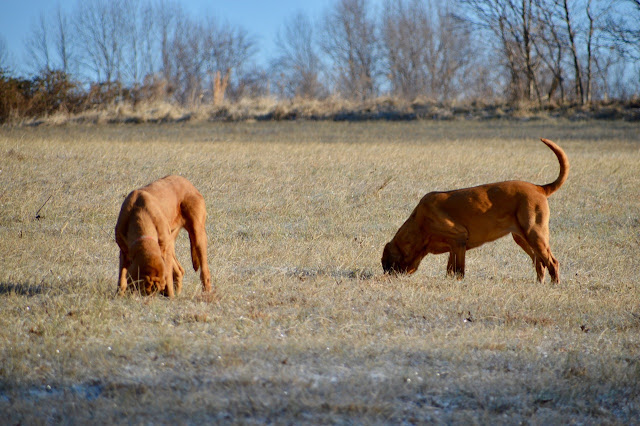 Sadie came sprinting back to me as I headed down the back edge of the field. I don't know if she is checking on me or letting me know that she has things under control, namely Sadie. 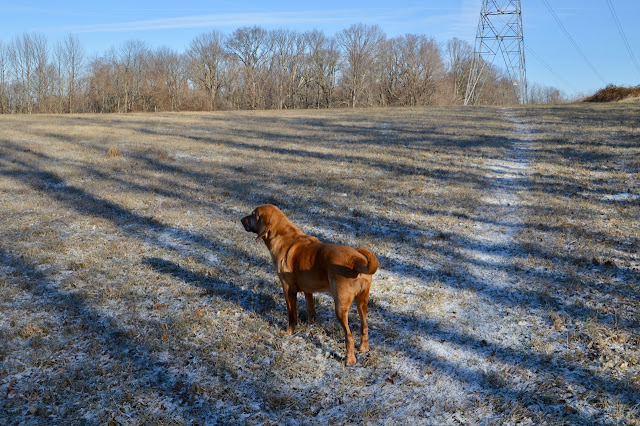 While Sadie stared at Stella, it was getting a lot colder than when we started with the last half of the walk to go. When I left it was a bitter 22°, little wind and the sun did not make a difference when it came to warming things up. 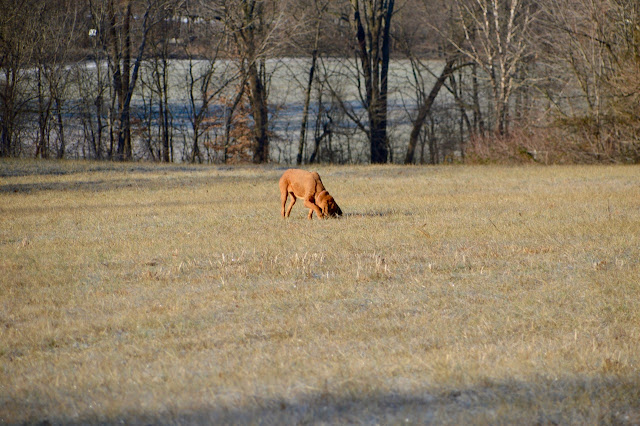 I decided to take a picture from a different angle than I do most of the time of this farm. 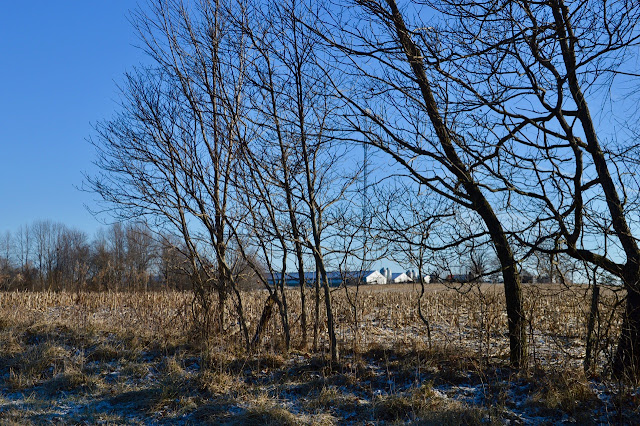 I had not gone too far down the path when Sadie decided it was time to gather up Stella and head home. She must have been getting cold, because she ran most of the way home, finishing with a sprint all the way to the house outside of camera range. 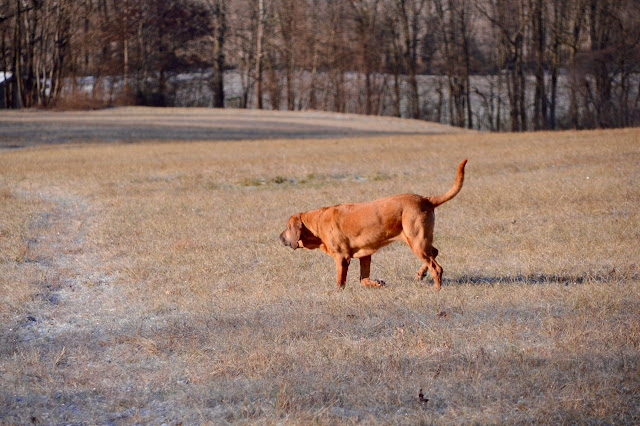 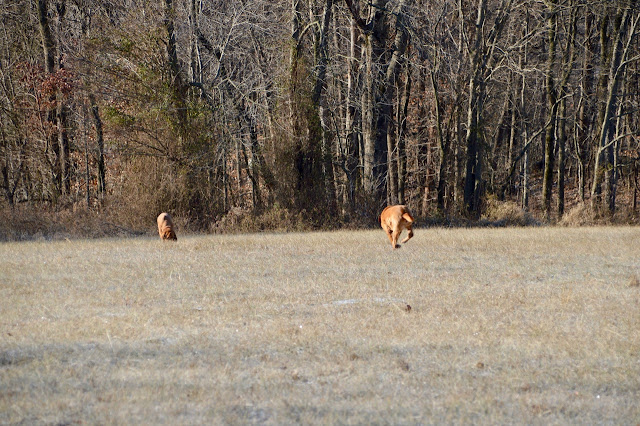 I am not sure what the message is but whenever Sadie runs over and touches noses with Stella, she will always start moving toward me. Stella that is. 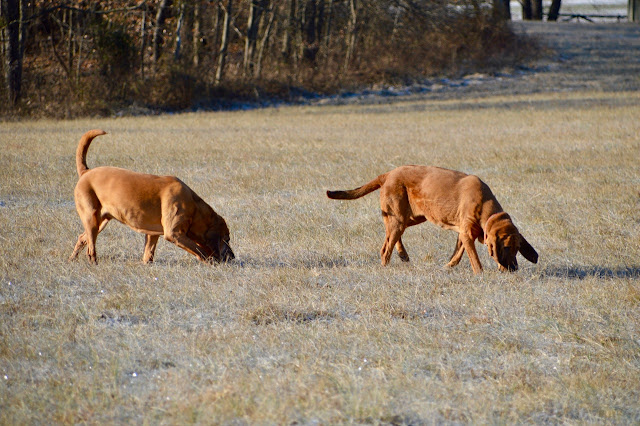 With my auto focus setting, it would not lock onto the planes I was seeing but at one time I counted five different planes within view as long as I turned a full 360°. I caught a couple of them crossing each other at different altitudes. 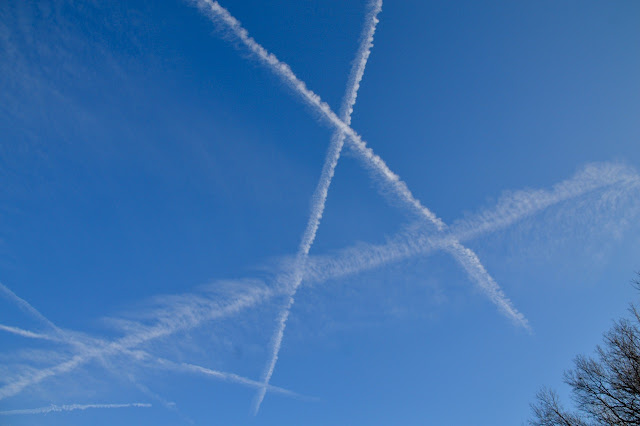 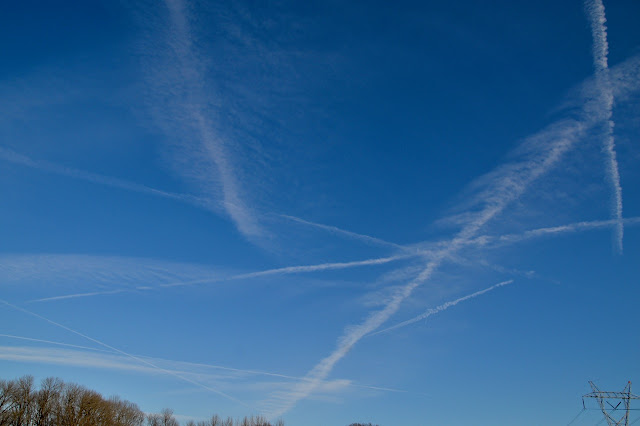 Sadie is running full speed toward the house. 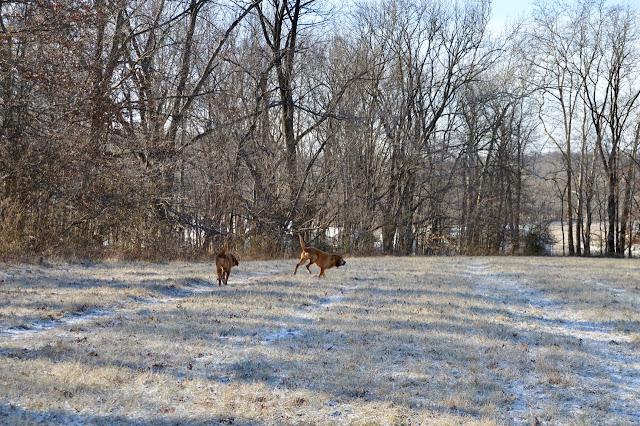 I looked to the right to try to find what had Stella's interest. I saw nothing and no one. When I told her 'lets go' she followed me along the path. In the mean time I spotted two more aircraft south of me. 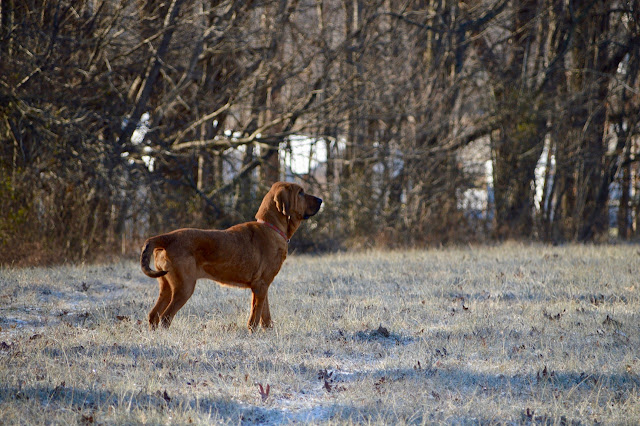 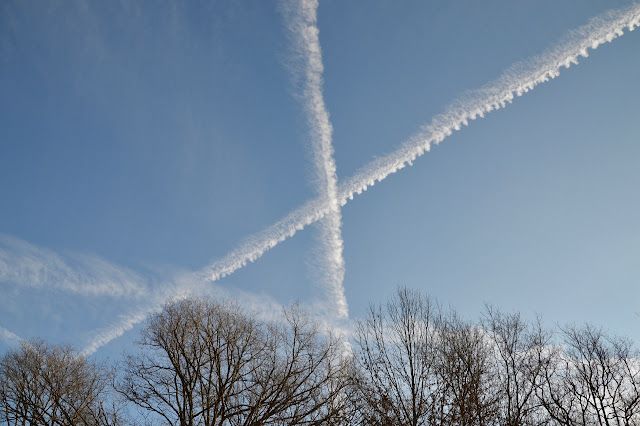 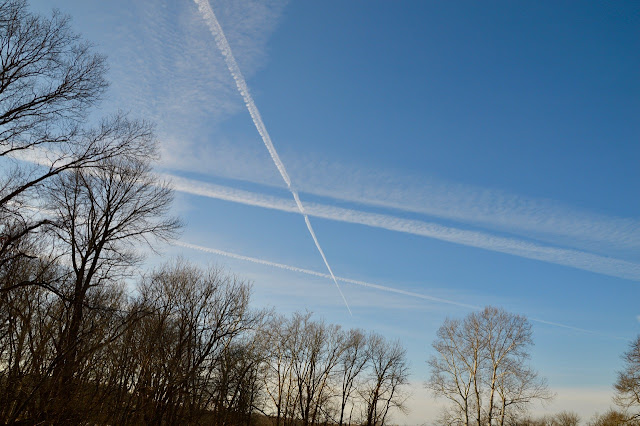 The hounds were happy to get back inside a warm house. The hot coffee even tasted better than usual and Heidi was buried all the way under the sleeping bag sunshine and all.

By mid-afternoon Sadie had bothered me enough to go out for another walk. The skies were still blue and the temps were a good 10+° warmer. I couldn't tell because I was still freezing. 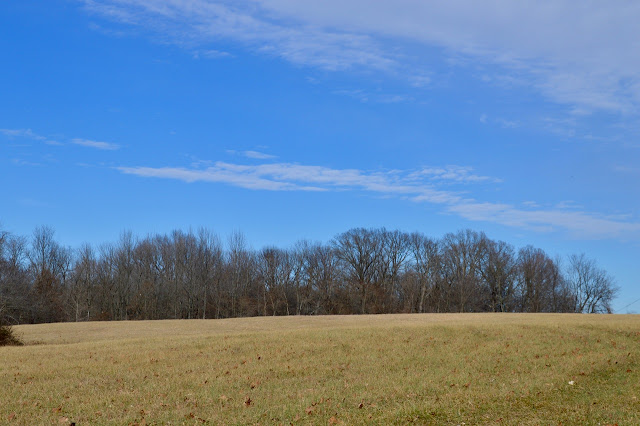 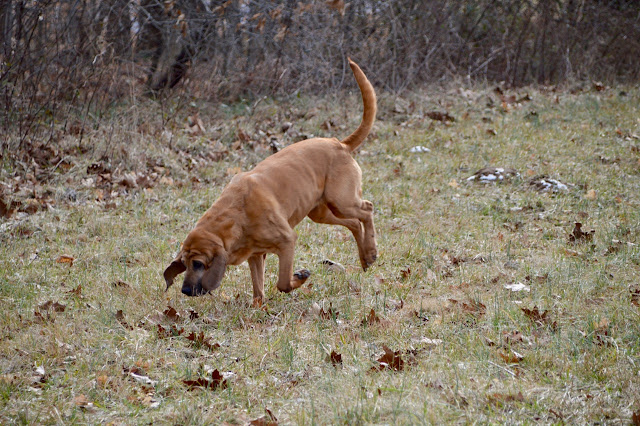 This walk started off bad right from the start as Stella not only stayed back but went into a part of the woods she had not ventured into before. Even Sadie was curious on what Stella was doing. 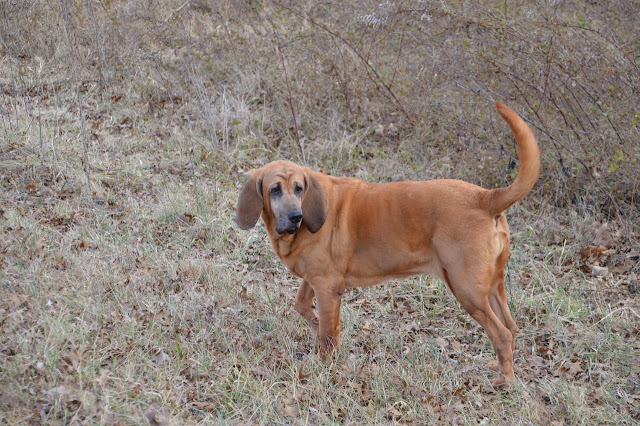 By the time I rounded the corner, I had barely taken this picture, as I glanced up Stella was sprinting across the field toward the woods. I turned off the camera, rolled the zoom lens back to normal position, grabbed the standard 6' leash out of my pocket and took off running for the woods. 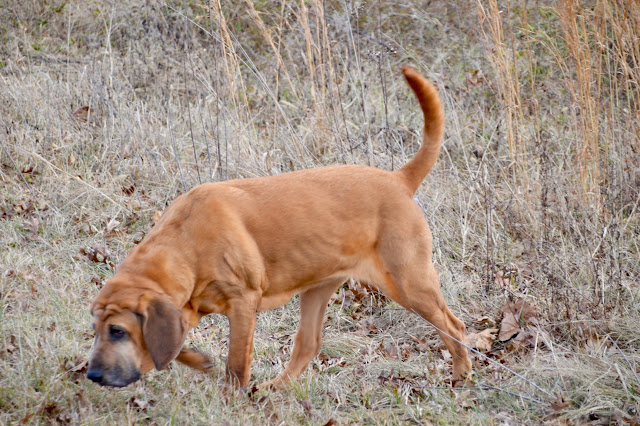 About the time I got within a couple of steps near Stella, she started trotting toward me. I hooked her up to the leash and all three of us walked the shortest distance to the house not anywhere near our normal path.

By the time we got inside I decided it was a great time to head to the library. I got online, checked availability for some books I was interested and had just written down the past 24 hours. All three of the books I wanted were available plus I grabbed a couple of new movies off their shelf.

The rest of the day was movie watching and book reading. I fit some lunch in with steamed broccoli and baked chicken breasts. Why do bloodhounds think that everything I fix to eat is for them. They only get kibble but still feel that my food is their food.

I've been using Firefox as my browser the past few days. I like a lot of things about it compared to Google Chrome but the two things that irritate me always send me back to Chrome once I get tired of the two issues.

One of those issues is Firefox does not play well when I want my screen larger than 100%. Yes, I have tried all of the settings, a new app just to do that and plenty of reading on 'how to' on Google search ... but for example on this blog ... when I write in the area Blogger gives me, I cannot expand the size of it and my fonts just for typing purposes. Google Chrome makes that adjustment without any problems.

Also since I am semi-complaining about computer stuff, every since Apple's latest OS update last week, my computer has been shutting off and restarting while I am away. I shut it off at night but leave it in the 'sleep mode' during the day if I am not at my desk.

Well I'm headed back to my books and one last movie. Temps will be in the high 40's again in a couple of days, so everything is good.

Still plenty of time for a big dump of snow here in 'the tropics' of southern Indiana ... last year February had a pretty good amount of snow.
at January 30, 2017