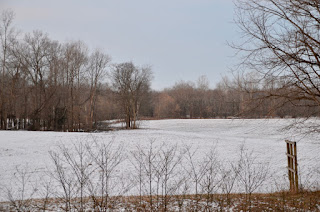 It will probably not be the last time we experience temperatures from -4° to 8° during the daytime hours this winter ... but we did over the weekend.

All three hounds didn't venture much further than the yard and only long enough to dump their tanks. Still, that didn't mean they just relaxed inside. Heidi did her normal winter routine of sleeping, eating and sleeping. Stella also slept most of the time except to remind me it was time to eat.

Sadie on the other hand had a severe case of cabin fever. That started as soon as she returned from her first trip outside after her breakfast kibble. She did not understand of course that the very low temps combined with frozen snow could harm her paws as we walked. Plus I wasn't really enthused that much either to be outside. Daily walks were canceled. 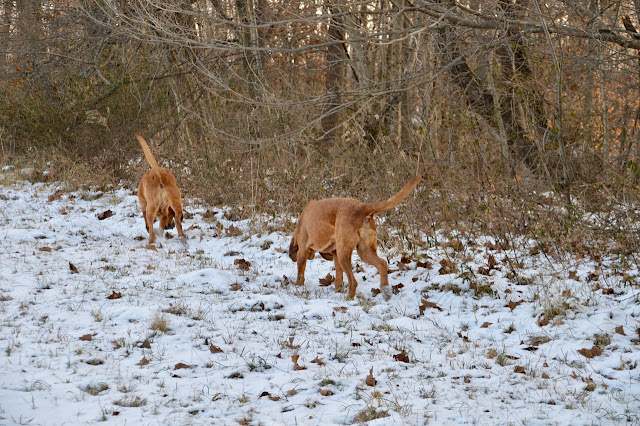 Today was different though. With the highs forecasted to be in the upper 30's by late this afternoon, it was already 24° when we got up. That felt like a mid-summer heat wave. With plans of some early grocery shopping, we took our walk around 9:30am ... the hounds were thrilled to be back on track. 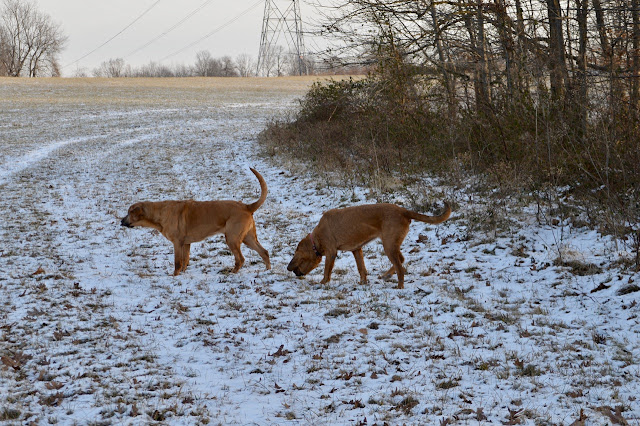 They moved out fast as if they had to be somewhere. I glanced to the woods left of me and up ahead on the horizon to see if any deer might be lingering that would cause a sudden change in plans. I saw nothing ... but Sadie & Stella both either heard or smelled deer in the wooded gully area. 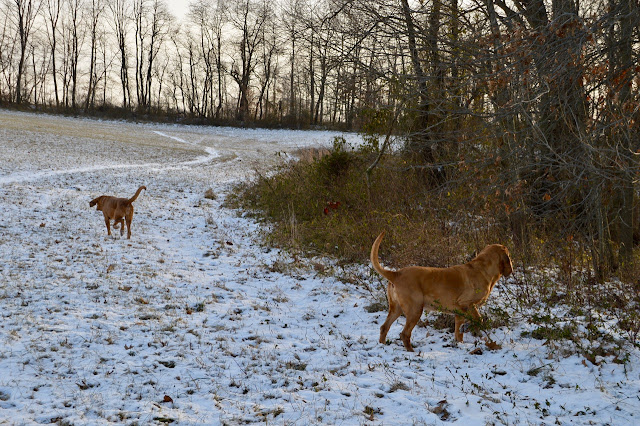 Once they stopped and looked into the woods and then took off running along the edge of the gully I was thinking deer were around the corner and the chase would be on. There are deer tracks all over the snow coming from the wooded gully area. 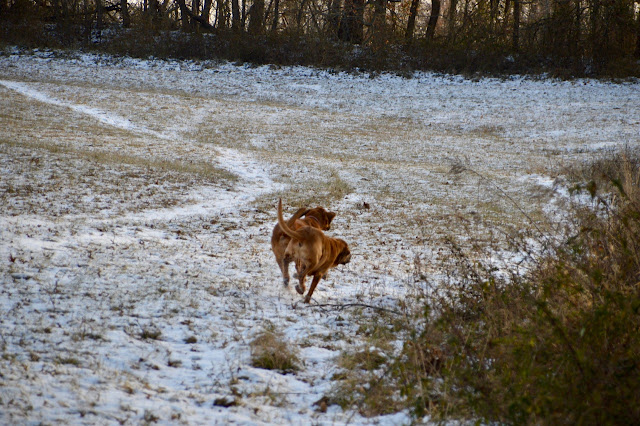 Once Stella made her stop and glanced that direction, I had my camera on and ready to capture any deer jumping out of the overgrown brush area. 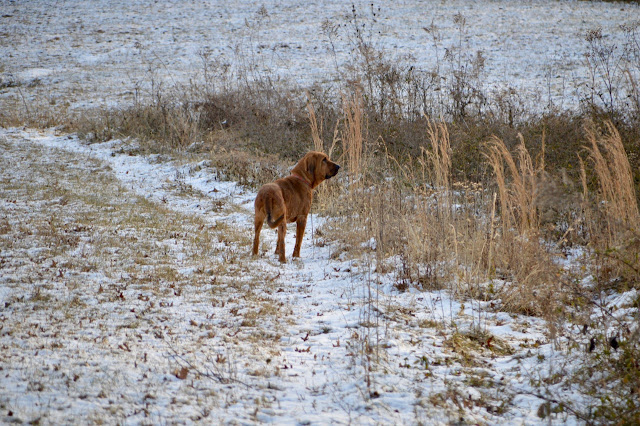 Sadie was so agitated with what she was smelling or hearing that she went the deepest she had ever been in the brush. You really have to look hard but you can barely see her just left of center, with her tailed curled. I was yelling over and over for her and Stella to "come on, get out of there".  They both jumped out of the brush and looked at me as if I had lost my mind. 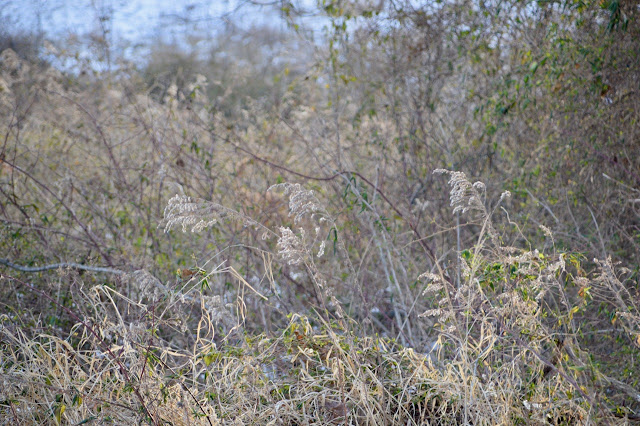 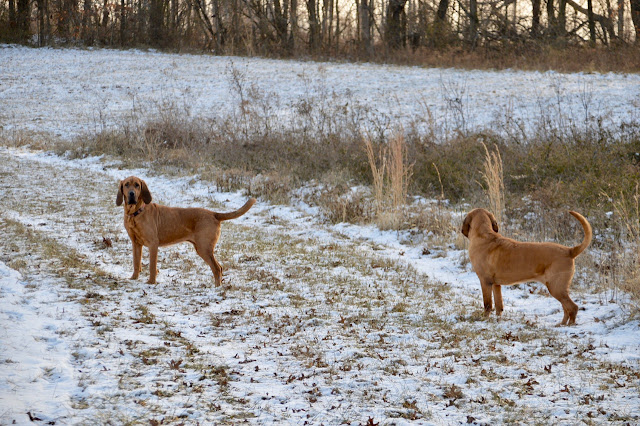 Instead of turning to the right corner and further investigating the area where there is always heavy deer traffic ... they sprinted along that edge only to run into the brush on the back edge of the field. By the way they were acting it's mostly likely deer were here running earlier this morning, but not now. 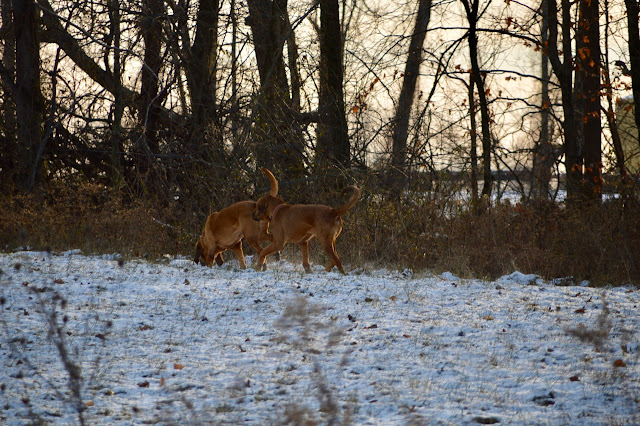 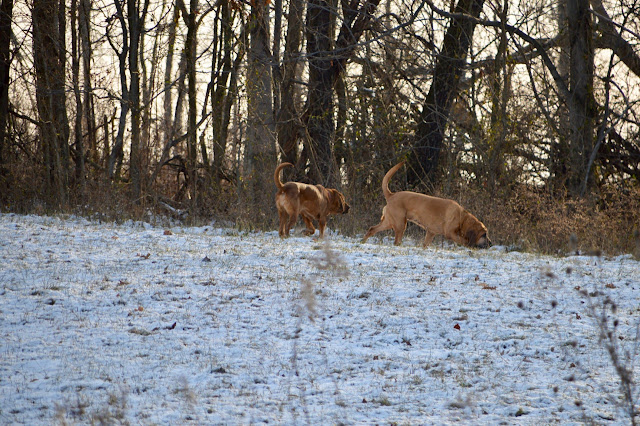 As I turned around to see where they were ... both of them were sprinting my direction and went right past me, heading for the 'no-fly zone'. 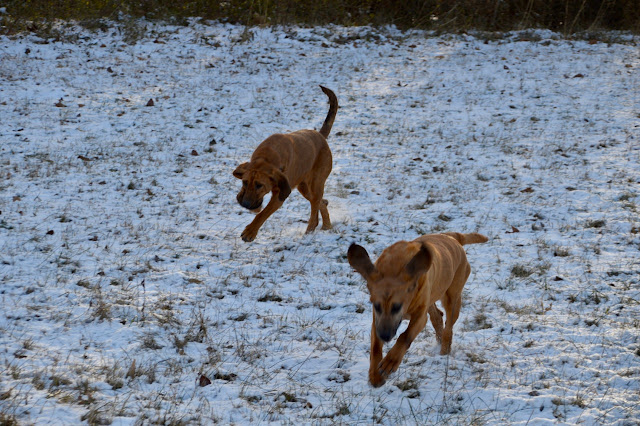 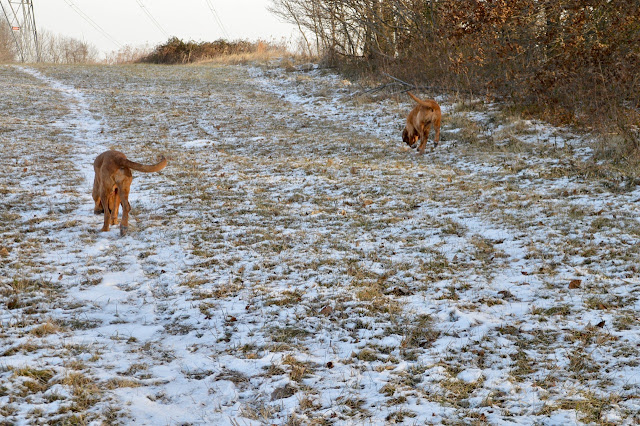 All of us made the final turn toward home but Sadie had another area to check out and identify. 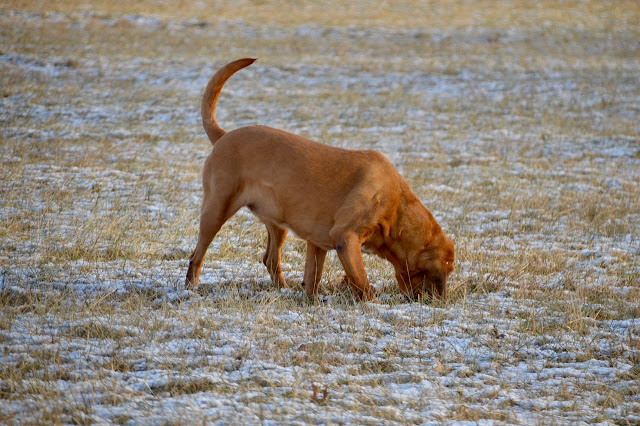 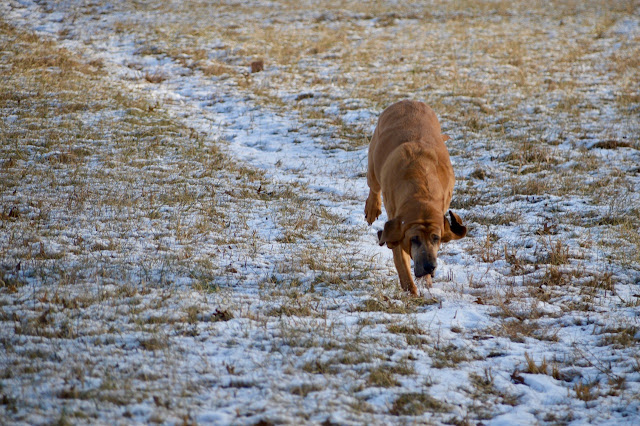 Between the snow and warmer temps ... they started playing just a short time, did some running around outside of my reflexes to get the picture and then eventually headed home. 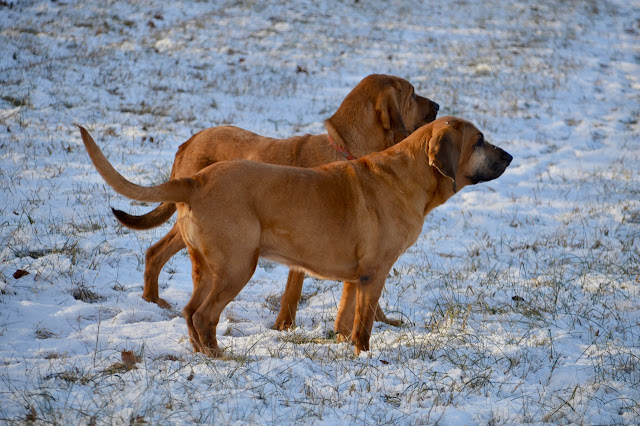 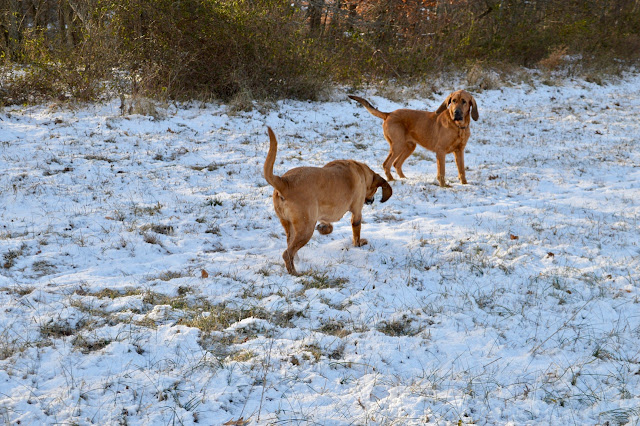 They both stopped to see which one would make the next move. It's funny how long they will stand like that, each waiting for the other to move. 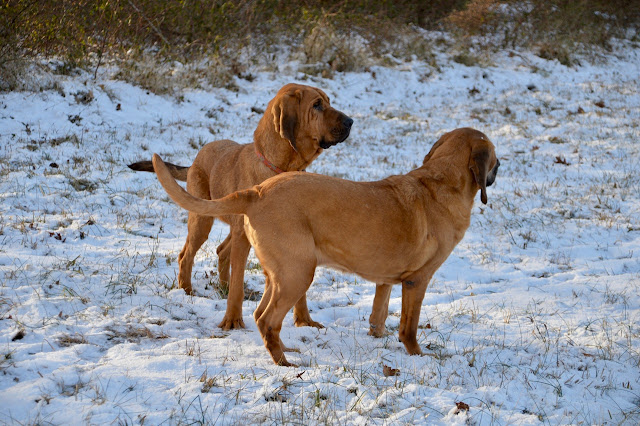 Then they are at it again, but only for a short time. 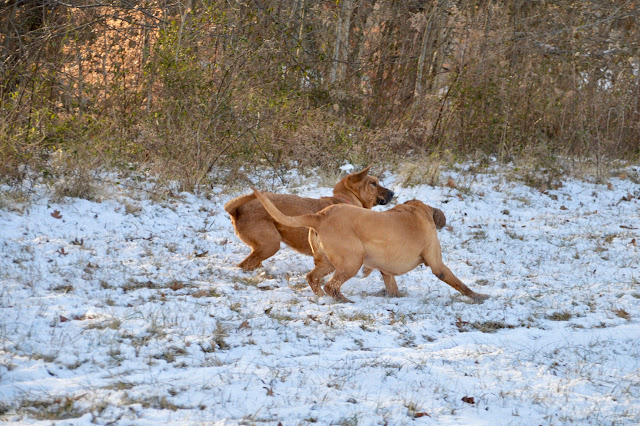 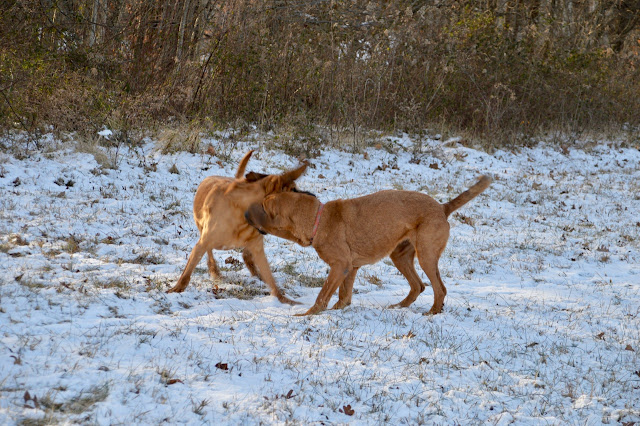 Back to standing still waiting for the other to move. 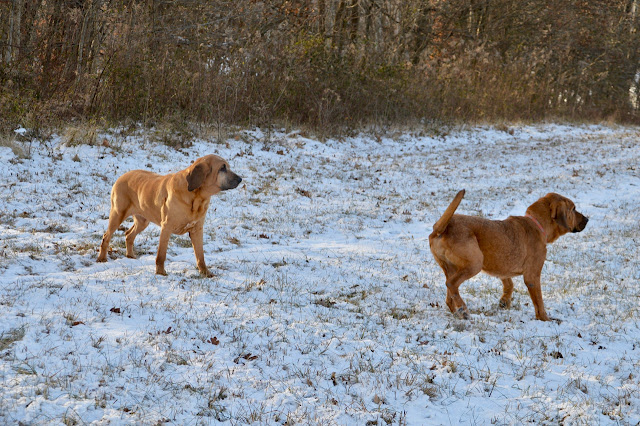 They finally decided they had enough, it was just a bit colder since we were outside for almost 30 minutes. They sprinted down the return path toward home. 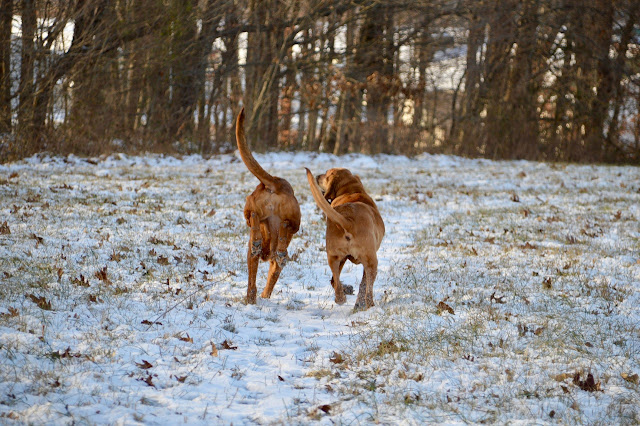 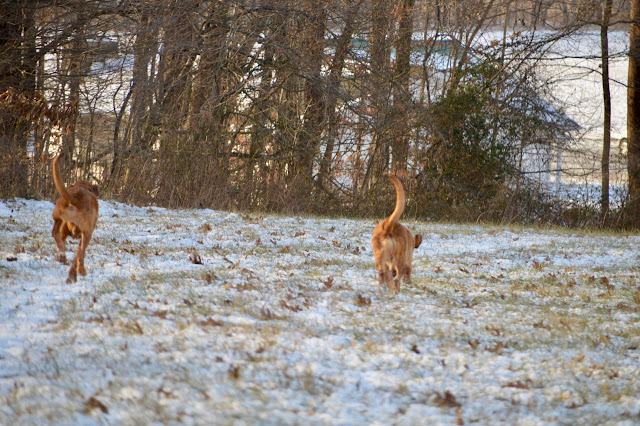 Even when Sadie stopped to sniff something one last time, Stella just kept on running .... all the way to the door. 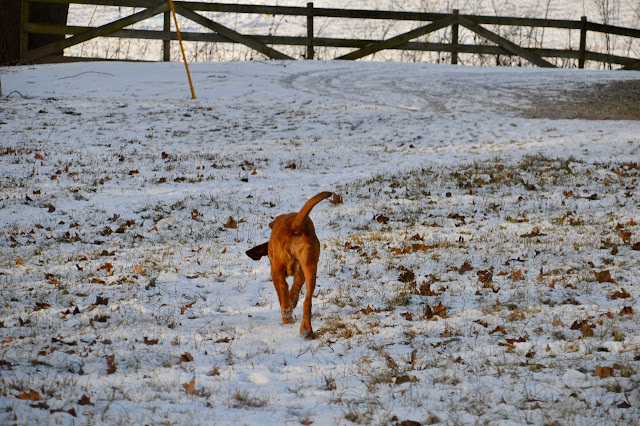 It's suppose to rain a lot the next 4-5 days but with the temps in the 40's and 50's I'll not mind the rain. How wet the ground is, will determine just how many walks we get in and how many pictures we take.

I tried Firefox as a browser again yesterday. I was really liking it, seeing that it was blocking any auto play videos. Even with the settings at "do not auto play" I've noticed recently that a lot of these news or sports sites have smaller videos in their front pages that pay automatically no matter how you have your settings, thus increases my colored data use bar on the Activity Monitor.

I once again put Firefox on the shelf due to something running in the background yesterday, that used over 300Mb of data so fast I couldn't get it turned off in time. I am not sure what it was since I have all auto updates clicked off. It will notify me when I have updates but I am the one that decides when that will be updated, so I can control my data usage. I get free data between Midnight and 5am.

I tried Safari. I imported all my current list of bookmarks, then updated the browser. That was working out pretty well except it kept deleting the 714 bookmarks I had imported. All of my favorite sites across the top bar would vanish. After re-importing the bookmarks 3-4 times, I closed Safari and went back to Google Chrome.

Only this morning when I clicked the FlashBlock icon did I find that all of the settings were unchecked. Must have happened after an update of some sort. So after I rechecked those correct settings, Google Chrome has been blocking all video.

Not much I can do when I have a monthly limit on data unless I want to take a out a 2nd mortgage to pay for additional data ... it's ridiculous how much they want for just a few more Gig's of data per month.

I don't know how I started thinking about it ... maybe it was the single digit temps seeping into my brain cells ... but the spelling and use of the word "coUrse" or "coArse" came up. I had always used the word coUrse when writing on the blog but it would yellow out on a spell check telling me that was wrong and would accept 'coArse'. I used that for months if not years on this blog.

All I would have needed to do was type either word into the browser address bar to get my answer. I cannot tell you why it took me this long to further investigate the proper use. I found out 'coArse' is wrong so today I am back to using 'coUrse' when saying "of course".

Maybe the discussion I saw on Facebook yesterday about the correct process in using a period cause me to step in the forbidden area of the english language. The discussion was about how many spaces were to be used after the period ending a sentence ... 1 or 2 spaces.

A century ago when I was in school taking a typing class I was taught to put 2 spaces after a period, and 2 return keys between paragraphs. They are saying now that is incorrect, that only 1 space should be used after a period. I wonder if I will adapt to that change or keep typing the way I type.

College Football will be officially over tonight sometime a little after midnight eastern time. Should be a good game with the same two college teams playing for the championship as last year. No matter what happens I doubt it will be as exciting as the Rose Bowl was last week between Penn State and USC.

Being the sports junkie that I am, I have now turned my attention to college basketball and I started really back in November when the season started. That will move me to April Final 4 games, ending college basketball just in time for MLB baseball to start. It's a vicious circle but someone has to do it.

I'm going to start a pot of Cajun beans and make some cornbread later, for tonight's 9pm kickoff. The hounds will be in the 'dream state' of sleeping by then but I'll still have to fight for my spot on the couch and don't dare get up and lose my seat.

Warmer temps here in 'the tropics of southern Indiana.
at January 09, 2017