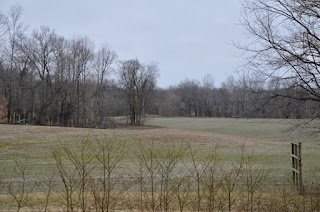 I can't really say what the reasons were for my lack of blogging lately. There are more than a few possible reasons but none of them are that important.

I just didn't feel like blogging, nor taking pictures at times. It seems to be an annual event where I shut down the blog, the social media, turn off the tv and escape reality by losing myself in books. One after another, and sometimes reading one from cover to cover in a 4-5 hour setting, while forgetting it's 2am. 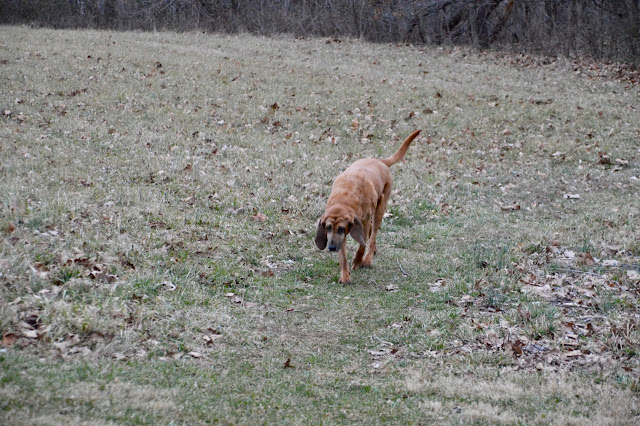 Our absence could have been the weather. For the past few weeks the skies have looked nothing different than the picture below. The temperatures may have moved back and forth from 20's to 40's but those are never a factor in walking the hounds. 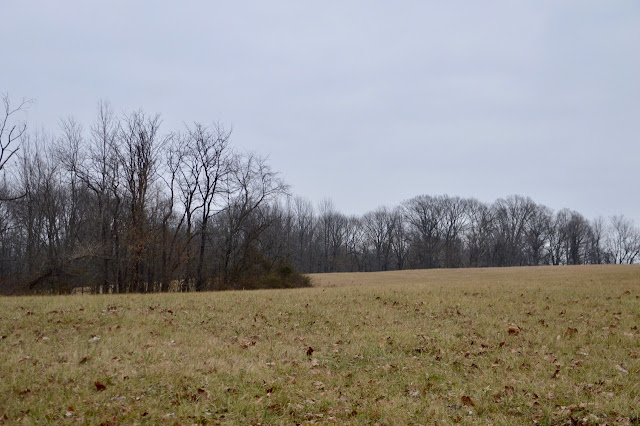 The rains were never heavy but it rained enough to keep us inside most of the days. Between the warmer temps melting the frozen ground and the rains our walks were on very wet ground. Water would come up over the edges of my boots with each step and water trails would follow each paw of Sadie and Stella as they moved through the field. 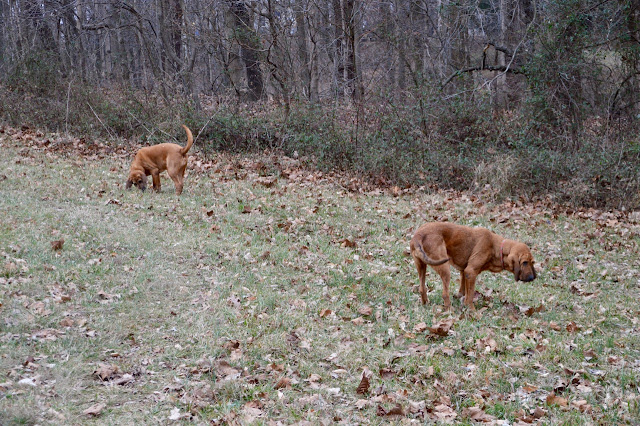 We still walked most of the days but lately the camera had to stay inside because Stella had to be leashed again. Combine her recent escape with a wild run the other day and her stubbornness levels recently reaching 200% ... there wasn't a choice but to connect the retractable leash to her collar.

I am still not sure what animal is enjoying this fallen tree but if my eyes are not deceiving me I think I see that chewed limb's diameter getting smaller. 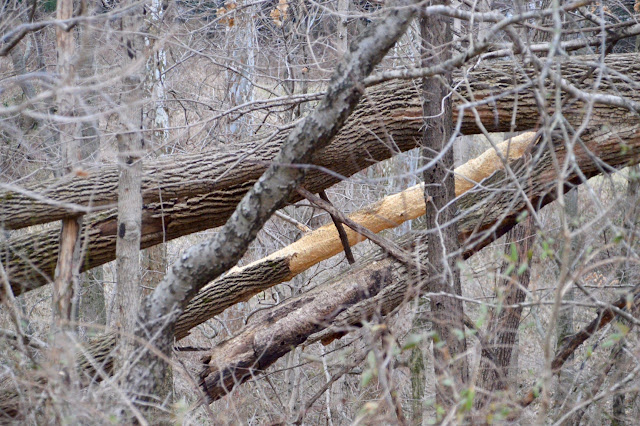 For weeks I had zero urge to blog publicly. I stopped putting a picture or two of the hounds even on my Facebook. That place has turned into nothing but a political cesspool that even the best privacy settings don't work. I glanced over at my Wordpress blog and decided to delete the whole thing.

This morning though, something changed halfway through my 2nd cup of coffee. I had the urge to add all of those blogs I deleted from the list a week or so ago. By the time the hounds and I got ready for our walk I had a feeling I might post here today.

I left the retractable leash on the door handle, grabbed the 6' standard leash and my camera. The standard leash could be folded into my jacket pocket in case I needed it.

I felt like taking pictures again, even though they seem to never change to me. I even felt like blogging again. 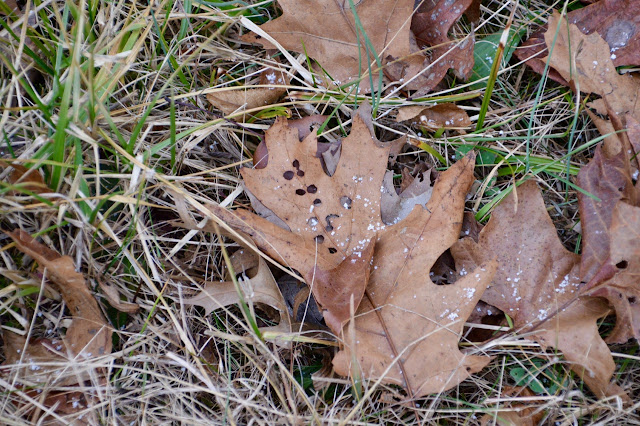 My green jacket sleeves showed it was trying to snow but it didn't have many more snow crystals on the sleeve than those leaves did in the picture above. I thought it was 30° but it felt colder. At first I thought I may have not chose the right jacket and gloves. I found out after our walk "it feels like" 20°. 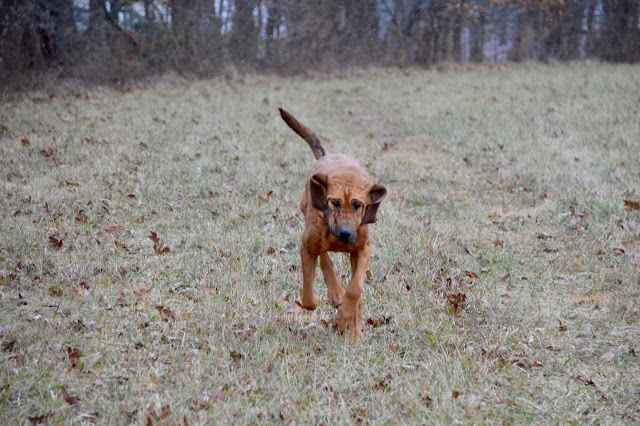 Stella was happy to run and there isn't a minute in the day or night where Sadie isn't happy about going outside. She has turned into a great house dog but she could probably spend the majority of her days outside if I would let her. 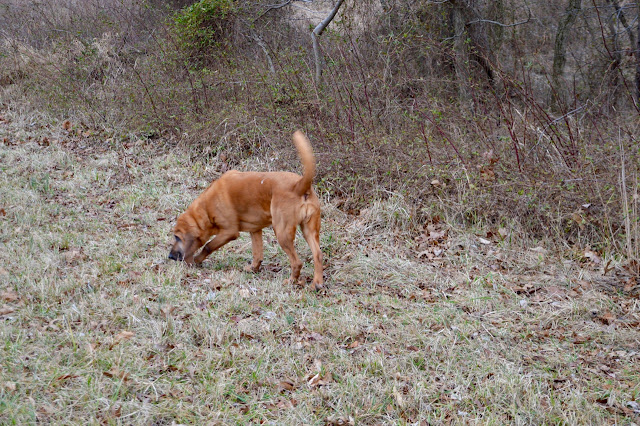 Over the past week all of the deer scents and scat have moved from the heavy brush along the edge of the field out to the middle of the field. I can't remember the last time that both hounds headed for the far right corner of the field. There were times in the past I couldn't pry them from that area and now they never head that direction. 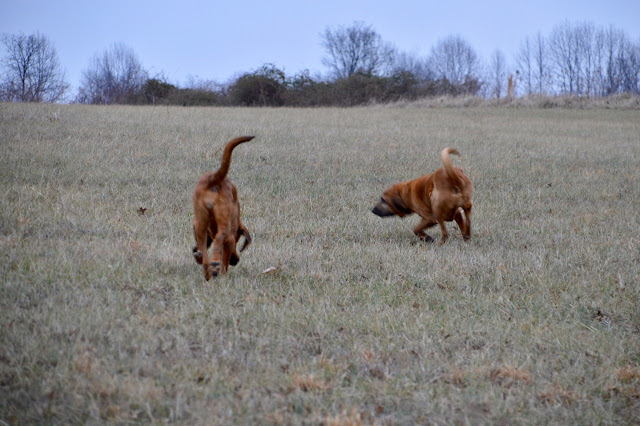 They both stay in the middle of the field while I continued to walk along the back edge and then making the final turn home. It's been that way for the last 7-10 days. Sadie will always run up to me to make sure I okay and then she will retreat back to Stella to let her know it's time to go. 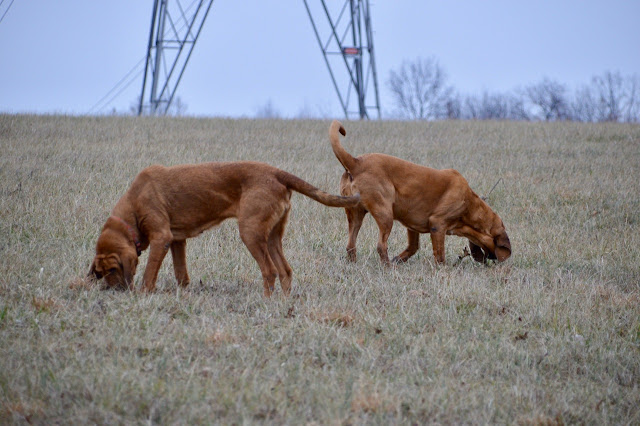 The scents were strong this morning. Sadie was moving in so many different directions, luckily the camera caught most of them. 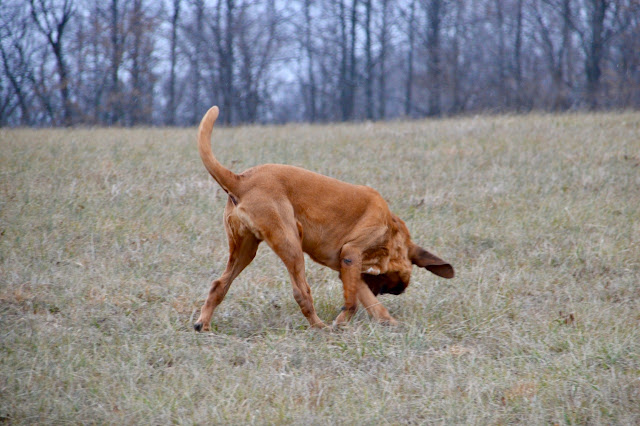 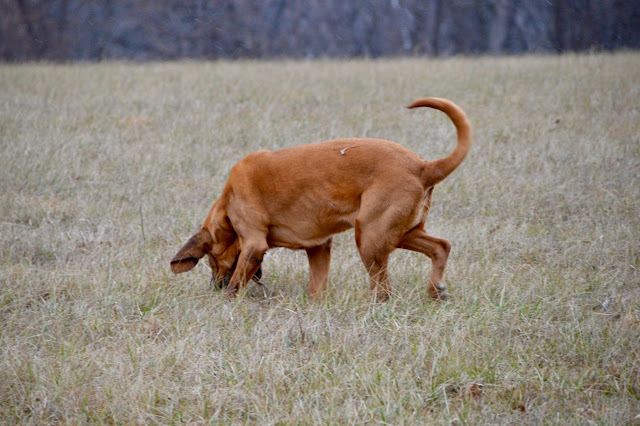 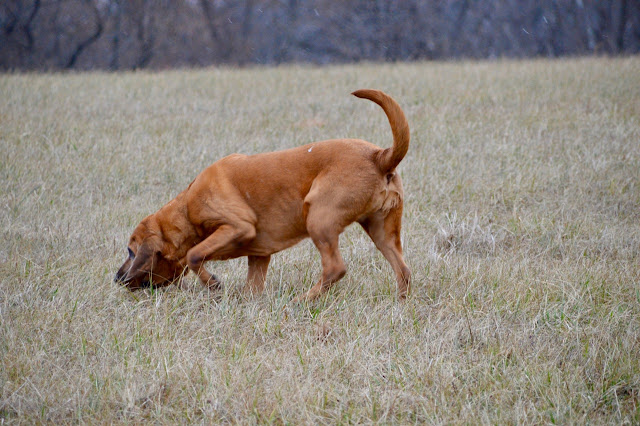 That pose of Stella is about all she has been doing the past week or so. She will raise her head to look at me and then back to eating. Constantly ignoring my calls of 'come on'. That is when I have to walk over to her and connect the leash to get her to move. 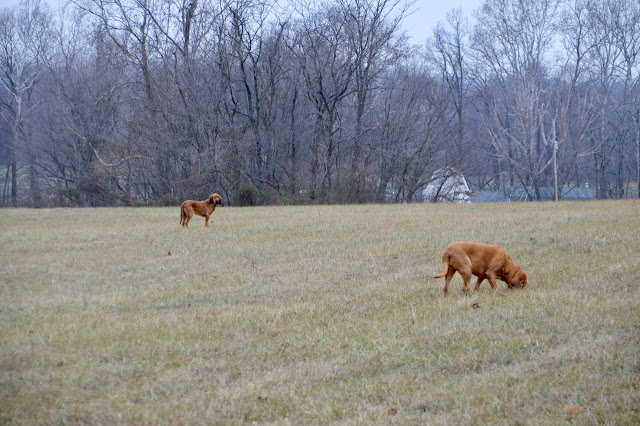 A few summers ago, they left a roll of hay in the field for quite a while. That spot changed from bare dirt to the greenest patch of grass in 7 acres. 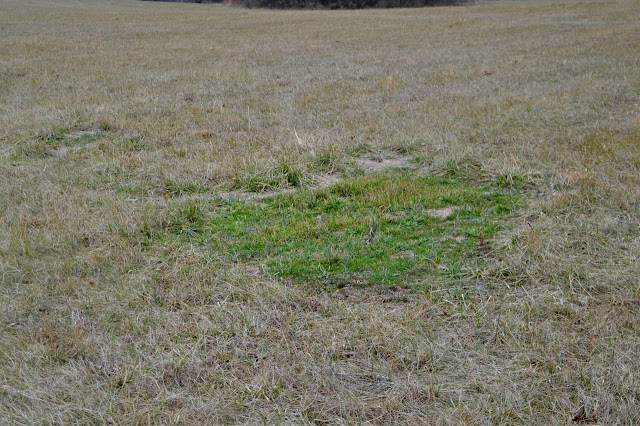 This picture right here is the perfect example of Stella's recent walks. Walking nor running has been high on her list of priorities. 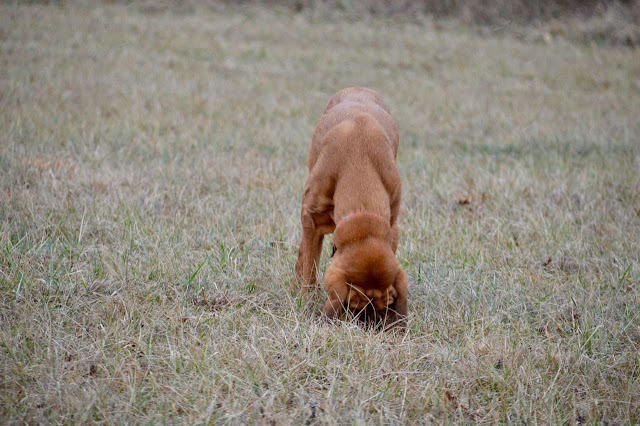 Not until I attach a leash to her collar and then take it off of her in a few steps, does she start to head home. 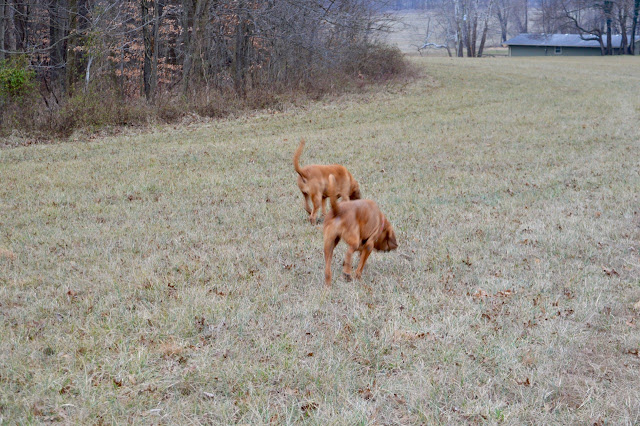 The other day was different though. In the middle of that trot, she stopped and looked toward the woods to her right. I knew I was going to be sprinting after her in a matter of seconds. I glanced that direction and didn't see any deer but by that time she was gone and baying all the way.

I thought it was a blonde cat that jumped out of the woods but it looked much larger than a cat. what ever it was, Stella was right on it's heels and all of that thick brush and woods didn't matter. She charged through that like it wasn't even there. I had to go to the other side of the woods to connect Stella to the leash to bring her home.

The next day on the return trip home, she trotted over to the woods again but there was nothing to chase. She ignored me calling her. She just needed to double check the unknown animal was not around. So for the next few days, the camera stayed home and Stella was back to doing walks on the leash during the whole walk.

Heidi is looking better and even feels heavier when I pick her up. Her trips outside are few and short. Nothing longer than to dump her tanks in this cold weather. She has become quite attached to my Marmot sleeping bag this winter. She will put on a shivering act until she is covered up with the bag, even with the house warm inside. 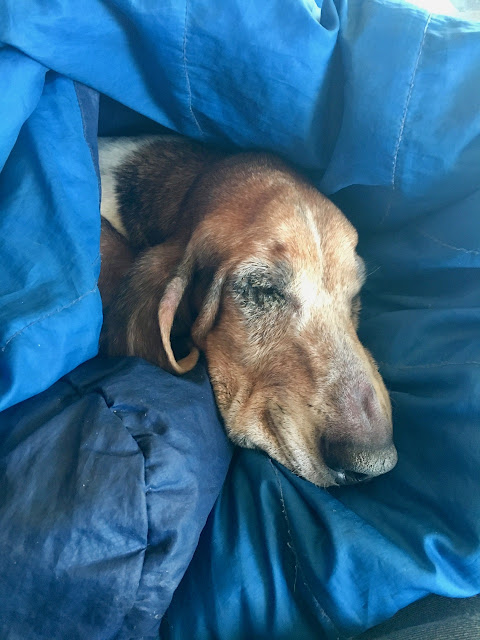 Therefore she is not doing much more than this until those outside temperatures get back to 70°. 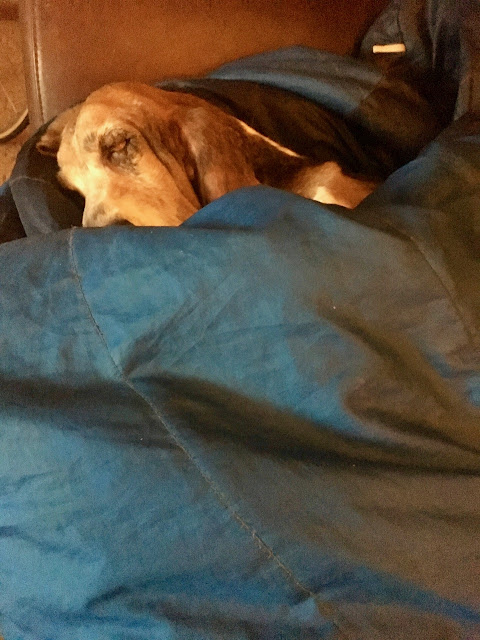 I'll close by saying I don't know how frequent I will post in the future. I might go back to posting every day or I might have a few days or a week in between my blog posts, it just depends on what I feel like doing.

Retirement living is always good in 'the tropics' of southern Indiana.
at January 29, 2017