Not Warm Enough For Heidi 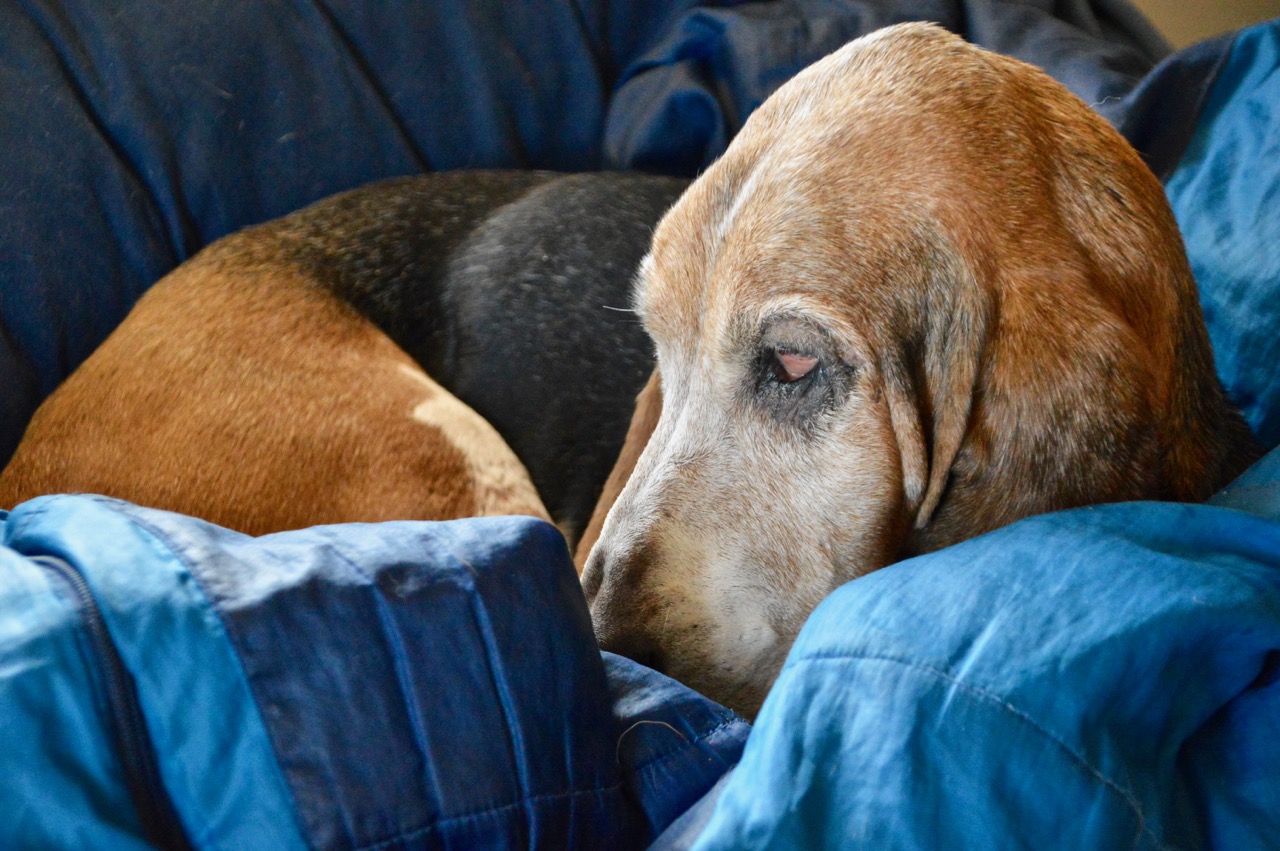 It might be sunny and blue skies outside but that doesn't mean that Heidi has declared that spring has arrived. It is not even close to her threshold of 70° and until then she will act accordingly. That means a lot of sleep time and as the day gets longer she will eventually end up on the couch that she shares with Stella every night. She does spend time outside right after her lunch and depending if it is raining or freezing, the only options this week, she might take a lap around the house. Sadie and Stella were happy to be outside this morning even with a ground that was frozen.

There is a little 'ranting' below. 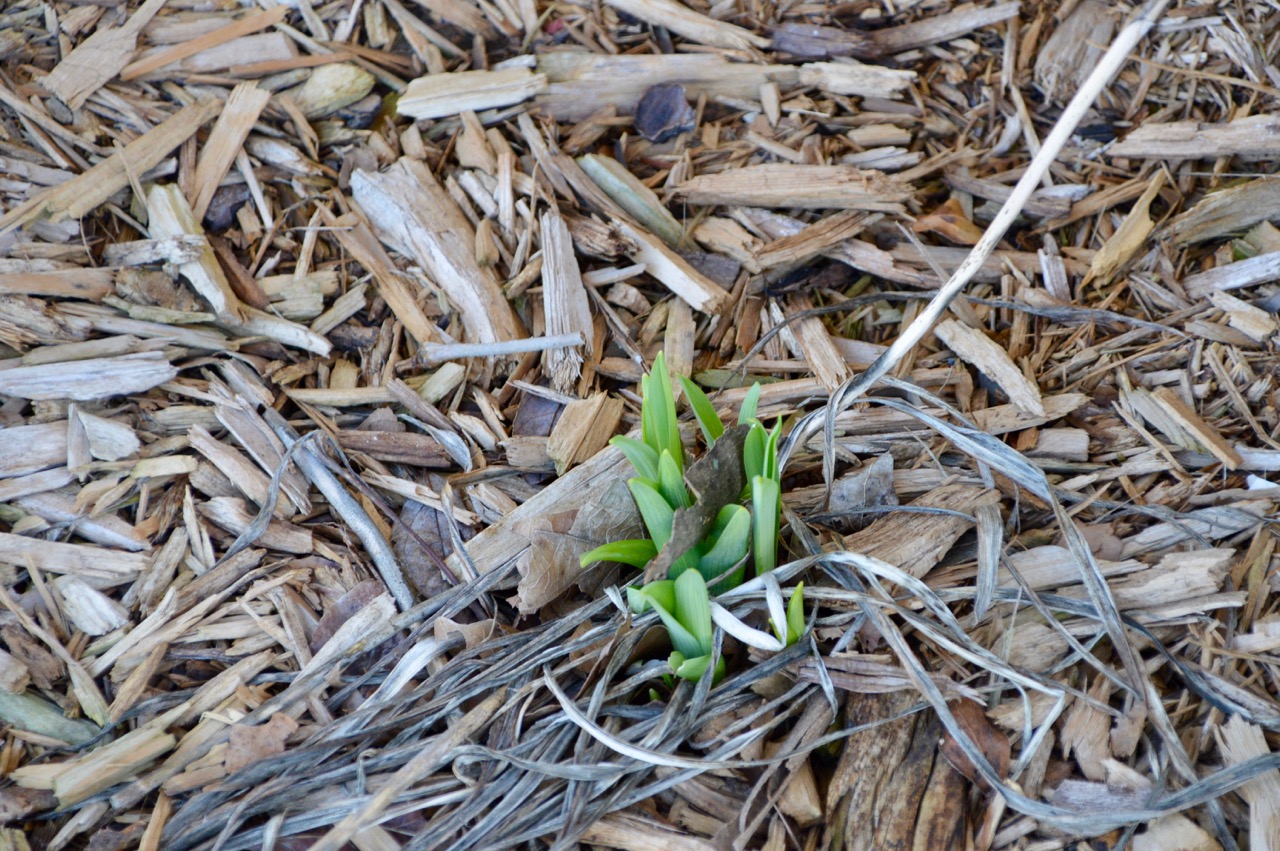 These popped up a few days ago, in the four different areas I planted them last summer in the middle of the July heat after the Japanese Yews were pulled out. I miss the deep green yews in the winter but they had become just to big to keep trimmed. I still didn't know until they were pulled out, just how deep their root system was and if it could reach my septic system.

I took a little over 24 hours to go from lakefront property to a corn field drained like pulling a plug of a bathtub drain. Evidently the Ohio River, ~70 miles away, must have stopped peaking, giving the rivers in Indiana a place to run to. It's nothing new, happens every spring but we are way ahead of the annual rain schedule. 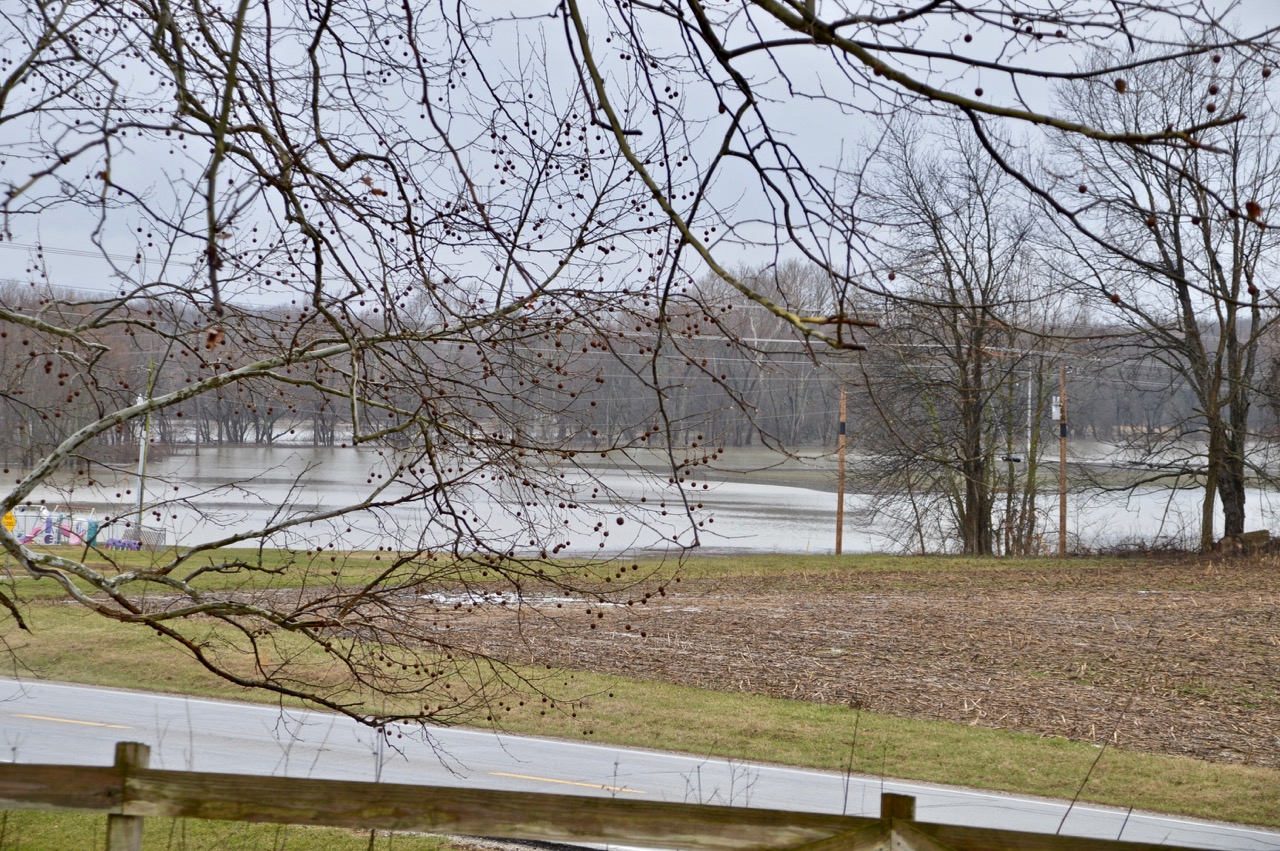 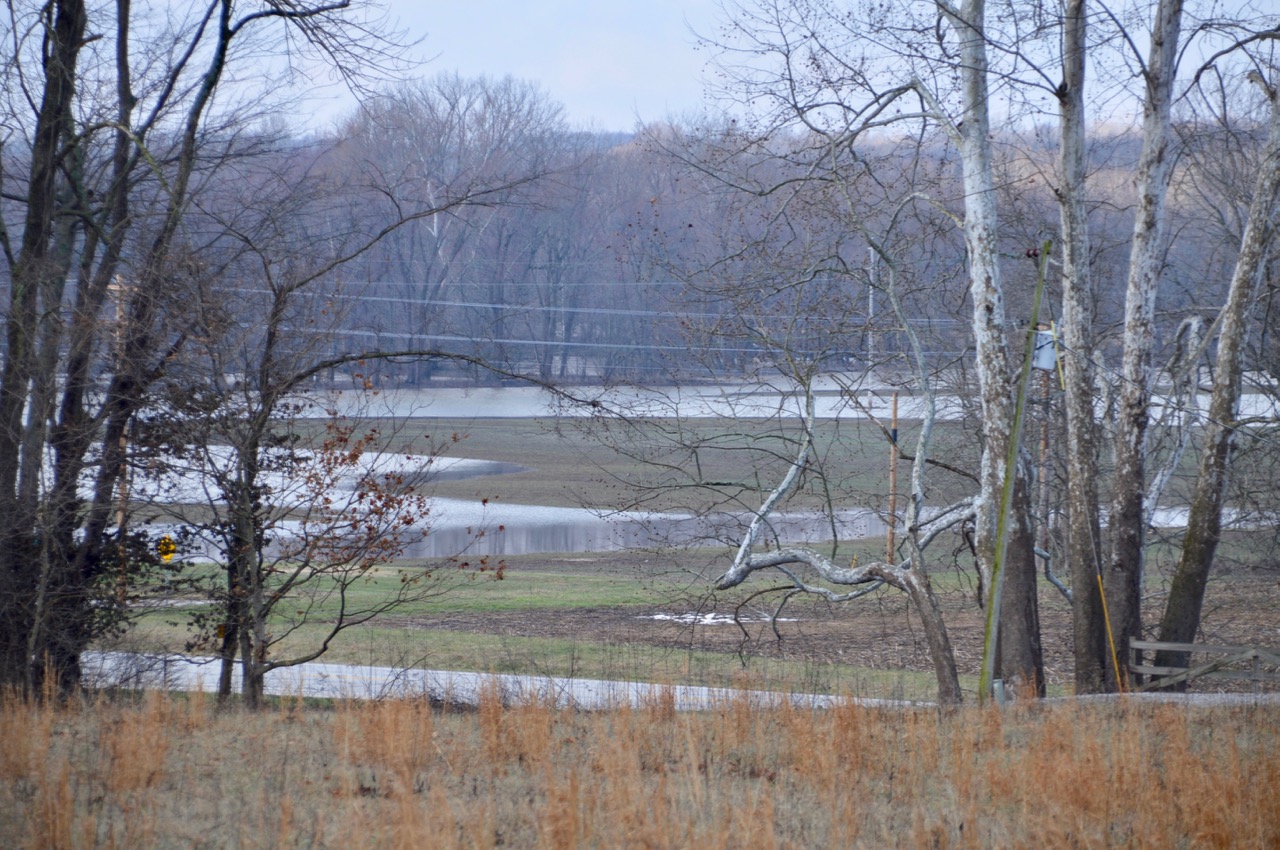 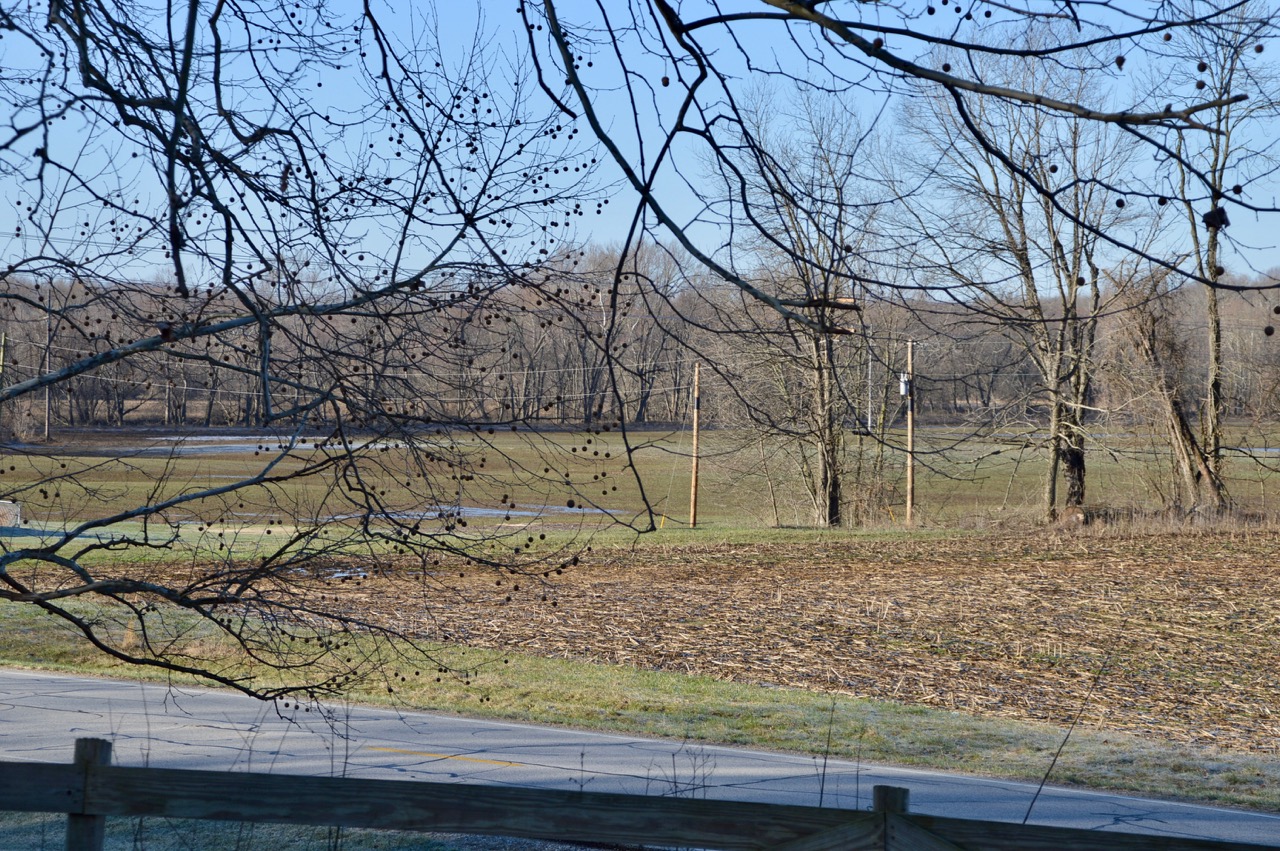 By the time I hit hit the path, Sadie and Stella were ahead of me and on their own pace. 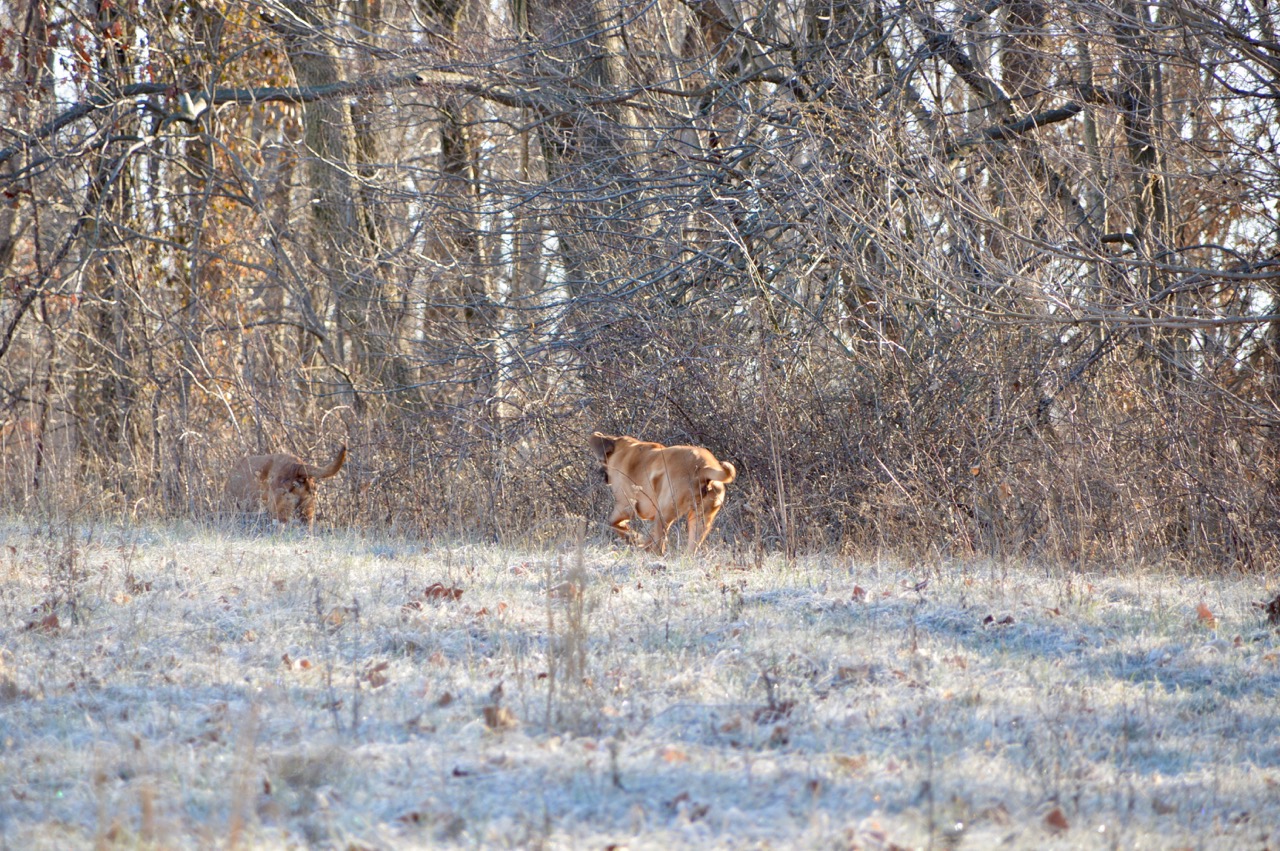 A lot of new scents for both of them to check out this morning, at 30°. 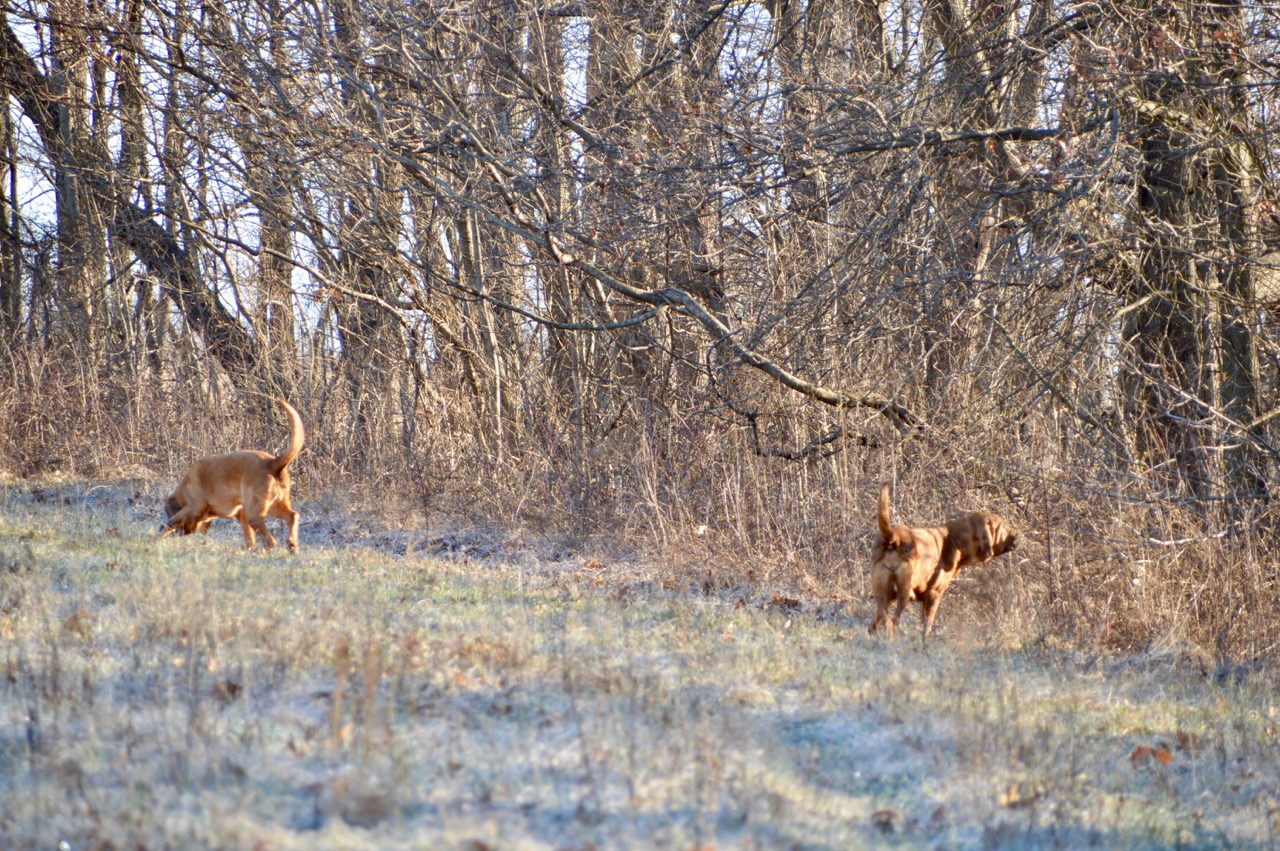 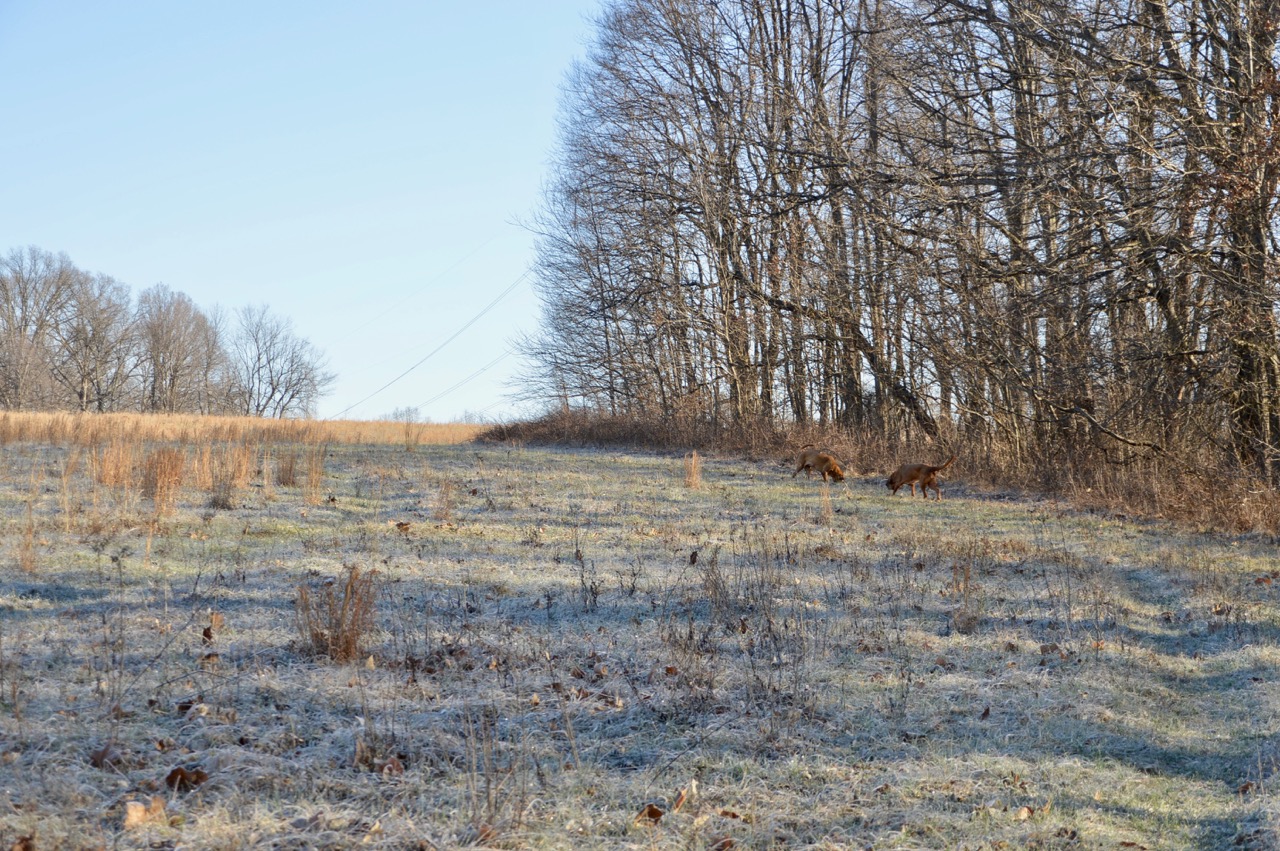 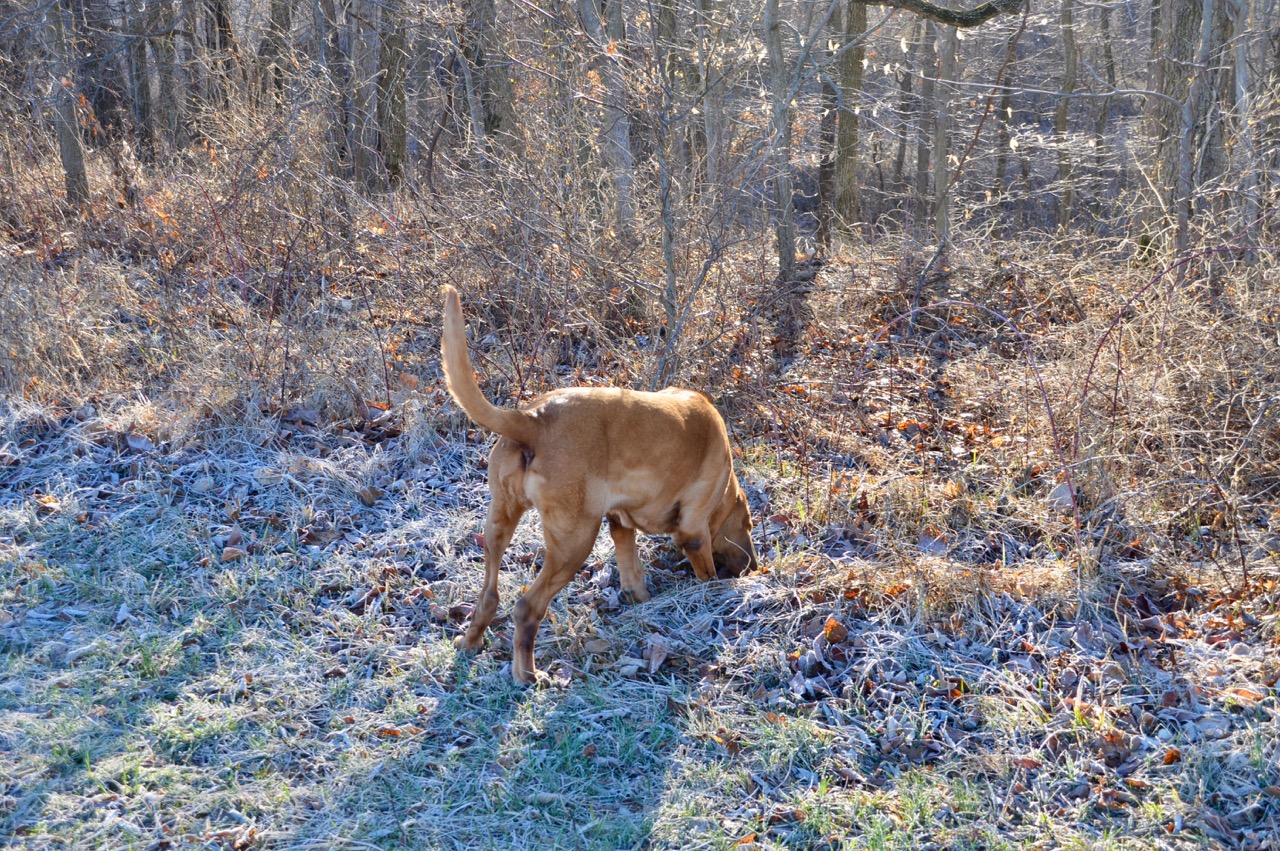 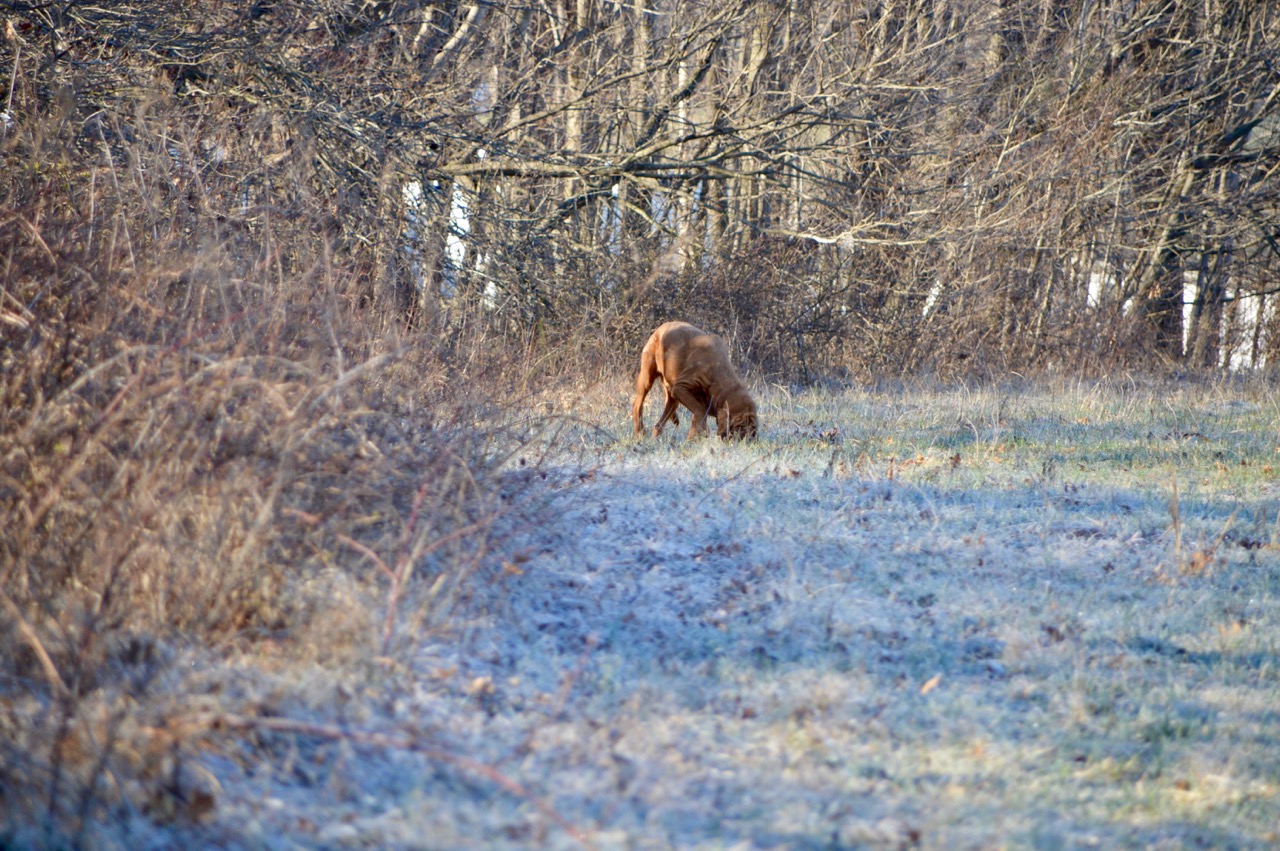 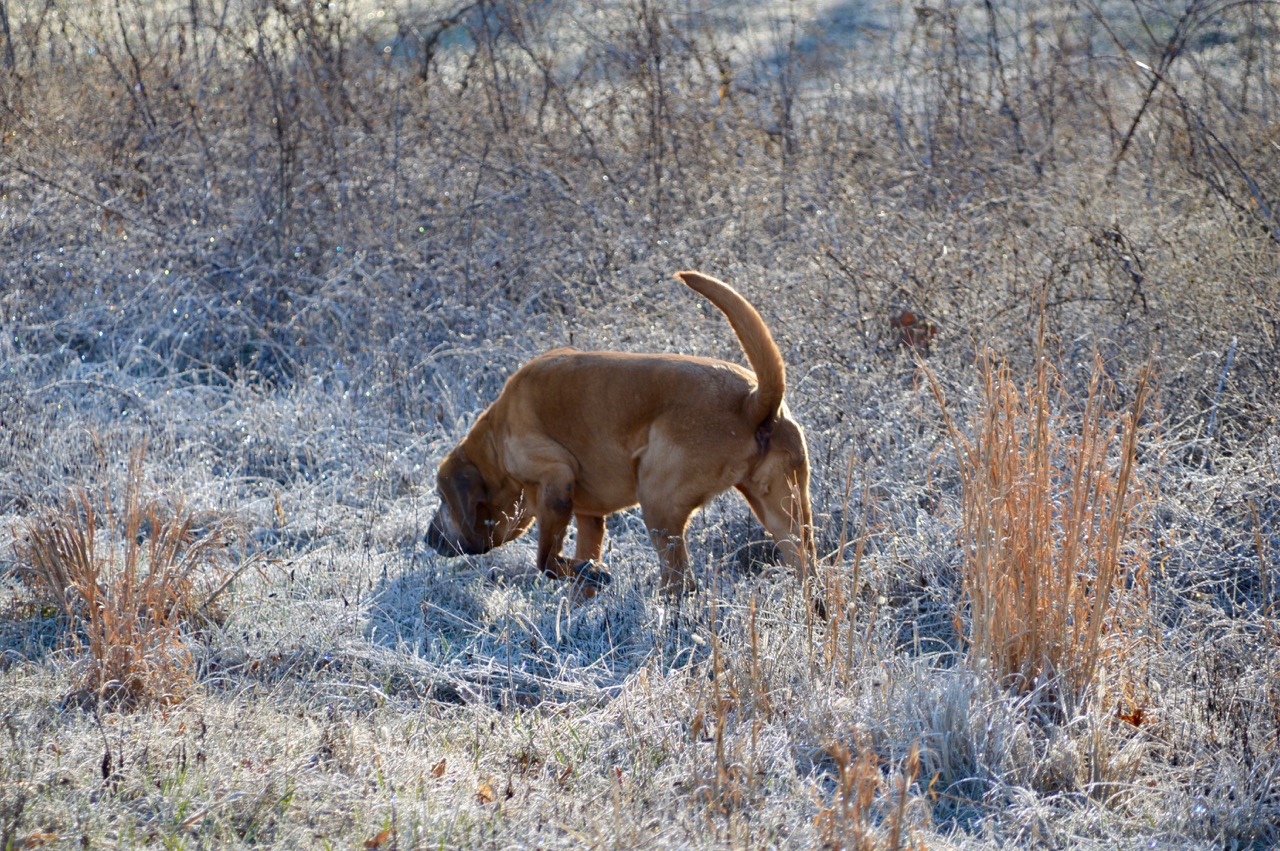 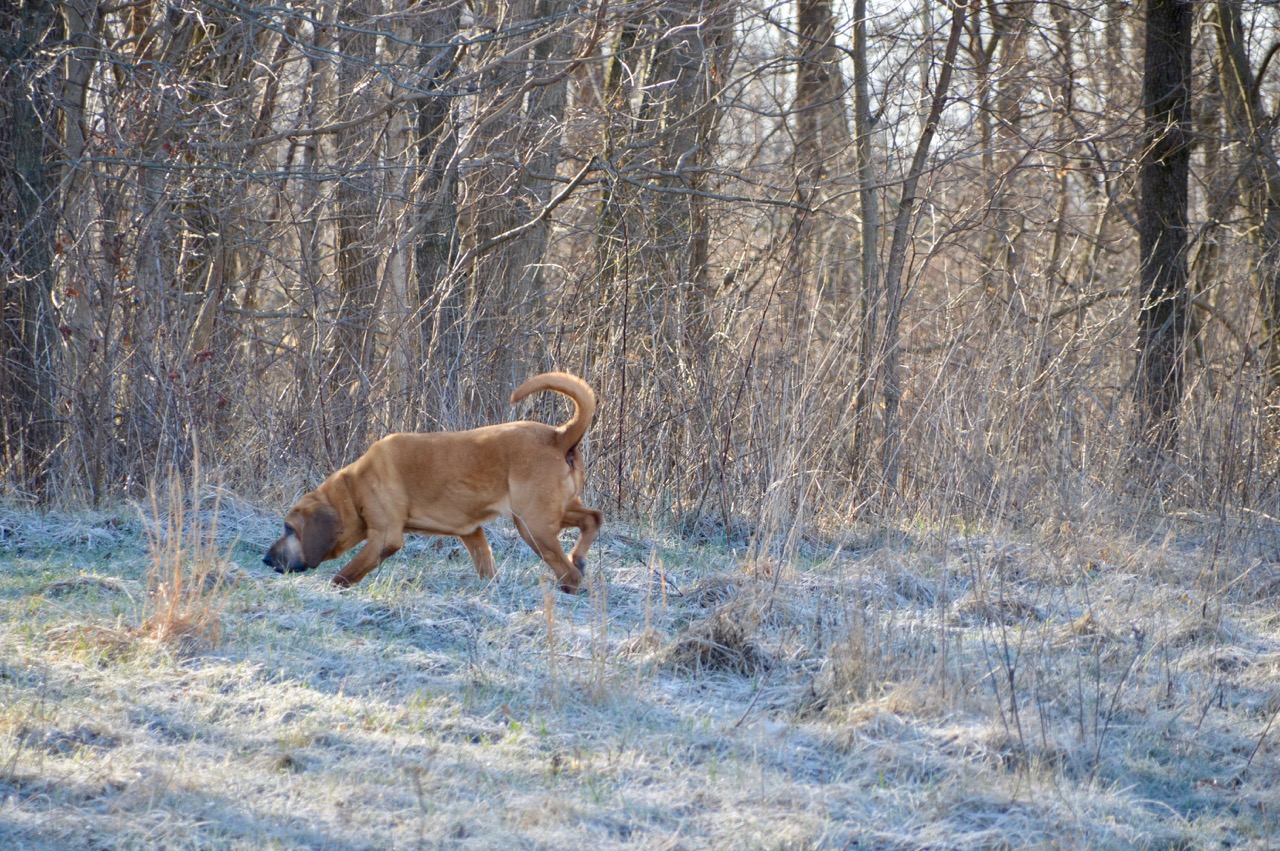 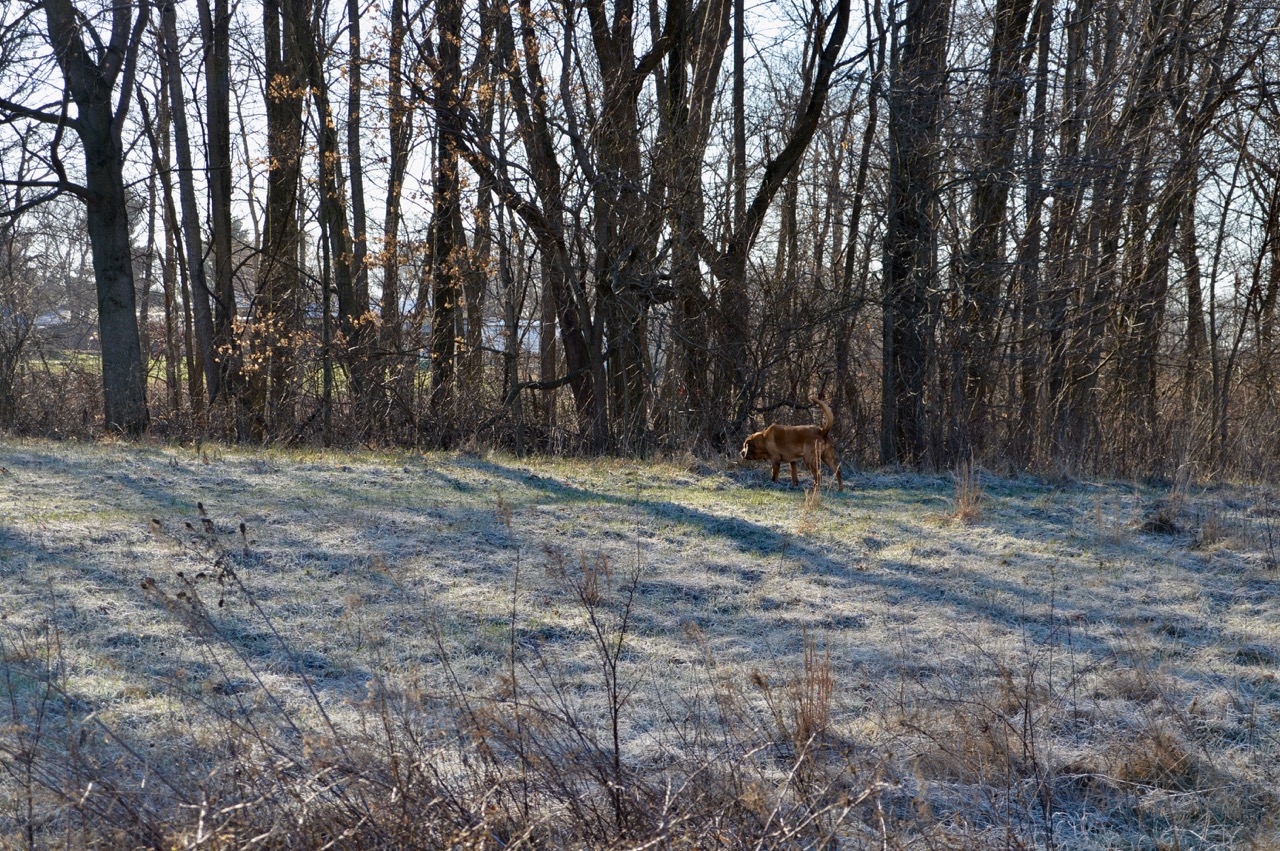 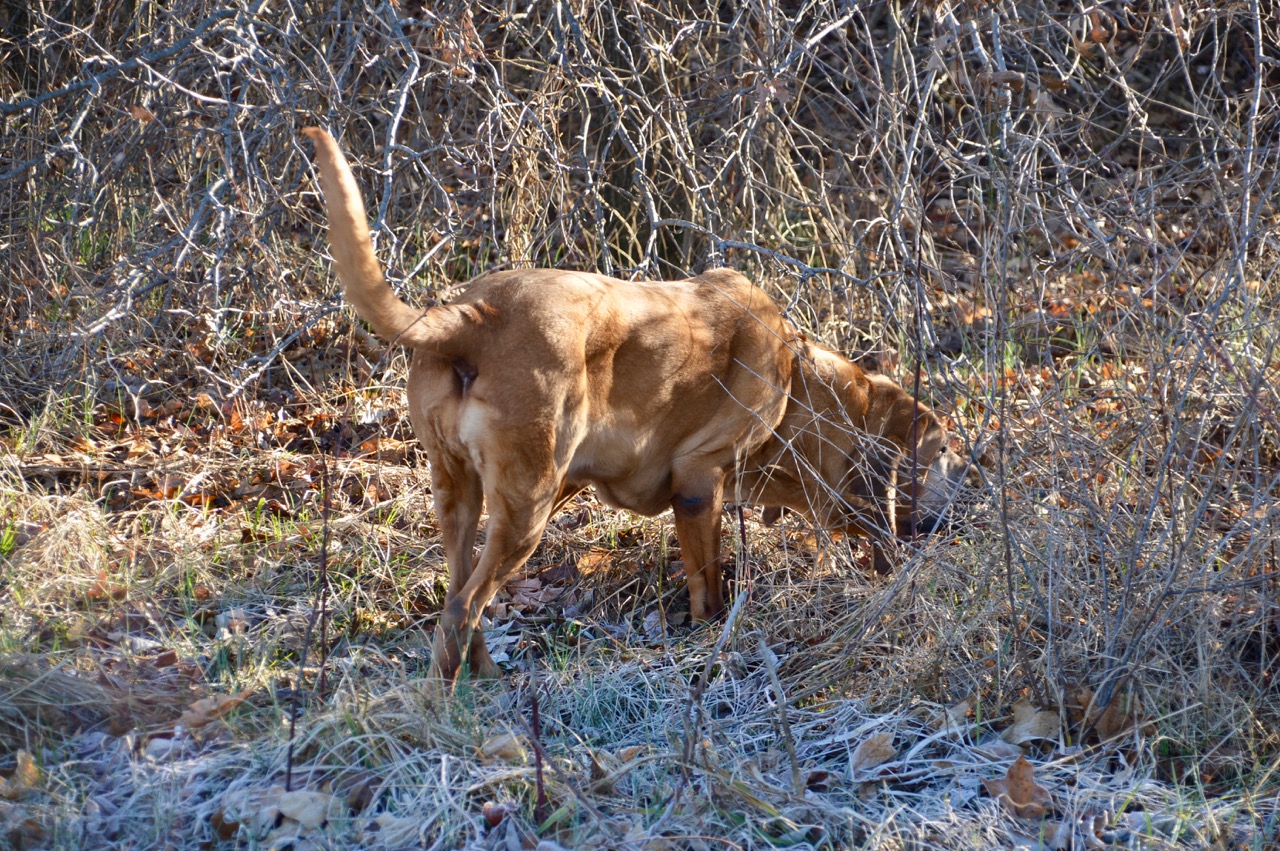 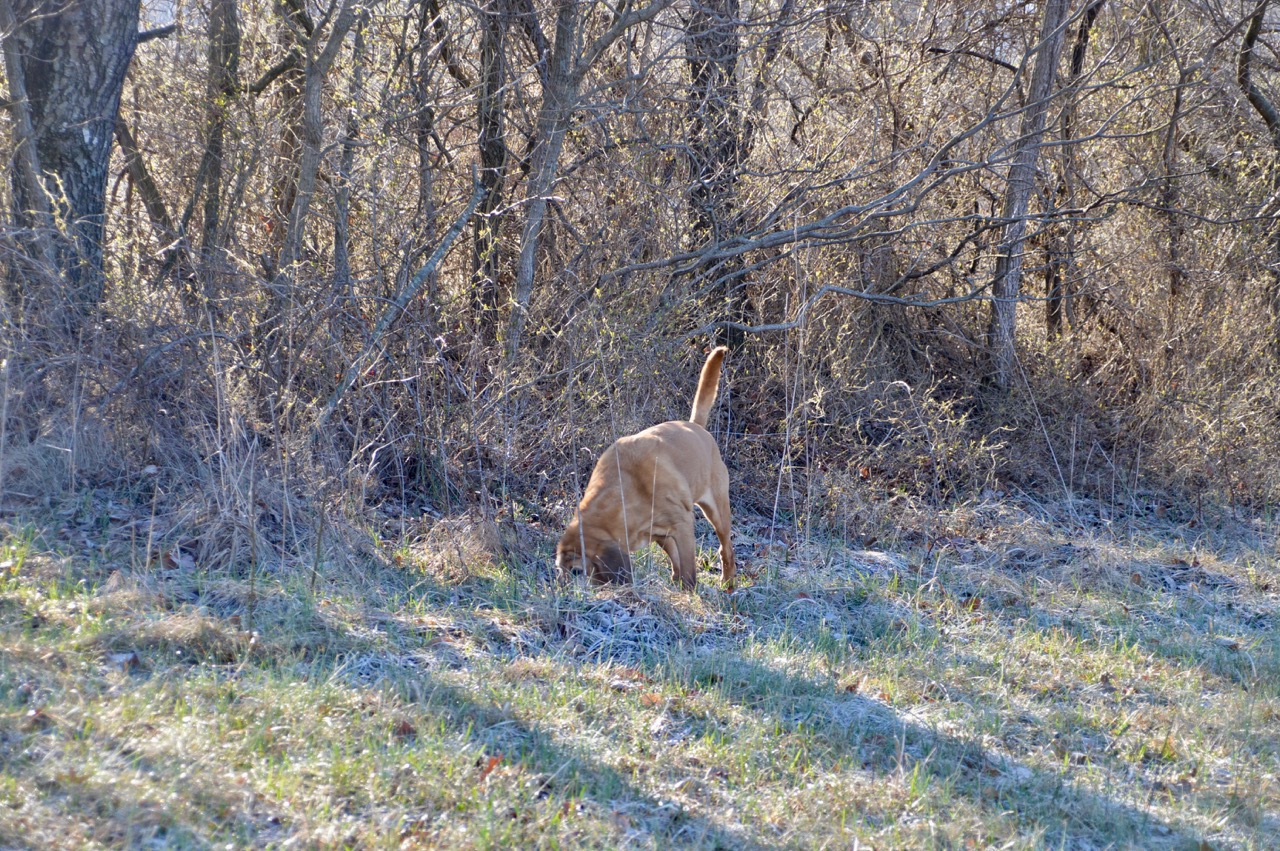 For some reason this week, Stella will come when I tell her 'over here' ... I've left her on her own while Sadie and I walk. She has not wandered off in quite a while. 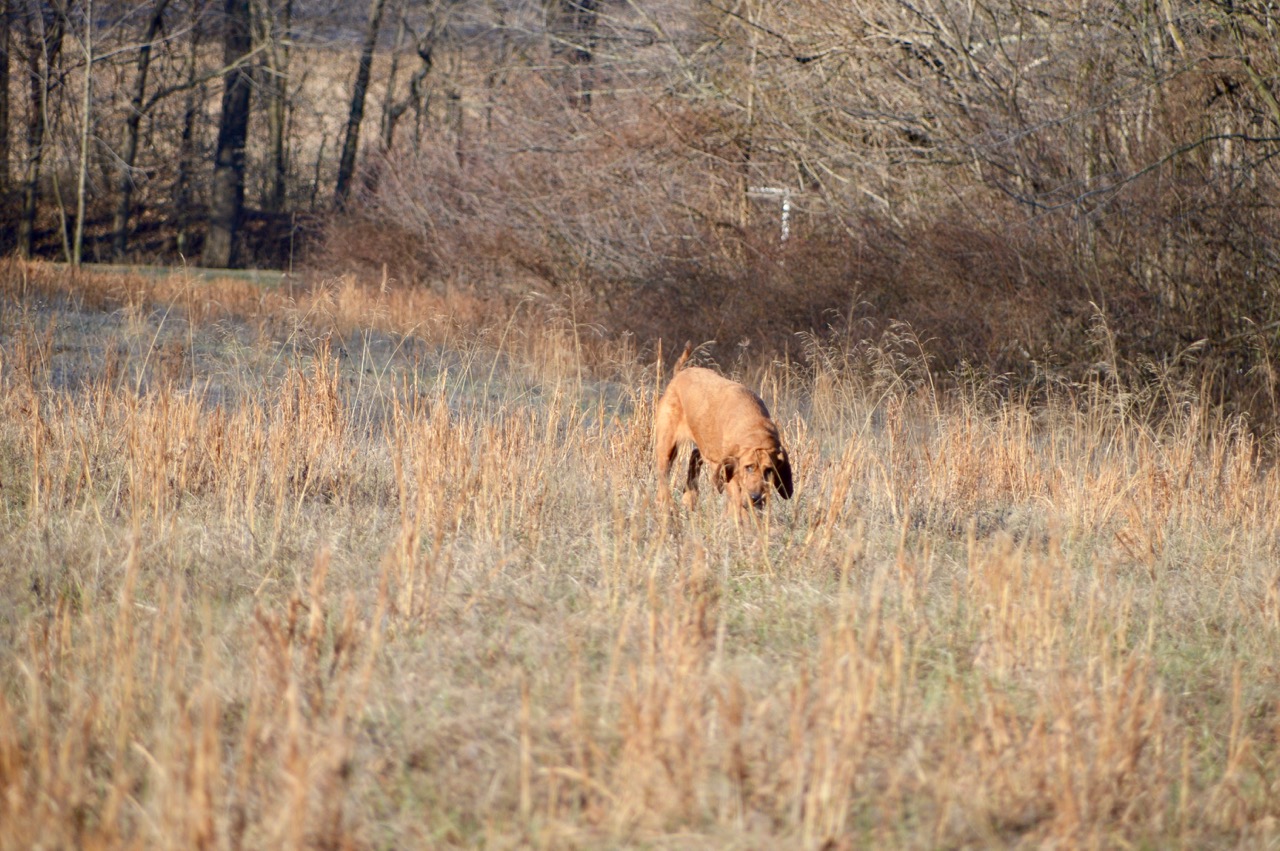 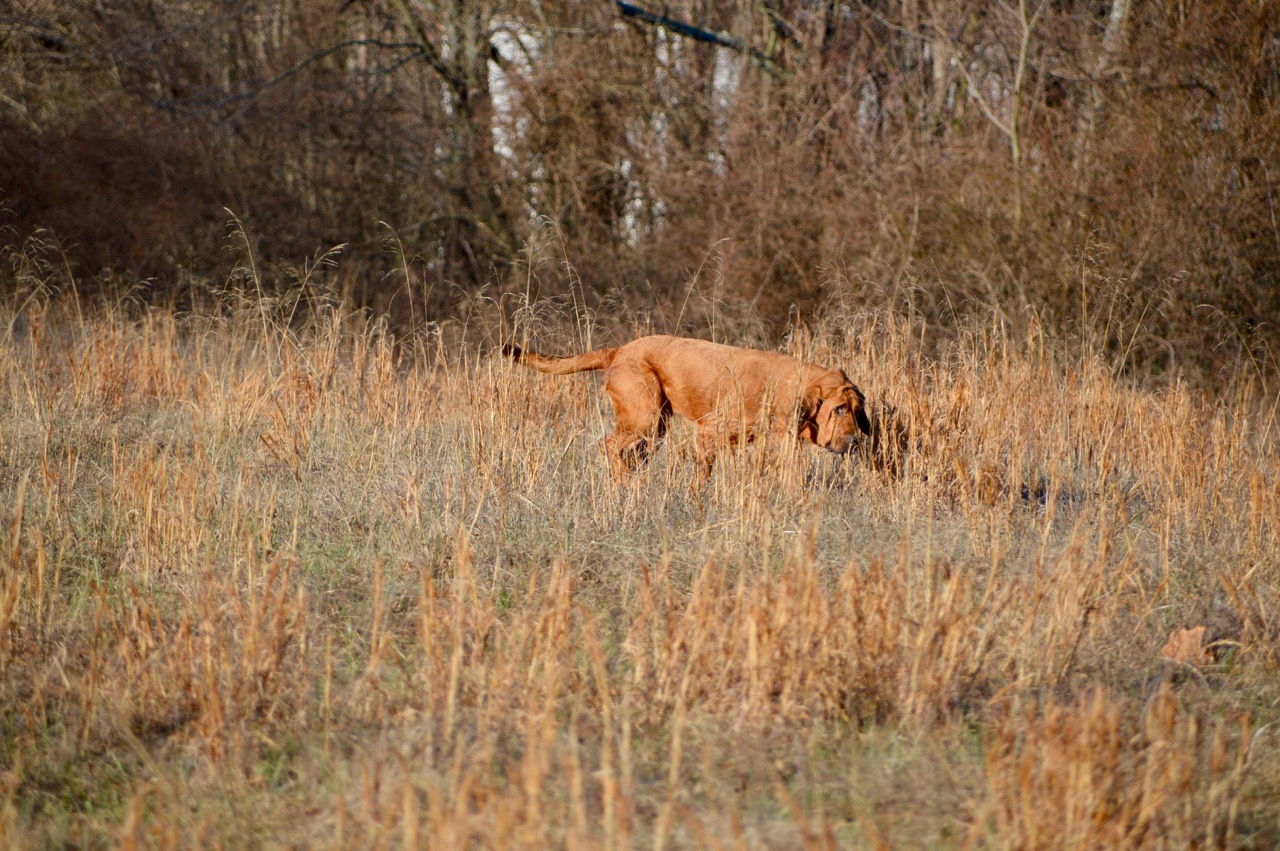 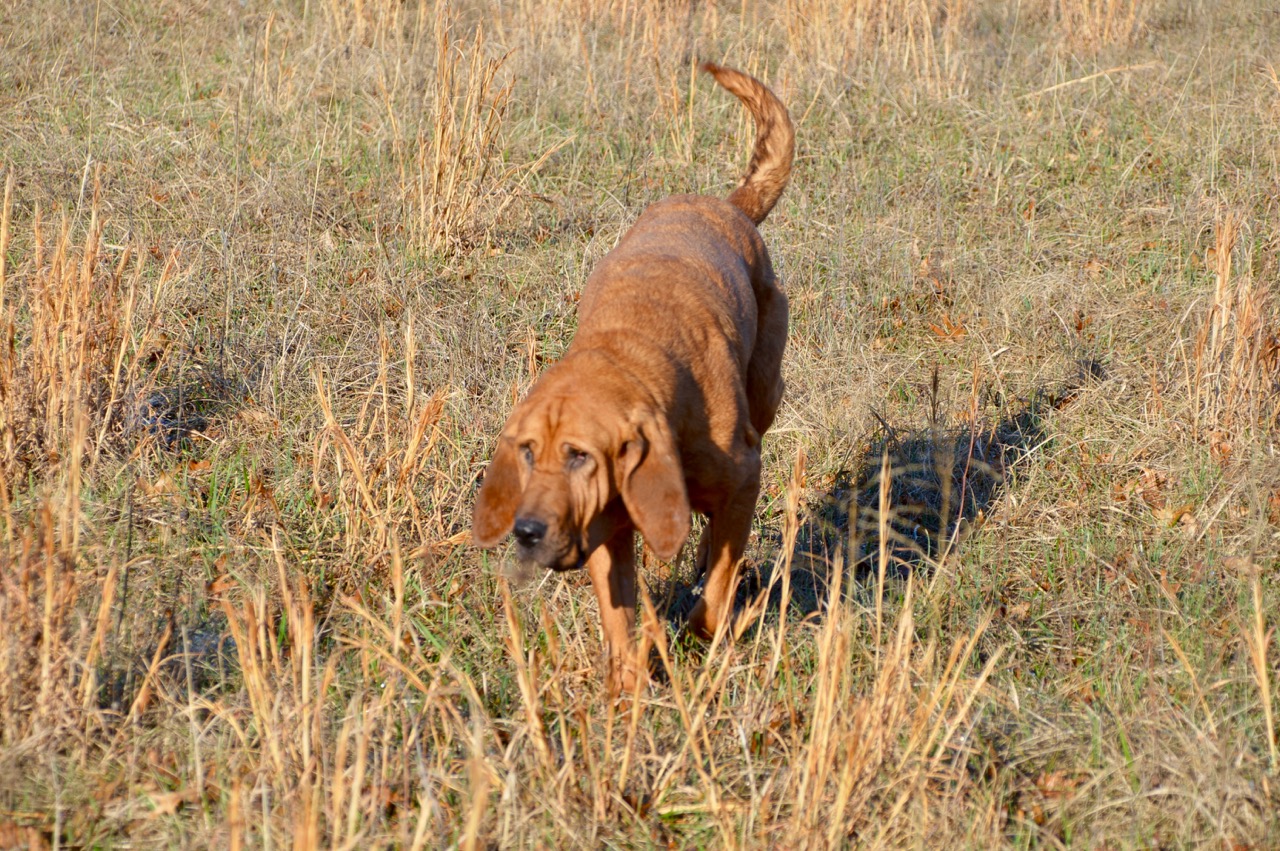 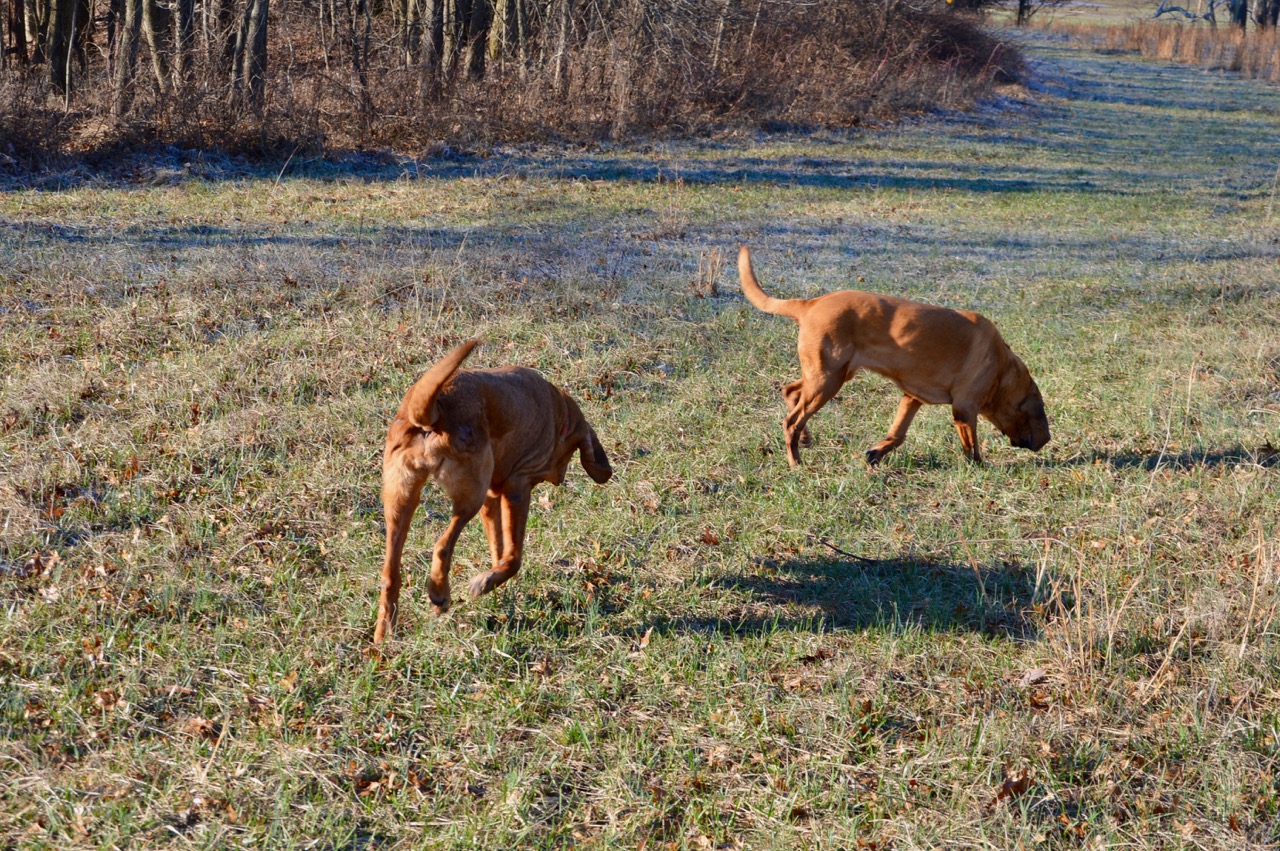 As long as it is not raining, we have been getting in a couple of walks per day. There was one day this week or was it last week ??? that Heidi walked out into the field with us and explored while the bloodhounds and I did the half mile walk. She actually trotted from the house to the field but my camera was back inside the house. 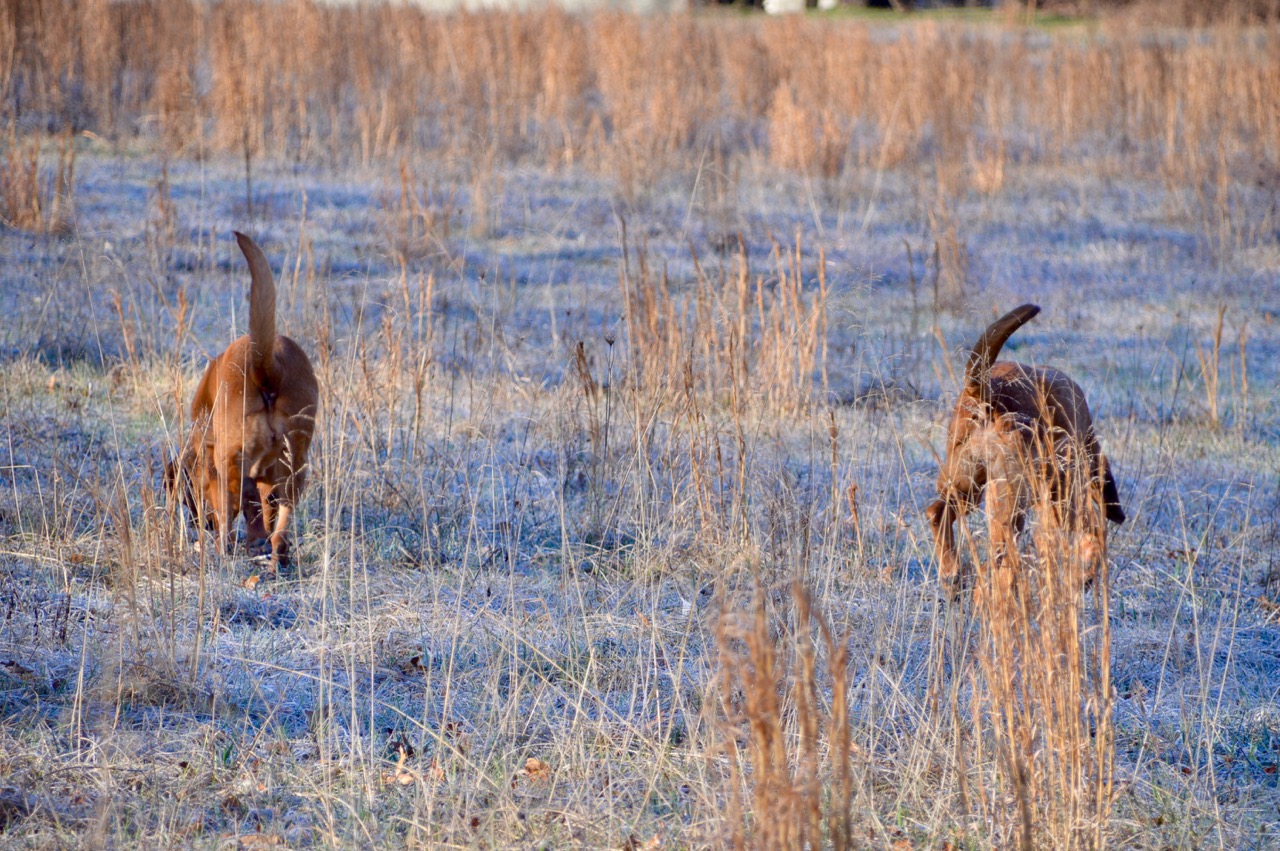 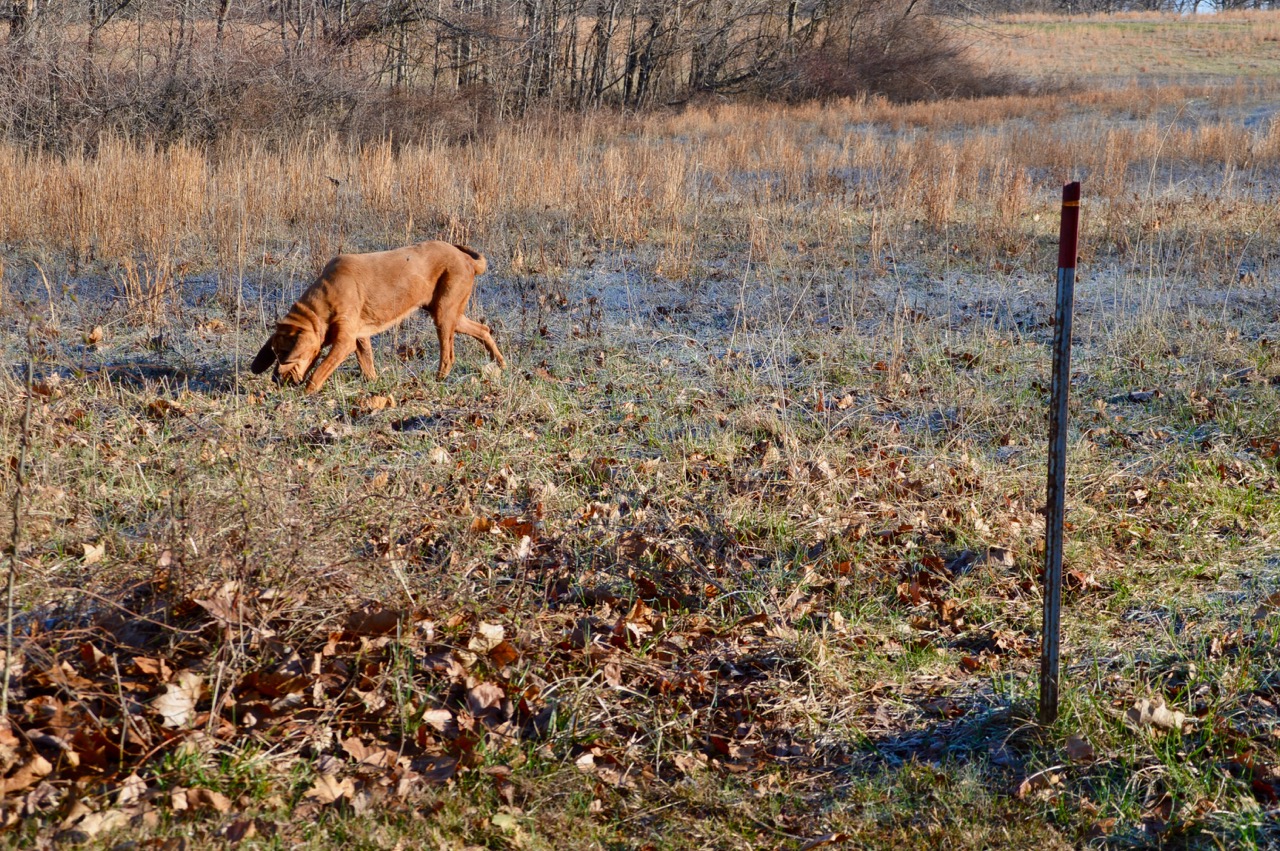 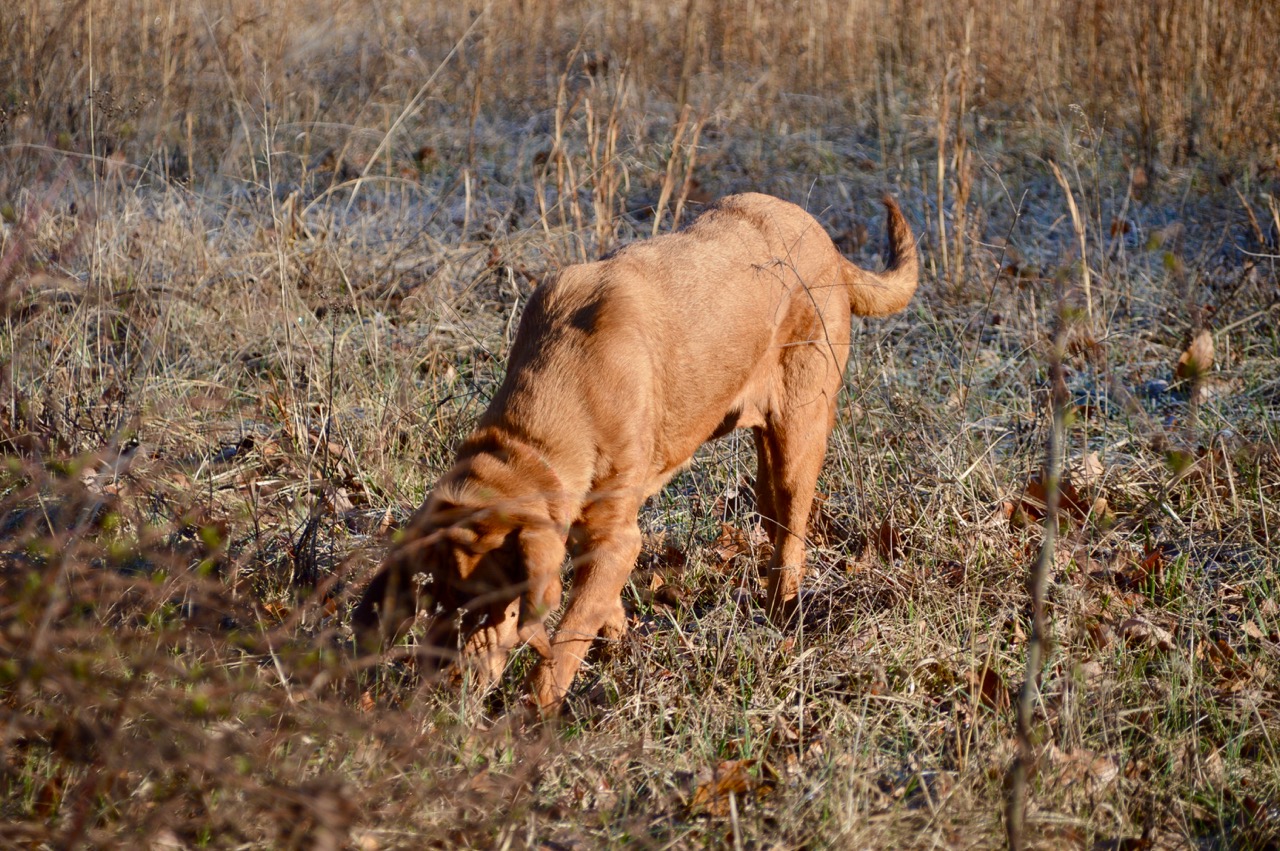 At least all of the rain, over 6" in 17 days, has turned the dormant winter lawn to green. I have a feeling I will be doing a lot of mowing this year but between the days of rain. Predictions of a 'wetter than normal' spring and summer will make things interesting. 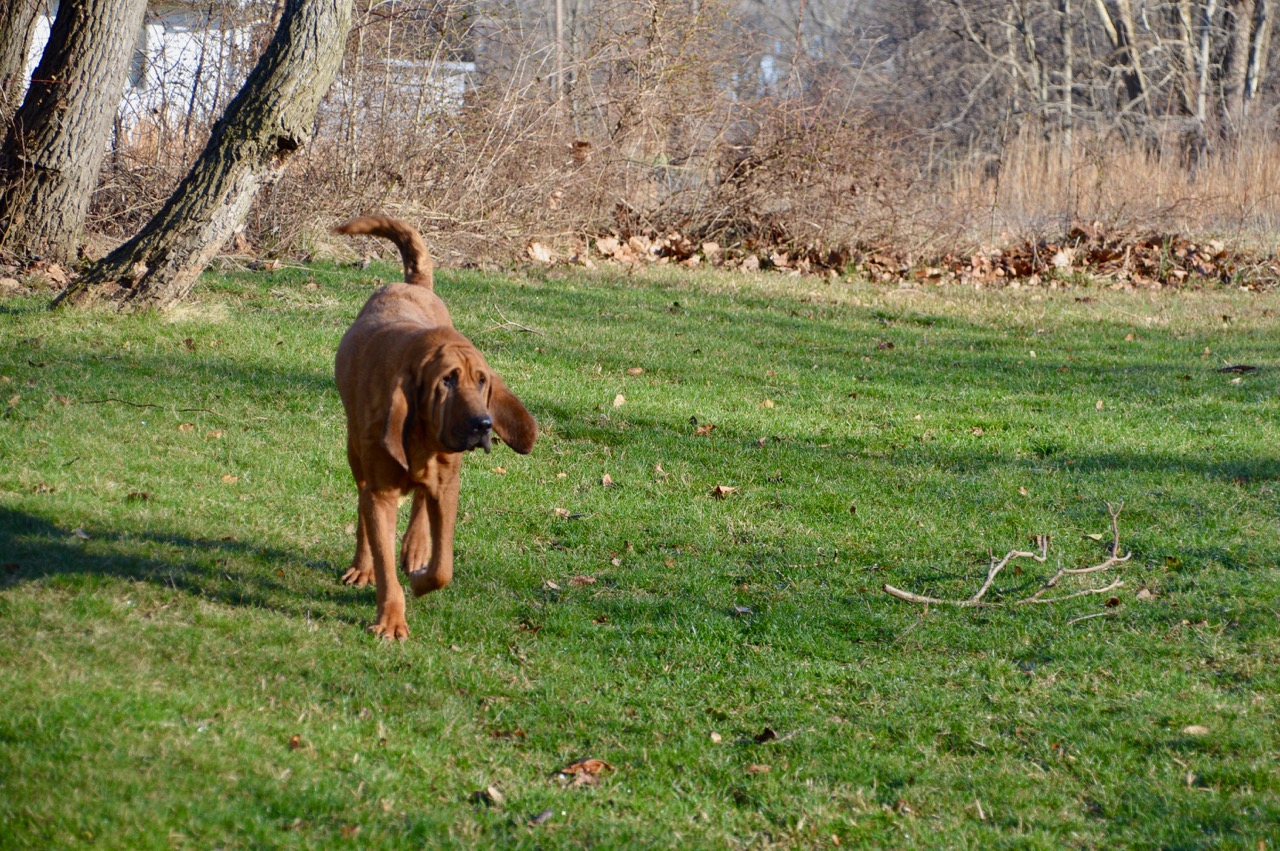 I guess the most excitement we have had recently was changing from Directv to Dish Network about 8 days ago. I did the normal cost analysis before making the decision since I would be breaking my contract and would have to pay extra to do that. I made a lot of calls to Directv to see what kind of 'retention' or 'loyalty' discounts they could give me as they did in past years. Of course anymore with their customer service shipped out overseas communication is harder to understand each year.

This may not be the same for everyone but what I say here pertains to only my experience.

I was told over and over there was nothing Directv could do as far as discounts ... for someone that had been with them since 1999, minus the 7 months I did switch to Dish Network due to contract negotiations with local channels on showing HD quality production. So basically I had been with them since they had bought out a company called Prime Star Satellite back around 1999.

The tipping point in my decision this time was when I received my bill and saw an increase because they were charging me for Regional Sports Network channels for the first time ever. After a google search on 'RSN' I found out not only what that charge was for but that Comcast Cable was being sued a few years ago for doing the exact same thing Directv was now doing with those charges.

I pinch pennies enough to know that I was not a happy Directv customer and the issues with understanding the customer service rep on the other end of the call continued to send me to the brink of insanity. Let's just say I had to call back a lot of times, spending hours on the phone, with no positive results.

So the option was to switch to Dish Network, getting those 3 free sports channels back plus a sports channel (Pac12) that would give me more college football games next fall and the same 200+ channels I had with Directv .... but .... with a 2-year price guarantee. It would be $20 per month cheaper until September then $43 cheaper per month after my final discount with Directv would expired.

After a cost analysis and seeing what my calls to Directv did to my heart rate ... I made the call early Monday morning to my local Satellite provider to make the change. They were there on Wednesday morning. Same installer that did the initial install plus installed my HughesNet Gen5 satellite internet system.

24 hours later Directv was giving me those "Come Back" discounts of $29 per month for the next 12 months ... all the same programming.

What kind of business plan is that? Losing a long time customer, telling me they could not offer anything in way of discounts .... UNTIL AFTER the account was closed?

So things are good. Good weather, bright sunny skies, MLB spring training games in the afternoons and a week or two away from March Madness ... the perfect time of year for a sports addict. And like offers for new customers for both Directv and Dish Network ... free movie channels for 3 months. One big plus this new HD DVR receiver will now download to an external hard drive. I will never have to transfer recorded movies and ballgames from a DVR to DVDs again.

The hounds are enjoying 'the tropics' of Southern Indiana.
at March 03, 2018