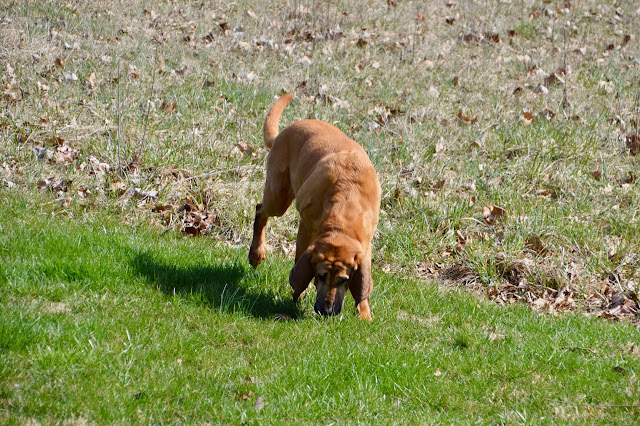 If you had been outside with the hounds and I just after 12 noon yesterday, you would have found it unbelievable what we saw an hour before sundown. With the temps near 50° it was good to see the 5-day forecast was right on track for warmer temps by Thursday and the thoughts of Spring could be right around the corner. 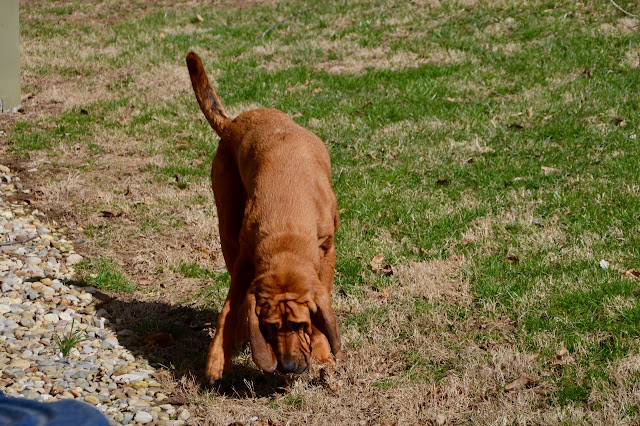 With the warm weather, we fit in 3 different hound walks yesterday with the last two without the camera and Stella on the 25' retractable leash. I could feel the warmth of the sun but as we walked further the wind that was blowing was extremely cold ... what was happening? 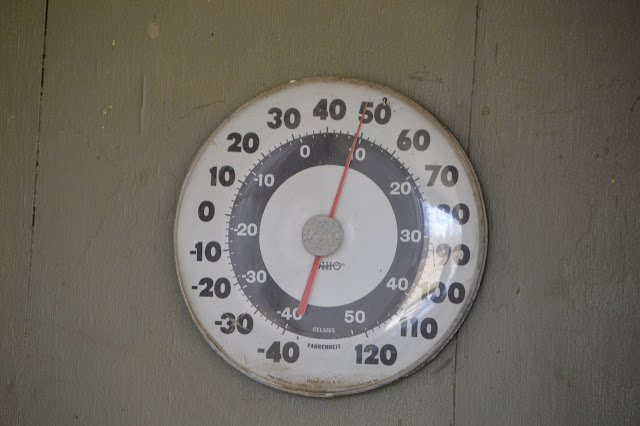 Sitting on the couch later, watching tv and catching up on all the millions of dollars spent on NFL free agent players yesterday, I glanced out the window and saw blizzard like snow, blowing sideways and coming down hard. It was just 50° a few hours ago !!! Those big flakes were sticking to the ground also ... strange stuff. 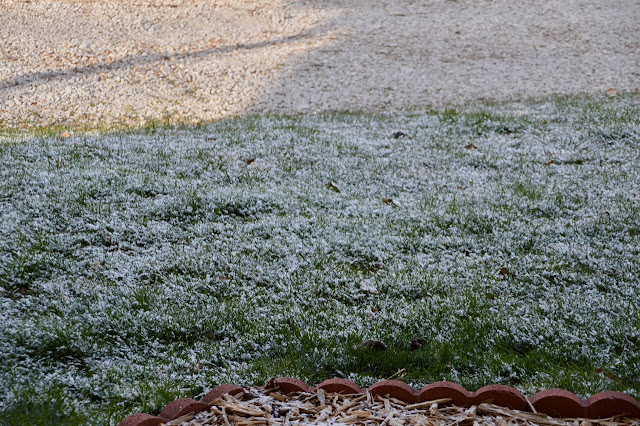 So this morning the hounds and I finally started the walk a little later than normal after realizing it wasn't going to get any warmer than it was, 24°. As you see there is snow barely covering the yard and field. Yet the bright sunshine made all the difference in the world on the walk. 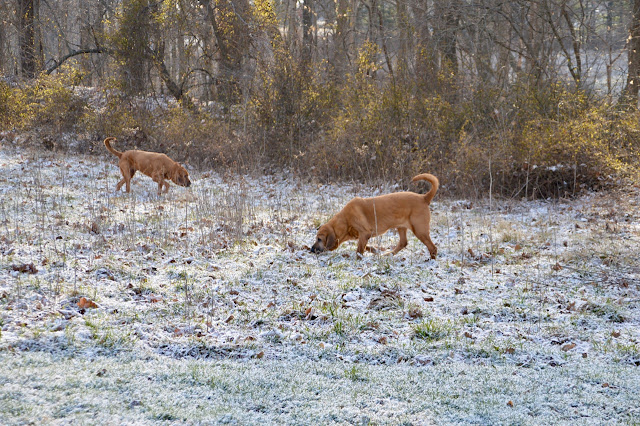 These recent freezing temps have led me back to Realtor dot com, looking at houses in Southern Arizona instead of New Mexico. I don't want to be cold anytime of year ... is that possible anymore?  I had been looking at houses out west hard starting around January 20th. I even called a realtor "out there" and had a local agent stop by my house to take a look. I had a few favorites 'saved' but in the past two weeks two of my top three have sold.

So this morning over a couple of cups of coffee I took another look at the small towns I had looked at before. An even trade for what I would get for my house (not much) is not possible out west even in very small towns, without buying a 'fixer upper'. Those results have been the same for the past 8 years where I have looked at housing off and on. 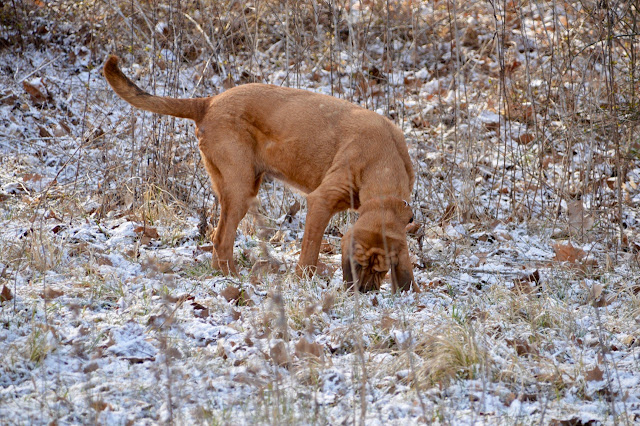 Some say I am crazy wanting to sell a house I own and move to a different house in a different location that would come with some kind of mortgage. Other people remind me that it would be worth the mortgage payment in exchange of better weather. One tells me as long as I can afford a mortgage then there is nothing wrong having a mortgage after you have retired.

Although it wasn't the houses that was interesting this morning though ... something had already been walking down our path leaving prints of some kind barely visible. I kept trying to see if they were deer hoofs or something else. It looked more like a dog paw in size but nothing was distinct enough to tell me what it was. 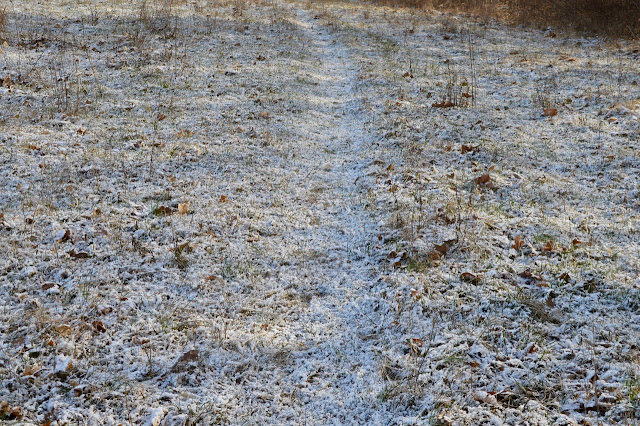 The seemed too close apart for deer tracks. 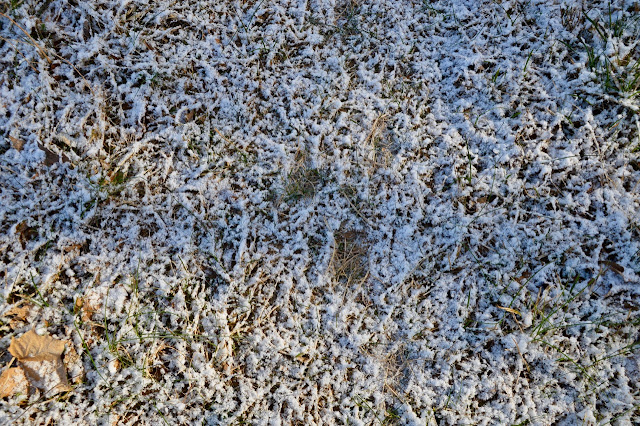 Sadie and Stella were behind me and the prints on the path. Evidently the freezing weather created a lot of deer traffic earlier this morning before dawn. 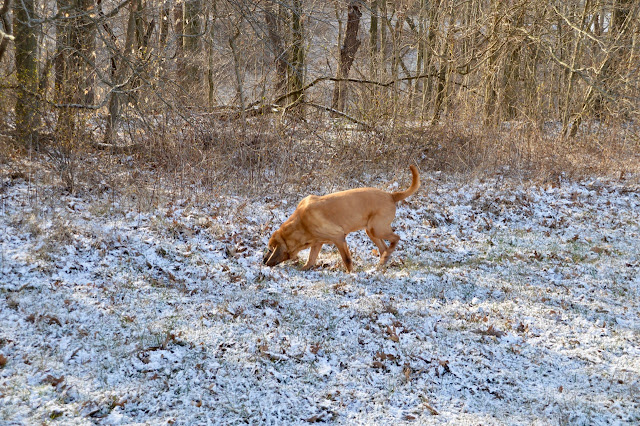 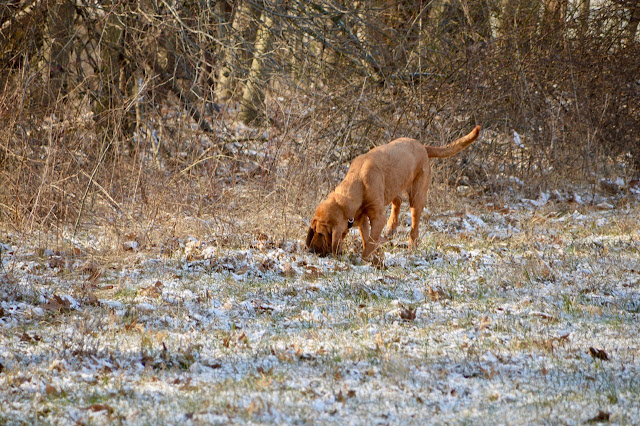 As usual I was letting Stella do her own thing but was a little concerned that soon after I took the picture of her, I glanced back in her direction and she was out of sight. She has done that before but seems to show up within 30 minutes after Sadie and I finish our walk or while Sadie and I are finishing our walk. I was hoping she would show up today before we got back to the house. 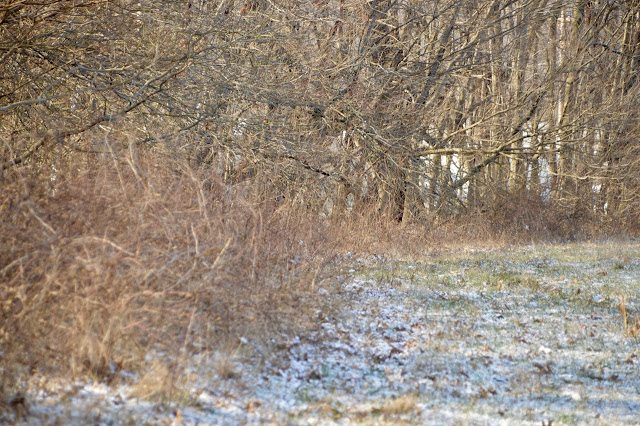 The snow brings out the paths the deer take down into the gully. During the summer those paths will be evident by mashed down brush. 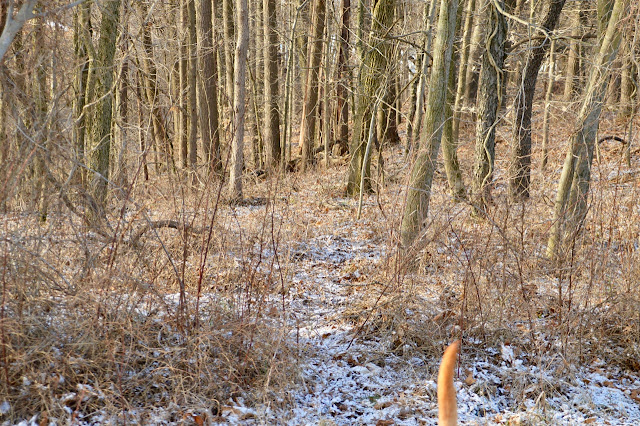 The idea of moving has always been a hard one for me to figure out. I've been here 20 years, moving in about this same time in March. It was much warmer the day we moved in and the week after seemed like summer based on the photos I glanced through the other day. With the inability to make a decision, I take that as ... I should stay here until I know something more definite.

But when that Apple iPhone weather app shows me at 24° and a few western towns I have listed in the 60's and 70's it seems like a pretty easy decision. 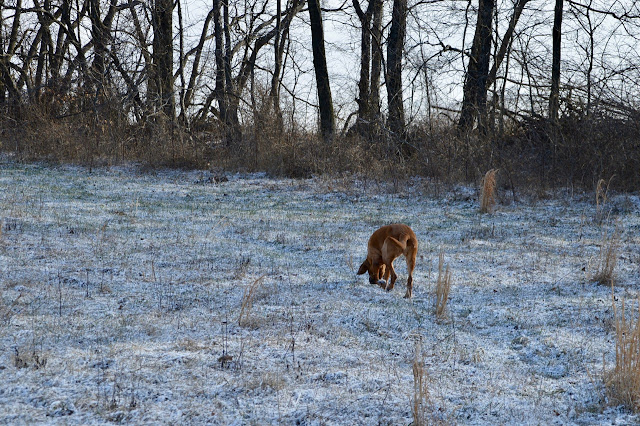 Walking back I thought I saw some kind of movement up ahead but it's always hard to tell because I don't wear my glasses on the walks. I was happy to see Stella heading across the field to the other woods ... I was pretty sure she was tracking those same prints I had seen veer from the path in that direction. 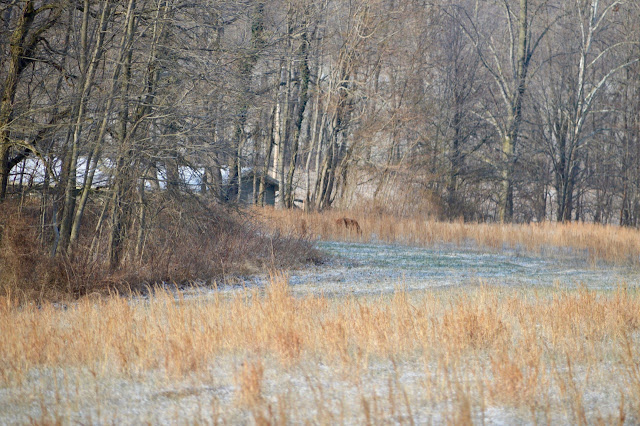 Luckily with little wind ... it was just cold but not freezing. 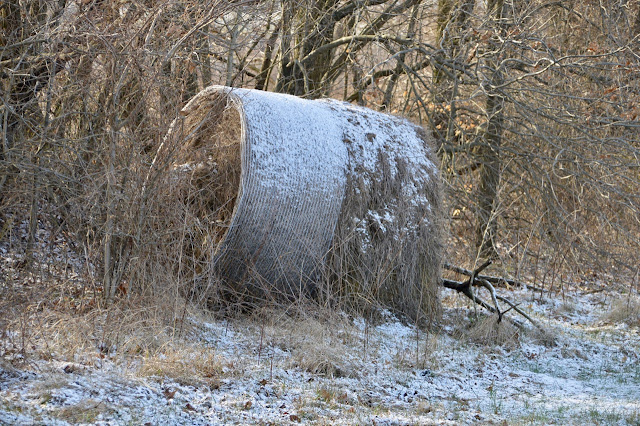 The photo doesn't show it but Stella is moving at a fast pace with her head down and heading toward the woods behind the neighbors house. I thought I'd yell her name and see what she would do. 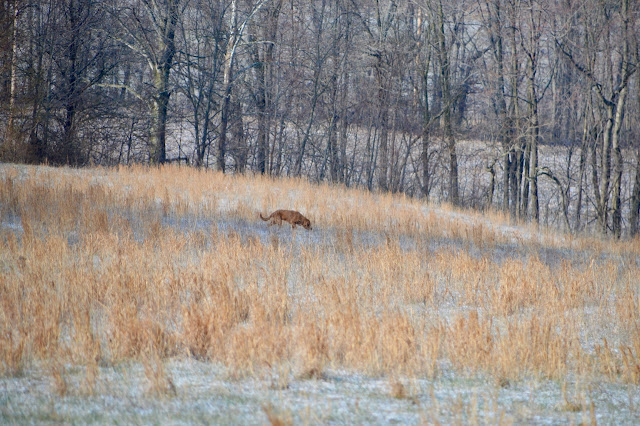 She was faster than my camera shutter as she stopped and looked right at me, then turned around and started walking toward our path. These photos are taken at 200mm zoom so we are still pretty far apart. 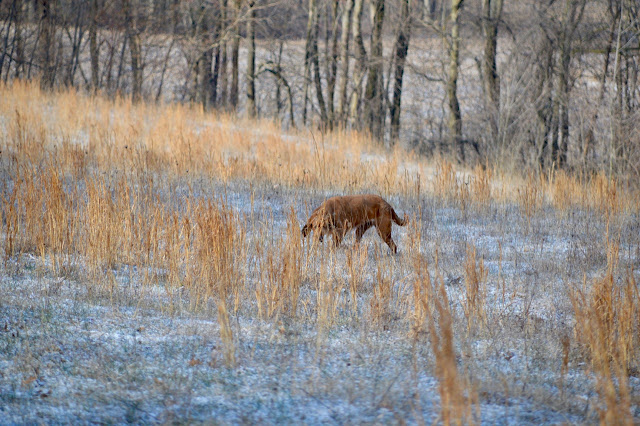 Once on the path she strolled toward me to nudge my knee with her nose letting me know she was ready to head home. I wonder what her new routine will be a few weeks from now? 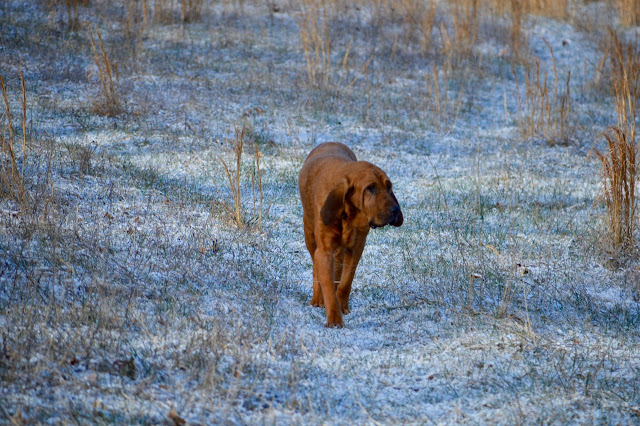 I can't explain my sudden urge to blog two days in a row. I have no idea if it will continue, we will see.

A reader told me this morning by commenting on yesterday's post, that he could read my blog but could not see my blog images on his computer, tablet or phone. Anyone else have trouble like that? For him, every image has that triangle with an error symbol. I have no idea why the blog shows up like that so I'll do some google searching and see what I come up with.

If any of you know why that happens, leave a comment so we can see if he or I can fix it.

Maybe I am hesitant to sell my house because I would have to keep it 'immaculate' for showing prospective buyers instead of the 'lived in' look?

Tom .... I've decided on this post to leave the images in the smaller size that Google Blogger compresses them and see if that makes a difference to you.