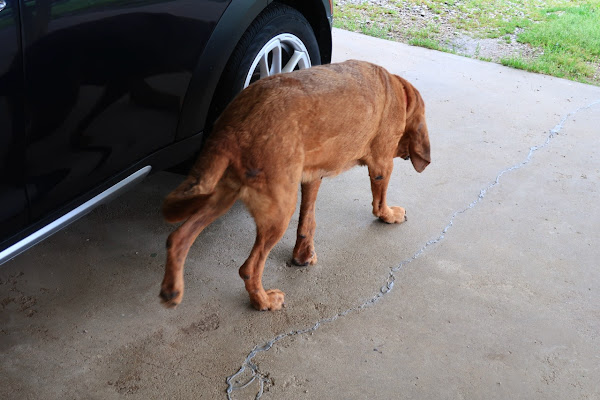 Up too late makes a late start to the following morning. It didn't matter though because we couldn't see that well until a few hours passed. At first Stella would not even go out and turned around inside the house. Later she decided it was time to head out for her morning walk. Since it had been raining last night, she took 'her wet field route' and didn't wait for me. 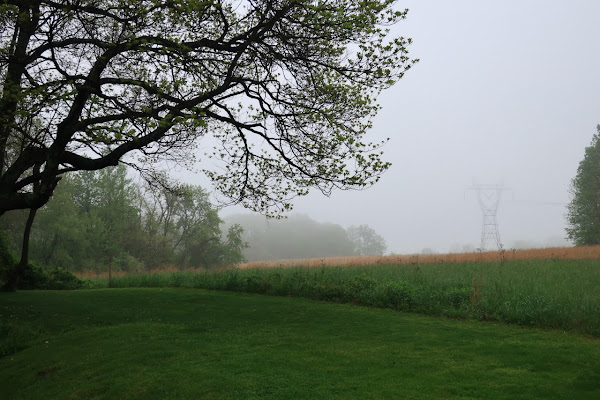 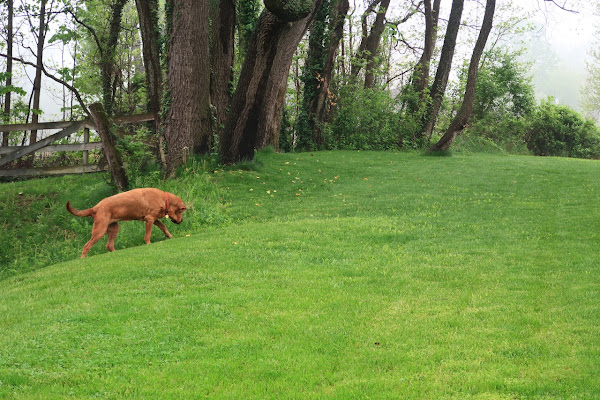 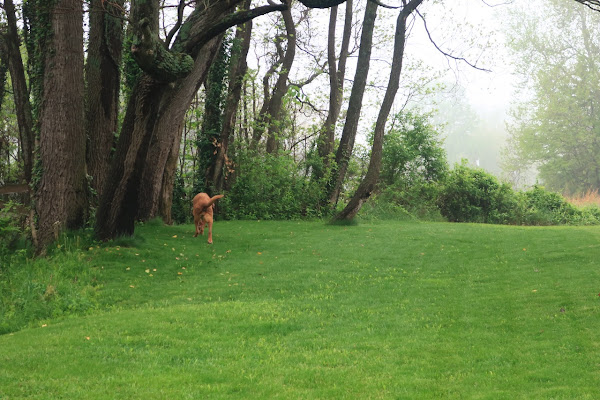 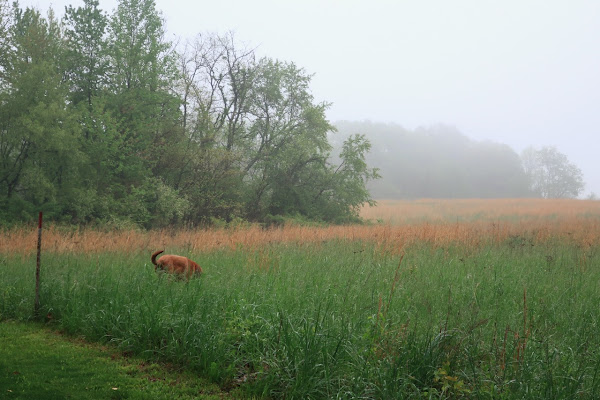 Due to the misty air I wore a light rain jacket but that didn't keep my cargo shorts from getting drenched with the tall wet grass. Stella's face and ears were soaked within ten feet inside the field. 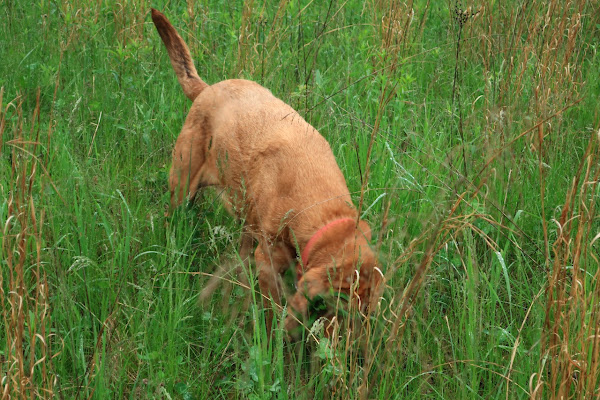 Sometimes though you just have to sit and think for a while. I didn't say a word to her today and let her dictate the pace and direction of the walk. 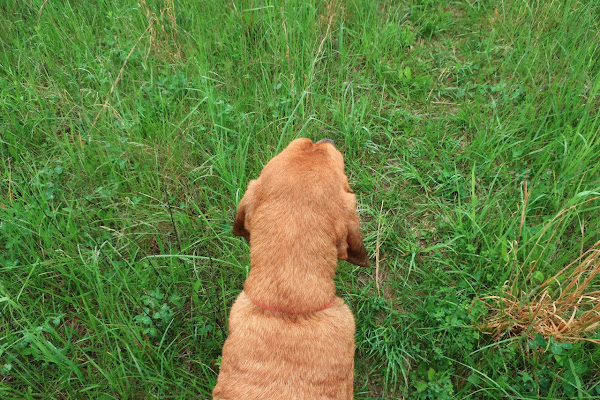 No sounds, no sightings of dogs, cats, deer, or people yet she had to study what she was smelling off in the distance next door 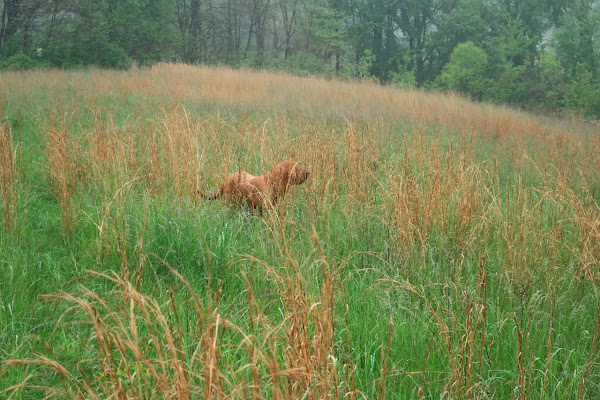 At first I thought I might be tracking through the wet field after her but she suddenly turned and headed back on the path. I could tell she was pretty relaxed this morning. That is saying something since she is always in a relaxed state of mind until any kind of food is involved. 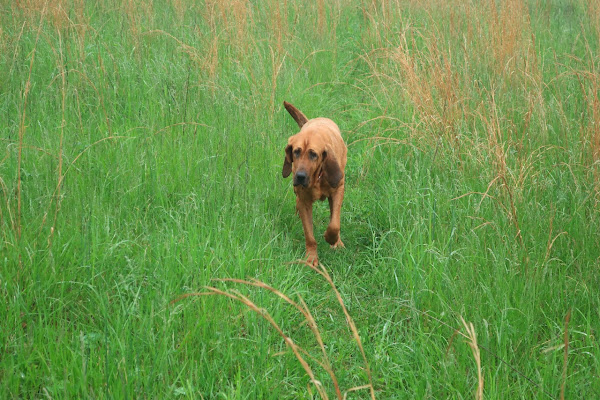 Since she started by walking on the return path, she likes to cut over to the regular outgoing path right at the corner of the woods. Smart bloodhound. 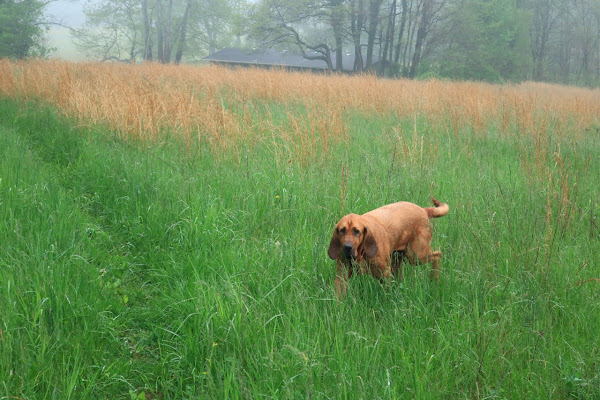 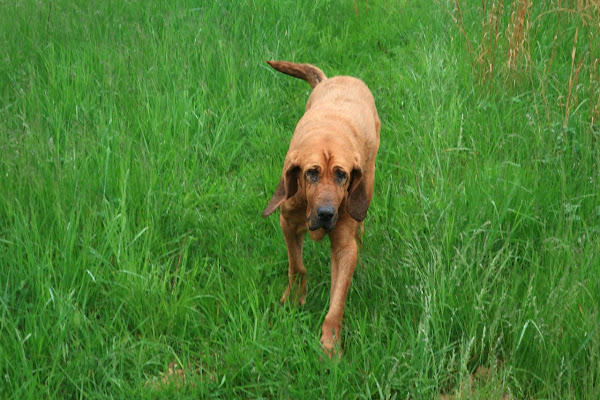 The path was sloppy with all the rain yesterday and Wednesday, I could hear my boots splashing water sometimes but Stella kept a pretty even pace on this walk. All the deer scat must have been washed away.  :)\ 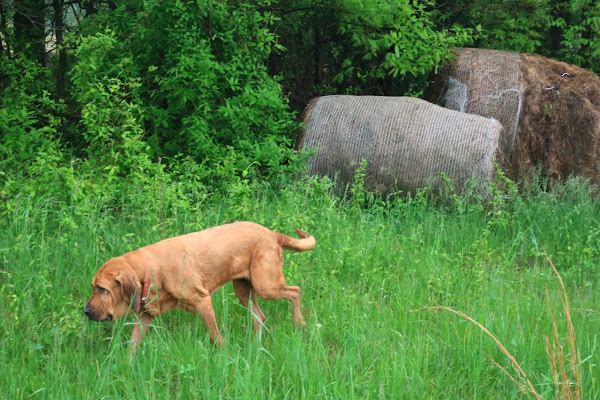 No signs of that AT&T tower this morning. 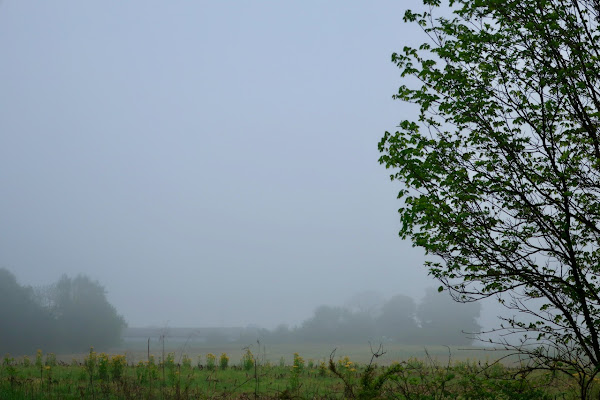 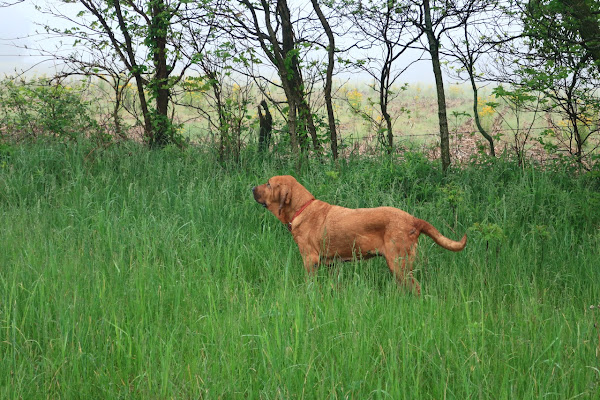 Then suddenly turns and heads for home. 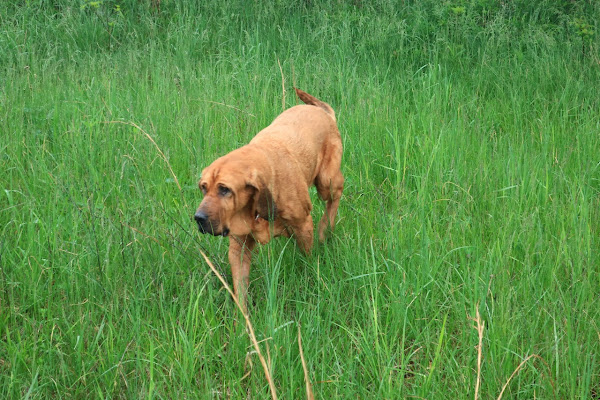 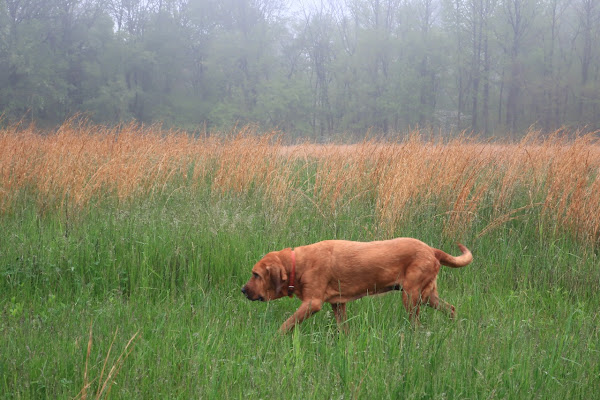 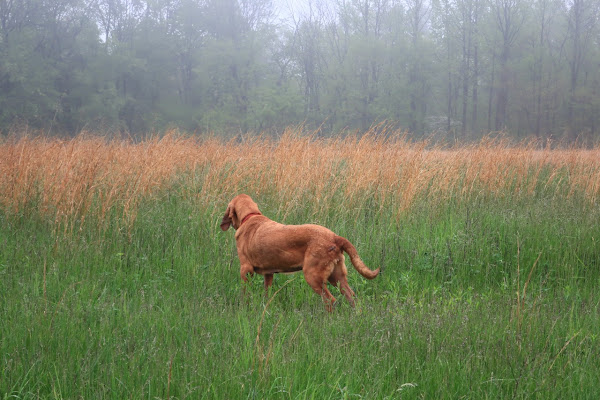 Anytime I walked in front of her to get some photos from the other end of her, she would walk back in front of me and then slow down, way down. I think that is her favorite thing to do on these walks. 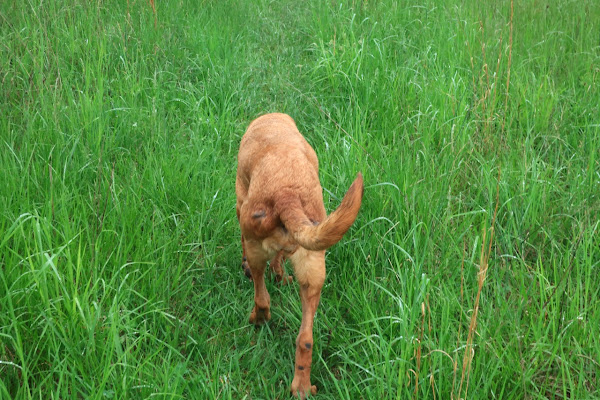 Does she hear someone? Smell something? I could see nothing in the direction she is looking. 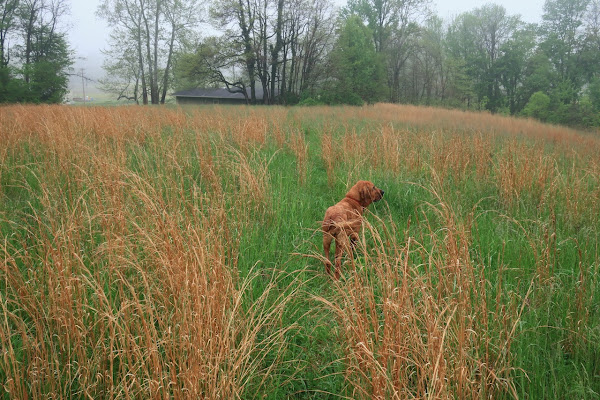 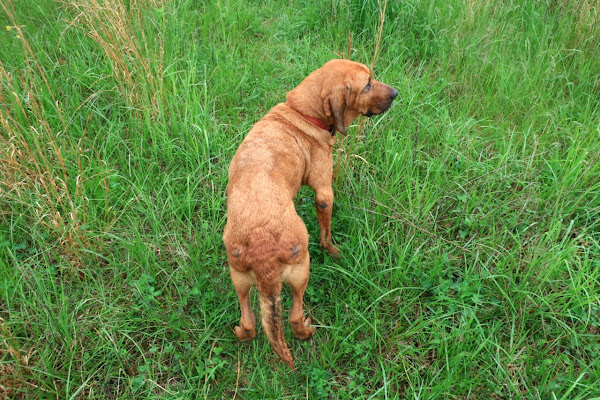 Another walk is complete. We are suppose to have a day of sunshine tomorrow and that will be a nice change of pace. 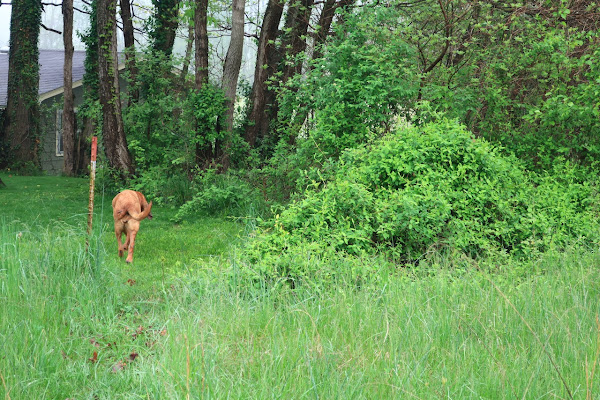 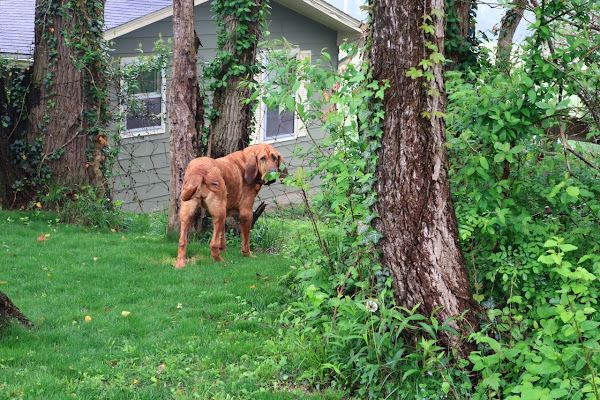 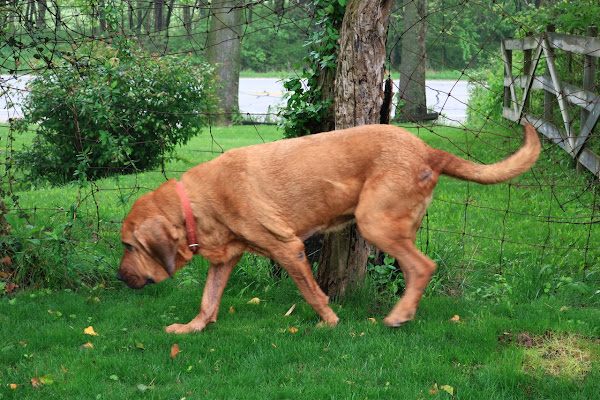 Here she is dodging a small patch of mud. She jumped at it right before this pictures but the camera or user was not quite fast enough to catch her with her front paws in the air.  She was just getting ready to take a bite out of that fresh new dirt that had turned to mud. If she likes something she will eat it as long as it is not a dead animal. We don't run into those. 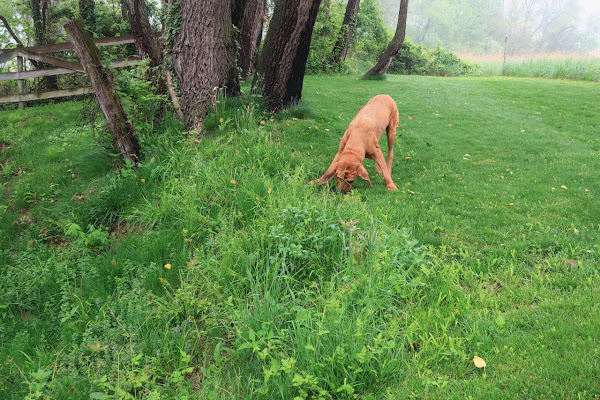 This walking as close to the house as possible morning routine has lasted longer than I expected. Looks like that landscaper I hired needs to show up and pull some weeds. 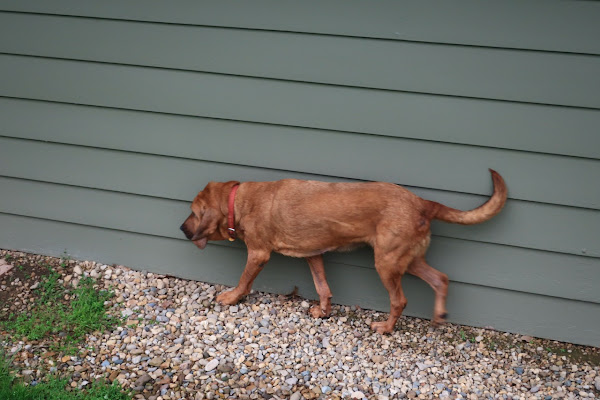 I can't remember if I mentioned the other day when I didi my monthly measurements and had not logged in my food intake for weeks ... I ended up losing a couple of pounds, the fat calipers showed an additional 2mm but my stomach was the same. Strange movement I'd say and a little surprising of eating what I want when I want for the past few weeks. I can't remember now when I stopped logging my food intake.

It was cool weather this morning with all the windows open. Heidi slept through most of the morning and moved from the dog bed in the bedroom to her chair in the living room, then on to the couch. I guess she was restless this morning.

Not a damn thing went on today. Even Heidi didn't want her photo taken and acted like she was sleeping with her head up. 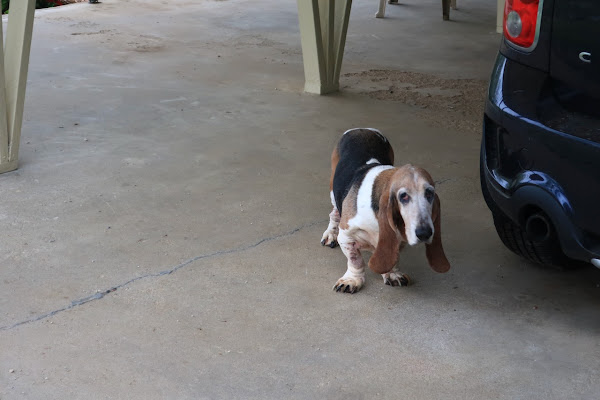 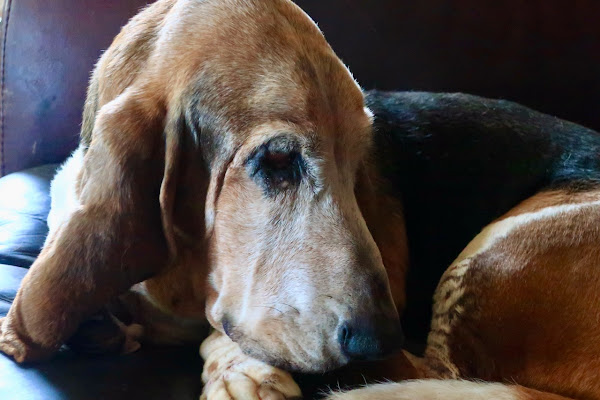