The Weather Is Nice This Winter 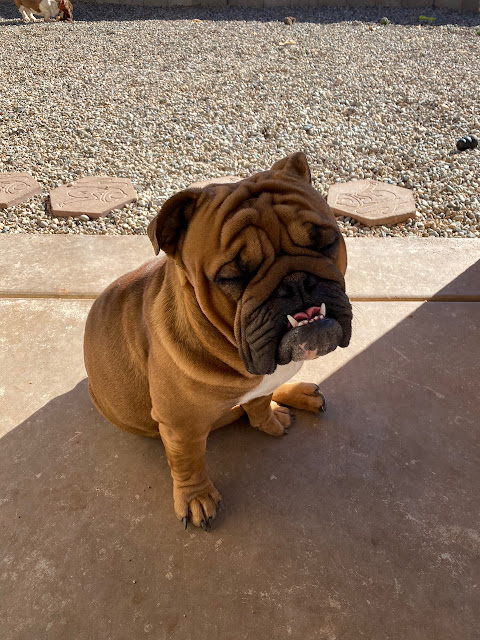 The hounds and the dog are really enjoying their days outside this winter. Hot and dry is not good for water supplies but it's perfect for them. They spend a lot of their time outside in back, while I am at home or if I am out running errands. I fill the holes they dig back up and the next day they will move the rocks to where they can get to bare Arizona dirt. Henry is a hunter of wood buried under the rock. Stella always feels the dirt is better to sleep on but with Walter, I am not sure. Font sizes are too small for laptops and tablets but if adjusted they are too big for phone readers. You will have to adjust them from your device unless I find the magic answer. 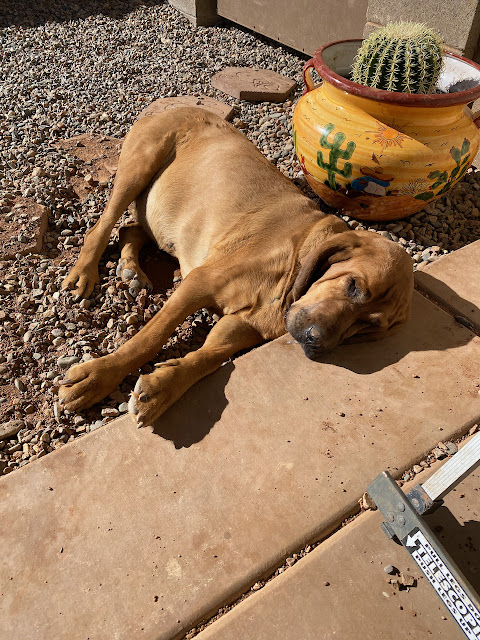 They don't know it yet but today is going to be toenail day. Yes, that patio gets swept and cleaned daily due to the rocks and dirt she flips up on it. At least she is not digging under the gate trying to escape. I am wondering if Stella would enjoy a patch of that artficial turf to sleep on? How hot would that "field turf" get in the summer. 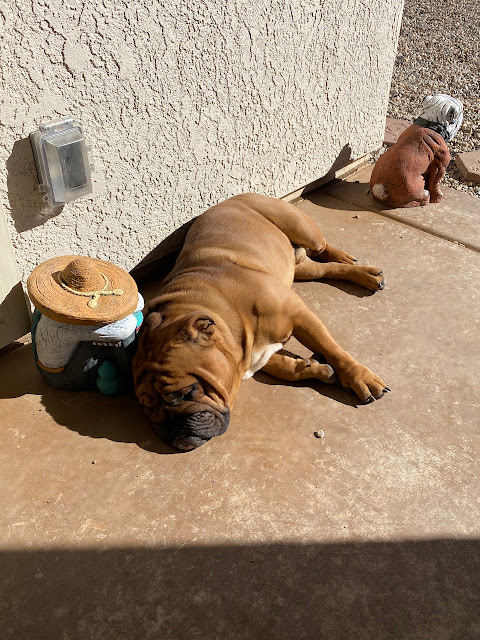 Walter is convinced he has a new friend sleeping next to him. He has been trying to communicate with him but doesn't any kind of response after a lot of licks and a few paws. He has barked at him once and the guy never moved. 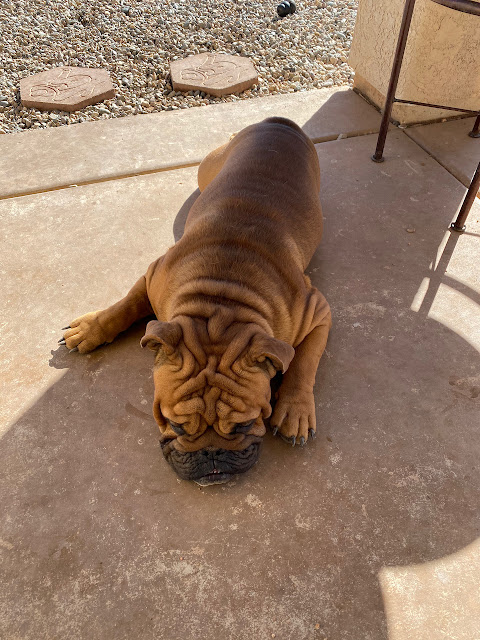 Hard to believe he can be sound to sleep with his ears perked up like that. Where will I put the hounds and the dog this spring while I high pressure wash and then paint the patio. That should be an interesting 24 hours. 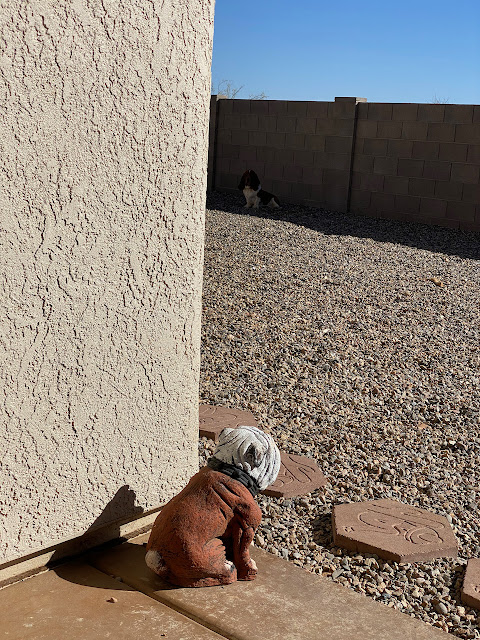 Henry was checking me out, hiding in the shade, trying to find out if I could see him digging. Can you believe right after that photo was taken, he turned and started digging until he heard his name being yelled. Right there in front of me and he never hesitated. When I walked out to move the rocks back over the bare dirt, there was a tree root from a small three that was there in 2011. He has found a million pounds of wood buried under the rock the short 4.5 months he has been here. 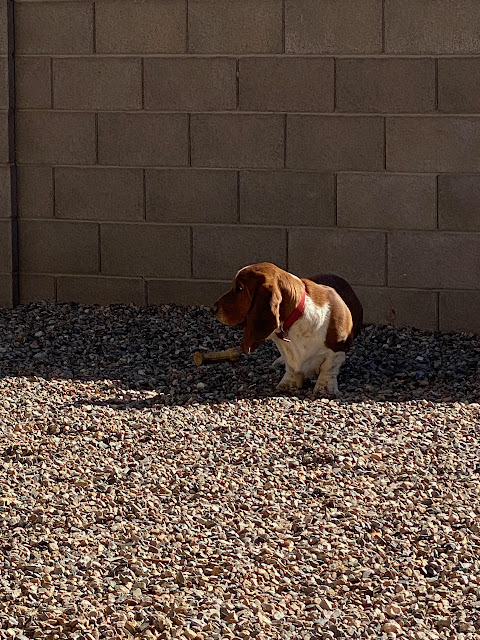 He does not care how dark it is or how cold it is, he loves being outside. Yet prefers his afternoon siesta and meals inside the house. 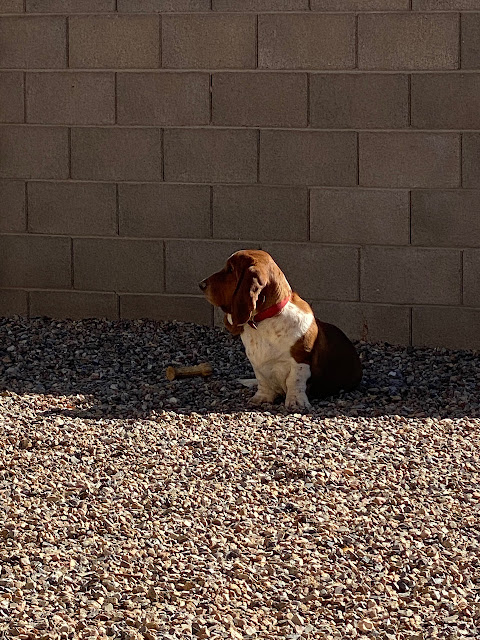 He loves it when the doberman next door climbs up on their ledge, stands looking over our fence. He is about 9" shy as he will try to stand on his back legs and touch noses with the doberman. Henry is quite socialble. He loves other dogs, other people and especially the person deliverying pizza. 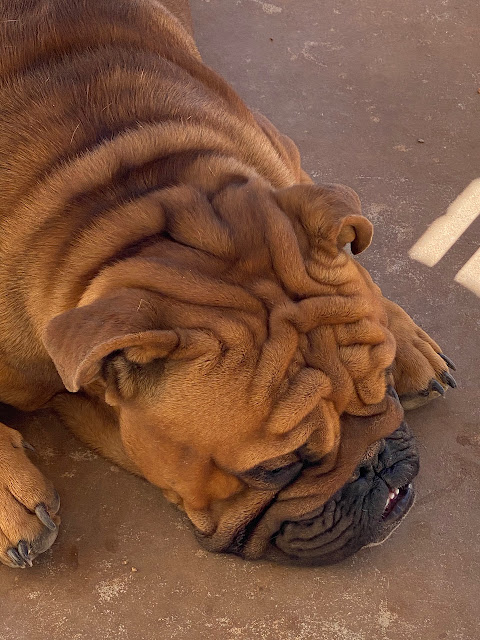 It doesn't take much for Walter to start snoring deeply and loud ... inside or outside. 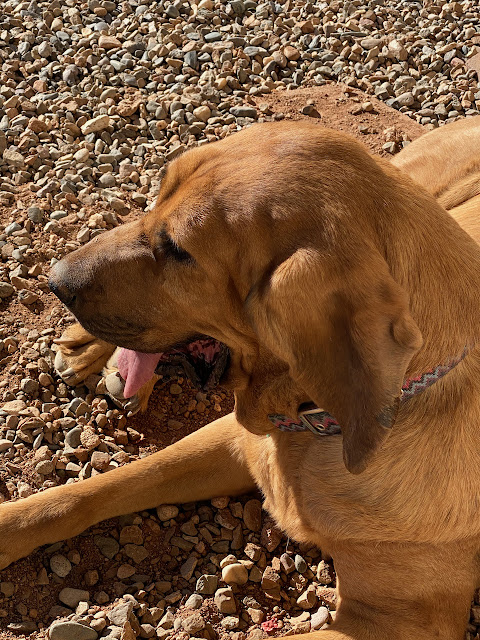 Temps in the high 60's still has a very hot sun so it does not take Stella long before she started getting too hot and moves back inside to the corner of the computer room to finsh her afternoon. 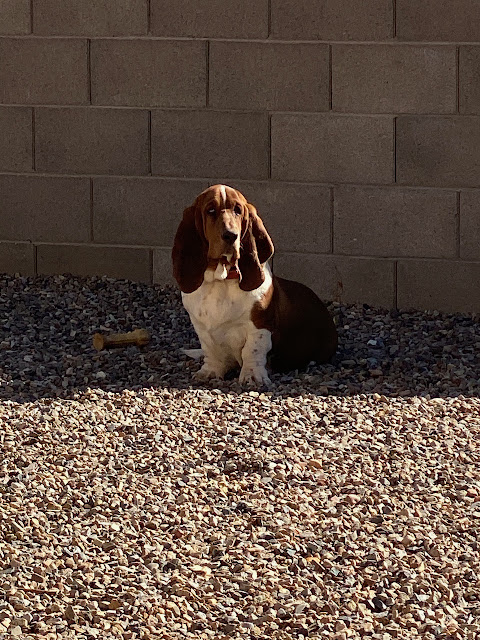 He looks so innocent, but he keeps me active and alert every minute of our waking hours. I am amazed at all the stuff he can find to drag out or bring to show me. He has a fantastic nose and would do very well in a field of hiding rabbits.

What can I say? "Old" Blogger was much easier to customize the design of the blog. Some of the newer templates I have tried does not even have access from the home page to get into the dashboard to start a new post, this one included. I have moved from one to another trying to find one I like. I have not found a photo yet for the background photo at top that will accept the whole picture being uploaded instead of the upper half of the photo. Any kind of cropping only makes the imported photo blurry.

I have decided to sell both of my old VWs as they have one thing in common with RVs, it doesn't matter how new they are or how restored they were, something always needs fixed. I have not been left on the side of the road but the frugal side of my brain is saying "enought is enough" when it comes to my monthly expenditure spreadsheet. Both are on eBay with a lot of interest and activity these first few days of auction. The single cab pickup will end this Thursday afternoon while the panel van will go an extra 3 days to late Sunday night, a week from now.

I have even considered getting down to two vehicles in the garage ... friends have told me that will never happen and laugh at me.

I see nothing but sunshine icons on my iPhone weather app for the next 10 days. That is one of the reasons I moved here. Oh, I almost forgot. I had an unexpected surprise in early December when I had a new buyer for the house back in "the tropics" that I had sold on contract when I left in June 2019 to someone I really misjudged. His family would win Monopoly if there was a game for that small town. He is sending me photos of the remodel and asked a lot of questions about the history of the house and property. He said he always liked the house when he drove by although he lives in a mansion about a mile south of there.

He is doing a total remodel inside and out. The photos I received on Friday, the inside had been stripped to the 56 year old framework. He is also attempting to buy "the field" that is directly behind the house all the through the woods and down into the gully where the property line is. Once finished his young daughter will move in with her two dogs. The real estate deal was finished 18 days and the full amount was wired out west to my account. Such a relief from this time a few months ago, when I thought for a while the hounds, the dog and I were going to have load up and head back for a while to straighten things out.

Came close of buying a mirrorless Olympic camera a few weeks ago and actually followed what my brain told me, backed away and saved my money. When I get up in the middle of the night for water or bathroom trips I see off in the distance above the border one helicoper is quite busy late at night. It will only become more active after breaking records each month since September. Each month is beating the statistics of the previous month.

Looking back in the blog to years past ... not much has changed besides the location, the weather and the hounds. What I think about is the same year after year which I guess is normal ... diet, riding a bike, boredom, financials, which stock to buy and why do I have this crazy car addiction? Its not something that is new. I have always had, most of the time too many vehicles even before I retired. I remember my dad being the same way. He loved cars and we always had more than two.

I think some scouting the area with the camera is in the plans today. Great weather here in the "Wild West".