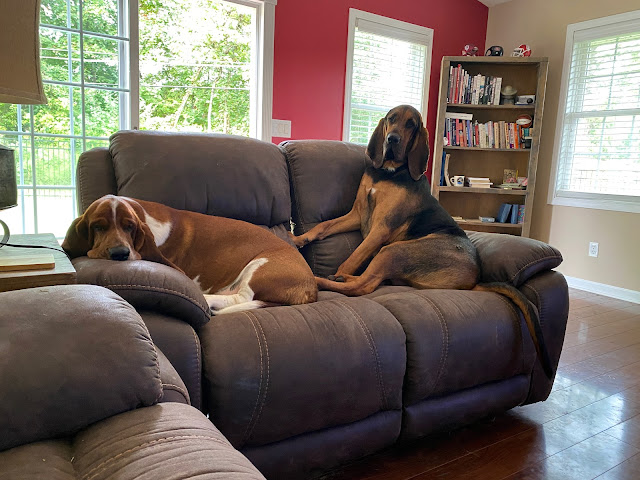 As you can tell we have been motivated since our last post. The sunshine has been out every day, cool 50s at night and no higher than 82 during the day. With that kind of weather a lot has been getting done. Not all work but a little fun on Wednesday afternoon. The yard is so dry that I bought a water sprinkler and started watering the backyard a few weeks ago. I decided to pay money for more water use to save my yard. That has worked out well. 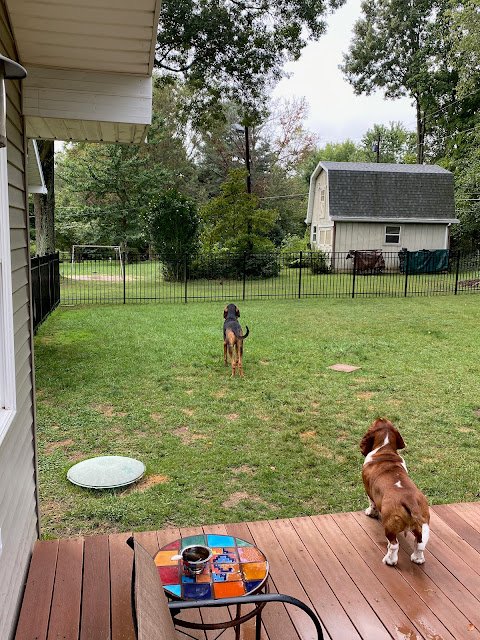 I may have installed the fence to keep the hounds inside the yard but that doesn't keep the squirrels and rabbits from tormenting them from outside of the fence. Watson will even find them in the dark and bark at them to let them know he knows they are there. You will notice that Henry is locked in on the squirrel also. 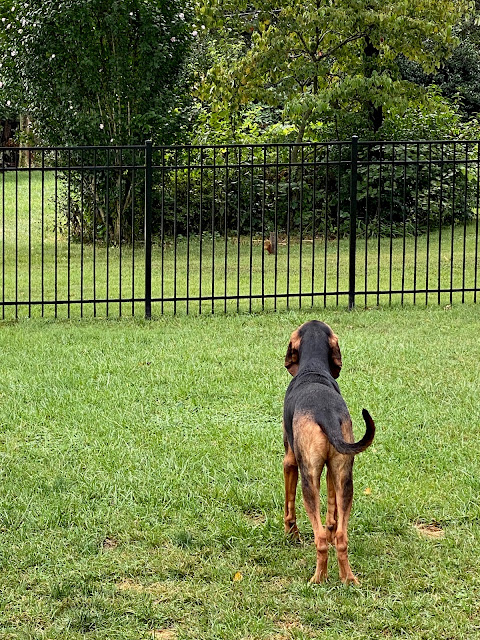 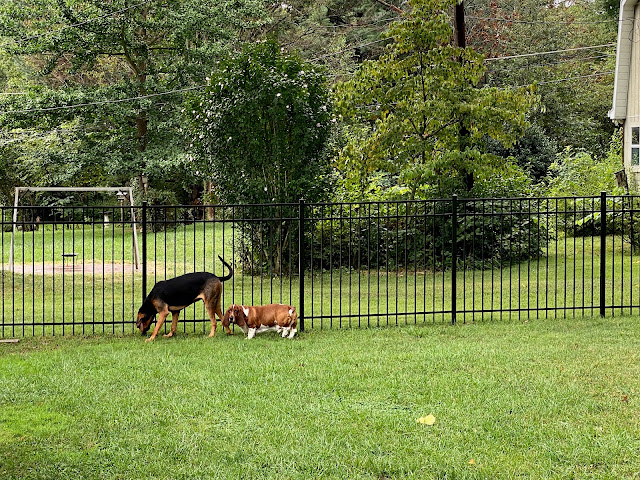 They explore the fence line every morning but this photo was right after they got closer to the squirrel who ran away. 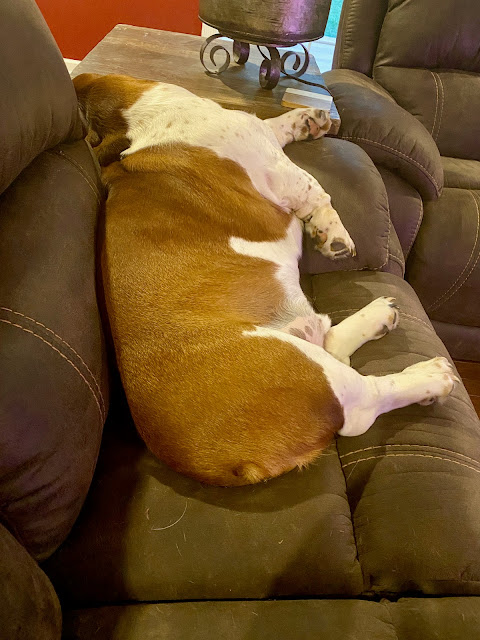 After a day full of running and playing with Watson in the yard, laying in the sun and supervising any yard work I have been doing in the back Henry was exhausted by the time baseball was on tv. 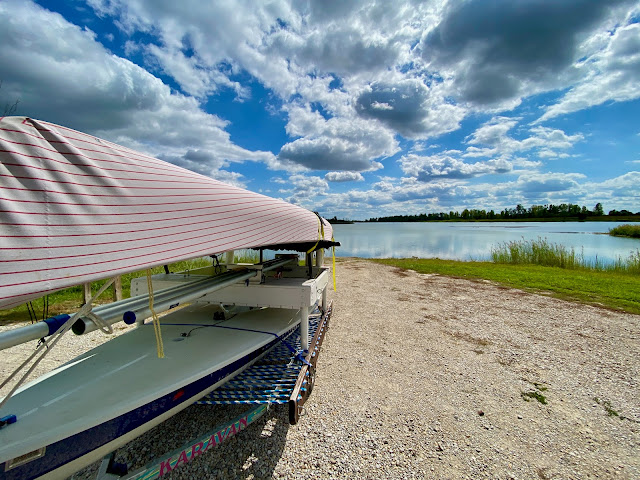 I had just started cleaning my pellet grill when I got a text from my friend that he was planing to take his laser sailboat out and I could use a canoe or a kayak that he would also be taking. He had spent this summer finishing his modification for his trailer. It carries his sailboat on the bottom and either two kayaks or two canoes on top, or one of each. 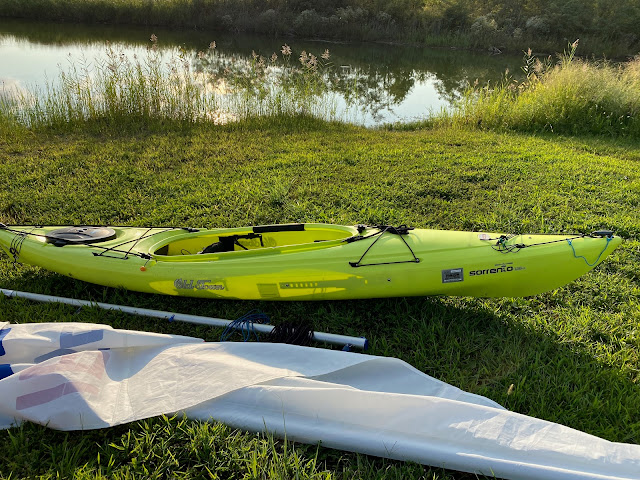 I forgot to bring my waterproof bag for my phone so I left the phone in the FJ and didn't take any photos while I was on the water. These are only before and after photos. 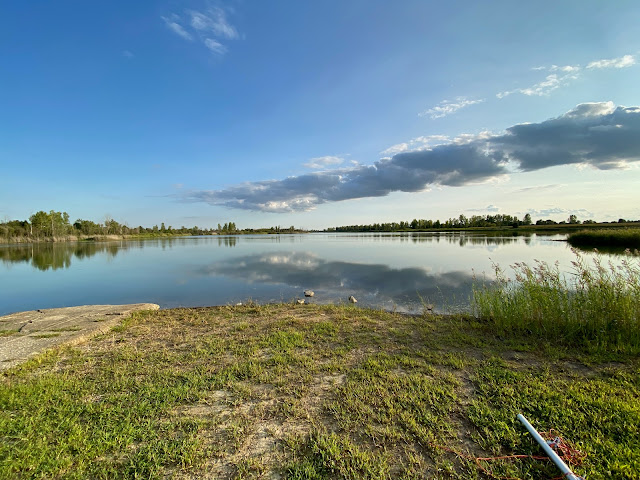 I was told before I got into the water I could go as far as I wanted toward the top of this photo. The water went forever. There were so many inlets to explore I spent over three hours on the water. My friend was having a hard time sailing at times because there was no wind and the water was just like you see, like glass. 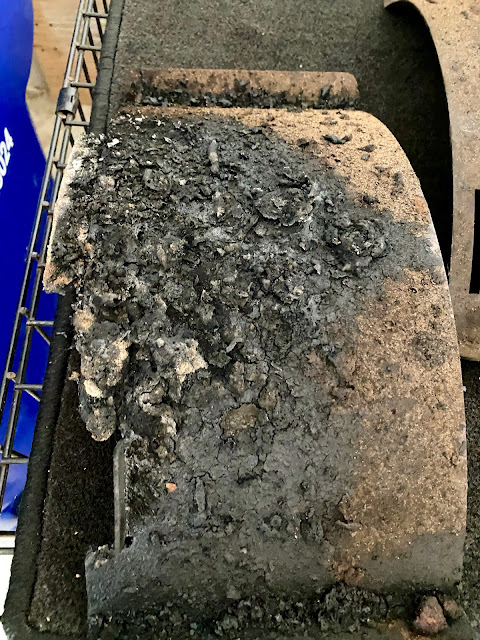 I knew my grill needing cleaning because it had been about a year. Well last Sunday while grilling a thick steak I went out to check it and when I opened the lid flames shot out. My steak was ruined but I was happy I did not have a major fire. The 4" putty knife I used on the porch I also used to scrape all of this off. With some Dawn dish soap and water, the metal cleaned up like new. 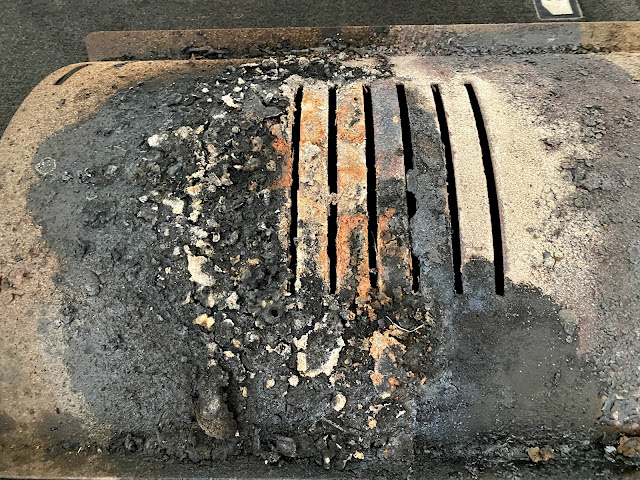 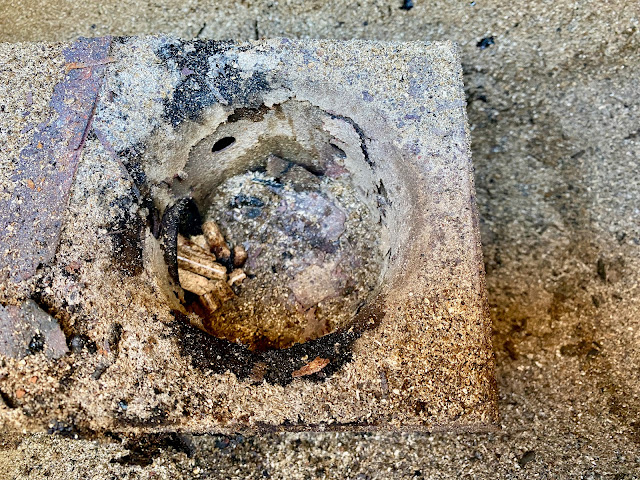 I can't believe the grill could light a pellet due to the buildup. 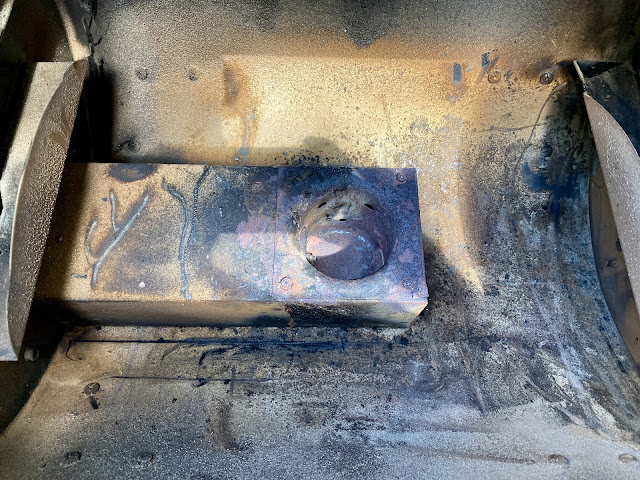 Vacuumed all the ash out with my shop vac. 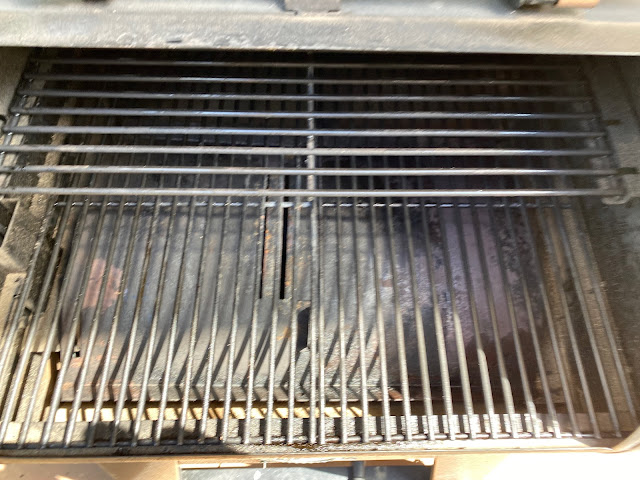 The grill is ready for this weekend's football games. 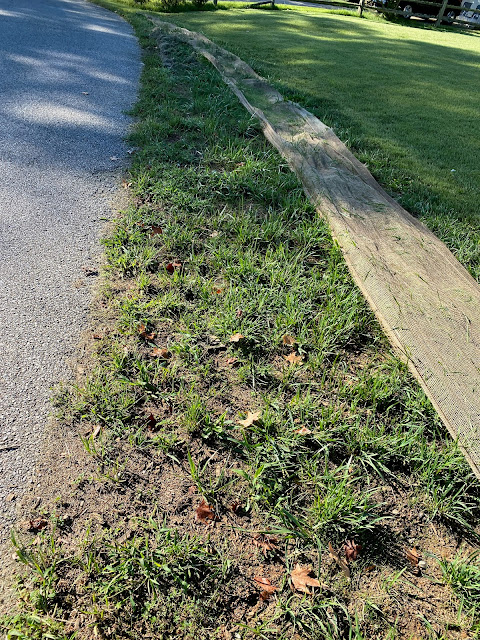 When I moved in this house this whole section of grass or grass "to be", was hard packed gravel. Previous owners had used it for visitors to park their cars. For many years this house did not have a two lane, 2.5 garage. It had a carport and one small driveway, so they parked out front. Last year I didn't make much progress in growing grass after raking out about 3" of gravel then adding top soil. If the rain didn't wash the grass seed away, the birds would eat it. I found out from the new grass I grew in back by the patio that the burlap cover did great protecting the new seed from the sun. So I tried that here and had new grass showing up 10 days after I planted it. 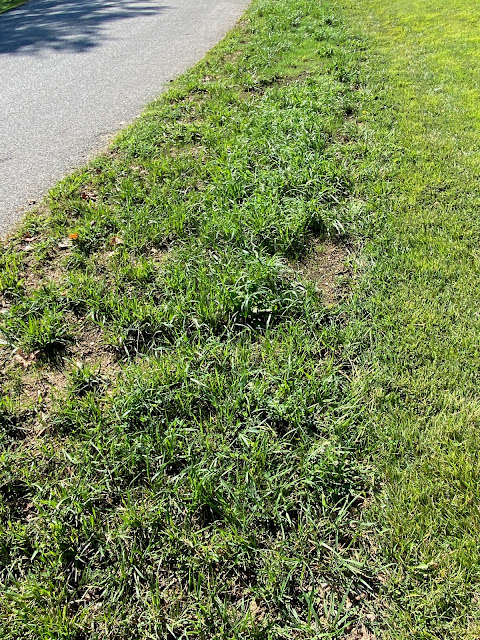 It's a mixture of rye and fescue with some Kentucky blue grass I used last spring. The latest seed was made in this area for the type of dirt in this area. The landscape nursery told me it would do well when I showed them a photo of what I was working with. . It worked just like they said it would. Any bare spots you see has new grass growing and it is much taller as of yesterday, where the bare spots are disappearing. 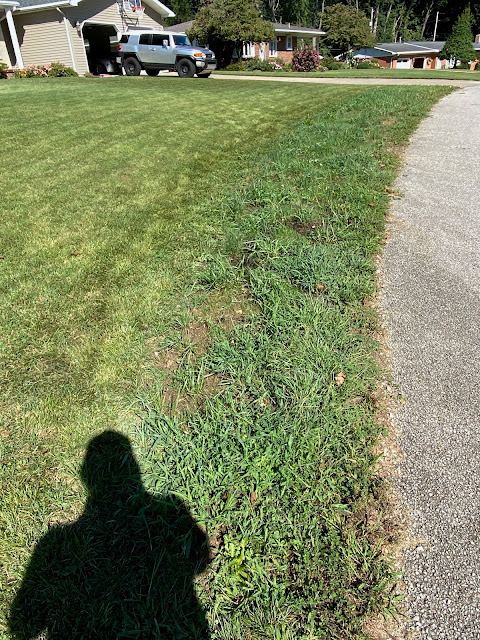 In the middle of August right before I bought the new seed, my neighbors landscaper that built her new patio and placed straw around it for her grass to come back, told me I would not be able to grow grass here with that hard gravel bottom. I told him I raked out about 3" deep last summer and filled it with top soil but he was still not convinced. 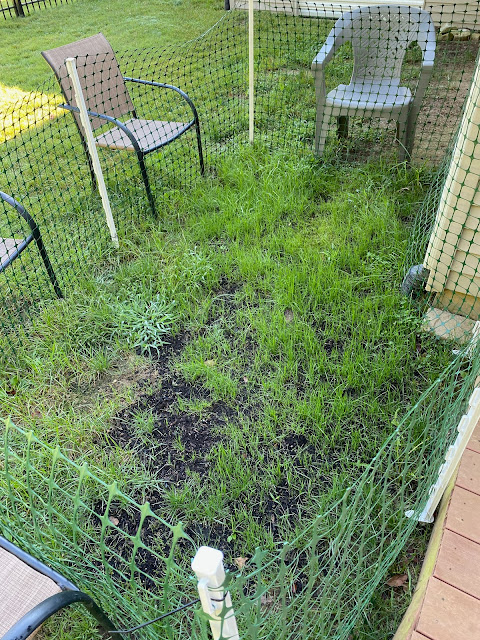 This area was doing so well I took the fence down on Tuesday ... you will see why I am putting it back up after this post. I am going to have a choice to add more top soil with each standing water period this winter or, dig out the new grass and transfer it to another part of the yard then make a bigger rock garden in this area. My neighbor told me just this week that this area has flooded for as long as she can remember, living next door her whole life. 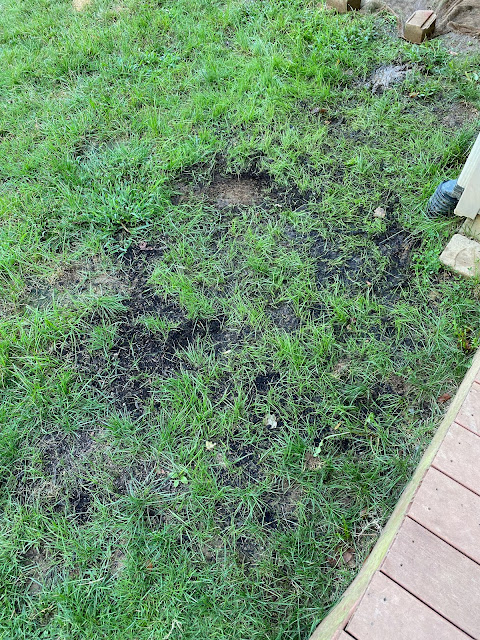 I had leaned around the corner to look at my new grass along the side of the house that was under more burlap. I figured if the burlap system worked so well here it would toward the corner of the house/shed. But something caught my eye before I could look further. A SPOT WERE WATSON WAS DIGGING !!!!! 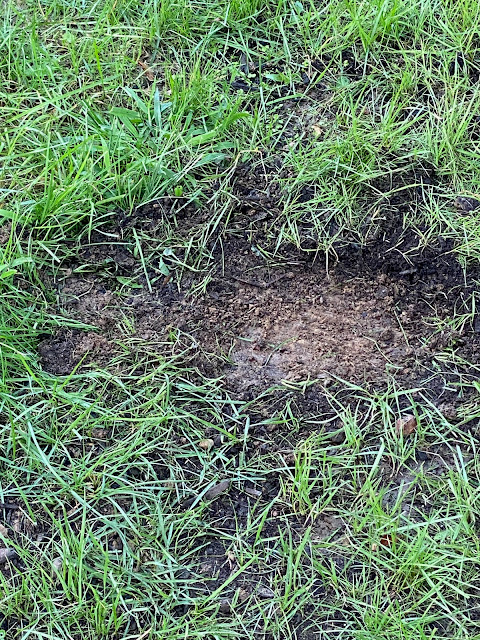 A quick check of the front toe nails of the two hounds proved who was guilty. Watson. The fence goes back up before I do anything else today. To say my pulse rate immediately went off the charts would be an understatement. He understood exactly what I was saying to him. 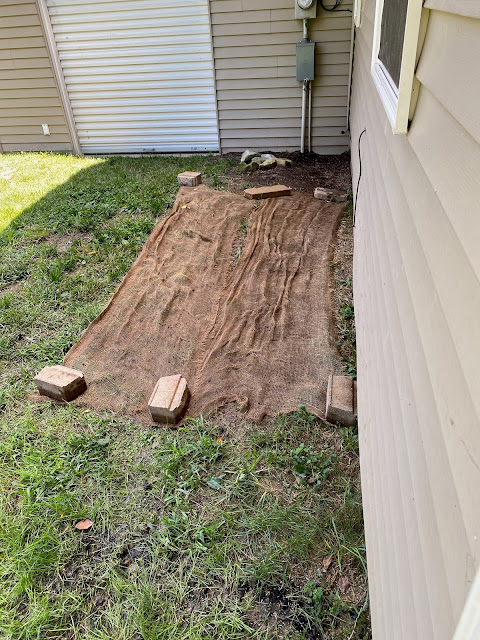 The are two problems that might hinder the growth of new grass as good as the corner where Watson dug. No top soil, just hard clay that was raked and mulched to become a softer soil. The other problem, Walter insists on sniffing every inch of he while he walks on the burlap. I am not sure I have enough fencing to do both areas but I will find out within hours. 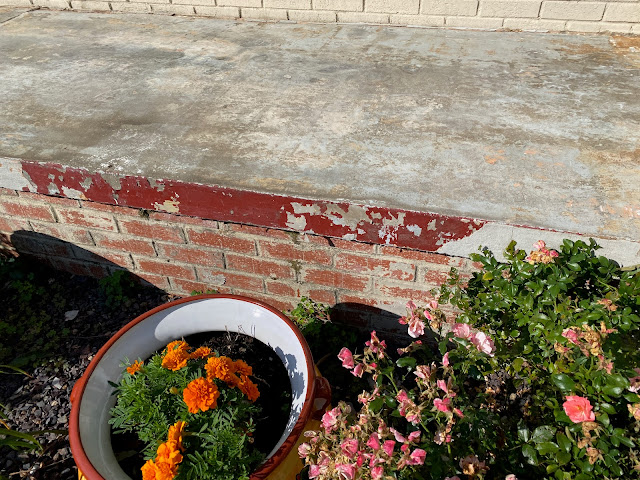 Phase II of my porch project took place the other day with a "senior moment" involved. I am almost embarrassed to tell that story. The goal was to pressure wash the edge of the porch and front step taking off all the red paint that was under the mortar. I also wanted to see if it would take off the dried glue on the porch itself. In the end my washer did both.

The "senior moment" ... plug the washer in, turn it on and within seconds goes silent. I pull the handle but no water. I check circuit breakers, the GFI plug, test and try again. The machine does not even turn on. I focused on repeating the plug inspection but didn't pull the handle again. This went on long enough for me to go back inside on my computer, look at the owners manual and eventually call the customer service number.

She said we don't handle that brand of washer. I said that was impossible because the owners manual came out of the box and I am calling the number on the manual. Well she gives me a different number to call. While I am on hold waiting for a voice, I realize the manual is for the washer I had 3 years ago and gave away before I moved to AZ !!!!!

I go back outside to let the mailman see Walter as he pulled into the driveway. I tell Matt I am taking it back to Home Depot for a refund without a receipt and a year old then buy one made by Honda. He leaves, and I start to take the hose off and get it ready to load in the FJ to return it. I thought I will try it one more time .... ONLY this time I pull the cord out of the plug, plug it back in ... walk out to the yard and turn the machine on .... it starts up and then the sound goes off. I pull the handle and have high pressure water.

The confusion was .. this machine the loud sound would go off once you released the handle whereas the other machine I had the loud sound stayed on all the time. I hate getting old. 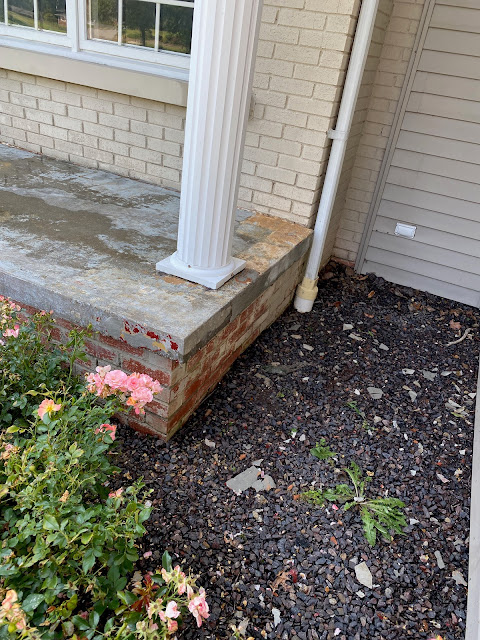 That small area of red paint would not come off after many tries, with gaps of time in between. That section of clue up by the house on the porch corner would not budge either after many attempts with gaps of time between attempts. They are smooth enough though to have the porch primer cover them. I hosed off any mildew or mold from the original brick below the porch and will not paint over them. 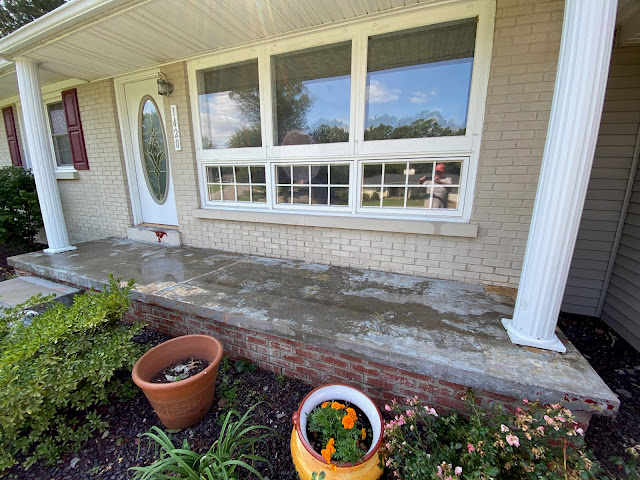 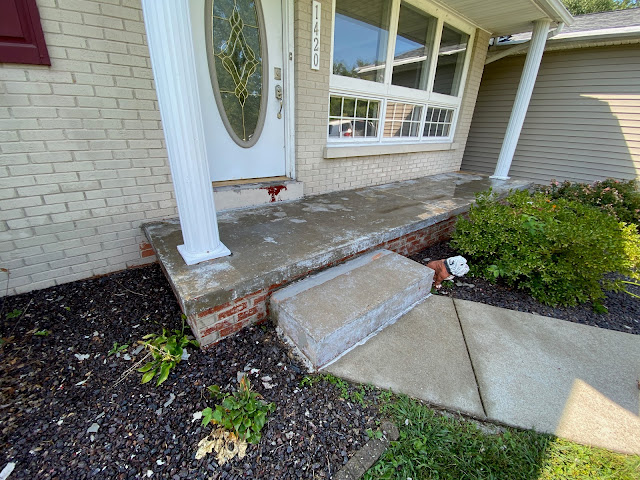 These last two photos still show the water has not dried on the porch. Today that porch looks as clean as the front step and sidewalk. I will caulk the base of the two posts and the pressure washer exposed a few small holes on the porch that I can fill with some cement that comes in a tube. I used that on my carport up north and my block fence in Sierra Vista. It dried fast and worked just like the cement it replaced.

The lady at Lowes paint department felt I needed to prime the newly cleaned porch since had taken it down to the bare concrete. The primer I bought will also seal it. The paint she suggested had the texture already added to the paint making it much easier than what I did 20 years ago. It is going to be a simple paint job that I should finish by Monday. I will do the sealant today, primer on Saturday and paint on Monday.

If the garage and great room were not covered in vinyl siding, which I have never been a fan of, I would pressure wash and blast the paint off the original brick on the whole house. That would not look right with the vinyl siding color for the garage and great room so the paint stays on the house. Next summer I might paint it a little darker to match the color of the garage. I have all winter to think if I want to do that.

Well I have to get started. I am running late this morning since it is almost 10am.

Weeks of beautiful weather here in "the tropics" of southern Indiana.