Has Been Quite A Day 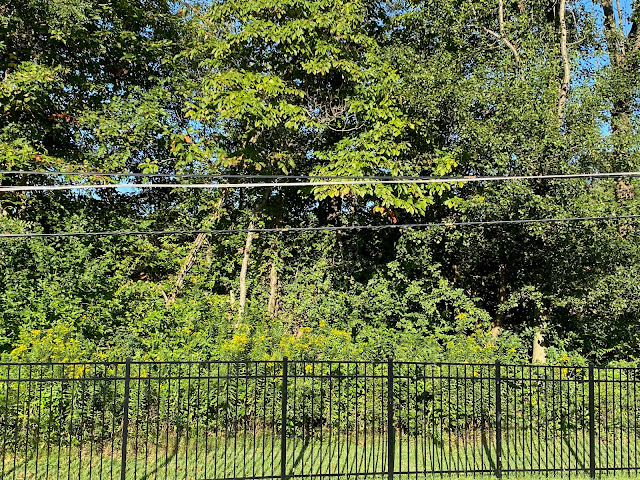 This post tonight will be just an update about my painting projects. No hound photos but I will say that we all had a busy day today and all three are sleeping by the computer desk in 'their' freshly painted computer room with no lingering paint fumes. I had planned to start around 9am but the porch was dry enough to start painting the porch earlier than planned and I am glad I did. When I finished at 9:20am it was only a muggy 81° but felt like 100°. I cleaned the brush and roller then headed inside to paint the living room. 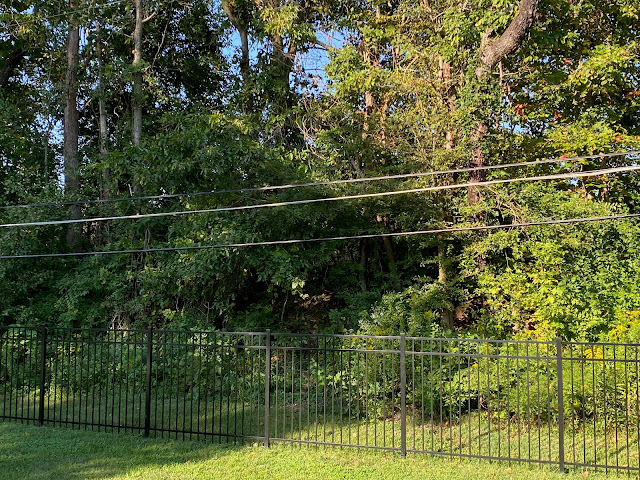 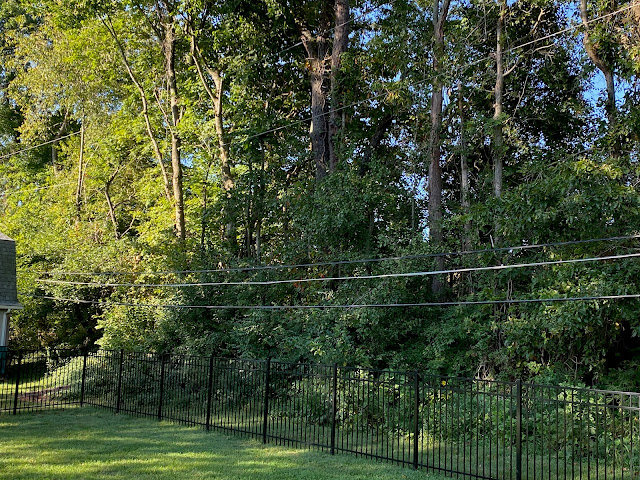 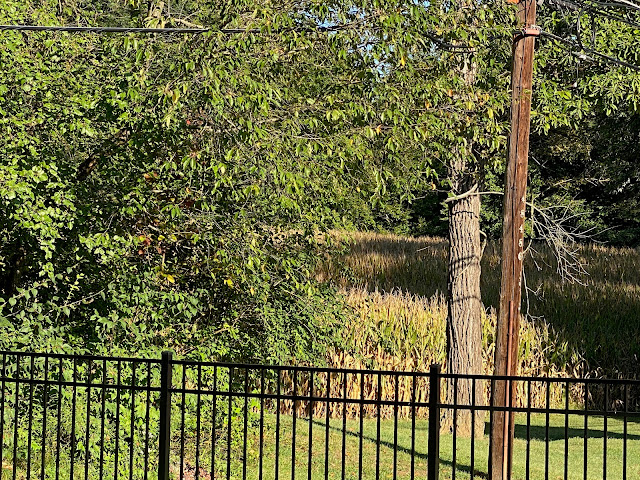 My friend was curious where I throw my dog poop when I pick it up with my pooper scooper. I can throw it from anywhere in the backyard, into the wooded berm. Most of the time I clear the power lines. It sure beats what I had to do in Sierra Vista. Out there I would put the small bag on my hand and pick it up, then wrap up the collection and toss it in the trash. The scooper did not work well on a rock yard. I know to some that is probably too much information but there is a lot worse stuff to bother with. 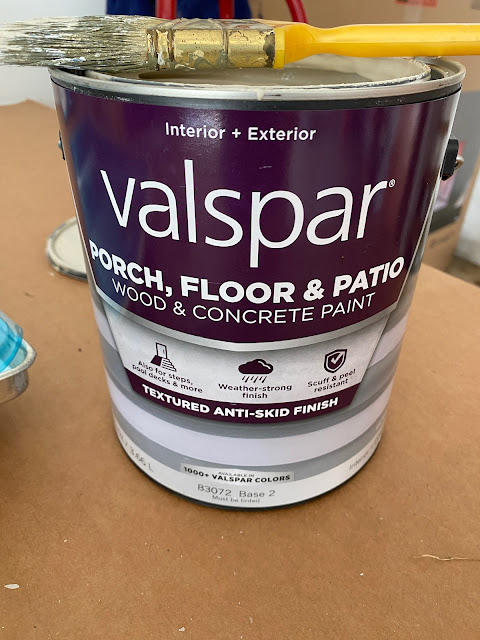 Debbie is the paint expert at Lowes, with a degree in art. Maybe close to my age because her hair is a nice gray with no coloring. She hooked me up with this paint and the primer I used when I showed her a photo of my porch and what I was wanting. A light gray. 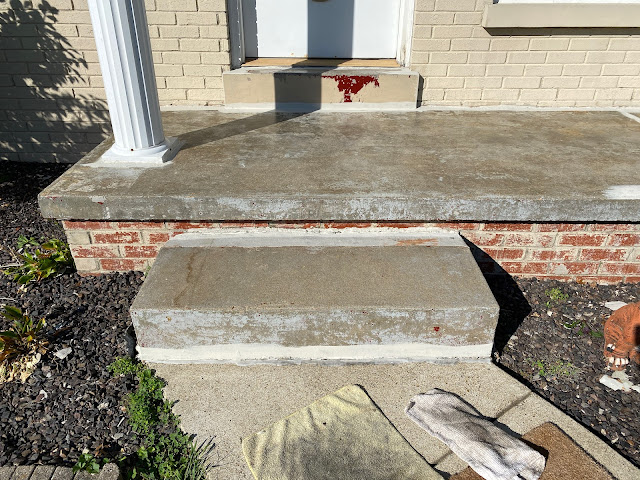 I was expecting a different coverage but the primer was also a sealer for concrete so after it dried, the primer looked just like this and that is after I put two coats of it on. I started with a brush to get the trim and around that porch step as well as the door step. It was already really hot so I was happy that my job wouldn't take too long.
Now Debbie decided she would find a better shade of gray that I had chosen, to make it look more "homey" instead of that other king of gray. When she gave me a sample after she mixed it, the color looked about the same as my painted bricks. She said after it dried it would be my light gray that I wanted. You will notice the very first swipe with my paint brush was on that step and it sure looked lighter than the brick and no where close to what I was wanting as a final color. 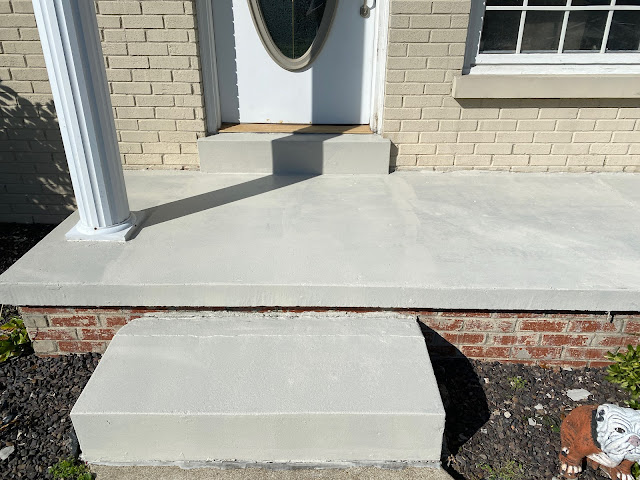 I start painting and immediately think I have really screwed up with this color. It was going on tan, a little lighter than my brick. I decided I would paint the porch, the steps and the edges, let it dry and then decide what I needed to do. She was right. When I went outside to look about 6 hours later after I finished the living room, it was light gray. In fact when I set one of the old pieces of mortar on the porch, they were close to the same color. 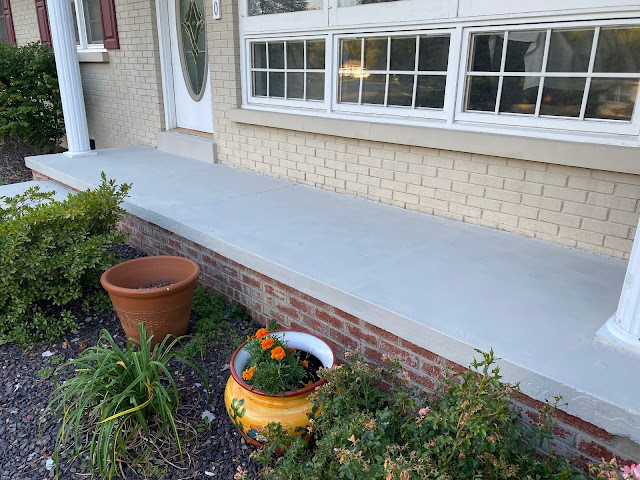 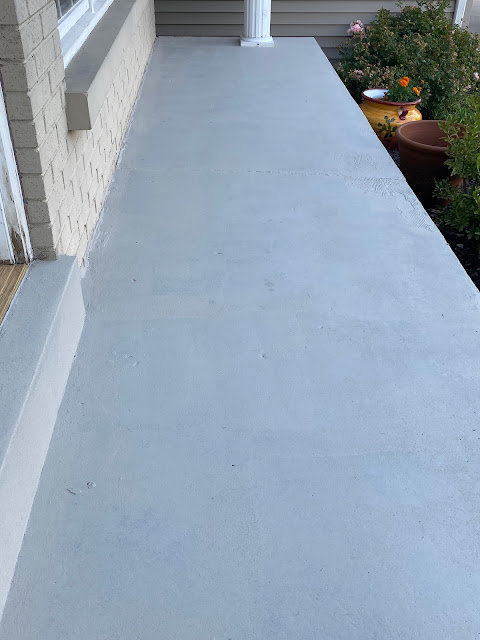 Not the two steps but the porch will be getting a second coat tomorrow morning. Luckily the temps are going to drop tomorrow about 20° and stay that way for a week or so. I will also be painting the door jams to the front door this coming week.

I came inside and poured myself a large 'jar' of ice tea. It is one of the Rao's pasta sauce jars I decided to reprogram as my ice tea and ice water jar to drink from. The baby gate played a huge factor today. Watson passed his baby gate test as well as Walter and Henry. Sadie and Stella would have knocked over that gate and come out to supervise my painting but all three stayed behind the gate in the hallway and the bedroom while I painted. A few times I had to go to the garage to get more paint or to set up things and they never broke out from behind the baby gate. 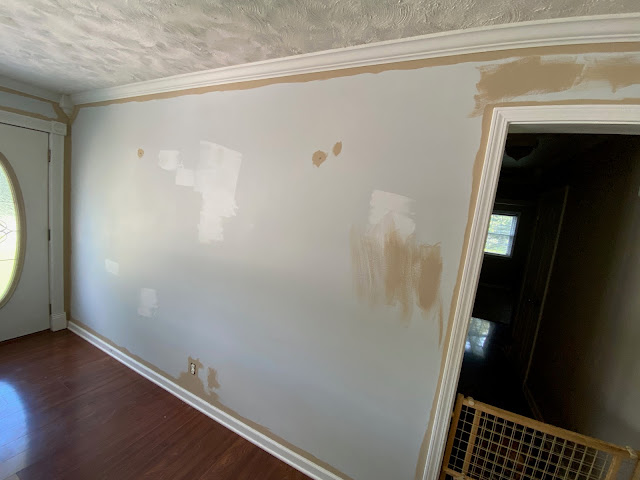 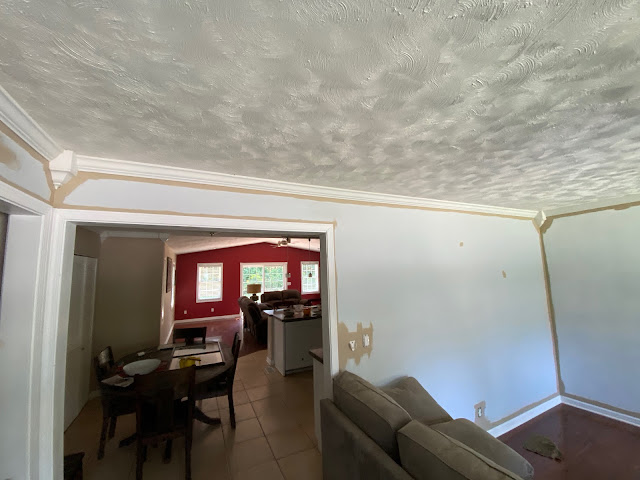 It took me an hour and half to cut in all the trim. While doing that I could see that I was going to have to paint the white trim sometime. I wasn't getting paint on the trim but the previous owner had left his color of paint in many places that I didn't see until I was up and close. In fact it looked like based on their work, they never got on a ladder or stool to paint above the doorways. I could tell by their work they painted that area standing on the floor. 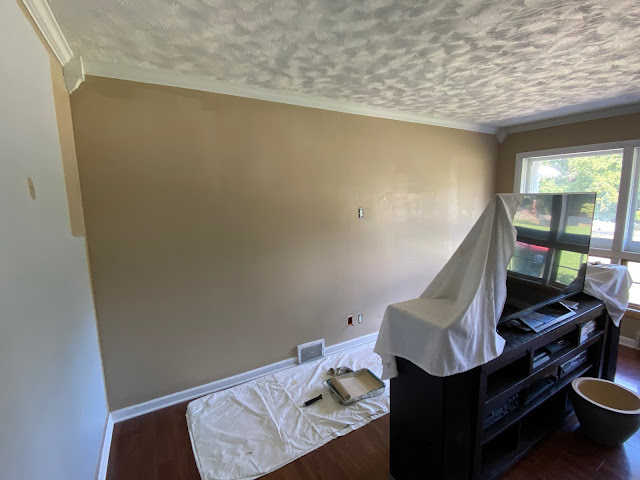 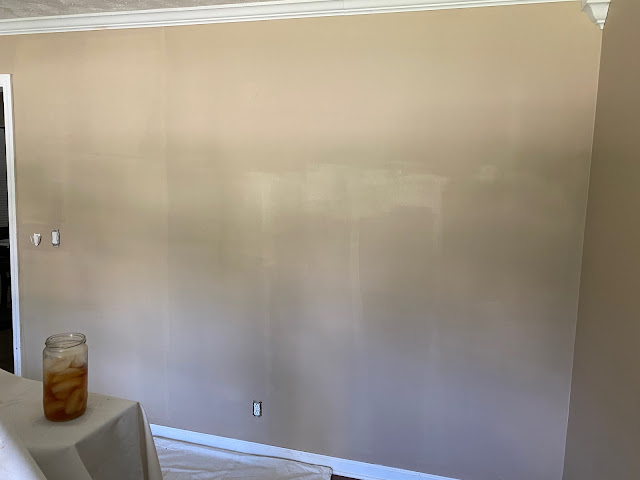 Many jars of ice was a life saver today as well as ice water. That is a wall of wet paint. 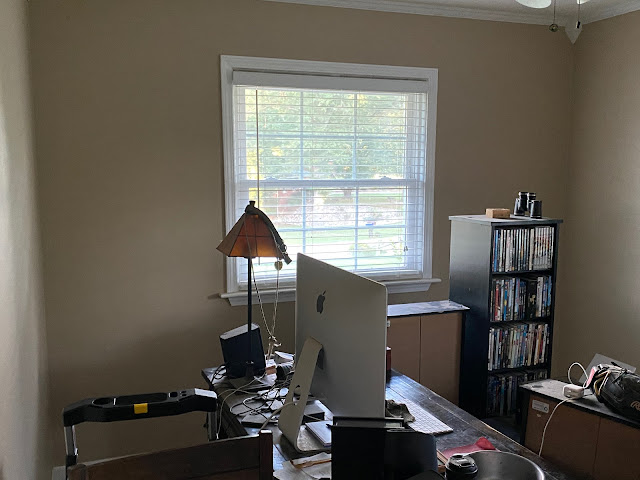 The computer room was in the plans but not today. Things change when I am on a roll. It might take me time to get started on a project but once I start I cross that line of insanity until I am finished. So at 3:30, living room done I thought why not ... I have the paint out, I am already in my paint clothes so I would paint the computer room. After I got started I thought, I'll paint around the windows and closet door plus the doorway and leaving the trim for tomorrow.
It was looking like it was going to be close to have enough paint to finish the room, then I wasn't sure I had enough to cut in the trim because I changed my mine and decided to do as much as I could until I ran out of paint. Well wouldn't you know it, as I was getting paint from the bottom of the can, paint that did not pour out when I did the last batch into my roller tray, I am getting close to finishing all the trim.
Long story short ... I painted all the computer room in 2 hours and put the room back together tonight. Excuse the heavy dust in that photo .... Lemon Pledge and I took care of all the dust as I was putting the room back to where it was. So everything looks and smells like new. 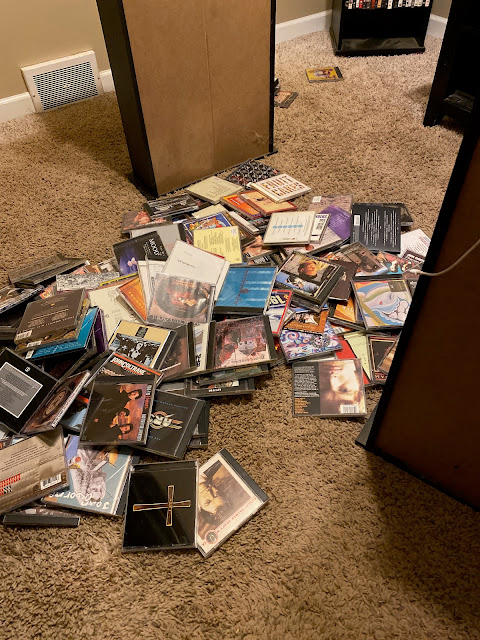 As I was moving everything away from the walls into the center of the computer room my cheap CD cabinet caught on the carpet while I was trying to lift and slide it. Many many many CD's ended up in the center of the room. The were alphabetized to prevent me from buying duplicates years ago but they did not go back on the shelf that way. Henry made sure he helped me getting them back on the shelf by standing right in the middle of them, on them and sniffing each case to make sure the CD was inside. LOL 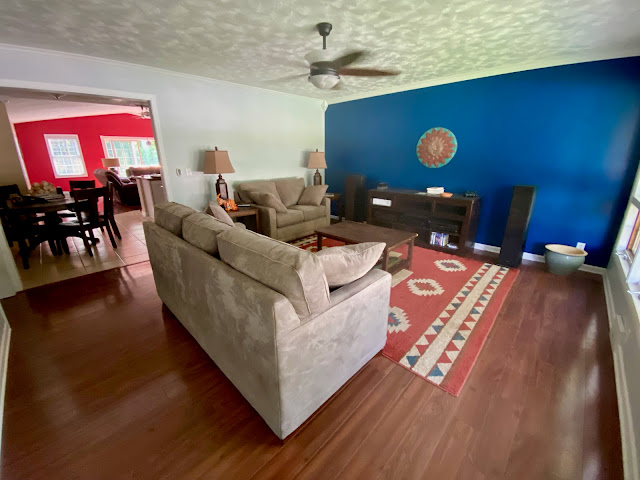 This was the living room July 2021. I never cared for the blue accent wall nor the light mint green walls. The coffee table was donated to the trash bin before Stella passed. She destroyed it the first week we lived here with her separation anxiety that came back tenfold after we moved here. Walter took the rug to the trash bin. I couldn't figure out why he was marking his territory after we moved here and on that rug. I found out later the previous owner had a lab puppy right before they moved. Walter evidently decided to make sure he knew what was now his territory or the rug was his. 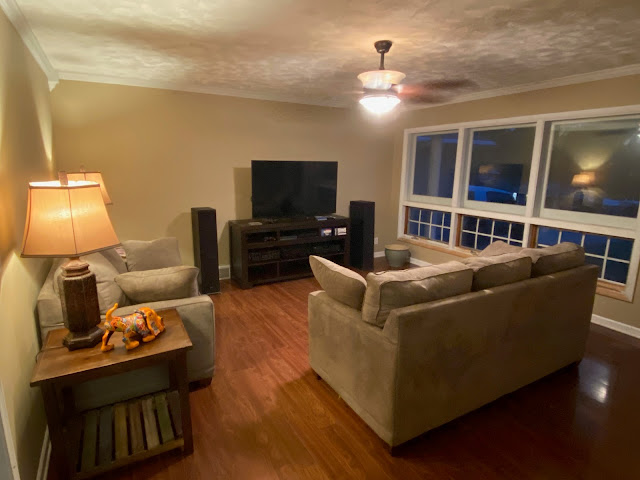 Poor quality photo, user error but I still like this look better than what I had before. Those lower windows are my next project. The contractor I hired last winter to fix the damage from Stella couldn't quite figure out how to sand wood putty to where it had a straight edge. I paid him what we had agreed for the job which included paint. When he was going to paint over that terrible job of wood putty to finish the job I basically paid him and thanked him for cutting the new piece of unpainted trim. Then told him I would finished the rest of it. 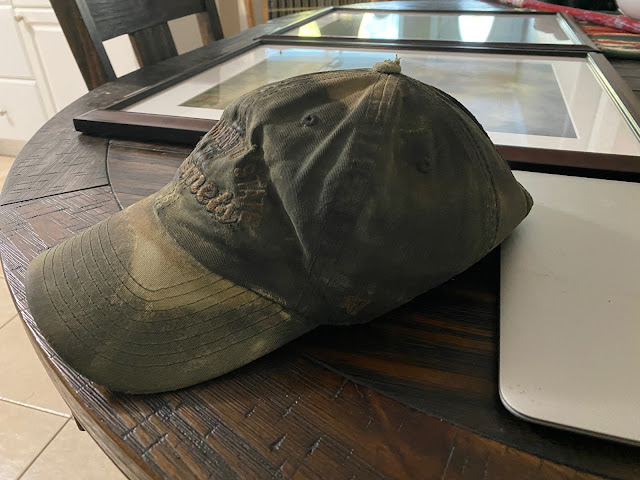 It didn't mater if I was outside or inside with the AC set at 76°, it was one hot day in the 90's outside. I should sleep well tonight but I have the dog and one hound snoring now and at times their snoring is loud enough that I can't get to sleep.

I will paint the second coat on the porch tomorrow and then I think I will take the rest of the day off. It was a good day here in "the tropics" of southern Indiana.