Next Project Was Outdoors 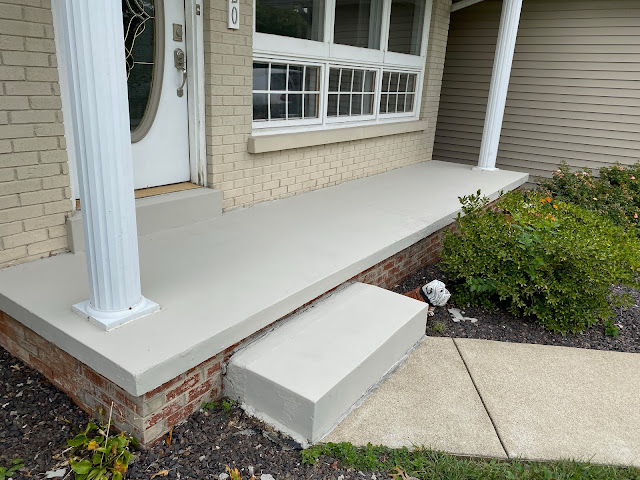 I did take the day off kinda after painting the two rooms inside on Wednesday. The only thing that kept that day off from a full day off, I spent about 15 minutes painting on the 2nd coat of paint on all of the porch, front, side edges and on top plus the step. After that ... no labor of any kind. Thursday morning my friend saw in the paper that four WWII airplanes were showing up at the Evansville Wartime Museum. That is a whole different long story that I will not get into, might later. We were back by 1pm after a great drive in the Z4 through the country roads of Vanderburgh County but we did not stay to see all four airplanes. 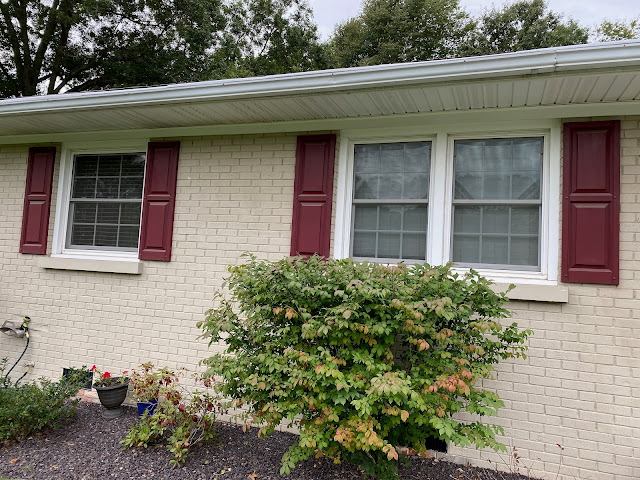 I knew what my next project would be and I was outside starting it on Friday morning just after the morning yard clean up. The hounds and even the dog were excited to be outside in the cooler weather. When Walter is spending time outside you know for sure it is not too hot. 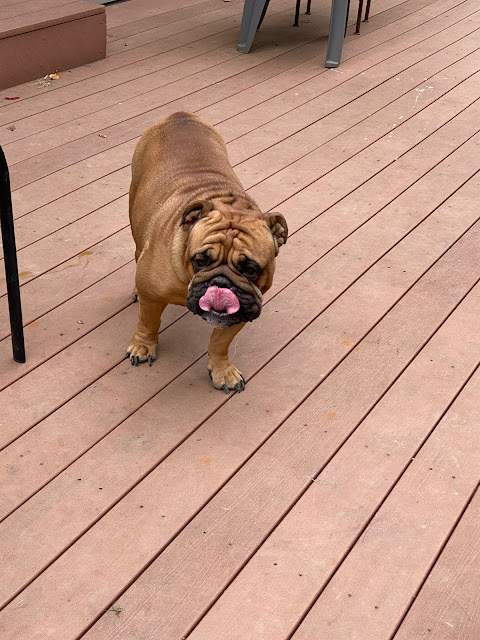 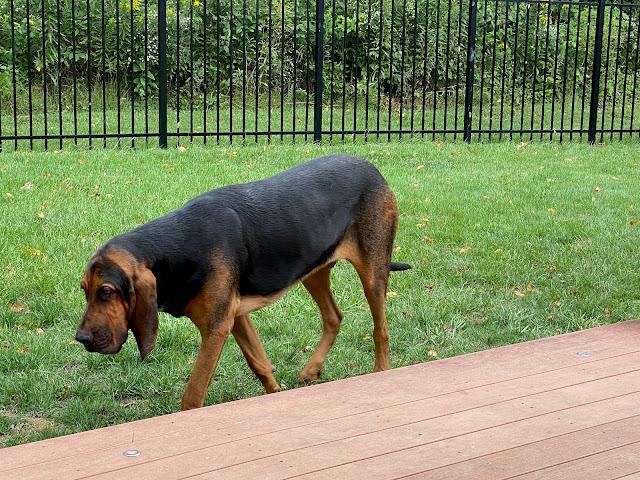 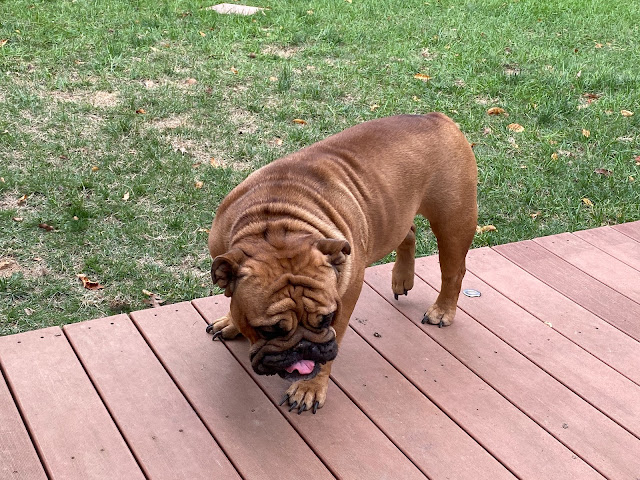 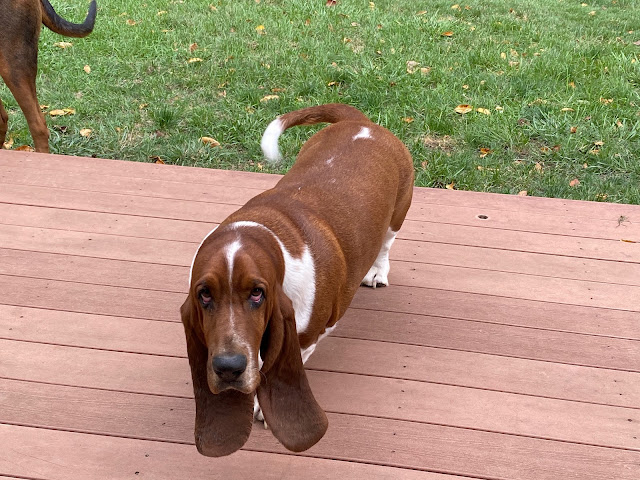 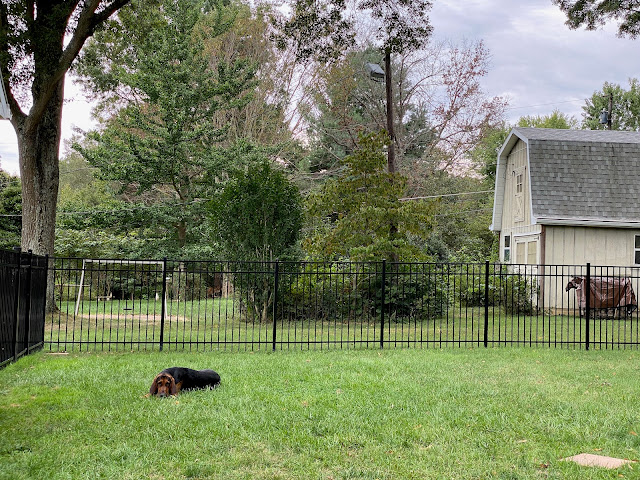 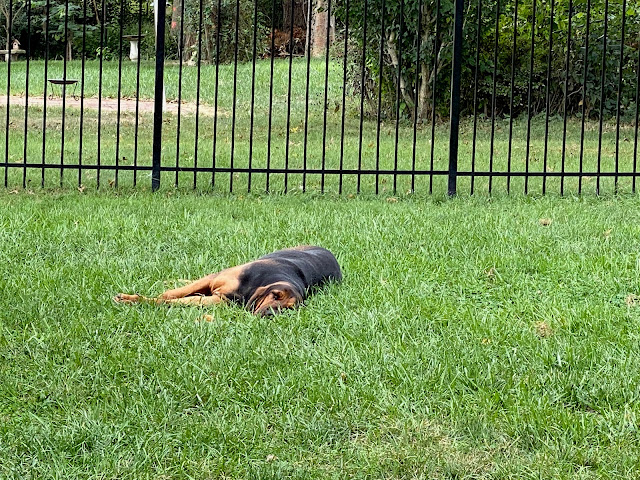 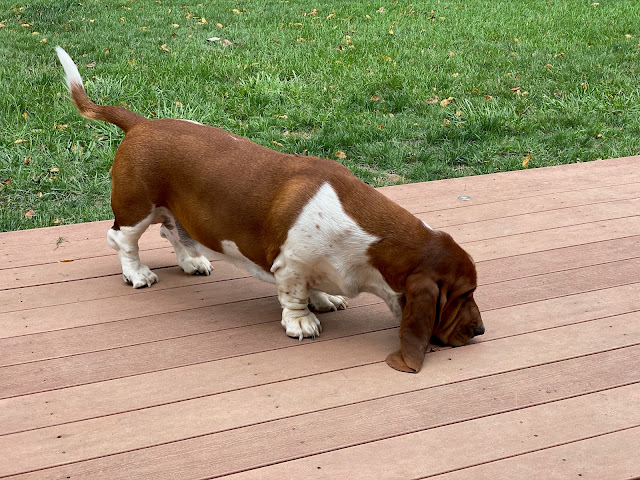 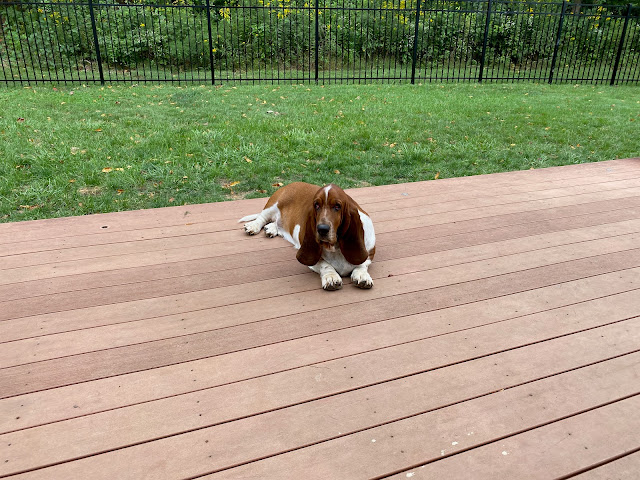 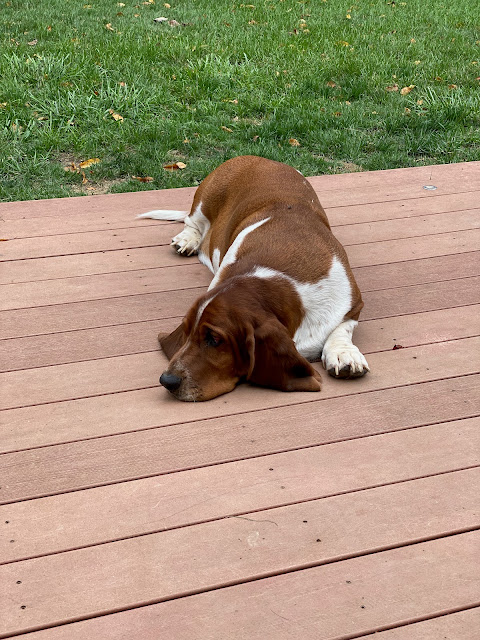 You would think that photos like that shows the hounds and the dog were okay with my new project and a larger fenced in area. I must have blacked out and didn't take any photos of what they did to my new ground cover but it was the same as last month. Some way they were able to pull any burlap out under the fence WITHOUT getting inside the fence. 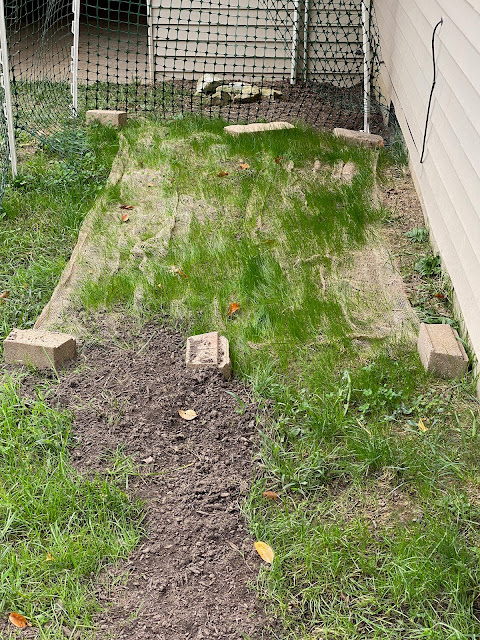 It all started a few weeks ago, a couple? where I raked the surface of the hard clay dirt, sprinkled grass seed on that hard bare clay with no top soil and then laid the successful burlap over the seed. It was nothing more than an experiment. I wanted to see if that burlap system worked on the worst of soil and yard area. (shade). Ten days later I am seeing new grass and a week later I needed to pull up the burlap. 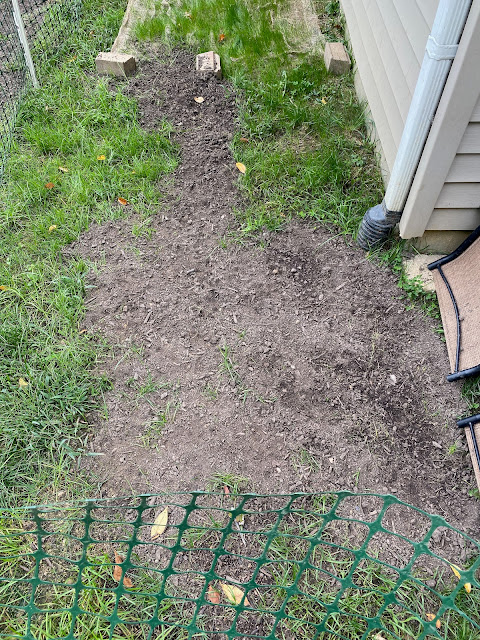 You might remember photos showing I had new grass where that dirt is. After the last rain that area flooded like always. Following the instructions from the landscape nursery, I added top soil to those low flooded areas. I personally decided to wait a week to see if the new grass would come up through the dirt but the soil was too deep to do that. So new seed and I moved the burlap to all the new top soil spots, inside and outside the fence. 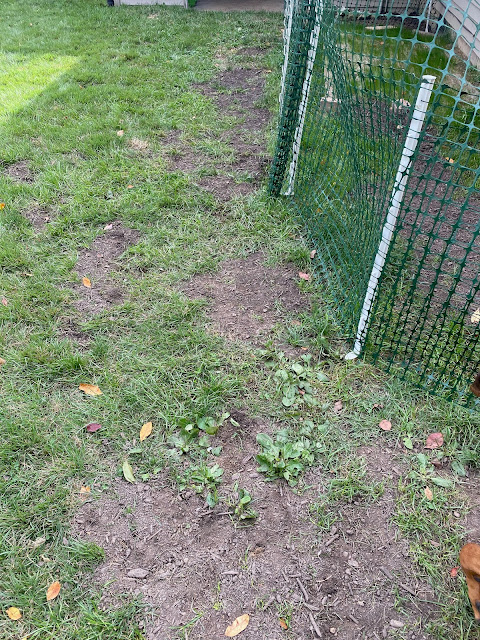 These were also low spots after the rain last week. The problem was I cut this grass too low last fall mowing leaves. That killed a lot of the grass which got worse after the winter rains and melting snow, leaving it an underwater yard. When I moved in, this area was full of grass and a few weeds. I feel it was user error and not climate change like some suggest. 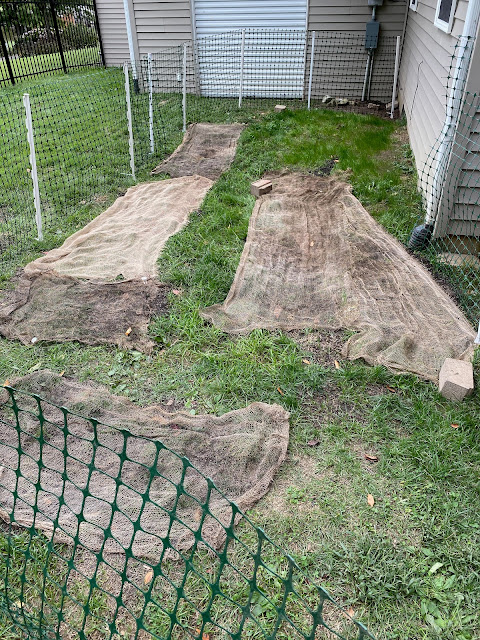 With more area to fence in to keep the dogs from walking on it, I had to expand my fence. I had enough plastic fencing but needed five more poles. While Lowes was packing up and palleting their landscape tools, and products, Home Depot is where I found the exact poles I needed. They were inside on the construction side of the building.

I made sure that all of those burlap covers that were near the fence were well inside the fence. If you remember last month, the two hounds were able to pull out that burlap under the fence. 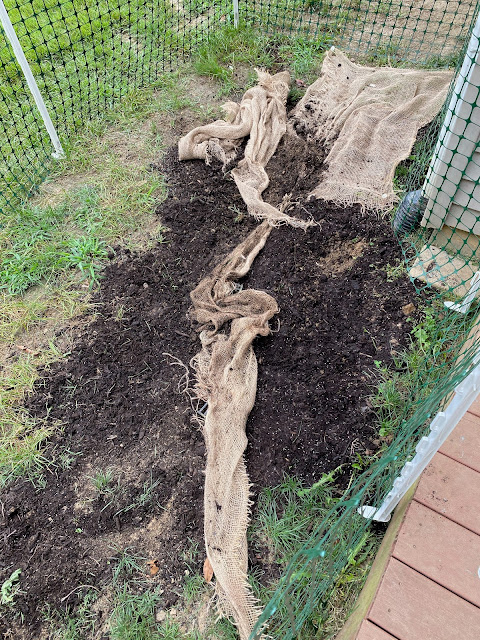 Here is a reminder how the hounds rearranged the burlap in August when they when they got inside the fence. 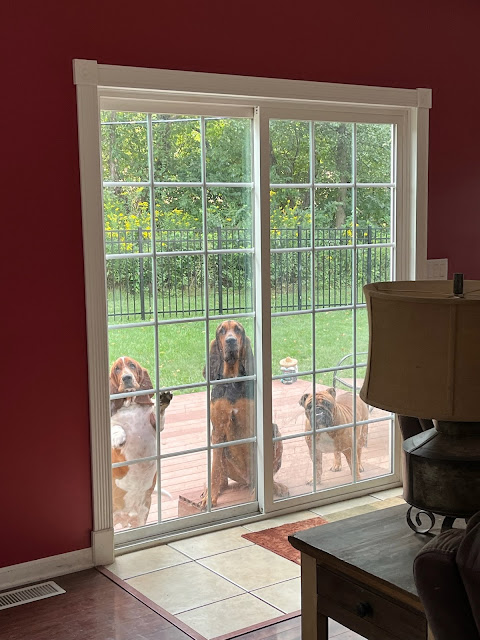 If you can see through that filthy dirty patio door, this is the procedure when some one comes over to visit or I am waiting on pizza delivery. They get so excited when someone comes over I have no other choice. Watson continues to jump on people when he sees them. Henry is jealous and will try jumping in between Watson and the person Watson has "mauled" while Walter is pressing his nose against their shoes to smell and try to identify who they are.

Now since Watson is bigger, even when he sees neighbors on the outside of the fence, he will jump vertically as high as he can as if he is trying to get eye level. I have NEVER had a bloodhound puppy or adult that has done this and acted this way. It really does drive me insane when it happens. If people step 4-5 feet away from the fence, he will try to get through the fence, flexing the aluminum.

Finally after about 5 minutes he will lay in the yard and let the neighbors and I finish out conversation.

Very very frustrating. Breeder told me last year to train him to keep from jumping using a choker collar and a 6' leash with a quick pull and release when he jumped on someone or up at someone. He was oblivious to that training and didn't do anything positive and only accelerated the problem as he would turn and fight me. I have tried ignoring him when I come home or friends will ignore him when they come over. NOTHING WORKS !!! 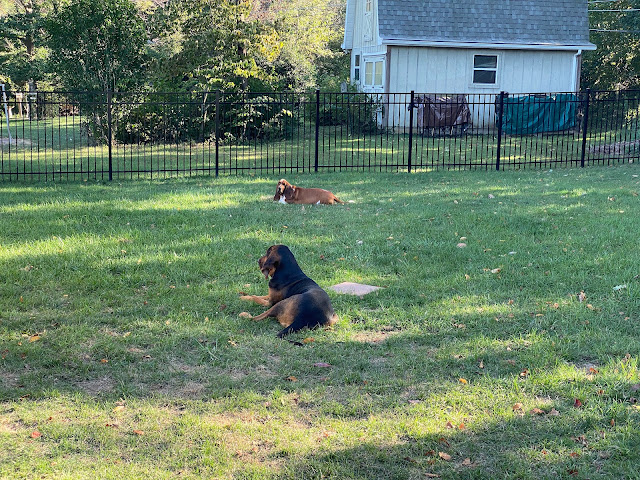 Here they are as I write this post. They do this a lot now that the temperatures have dropped about 20° from last Wednesday. Yet if someone were to step at the fence to pet them (doesn't happen anymore), Watson would be barking and baying the loudest he could and would be jumping straight up and down as high as possible, then try to burst through the weak aluminum fence.

So that is it from the past few days. My project starting tomorrow is a thorough house cleaning of all the walls, doors and baseboard. The color white looks nice but it is a constant battle to keep clean. After that I will be moving to finish the attempted repair by a contractor on the lower front windows in the living room. Then I will replace screen windows with new screens for the torn ones that Stella did last year. That will give me screen windows in the lower part in the living room and a screen patio door that Watson decided last summer to take out of his way to get in the house.

Great weather in "the tropics" of southern Indiana and a lot of weekend football games to watch on tv.