As much as I like my 1994 Chevy 2500 Cheyenne truck and it's temptation to use to save some money, I thought it might be uncomfortable for not only the hounds but also myself. Traveling on a single cab bench seat might not prove to be the right decision a 1,000 miles down the highway. The hounds love the ride in the truck to the vet but that is only 24 miles round trip. A lot different than traveling 1500 miles to get there and then through the western states. The more I thought about it, the more I knew three things.

The crew cab for the hounds and the HD and 4x4 to keep me out of trouble.Now I can tow anything I want. I have no desire to tow a 'house' but at least this gets me out of the range of 18' trailers.

It's strange how putting pictures of things you want work, but a few weeks ago when I decided to sell the Class C and go the truck/trailer combo, I changed my desktop picture on my iMac to my friends picture of his 2003 Chevy Silverado towing a trailer in Utah. Well today I bought a 2006 Chevy Silverado about the same color as my friends.

The day started with me heading to Bloomington to check out a truck I had seen on a local website. A Chevy 2500 4x4 that was priced fair but since those lower priced (less than $25K) don't seem to hang around long in this area, I realized there was a chance it might be sold. I was right. I got to the car lot early Wednesday morning to find out it sold the night before and had not been updated on the dealer's website yet. So I drove down the street to a friend of mine's car lot, one where I have bought a few (my addiction) cars from him. He usually has a good choice of used trucks to choose from.

So really for the first time in my life, I pretty well knew what I was looking for and what price range I would settle for. He will budge some on his prices but not much. As I pulled in he was taking pictures of a truck that had just been detailed that morning and had been parked not 5 minutes before I got there. He had the trucks I had seen on his website but they were more than I wanted to pay. I didn't drive over to look at those. I was wanting to see if something might have just come into his lot or at least let him know what I was looking for.

He was taking pictures of a 2006 Chevy Silverado 2500HD, 4x4, Crew Cab (4 doors), short bed. It was one of my favorite colors, light between a silver and gold. I checked it out from bumper to bumper, including scooting on my back to check out the underside of the truck. It had only a couple of small dings in the body, nothing major and to be honest I always like a truck that has kinda a used look to it. Not trashed out but not showroom quality either, because it is going to get used off-road and about once per year I make a mistake (joke) that causes slight damage.

By the time I crawled out from under the truck, with a satisfactory inspection, he was back from his office tossing me the keys and told me to call him if I got it hung up someplace. Good salesman eh?? He already knows I have the bait in my mouth and very close of being hooked. Well to say the least, it drove like a dream. Smooth quiet and had power when I needed it. A lot of room inside front and back. Great condition. No rust, which is rare for a Midwestern truck.

So here is the new tow vehicle with the hounds starting their inspection: 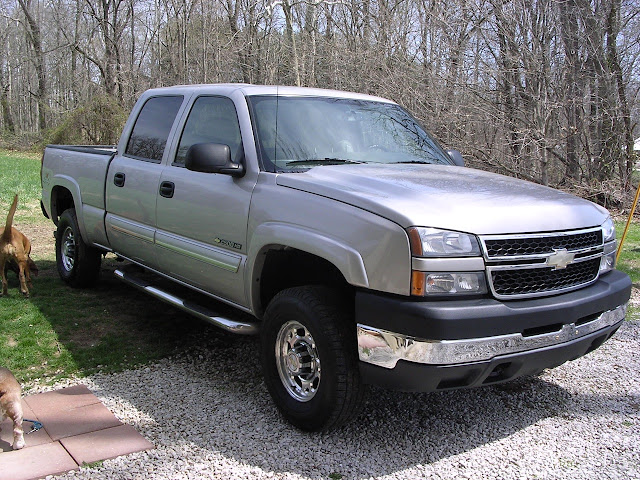 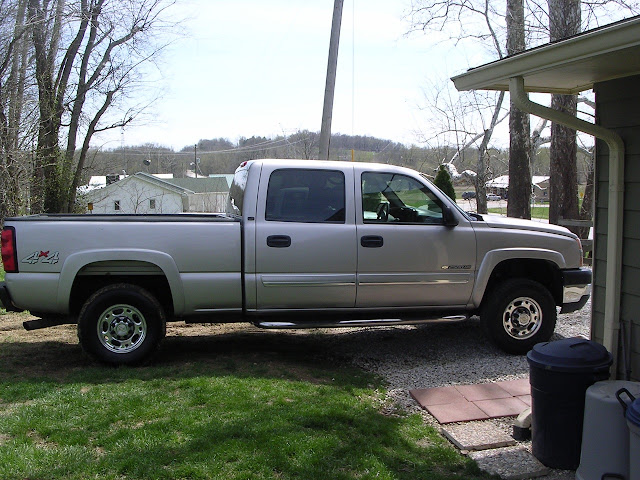 Now that has been taken care of, it is time to find something to live in. My plans seem to be moving on right on schedule. This retirement life isn't a bad deal, I like it.
at April 16, 2014