Since having time off, I no longer multi-task. It's one project per day. Today was borderline because I did two or three things to get them out of the way. I started the morning off by taking the newly purchased truck back over to the dealership twenty-five miles away to pick up the title. The plan was to transfer my plates from my 1994 Chevy truck to the 2006 Chevy truck since I had just paid for new truck plates for 2015. That did happen without a problem later in the afternoon which is a surprise because nothing is easy at the BMV. While at the dealership I was talking to the owner about his experiences in towing trailers and truck camping trailers. He normally will use them on hunting or fishing trips for a couple of weeks in the year.

He said an interesting thing about trailers, campers, Class C and even the huge Class A. It was something I noticed while I sat in the Class C while it was covered in snow this winter. He said "the longer you stay in them the smaller they FEEL" ... no matter what the RV is. I made note of that. The 2500 HD 4x4 truck rides nice, is quiet and very comfortably cruising down the highway, so I decided to multi-task, go on a mini-road trip.

I decided to go about 50 miles further south of my house to check out a trailer I had seen on the internet. This place was out in the country, small town and I can't say if the highway it was on was a major one? It was out in the middle of nowhere, very little traffic but this place was servicing Class A's that cost $250K to $500K. They had a good selection of trailers. The person showing me the trailer was not only honest but possibly a little too honest to be in sales ... if you know what I mean. 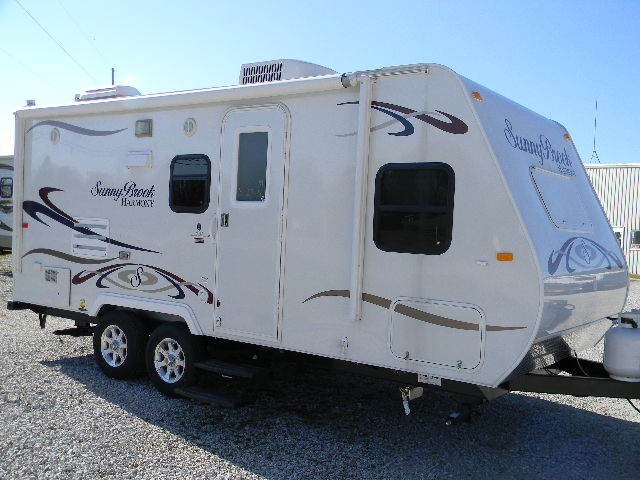 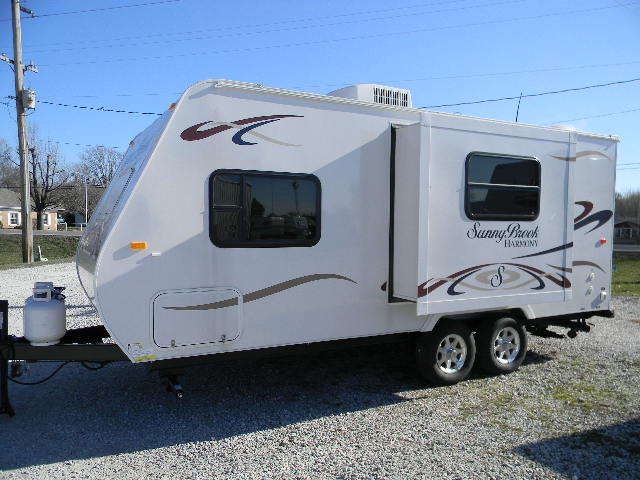 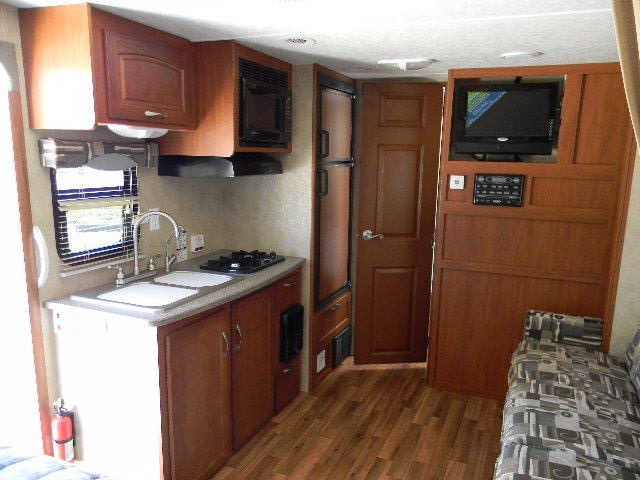 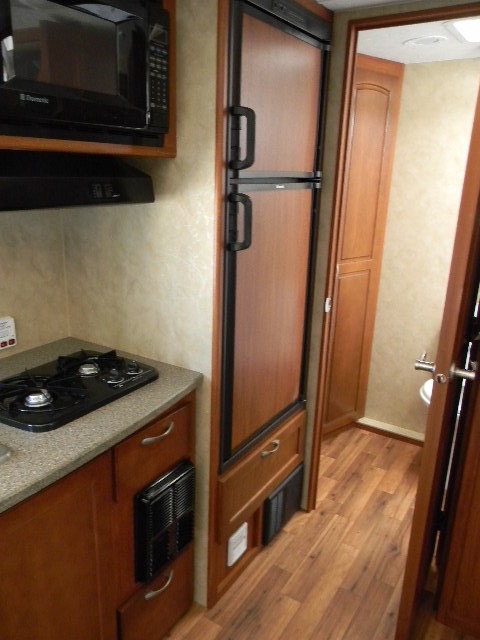 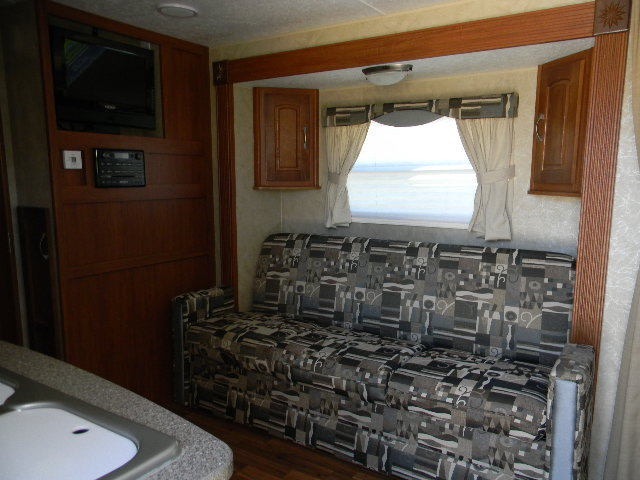 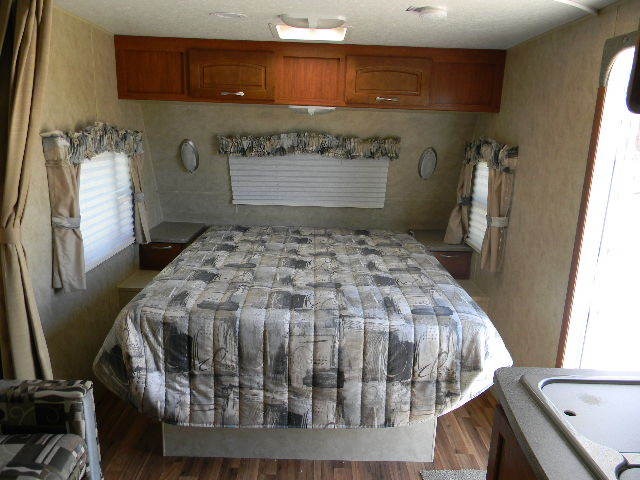 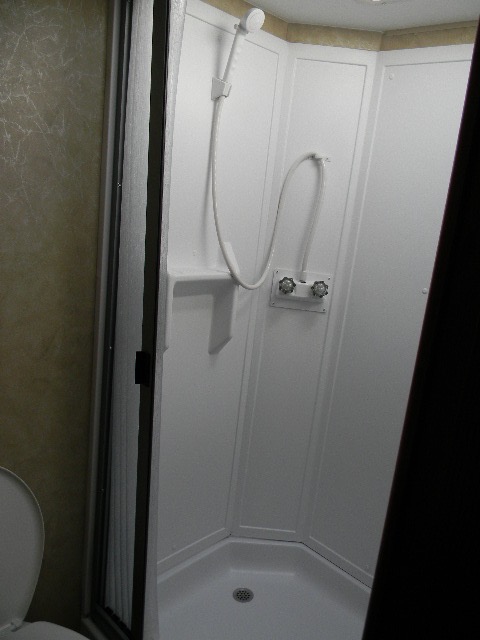 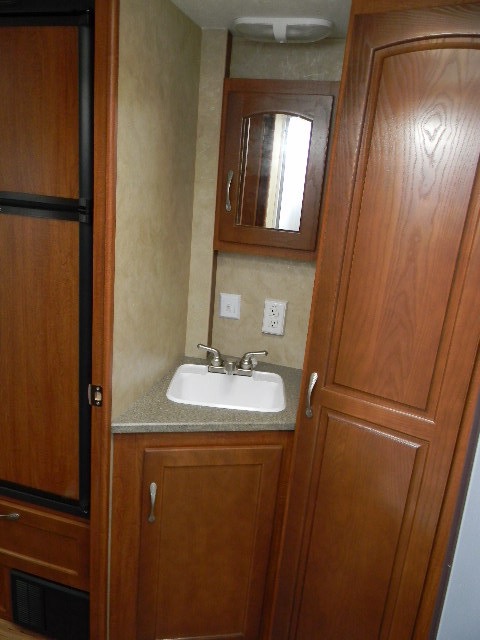 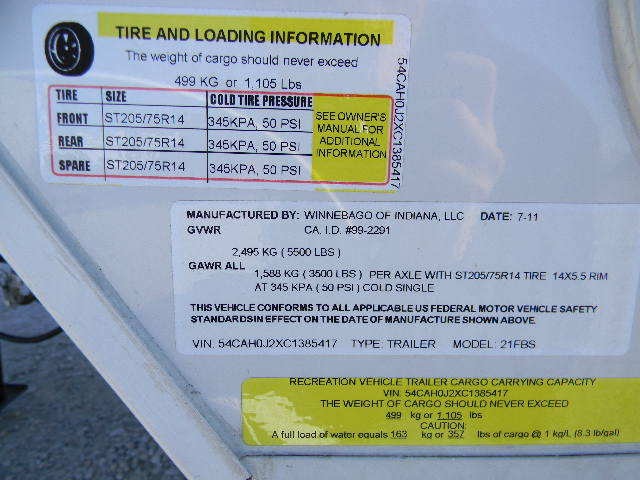 One of the admins on the rvforum dot net, mentioned that Sunny Brook made good quality trailers and might be something to check out. As far as the quality of components, flooring, couch material and bed mattress he was right. This 22' trailer had a small slide out which gave the trailer enough floor space to get me to consider this. It had much more room than my Class C and it was a "new" 2012 model, no longer made. Then he said something interesting that was a deal killer. "We have had some water damage to the floor under the couch due to a leak in the slide out". They were repairing it and correcting some things to prevent it taking place a second time but I didn't want to take that chance.

I could not see this trailer surviving long on a dirt, gravel or uneven roads. I probably wont go to the extreme of staying in place like Sebastian does but similar to AL & KELLY, Paul & Nina and RVsue. At times I'd like to do what Chinle does over at the Spotted Dog Ranch leaving the trailer at the camp and tent camping further off the grid for a few days in good weather.

As you notice this post is about a trailer, not a truck camper. I was kind of leaning this way after I got an accurate measurement of the bloodhound while she was sleeping last night, snoring through the measurements I took. I quietly got my Stanley tape measure out and went from the tip of her nose to her hips ... she's long ... LOL.  I went from top of her hips to the bottom of her feet as she laid on her side, she's taller than the truck camper isle is wide. She would take MORE THAN the majority of the floor space in a truck camper. That doesn't include the other two basset hounds which are also long, even with extremely short legs.

Two that come to mind ... Nash and Arctic Fox. A couple of the bloggers I follow travel full-time in an Arctic Fox while Sebastian full-times in a Nash Trailer.

The choices are decreasing and the options are down to a couple I believe.
at April 22, 2014