I had a comment from Tom a couple of days ago, that his best pictures of his dog were taken at below eye level. He even mentioned that might be hard to do with Heidi ... I found out yesterday it was doable but interesting laying on the ground looking up or close to eye level with two basset hounds. During the process I may have taken "the best" picture I have ever taken of Winston after 10 years. Here is that picture. Of course when I got down on the ground with a camera in one hand, all three hounds thought I was either hurt or playing, and either way they were all going to run to me and make sure I was ok or find out what the playing strategy was. I mean it was three hound heads right on my face and Sadie's paw in the middle of my chest.  lol

I got back to my feet, took Sadie over to where I could connect her to her anchored rope. Of course that made her quite curious on what was going on because both basset hounds were able to walk or run freely. She was confused right before I walked over to hook her up, at least she stayed there to pose for a picture. 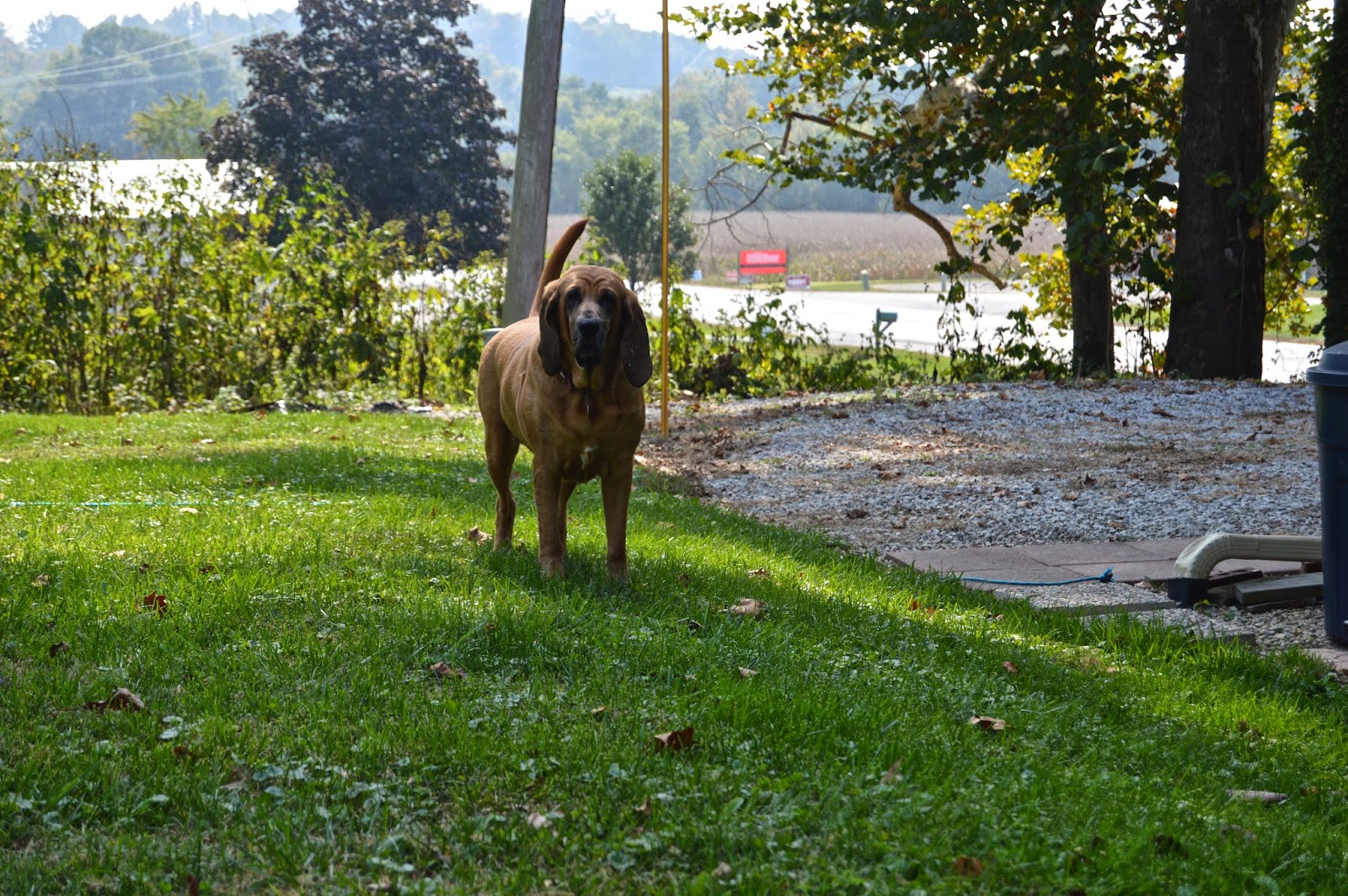 As soon as Heidi saw that Sadie was hooked up and she could get out of Sadie's range, she took off sprinting ... it surprised me enough that I didn't have the camera ready to take a really good picture but did take one that was a little blurry. 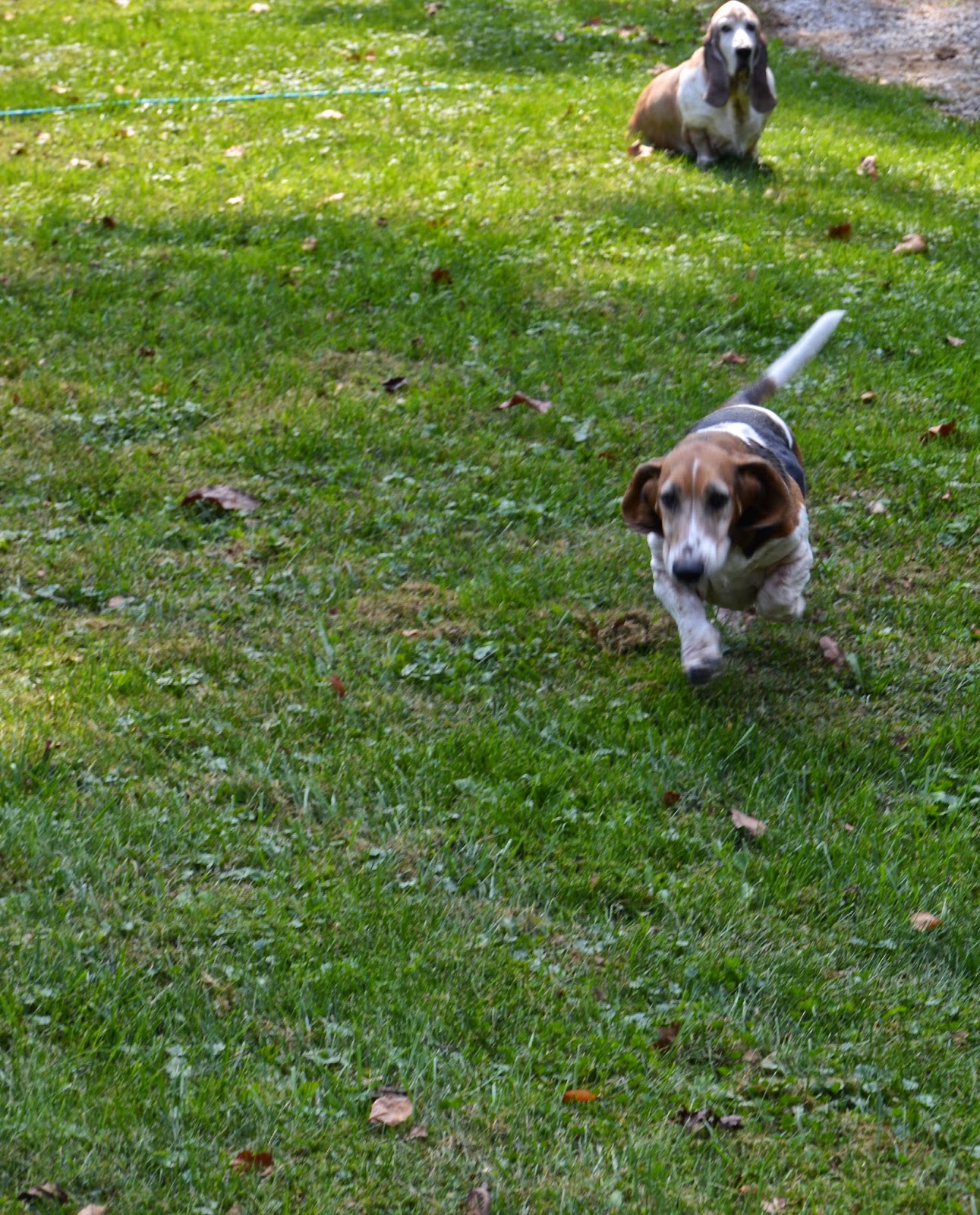 With the two bassets now in a relaxed mode, I was able to lay at the base of a very small incline in the yard. That position got me close to their eye level. After I looked at the pictures I had to agree with what Tom said, I thought they were much better pictures when taking them at below eye level or in the basset hound's case ... "close" to eye level. It could be hard to do that the majority of the time though. 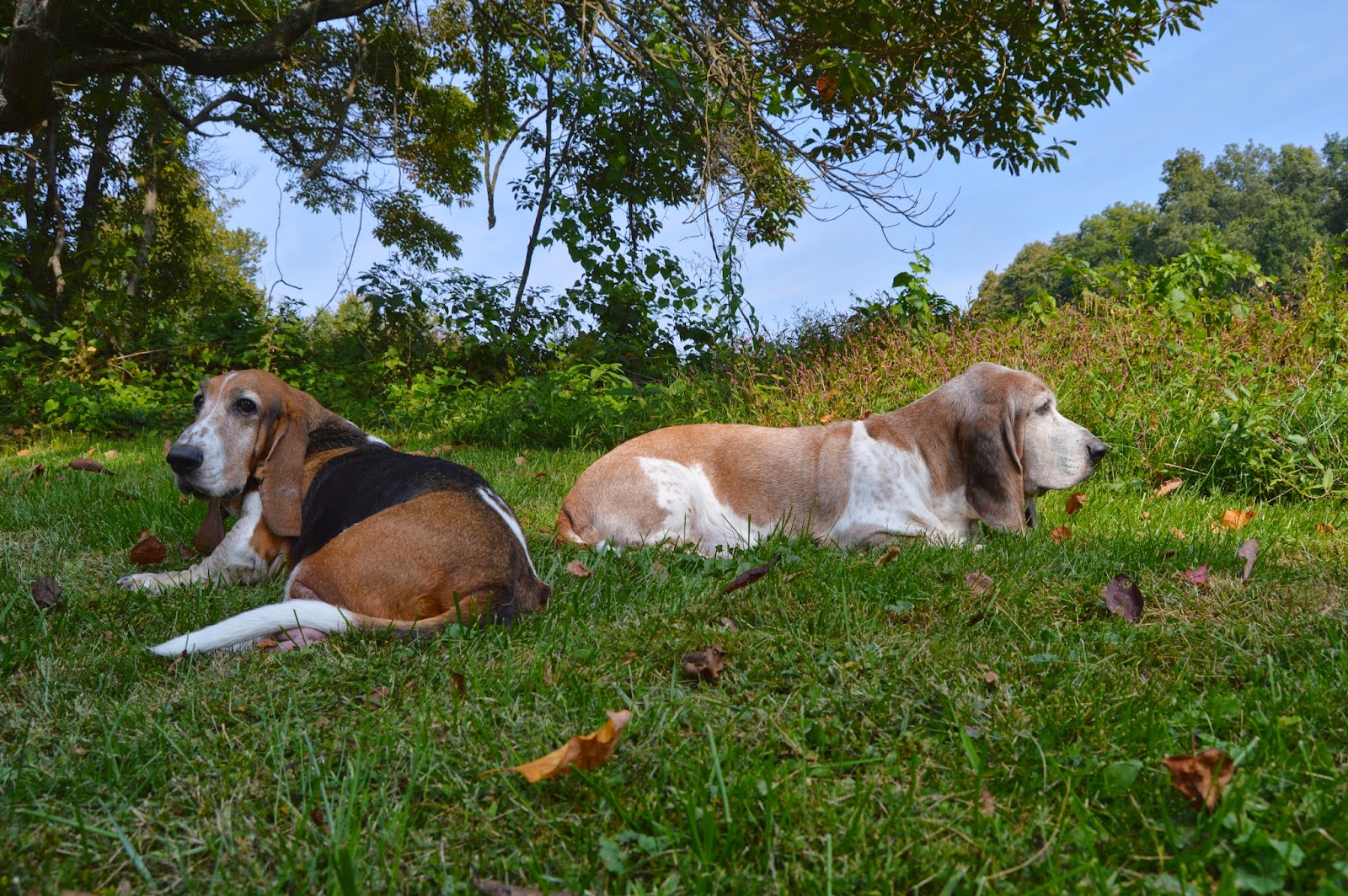 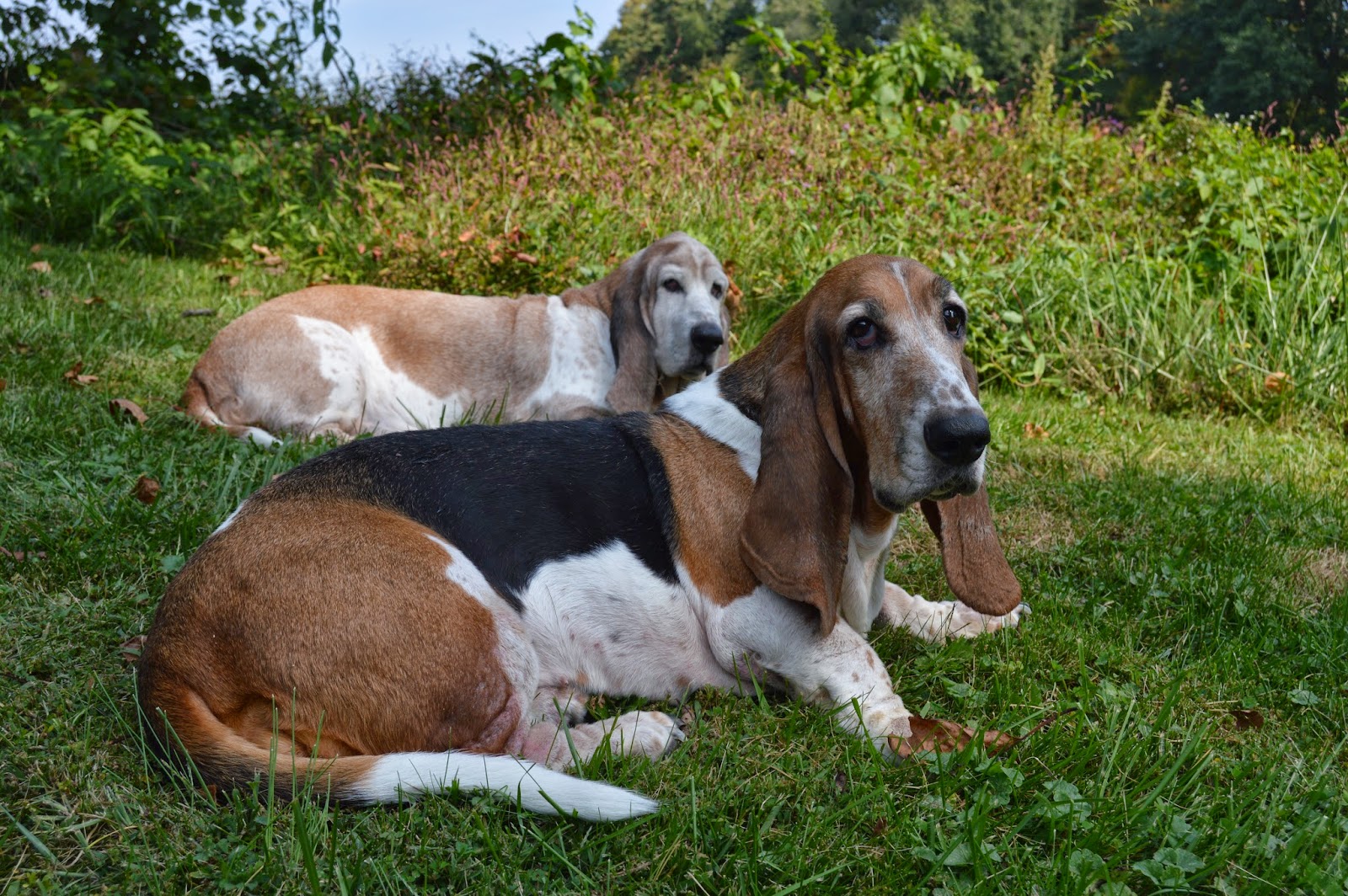 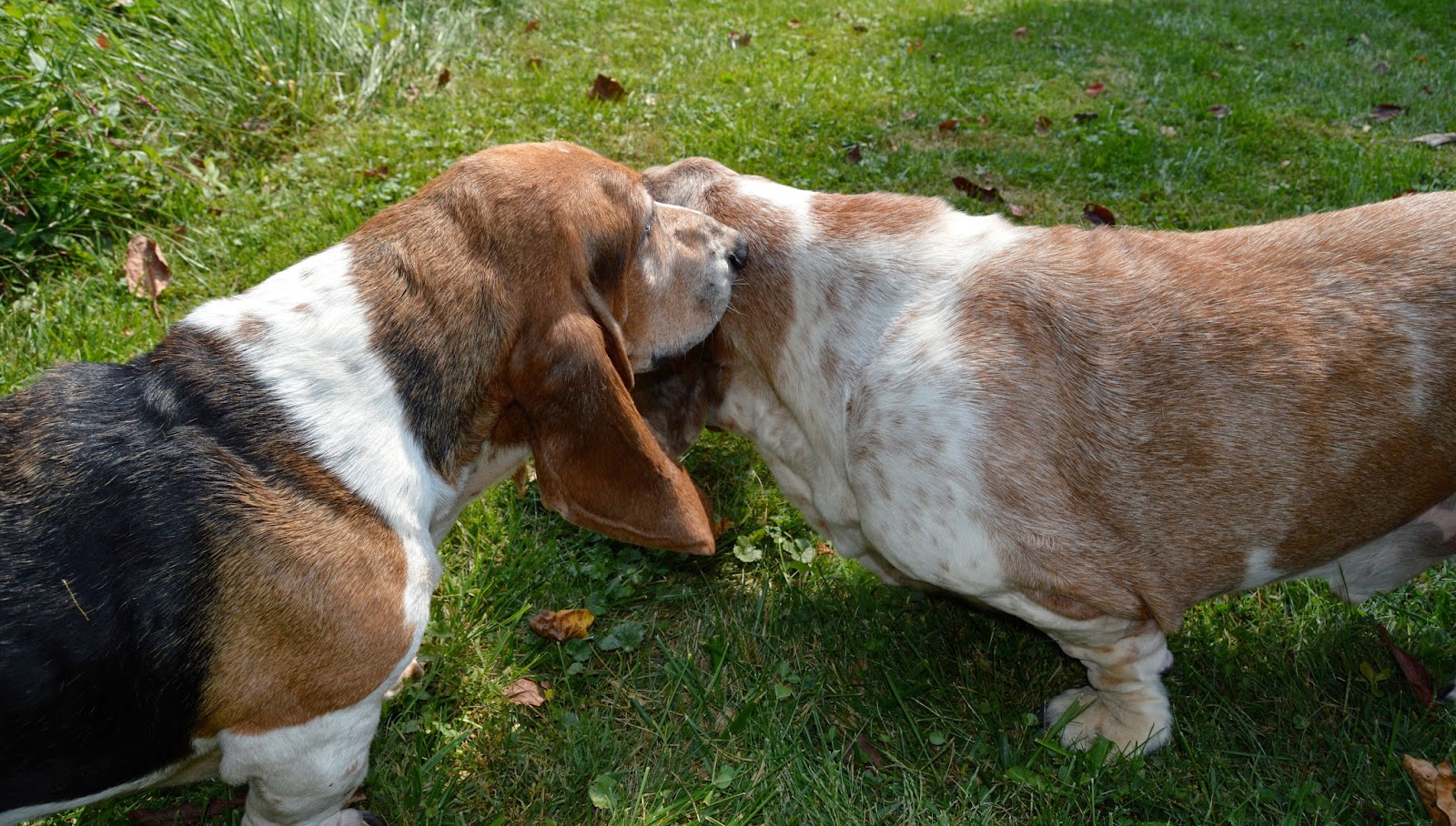 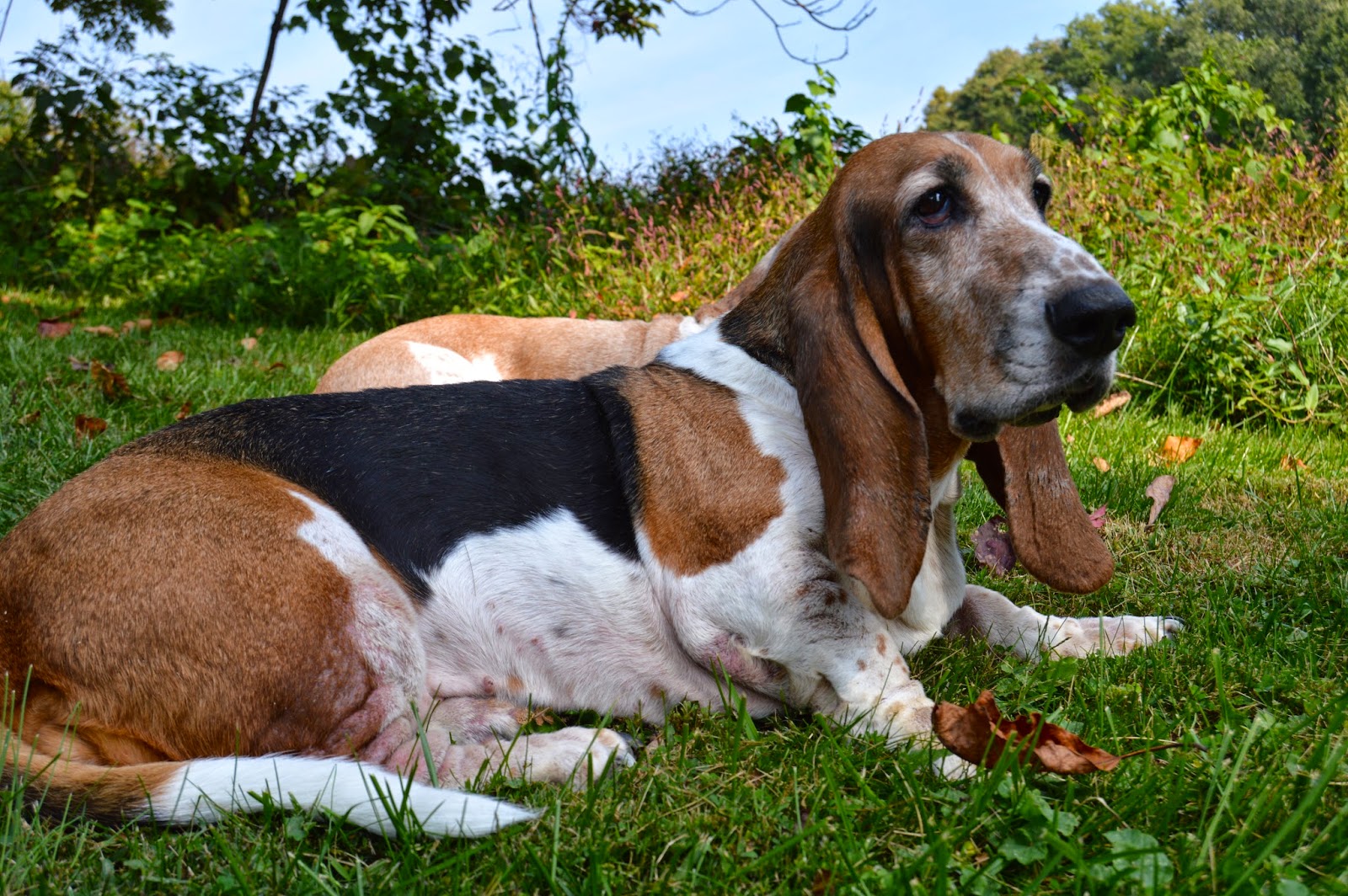 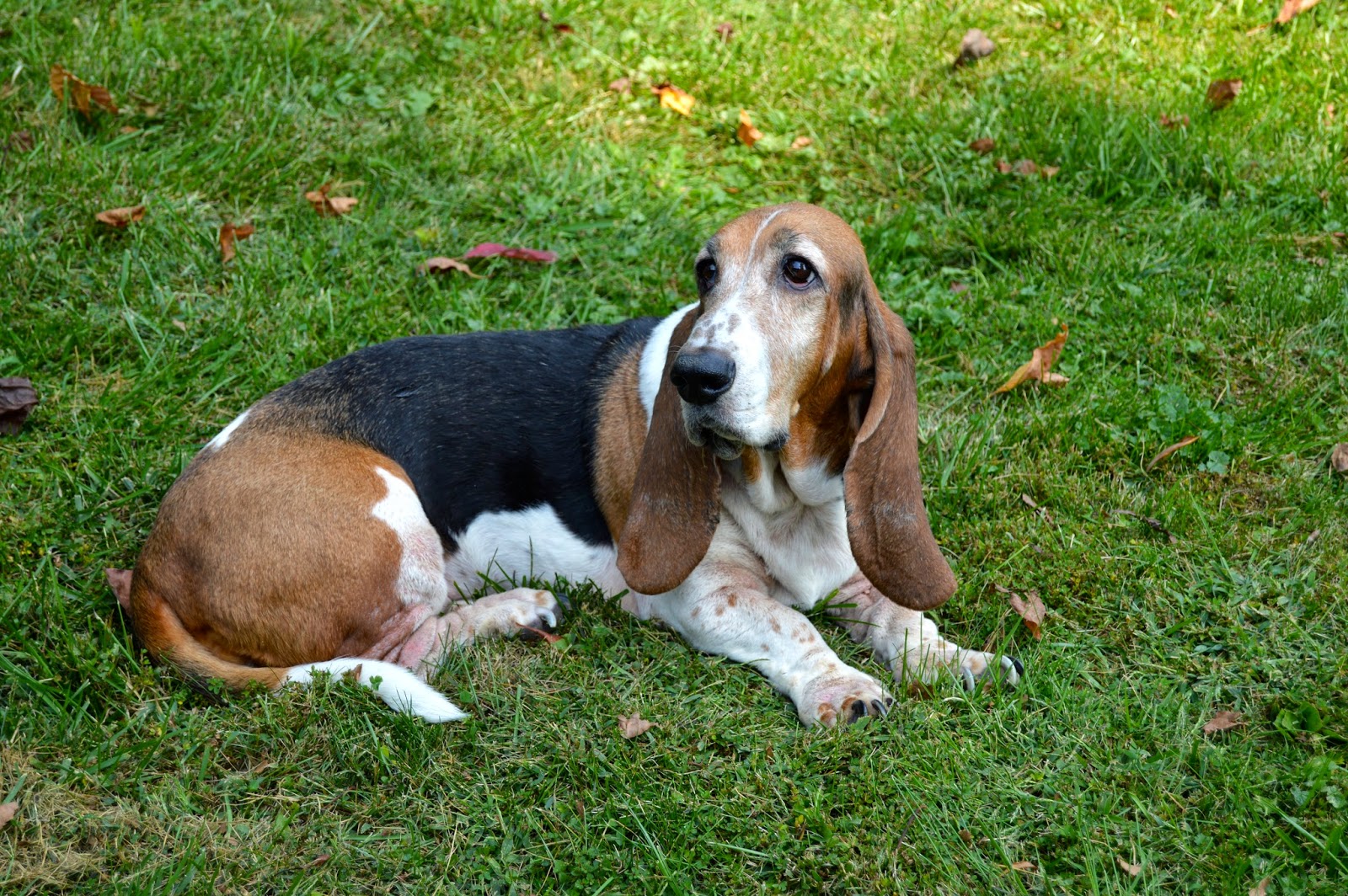 As you see, after a few short weeks from receiving an allergy shot, Heidi's skin rash is coming back on her lower rear legs and all four feet. They are worse this morning as I type this. I have a couple of new things to try that fellow readers have suggested. I will try those separately to see if/what works and hopefully will not do any more shots.

I knew it was a picture editor and storage but I thought it was located on the web, not on my hard drive.

After playing around with Picasa 3.9 some more, I decided to stick to the web based Flickr. I like the program a lot. The main reason I was looking for a different storage program for all of my pictures to begin with ... I wanted them stored "off location" in case my computer crashes or I have a problem with the external hard drive backup.

It is a long process uploading them to Flickr and I found out yesterday it sucks up a lot of my monthly internet data limit of 15Gb's per month. Just like any other website when you are uploading files, it uses a lot of data. I do have a free period of unlimited data I can use between midnight and 5am, so I will do my Flickr uploads after midnight.

I'm sure most of you have heard in the news about all the trouble Apple is having with their latest iOS 8.0 update. They came out with a fix to those problems in 8.0.2. I did some reading online at MacRumors Forum to find out what the geeks were saying and as well as the normal users like me. I normally hold off before doing any new updates to the iOS, but I wanted to check out this new Health program that Apple has doing ... it basically can track about everything imaginable about your health, even your sleep routine, without any wrist devices.

With a lot of users not having problems of any kind and after a lot of reading, I thought it was safe to do the updates to my iPhone 5s and my iPad Mini. There is the option of doing these downloads (huge file) via wifi but I was reading on that geek forum, it was recommended to do the following simple steps:

For Apple devices only !!!

1. Do not use wifi, plug your device into your computer and use iTunes to update.
2. Download only ... do not do the download and install option.
3. After the download is complete, back up your device to your computer, not iCloud.
4. In your device settings, under the general, reset, click "reset all settings".
5. Install the update
6. Set up device like a new devise.
7. Then restore from backup.

One important thing is NOT to sign up for iCloud Drive yet. That causes a big problem of losing documents in some cases if you have saved your documents to iCloud Drive. It will not work until the new OS update for Mac comes out in a few months, called Yosemite.

Now, once that OS update does come out for iMacs, Macbook Pros and Mac Air .. called Yosemite ... and you activate iCloud Drive ... you will be able to use the Office programs in all three devises and even start an email or work on one device while finishing it on your other device.

Right now I think the iOS 8.0.2 is worth it, just to be able to use Apple's new "HealthKit"....which is called just "Health" once that program is automatically uploaded during the update.

After my updates to both devices, I've had zero problems and have seen nothing going on with my two devices that i have heard on the news. At least in my case iOS 8.0.2 works great.

For Window readers, what I have just said will probably confuse some. I am not sure what PC users have the ability to do with these new Apple apps because I don't have Windows PC. For Apple readers, I hope this information helps.

To close this post that has turned out longer than I planned ... I thought my iPhone took great pictures when using it most of the time for the past couple of years. As it should, the Nikon D3200 takes so much better pictures it's hard to describe. I am really happy that I made the camera purchase.