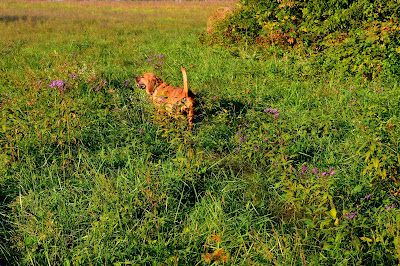 When Sadie was born I had no idea she would be my next bloodhound. I didn't even know of her even though her litter was just a few miles outside of town.

At the time it was just Winston and I but he had lost his best friend Bertha (a bloodhound) almost two months before. He stopped eating for a while soon after she passed. It was bad enough that I had to take him to the vet to see what was going on. Many people say dogs cannot nor will they show any emotions when another hound dies. I have to disagree with that.

Anyway Sadie was not the first choice when I first saw the litter. Her dad was a big loud tan bloodhound while her mom was a mellow black and tan. I was more interested in the tans which would eventually turn red. A few weeks later I took Winston with me to see what he thought of the 8 bloodhound puppies. Well out of eight of them Sadie was the only pup that followed Winston where ever he walked. She would snip at his heels, trying to get him to play. She barked and howled at him.

I thought that was a good sign, so I told the breeder that I had changed my mind and I would take Sadie instead of my first choice, which was a mellow female. Simply because Sadie showed an interest in Winston and he played with her. Little did I know that Sadie would act like her big loud bloodhound dad.

Sorry that I have no photos of that time period. Due to an interruption while backing up my files during that time on my PC I had a lapse of memory. A few weeks later assuming I had backed up those photos and other files onto my external drive ... I reformatted my hard drive to clear out all of the malware I was getting on my Windows PC. Only afterward, when I tried restoring those photos from my backed up external hard drive ... nothing was there.

So all the photos I took of Sadie for her first year as a pup were lost.  There were some great puppy shots. 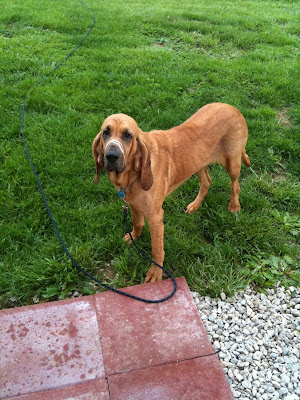 Her first two years she was nothing but skin, bones, legs and ears. But she was a hand full. She ate every amount of food I put down for her but never gained weight. She was very particular that her water and food dish were not moved from the first spot they were in. I tried to raise both dishes to an elevated stand as recommended for large breeds .. to prevent possible bloating.

She went on a hunger strike until both bowls were put back on the floor where they were before. Even now if I move the bowl she will not eat. She was the most obnoxious puppy I had in 30 years of having bassets or bloodhounds. Destruction was her middle name. While I was at work I'd have to kennel her inside. I had the biggest black dog kennel money would buy that was made for indoors.

I came home one day and she must have been jumping inside the kennel moving it to where she wanted because it was 3' from where it was sitting when I left that morning. She gave me that bloodhound stare as if nothing had gone on all day.

Another time she had tried chewing her way out of a heavy duty kennel. Someway she had fit her lower and upper jaws around two of the very thick and hard metal wires of the kennel and bent them. Squeezed them together.

What was amazing about that, I could not bend them back with pliers nor could I replicate what she had done with pliers. Her jaws were that strong. If there was an accident waiting to happen, she was there when it did. From flipping full 5 qt water bowls full of water into the air while running to her food bowl, or knocking the closet doors off the tracks once she shut herself inside the closet and the time hitting me full speed from behind at the knee knocking me down ... that was Sadie. She was funny, playful and clumsy as a puppy.

She gradually grew out of all of that or should I say most of that. The kennel was sold, she became a true house dog while getting into things only on occasions when I was out of the house. While mowing the yard or getting ready for work in the mornings, she would try to get into the container of dry kibble and help herself to a free meal.

She would succeed at times but would be back on her dog bed before I could catch her, acting as if she had never moved. Even today, 7 years later I have to close the bedroom door so she doesn't roam the house while I am mowing the yard. Plus I have to set up a baby gate to block her way of getting into the closets.

The new dry food container I bought right before our trip has stopped her from getting into the dog food. With a hard plastic case and a lid that screws on, there is nothing she can do. IF... she can get into that container, then she deserves to eat all the dog food she wants.

Her favorite thing USE TO BE, chewing the plastic tip off of only one shoestring per shoe but multiple shoes. Now those expensive Nikes, Adidas or  New Balance are stored on the top shelf in the closet instead of the floor .. just in case she gets by the baby gate someway and can open the doors.

As far as bones that she doesn't destroy ... this is just one of them. Well worth the money spent to keep her occupied during the day or night.

I found out years later from a bloodhound breeder that ended up with Sadie's father, that after 5 questions where I answered 4 of them in a way that led the breeder to tell me if she had Sadie as a puppy she would be given Sadie to police departments, or rescue's because of her strong nose and tracking abilities. Those 4 answers I gave showed that Sadie was a tracker ... not a couch potato.

That breeder would have given me a different puppy. One sign that she was a tracker, was the day she followed Winston around the yard as a 10 week old pup. What I thought was a good sign turned out to be the wrong kind of read.

We have worked everything out though. She has turned into a great house dog. Smarter than a whip, a very funny personality and a big lovable bloodhound. Her separation anxiety seems to have stopped as well as destroying things.

So 7 years and still a mischievous bloodhound. Here are some of the better photos of her since year two.