It Was Hound Bath Day In The Tropics

As usual when I plan to do just one thing, I end up doing things unexpected. The plan was a bath for only Heidi. She was due after laying in the dirt when camping plus it was also time to wash some of that dead skin from her healing process from the skin allergies she has had over the winter. She doesn't mind baths. Her ears stay clean which is strange for a hound with long overlapping ears. She didn't mind getting her nails cut .. but a 'dog bone' bribe had to be part of the process to get that done.

This photo was taken right after her bath and towel dry. For those that have been following long enough, I think you can see improvement in her skin condition all without any medications in the pat 2-1/2 months.


Sadie on the other had sprints away as far as possible when she hears me say the word bath to either Heidi or Winston. Since the house is small she cannot sprint to far away but she does make sure she is not the one standing in the tub about to be sprayed. This consists of her hiding under the coffee table, the kitchen table or between the bed and bedroom wall. Anything to keep from getting a bath.

On a rare note, after some coaxing, some 'dog bone" bribery, with some slow motion with the nail clippers. She stood while I took one paw at a time and cut her nails. She never flinched and seemed to prefer having them done standing up, while the other two hounds like lying down when getting theirs cut.

Sadie also helped supervising Winston how to dry off in the grass and also coached him into following her instructions. Still at the end of the day, she was pretty proud that all she had was her nails cut and her ears cleaned.

When I asked Winston if he wanted a bath ... Mr. Laidback Nothing Bothers Me Winston ... wagged his tail and walked from the kitchen into the bathroom to stand next to the tub. Unlike Heidi who likes to stand, he wanted to lay down in the water. It's hard enough to wash a hound with a low stomach but when laying down and not moving ... it's next to impossible.

Needless to say ... there were no photos of the bathing process, only after shots.

A towel, then a dog chamois towel dry didn't do much for him. The water just seemed to stick to his hair. Since it was 84° and had a heat index of 90° I decided that if he went outside and ran a few laps around the yard and and used the grass, he could naturally dry off like 90% of the dogs do in the USA.

I can't say he ran many laps around the yard, if any at all, but he did trot out to the yard to start his drying process. Here are some photos of Winston getting the job done. 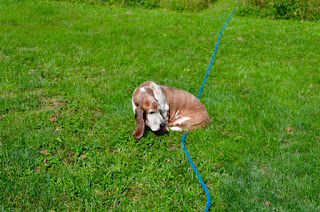 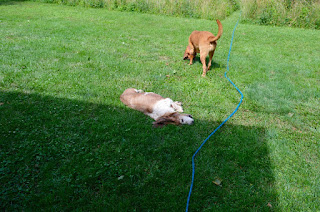 Well back to the list of things to do. I can still get some things done tonight but the week ahead is booked solid with stuff to do and places to go. Besides that sunshine of today is gone and it's back to raining again. I just received a tornado warning text for my county from the nearest tv station. 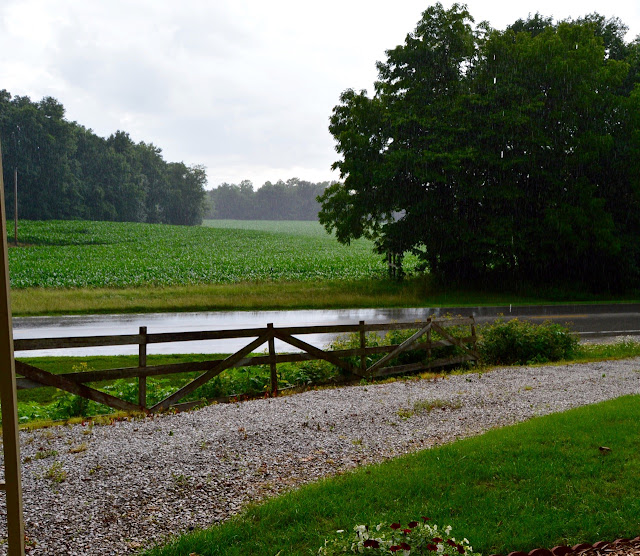