I'm Stuck In The Land Of Laziness 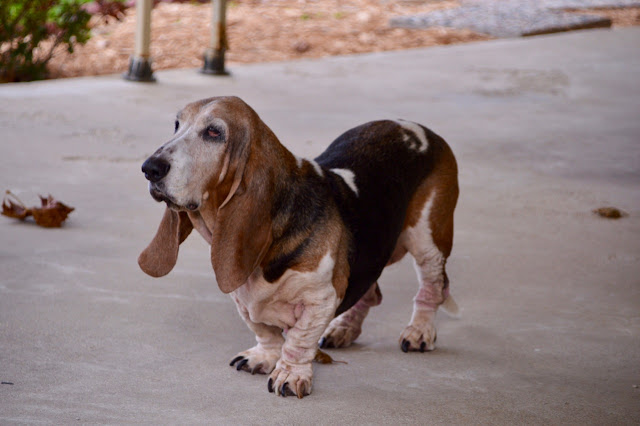 With a forecast of a possible high of 70° today, Heidi was thinking it might have to hurry up to get that high by the way it felt a little after 10am. It was the coldest 58° she had felt and she wasn't sure what she was doing outside when the only reason she was barking nonstop inside was for lunch to be served. Lunch kibble at 10:15am is just a little too early. She stayed and explored the yard while Stella and I did our morning walk. 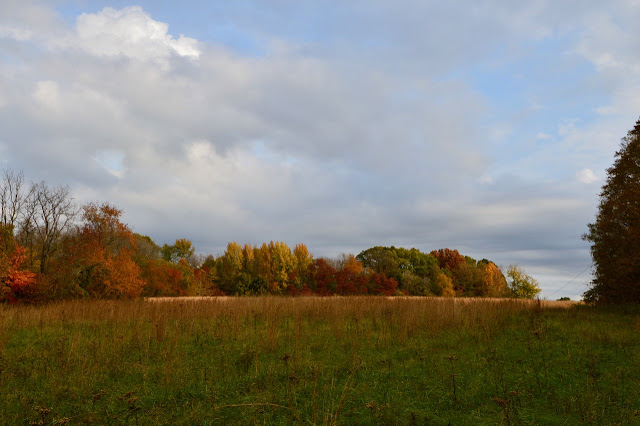 Stella was all over the field this morning, hopping in the air when she wanted to change direction. I took a lot of photos to capture that and only one of them barely caught her with her rear feet raised off the ground. 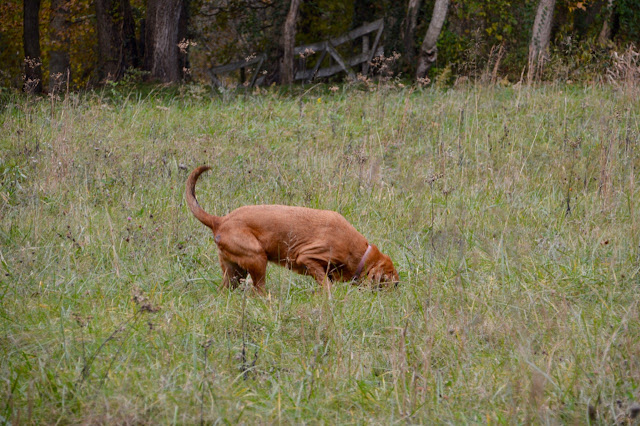 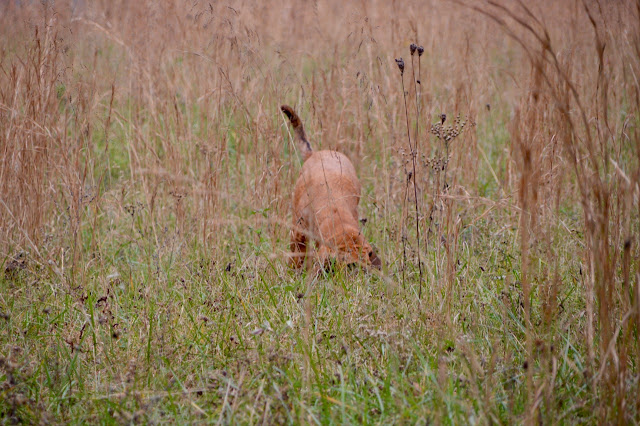 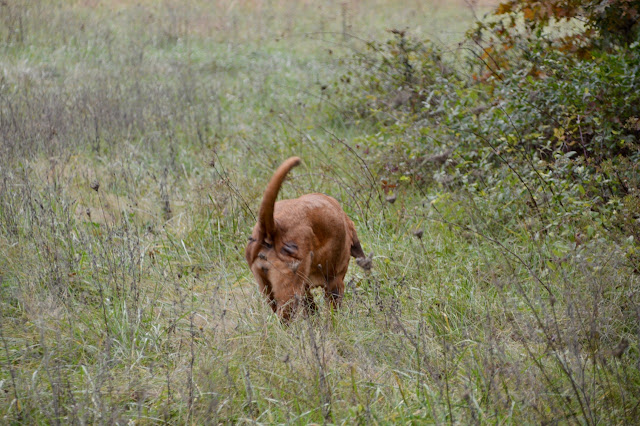 I saw this morning that Dog Food Advisor had the Sportmix Wholesomes food I have been feeding the hounds rated as a 4-star food. (chicken meal & rice) It was the food that cleared up Heidi's skin issues in February 2017 and put weight back on Heidi and Stella. I found it by accident at my local hardware store, who was observant enough to start carrying dog food after the local feed store went out of business due to the owner's death.

What I did find out before using this food was that it was made by the same company that makes Earthborn Holistic Dog Food, in factories only 90 miles away. With low shipping cost a 40# bag is only $31.99 and was one reason I was skeptical of the quality. Another reason of skepticism was it did not list Chicken but Chicken Meal as its first ingredient. I had spent top dollar on the Grain-Free foods for years or the higher priced foods with chicken and rice included. I never could clear up Heidi's skin allergies until I tried this food. Plus Stella had lost close to 20 pounds that same year. 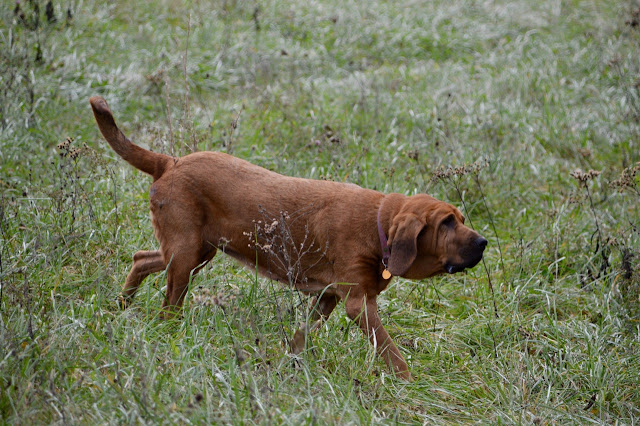 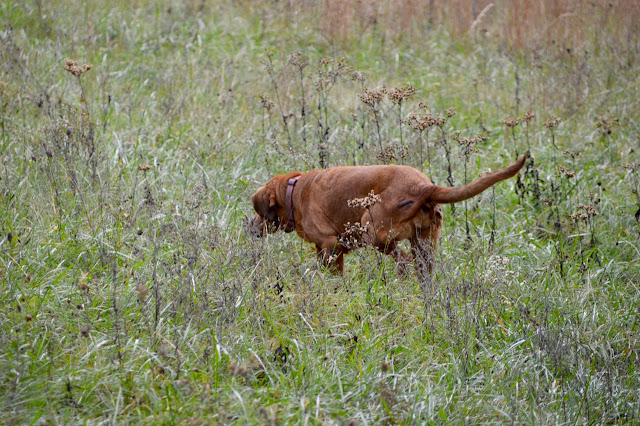 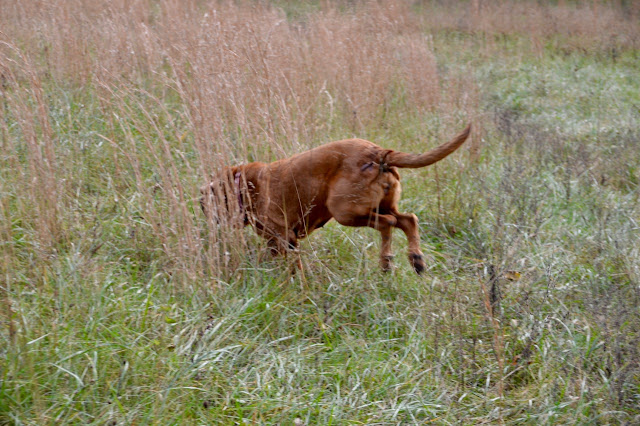 It was good to see all of the activity Stella was doing this morning. I take it as a sign that the yelping in pain Saturday night was just for something that happened short term like a twist or tweak of her back, maybe her hips. I still keep an eye out for anything out of the ordinary for Heidi and Stella. 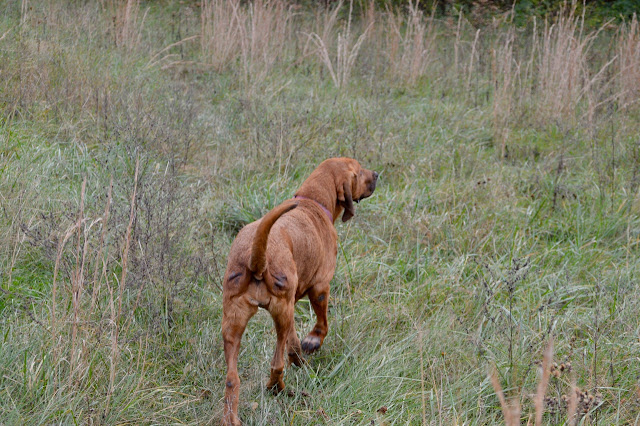 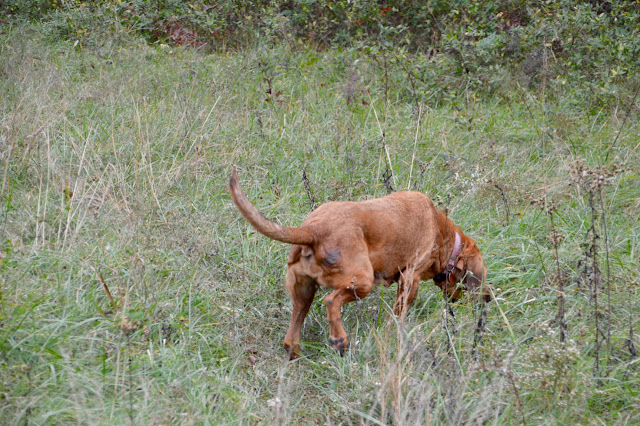 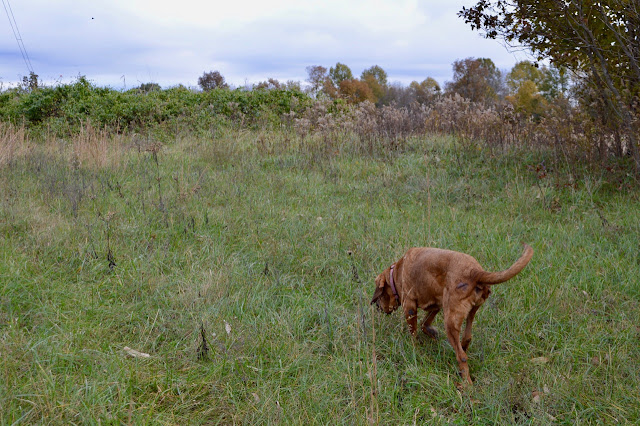 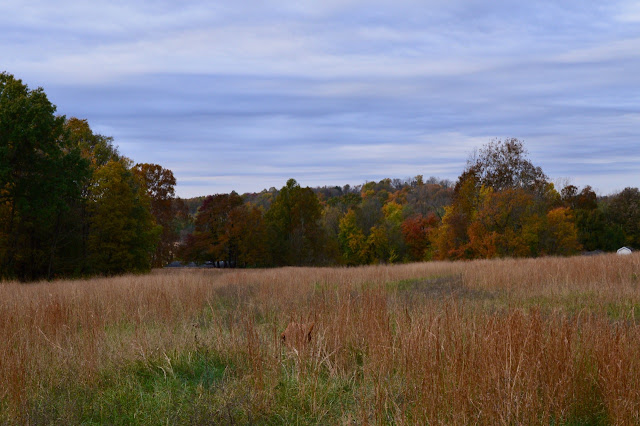 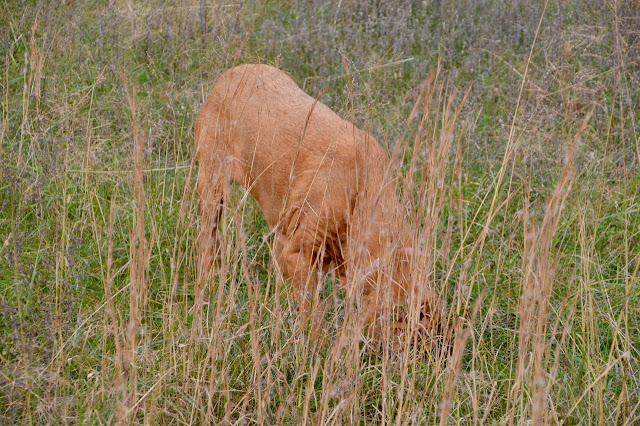 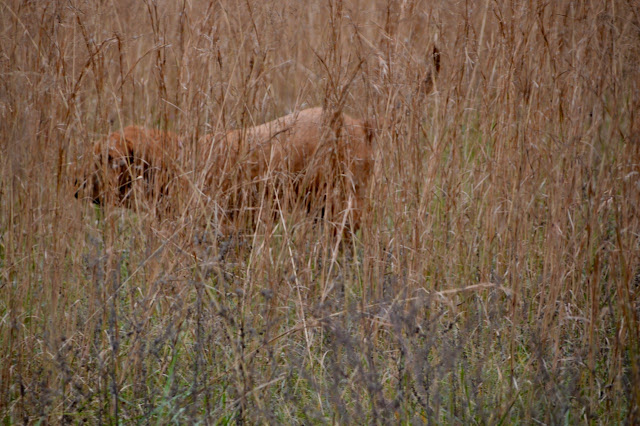 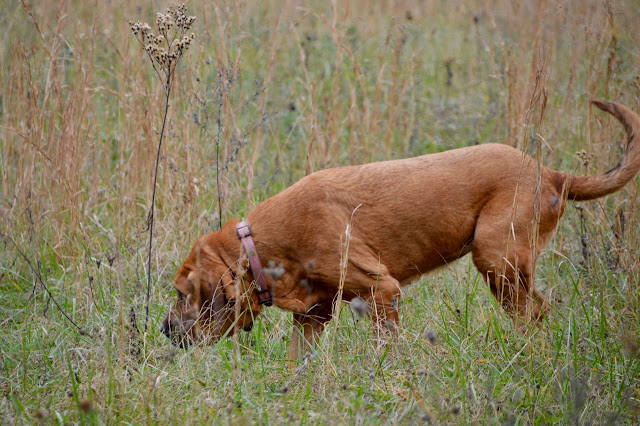 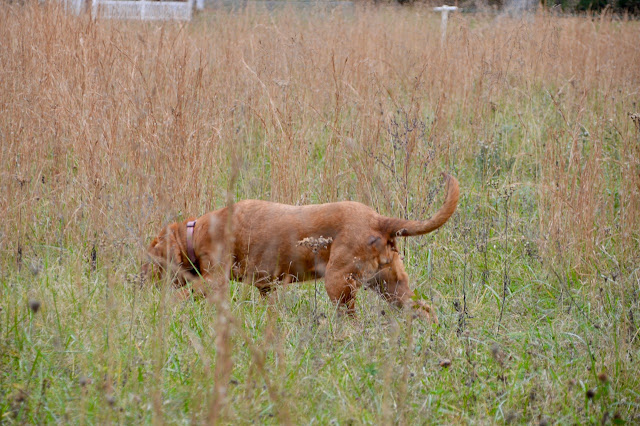 In 2008 I had two other Sycamore trees just as tall as this one ... only one large trunk for each tree and located down along the side of the driveway bank. In June 2008 I had straight line winds from the southwest but some way turned due north right at the bank. It pulled two of those 100'+ Sycamore trees out of the ground like weeds and laid them across my front yard parallel to the house.

That is one reason you saw my tv satellite dish mounted to the side of the house in a photo of Heidi the other day. The winds demolished the Directv dish they had mounted on a pole in the front yard. The tree is due south of the house. I have a quote to trim the trees but the only problem is some of those tree trunks are on my neighbor's property. Actually the property line between our yards is a right away from an old railroad company that had tracks at the bottom of that driveway bank. 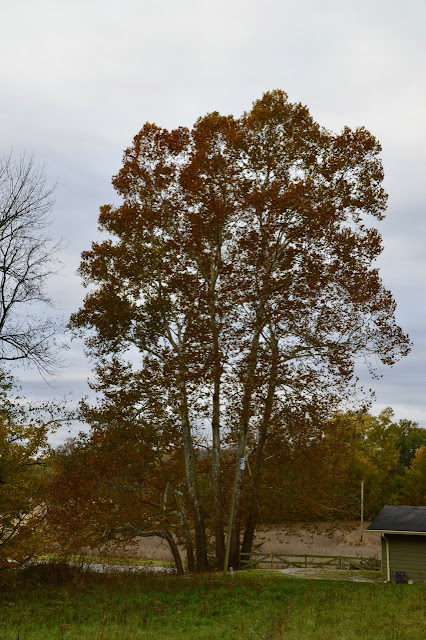 Stella tried to test me toward the end of the walk this morning by gradually walking out to the center of the field. That is okay because she likes to end her walks by walking past the pole on the north side of the yard. When I was watching her today, she was going to the center of the field but also was gradually turning to head to the neighbors yard or the woods behind their house. She turned back toward the house when I yelled 'No' ... just a little test I guess to see if I was paying attention. 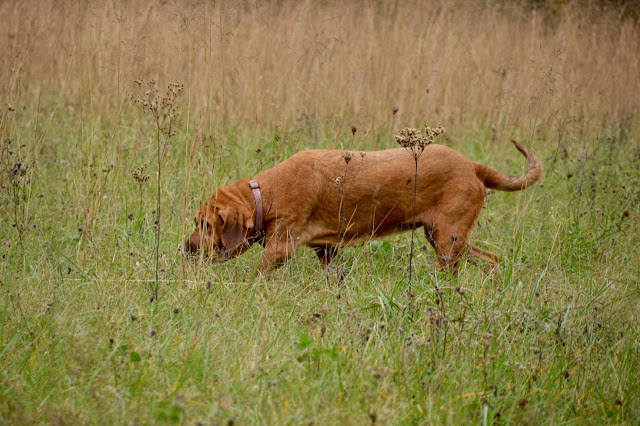 These photos of Heidi show a sad basset hound as we return from the walk. They couldn't be farther from the truth. She was wagging her tail nonstop and then started barking as we got closer. She was happy to see us, and happier to get back inside. 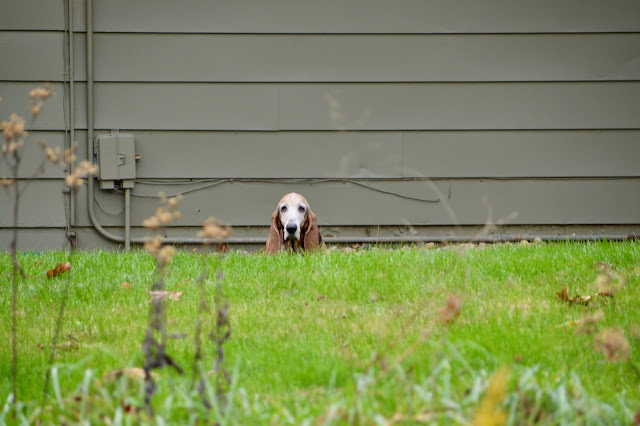 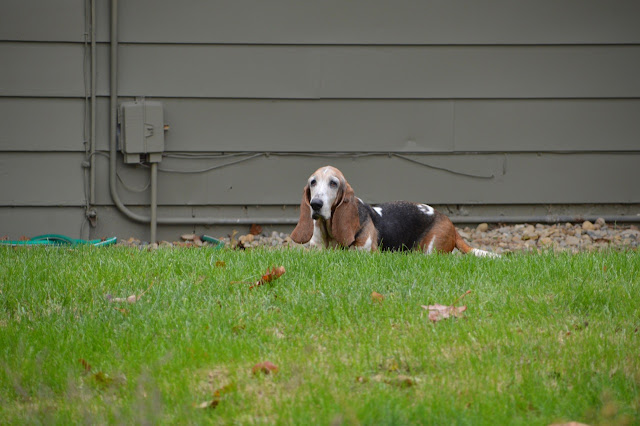 For a few seconds it looked like Heidi and Stella were going to play with one another in the yard but they only tapped noses. Stella was just starting her run toward Heidi. 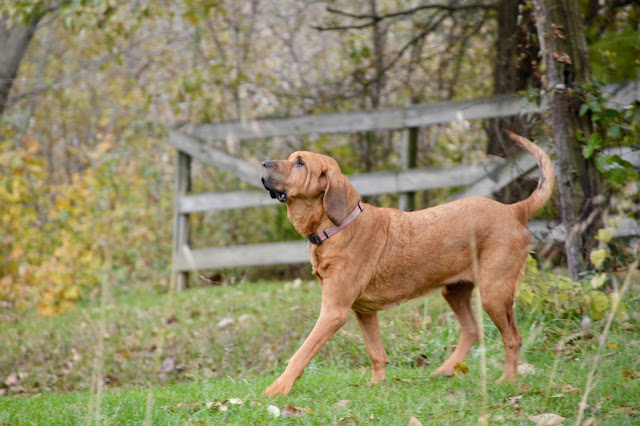 Right after that nose tap Heidi turned and sprinted to the door. 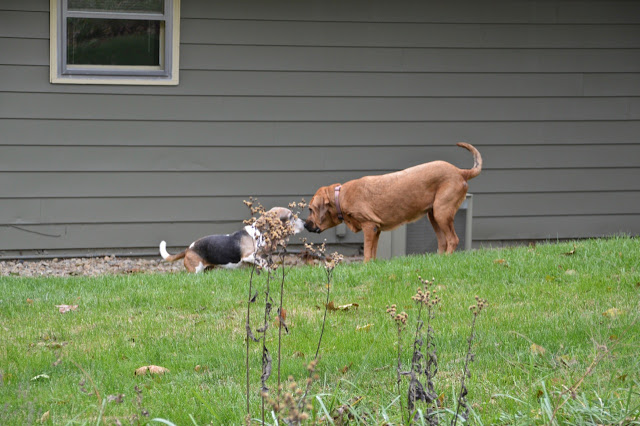 It's really hard to believe it will be November this Thursday in 'the tropics' of Southern Indiana.
at October 30, 2018