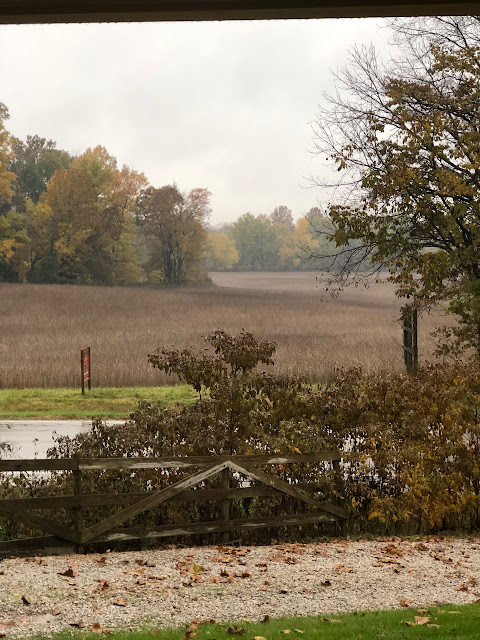 We woke up to the sound of hard rain this morning. By the way things looked it had been raining all night. Checking the weather app on my phone and then Wunderground I was seeing 100% chance of rain every hour until tomorrow around noon. Stella doesn't like the rain so it should be an interesting 24 hours to get her out in the yard or field to relieve herself. She will eventually go but on her terms. 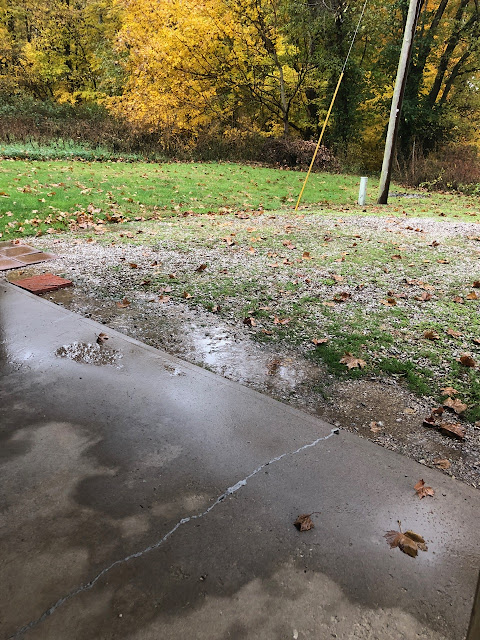 As I lifted the Nikon D3200 to my eye to take that first photograph I found out the battery needed charging for it to work. I didn't want to miss all of the early morning excitement, already past 10am, so I grabbed the iPhone. As you can see or will see, I did not finished my carport concrete floor project this fall. The cracks were sealed but not sanded. I also didn't get the new concrete put down to fill in the chipped out low spots. Once that is finished next spring I plant to coat the entire floor with some textured gray paint. 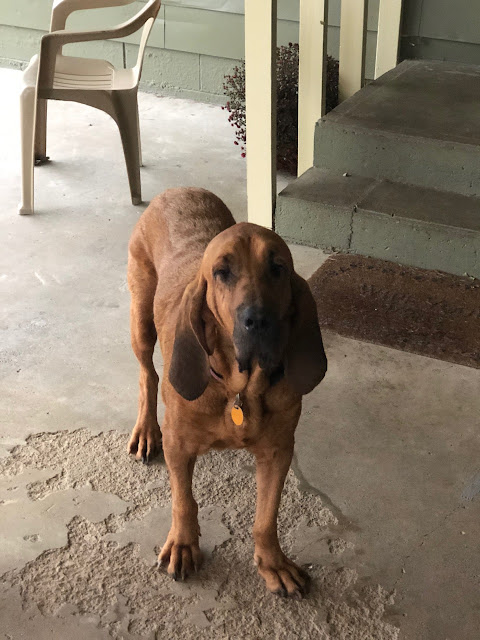 When Stella came back inside early this morning for breakfast ... Heidi's back was wet, even while she was under the roof overhang to pee. Stella's was not ... dry as a bone. A few hours later she wasn't going out in the yard no matter what. That is her "I'm not moving look." 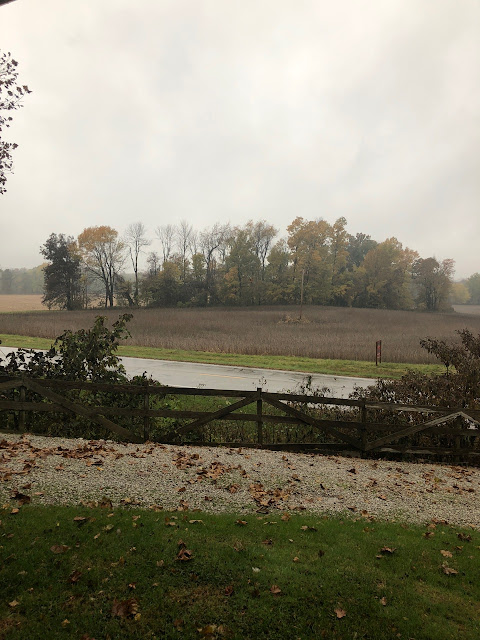 I tried looking in a different direction and still saw rain as far as I could see. That is looking Southwest, where most of our storms and winds come from. With a day like today I have declared it 'laundry day' and I might put a page together for Sadie that I will insert at the top of the blog. 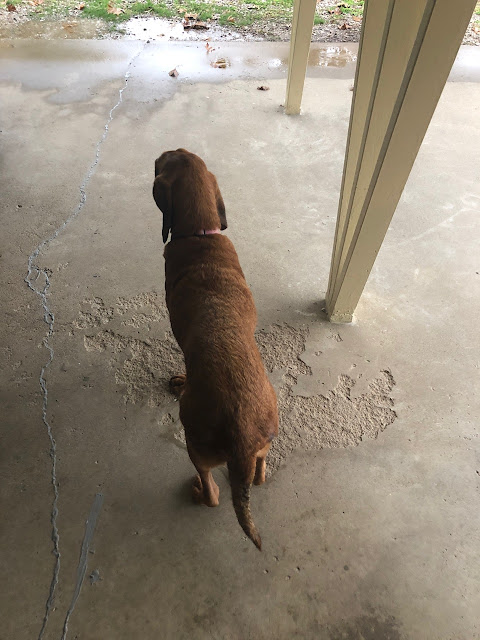 As you see, Stella wasn't moving until I opened the door to go back inside. Anytime I hear the rain stop I will take her outside and coax her into the yard. By noon I may have to bribe her with food to get her to do that. 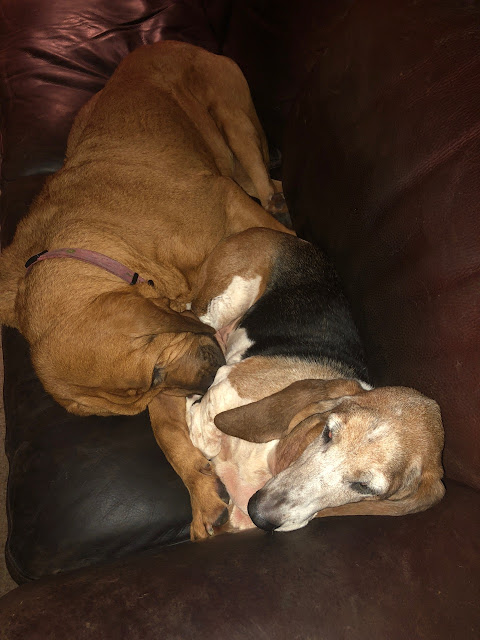 Last night while Heidi had moved off the couch to do a full body shake, Stella in her sleep stretched out her right leg to the end blocking the space that Heidi occupied. That didn't matter to Heidi as she laid her nose on the couch surveying a possible spot to jump in. She quietly climbed up on the couch in that small space in front of Stella's leg ... stepped over it ... then did a slow left hand curl and plopped down in that corner.

Stella only moved her head and decided that Heidi might be a good pillow. The didn't move for the next two hours. In the meantime I barely had a seat left on the short couch, which is somewhere between a love seat and a long couch in length. I decided to move my book reading to the big leather chair that Sadie use to occupy on a nightly basis. 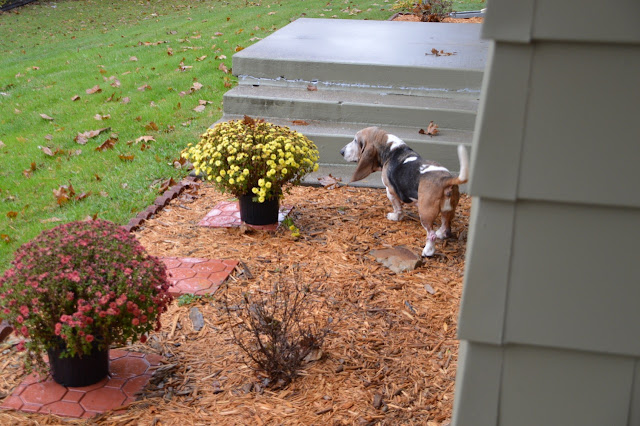 With lunch kibble just served and eaten in less than a minute by each hound, the rain had let up but was still raining lightly with huge drops of rain. Heidi planned her path to the front yard for a quick dumping of tanks. She was not out there much longer than that and then did her daily lap around the house. 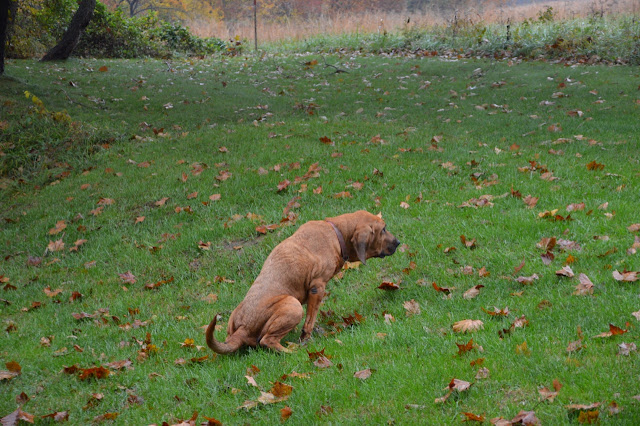 By the time I looked in back Stella was in the position I wanted to see. It had been almost 15 hours since she peed last. As soon as she finished he took about three steps toward the field but decided it was raining to hard and came back inside. 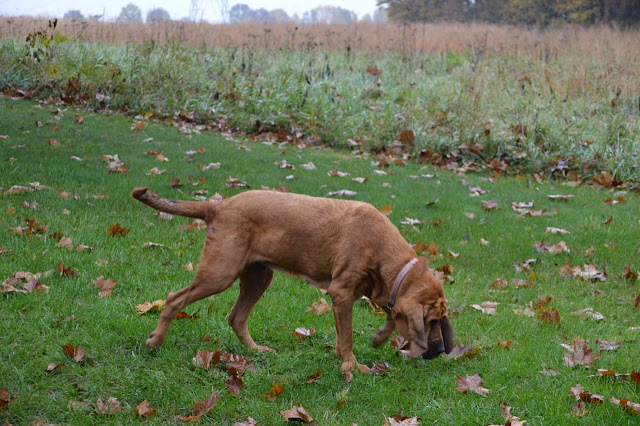 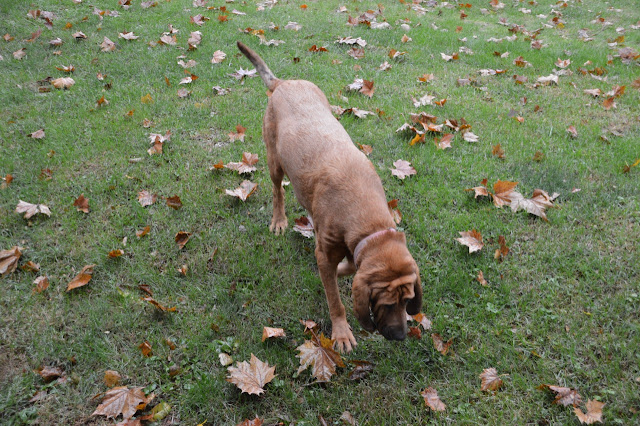 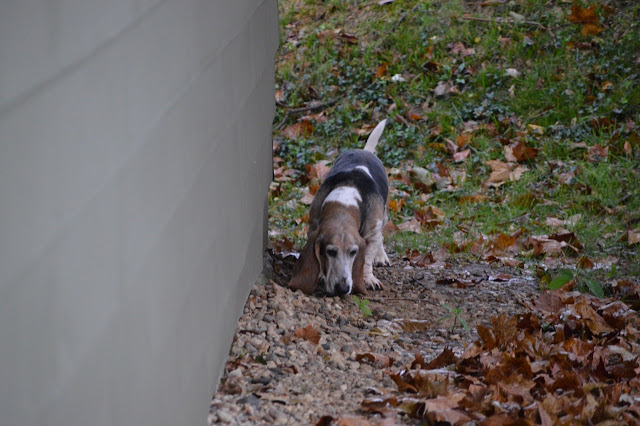 Heidi has never minded the rain and snow as long as she can stay dry under the roof overhang, which has always looked wider to me than one on a newer house. 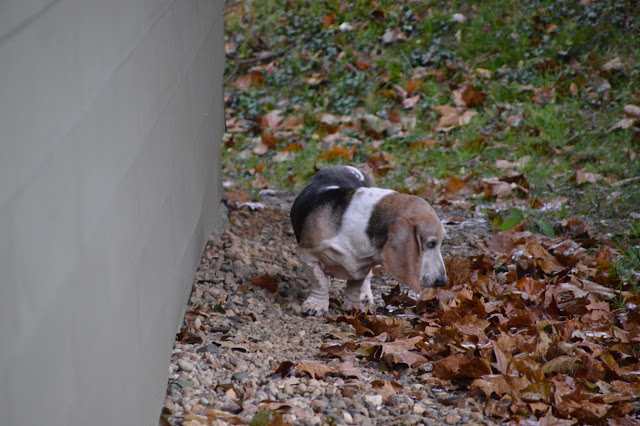 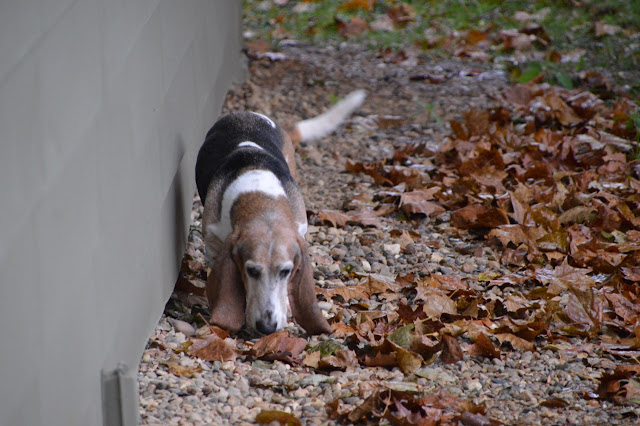 For those of you that read the blog on a computer instead of a smart phone, on the left sidebar below the archives I have added around 160 labels (subjects). I know when I look at the blog on my iPhone I don't see the sidebars, so no blog list and no archives are seen.

I was going to wait to post this but the fact is with today's weather the afternoon will not turn out blog worthy and not much to photograph. The laundry is started and I am into my second book of three that I picked up at the library. Nothing like a John Grisham novel for a change of pace.

It's overcast, dark, gloomy and non-stop rain here in 'the tropics' of Southern Indiana.
at October 31, 2018