A Little Excitement On Thursday 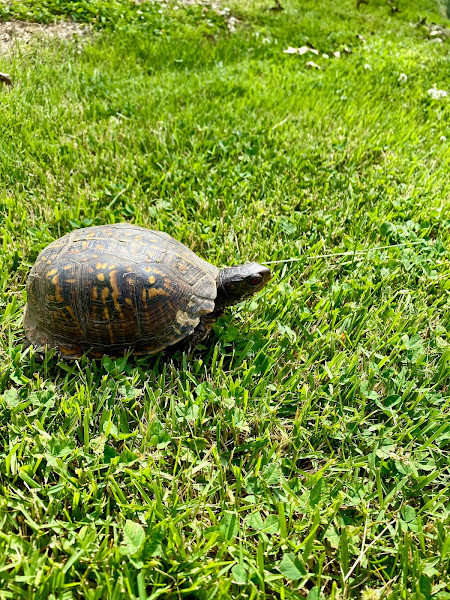 Since I posted last Wednesday, it has been an interesting four days and Sunday isn't over yet. I will say the hounds and the dog continue to get better in the yard when they see neighbors outside. Henry is always on his long cord that stretches to the property line in different directions. Stella hangs out in the yard free of any leash UNLESS I walk inside to do something quick and by that time she is in the backyard two houses over. Walter hangs out with me in front or back and doesn't bolt if he sees someone out front. He WILL go to the neighbors yard if he sees them, only to get petted one time and then comes trotting back home so proud. 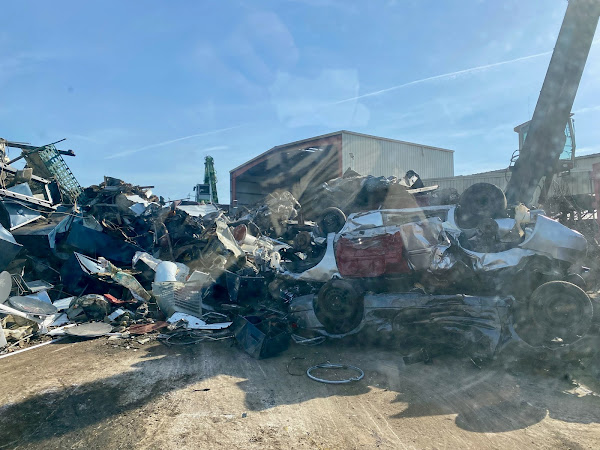 I had a plan for Thursday morning after figuring out the reason I could not start the new 1960 VW truck. I wanted to get the sheets of aluminum out of the yard, hidden by the seller on side of the built-in shed. Some sheets were over 7' long and only an old truck like I have would handle something that long. Oh, why wouldn't the truck start the day after I got it ... I never had a vw ignition switch where I had to push in two different times to turn the key to start it. I found out by accident, to push it in a second time.
So with the aluminum sheets loaded and tied down in back of the 1960 VW single cab by 8am we headed for Fligeltaub Recycling to turn in the sheets of aluminum and an old rusted out fire pit that had been tossed in the weeds in back. I made a whopping $6 for that plus a lot of "thumbs up" and shouts as I drove through the recycling yard with some stacks of metal taller than a two story building. 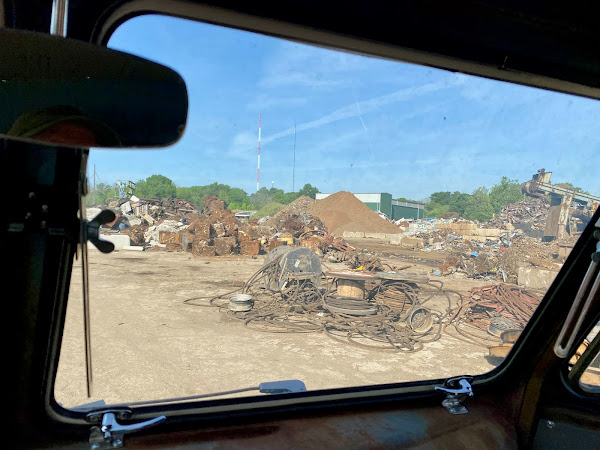 The single cab was running perfect, quiet at the intersections with stock muffler and exhaust and enough power to keep up with traffic. I decided to go out of my way to go to Rural King for a needed bag of dog food and that is when things got interesting.
The heater was turned on and I will say with all new parts that make up the vw heater system, I will never be cold this winter. I turned the knob that controls the heat on all old vw's, bus and beetle to the off position. It sure did seem like the heat was still blasting. Sooooo while cruising down the street I pushed this lever all the way in.
TERRIBLE DECISION !!!! 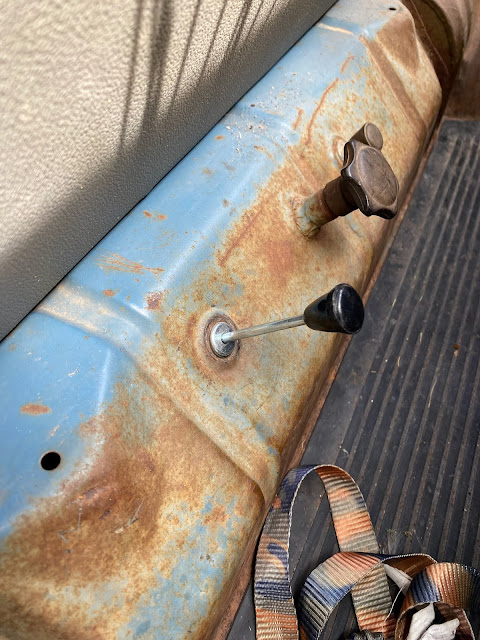 With the unique paint patina combined with a vehicle few have seen let alone know it was made that way, the 1960 VW single cab raises a lot of curiosity in parking lots. As it did in the Rural King parking lot that was full of Fords and Chevy trucks, clean and dirty, and early in the morning. As I turned out of the parking lot it is still running smooth and quiet and I have been quite pleased for the 17 miles I had driven.
THEN ... all of the sudden ... it is dying like its out of fuel. That can't be because the seller told me before shipment it had about a half tank of gas or with the larger tank, equaled 7 gallons or so. I was able to pull off onto a wide shoulder of the 4-lane highway I had just turned right on. I tried to start it numerous times but it would never quite turn over although all the lights and signs told me it was not a starter or solenoid, nothing electrical. 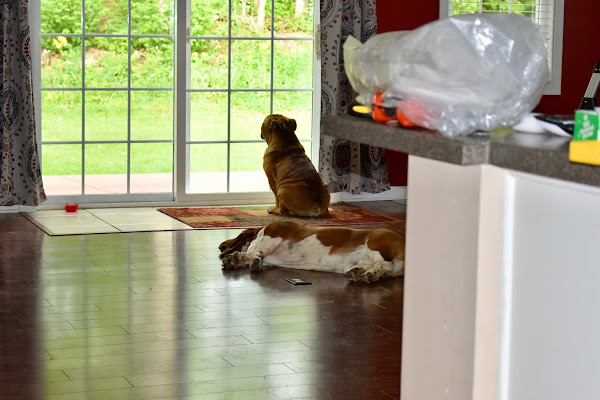 From our arrival April 29th, Walter is wondering what in the hell is going on ??? Where did his concrete block wall go ???
The second man to pull up in his truck was a VW owner, showing me his Baja Bug on his phone. Neither of us could figure out what was wrong. It wasn't flooded, no fuel smells or leaks, bright lights and it cranks but wouldn't turn over. He and his friend pushed me so I could pop the clutch in second gear to start it but that didn't work either. He decided he would tow me off the highway about a mile away to a parking lot of a veterinarian office.
Somewhere along this process he decided he knew about where I lived and google maps would tell him exactly where I lived so he towed me home about six miles away ... up and down hills on a narrow popular road, with sharp 15 and 20 mph curves ... with 3' between me and the back of his truck, the common yellow tow strap attached to both of our vehicles worked to perfection. Luckily I knew about towing old VWs and braking my vehicle to keep the tow strap tight.
We made it home with no issues, not counting the 6-7 cars stuck behind us because they had nowhere to pass us and we didn't have a place we could pull over even a little bit.
He parked it right in front of the house and unhooked his equipment while I ran into the house to get some money for his troubles. He saved me ... but I found out Friday morning what an idiot I was. 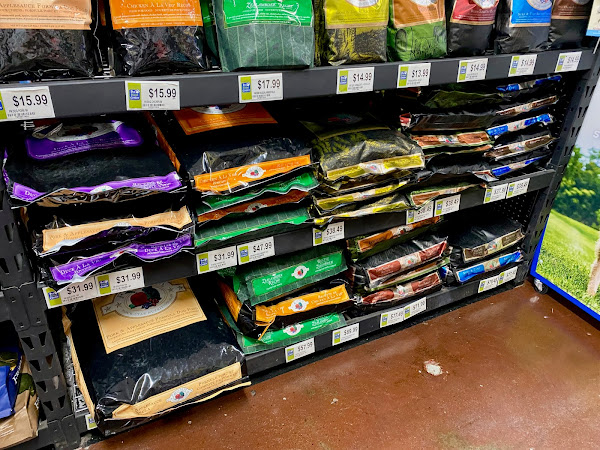 Friday we had big plans around noon. No ... not the VW truck ... the hounds and the dog. By popular demand they were headed for Southwestern Indiana Land Title, Inc. The owner and the ladies that helped with my house closing are all dog lovers and said they had to see Walter, Henry and Stella. I asked to make sure because you are talking three dogs at one time in a very nice office building. So we piled into the Mini Cooper and headed to town. All three were in the back with Walter panting like a mad man wearing his harness, Stella laying down sleeping and Henry sitting staring out the window.
To say they were popular with the crew at Southwester Indiana Land Title would be an understatement. They did not mind Henry jumping up on them for all the attention. They did not mind Walter snorting for air and they loved Stella. It was a nice Friday visit and the hounds and the dog slept the rest of the afternoon when we returned home. Thanks Angie for the new pack of Pork Chomps.
After getting the single cab started on Friday morning, I decided I'd pull it into the garage for a day of rest but Saturday morning I had it back out for some local traveling. First was to fill the gas tank with gas so at least I knew I had 15 gallons of fuel. (gas gauge does not work) Then I wanted to check out a pet food store I had heard about. It was near the house (within 3 miles) and just a few blocks away from my new found cafe The Cross-Eyed Cricket.
Since having basset hounds since 1987 I have been to a lot of different stores for dog food. From hardware stores, country feed stores, the brand name stores and even having it delivered UPS or FedEx ... Pet Food Center is the best I have ever seen. EVERY brand name food and inventory packed to the gills from food to toys, beds, fish, rabbits, snakes, lizards ... you name it they got it. So I have found my new source for dog food. 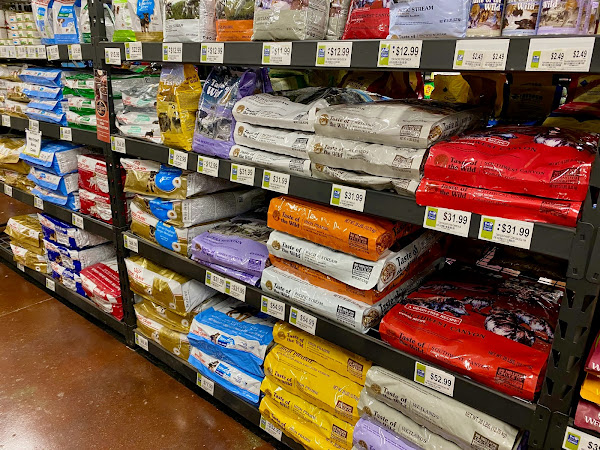 Oh, what did I do with the truck that made me an idiot ???? When I pushed in that long newer lever with the black knob, I did not know I was shutting off the reserve gas supply. No wonder ran like it was out of gas.  LOL
I found that out Friday morning on my own. I laid down a Mexican blanket to kneel on, opened the engine door in back and adjusted the points just to make sure. Tried turning it over and it sounded the same. I remember the sales ad said the small fuel filter was not in the engine compartment like most of the vw owners do but up under the truck away from anything that could cause a spark. It was hidden out of the way up in the frame. Next to that was a shiny small silver something ... that had a small lever where I could pull it back and forth .. attached to a shiny new cable that went forward.
When I saw that cable my brain cells instantly clicked into formation and I remembered I had pushed that long lever in while driving. THAT was the only thing different that had happened in the 17 mile drive. I pulled that lever back out, inserted my key and pumped the gas pedal to feed some fuel to the engine. After the forth time it coughed and sputtered but the engine started and I was back in business for my Saturday morning traveling to the dog food store in the 1960 VW Single Cab. 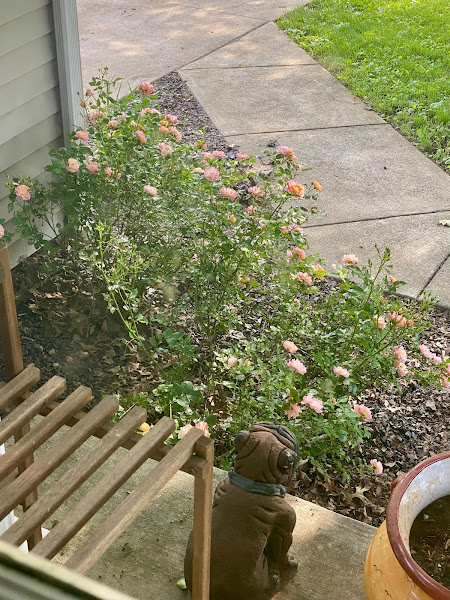 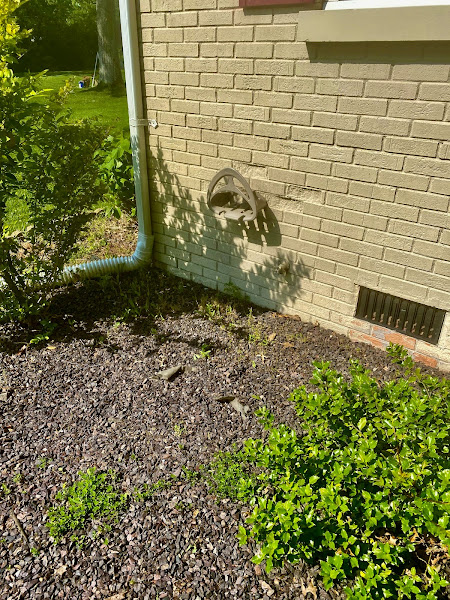 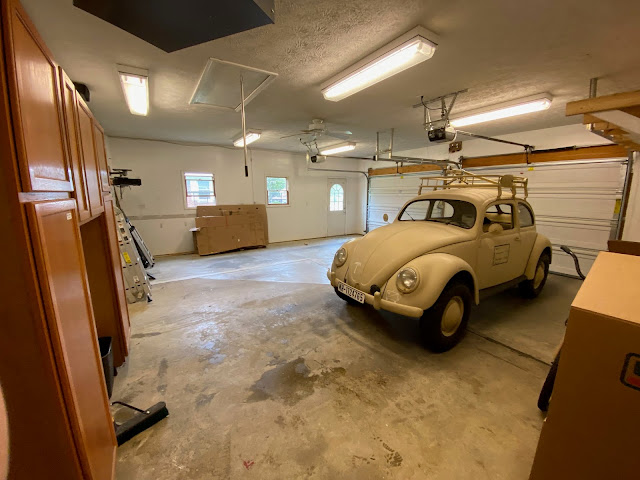 Sunday was another relaxing day with nothing planned. I pulled the 1957 VW 82 E out of the garage (old photo) to go scout some future bike riding roads heading west out into the country. This place is going to get me in shape fast because of the kind of hills it has, steep and short mostly but long enough where you ask yourself why did you ever get involved with bicycling.  (joke).
I also thought about washing windows Monday morning while it's cool outside and was not sure how many or where my water faucets were located outside. I was happy to see one on the front of the house 60' from the middle of the driveway ... so not only can I clean my windows but high pressure wash my driveway this week. 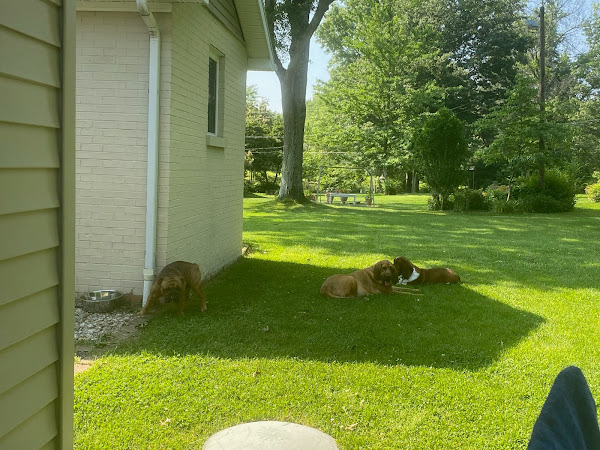 As you can see by their activity ... high temps and 'thick' humidity have arrived. I am still living with ceiling fans inside and have not turned on the ac yet to use. I did turn it on when I arrived on my walk-thru to see if it worked before signing papers at the title company.
It was not until I downloaded my photos where I saw that something must have been on the lens (3) on may iPhone because they were not sharp and clear, the color was also off. Even my editing did not help the photos that much. 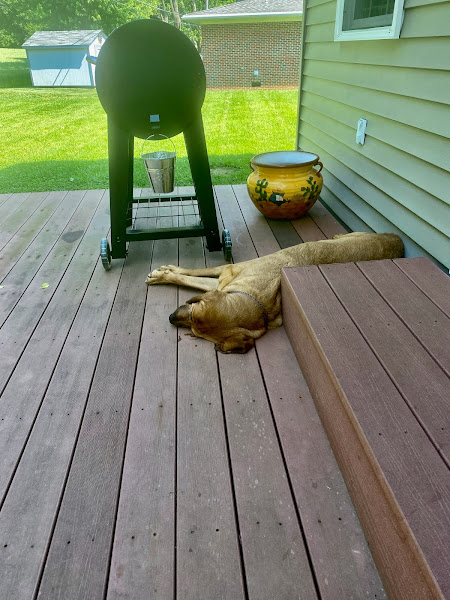 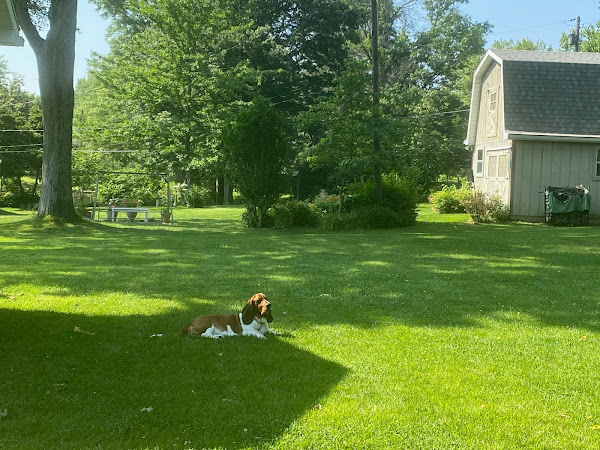 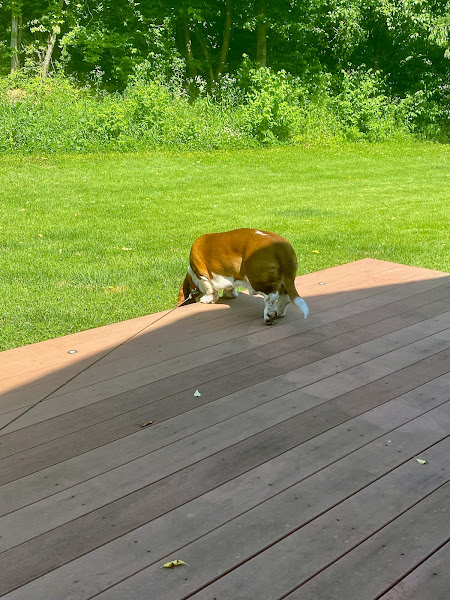 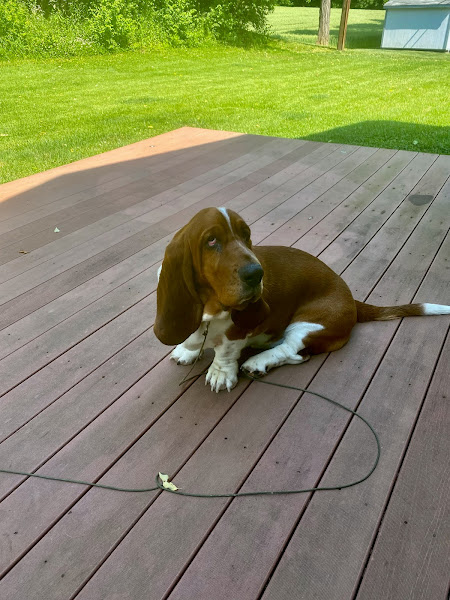 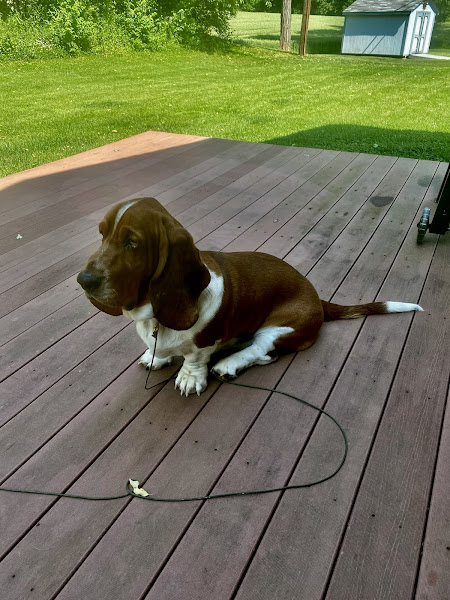 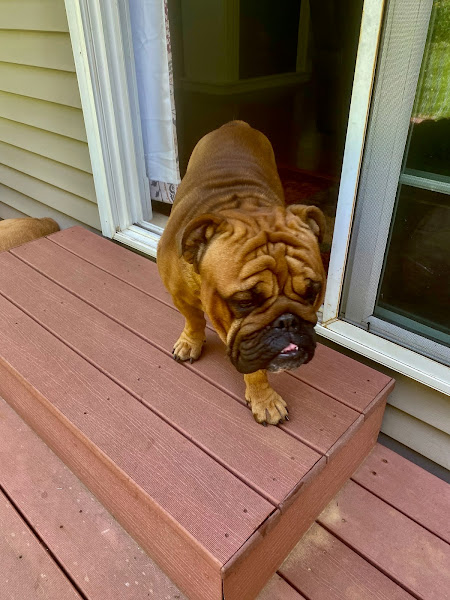 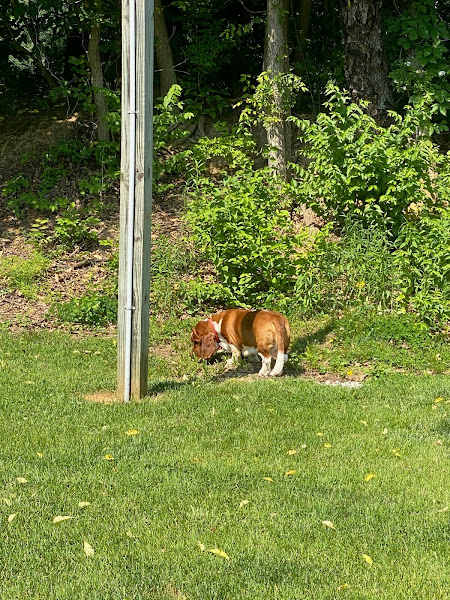 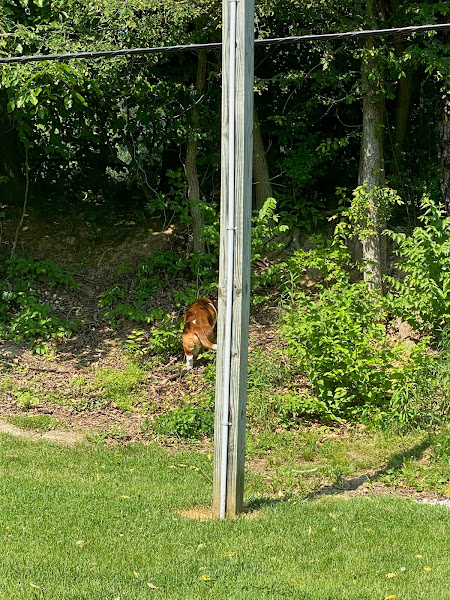 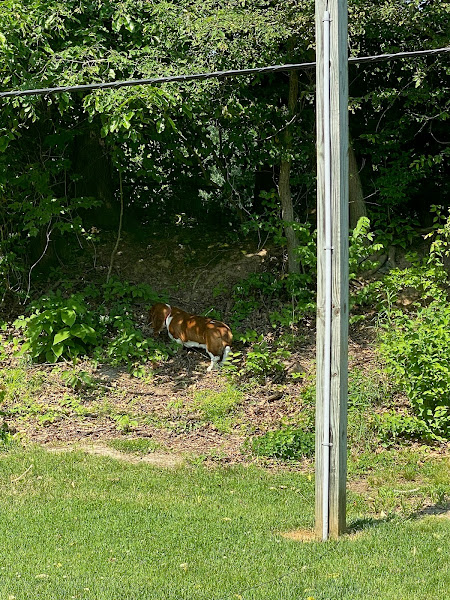 A few hours were spent watching the Indy500 qualifications where only the last 3 positions were determined since all qualified on Saturday. Then the nine fastest cars on Saturday did another qualification trial today to compete for the pole and the other eight position. I am old enough to remember when they broke the 200mph barrier but not the year or even a period of time. Now 232mph lap average takes the pole.
With a self-haircut with clippers, a shave and nothing else planned today ... it's been a successful few days.
Summer has arrived a month early here in 'the tropics' of southern Indiana.
at May 23, 2021
Email ThisBlogThis!Share to TwitterShare to FacebookShare to Pinterest
Labels: 1957 VW 82 E, 1960 VW Single Cab, Humidity, Indy500 Qualifications, Turtle