Where Did Summer Go? 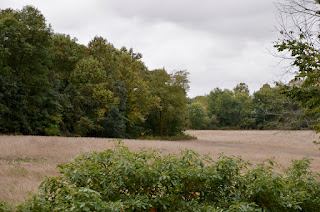 Wasn't it just weeks ago that the first picture of the blog was always of sunshine and hot temperatures? Maybe it's the overcast skies or the cooler temps ... but summer feels like it happened long ago.

I am not a fan of winter ... I love hot weather. I could see from the clouds today it was going to be about the same as late afternoon yesterday. Which is okay I guess but I prefer sunshine. 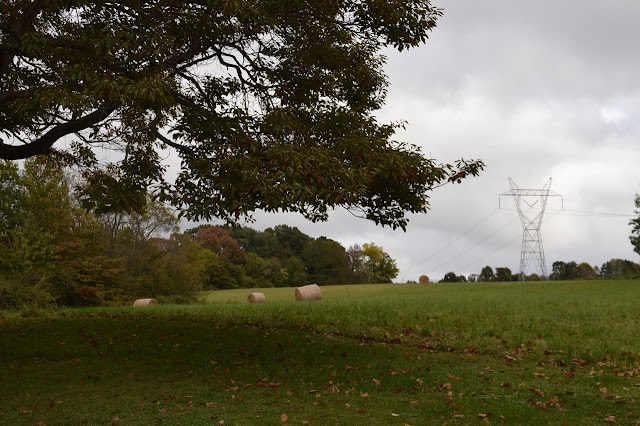 I thought I might catch this farmer a couple of fields away across the highway but by the time I picked up the camera and ran into the front yard to get an angle to see him, he was already to the edge of the field.

It looked like a large mower where he was mowing his corn stalks to ground level. I could tell there were some difference in the height of the corn stalks based on the path he had created. It started raining about the time I took the photo above and he disappeared to side of the field to his left which is blocked by the row of trees. I never could tell if he was mowing or cutting the stalks to ground level and that became more confusing when I saw both sides of his machine in the upright position so he could travel down the highway.

What ever he was towing did not look like mower blades when he lifted each side to the upright position for traveling down the highway. Before I could really tell what they were, he was out of sight. 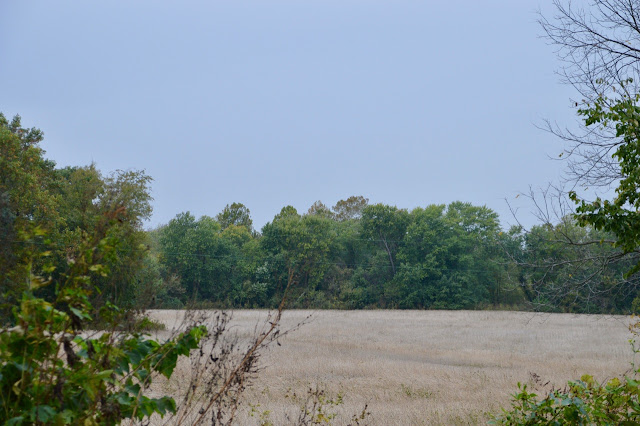 With cooler temps today it really didn't matter when we took the walks. Before the hounds went anywhere they had to check out the 'new area' where I had mowed yesterday. I'm sure there are a lot of new scents for them to check out. It's nice not having to pull out 5-6 burrs from each hound now that the ragweed has been cut. 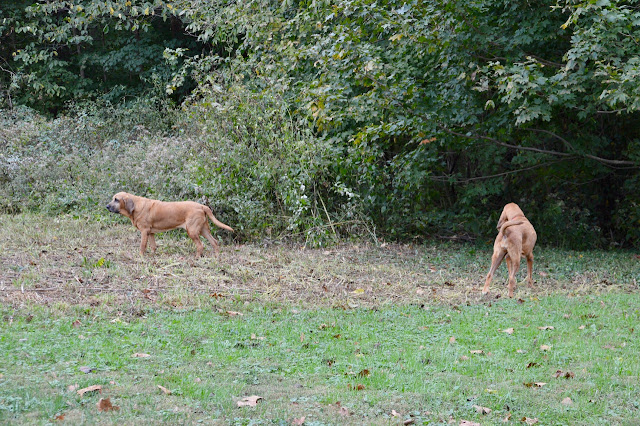 Stella thought that Sadie may have started the walk without her this morning and without me ... but when I yelled 'coffee' Sadie came running to the house. That word 'coffee' seems to work first thing in the morning to get both hounds to come back to the house so I can have MY coffee ... it's not for them. 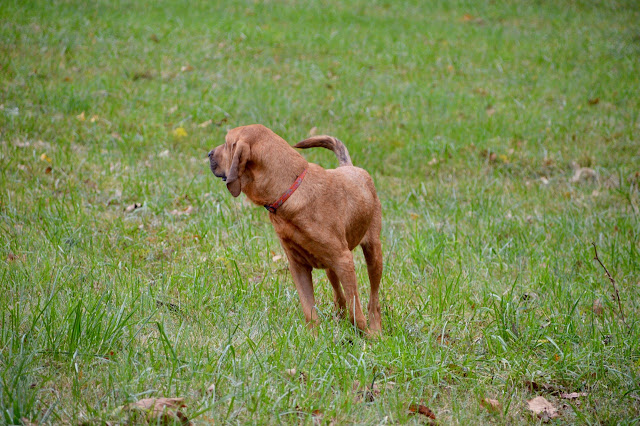 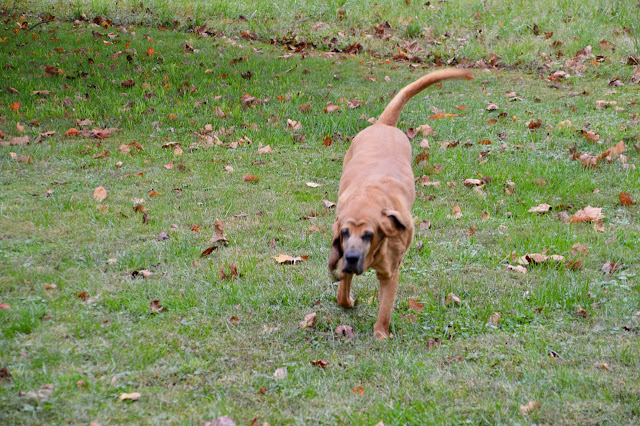 By the time we started the walk today the sun was barely out, no wind and the temps were a bit nippy. Like I have said before, for whatever the reason, I don't believe we are going to see the bright vibrant colors when the leaves change color this year. So far those bright colors have not shown up before the leaves have died. 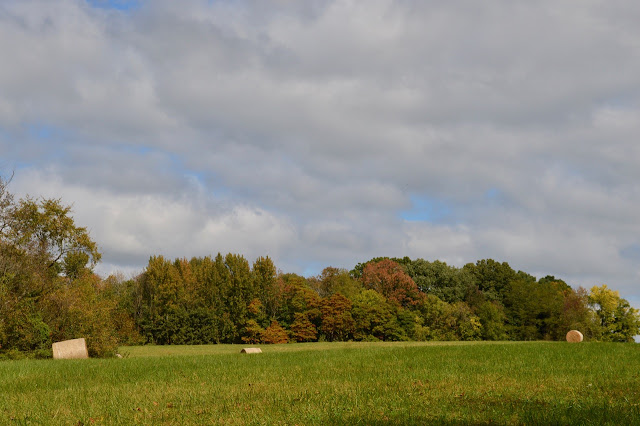 By the first turn I thought Stella might decide to walk with us today but once again she found that one spot she likes and stayed behind. Sadie moved out toward the middle of the field for a short time but sprinted back to the area where the deer hang out. 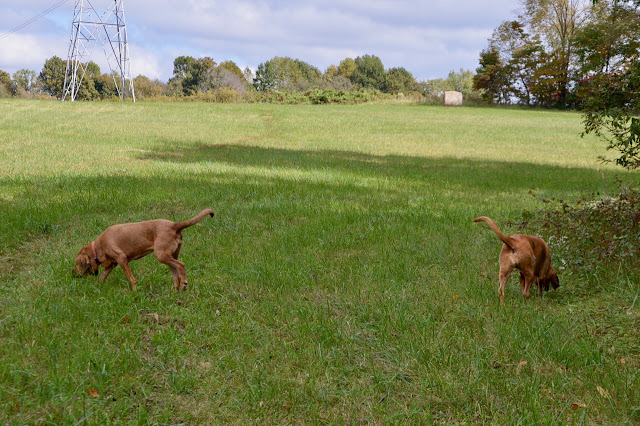 As long as their noses get a workout I know they are enjoying their walk. 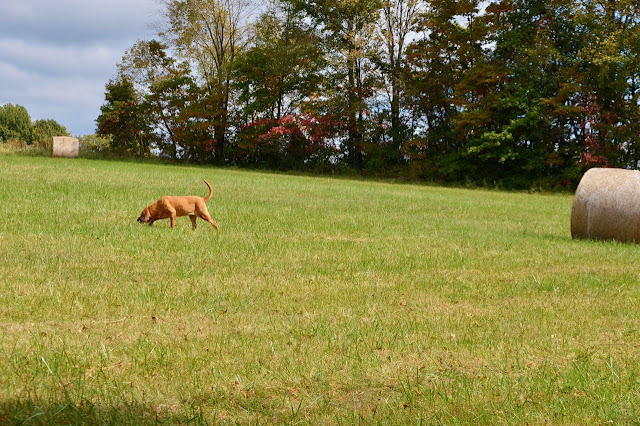 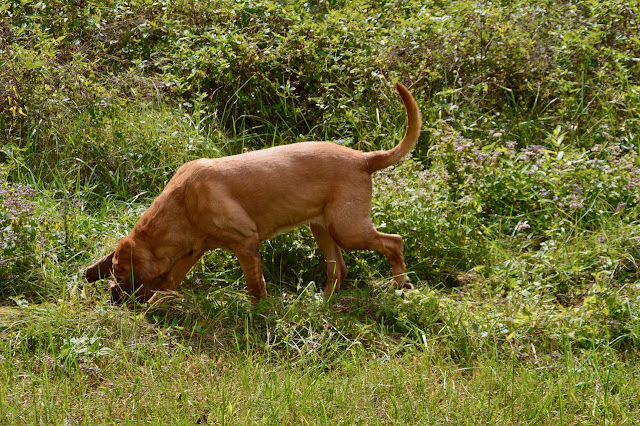 While we continued to walk, Stella never moved from that spot. It came to the point I actually thought she might not move until Sadie and I had walked all the way up to her. 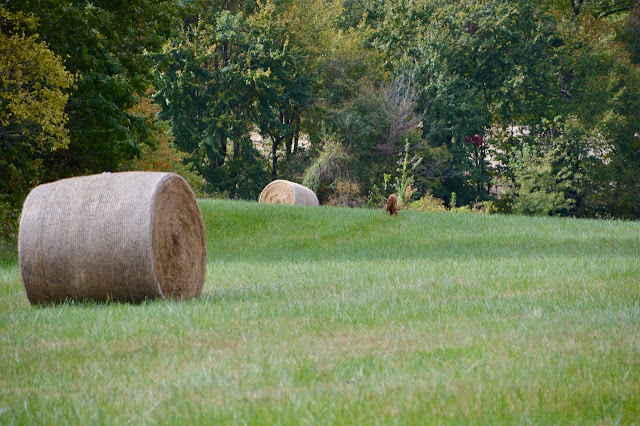 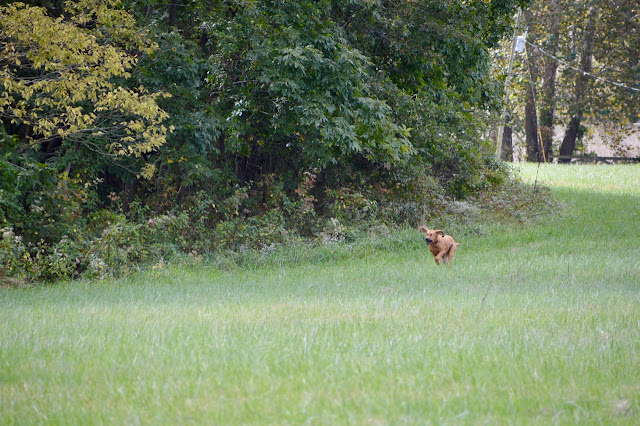 Her nose made a change and she started to move in our direction. Once she saw us, she stopped running and slowly walked toward us, almost with a look of disappointment. 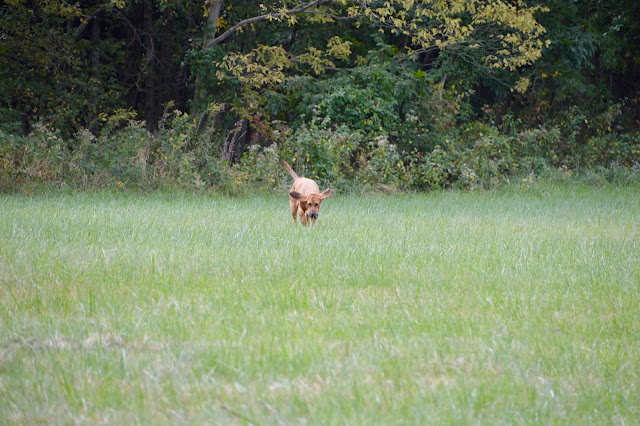 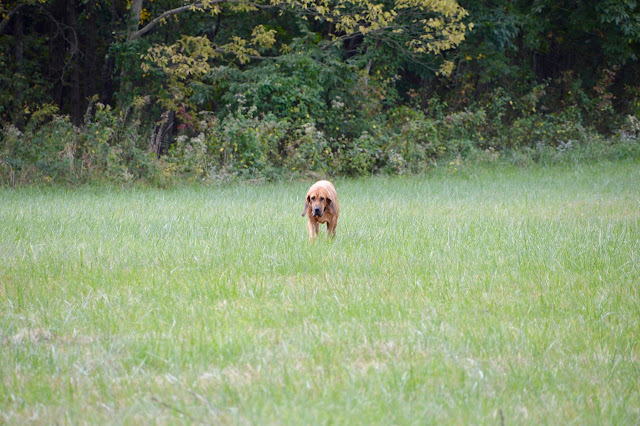 Of coarse Sadie had to make nose to nose contact to make sure it was Stella. 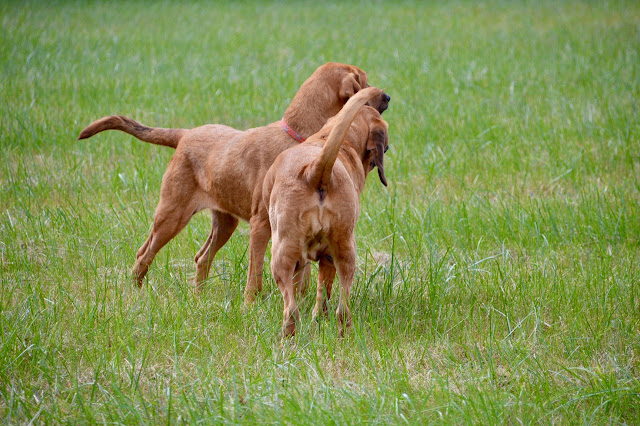 I have continued to look at different internet options and I have called again today with the local company that installed my Exede Satellite Dish in 2014. Even moving to DishNet and keeping that 15Gb per month at the speed I have now, it's the identical cost.

I called the local company I had before Exede to see if anything had happened in the past two years, possibly having wireless internet in my area. They offer a much lower monthly fee and UNLIMITED data .... but ... the trees I have on the north side of the house block would block the signal from their tower a mile or so away.

DishNetwork tells me they can give me the same TV programming for $35 less per month, guaranteed for 2 years, plus add the Pac12 Network that I would love to have so I could see ALL of the Washington Husky games here in Indiana. I can see them on ABC or ESPN at times but not every game. Once again that is a contract issue (money) between the Pac12 Conference and Directv.

I did have a Directv customer service rep tell me things have changed since AT&T bought Directv and a lot of those things are not as good as Directv had before, so he did not know if they would ever get Pac12 or not.

I noticed something interesting last night as I was downloading photos from my iPhone to the computer. Due to only 5Gb of iCloud storage I do not have that on automatic settings to synchornize with every picture is taken by my iPhone. I found it interesting the difference in picture quality of the two photos I took just minutes apart, with the same lighting.

Can you tell which photo is from my iPhone and which one I took with my Nikon D3200 w/Tamron lens? 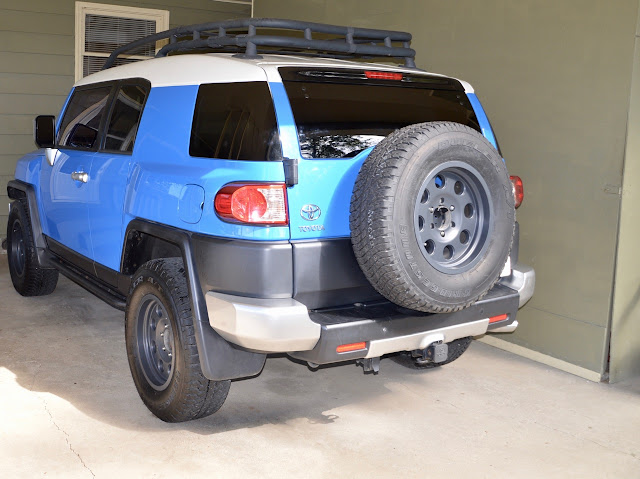 The back seats are still upright in the FJ but the more I thought about it yesterday ... the hounds have to be able to ride even on short trips. I'll just have to plan to vacuum the inside out more often and maybe a weekly swipe to clean the inside of the FJ windows. I do the same inside my house so why not the FJ?

I can confirm that Google Chrome uses less data than Firefox and Safari, for those that work with a data limit to be on the internet. That data also includes what it takes to upload a lot of photos into a blog for any post that you are writing.

As I sit here wearing cargo shorts and a sweatshirt, I am declaring that fall is officially here in 'the tropics' of southern Indiana.
at October 13, 2016