A Missing Glove & The Z4 Is Ready 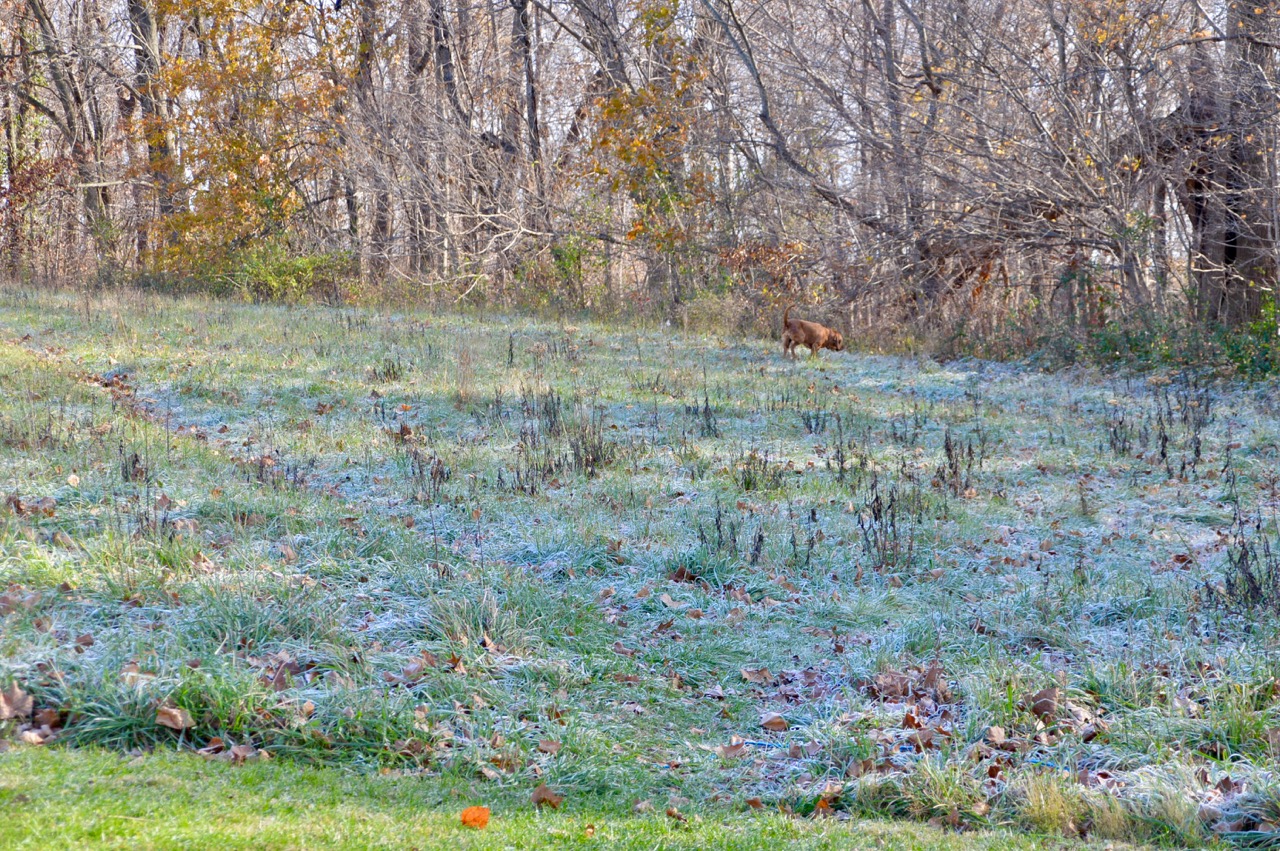 We started the daily morning walk in cold crisp air, somewhere around 35° and cold wind blowing. It wasn't long after starting the walk that I found I was missing my left hand glove. I was pretty sure it was back at the house or in the backyard. I usually don't put them on until after I take the first two pictures from the house and start the Garmin timer for the walk. Stella took off like the last few days, getting way ahead of Sadie and I.

There was nothing out of the ordinary this morning, so I'll talk about something different than the photos show. Both hounds had a lot of energy, did a lot of tracking and toward the end they seemed to understand we were retracing our steps and looking for my missing glove.

I mentioned yesterday that I 'might' put the Z4 up on jack stands in preparation to install the 5 new parts that are due to arrive sometime Monday. UPS usually delivers in the late afternoon so the work most likely will not start until Tuesday. As usual, things change as the job progresses. I didn't panic but I was close to it yesterday when I realized that both bottle jacks I had were not short enough to get under the jack point of the low sitting Z4. 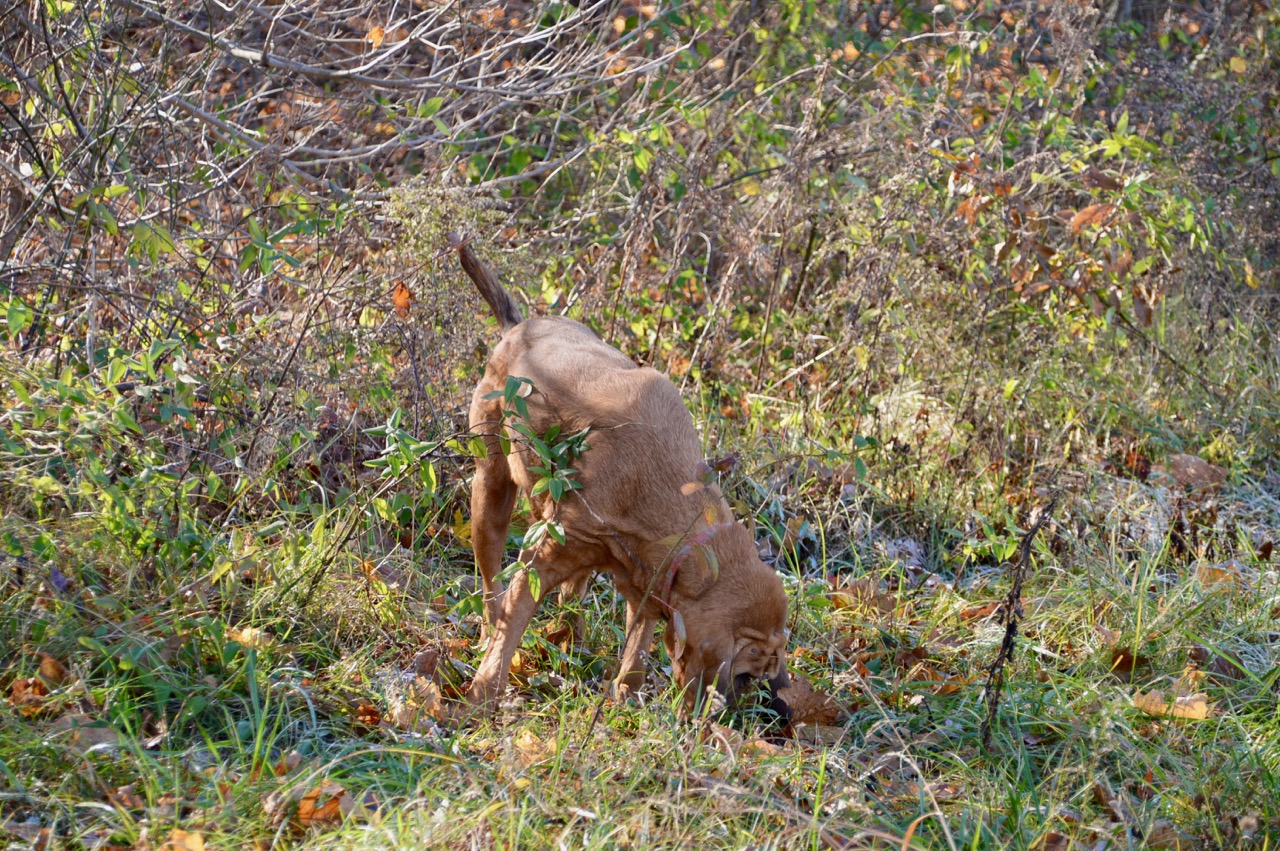 Since the standard option for that car is 'run flat' tires, a jack is not needed nor is a spare tire, consequently the car comes with neither one. I have a small flat tire kit in the trunk just in case because over the years the previous and only owner of the car changed from 'run flat' tires to regular steel belted radials. You might remember that last winter, maybe spring, I jacked up the rear of the car to get some work done on the right side rear wheel.

I used the jack from the Mini Cooper Countryman at the time. It was a scissor jack and sat low enough to the ground where I was able to slide it under the Z4 jack point. The jack in the FJ, which I was planning to use, was a bottle jack and taller than the one I had on the shelf. Was I going to have to buy a floor jack for $150 or more just for this one job? 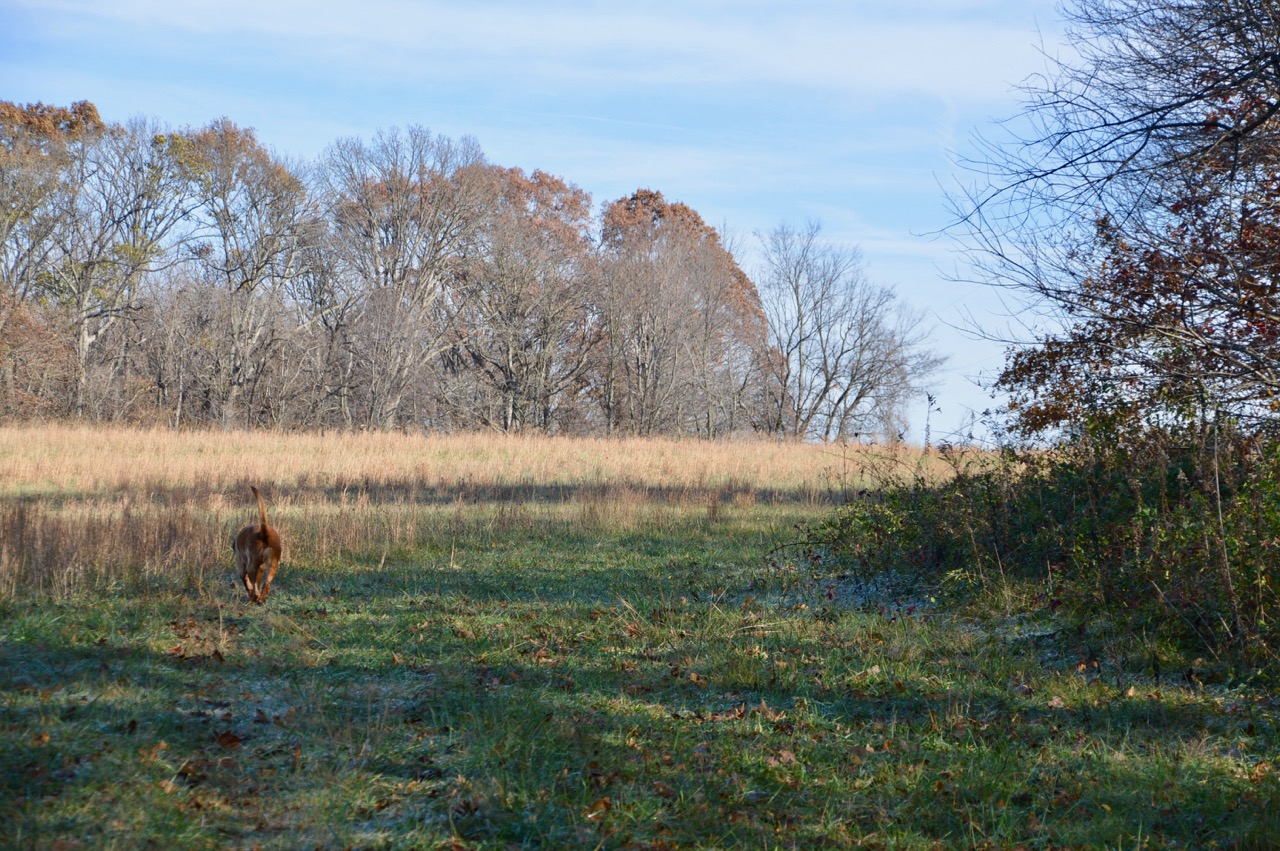 I remained calm enough while thinking that my old brain cells then let me know that I had bought a scissor jack years ago for my other Z4 and most likely it was in the small shed. It was, in the original box out in the open and in mint condition.

I guess I need to back up a little for new readers, to let them know what I am talking about. I took a road trip in late September to see an old friend 96 miles away. It was all freeway driving until I got to his town. On the way back as I pull off the freeway exit ramp 6 miles from home, I hear something dragging and it's my plastic grill that sits low to the ground. I'd had trouble with it before but on this occasion plastic parts had broke and the grill was dragging the highway as I drove. You can read about it here if you are interested, toward the bottom of the post. 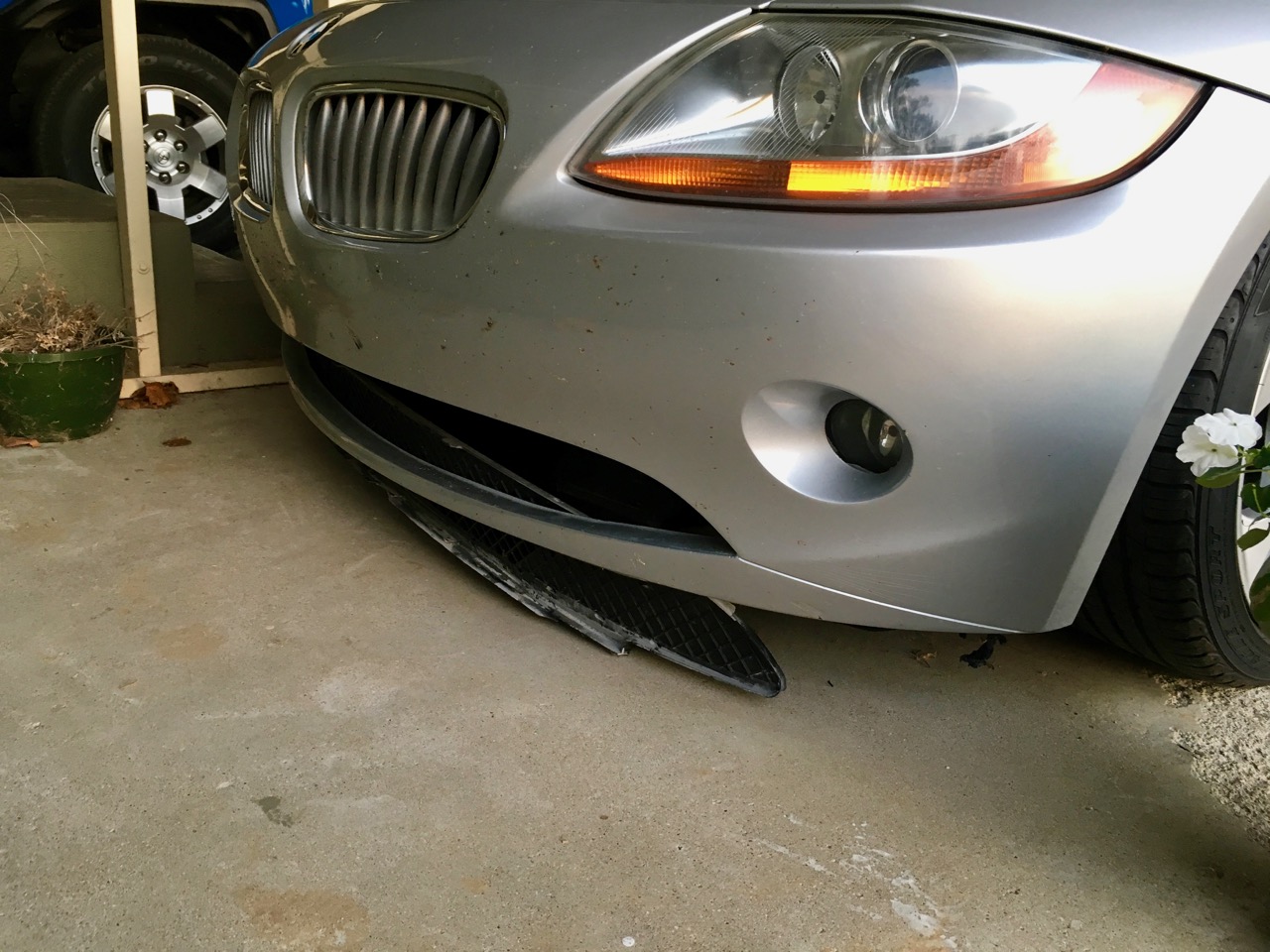 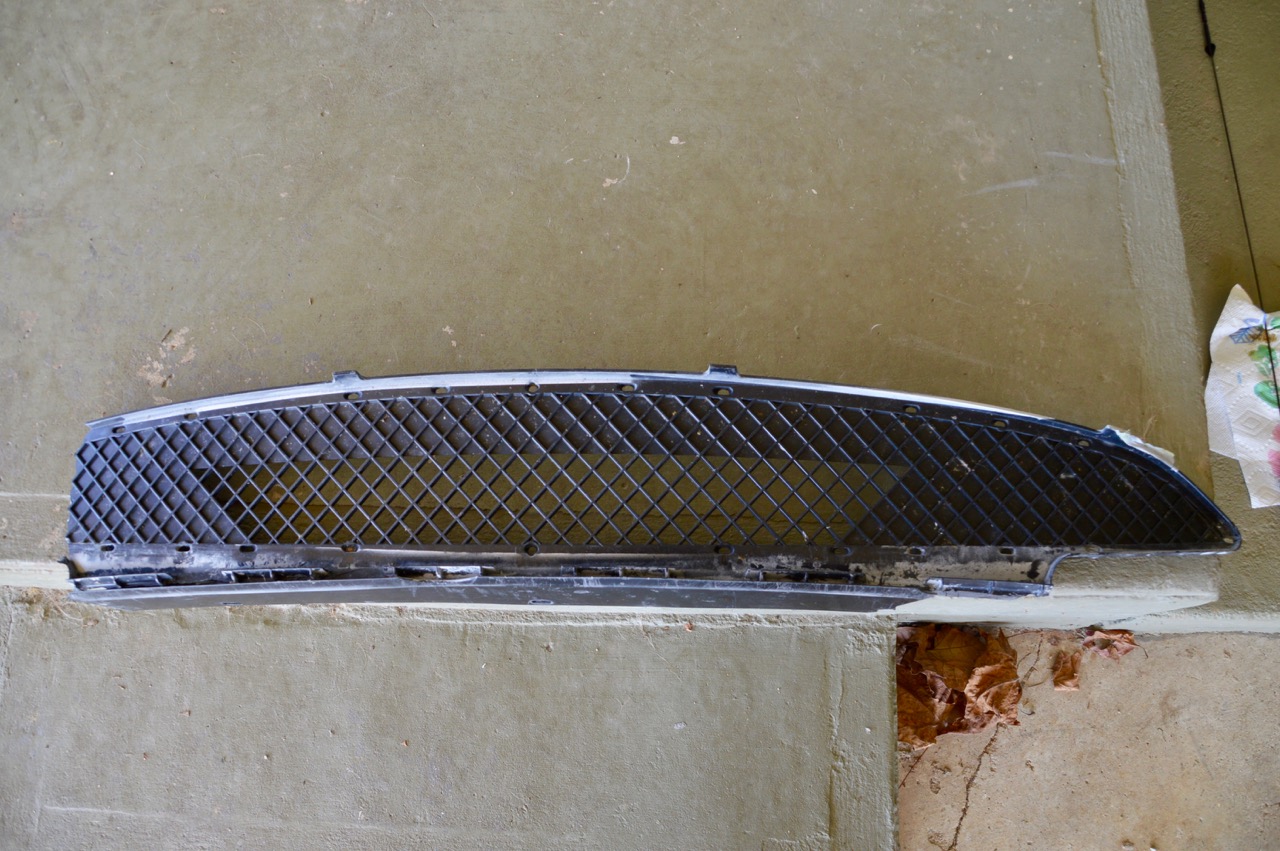 I was in for a pleasant surprise as I raised the car with the scissor jack. I had some brand new ramps that I thought I could not use because the edge of the front bumper was too low. I was not even close to getting the tires onto the ramp when I tried last week because the low bumper hit the ramps before the tires could reach it.  Since I had jacked up the car a little, it gave me enough bumper clearance to slide the ramps to the front tires ... now I could drive up on the ramps, giving me more room to work under the car than the jack stands I had. 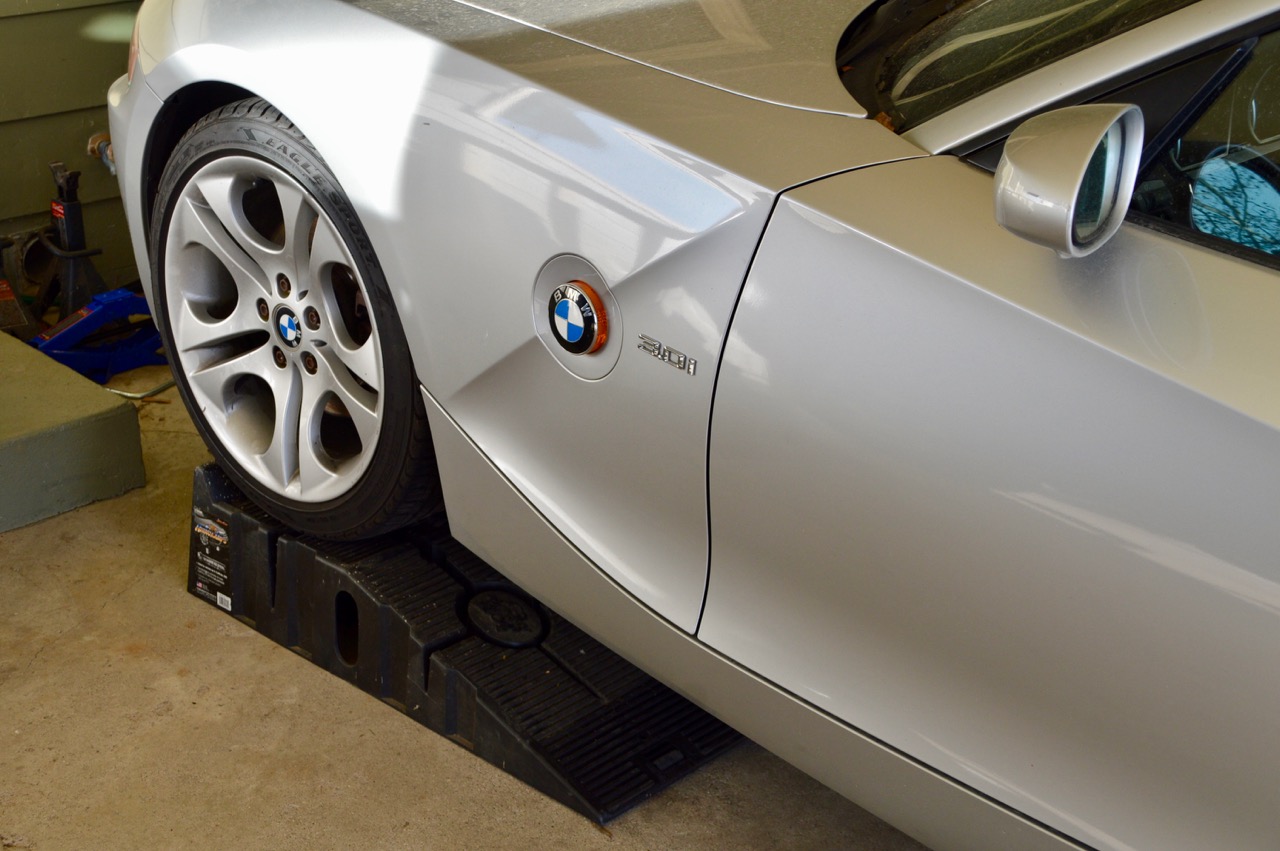 I put the car in gear, set the emergency brake and slide tire chalks behind each rear tire. I crawled under the front of the car to look around, take some pictures with my iPhone and decided why not start by taking off the parts that were damaged. It would give me a little head start on the repair.

So with an 8mm socket wrench and an 8mm closed wrench, 6 screws later I had 3 of the damaged parts (in pieces) off the car. I had pulled out the damaged grille a couple of weeks ago out of curiosity.

I also have some new black lug nuts to replace those with surface rust, while doing this job. Nothing like changing them out in 30° weather when I could have done it in 80° weather last summer. 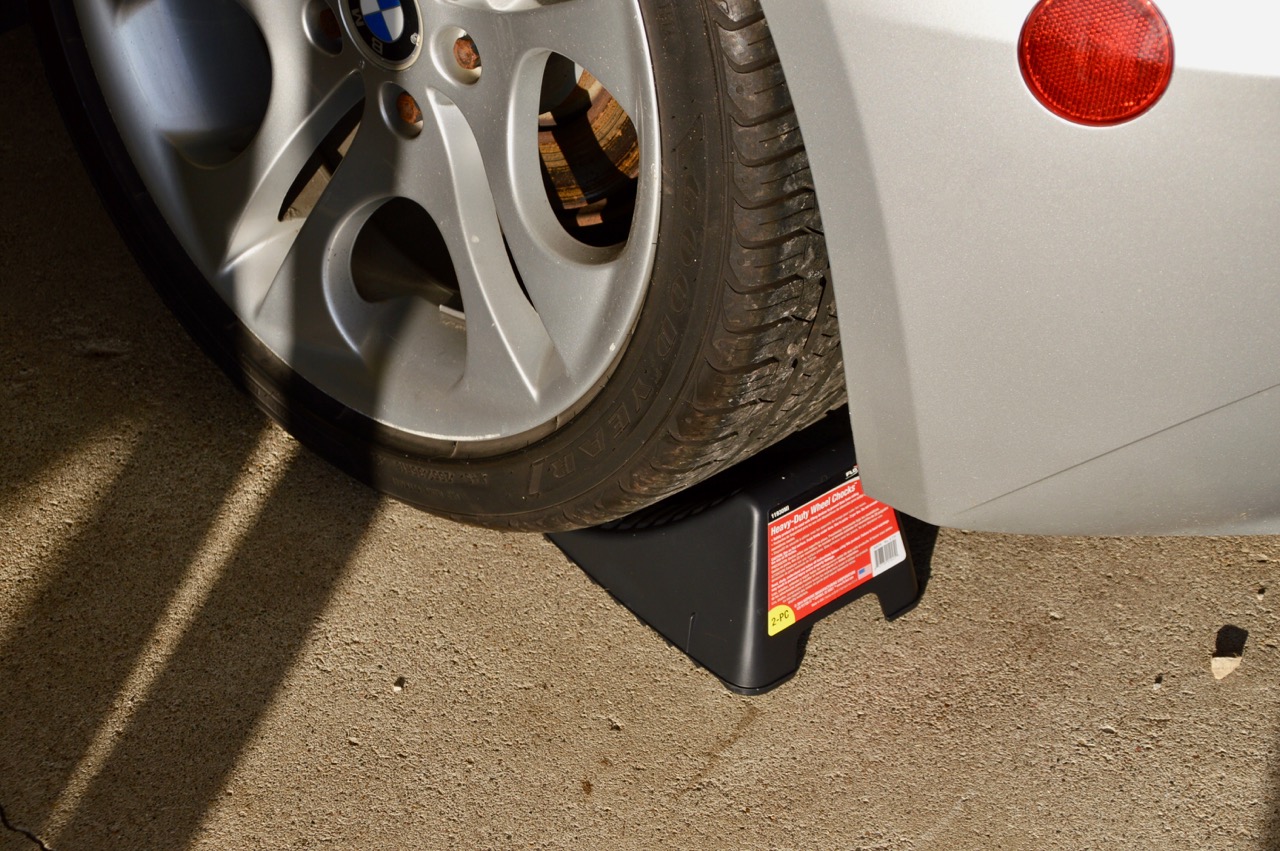 All of this took only 55 minutes. Now I know that it will take longer to put things back together. I am expecting some 'hiccups' along the way but one thing I am hoping to avoid is having to take off the front bumper. I've read on the forum of Z4 owners it is possible to change out the grille without taking the bumper off, but it would make the job easier if I spent the the time taking the bumper off.

I've looked at videos on how to take the bumper off. It's simple and about a 15 minute job but one I am really not enthused about doing. I hate breaking the integrity of the car body and taking a chance that bumper does not fit as well once it's put back on. Could something else break if I were to take it off? So I'll try doing the job first with the bumper on and go from there.

I also have new hardware arriving today to replace the old rusty screws and washers. 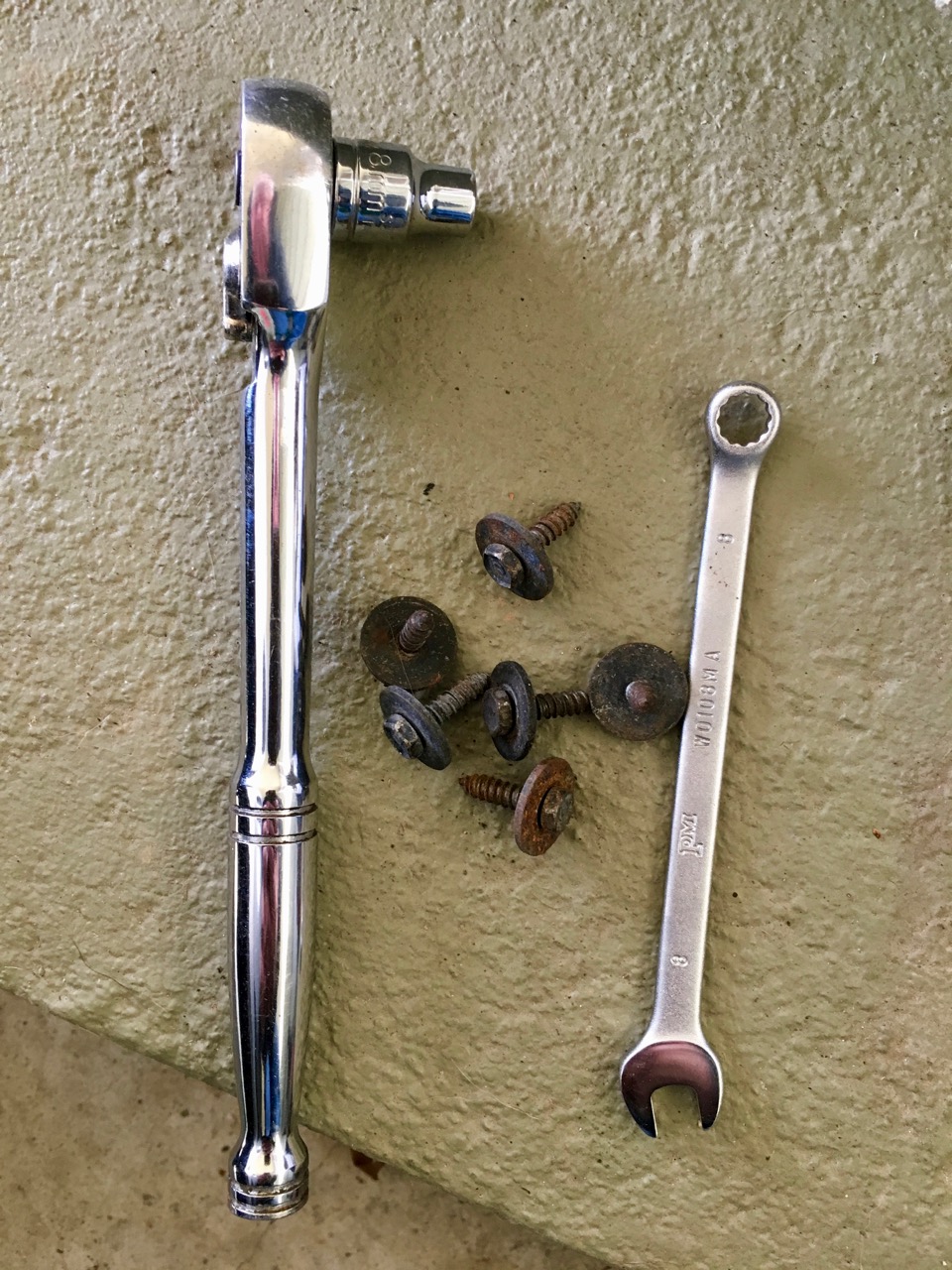 The insurance estimate had 8 parts listed, 2 I did not need to replace, 1 is being shipped from Germany and 1 other one may not be needed but I'll not know that until I start putting the new parts back on. Those are not whole parts below. The last small junction between the bridge and highway, had a loud explosion at 55mph and small back parts flying out the back from under the car ... my view in the rear view mirror seemed to see them all in slow motion. 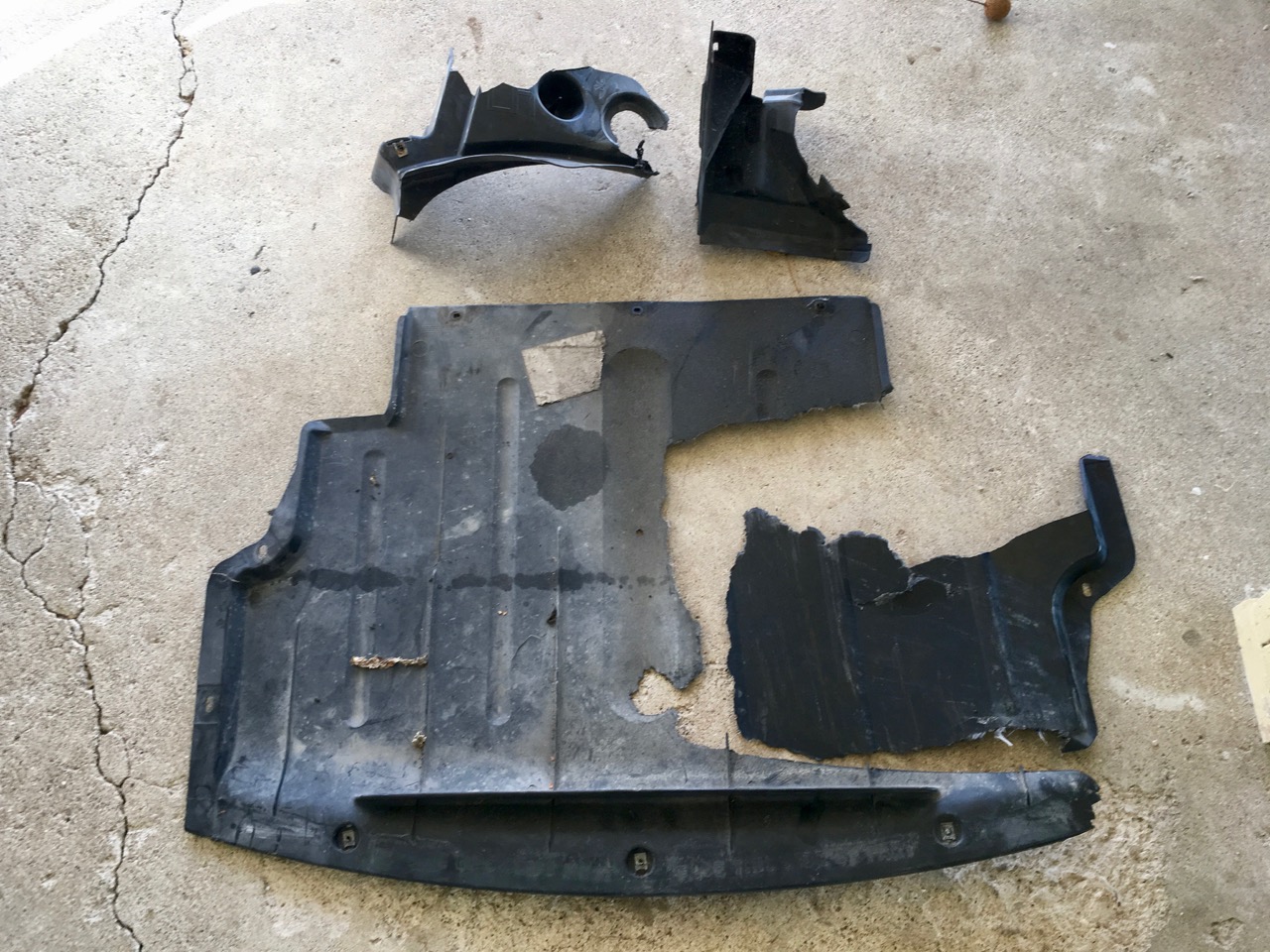 After the job is complete I'll either do a specific blog post with pictures included or I might just link a folder of all the photos I'll export to my Flickr account, so anyone interested can see all the pictures I took from start to finish.

Just as I guessed the first time I looked under the car, it should be and is so far, a simple repair although I am nowhere close to being a professional mechanic or auto body repairman.

Stella had her tail up and curled a lot this morning. She seemed to be on her own mission of tracking scent and covered a lot of area, even with her late start. 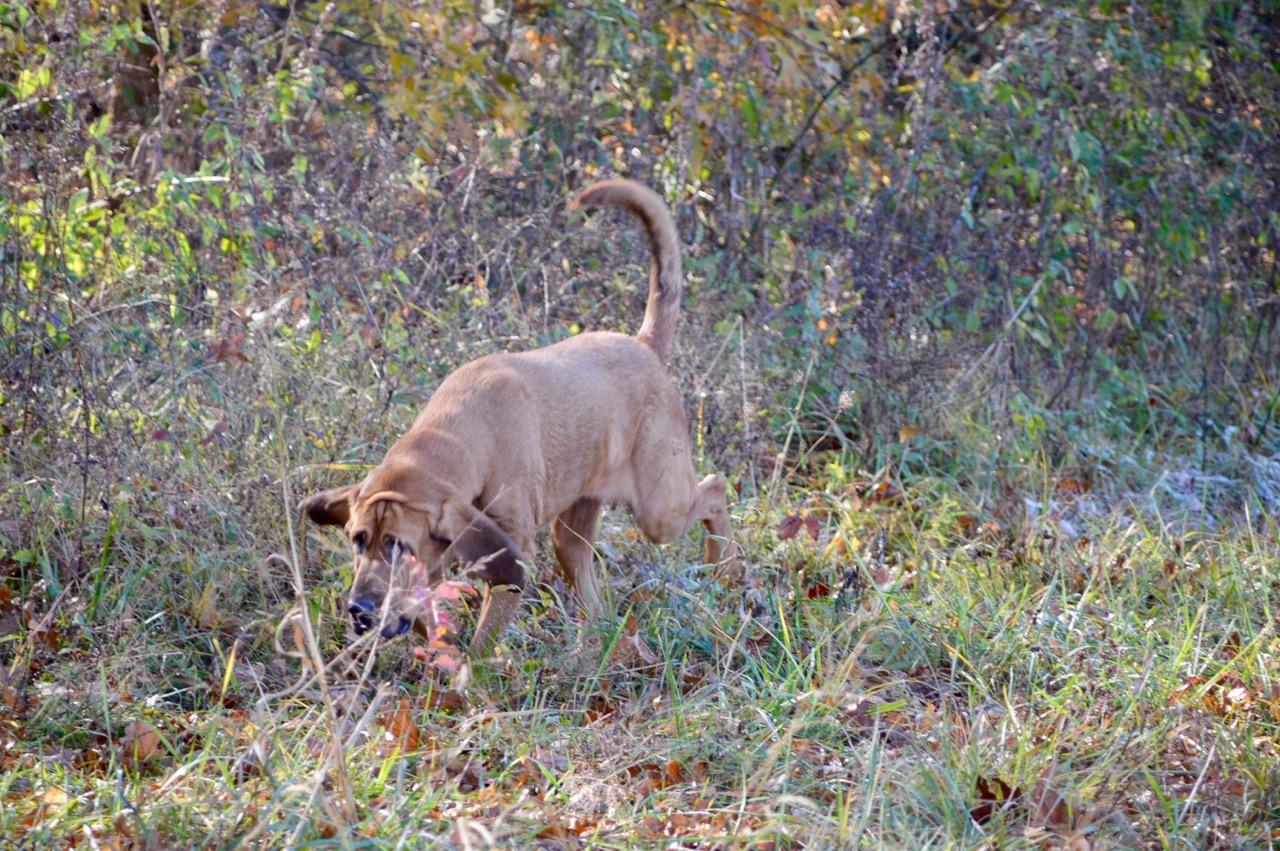 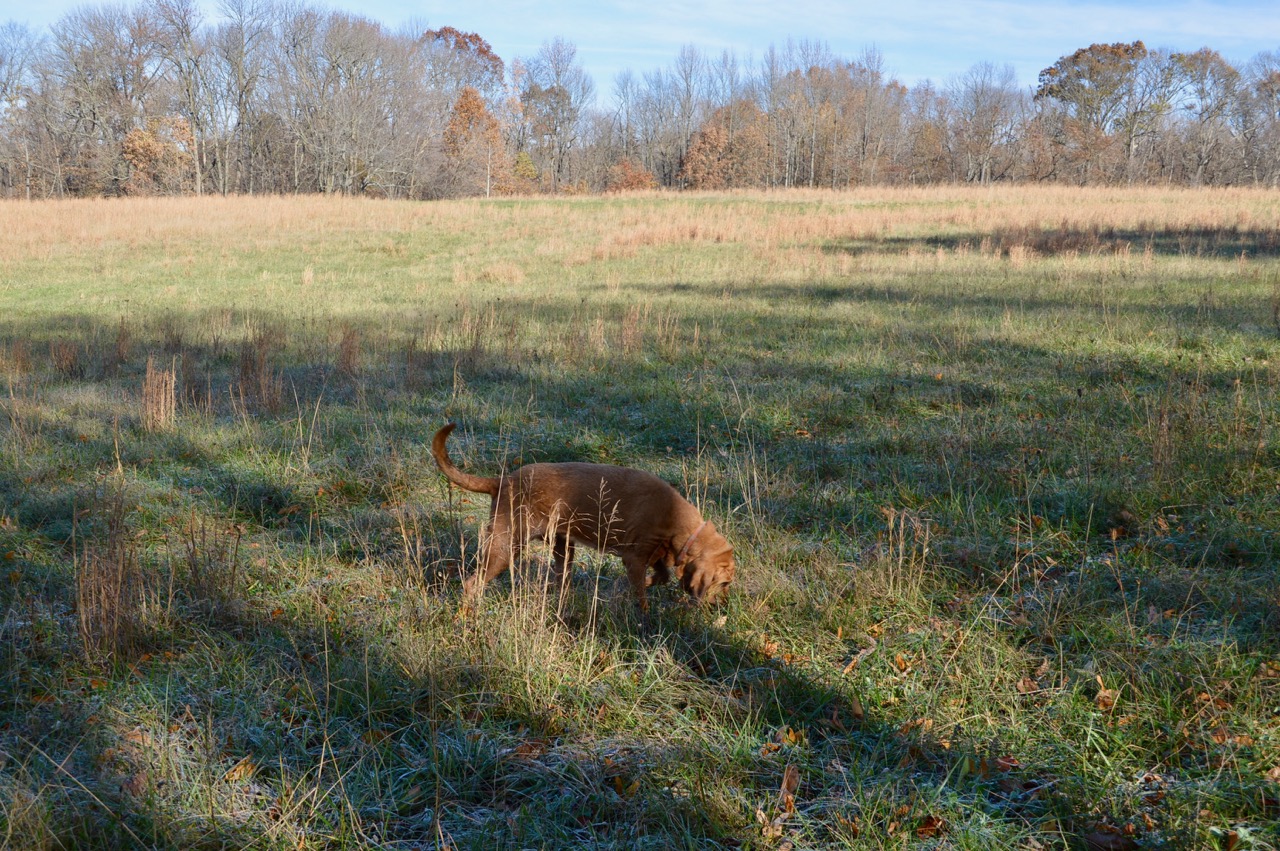 I thought both hounds would stay in this spot like they have recently but before I could get there, Stella took off running for the 'far right corner' and Sadie veered left to search the middle of the field. 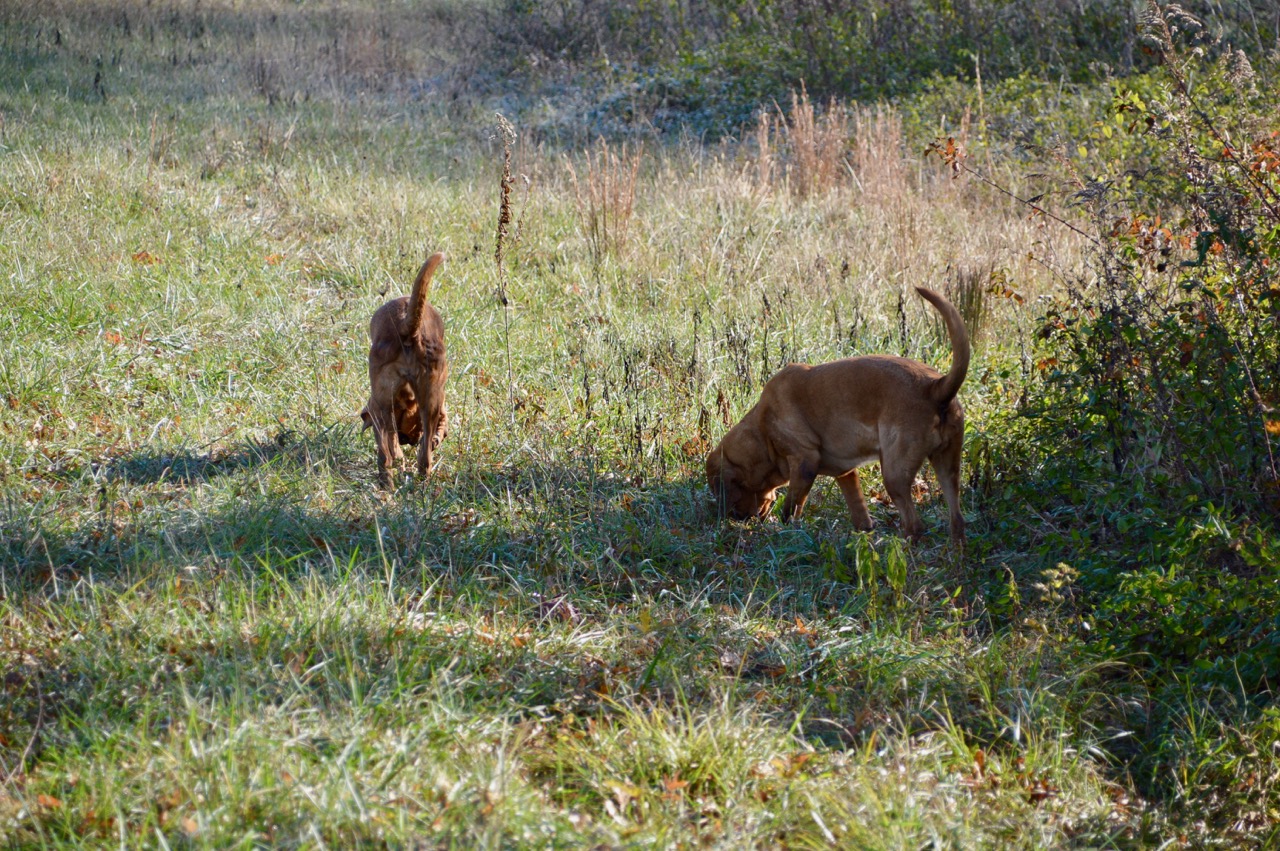 I decided I'd follow Stella once I got to the corner and then herd her back to the direction of the path we take. Instead, Sadie did that for me. 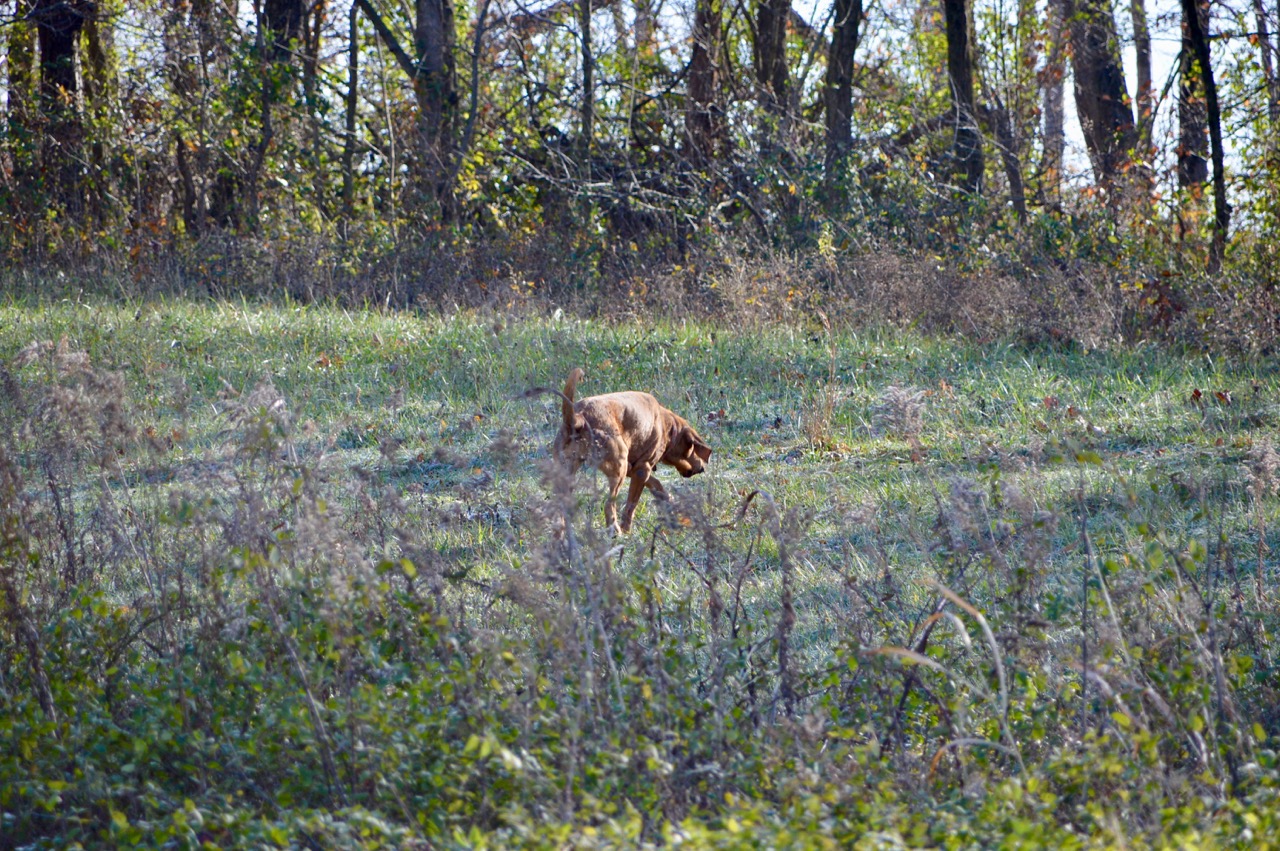 Sadie was moving in different directions in the middle of the field to the point that I thought she might take off on me while I went to get Stella. 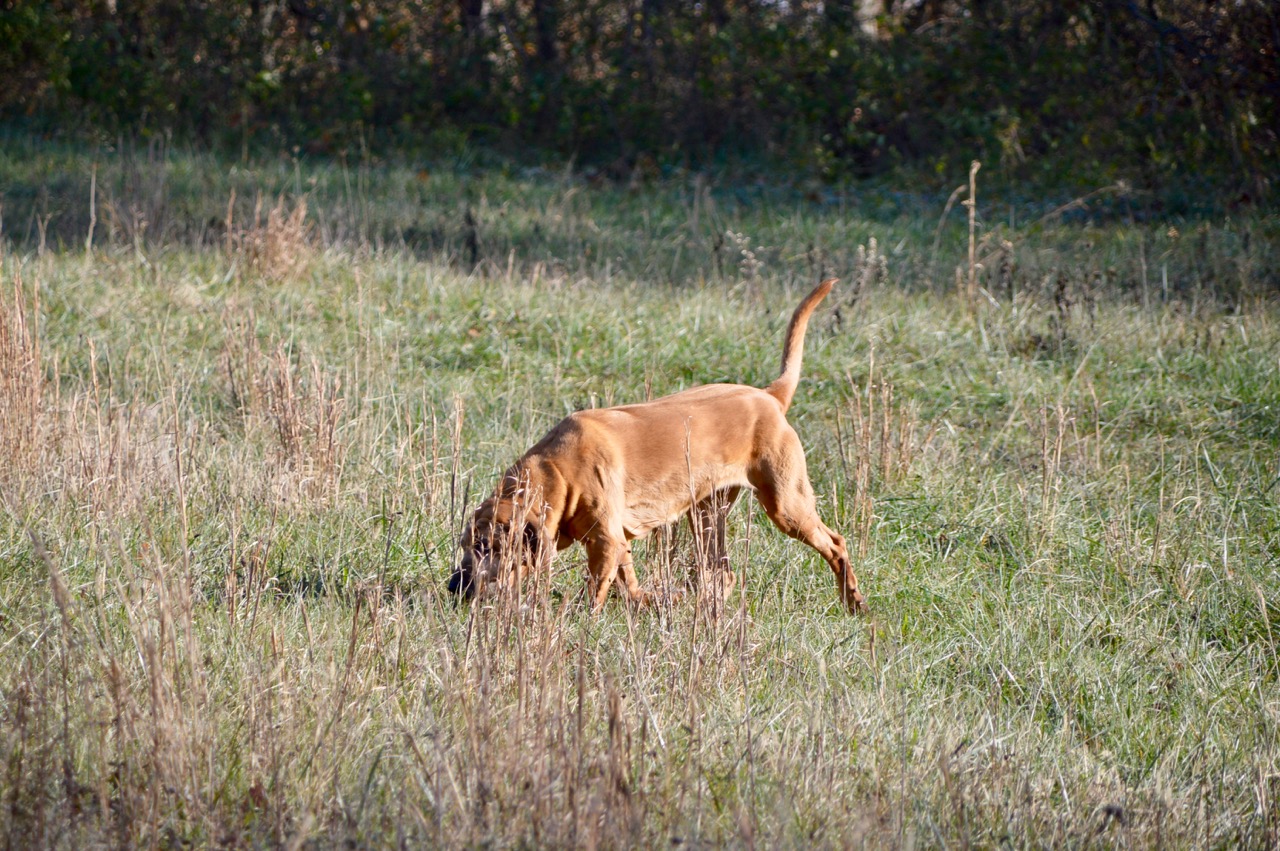 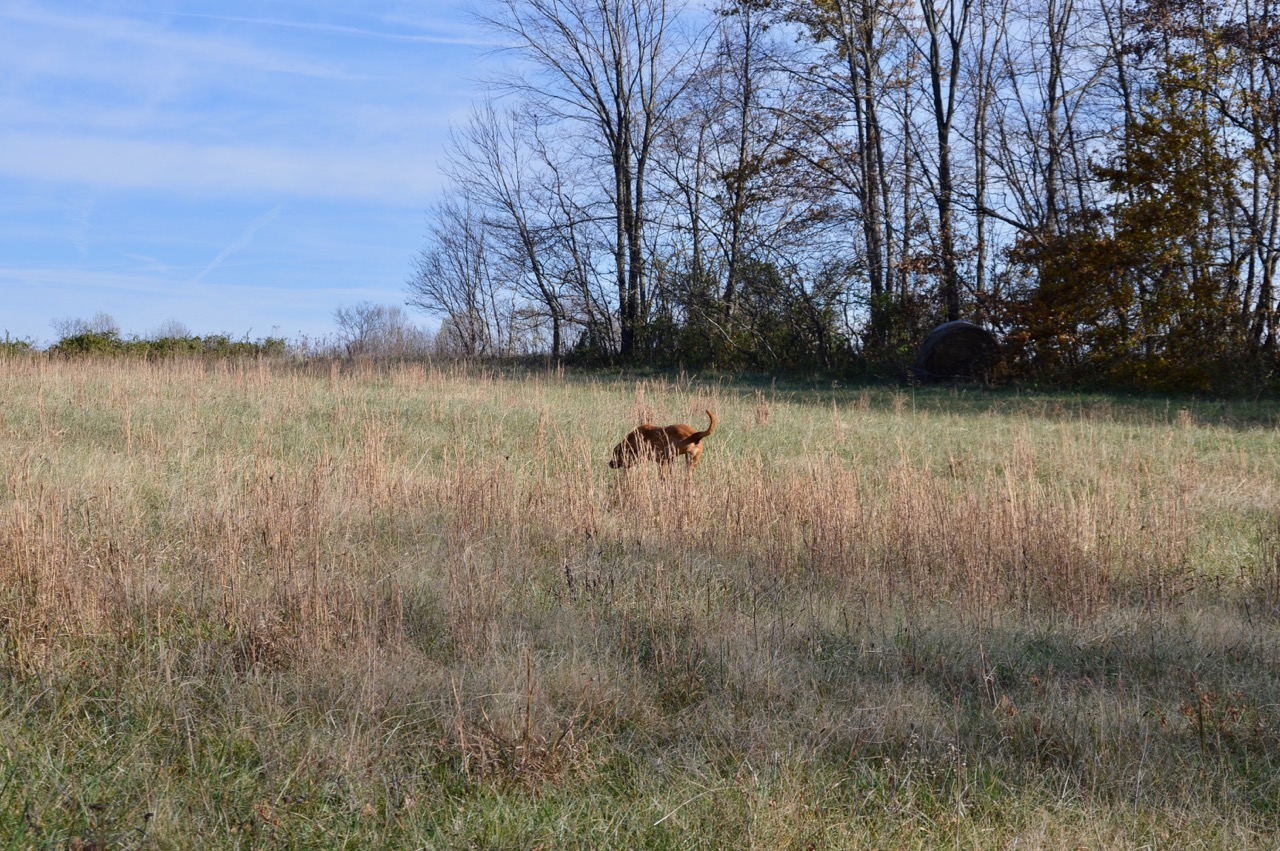 About that time she realized that Stella was not out in the field with her. She stopped and studied the air with her nose, turned looking for Stella and then realized that Stella had snuck off to the 'far right corner' without her. She sprinted faster than my camera could react ... doing the normal 'nose touch' telling Stella to head back with her. 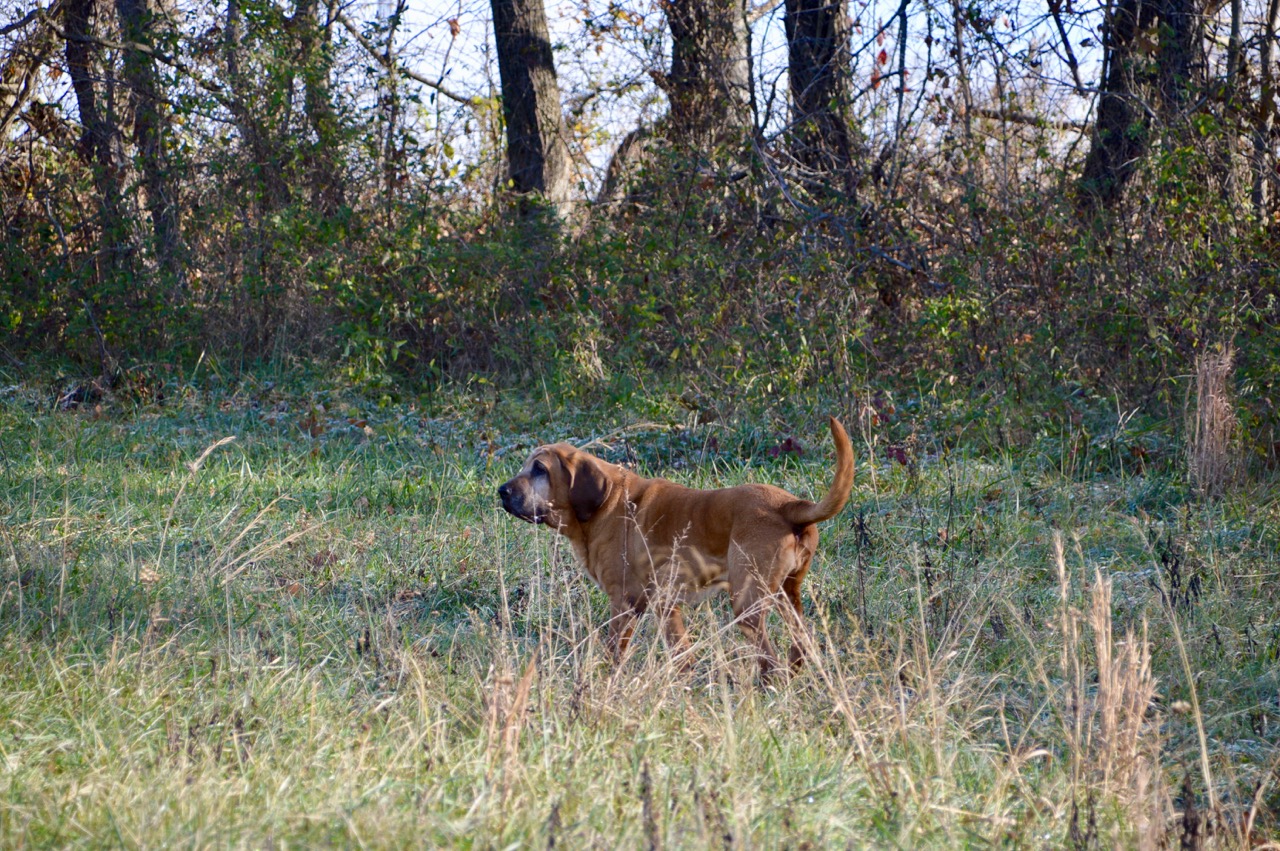 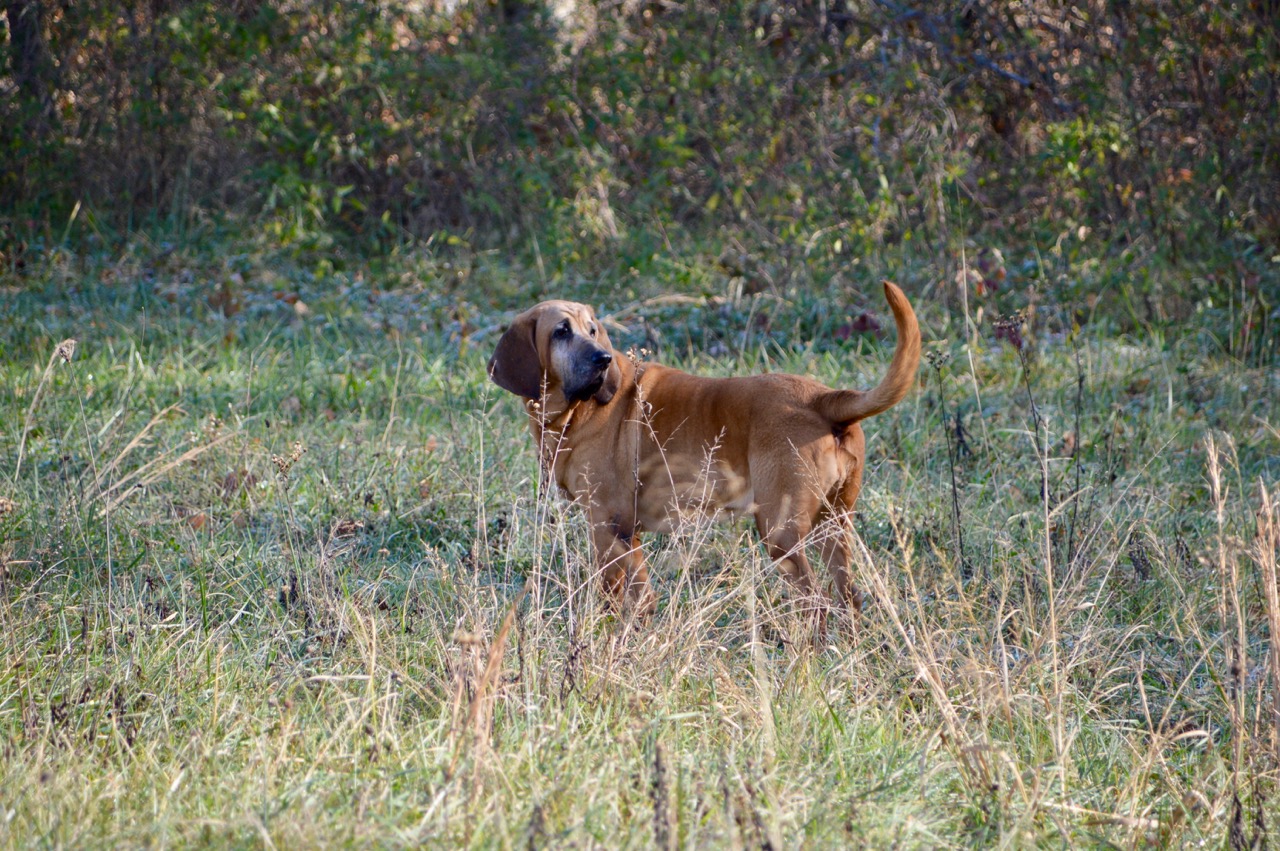 It's amazing how Sadie can be sprinting full speed and stop within inches of Stella's nose without a collision. 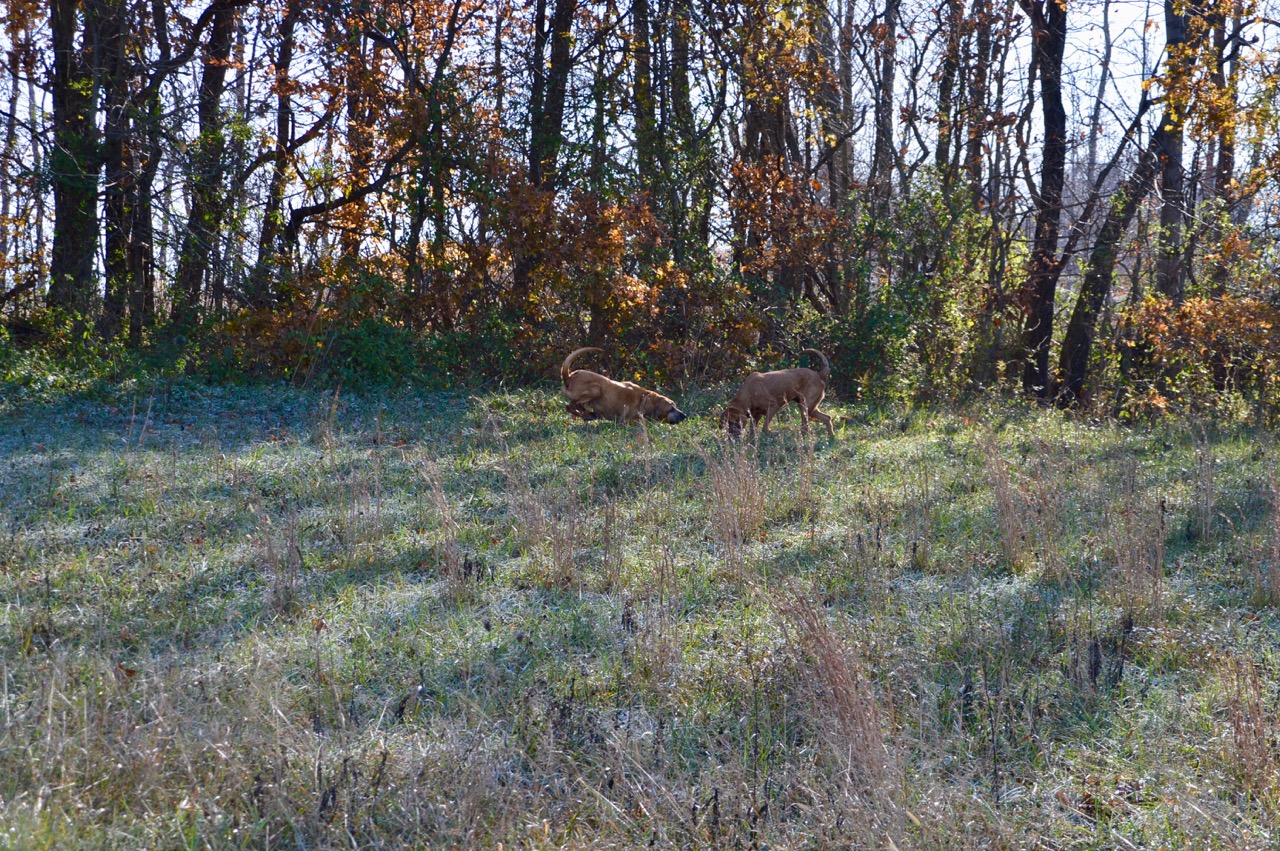 And as directed by Sadie with that 'nose tap' ... Stella followed her command, both running along the edge of the field. 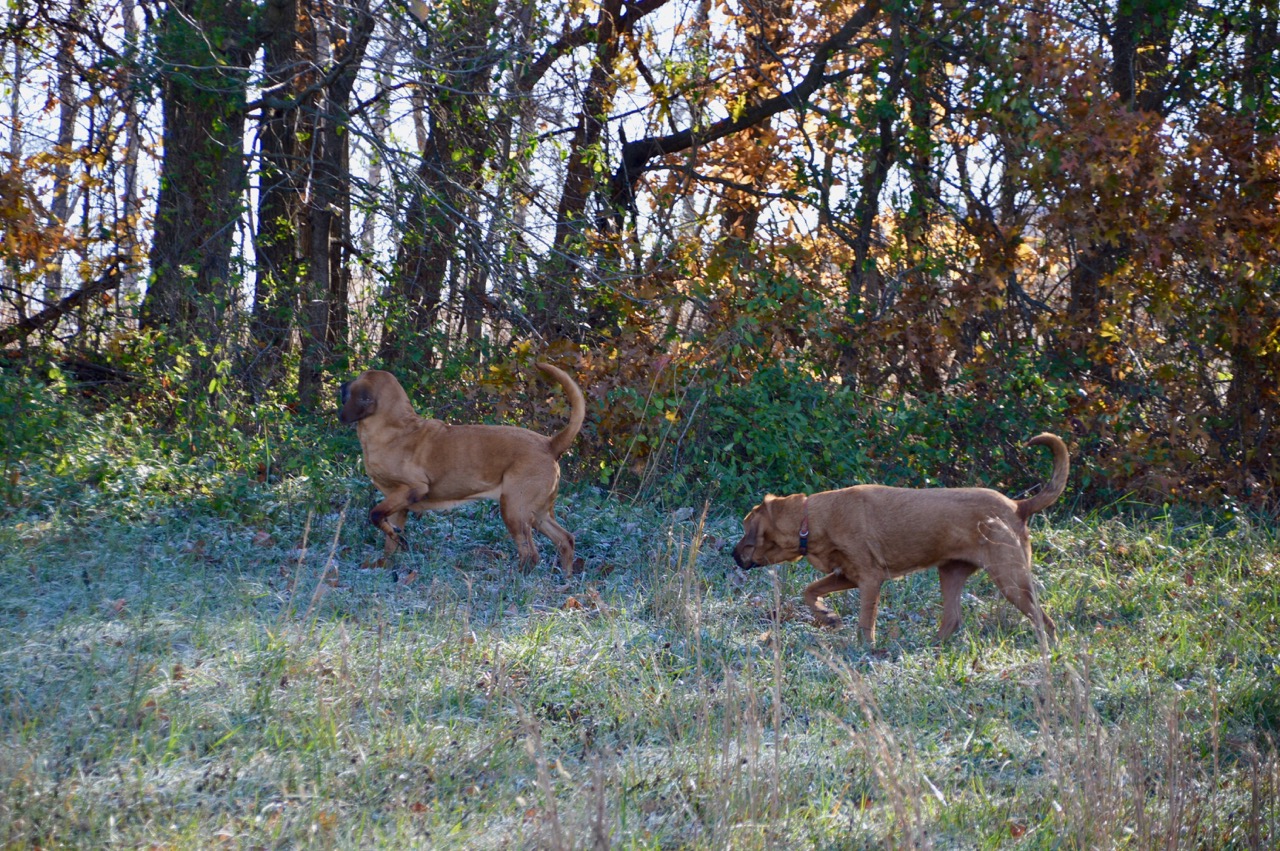 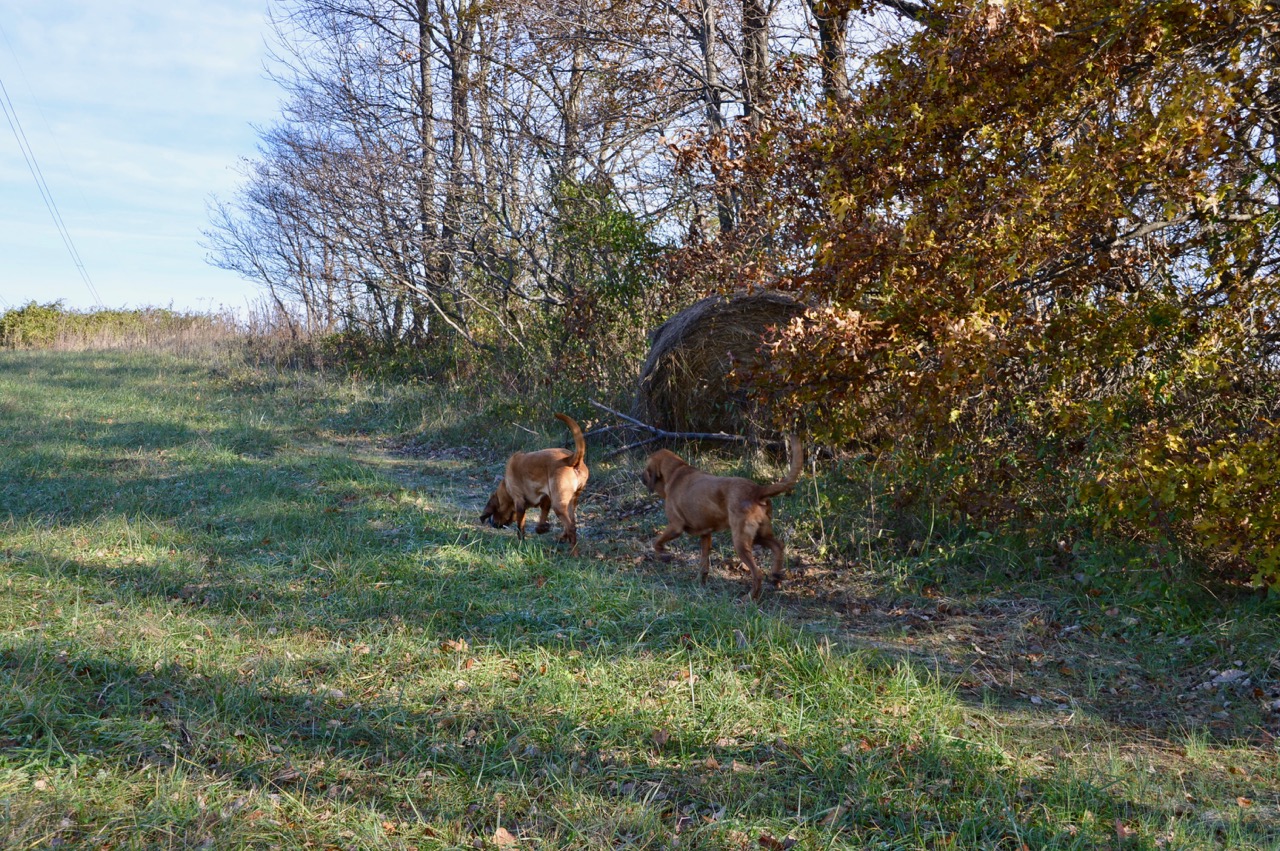 With the wind blowing stronger than I have felt in a while the deer scent must have been stronger than previous days. By the way they were reacting I was certain I would be sprinting after them by the time I got to the area where we turn to go home. 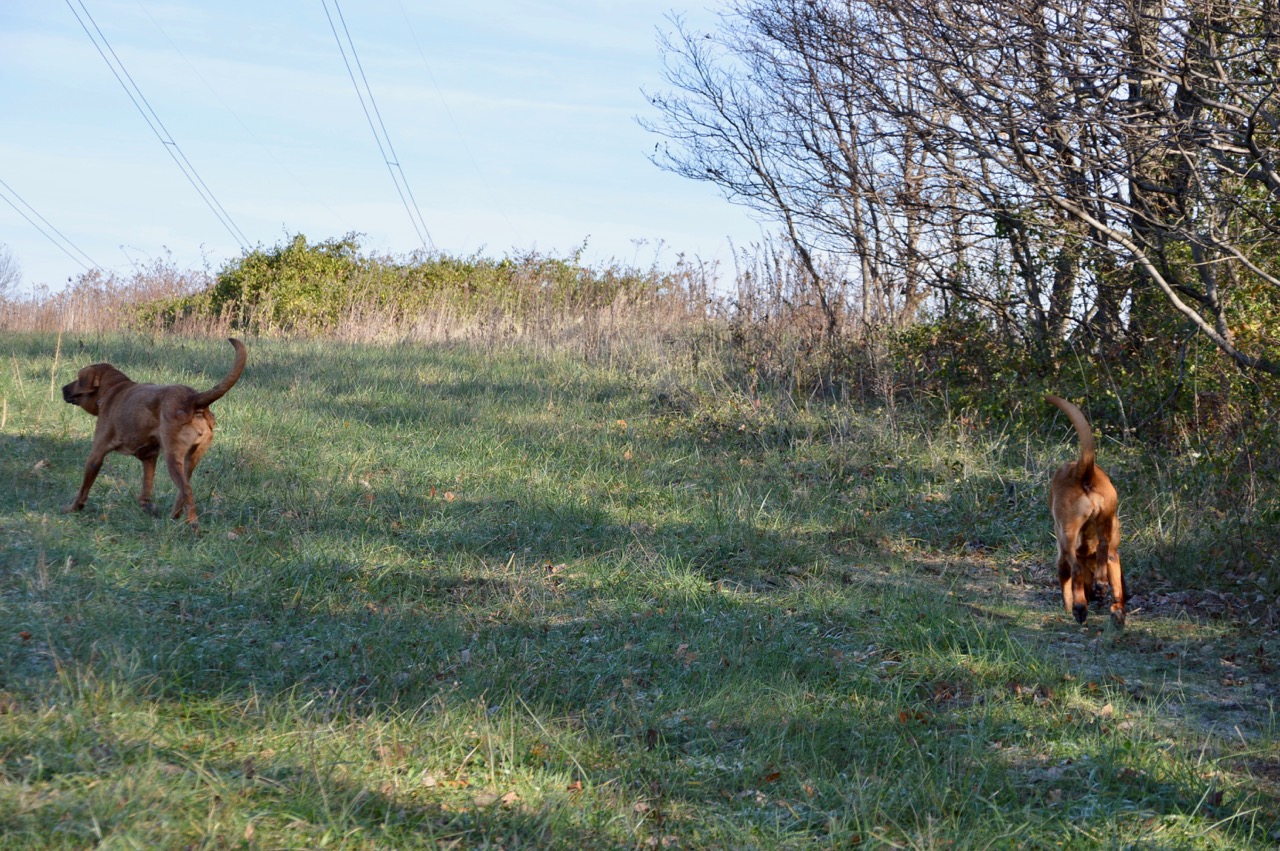 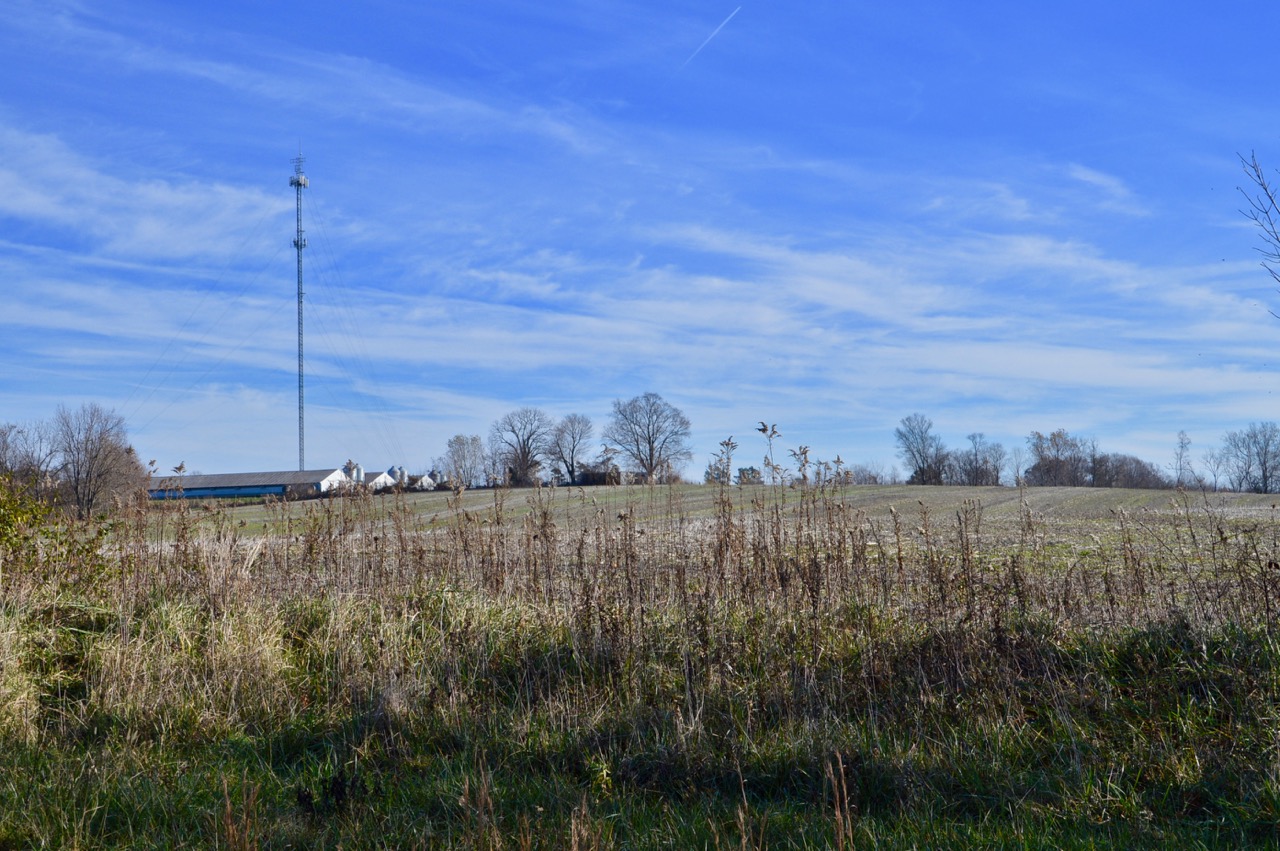 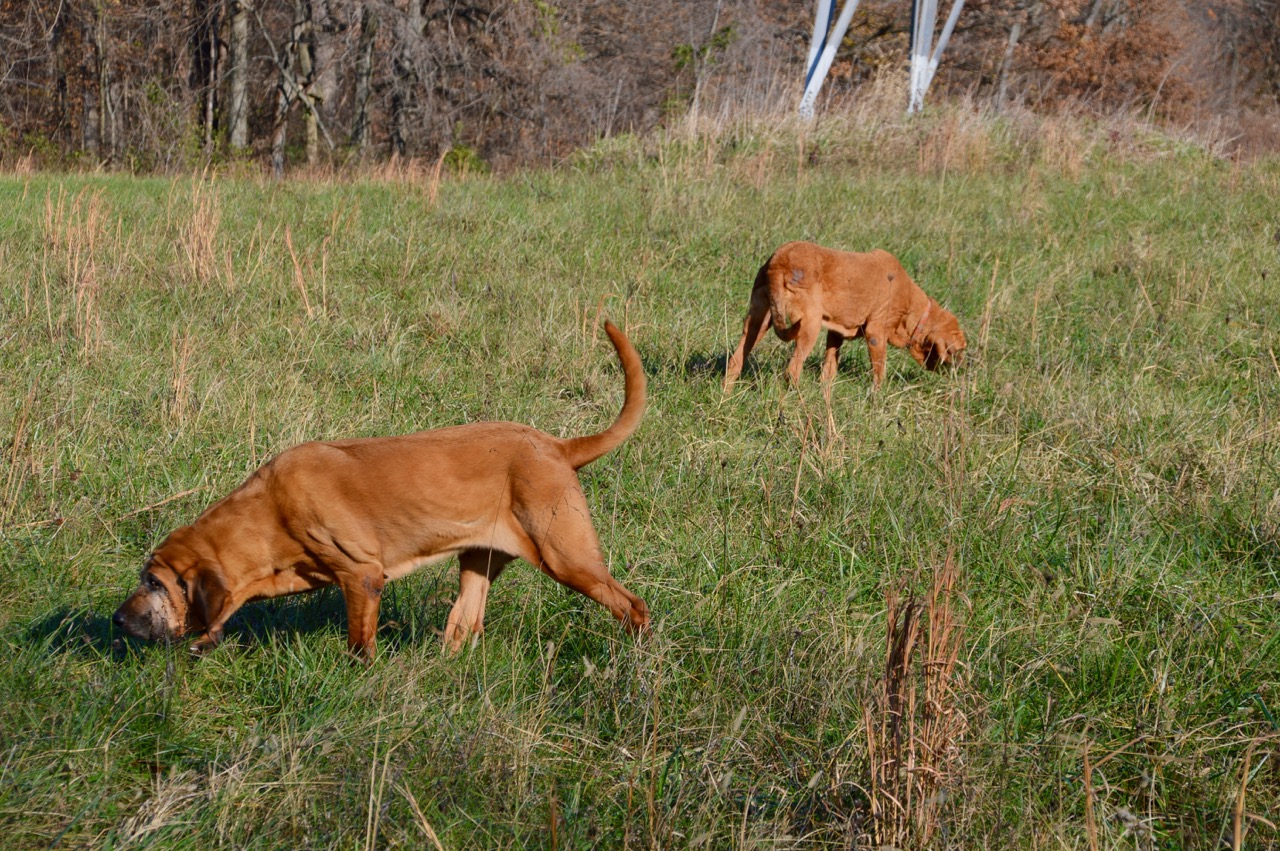 Reluctantly Stella headed back and Sadie sprinted ahead of both of us. 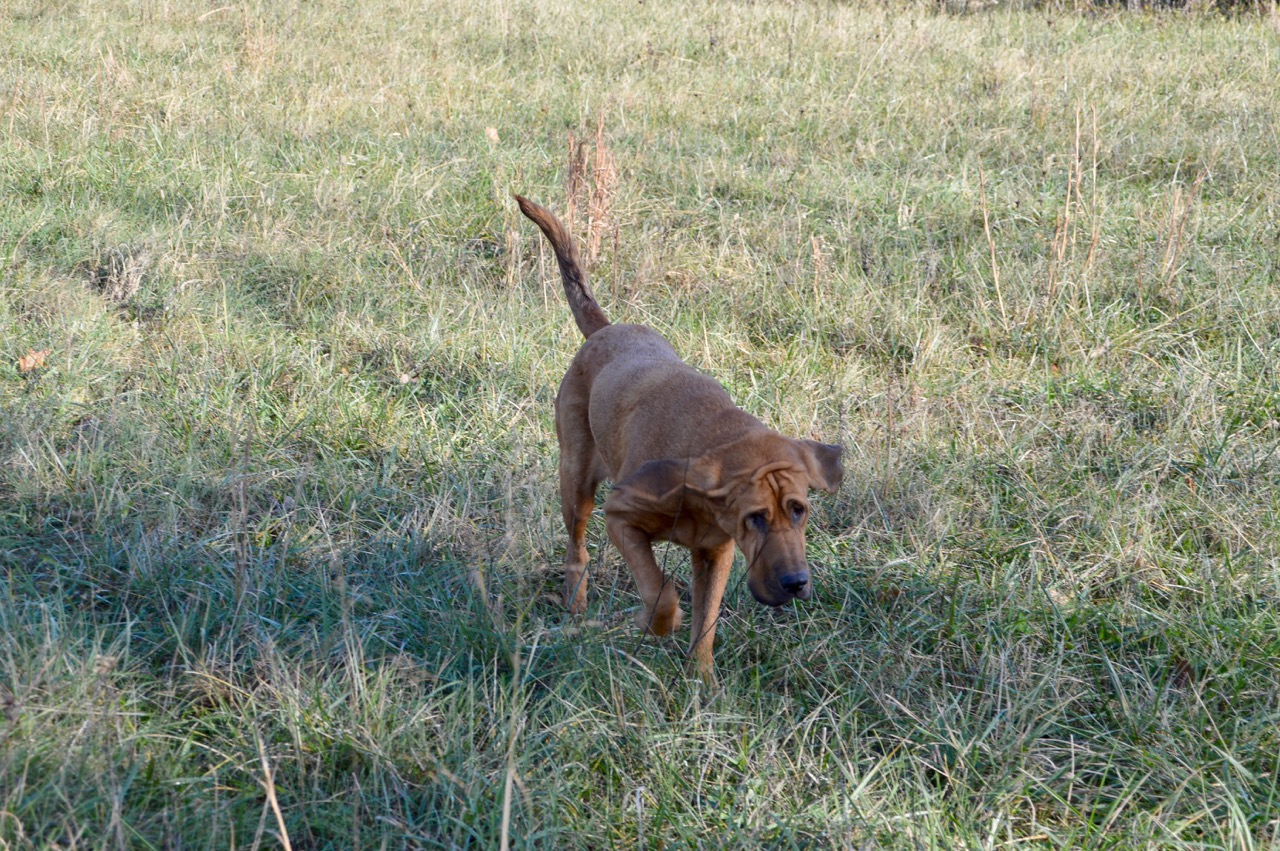 With my glove missing, I wanted to make sure it was not in the field where we started our walk. I did this with the most expensive Sony Erickson flip phone many years ago when they first came out and couldn't find it. Luckily, I had a second phone from work that I could call my personal phone and track the ringing in the field to find it.

Today was different ... I told the two bloodhounds with the infamous strong noses "we have to find my glove" ... it was funny as they reacted as if they understood what I was talking about ... putting their noses to the ground and their tails curled upward. 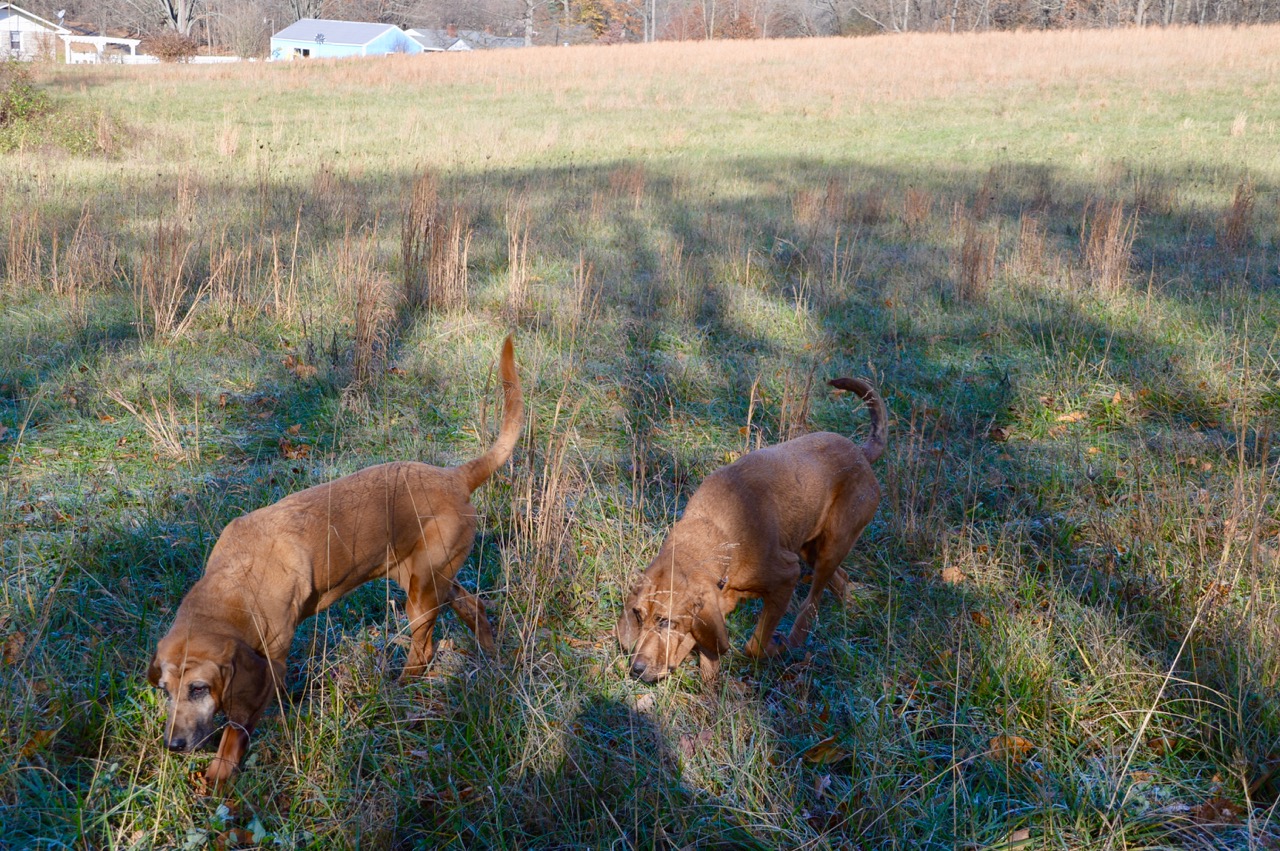 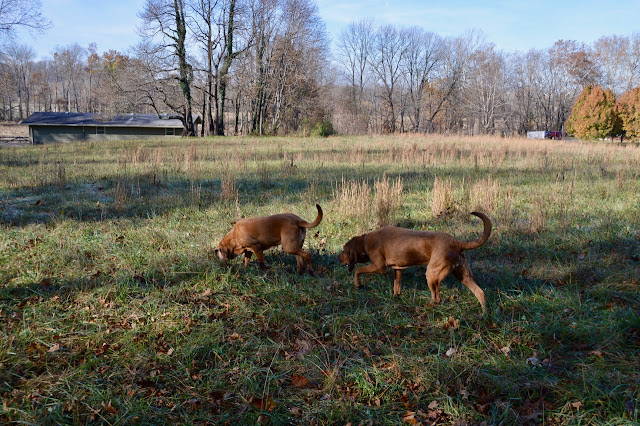 Sadie searched and searched as Stella and I walked into the backyard. She added some additional radar with her ears rolled up together as if they were tied. That's what happens when a bloodhound is sprinting while she is sniffing. 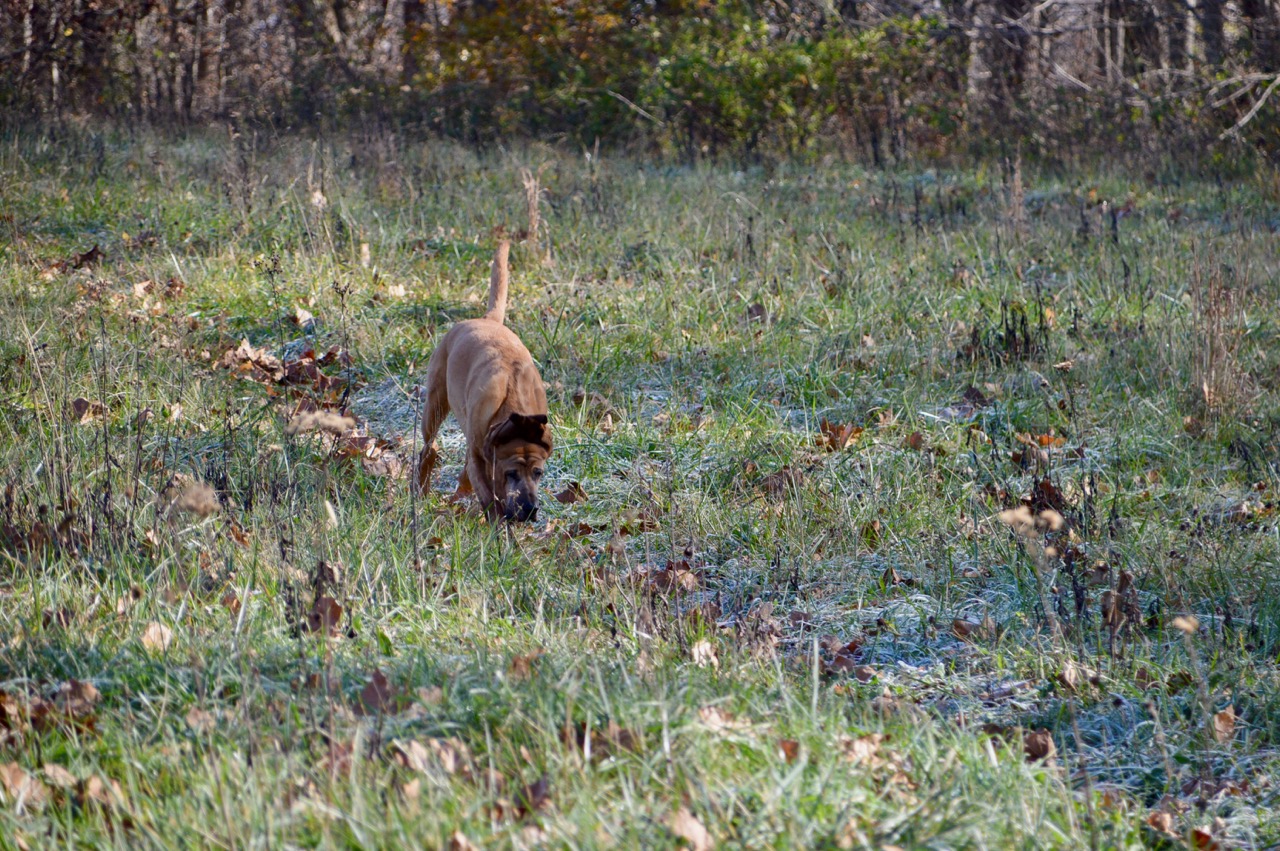 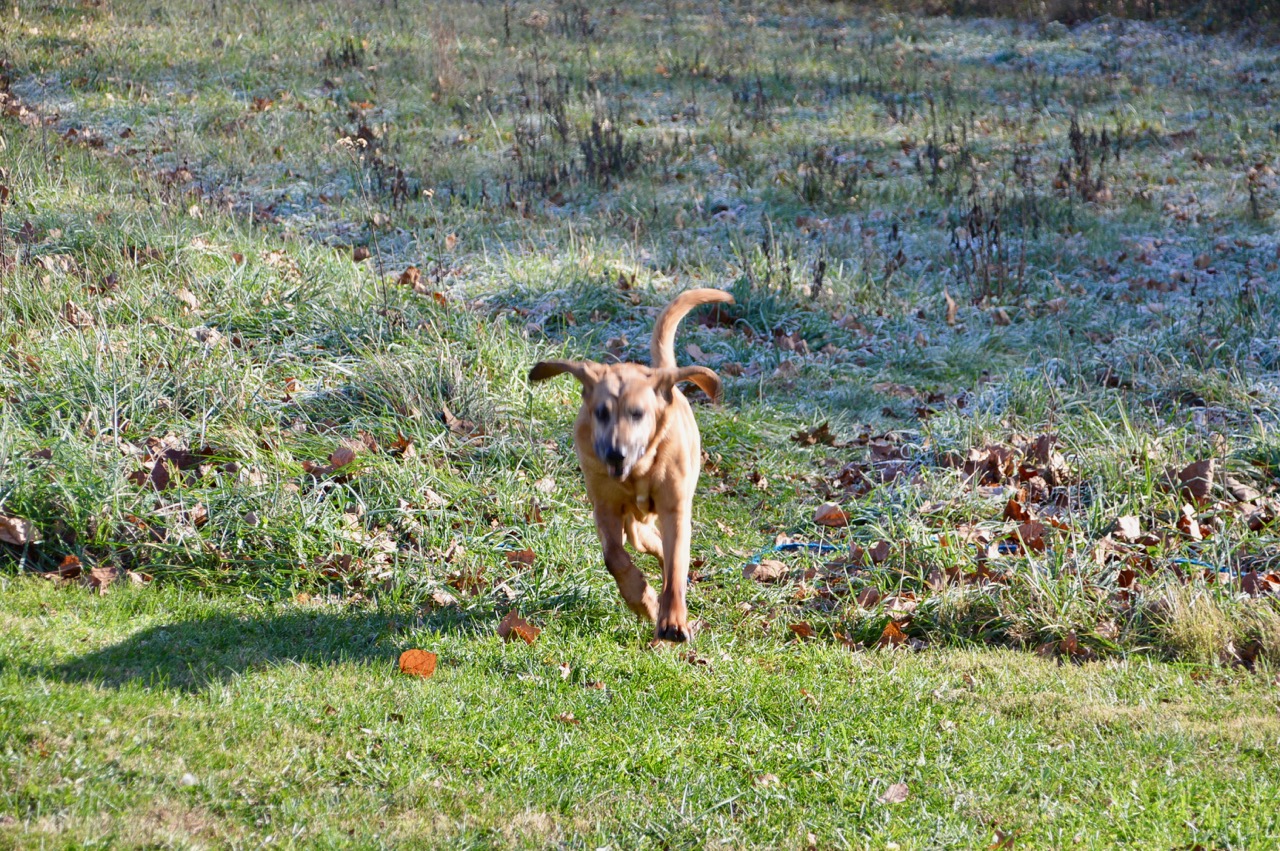 It's nice to have the sunshine because that mentally takes away some thoughts of just how cold it was this morning. A high of 51° will arrive late afternoon. All the small twigs and one tree limb were picked up out of the yard yesterday and the 2018 burn pile has been started. I may have to drive over to the grocery isle to pick up the rest of the food needed for Thursday, before the shelves are empty from a mass panic from last minute shoppers.

I am going to stick to only two pies this year, pumpkin of coarse and pecan. It's hard to cook for just one person so there will be plenty left over that will get me through 4 days of college football and some college basketball mixed in.

Heidi is in her all out winter hibernation. She doesn't want to go outside, doesn't like having her picture taken and will only appear alive with a pulse to eat breakfast and lunch. There is no depression involved with her, just her normal cold weather routine.

A lot of progress the last few days inside and out .. all is good in 'the tropics' of Southern Indiana.
at November 20, 2017