The Hounds Check Out Rain Except Heidi 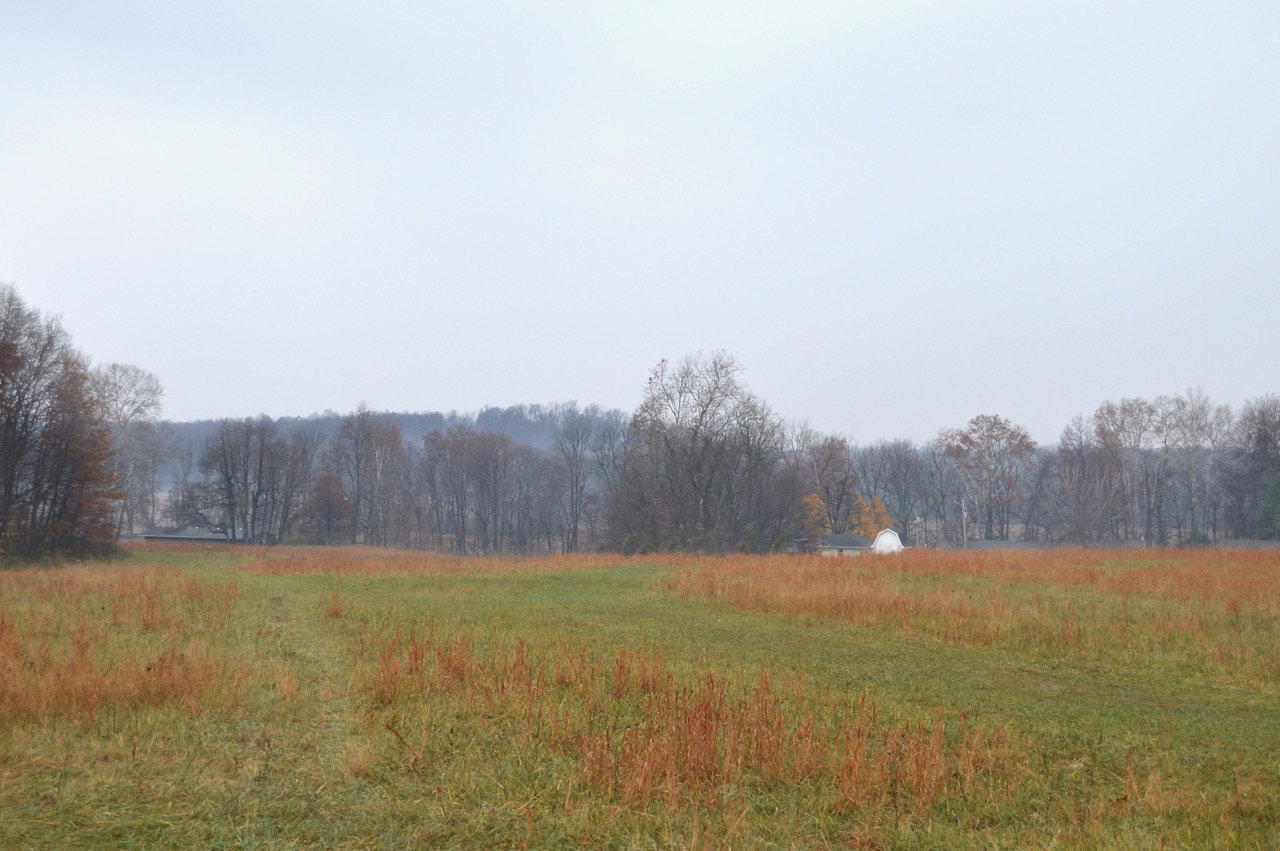 All of that nice weather I've been bragging about has left again. At least it's not cold and the rain is suppose to stop by 1pm today. That will give me some time to work on a computer mistake I made yesterday. Nothing drastic, nothing that crashes my computer. We took off this morning in what looked like rain but looking through my binoculars standing in the kitchen, I did not see any rain coming down through the Sycamore tree. They hounds of course were happy ... they don't care about weather, they just want to walk.
Sadie took off sprinting while Stella had some fresh wet tall grass to supplement her morning kibble. After every rain I guess the grass tastes that much better to her. 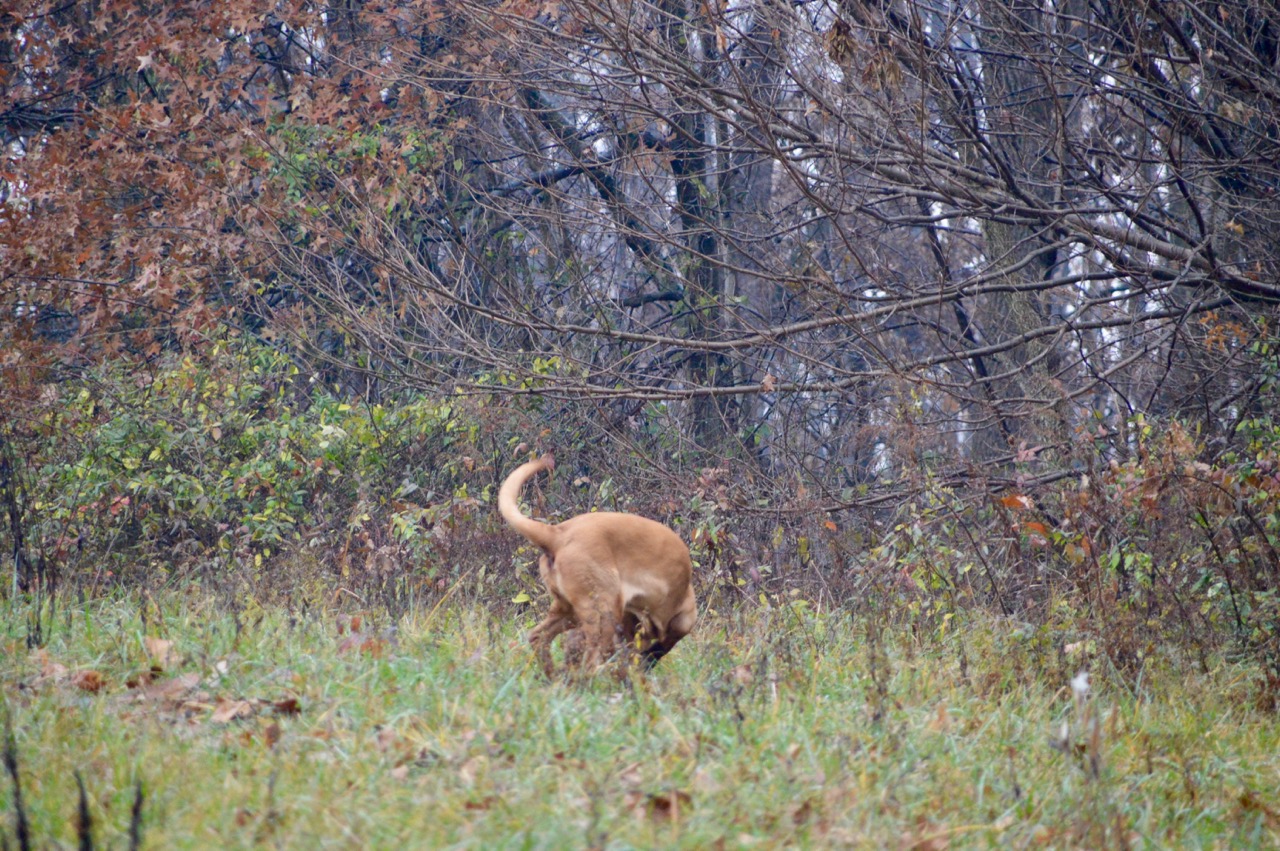 Once she saw that Sadie had found something she took off sprinting ... no way was she going to miss out on something Sadie had. 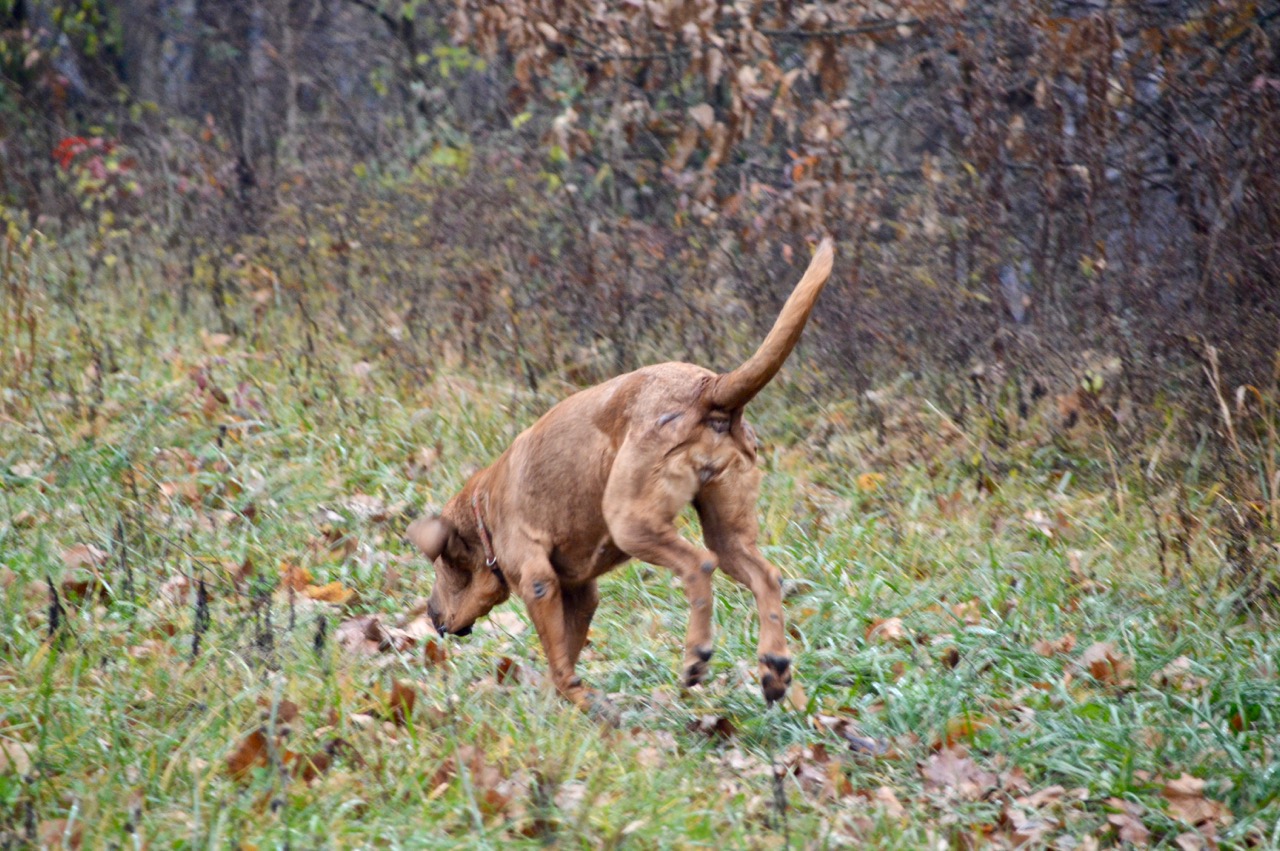 I was dressed for light rain, heavy rain or no rain ... so I walked my pace, they walked theirs. 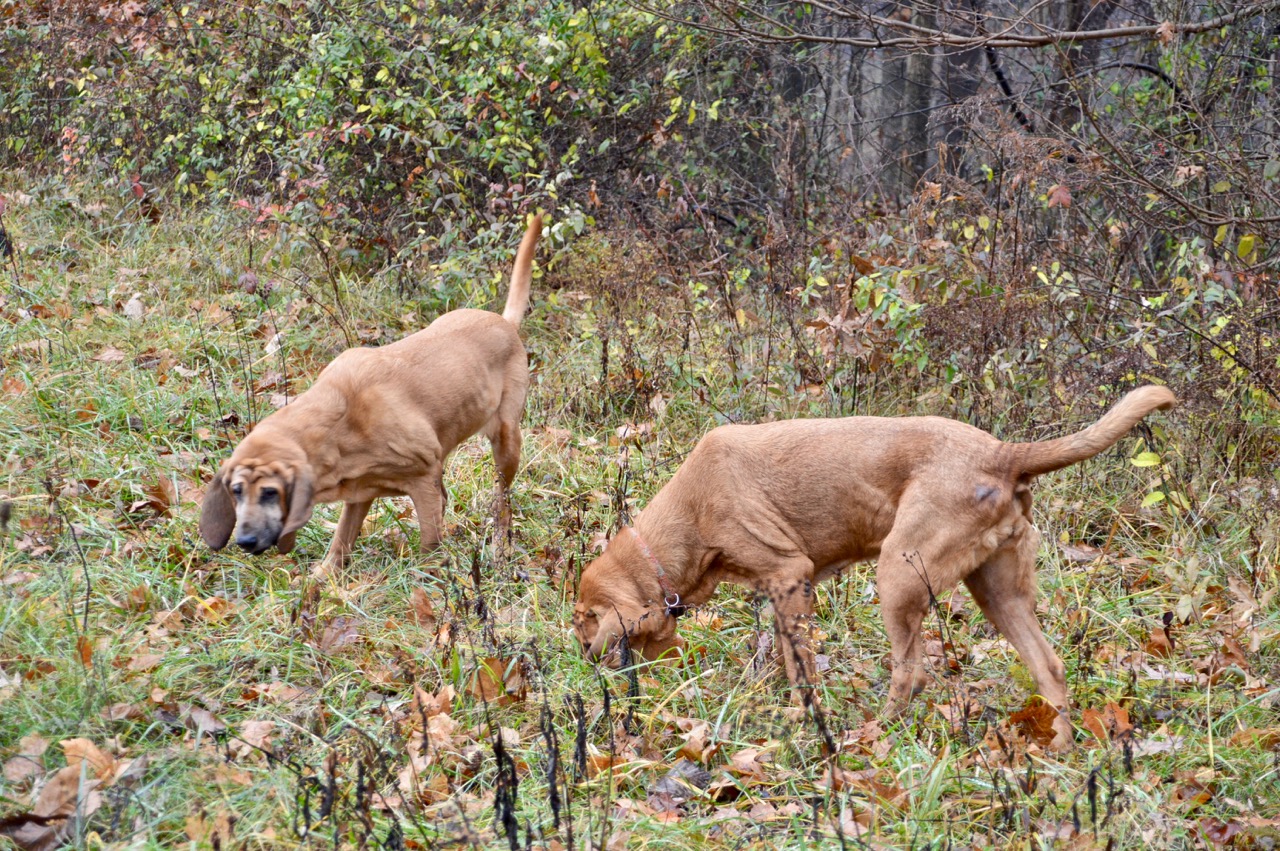 I heard Stella snorting while her nose inspected the fresh scents. 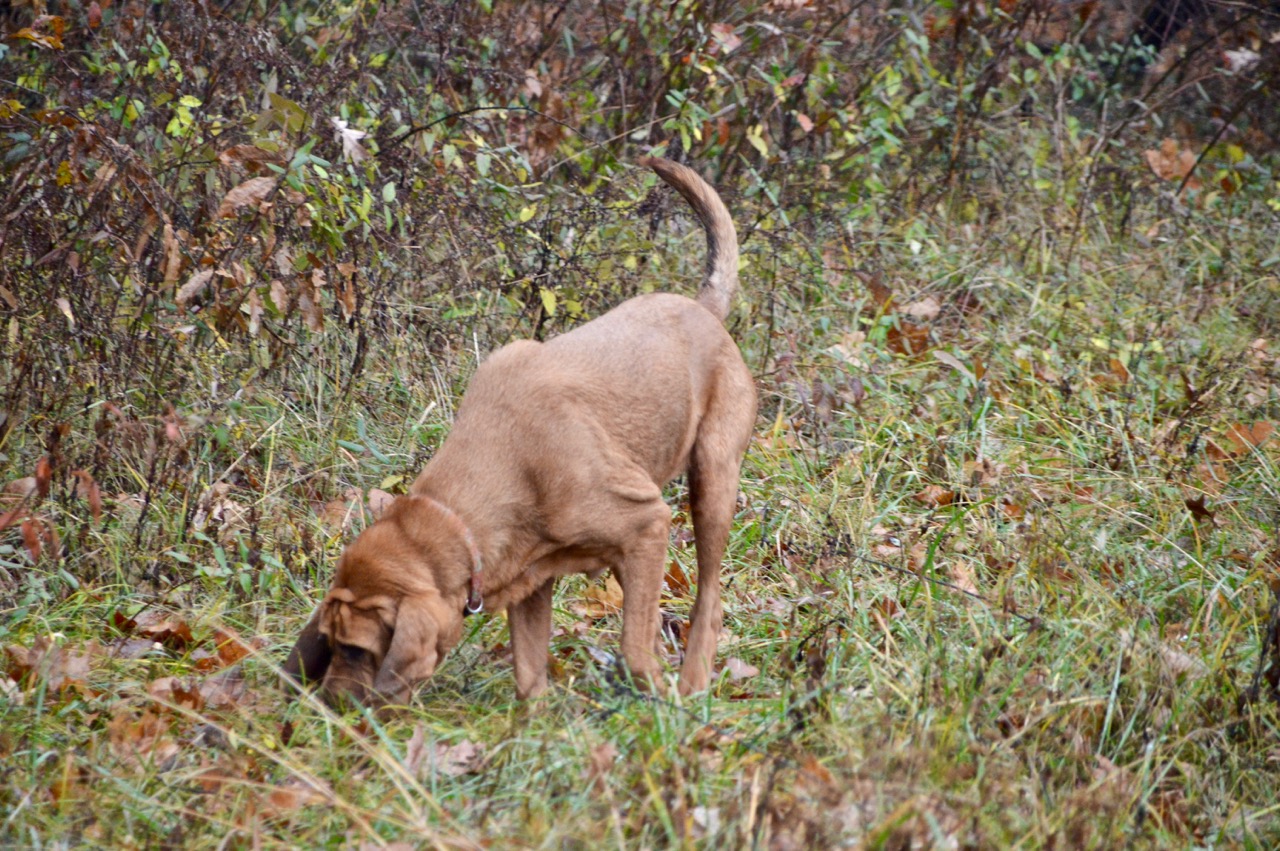 Still a little color from the fall hanging around. 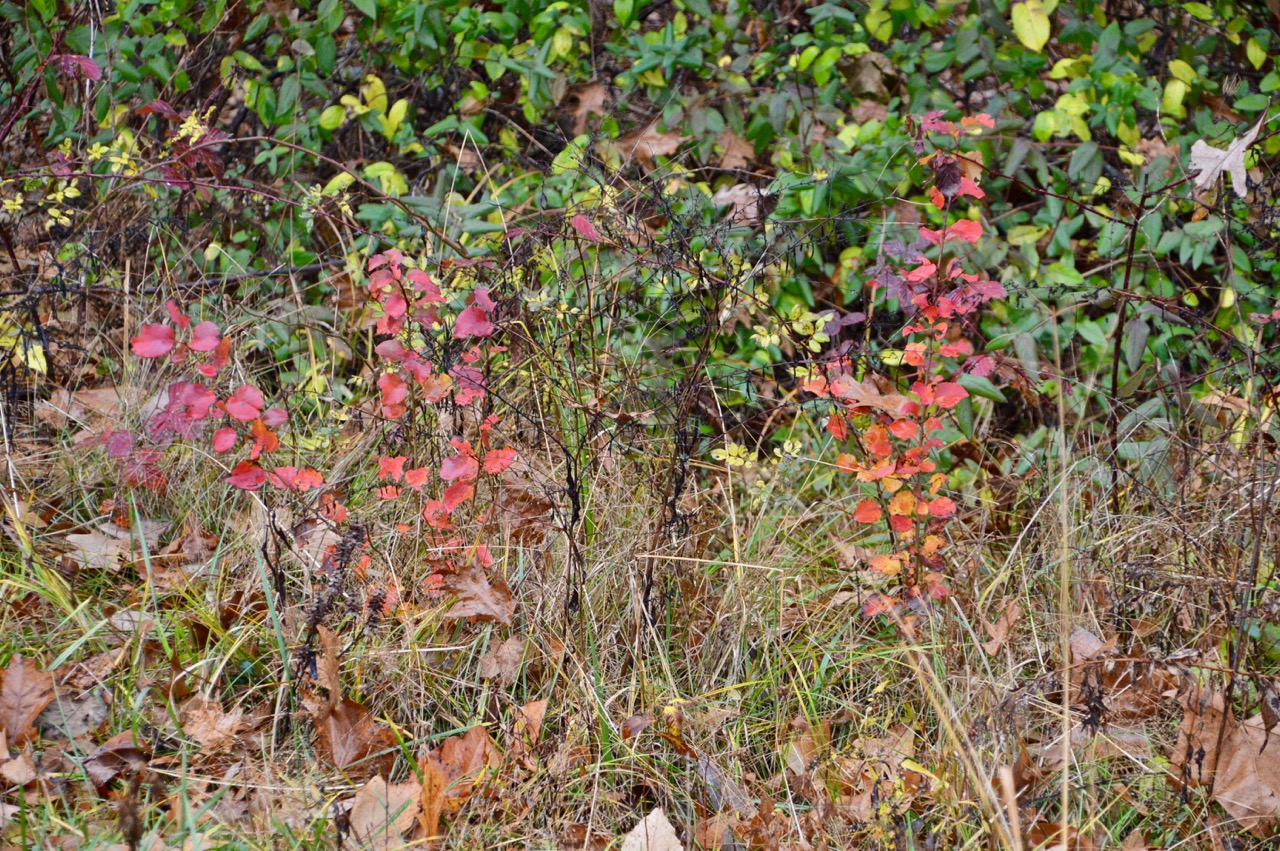 With me taking pictures and obviously not walking fast enough for Sadie, she had other plans and the scent she was on was all she was focused on. She sprinted around the corner with her nose to the ground, running out of sight. 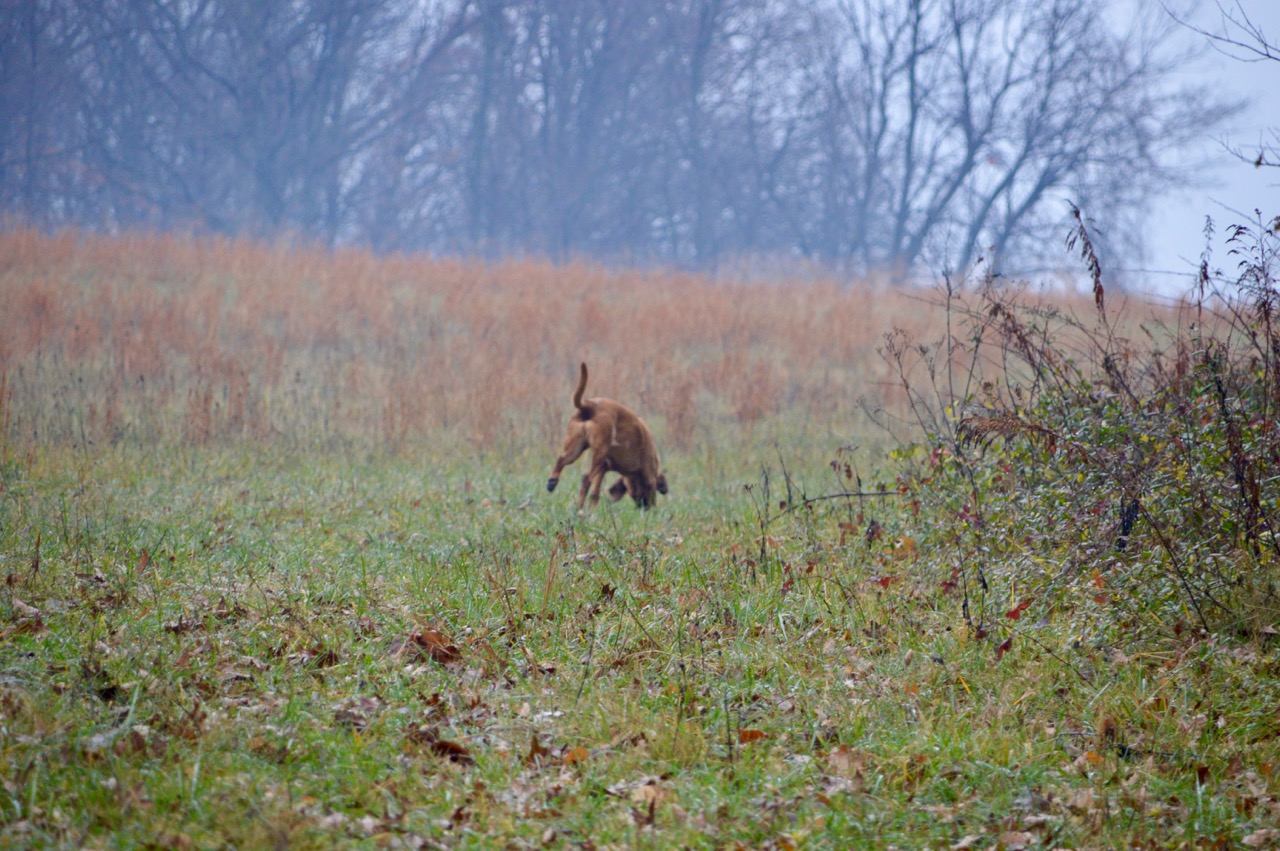 I called Stella's name loudly to see if she would come running and join us ... LOL ... what do you think of her response? the picture after this one was taken within seconds of her looking at me. 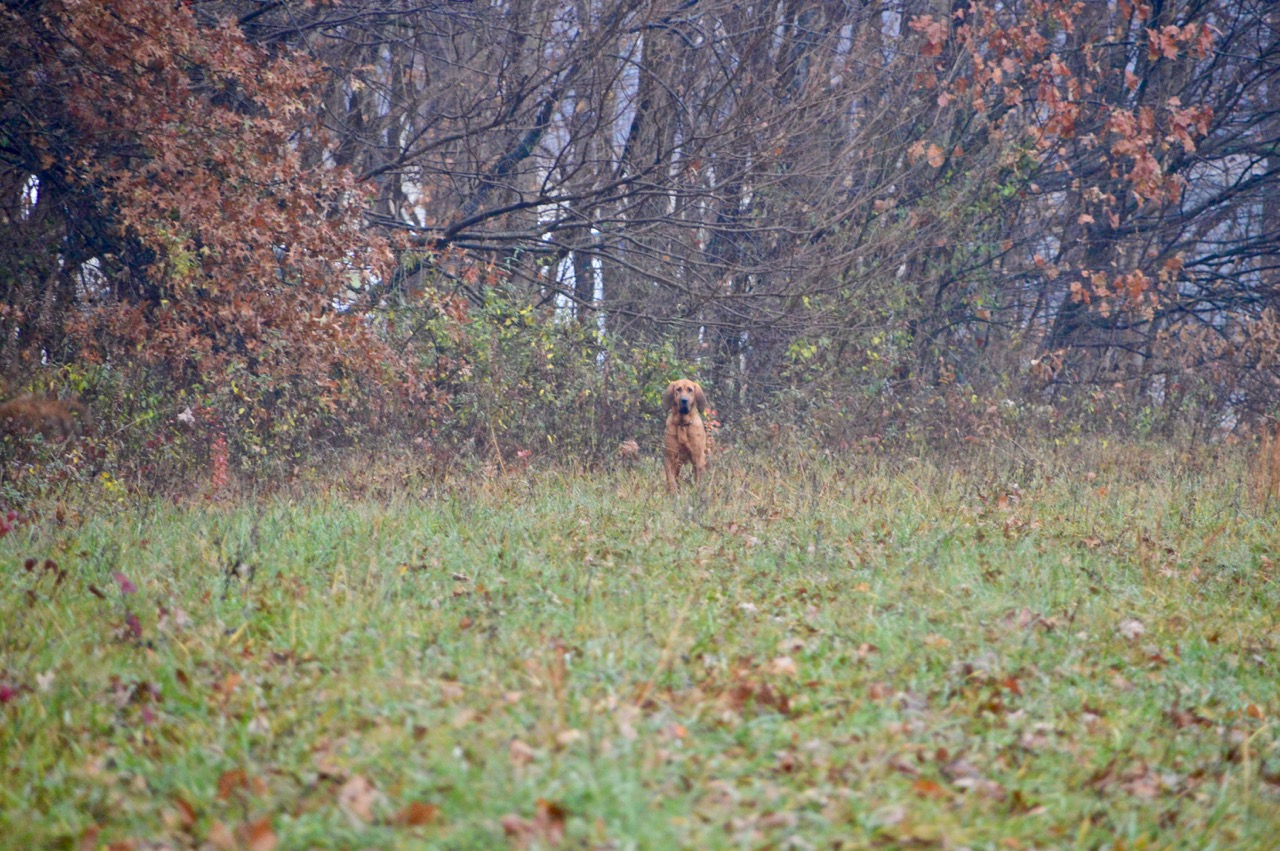 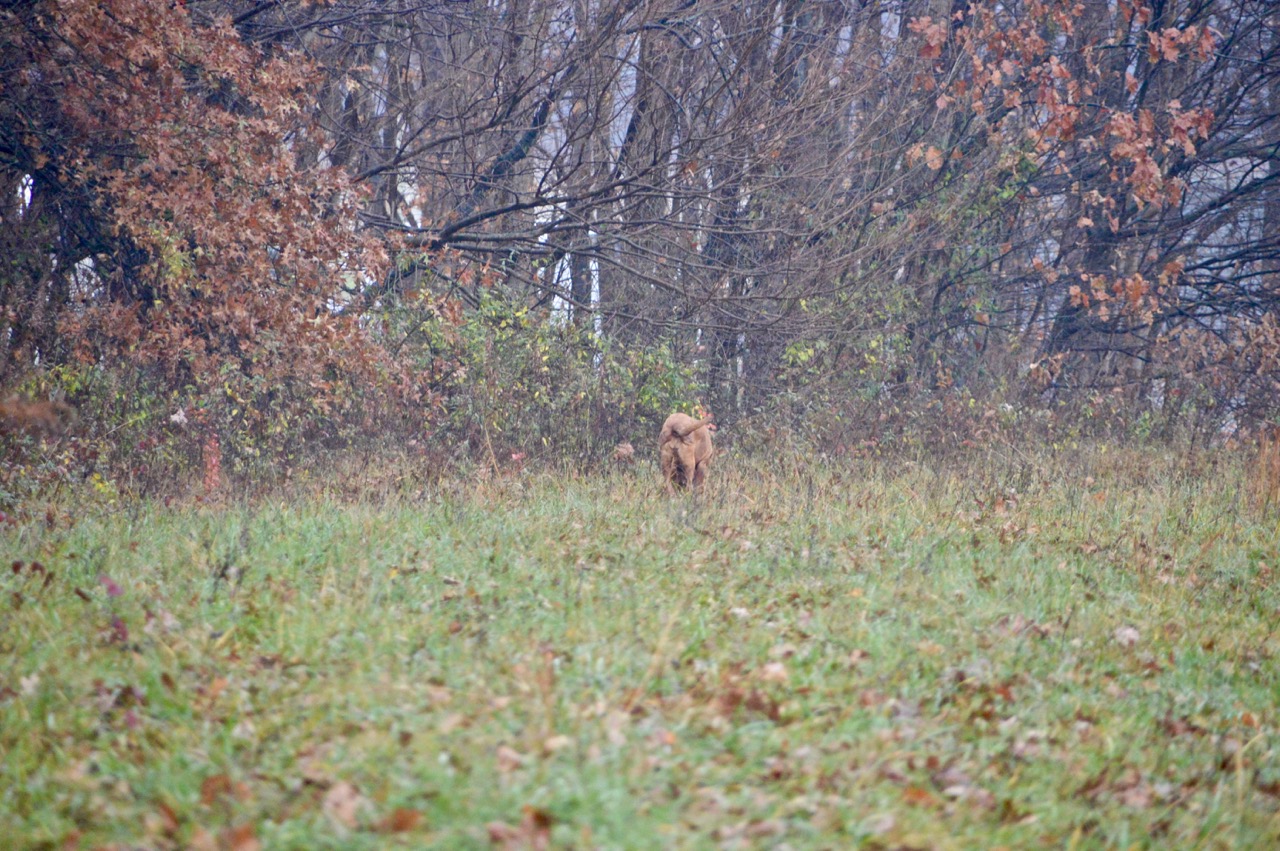 That's fine, Sadie and I could continue on ... these seems to be the norm anymore for our 1st walks of the day. In the afternoon walks Stella is right there beside me without any words spoken, even during the times I don't have her on the 25' retractable leash. 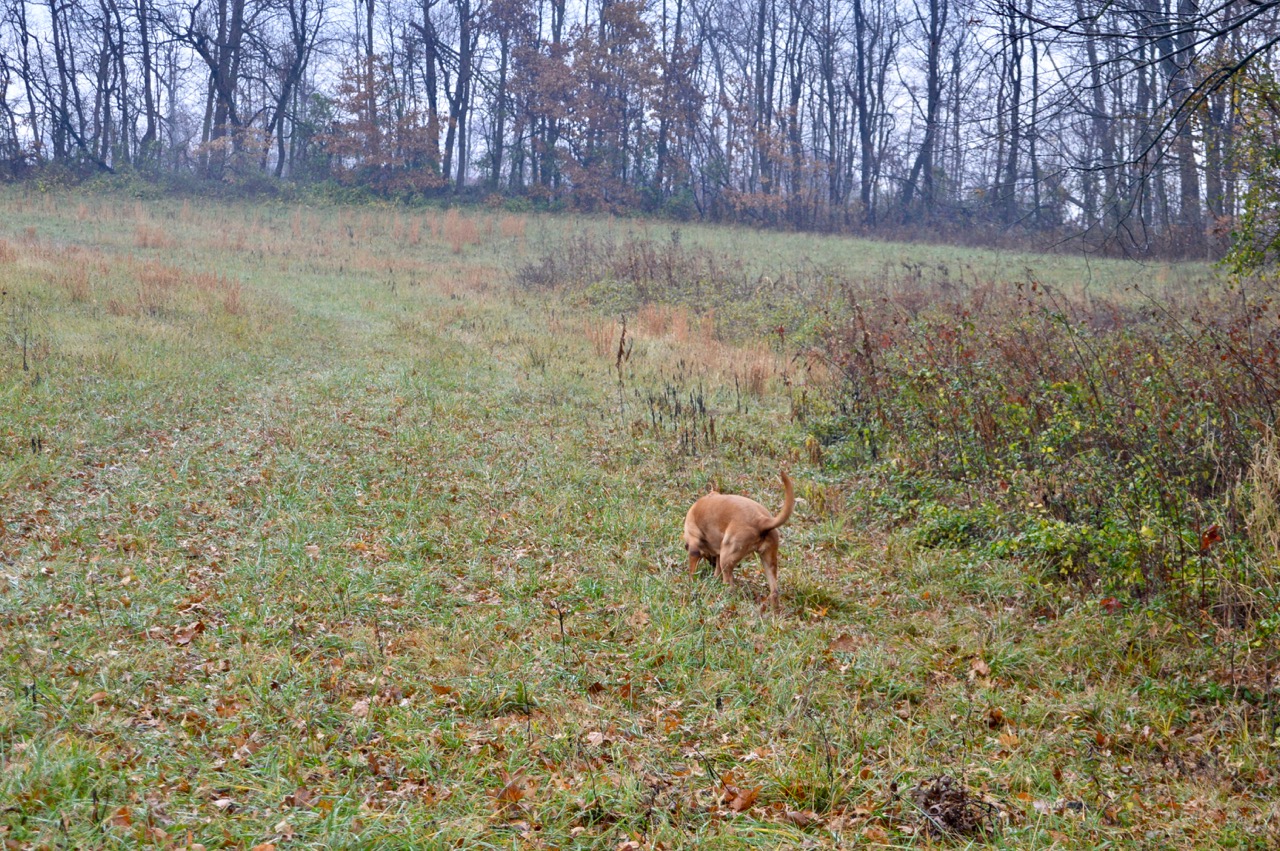 I am assuming these are very very young tree saplings? Am I right? 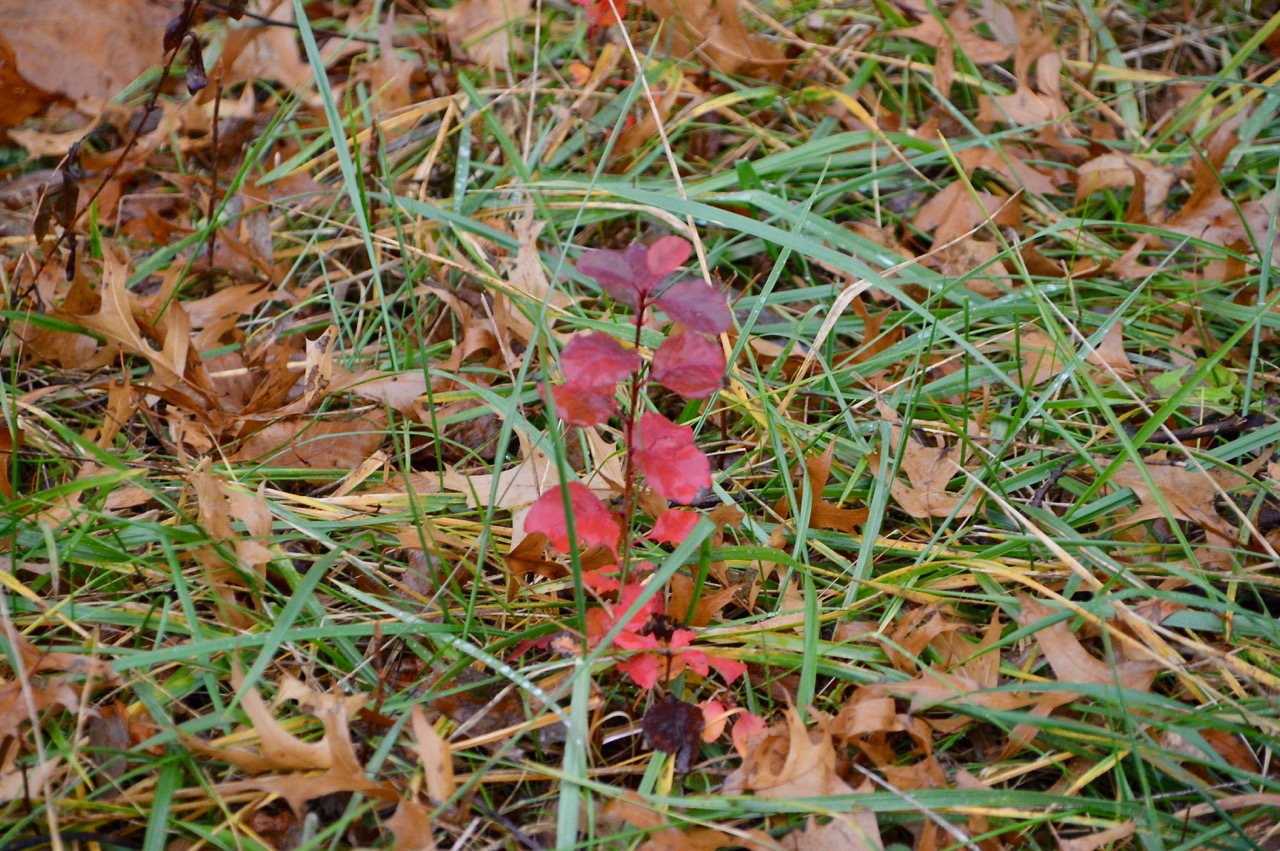 I mentioned the other day, maybe yesterday's post that I had moved all of my spreadsheets back to Excel. They say that memory is the first to go as you get older and that proved to be true numerous times yesterday. While I was looking for a solution to my other macOS problem that was self induced, I was reminded why I moved all those spreadsheets to Numbers in the first place a month or two ago. 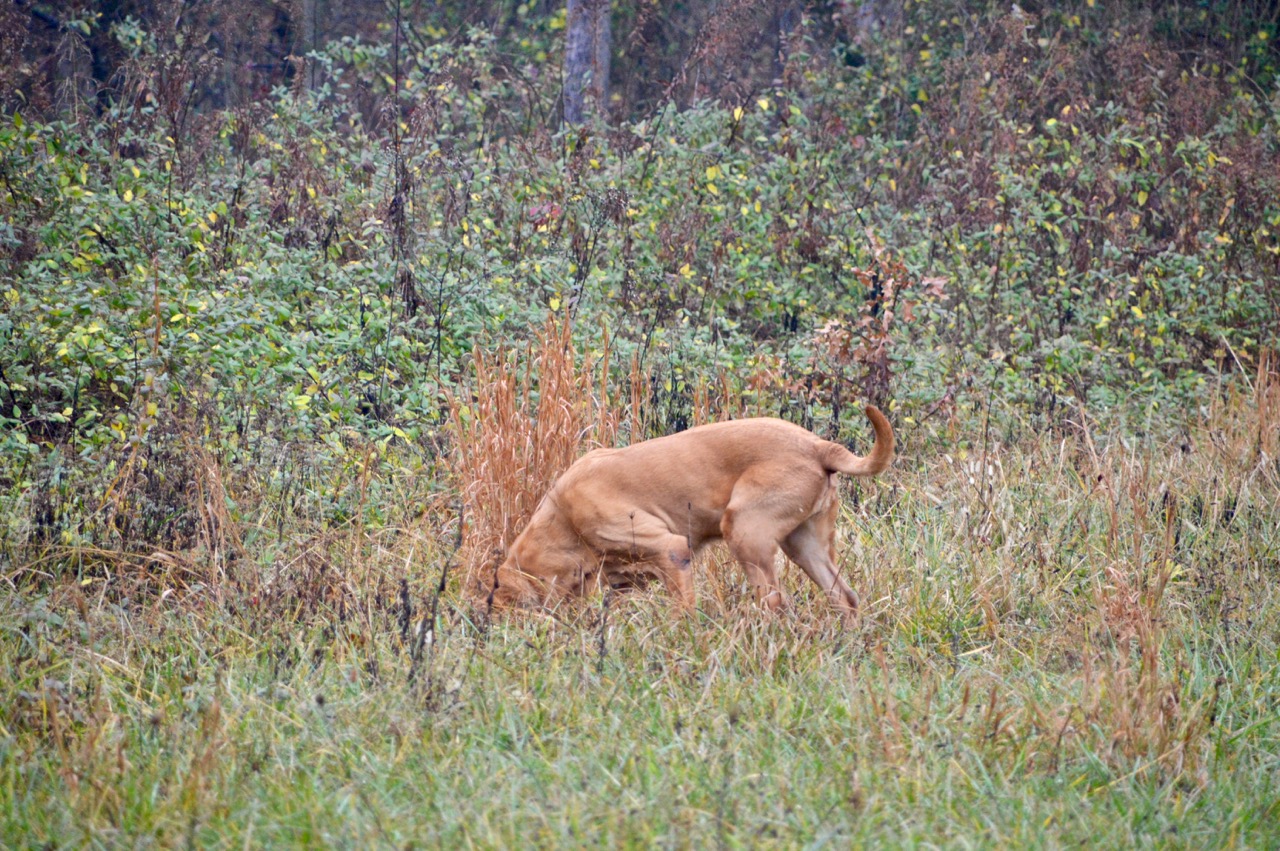 I have Microsoft Office for Mac 2011. Since I really only use Excel in that program and really just design basic spreadsheets for my personal use I have no reason to spend $150 for their 2016 version. Especially when Apple Numbers gives me what I need and the only problem is I have not learned all the ways to do things differently compared to Excel.

It will take me less than an hour to study what I am having a problem with and once that is figured out, then Numbers will be perfect for what I want. The reason I switched a month or so ago, is the new Apple macOS is not going to support the older 2011 version of Microsoft Windows. In fact Microsoft no longer supports it and updates will not be sent to that version.

Currently my spreadsheets are working but I didn't want to take the chance to lose them due to macOS finally realizing that I was still using 2011 version of Office and then not give me the ability to open them. That has already happened to many users.

So I changed all of them back to Apple Numbers late last night (early this morning) in a very short period of time. 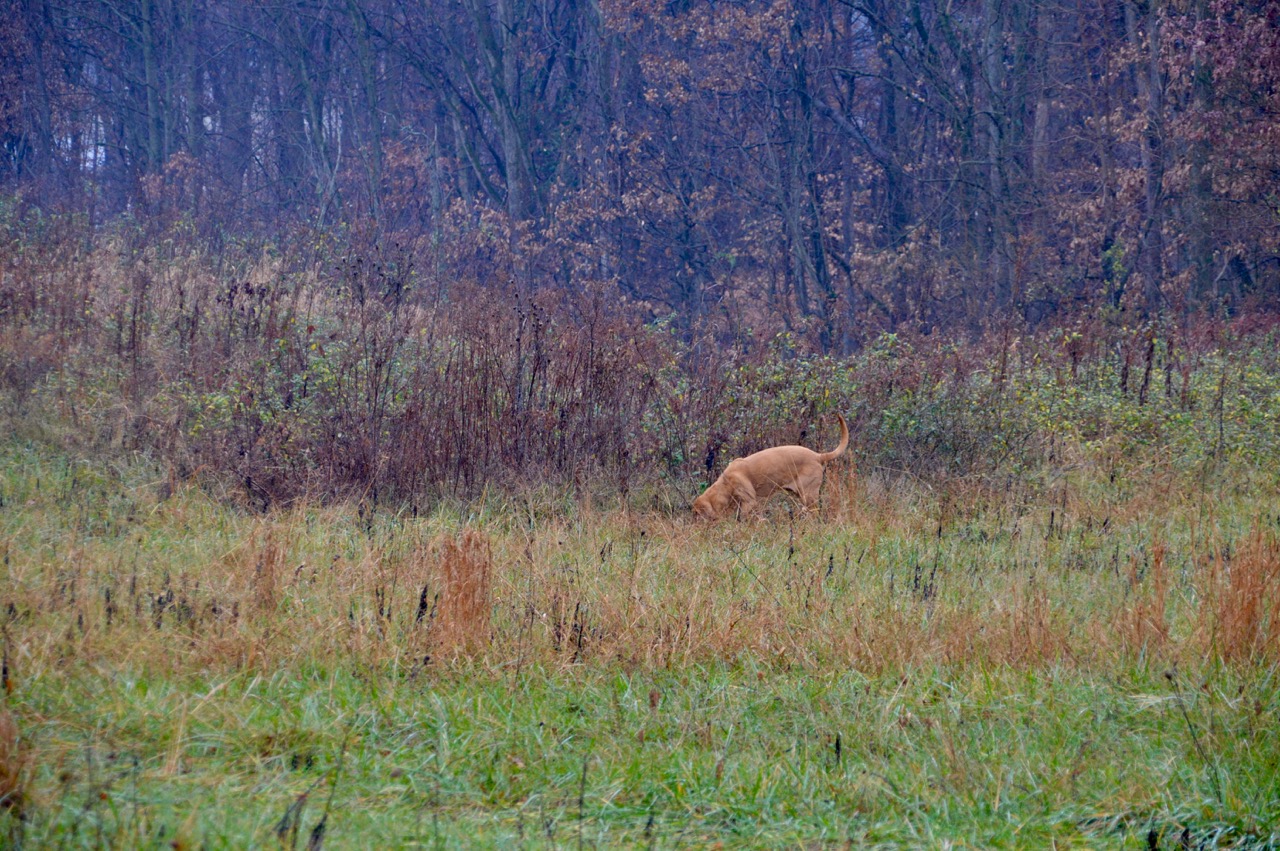 The biggest 'senior moment' came yesterday afternoon where for some strange unknown reason ... I decided to leave the Apple Beta Program and download the latest public release of macOS High Sierra over the top of a more current version in the Beta Program.

No big deal. After a couple of hours it took to download and install my computer worked perfectly without a hitch ... and still does. EXCEPT I forgot something very important .... My 330Gb file called "photos.library" would not load with the new public release of the macOS High Sierra because the Beta version is always going to be a newer version.

My only choice was to start a new file for my photos. That is also not a problem. I know a few people that have different photo library files on their computer they work with daily, but in my case until the macOS is updated in a few months I have no way to access those 100,000's of photos on my computer, except to copy that file to my external drive and plug that external drive into my laptop which is still running the beta version of the operating system. 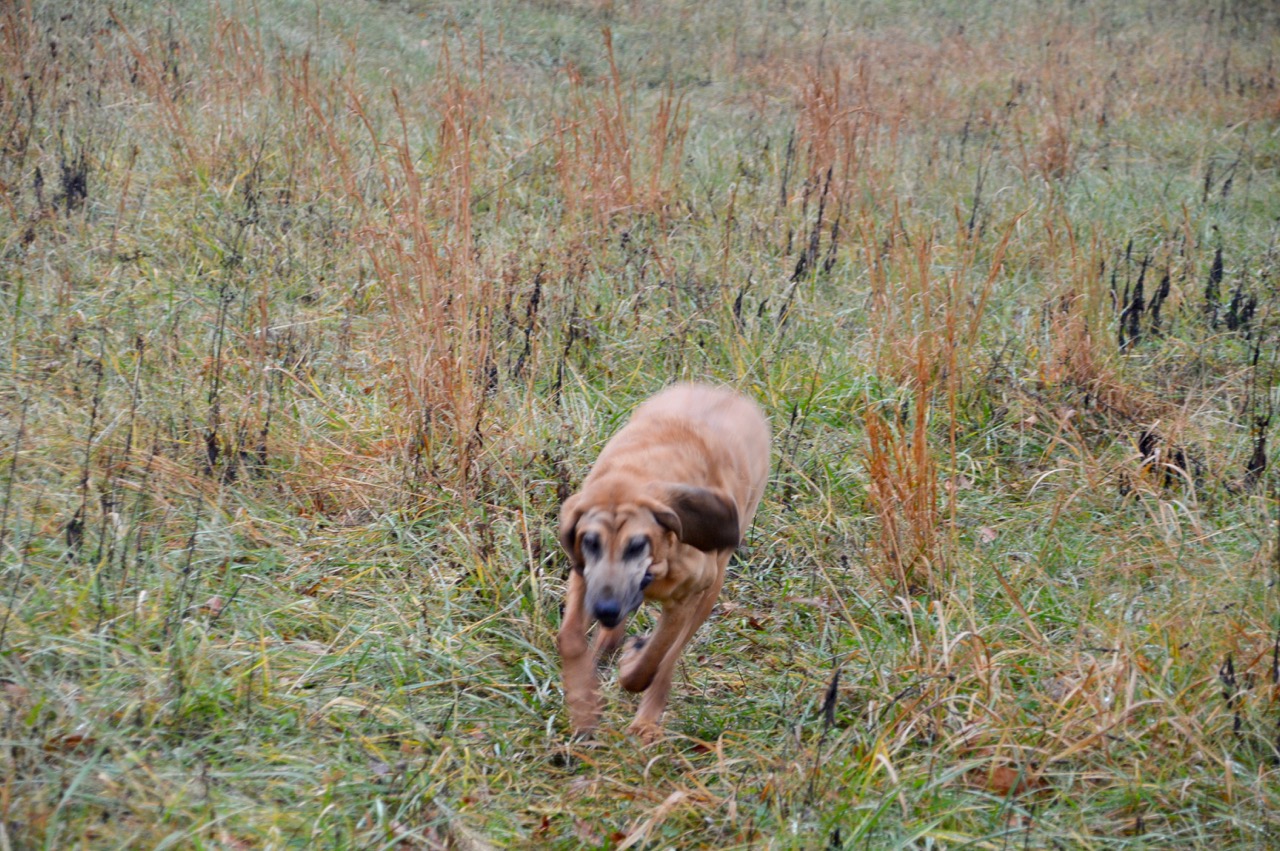 I wasn't in a panic. I haven't lost those photos. The file is still there and is also backed up. I also have all them backed up online in Flickr, a free TB of storage in original file size. So I joined the Beta Program again with a few taps on my mouse pad but didn't get the screen to re-download the beta version of the macOS.

I dug around online and found a different way to get that page of download links. An hour and half later when the file had been downloaded, it stopped before it installed the program. It didn't show up anywhere in my files. So back to the mac forum to see what to do. Others had similar problems. 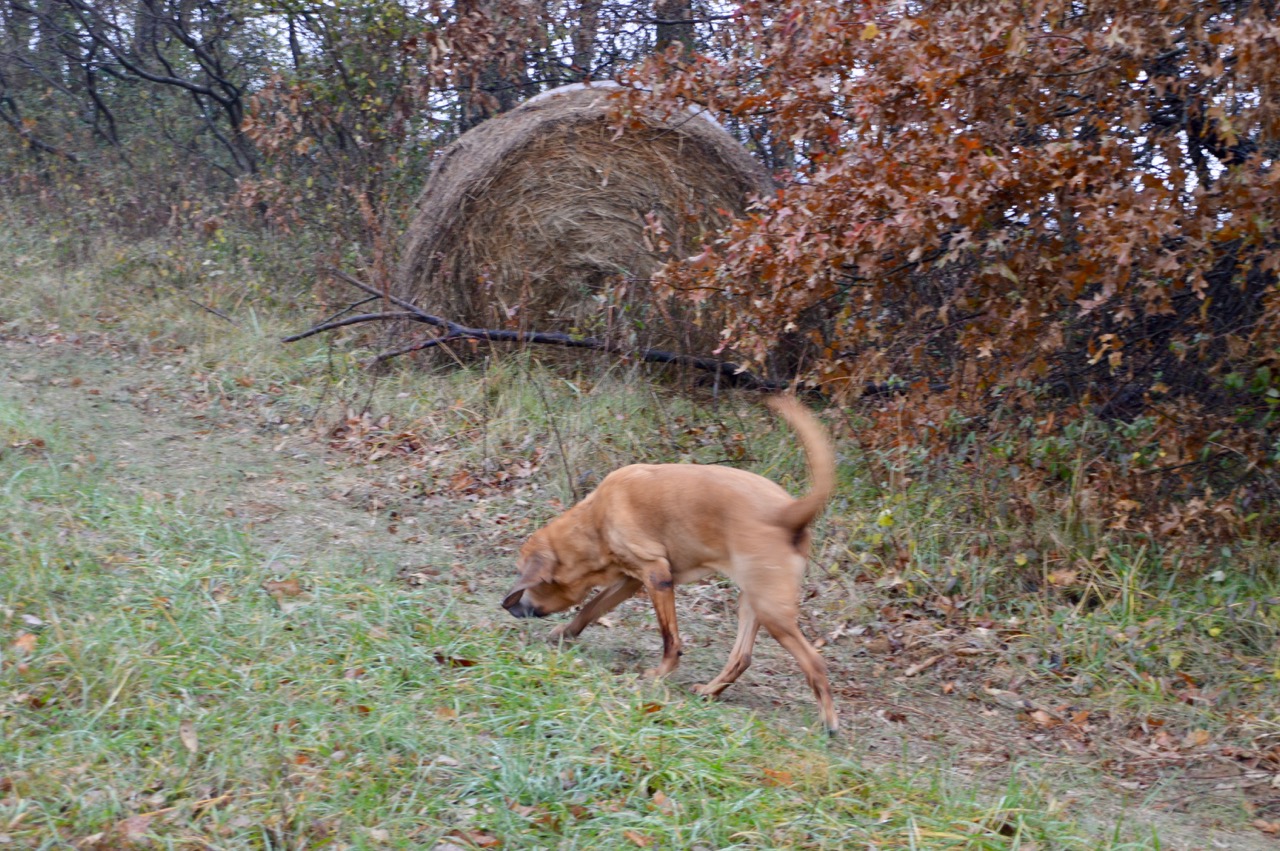 So the rain has come at the right time. I really do enjoy solving computer problems like this and will spend this morning looking for more ways to fix my problem. Once I can get the Beta version of the operating system installed, my large photo file will be available again.

In the meantime as a temporary fix ... I'll continue to operate as normal on the public released operating system and keep adding photos to my 'new' photos library file ... then import from that file later on when my large file is available again. 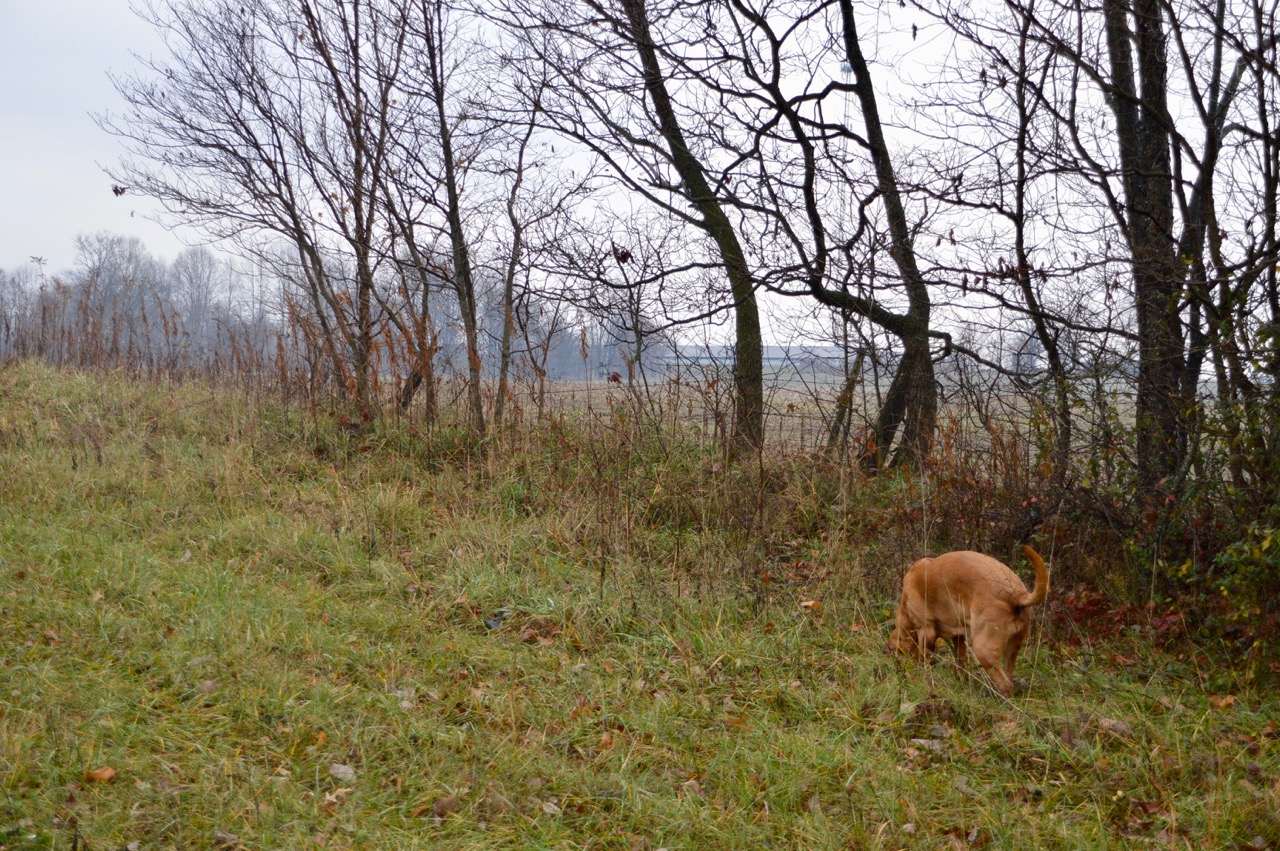 Yet, those two examples with the photo mix up and forgetting about why I moved my spreadsheets shows that as you get older you have to be on your toes when it comes to making decisions on a computer. Memory, memory, memory. 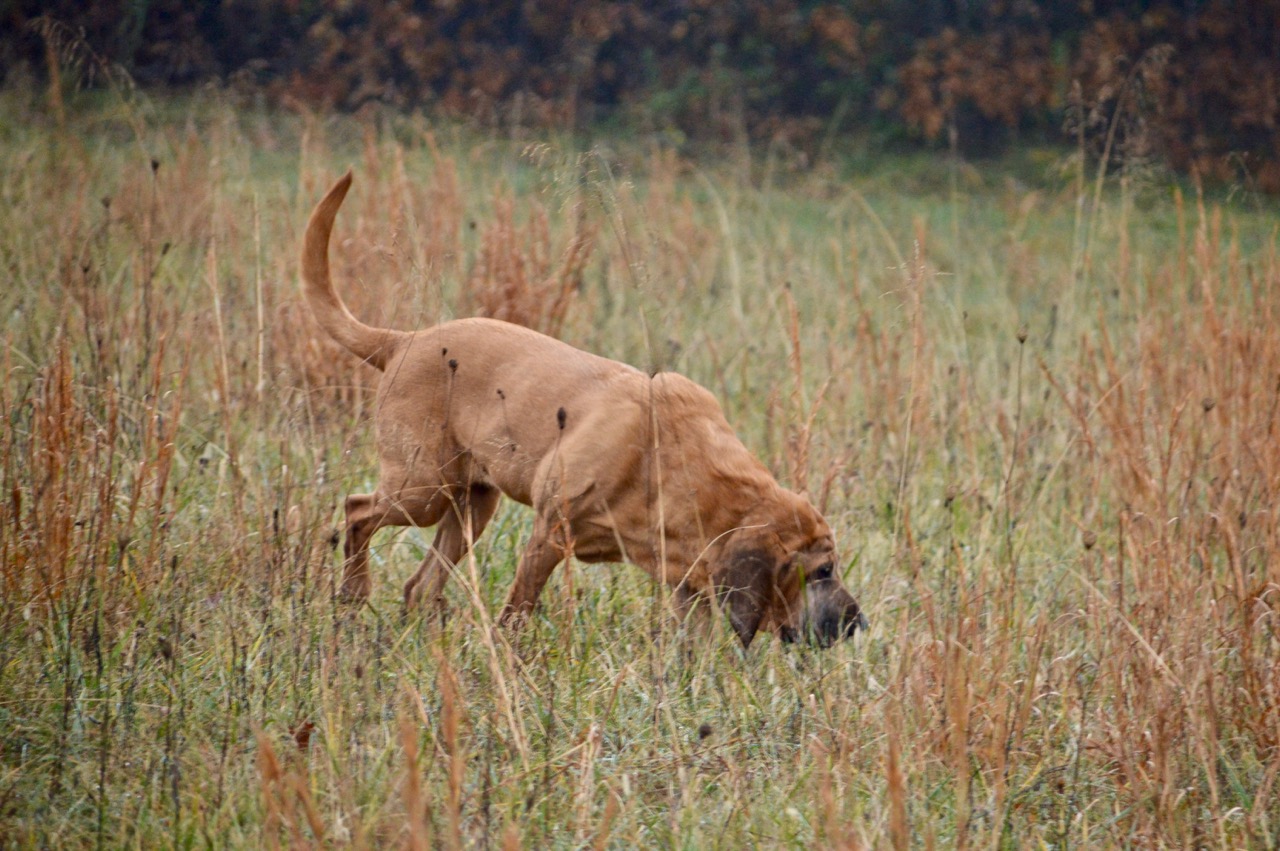 An online friend that reads the blog sent me something to check out for my slow Safari problem. Once I went into preferences and unchecked the Apple Pay box ... Safari was back to being faster than fast (thank you Mary) ... thus it is back to being my default browser. It does not let Facebook, Twitter, and all my Sports sites to play their videos automatically. I like videos but I want to be the one to decide what I want to watch not the computer gods. 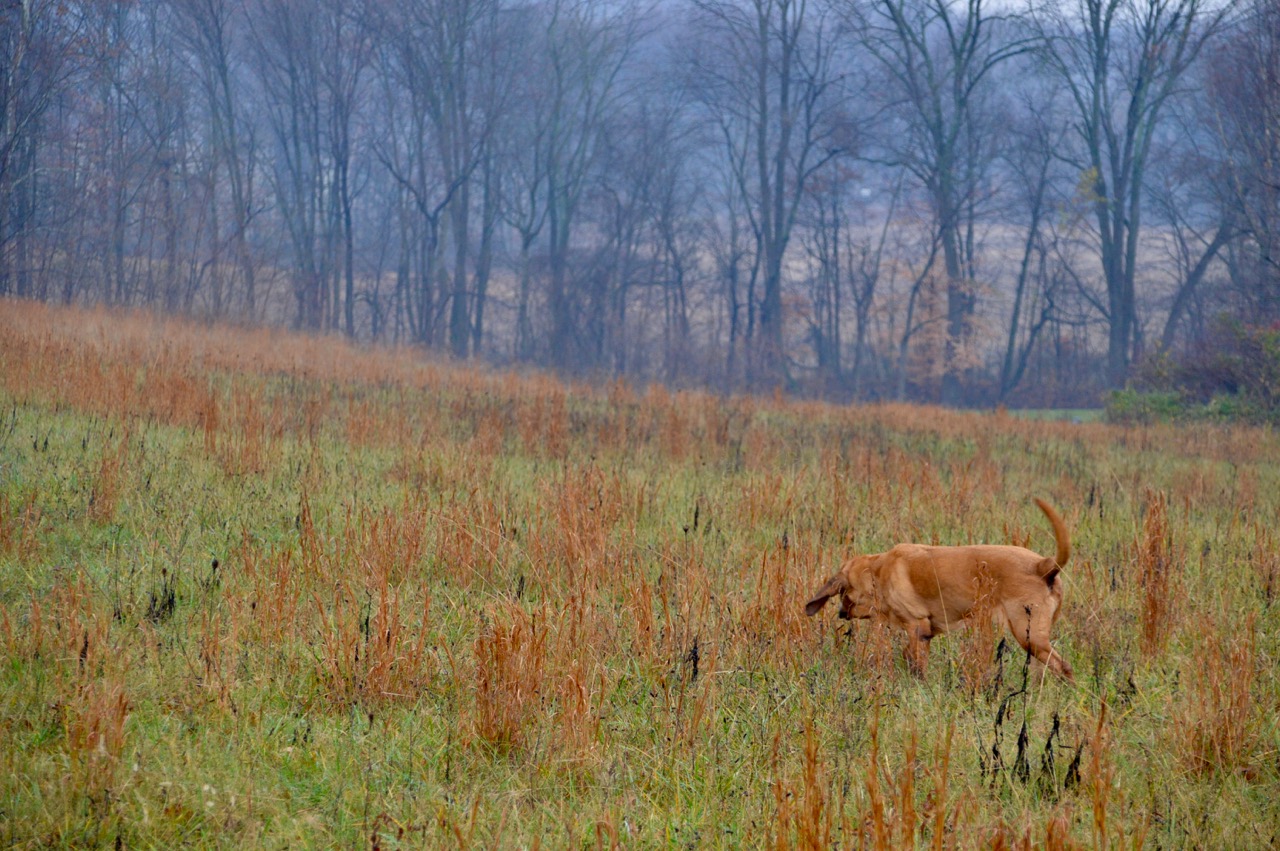 Once again this morning I told Sadie to "go find Stella" ... she ran right to her, directly in front of us. Needless to say, Stella didn't get in her large number of steps in this morning but she doesn't count them and does not wear a Garmin watch or FitBit to track them. She is just Stella ... in her own little world ... that likes to sleep behind my computer desk chair as I type blog posts everyday. 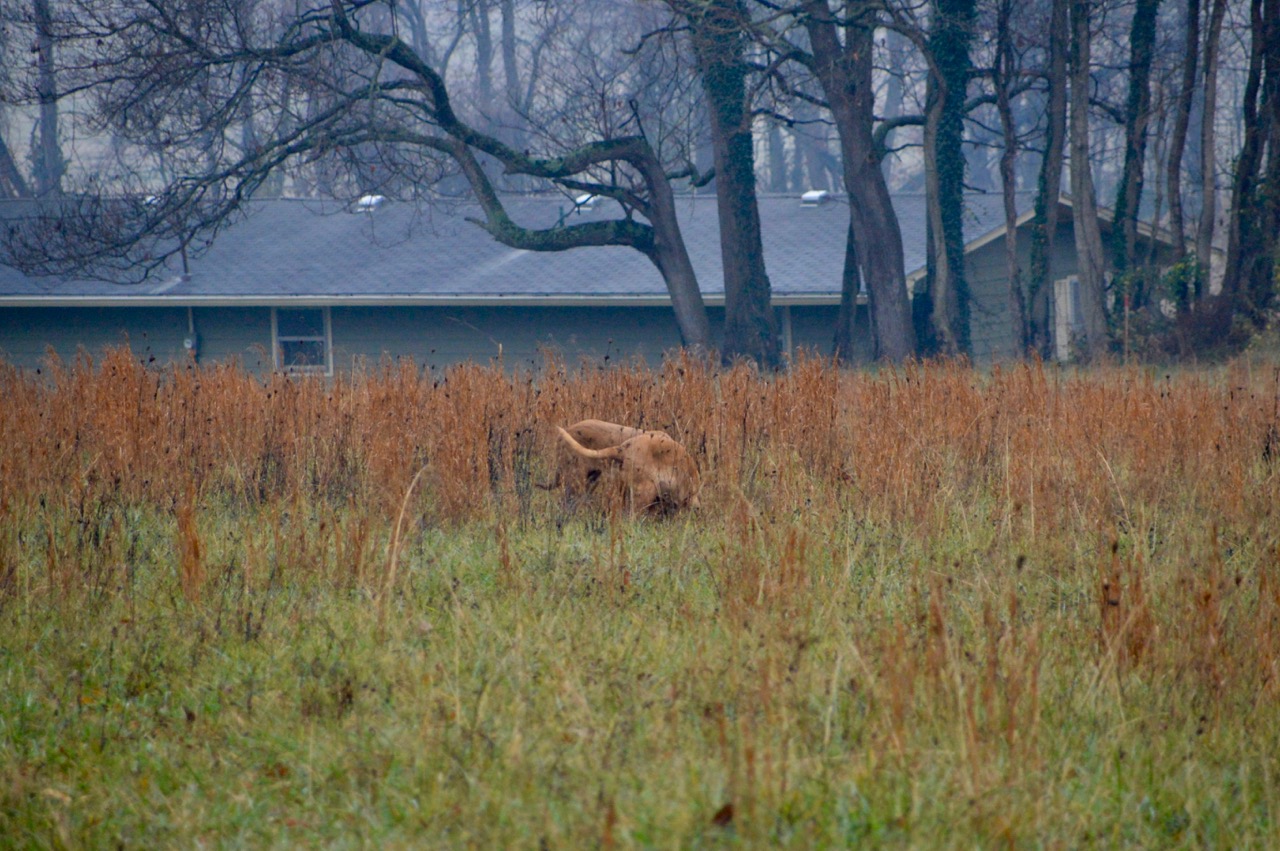 We were almost finished with the walk when I thought I heard drops of rain hitting my light rain jacket. It was light enough that I really couldn't tell but it was good that I convinced Stella to at least head our direction with Sadie and I. 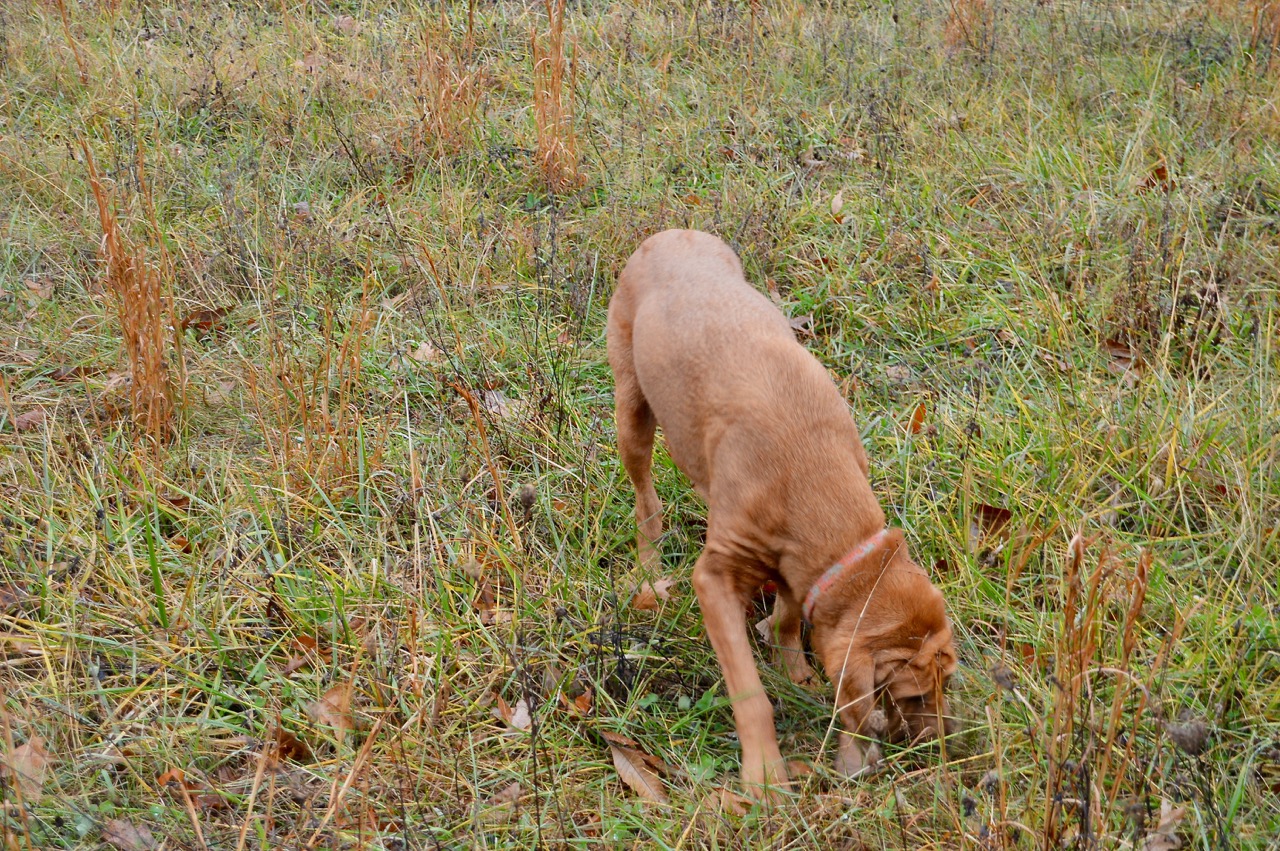 She acted busy and ignored me of course until that rain became a sprinkle ... that moved her from head down in the tall grass to a slow paced walk. I wasn't going to wait any longer because it was starting to rain harder ... so I ran to the house with the camera facing down in my hand and Sadie running right beside me. 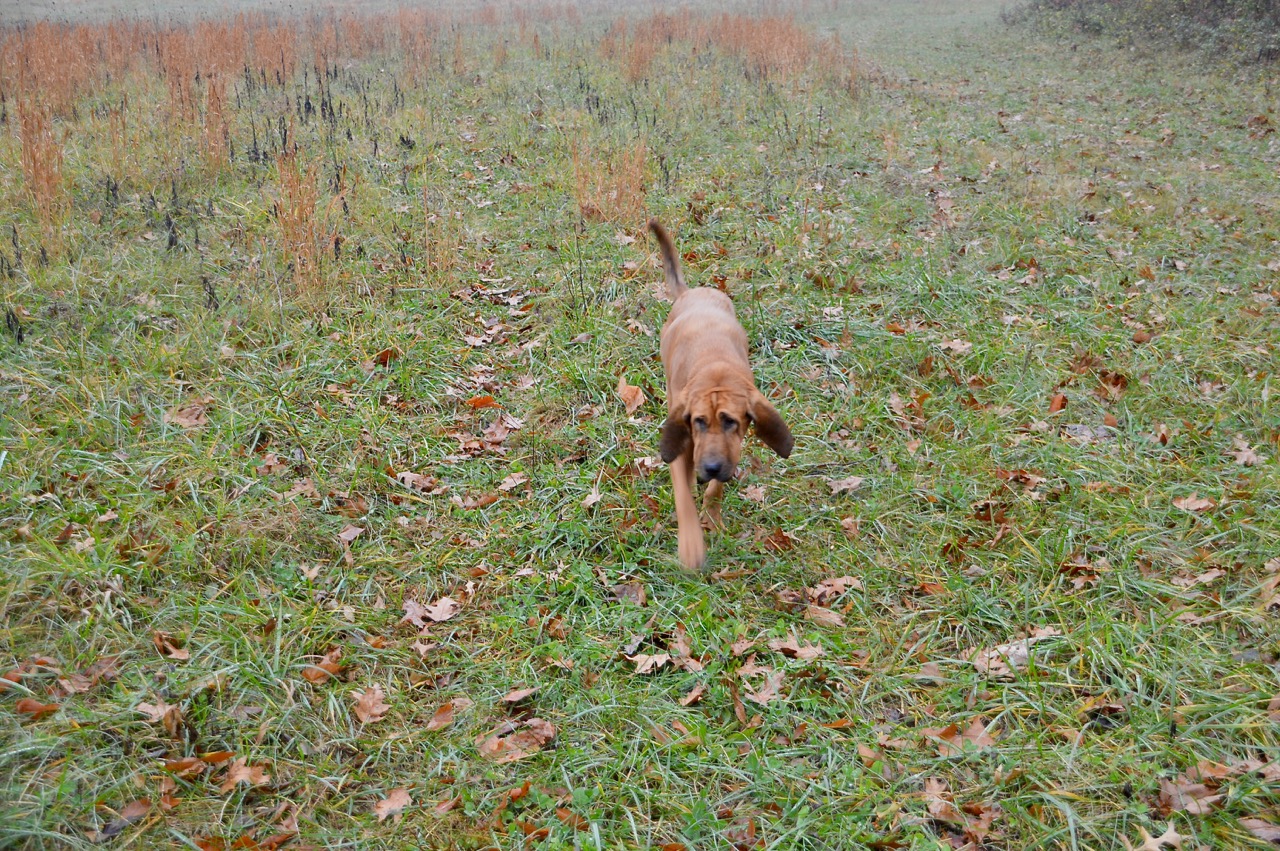 By the time we got to the carport Stella had decided it was raining harder and she never likes to be in the rain ... she picked up her speed to somewhere between a fast trot and a slow run. But that's just Stella ... one of the most hilarious personalities in a hound that I have had in 30 years. There isn't a day she doesn't have me laughing about something. 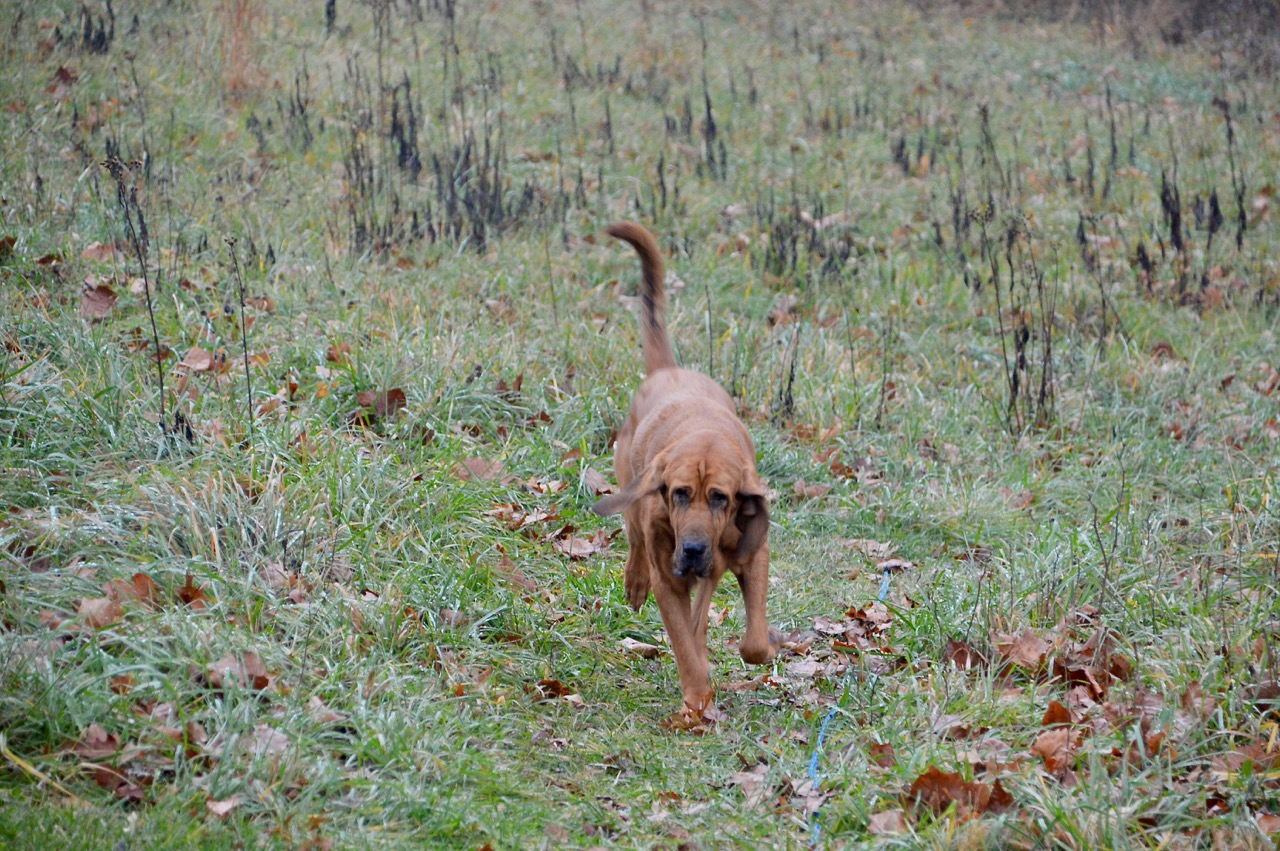 With her sprinter speed, she brushed by me hitting the side of my knee as she ran to the door with plans to get inside before Sadie did. Everything is competitive between those two. 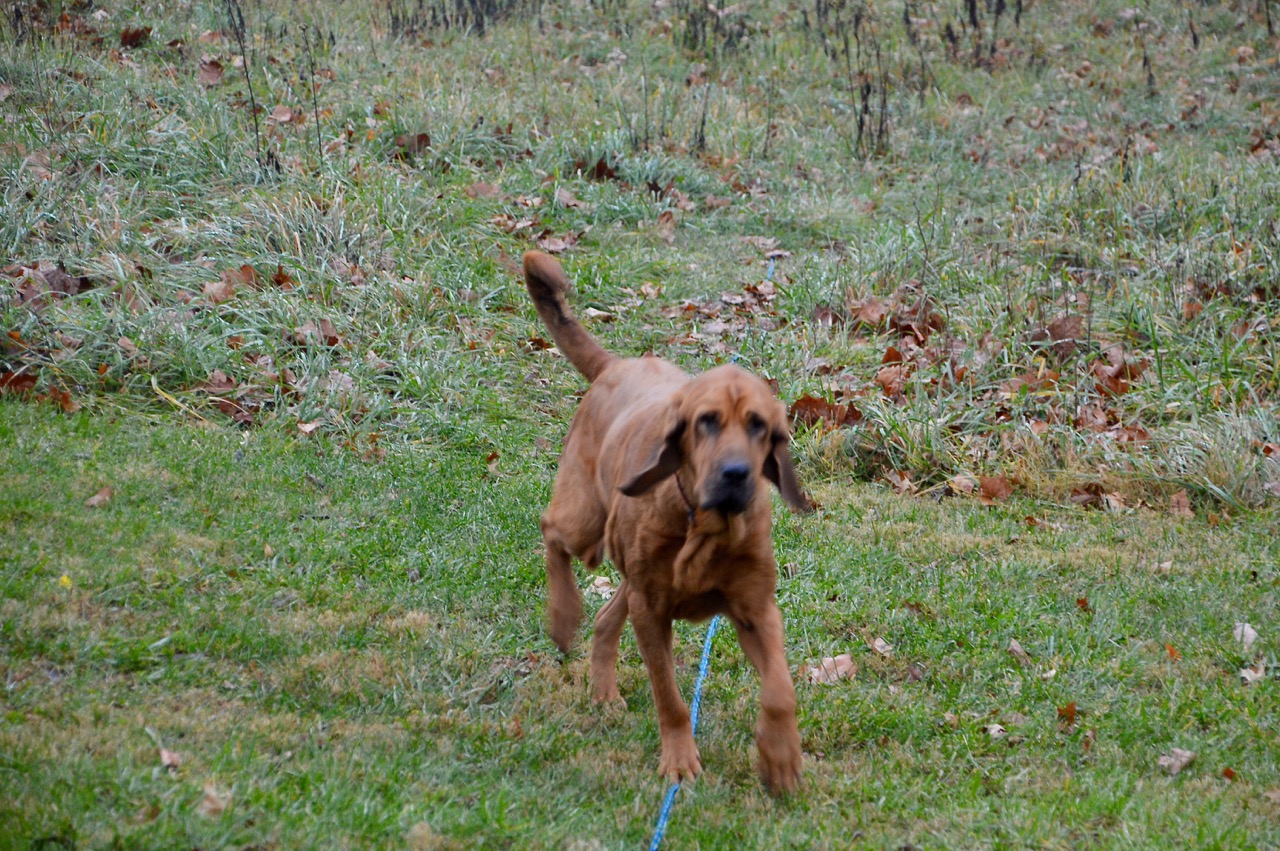 The rain sounded harder then it shows on my cap. You don't see many ball caps that say Sacramento State Hornets back here in 'the tropics' of Southern Indiana. 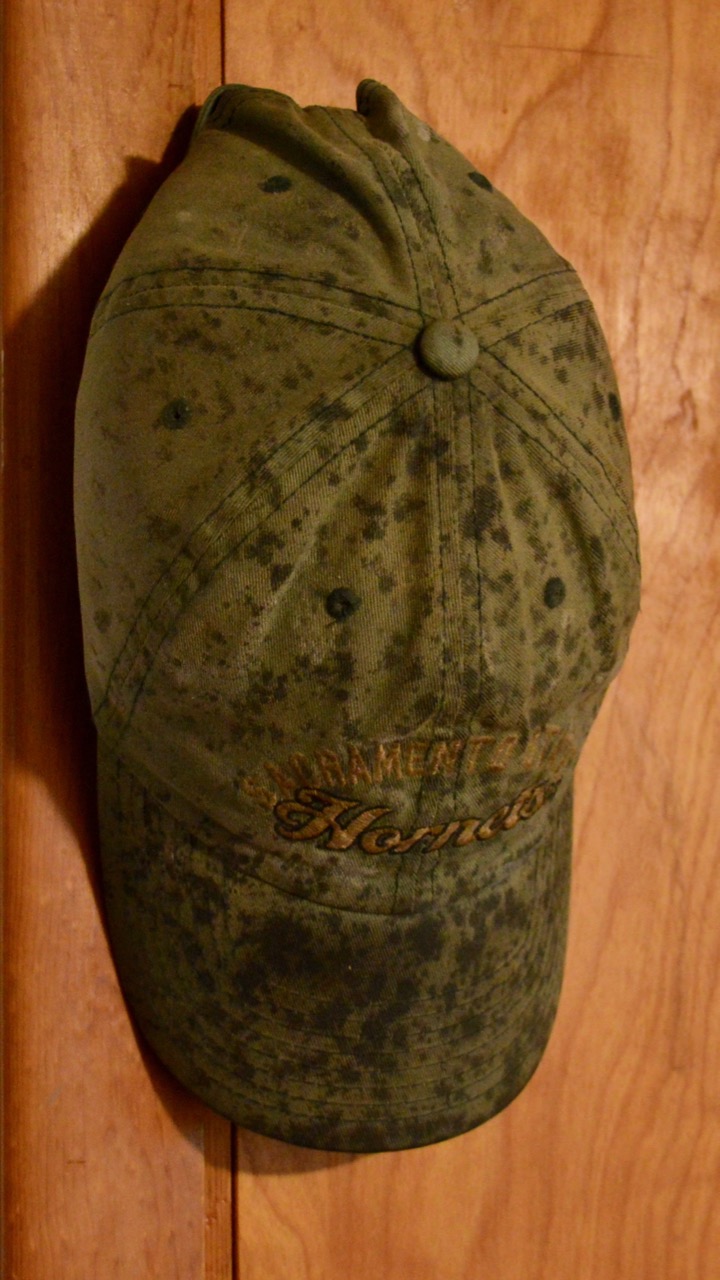 So a little rain, some online research to fix my self induced computer problem and ..... my interest has been tweaked into looking more into the specs of those new iPhones ... Verizon told me yesterday that I could get a new phone and get paid $197 for my 6s after trading it in for the upgraded phone. I don't need one but why not ... ???  LOL

It's still a nice day here in 'the tropics' of Southern Indiana even with a little precipitation.
at November 30, 2017