Severe Weather Is Headed Our Way 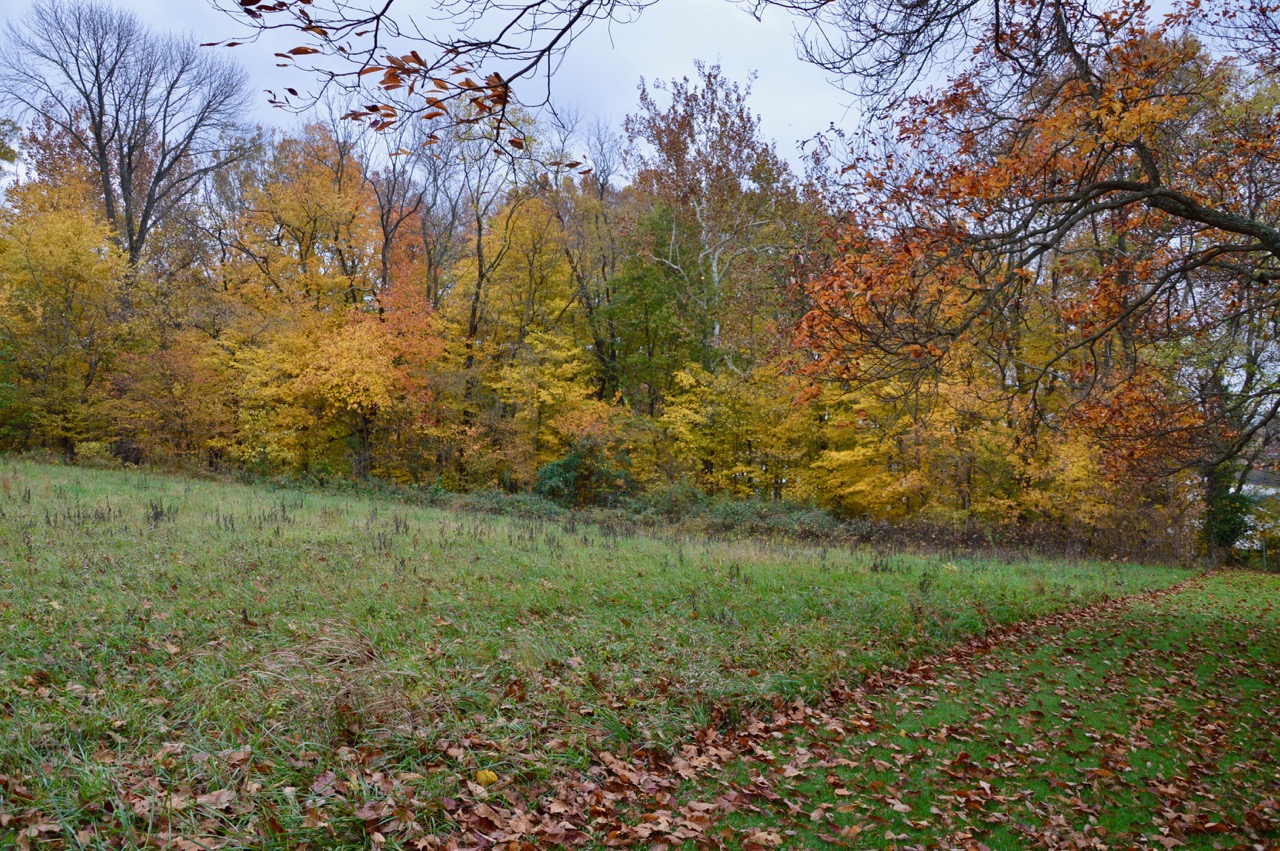 As I sit here this morning the windows are open with it a degree below 70°. Strong winds are blowing from the southwest (normal direction) and I can hear wet pavement from the cars passing by on the highway. The traffic noise has never bothered me but it probably would for those of you that live away from a busy highway. For some reason there is an 'eerie' feel to today. Severe storms are forecasted for later today and tonight.
With those strong winds coming from behind the photographer I am hoping all of these leaves blow away from the house and out of the yard. It has happened in the past but not a lot. I can dream I guess. The naturalist say to let the leaves lay where they are, don't rake them. One friend tells me to mulch them with the mower. My neighbor vacuums the leaves from his yard, towing it with his riding mower.
I like to rake them. It's not that I like the time it takes to rake but my muscles tell me the next day I had a pretty good workout. Plus the yard looks clean after they are all raked. I am hoping this storm tonight will blow a lot of the leaves off the trees, maybe all of them. 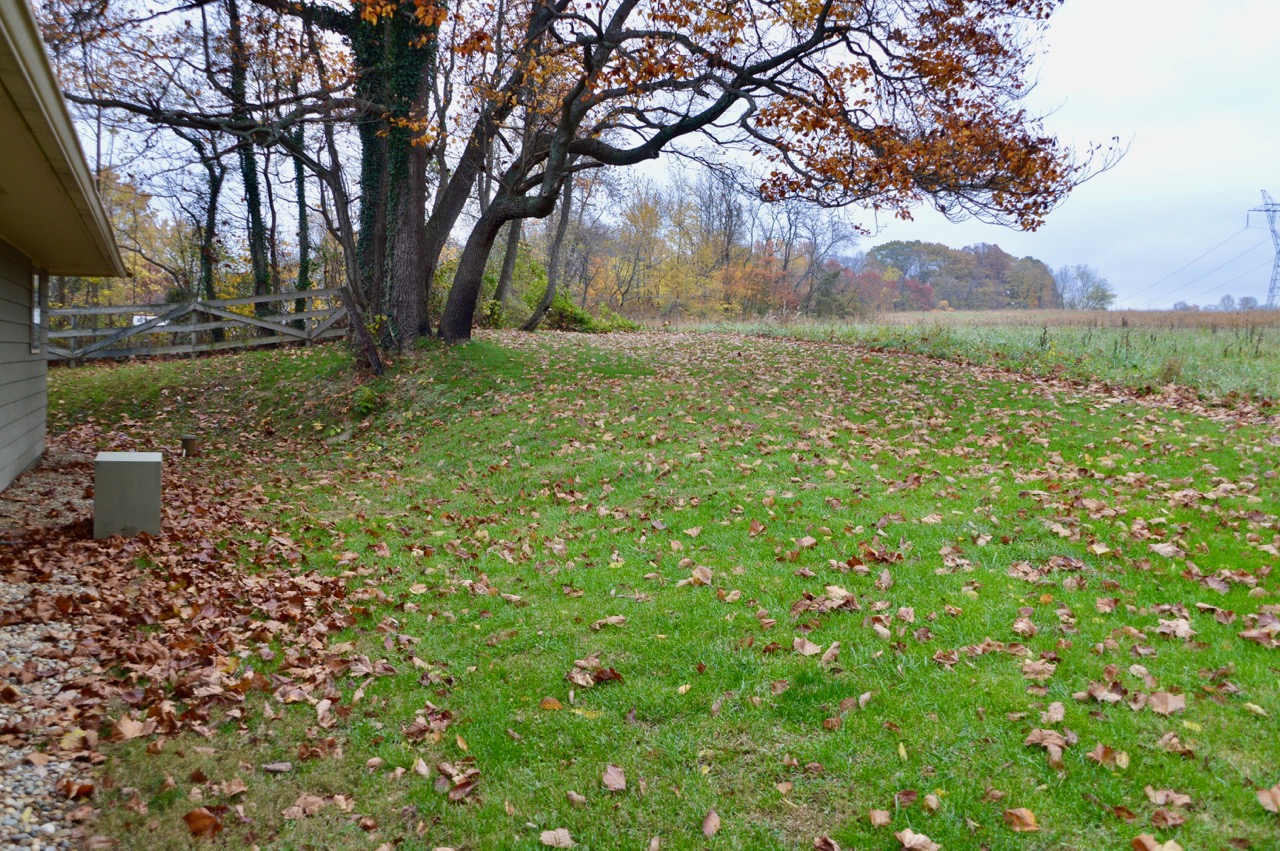 Stella came with a warning in August 2015. The previous owner told me she "freaks out during storms". I saw nothing that severe the first few storms we experienced together. After reassuring her that things were okay when those storms took place, she eventually got over her fear of them. Now, she will sleep through storms unless I have something to eat ... then she thinks I've brought out the food for her. 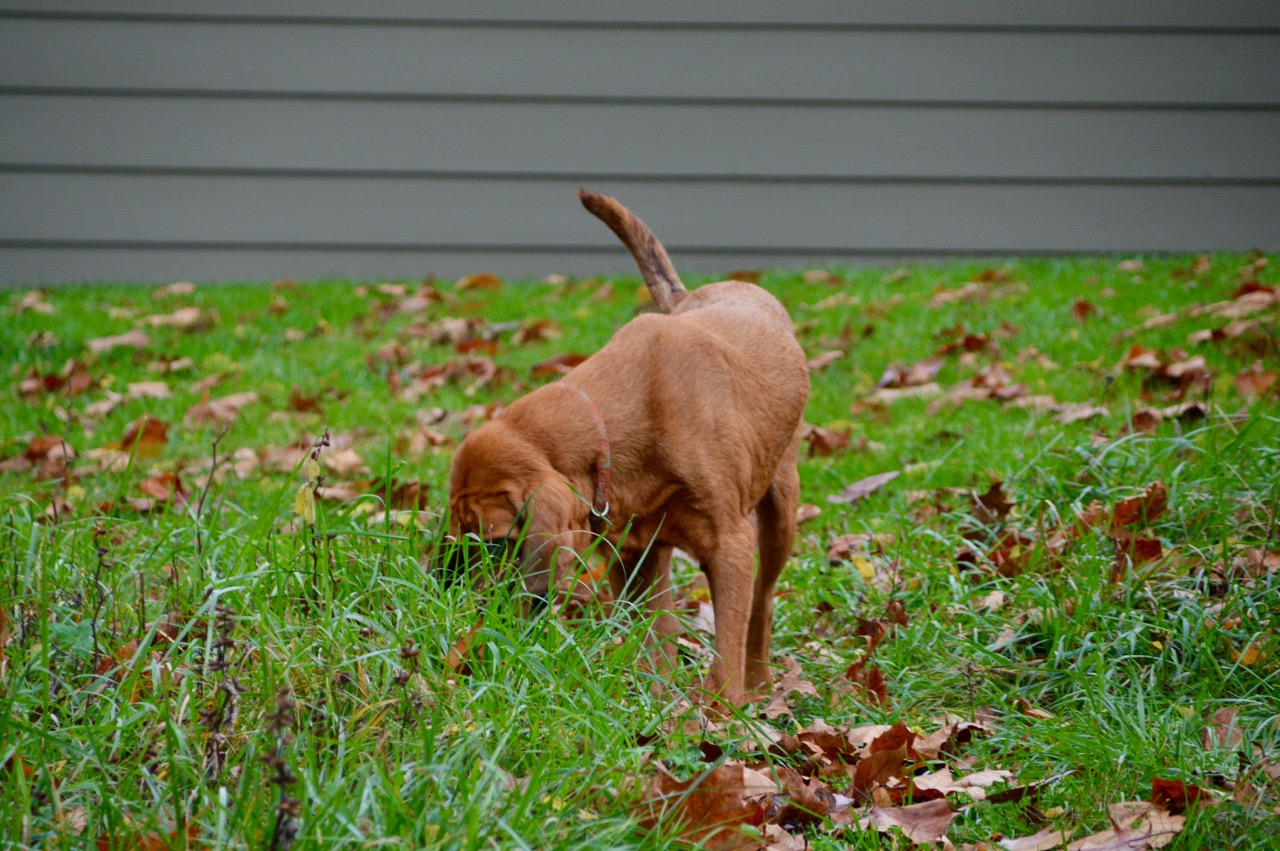 I'm not a fan to the Daylight Savings time change. For many years Indiana did not change time. If I am not mistaken I think only Arizona and Hawaii have maintained their sanity and don't change time. It's slight I know and I use to love the fall change when working for that extra hour of sleep but it doesn't apply anymore being retired.

I can feel the change though. Luckily all the computers, my Garmin watch, the Directv DVR change the time automatically. Only my microwave in the kitchen keeps staring at me to correct it's clock. Both of my cars will be waiting for me to manually change their clocks the next time I get in.

Time change doesn't affect the hounds. They want to be fed the same times although the clocks show something different. Sadie wants to walk any time of day or night and this morning she took off like she was on a mission, not waiting for neither Stella or I. 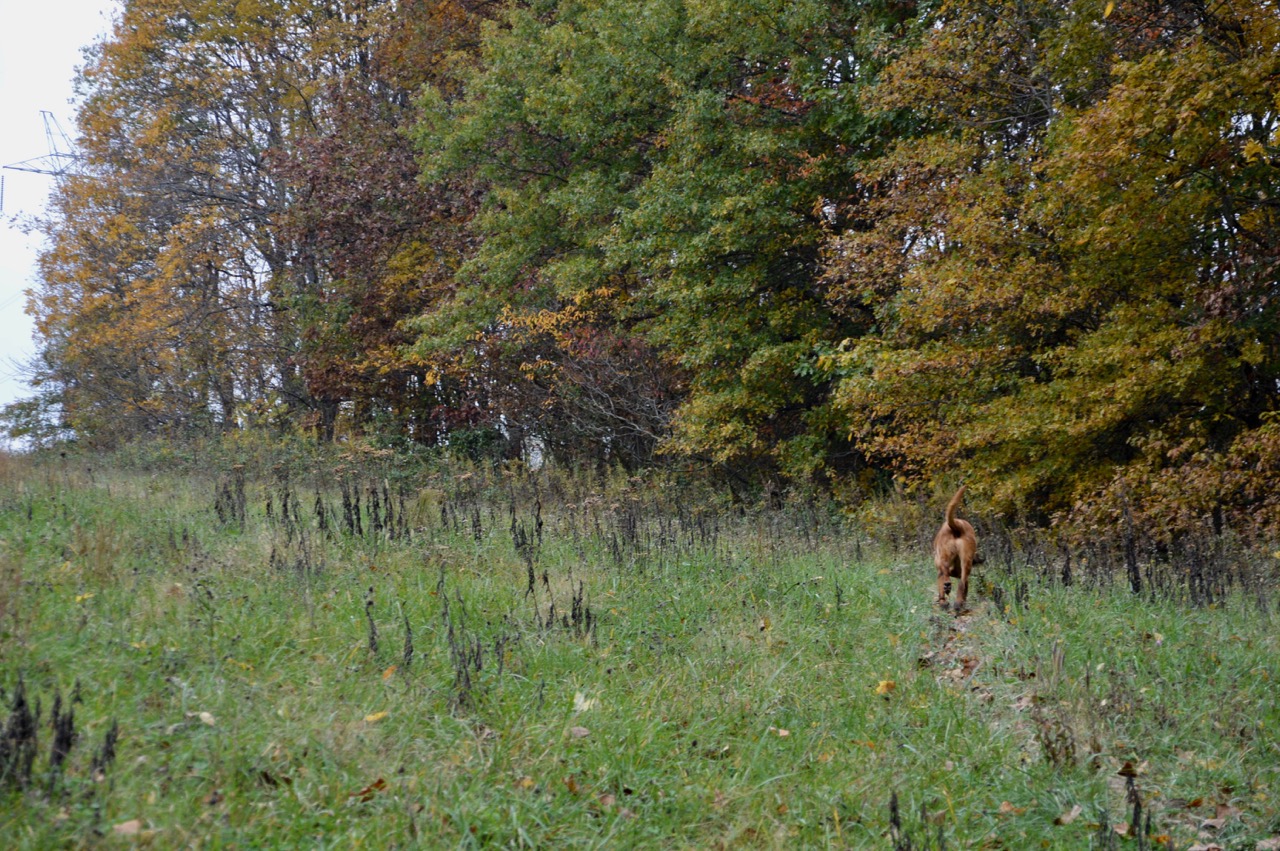 Deer scent seemed strong this morning. Both hounds were pretty active during the first part of the walk. I was back to wearing my cargo shorts with a t-shirt. Only today I slipped on a light rain jacket in case the rain showed up a little early. There was nothing on the weather radar showing anything was close to us, hundreds of miles away and only spotty. Yet, I could hear rolls of thunder as we walked. 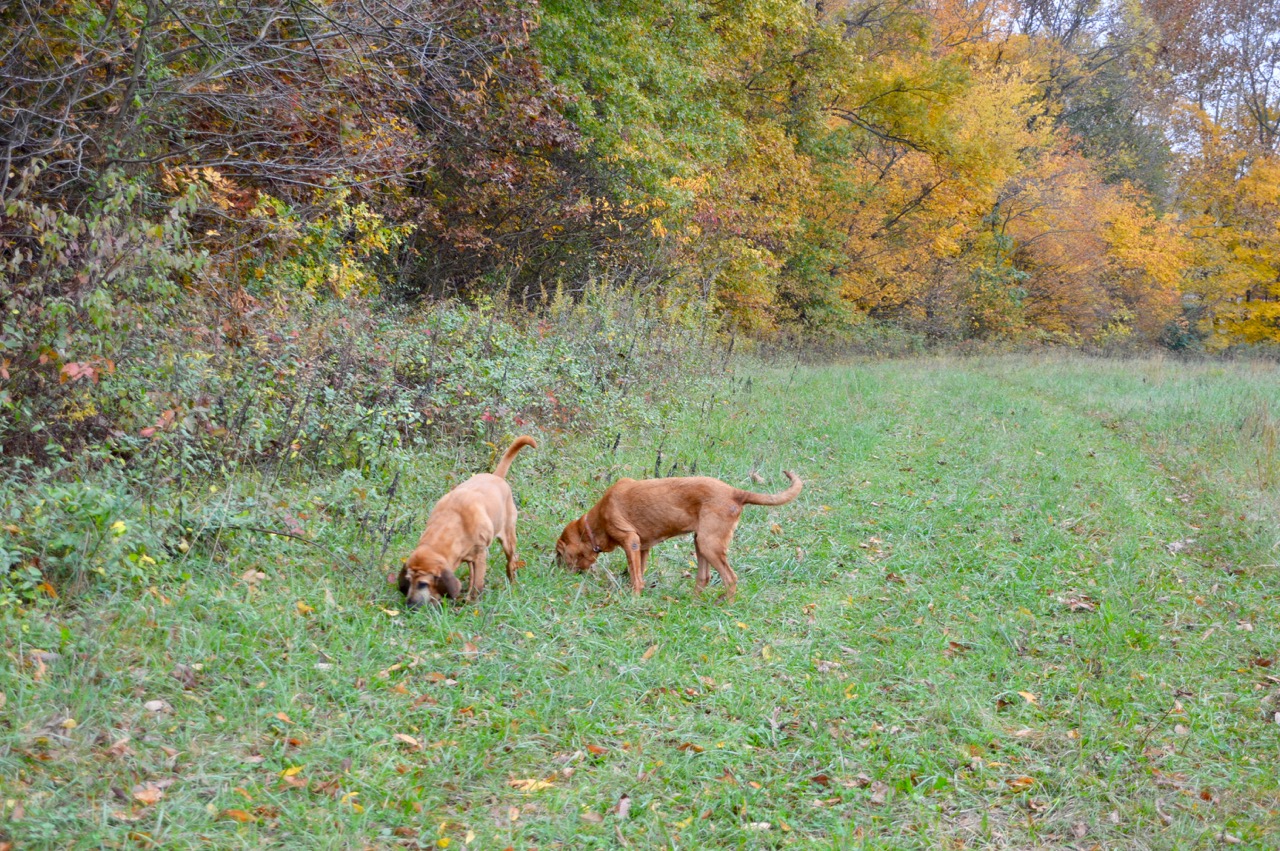 At the first corner both hounds stopped immediately and I was sure that Sadie was heading inside the woods and down over the steep hill. I didn't like why she stopped but glad she did. I reminded them of why we were out here ... to walk. They agreed and reluctantly moved on. 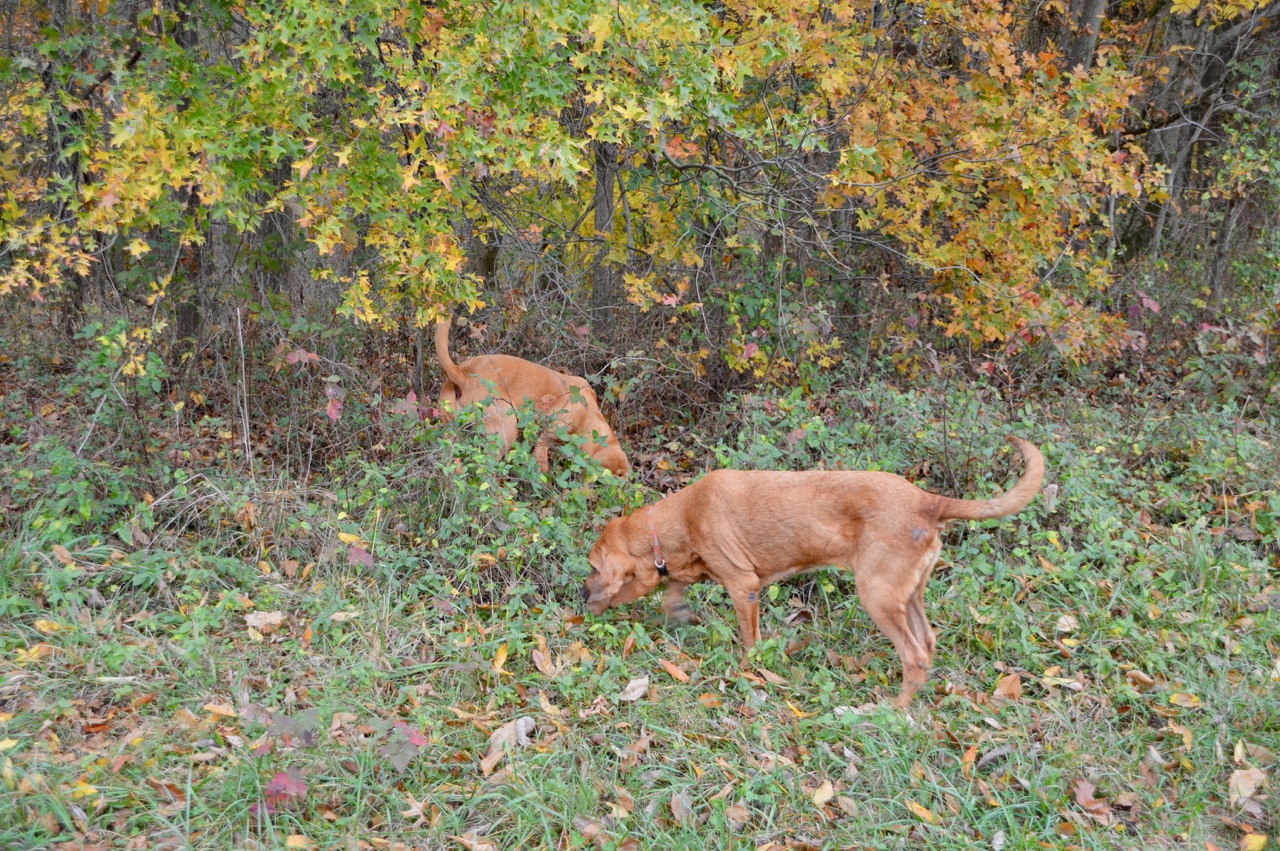 By moving on, I mean ... about 25' before they found another highly interesting spot. 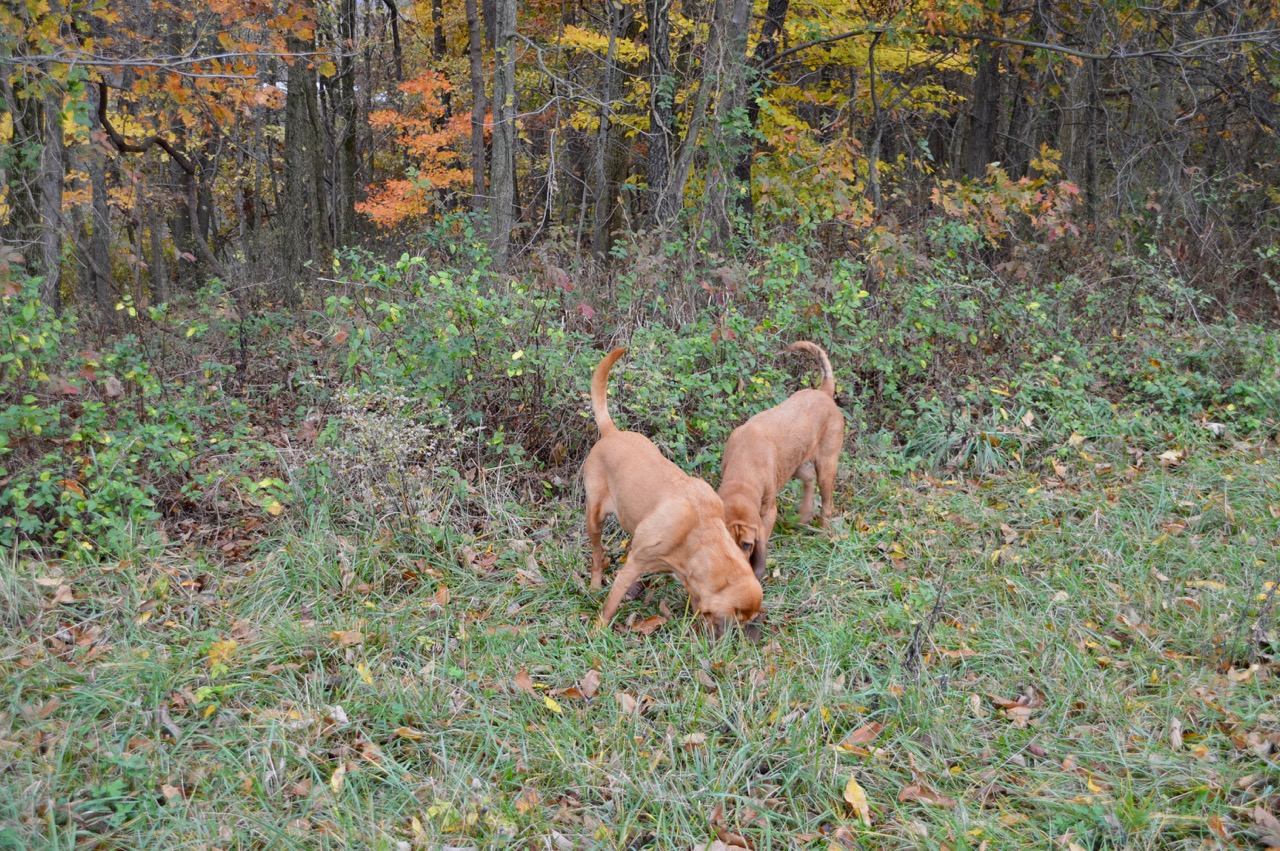 Soon after that Sadie took off and was heading for the 'far right corner', Stella was dragging her paws behind me with every step she took. A sure sign she was pouting and not happy about not being able to lag behind. 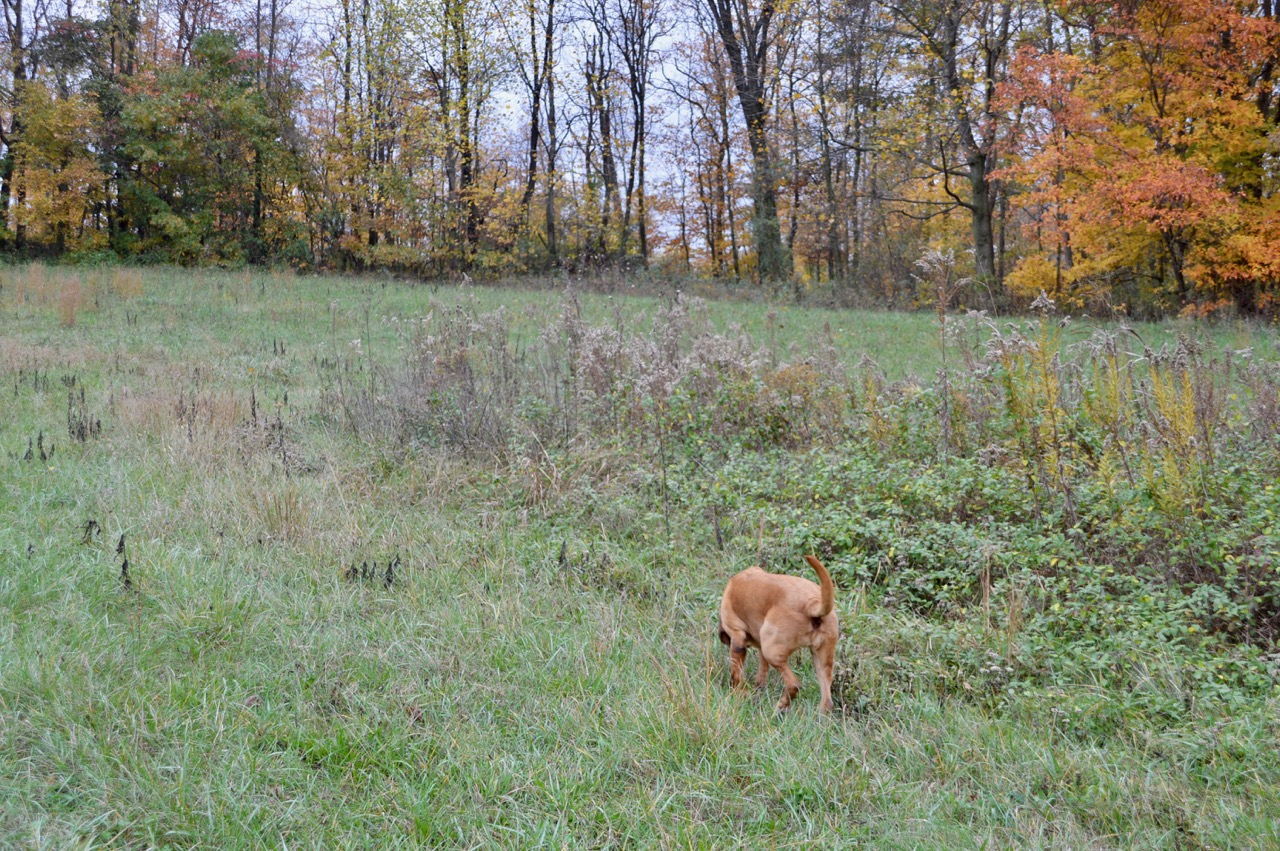 When I heard another roll of thunder I decided to cut the walk short and made a left turn on the ATV path that parallels the back edge of the field. This is Stella's favorite path ... can't you tell by her excitement? 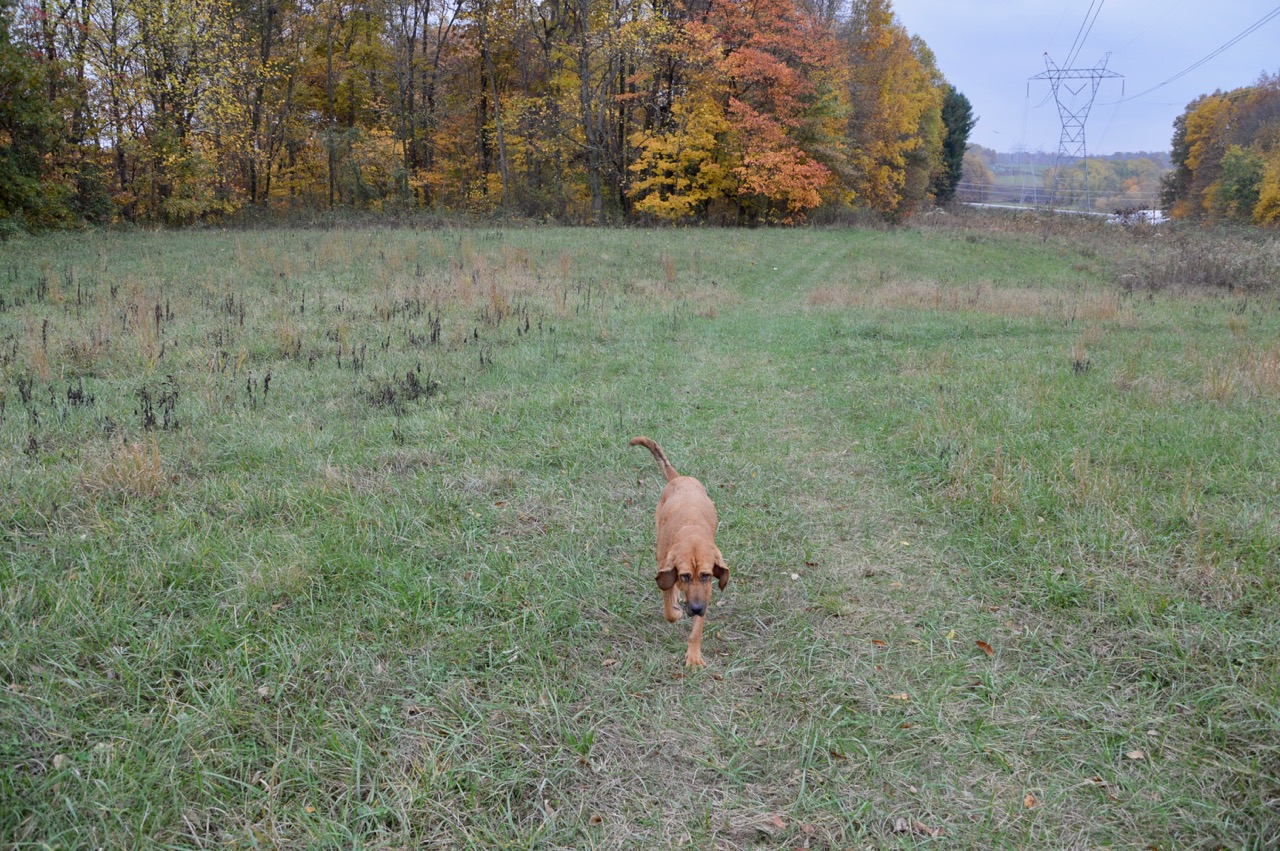 As Sadie and I continued on I didn't realize that Stella decided to make the walk even shorter. She was cutting across the field to meet us on the return path home. I was a little surprised to see some nice leaf color today. 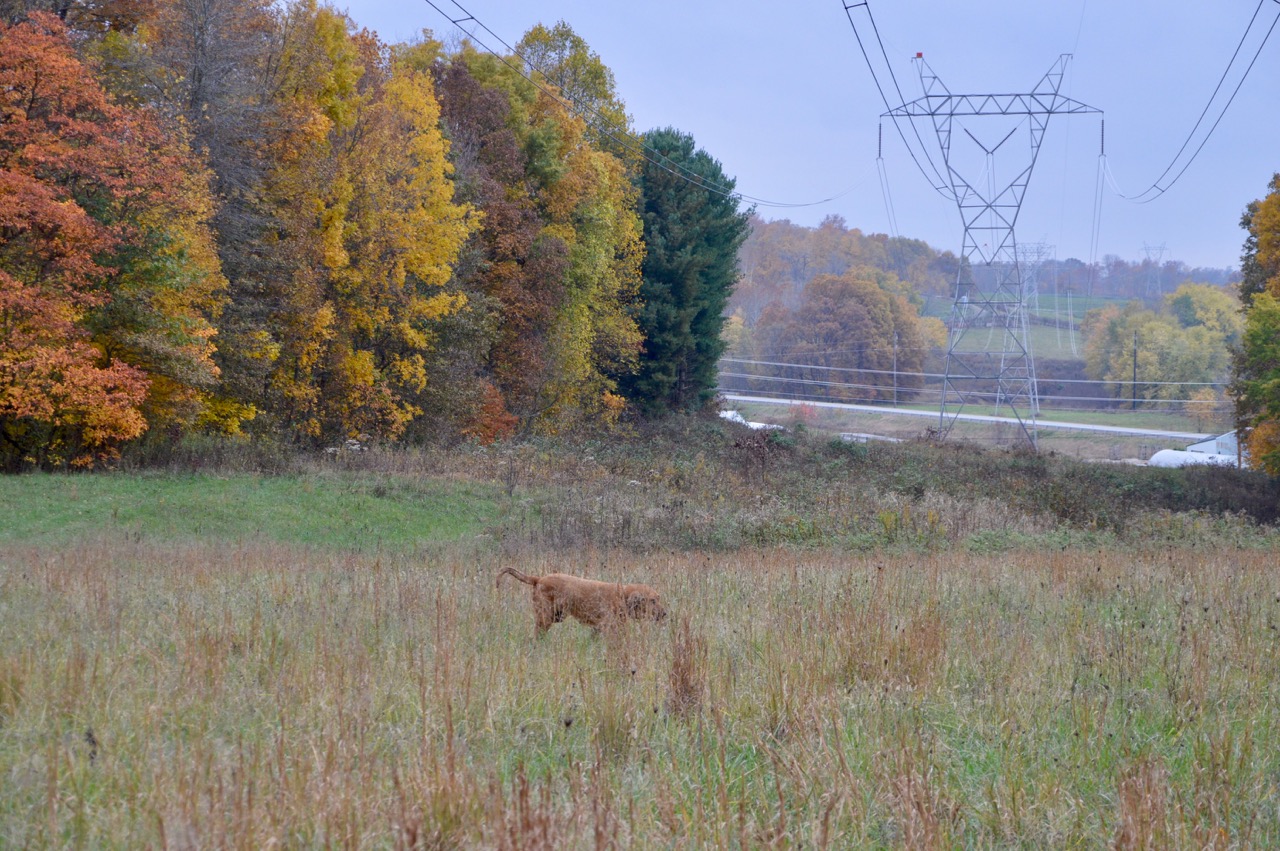 Stella met Sadie and I on the path home. She was walking at a pace we normally see in her afternoon walks with two speeds ... slow and slower. That is, until a roll of thunder was louder than the other two I heard. She decided it was time to get back to the house and came trotting toward me and ran right around me. 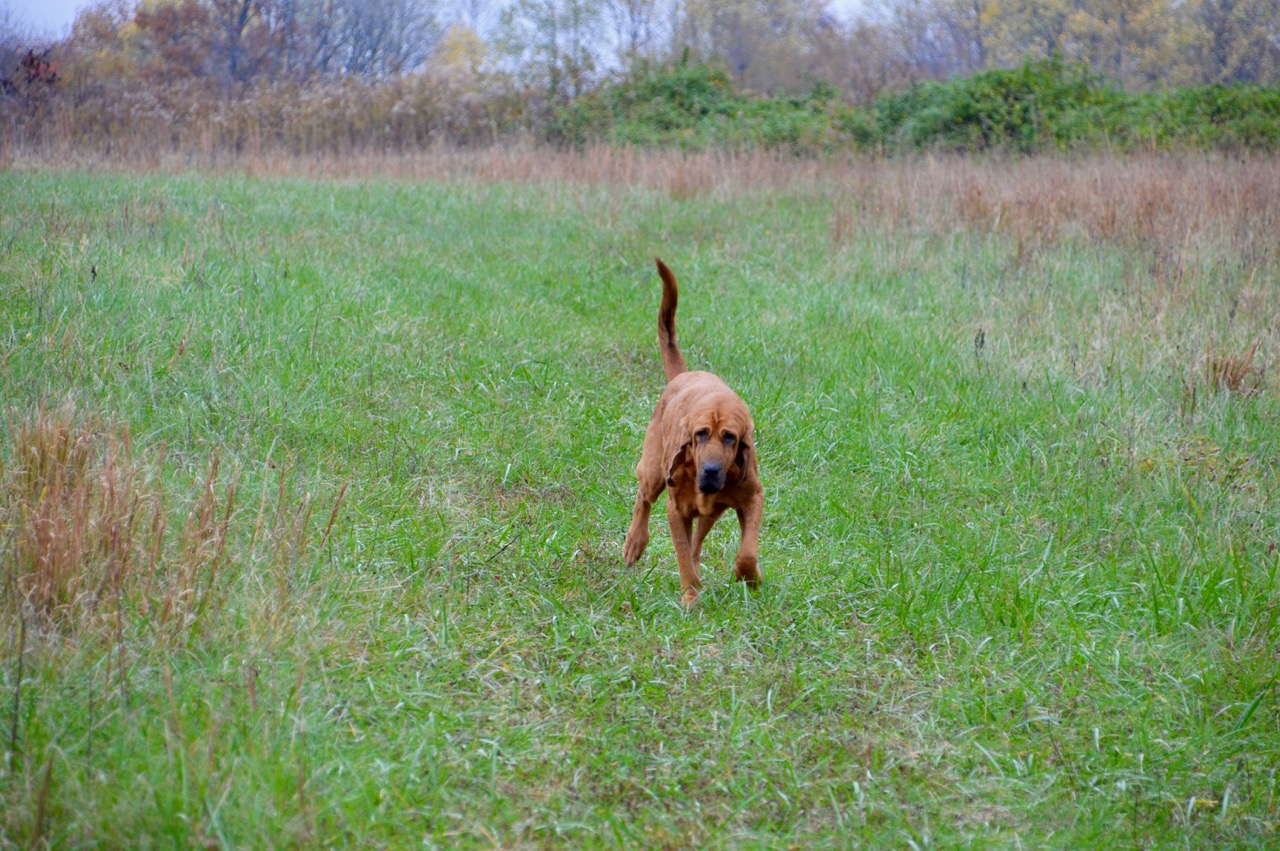 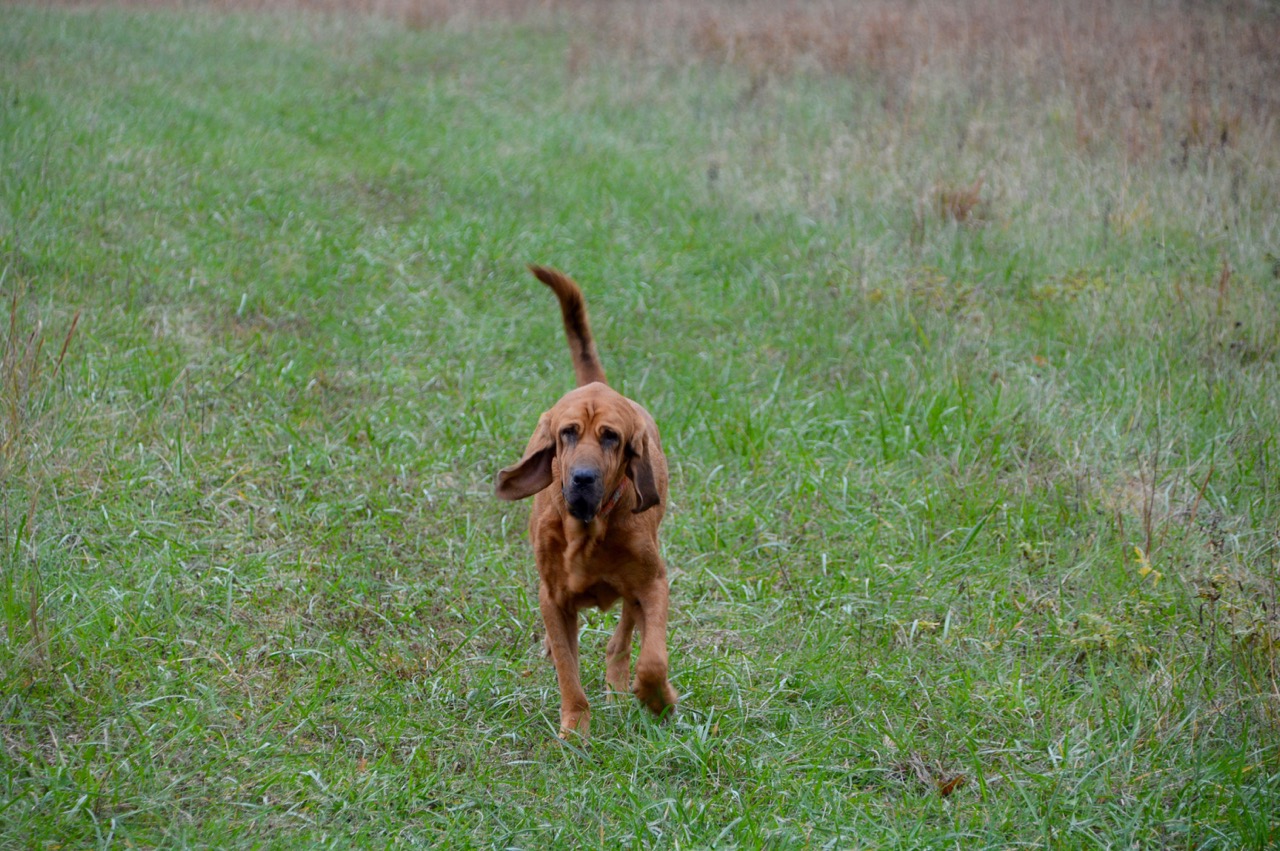 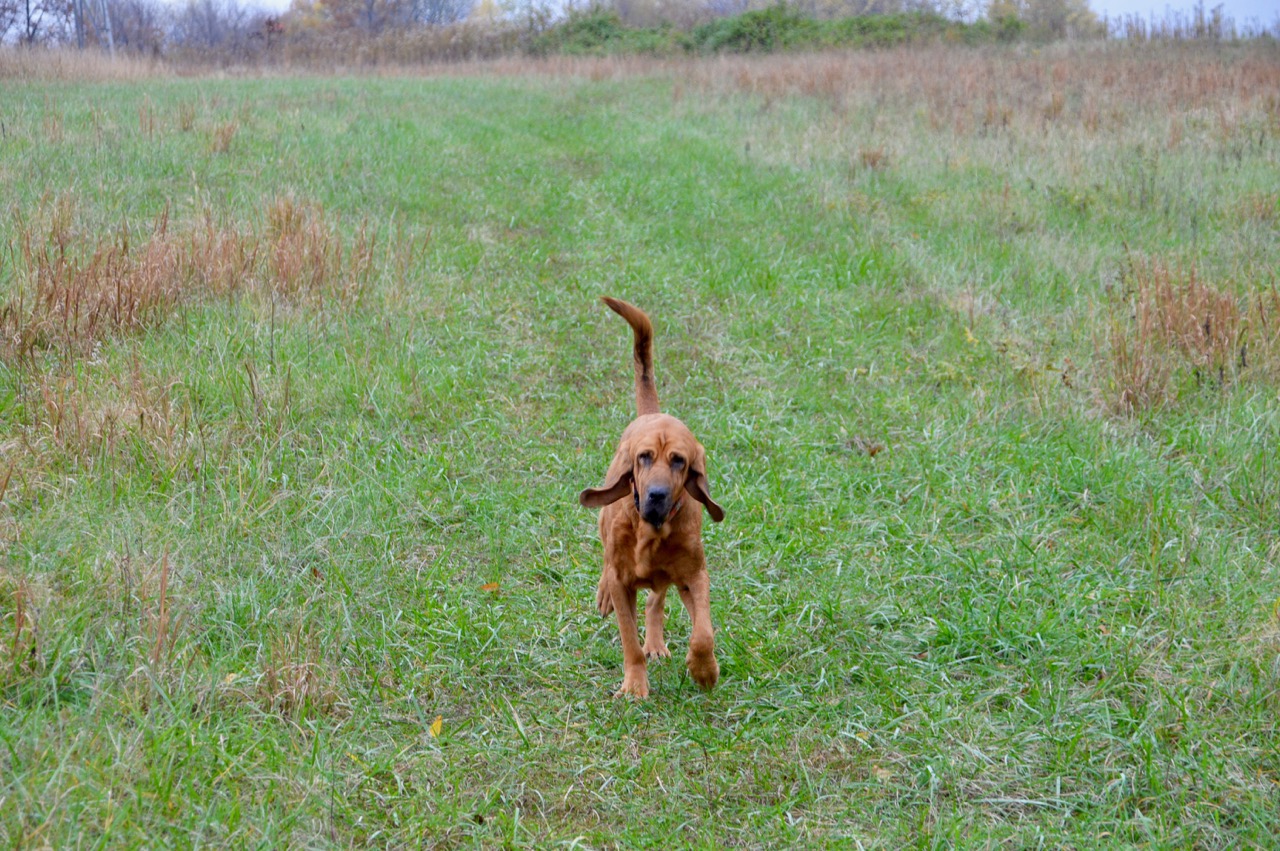 I was going to give her the shortest route possible by taking the 'alternate' path but both hounds had other ideas. They decided to ignore where I was going and started heading for the neighbors side of the field. 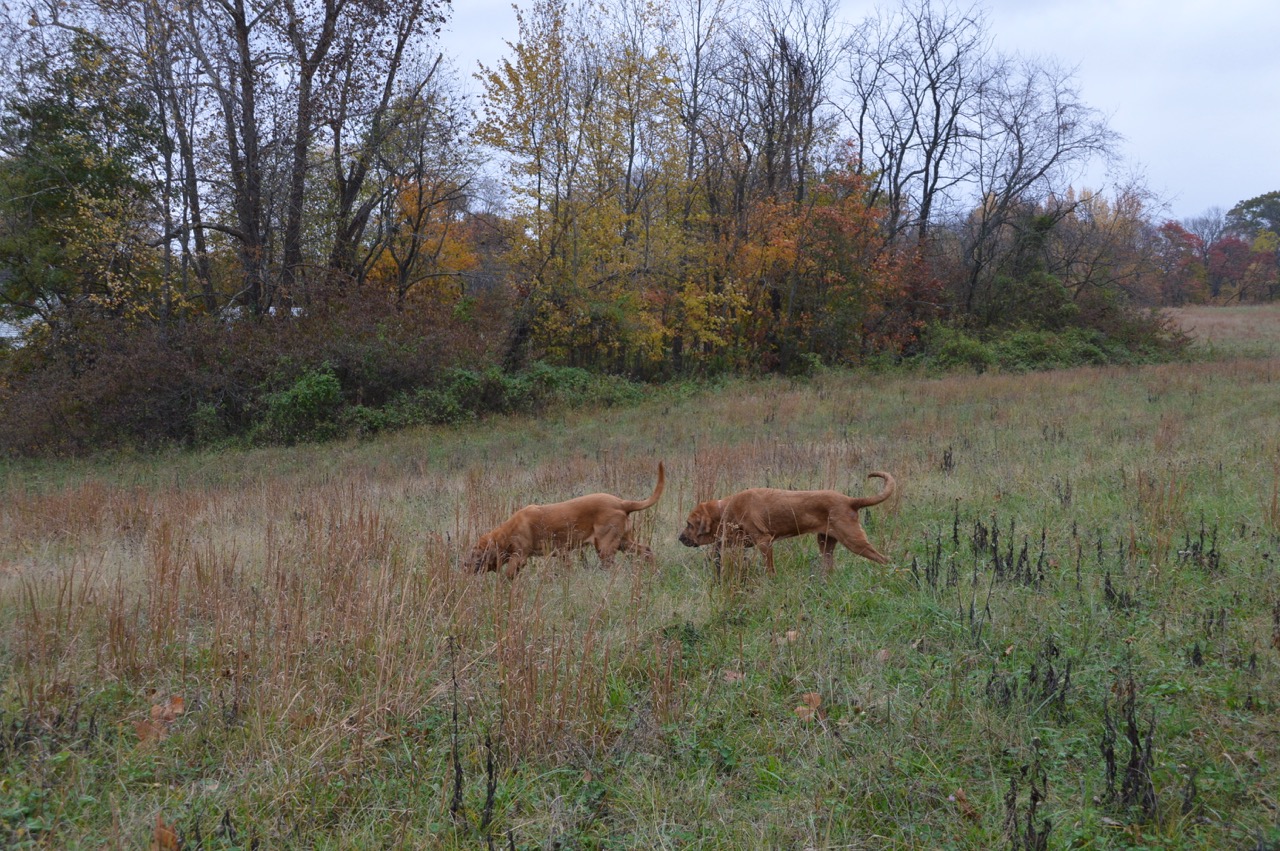 I stood at the corner of the yard calling them. The winds were picking up, the skies seemed to be getting darker even with nothing scheduled until later today. I have no idea why but both hounds made a quick left turn toward me, got back on the path and came running into the yard. 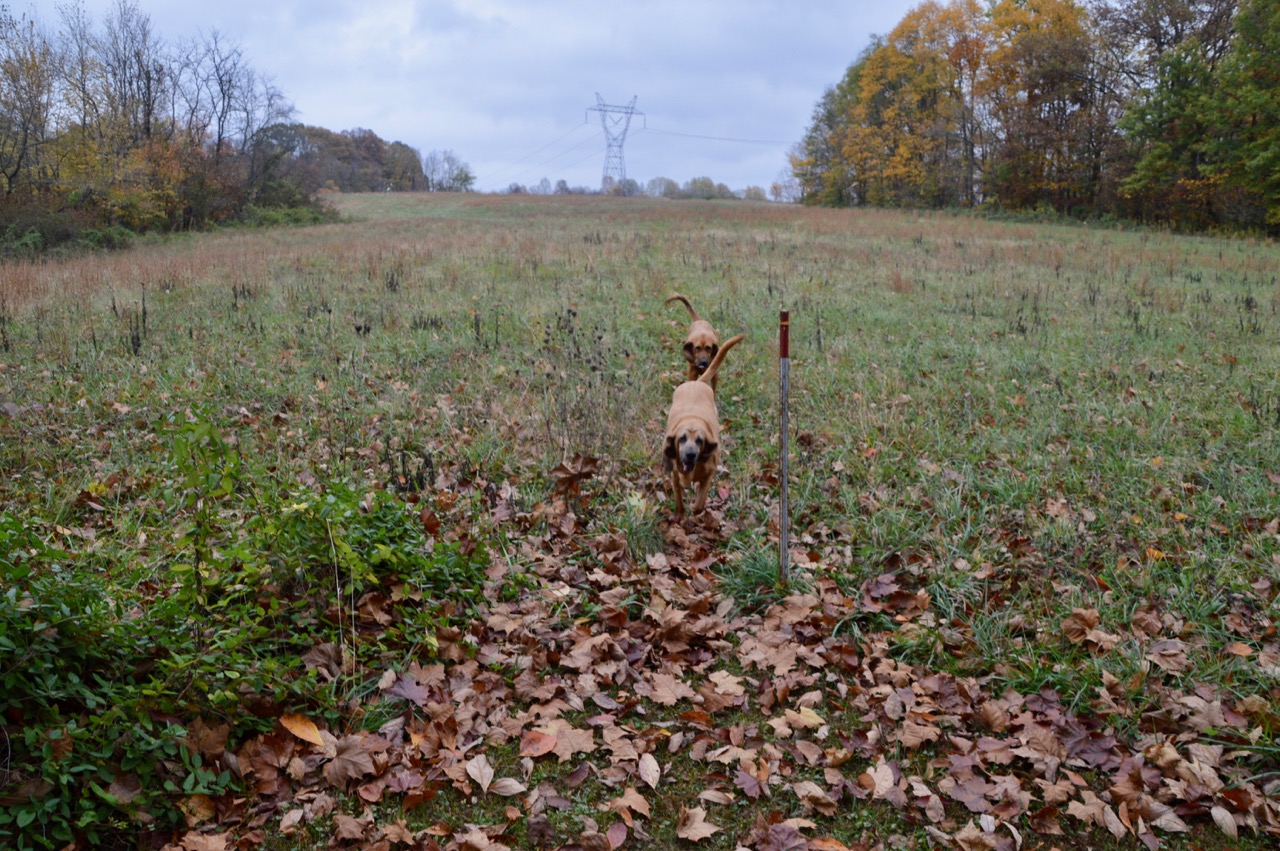 They didn't stop running until they hit the backyard next to the old trees and the 70 year old wire fence stretched out between them. The wind was blowing in my face as I took this picture and again I am hoping a lot of these leaves disappear by tomorrow morning. 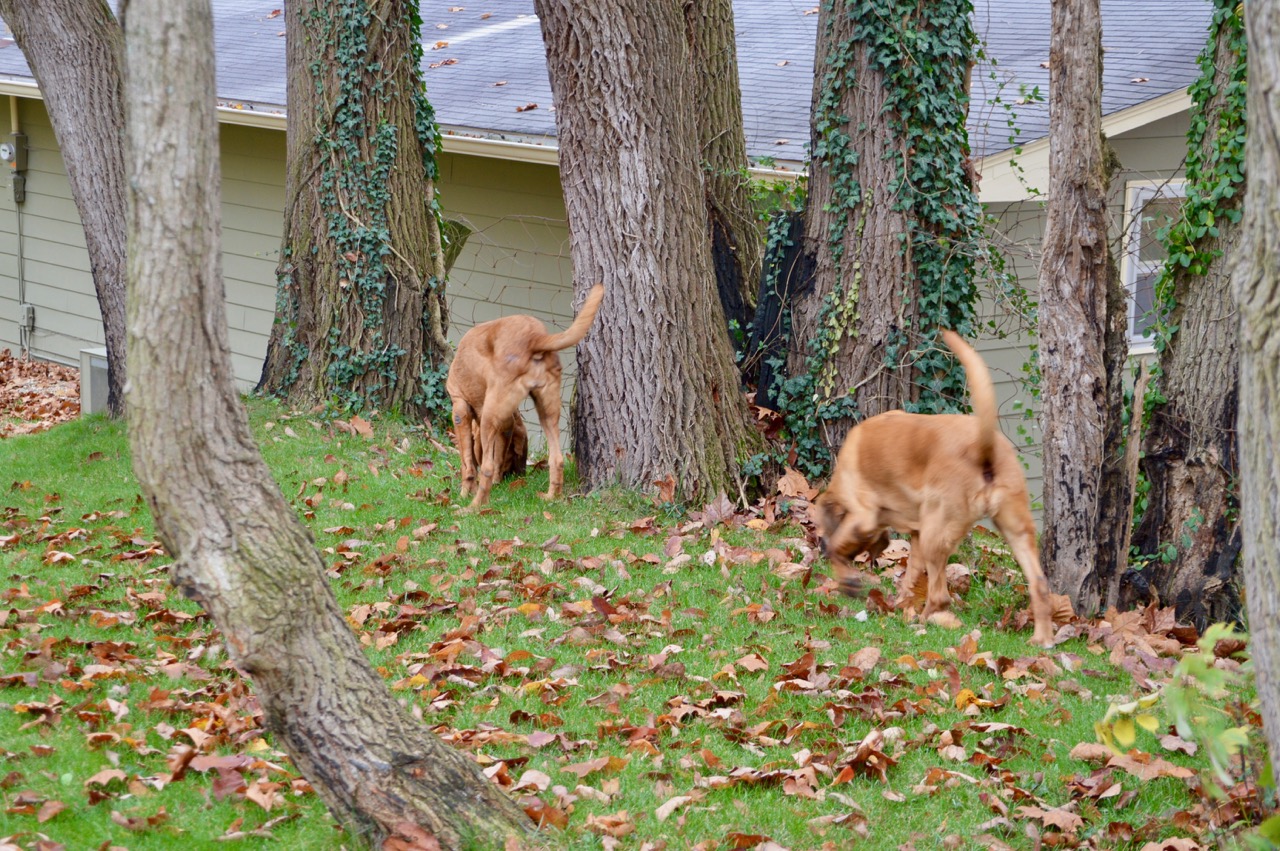 My small side yard on the north side of the house is the "leaf collector". It's easy to rake them up right there and transport them to the burn pile while making numerous trips with filled 32gl trash containers packed with leaves. One year I burned them right there after I raked them into a pile. A terrible decision and maybe one of my Top 10 Worst Decisions ever.

Actually I can clean up that side yard in less than 30 minutes. 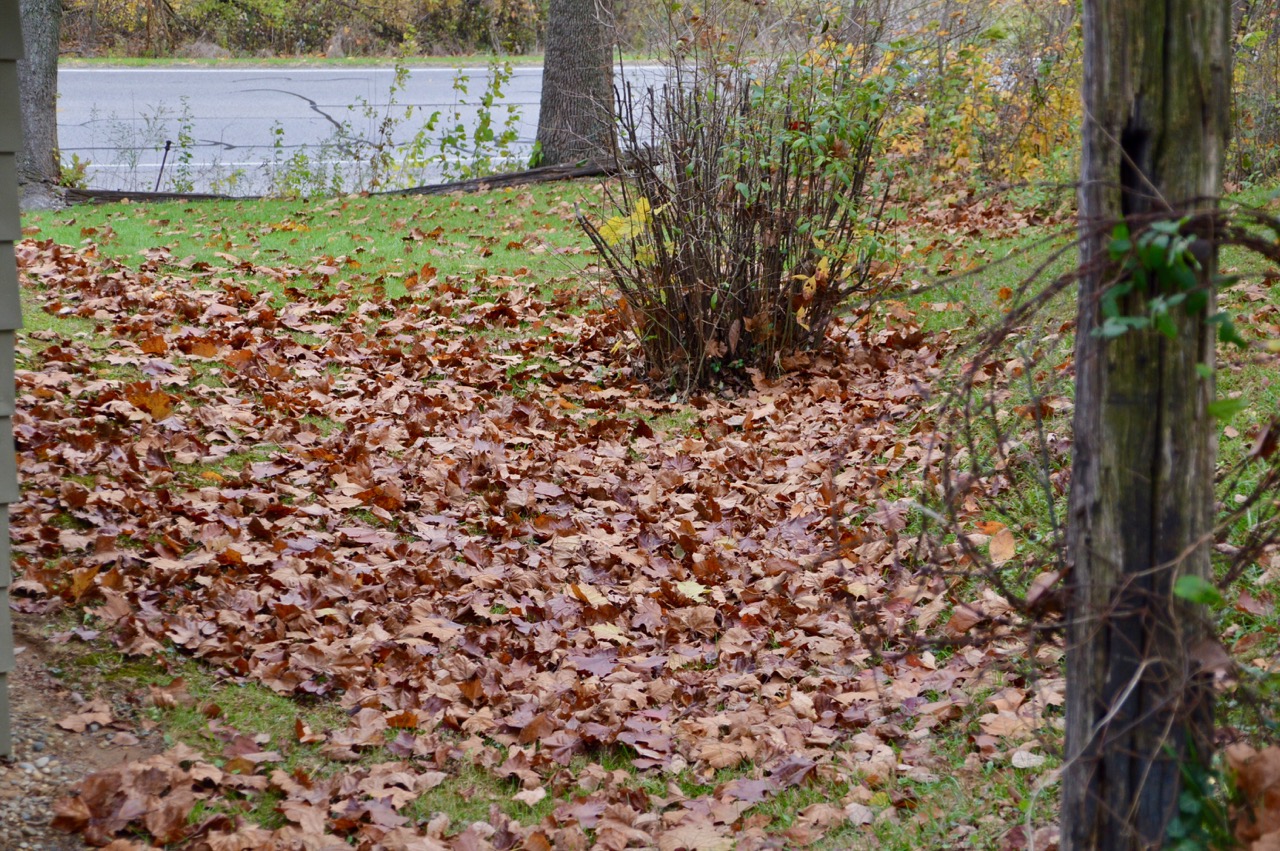 I use to really like 'severe storms'. I still do in a way and with the experiences I've had in this old house up on a hill during high winds, I know what it can take ... it's quite a bit. That all changed though one afternoon in June 2008. It was a week after three different small tornadoes had touched down with a 15 miles radius. I was working at home then and as I spent time on my computer working I thought it was nothing more than a thunderstorm outside.

I was shocked to see the damage as my neighbor was pounding on the door to see if I was okay.

Yes, this is the same view from the carport step to the fields across the highway. That's a 125' Sycamore tree laying across the front yard. 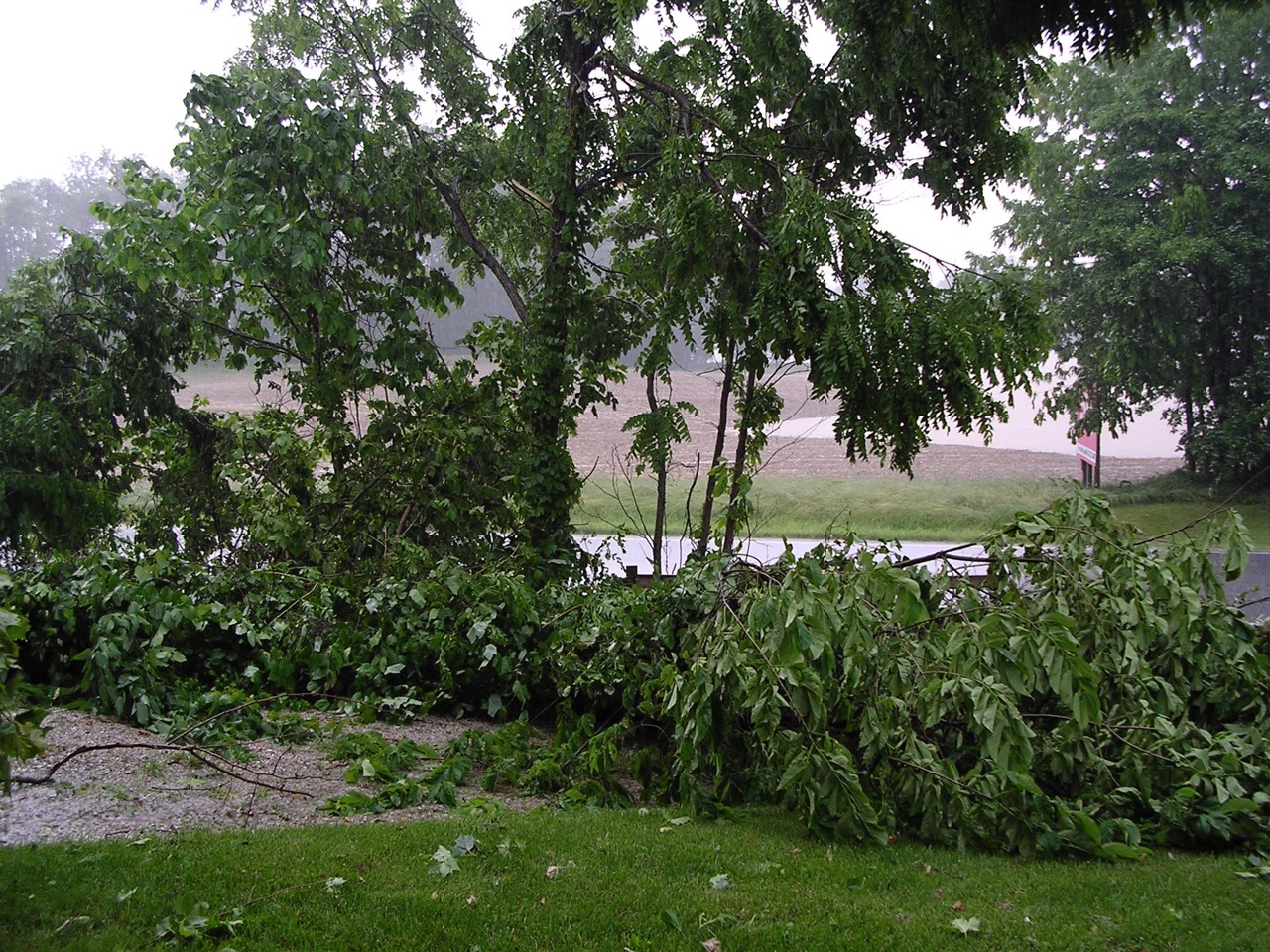 The 80' Poplar tree was not 10' in front of the house. Luckily it fell parallel to the house taking out part of the fence on the north side. 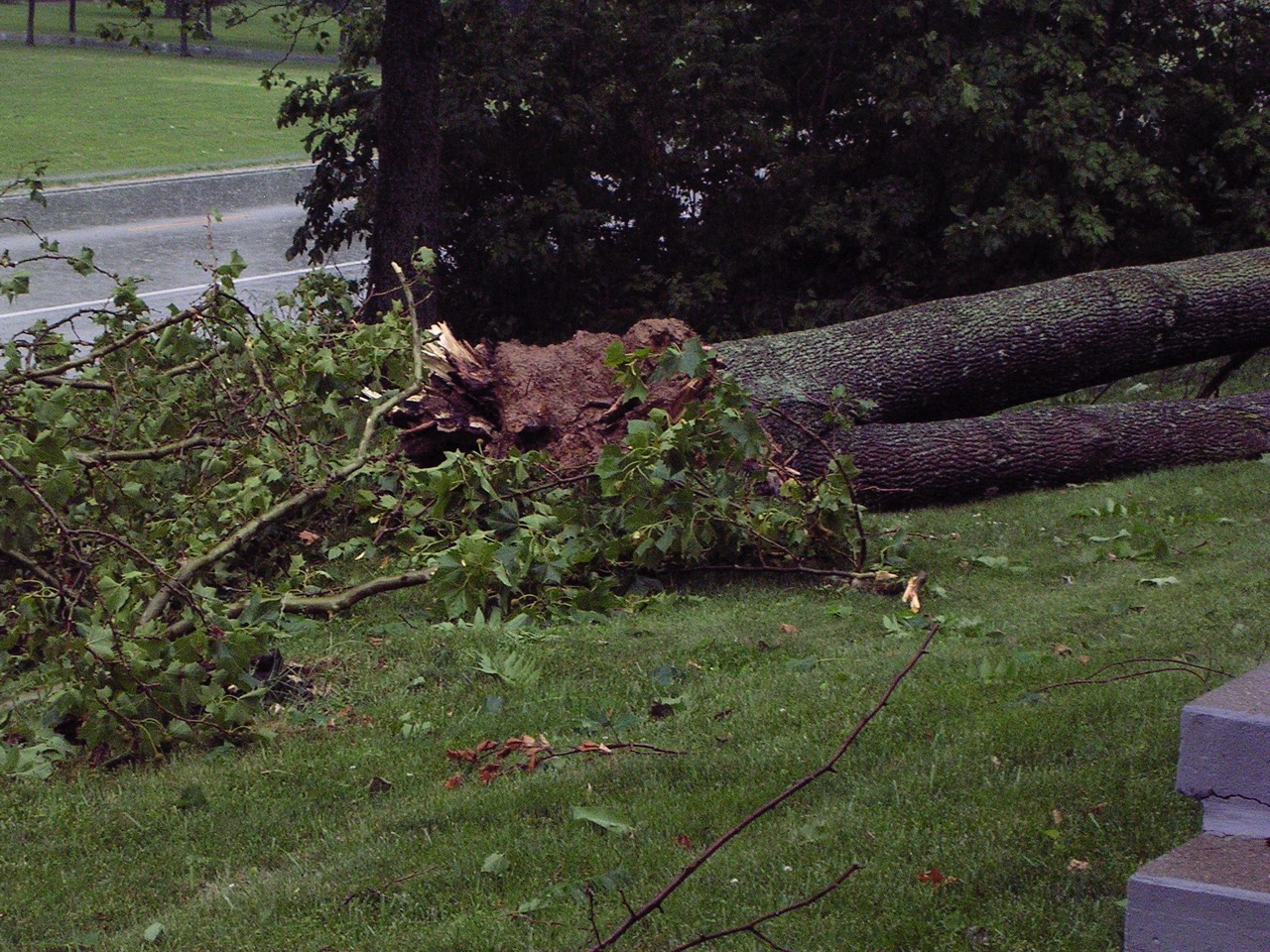 With the loud explosion of the electric transformer box on the pole in the driveway, and Winston letting out a louder than normal howl, I found out later that lightning had struck the top of the Sycamore tree still standing today. The top 45' of that tree fell onto the corner of my house damaging the corner of the carport. This is a different angle of the Poplar tree ... doesn't look like it had much of a root system. 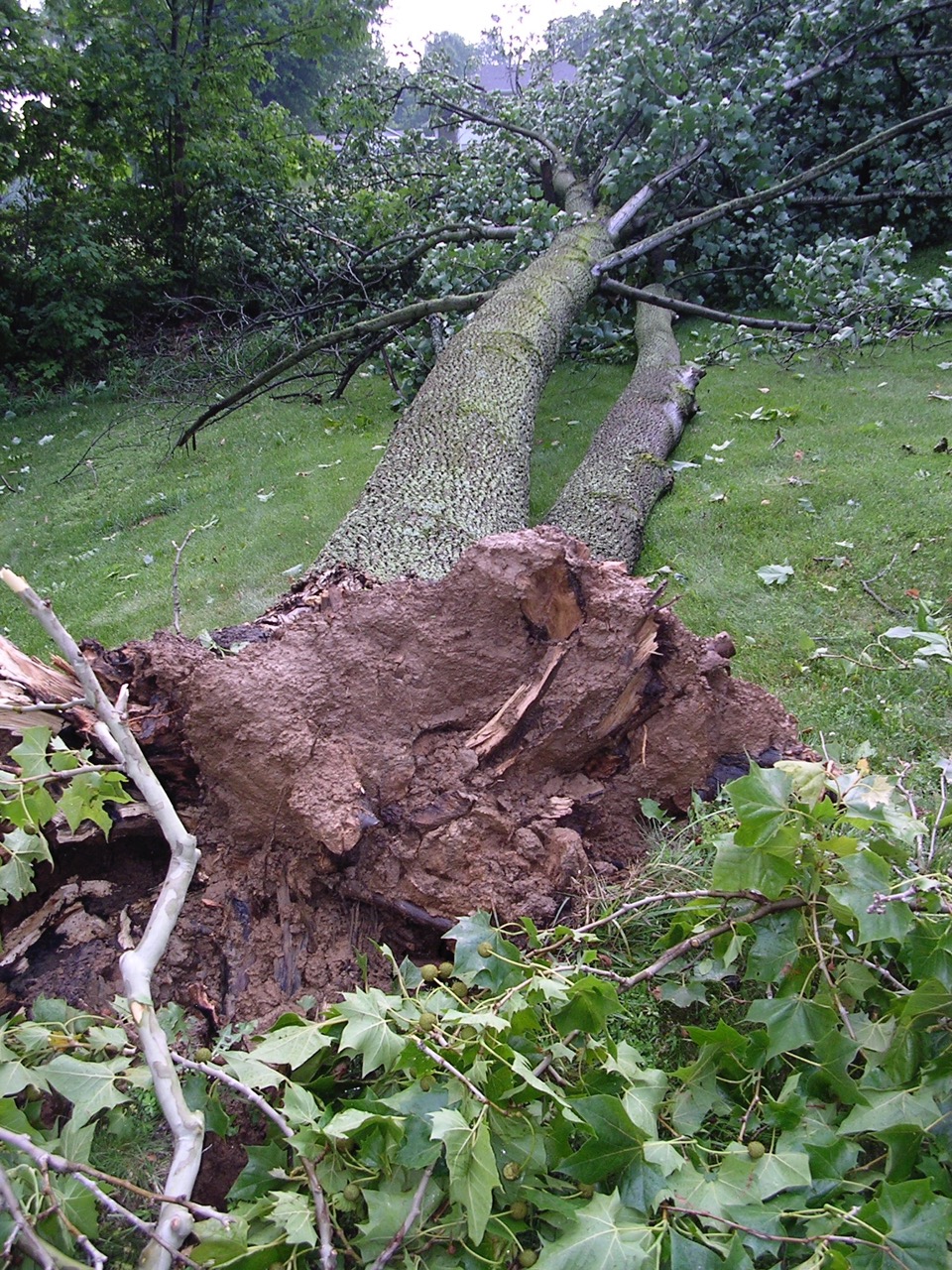 Another picture of the Sycamore tree. That isn't Sadie checking things out but Bertha only a couple of months before I bought Sadie as a 12 week old puppy. 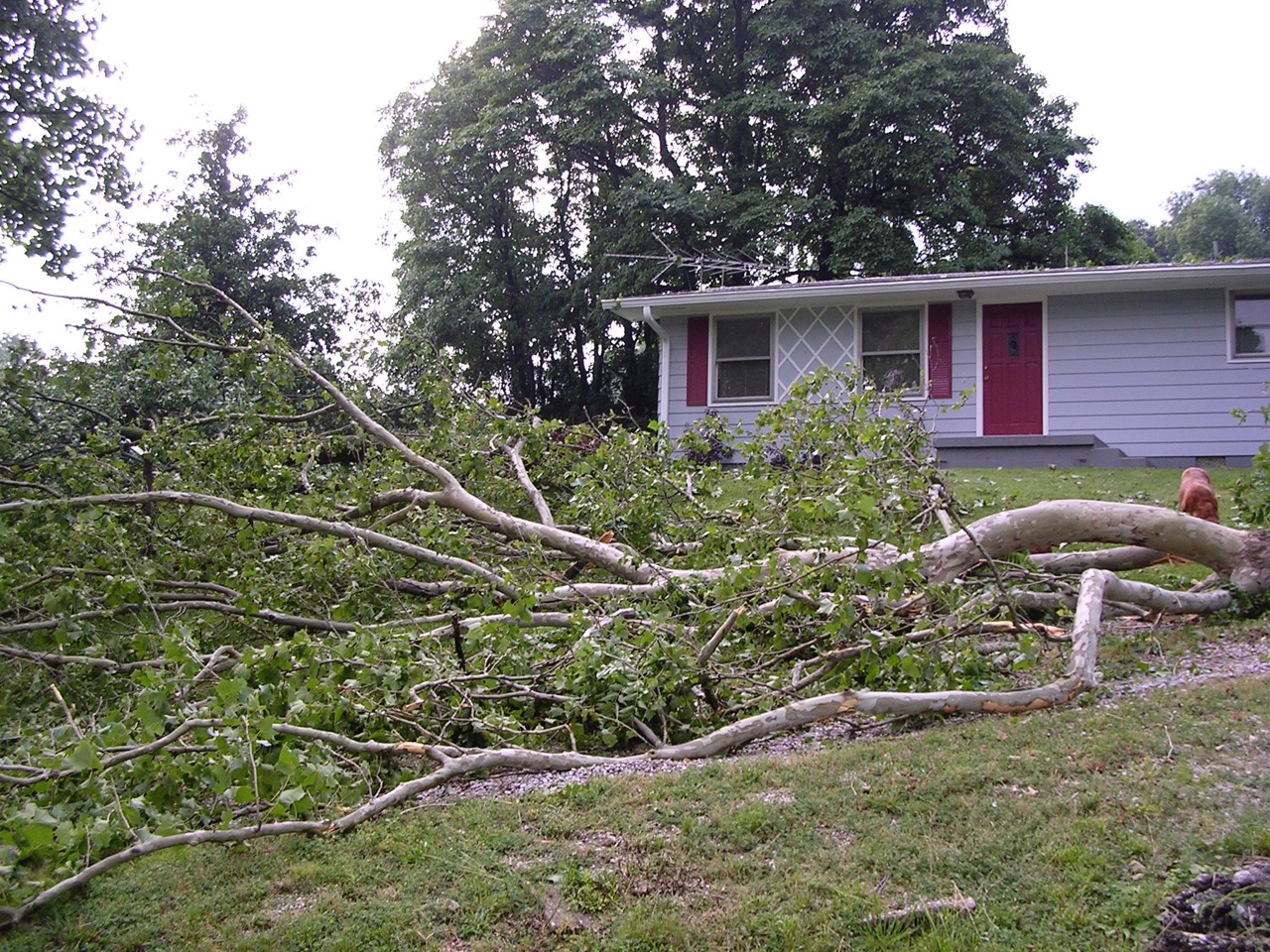 Another view of that same Sycamore tree blocking the driveway and tearing out 16' of fence.  You can barely see Winston in the lower right inspecting the damage. Notice the tree top leaning against the corner of the roof. 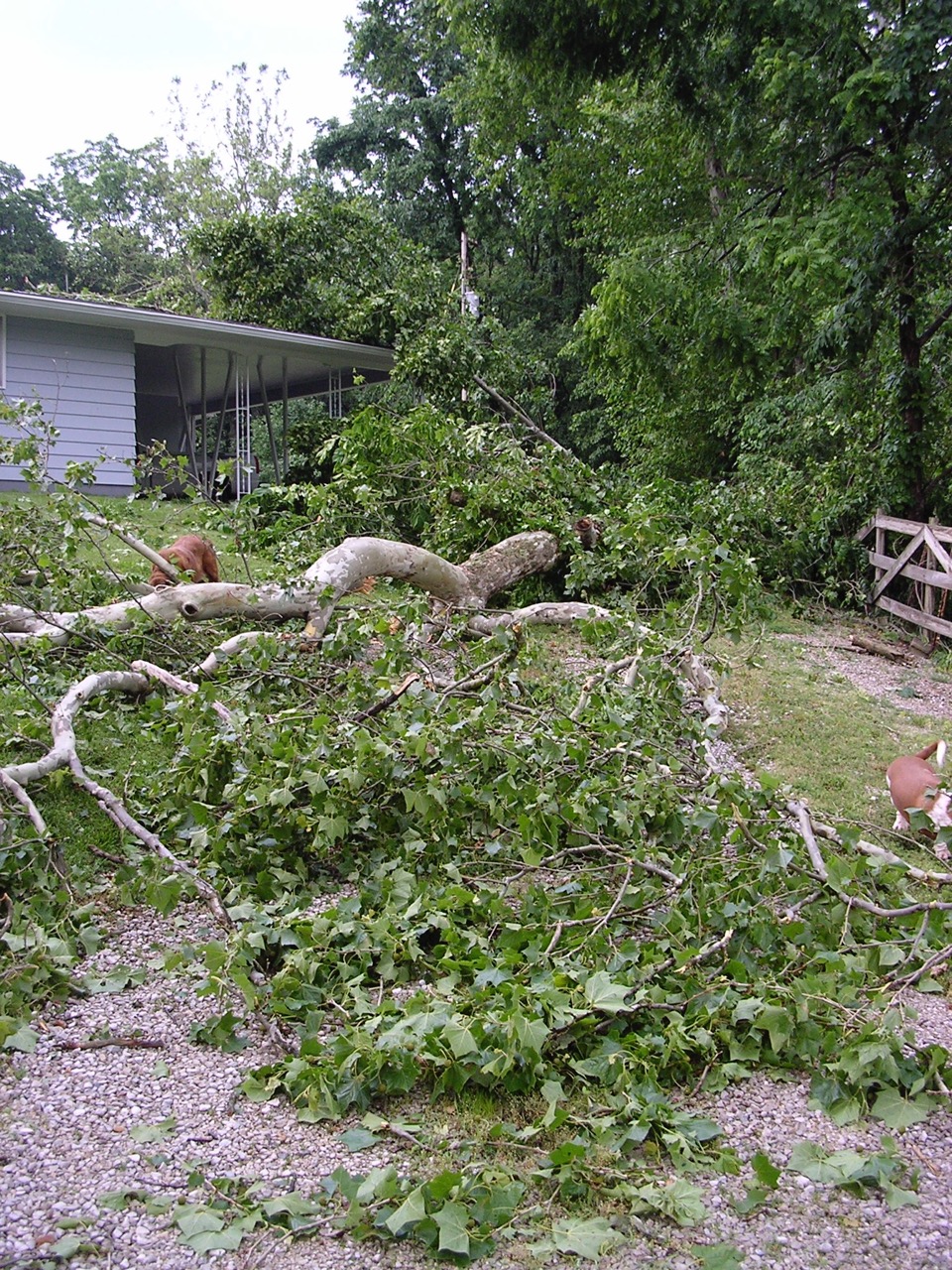 This shows obvious reason why I had the Directv Tech mount the dish to the house after he came to repair my system. With the 100' bank full of tall trees before the storm, the only location to get a southern reception for my tv satellite dish was to put it on a pole further down the front yard. As you can see, the dish is not properly aligned with the 'southern sky' after the storm.  LOL 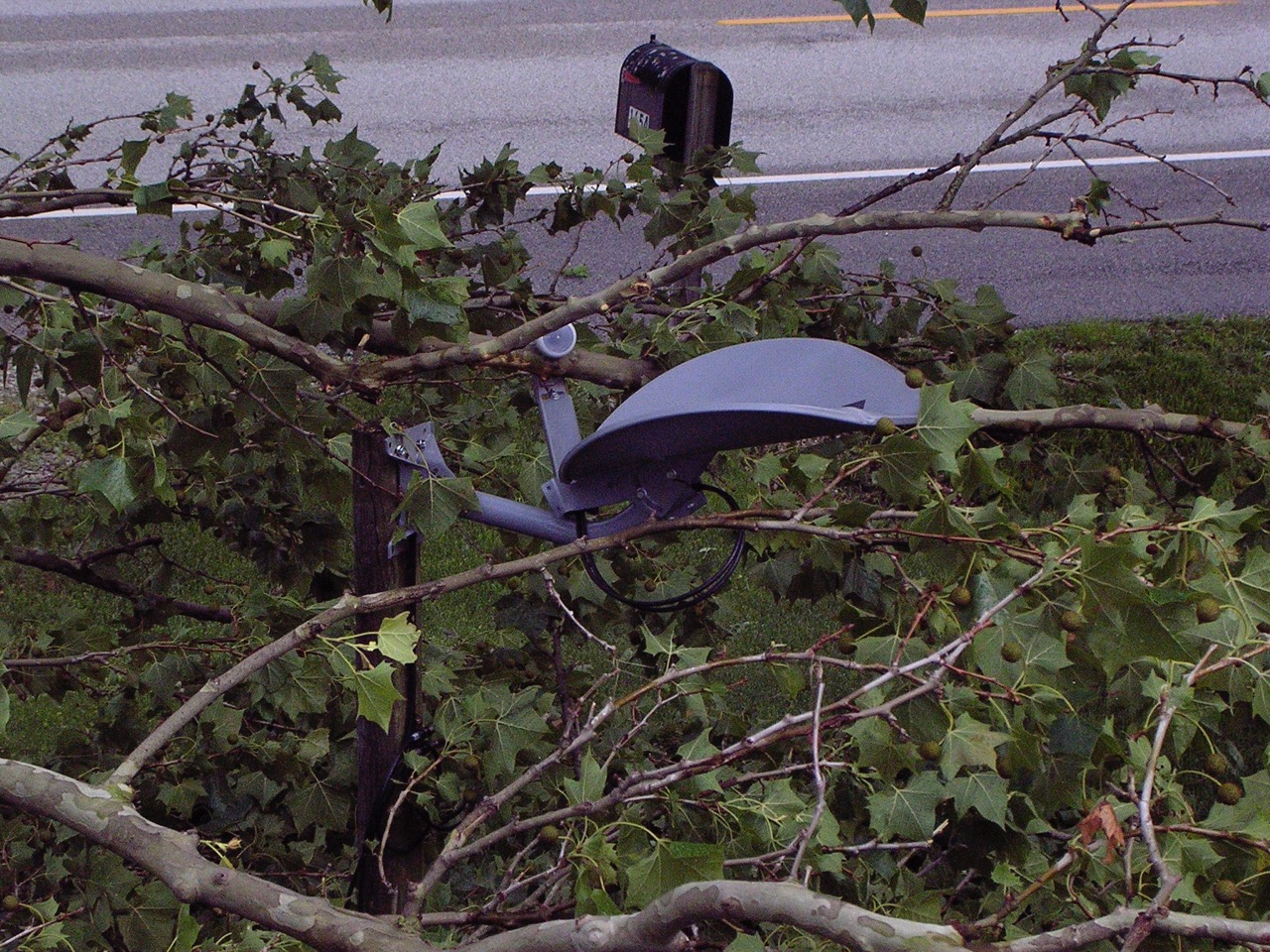 When it finally occurred to me that afternoon it was more than a thunderstorm, I was trying to herd Bertha and Winston to the small bathroom because it was in the center of the house with no windows. About the time I picked up Winston in the living room ... the winds stopped immediately and I mean immediately ... just like that.

So since that time when I see severe winds, damaging winds with possible hail forecasted I admit I feel a little anxious. Yet later today the hounds and I will "button down the hatches", sliding the storm window screens up and sliding the windows down. That 70° weather will be gone, replaced by low 50's.

With the wider than normal overhangs, I like to keep the small screened window open in my computer room so I can stand and watch for any problems in the woods behind me plus listen to the sound. I'll probably have the local tv weather station on as long as we have power.

I have found that during these severe storms my satellite for tv and the internet is pretty good. It does not lose it's signal nearly as often as they did when they first come onto the market 20 years ago.

I'll take some photos after the storms, if they show up. Many times they will move south and north of us and we miss all the bad ones. I hope I'll not be taking photos like the ones I showed you from June 2008. Of course there are not many more trees left to do this type of damage since I did not replace them.