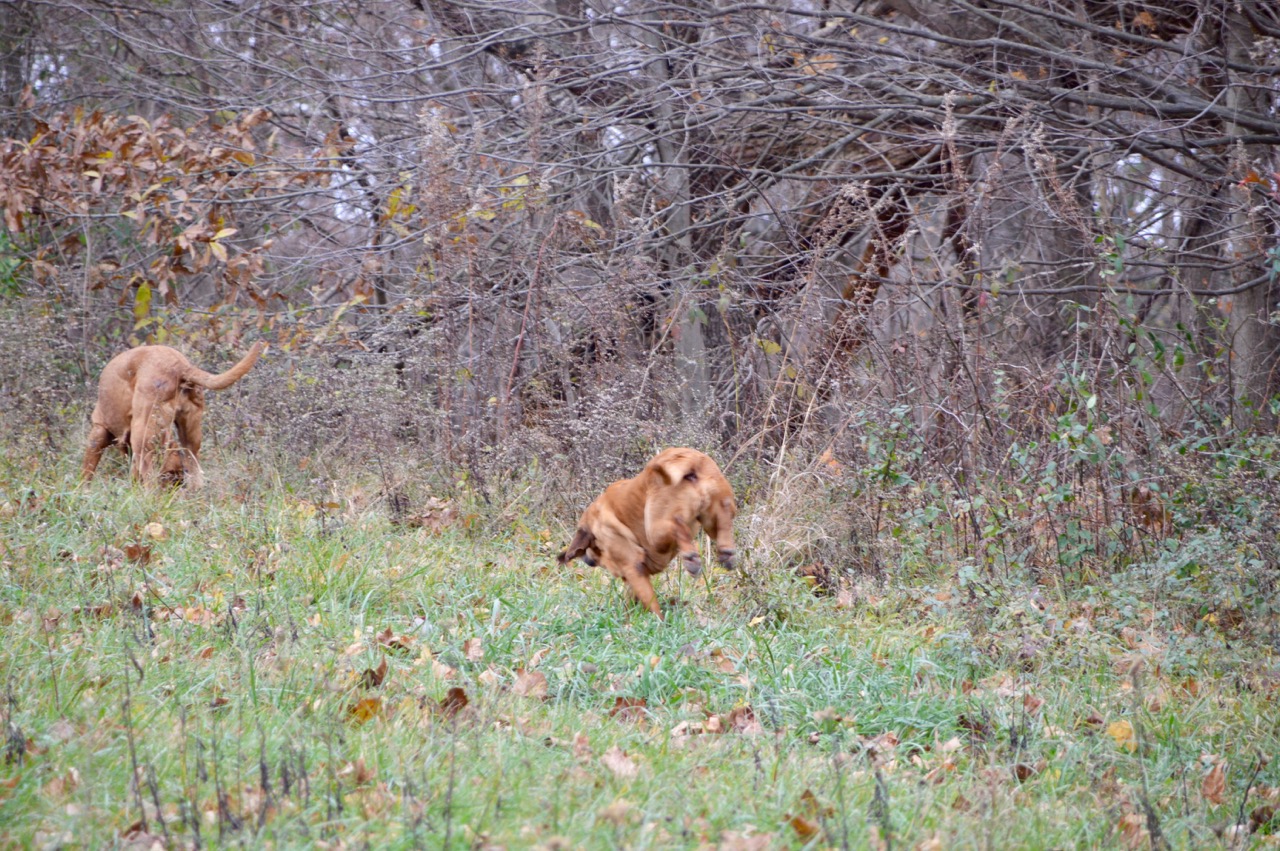 It's always good to have the weather so close to view with just a click of a button or an icon on my phone or computer. It tells me what I need to be wearing on the morning hound walks, whether it's 80° or 25°. Again this morning Stella beat all of us into the field and wanted to beat Sadie to their first stop of the day. Sadie has to be running pretty fast to have both rear paws in the air at the same time.


I was going to let both bloodhounds do whatever they wanted this morning because it was that cold. A wind chill of 25°, wind from the NW made me walk a little faster and take a few photos a little out of focus. Even if there is any glimpse of sunshine today, the hourly forecast shows the wind chill will not reach 30°. 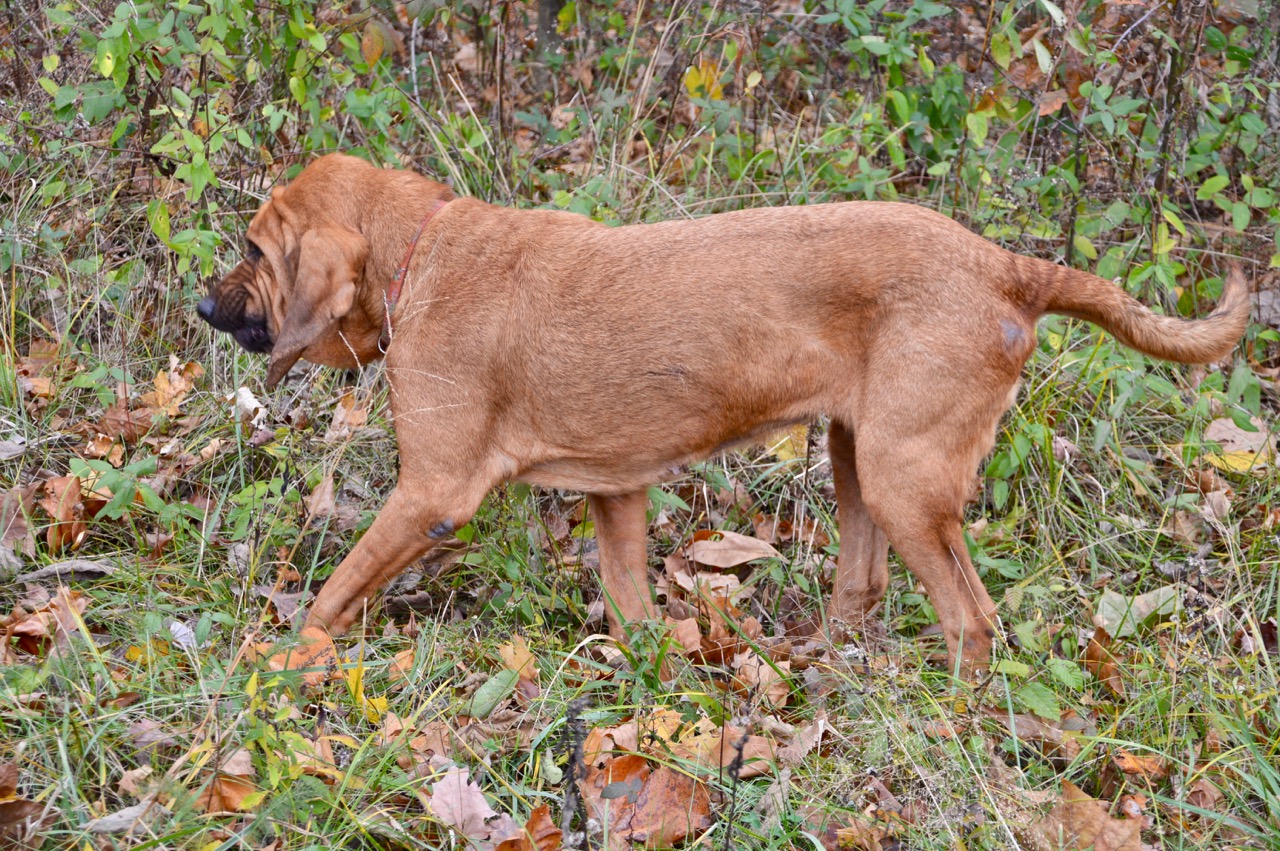 I kept looking back at Stella to see where she was. I had no doubt she would be lagging behind today. I didn't mind that, I just didn't want her to wander off into the woods and disappear for an hour or so. So I kept looking back in her direction as I walked. 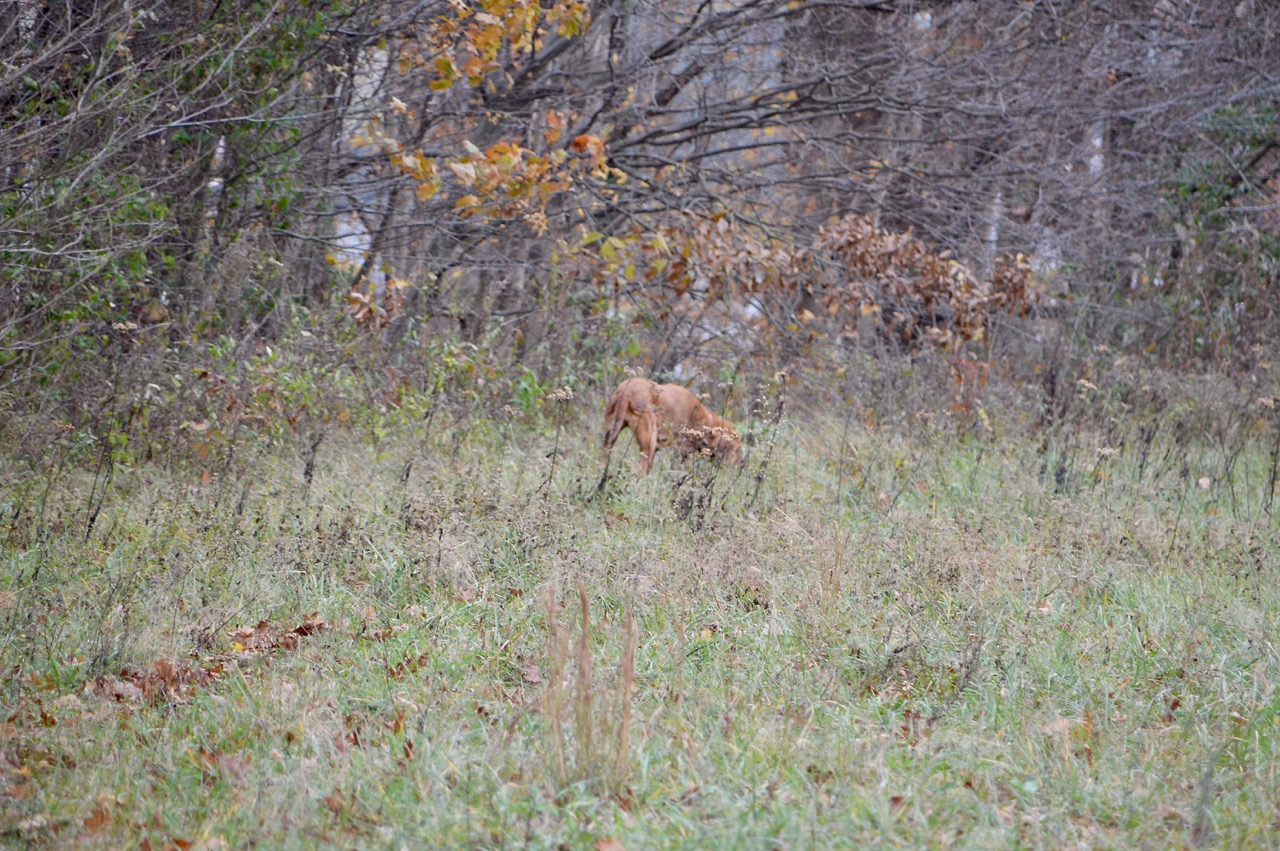 With Sadie doing her daily sprint around the first turn, I turned to look for Stella and at first I could not find her. I had to step a few steps to the right so I could see the full brush line ... then there she was running in our direction ... quite shocking. 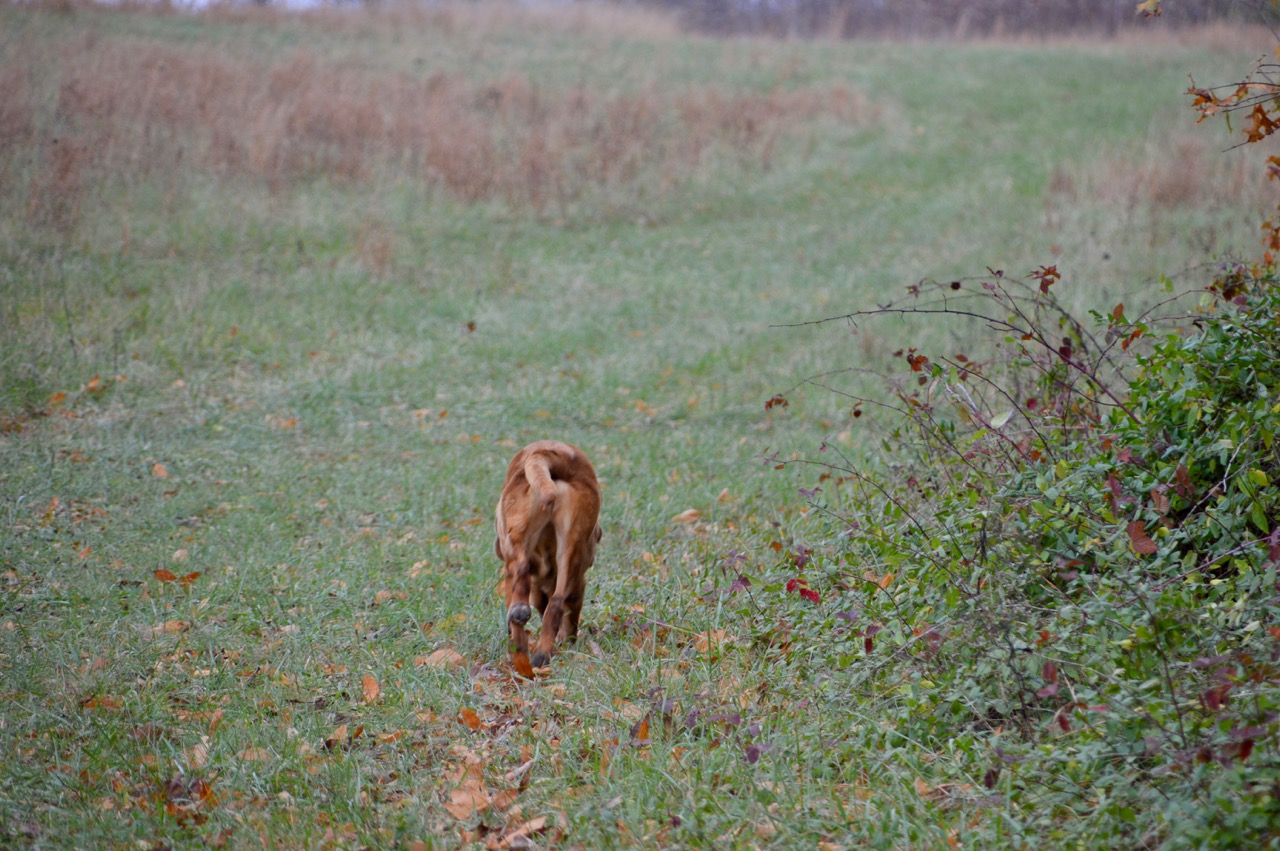 As I have said before, based on how she looked and acted last February / March time frame, seeing her running hard again is great to see. 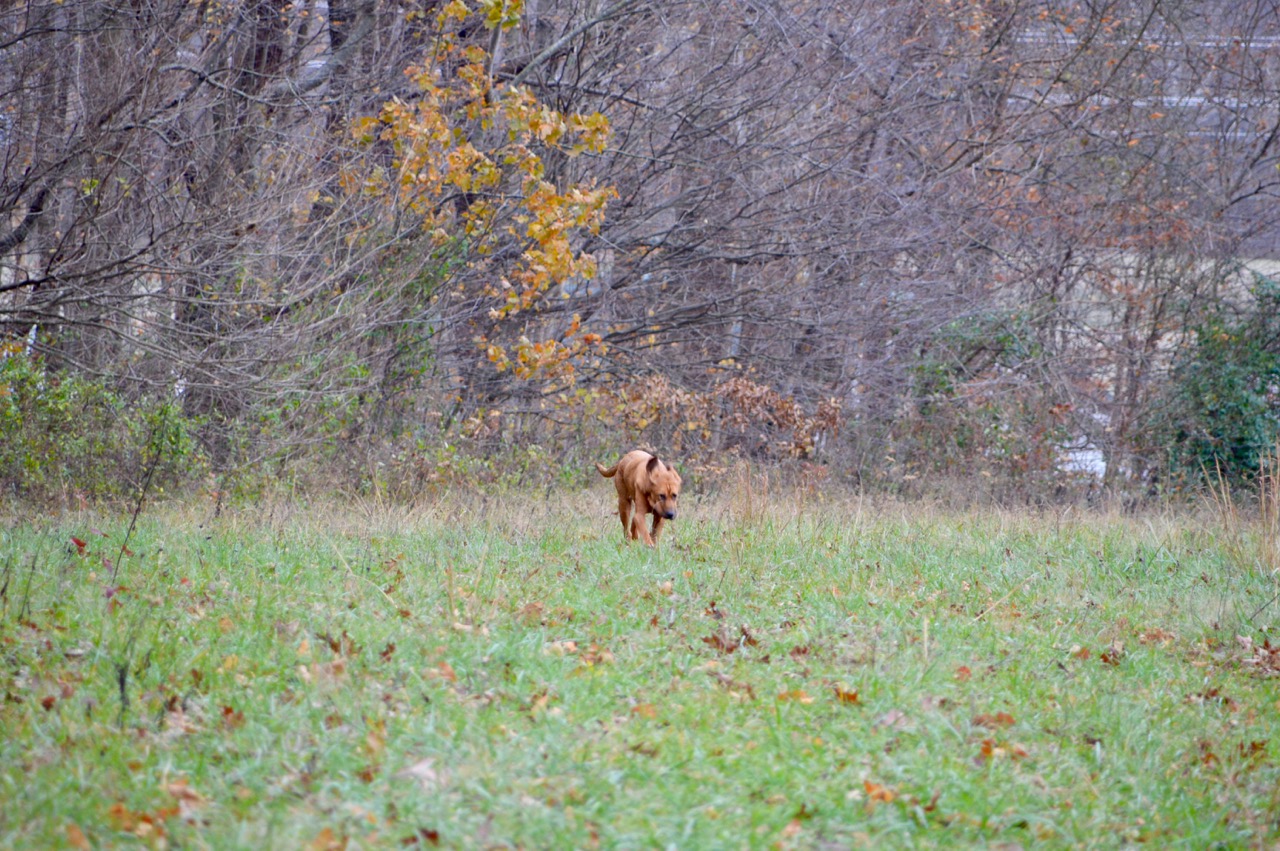 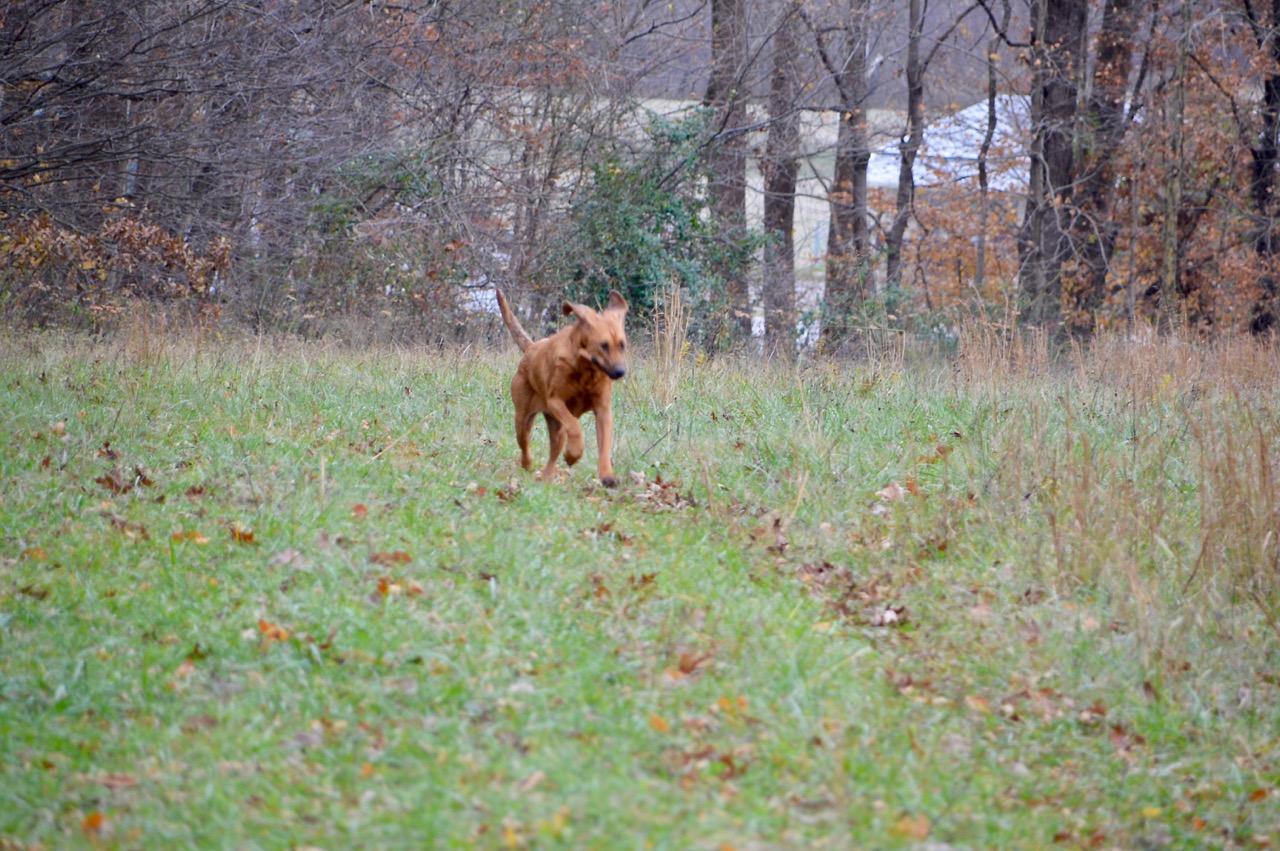 About the time I thought she was going to veer to my right, her left ... she ran right past me chasing Sadie. 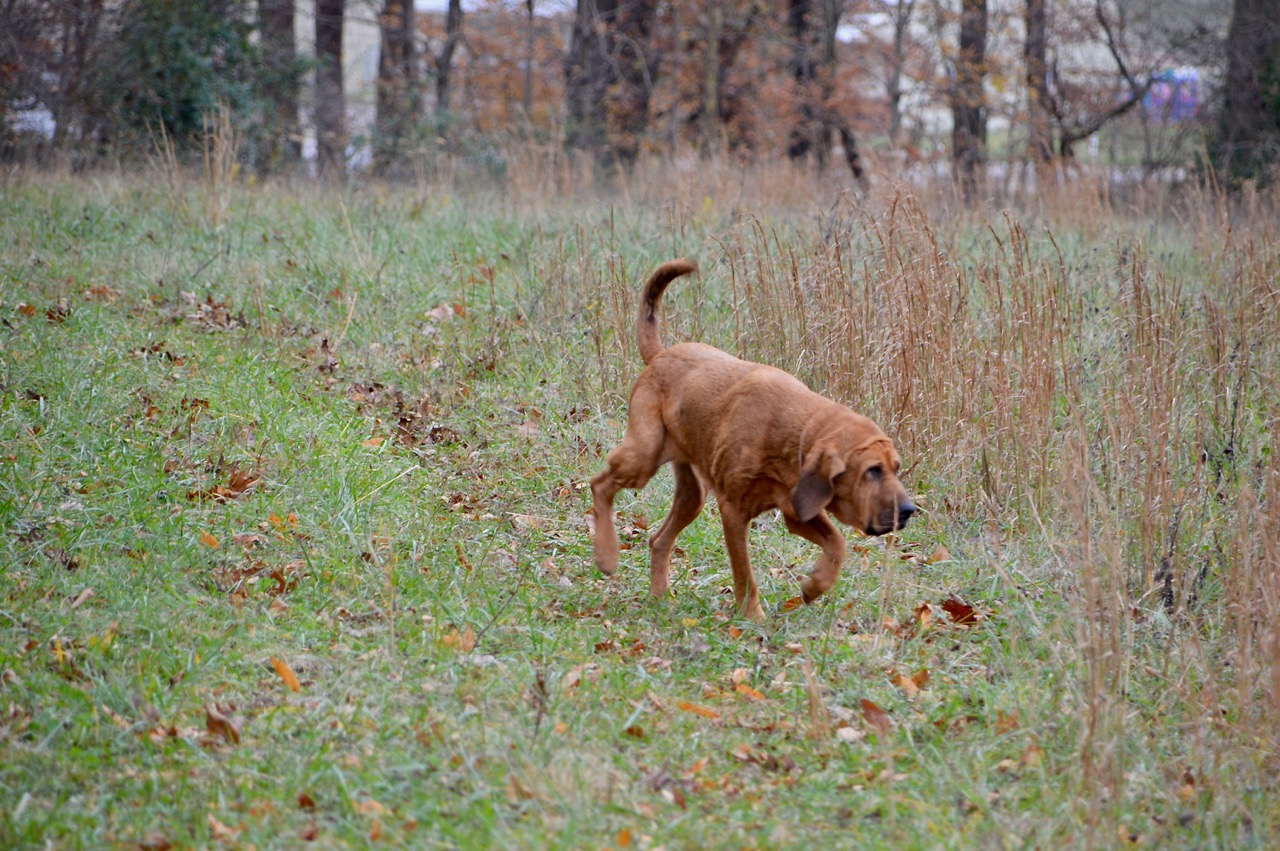 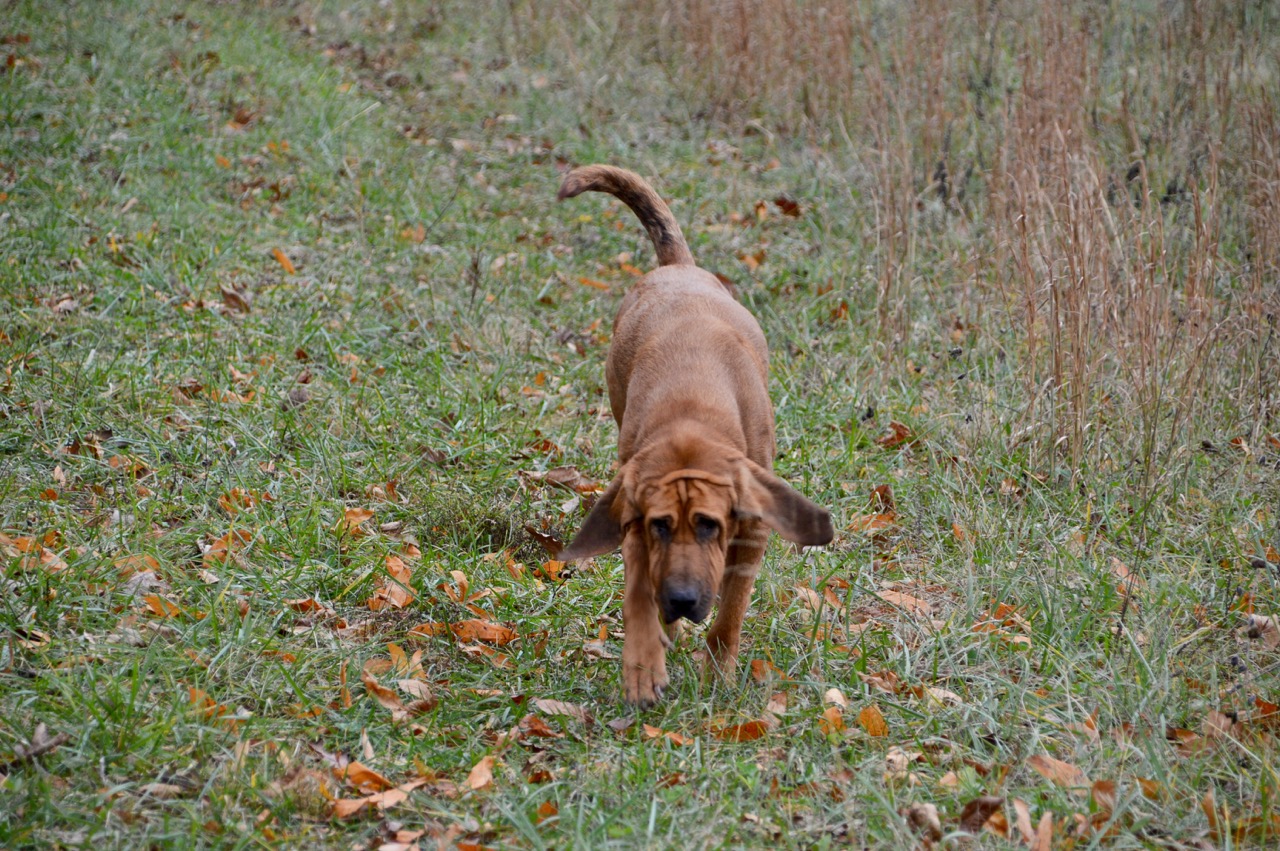 Sadie's jowls were so loud making that sound that only a bloodhound makes, I could hear them flapping with each inhale as she tracked the heavy brush. 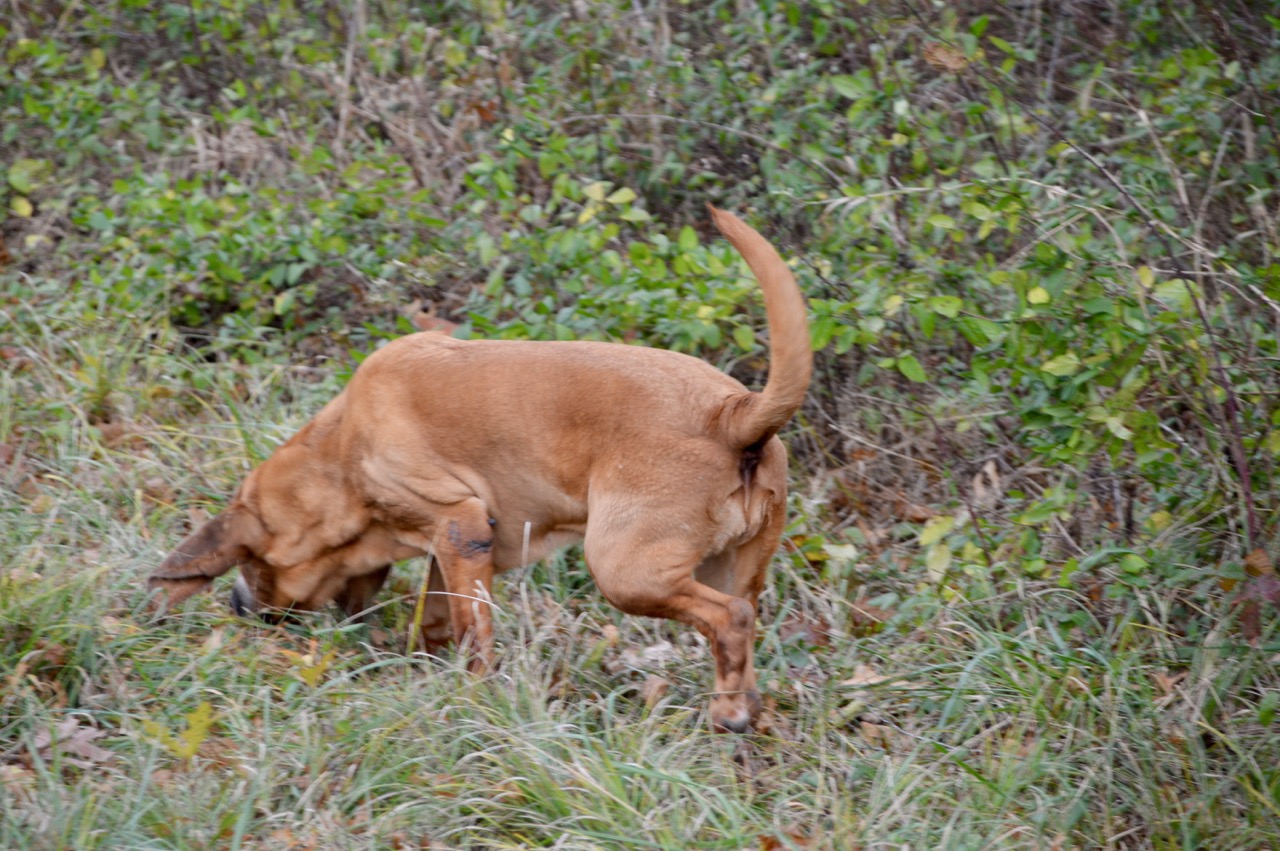 While Stella was adding protein this morning ... 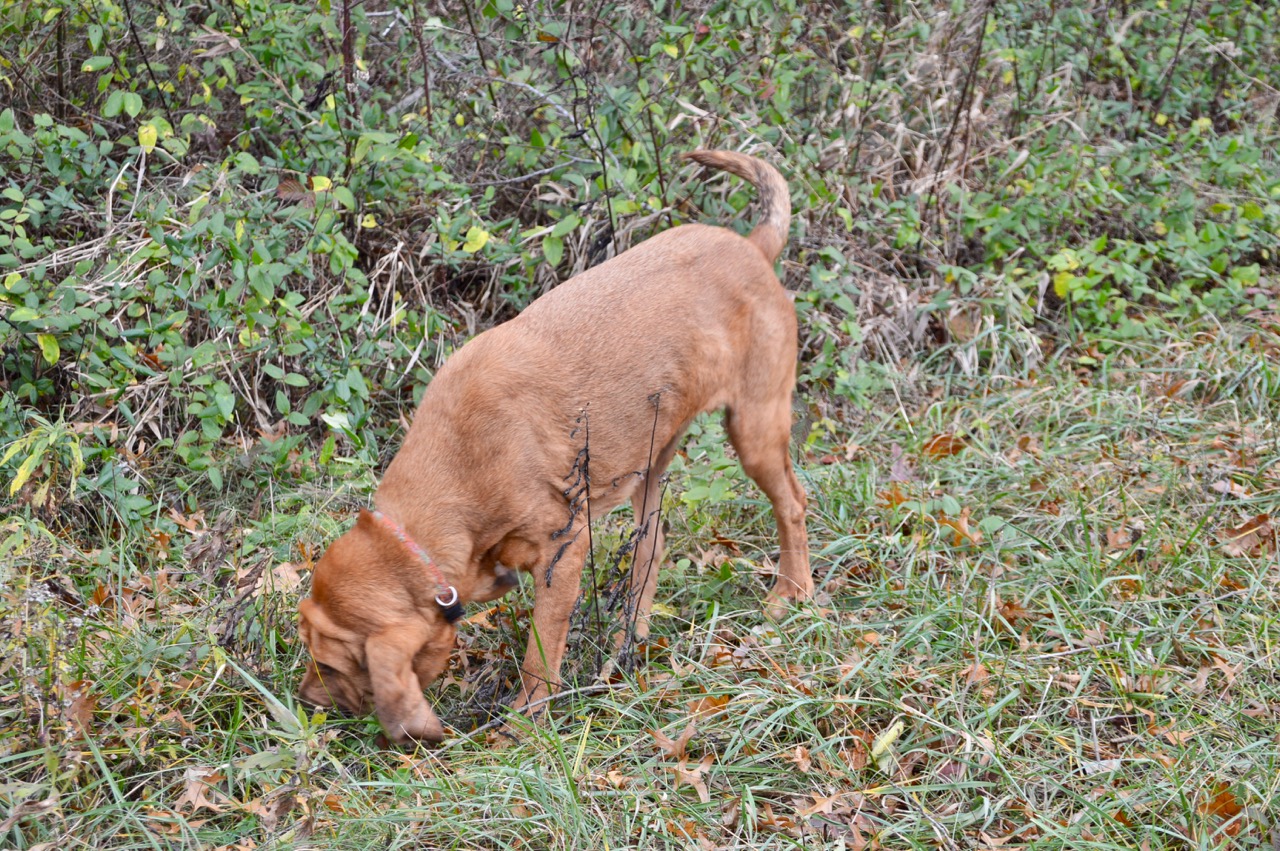 Sadie and I were rushing for the back of the field. It was getting colder the longer we walked. 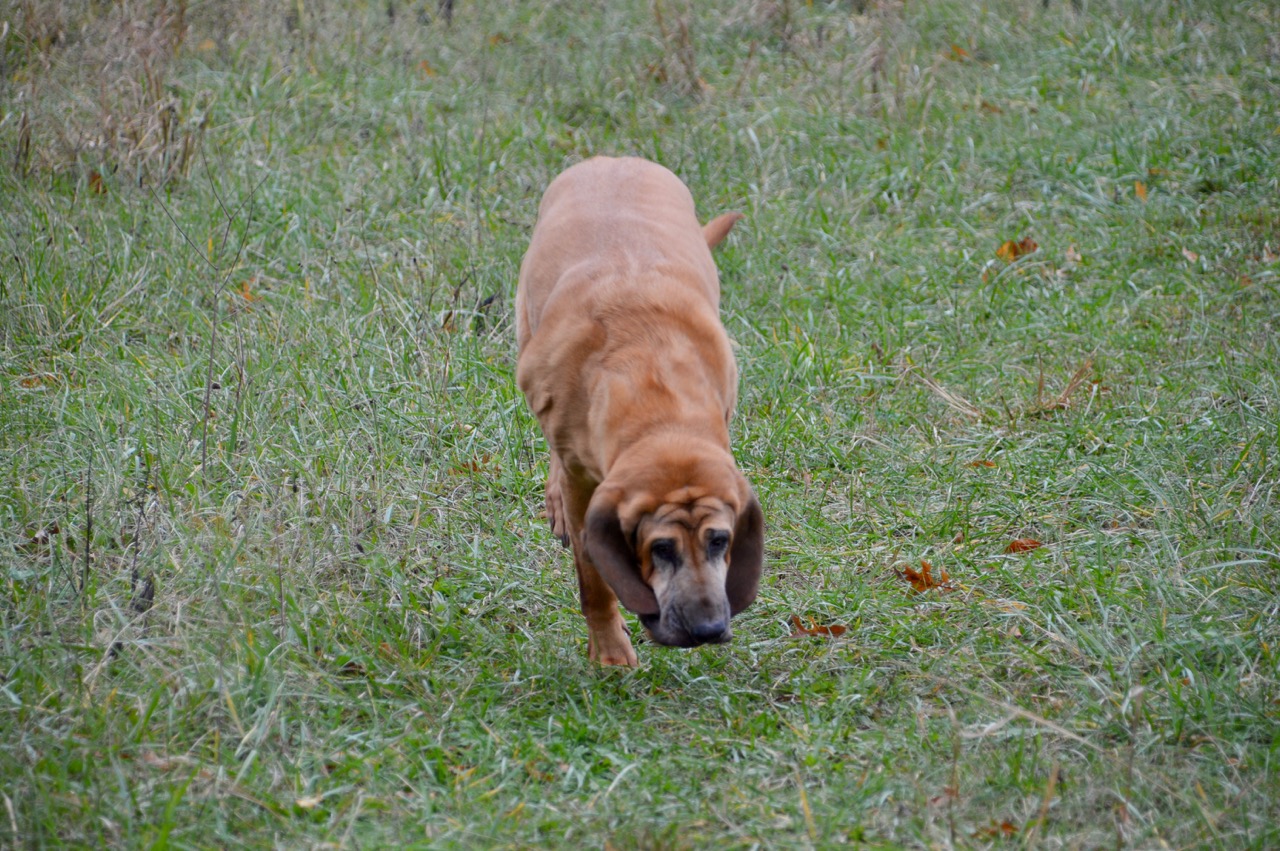 Once again Stella started running our direction. That's rare to see her run after us without being called. 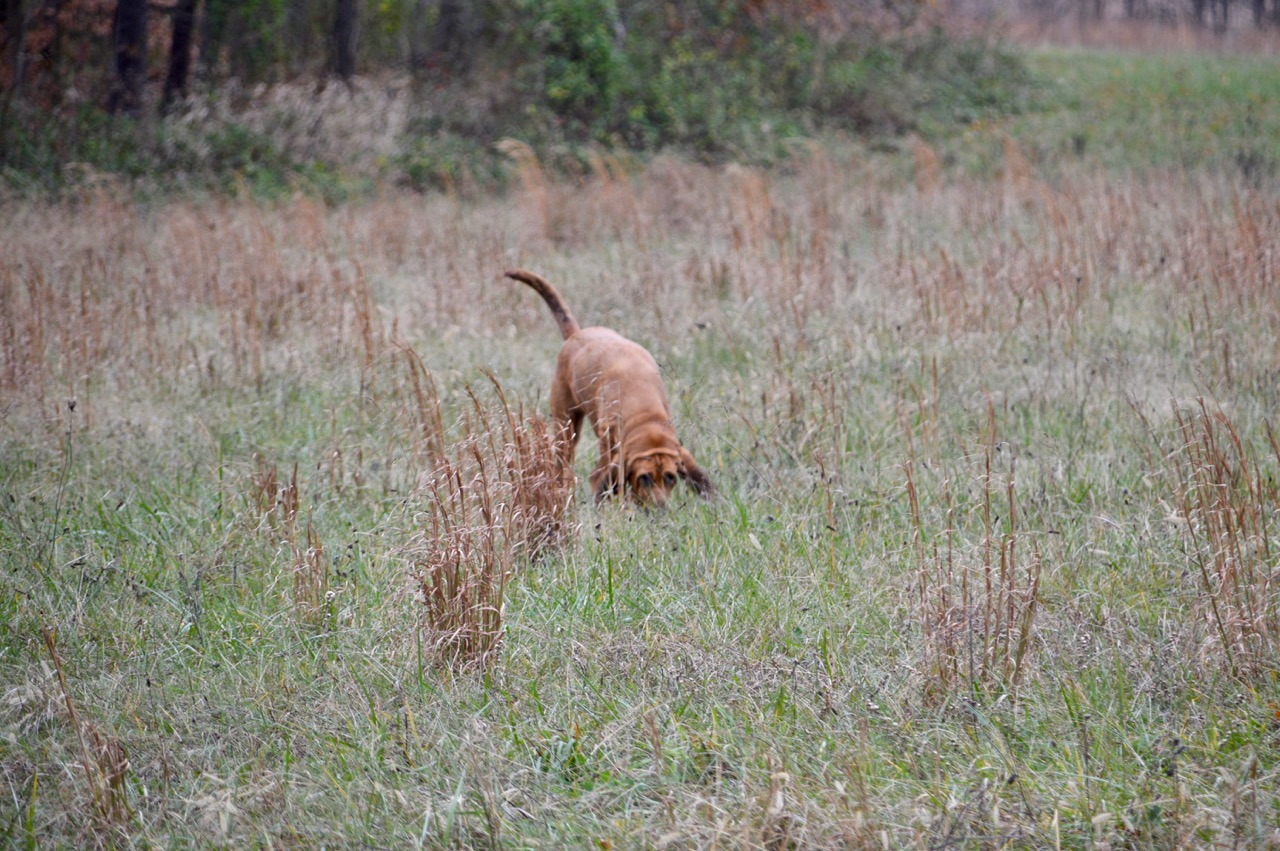 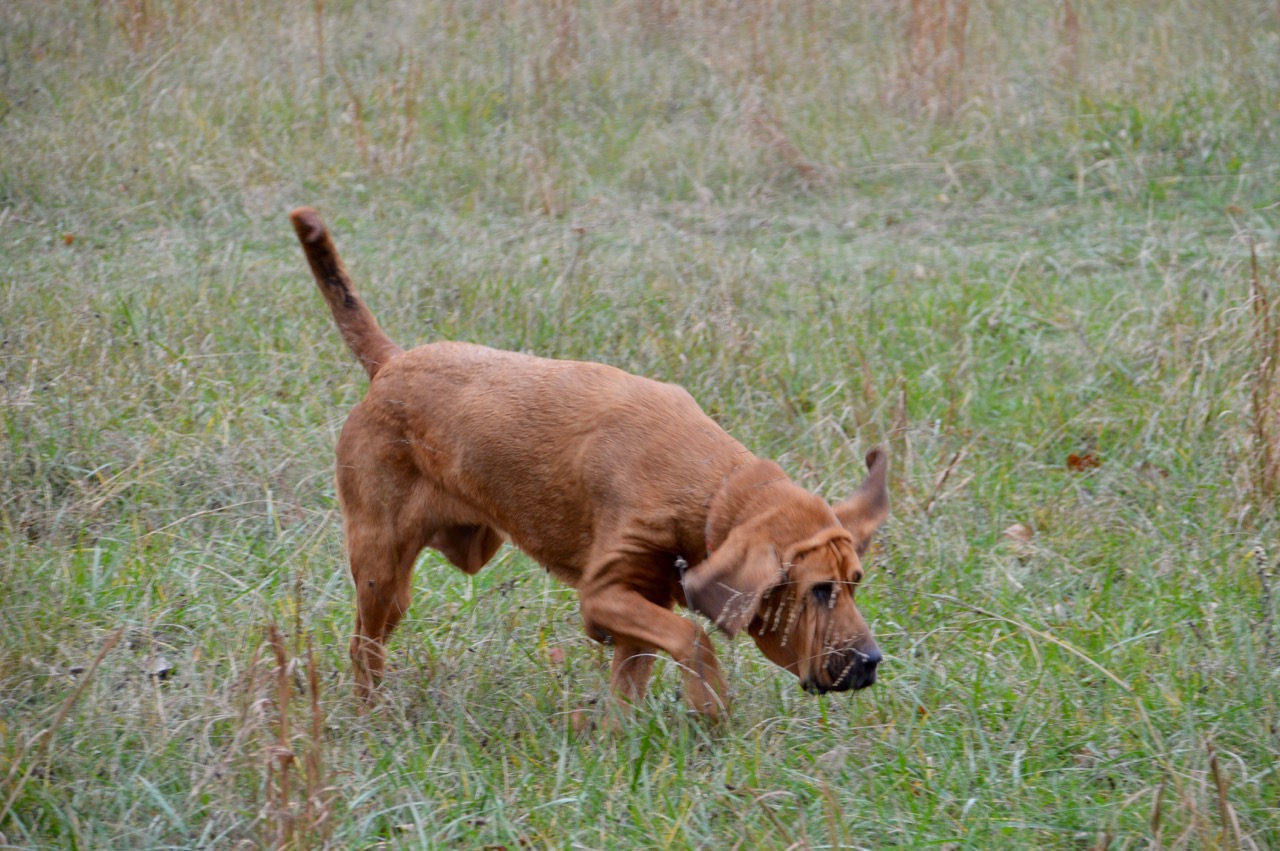 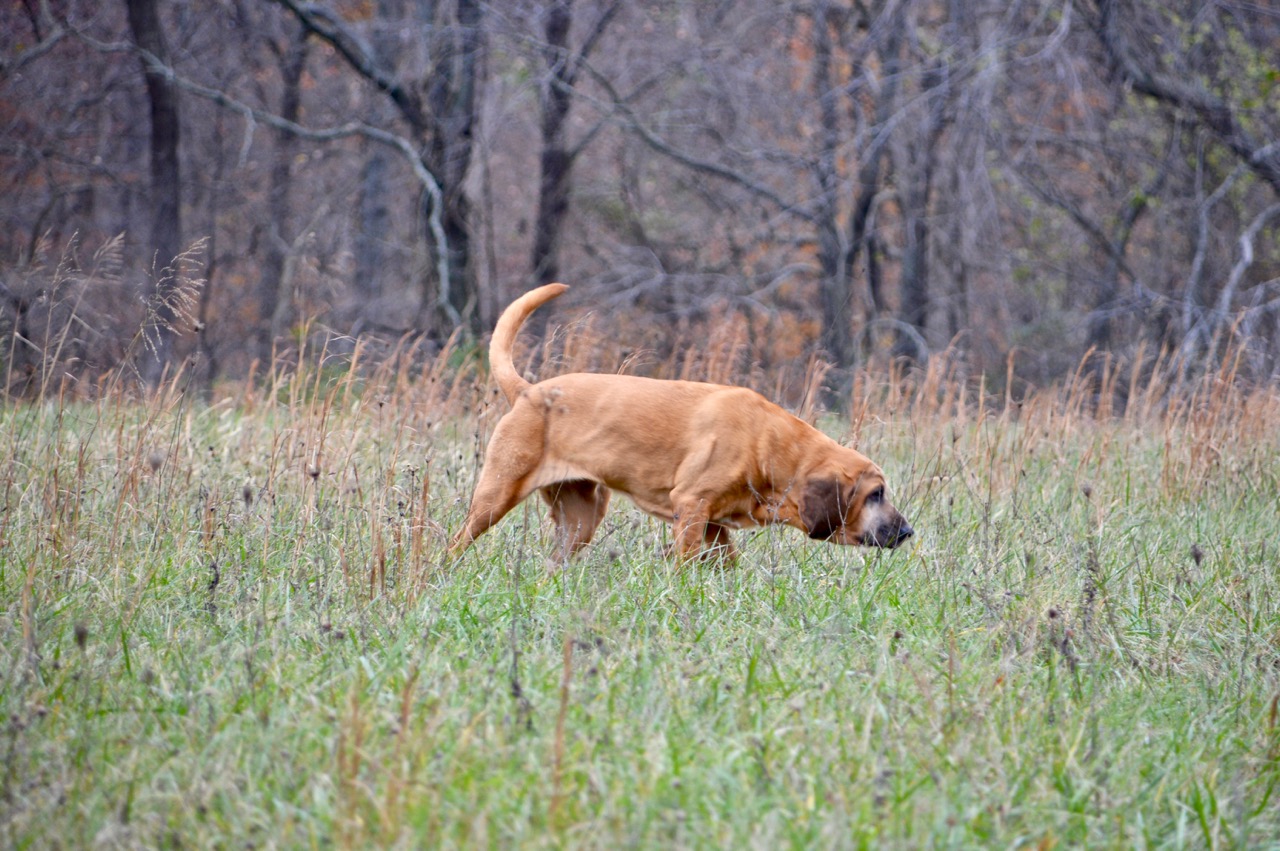 When they got to the area where we make the final turn, both hounds were going crazy with all the new scent they were smelling. They ran different directions, circled the area and zig zagged before turning and heading my direction. The deer must have hung out there a lot last night or early this morning. 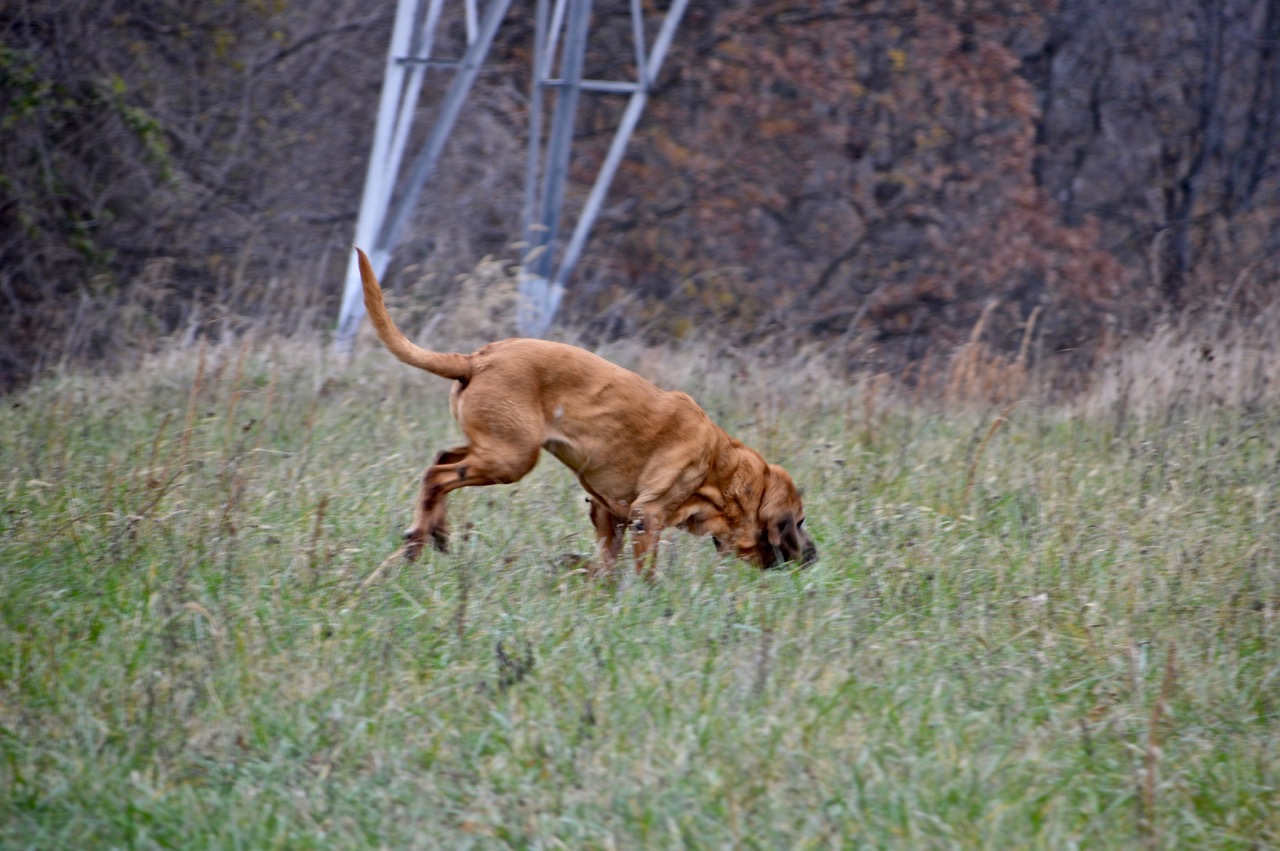 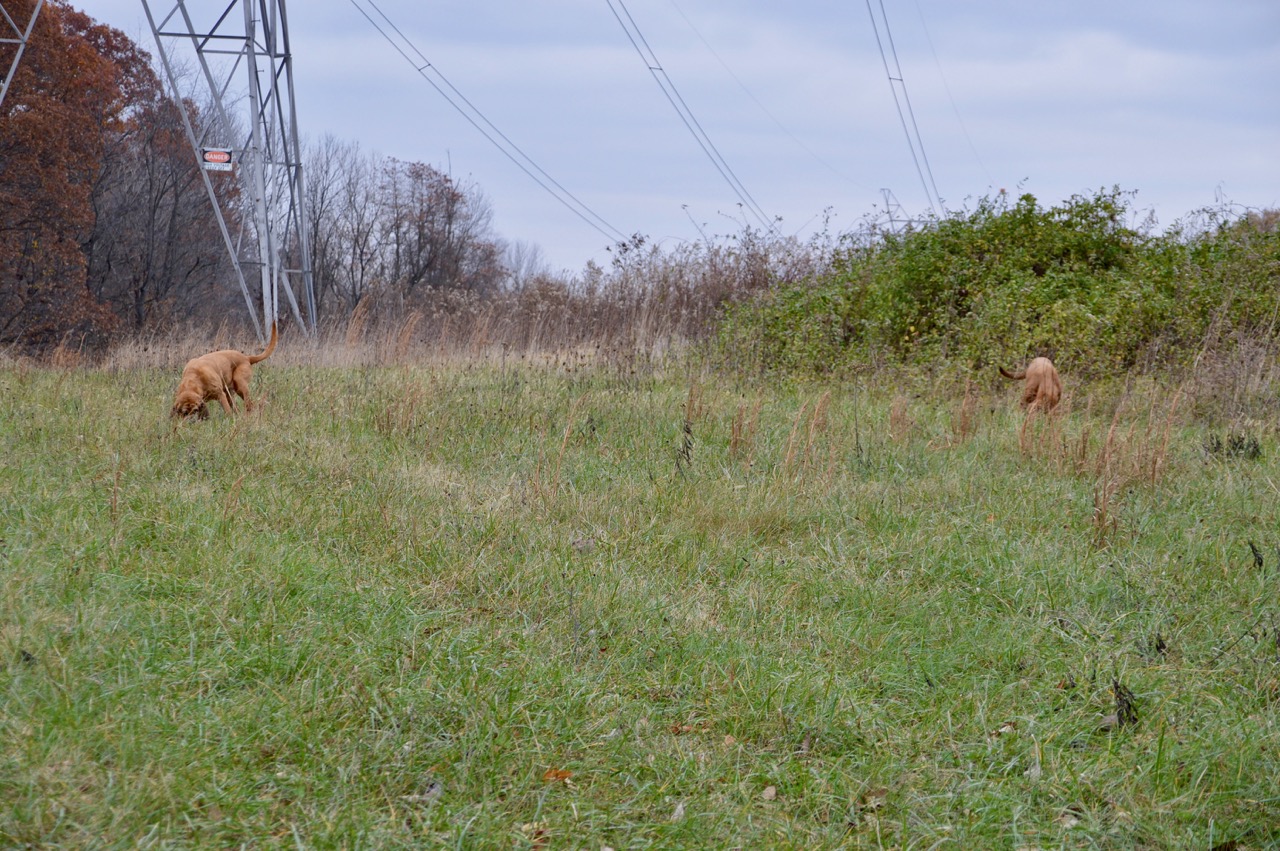 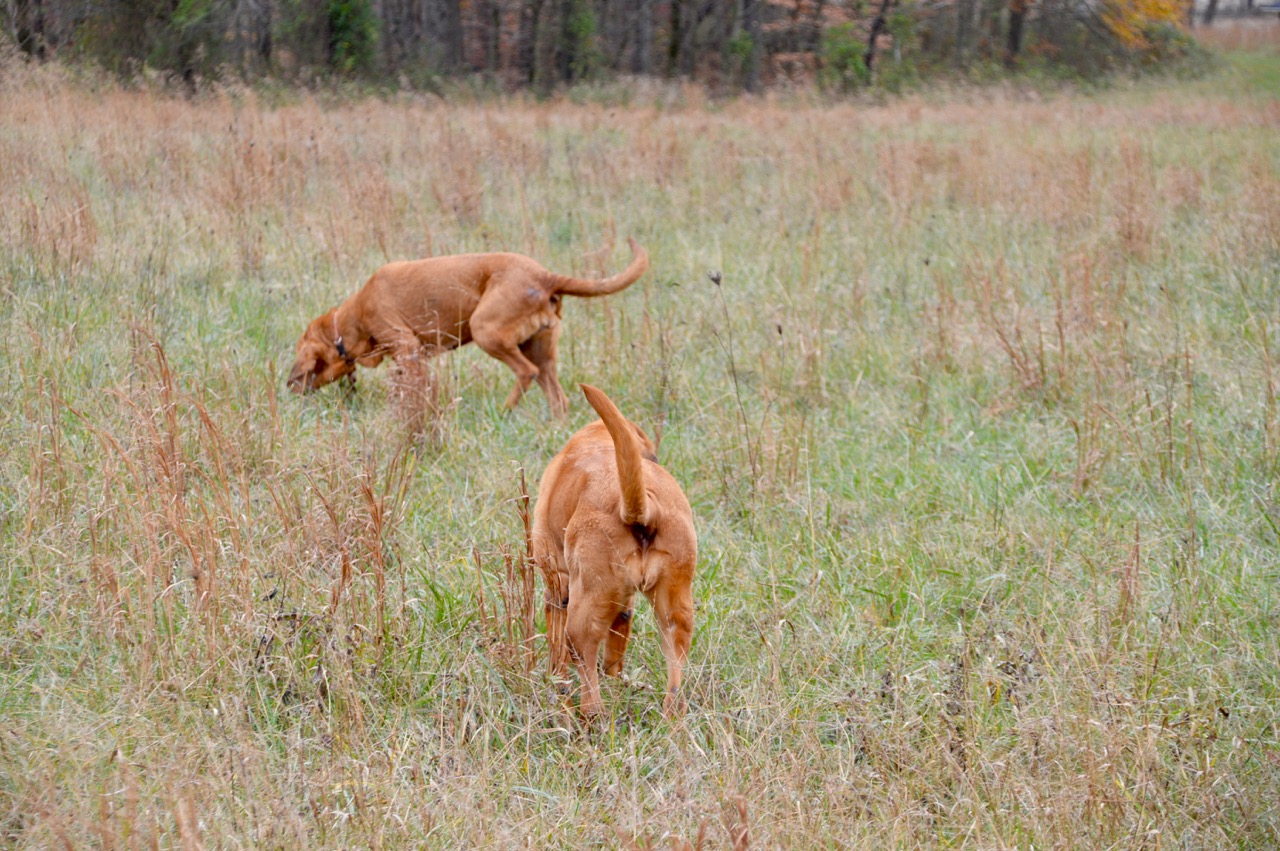 Then as fast as they changed their minds about tracking that area in the back of the field, they turned and sprinted past me ... not stopping until they were way ahead of me. They knew exactly where they were going and how they had to get there before I did. 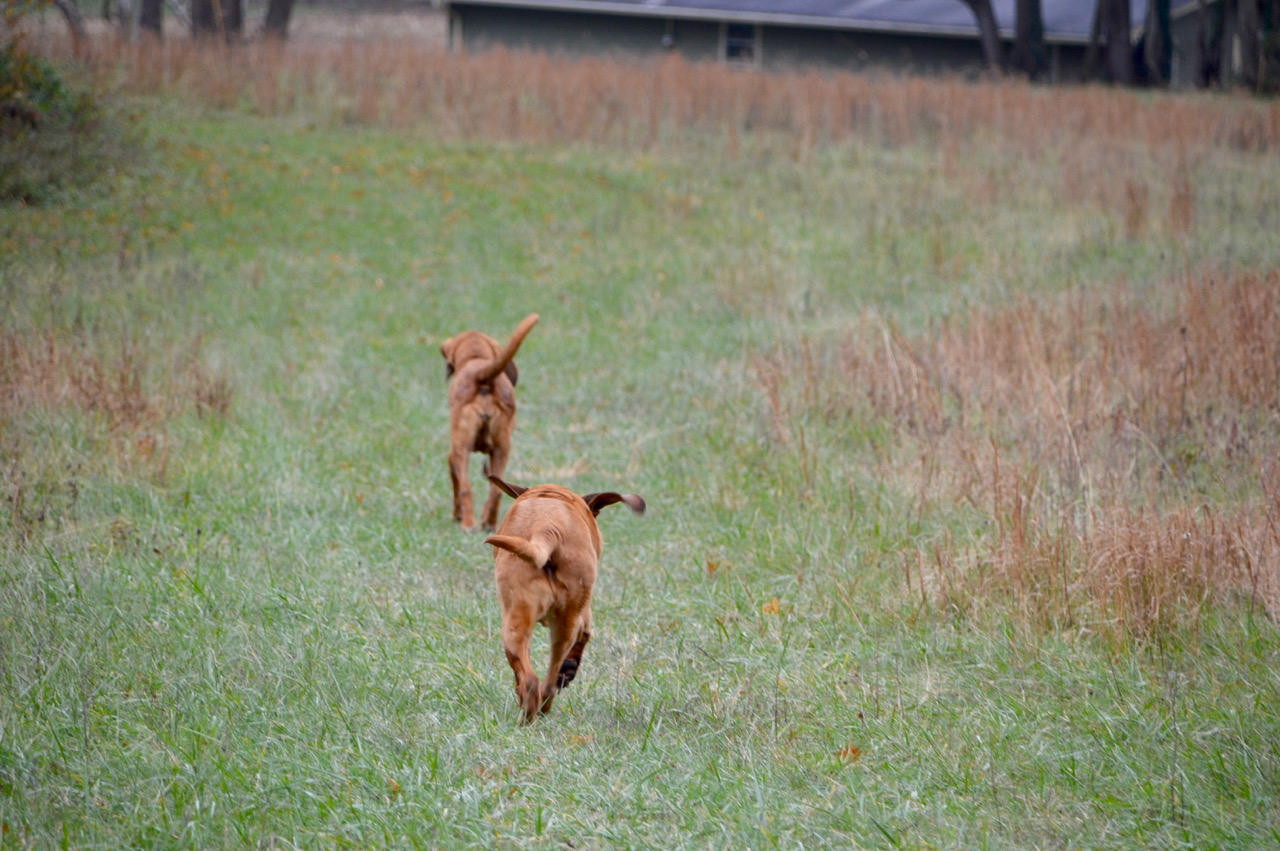 Here they are at a point of ignoring me every time I called their name. It was like I was nowhere in the field. 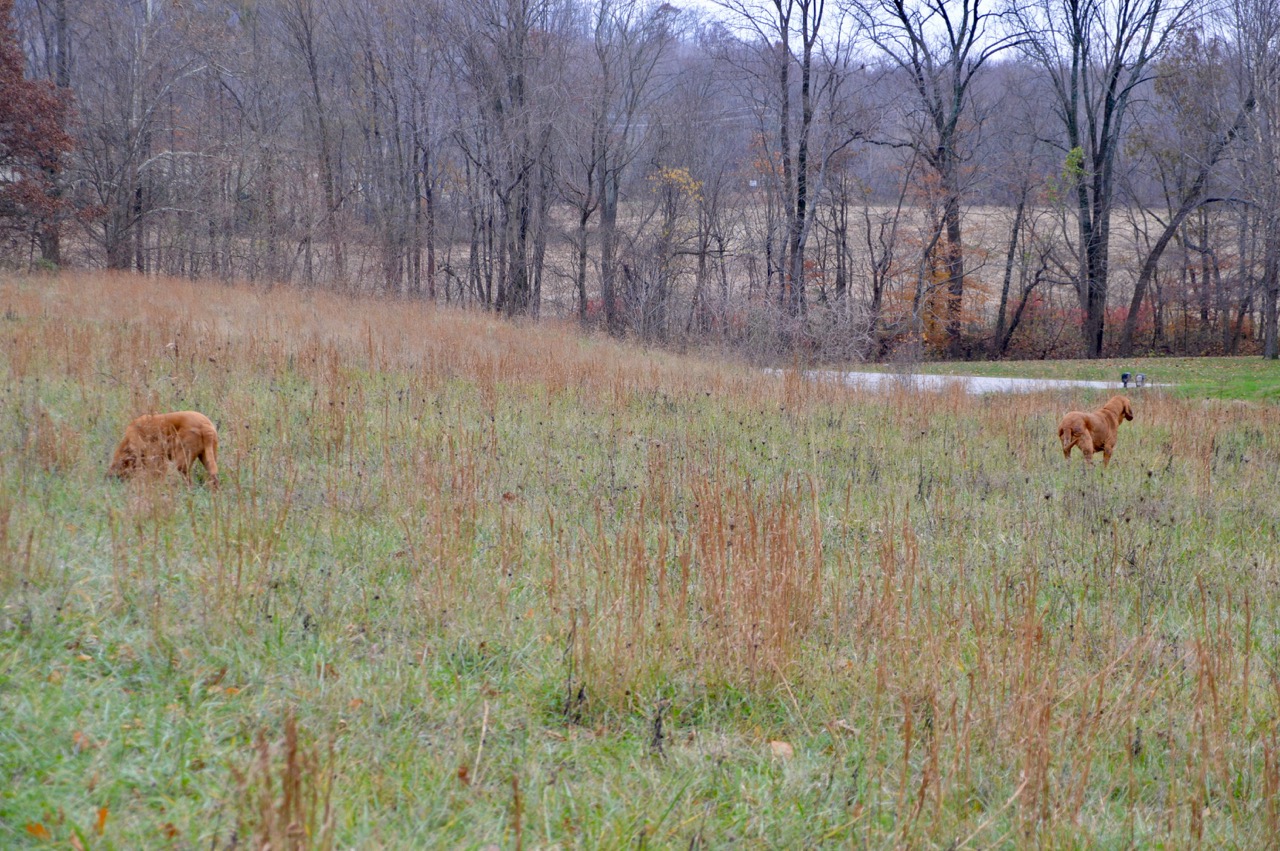 As I got closer to them, continuing to call their names, they both turned and slowly walked my direction. Another Sunday morning walk had been completed. 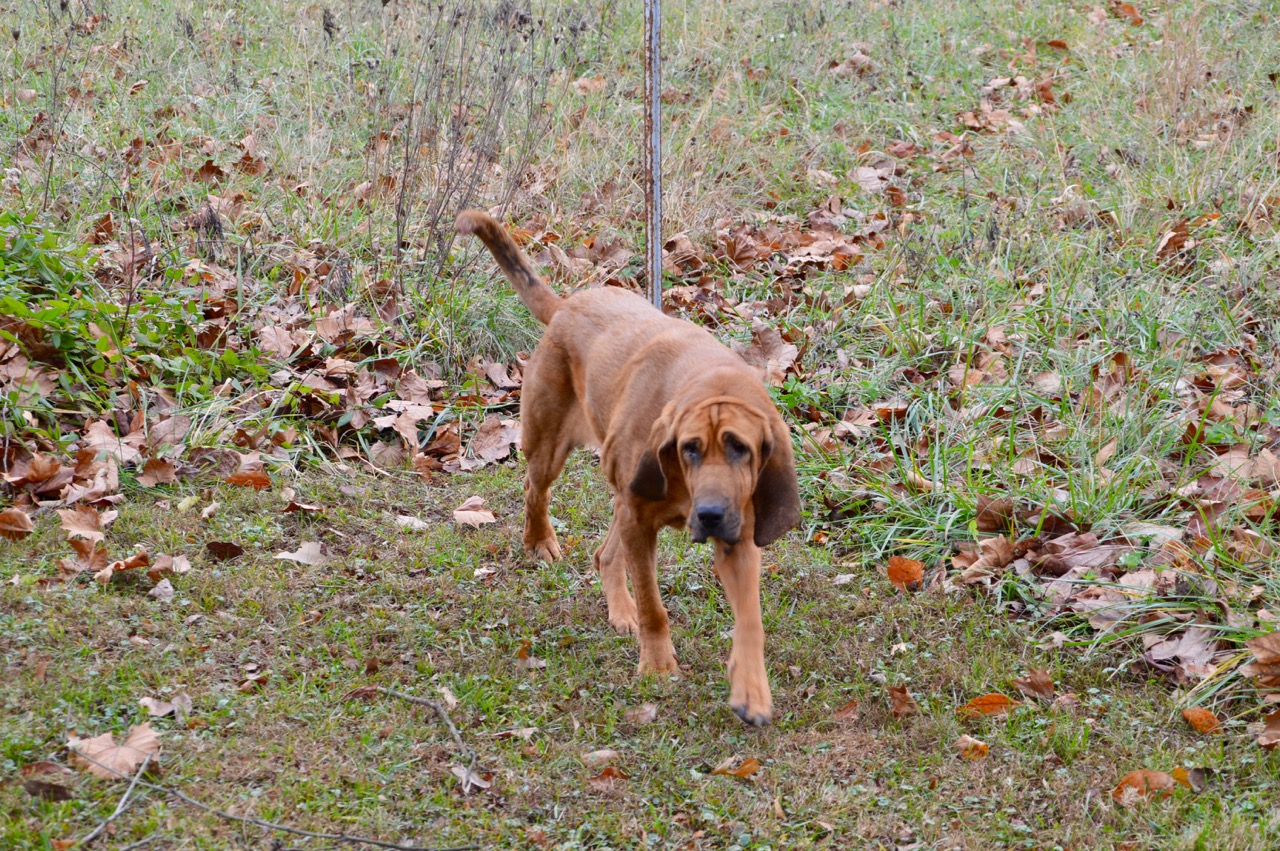 Another rare act ... both of them were ahead of me walking through the backyard toward the house. Then just about the time I thought Stella would turn into the carport, she glanced back at Sadie with plans of attacking her for a short period of wrestling. That's another good sign to see compare to her last February/March. 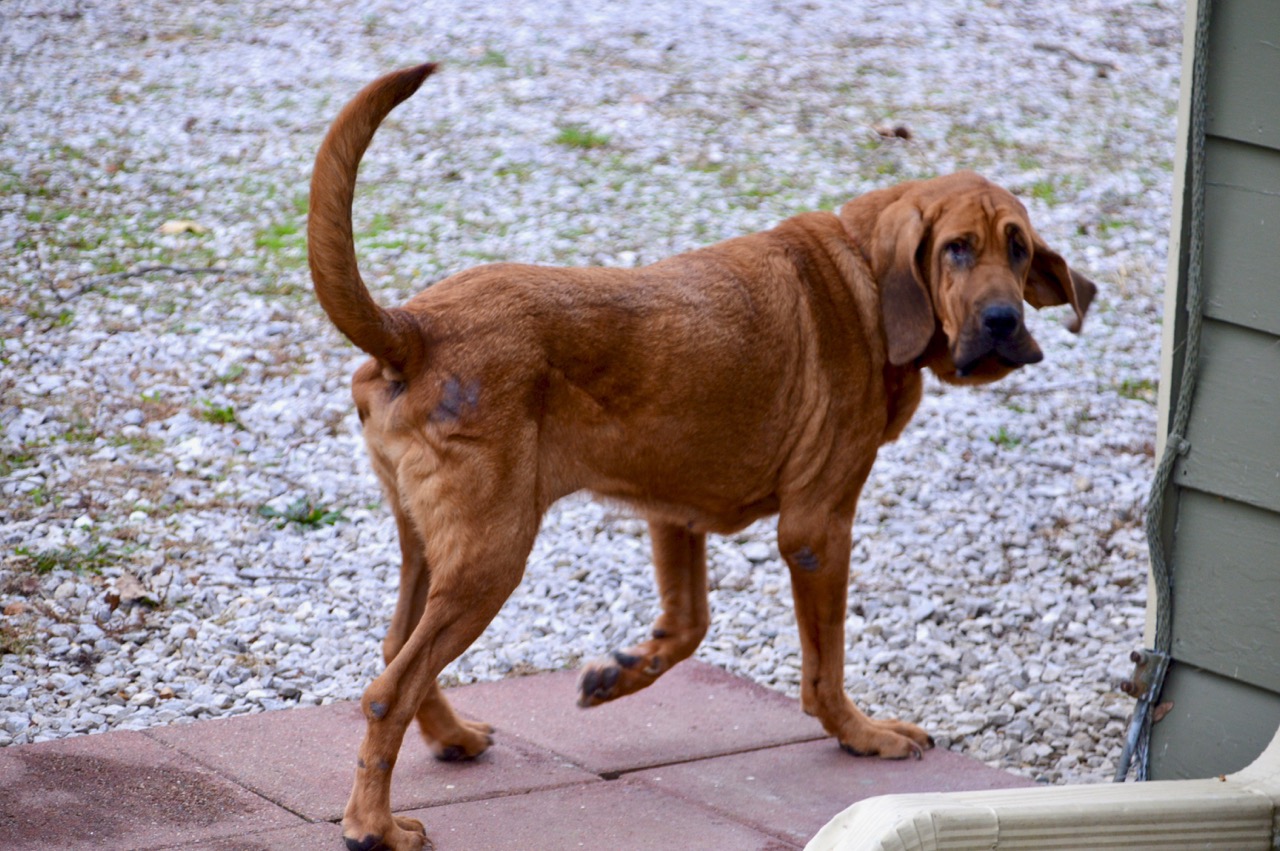 I'll let the pictures tell the story ... showing just how energized they were at the end of their 15 minute walk. 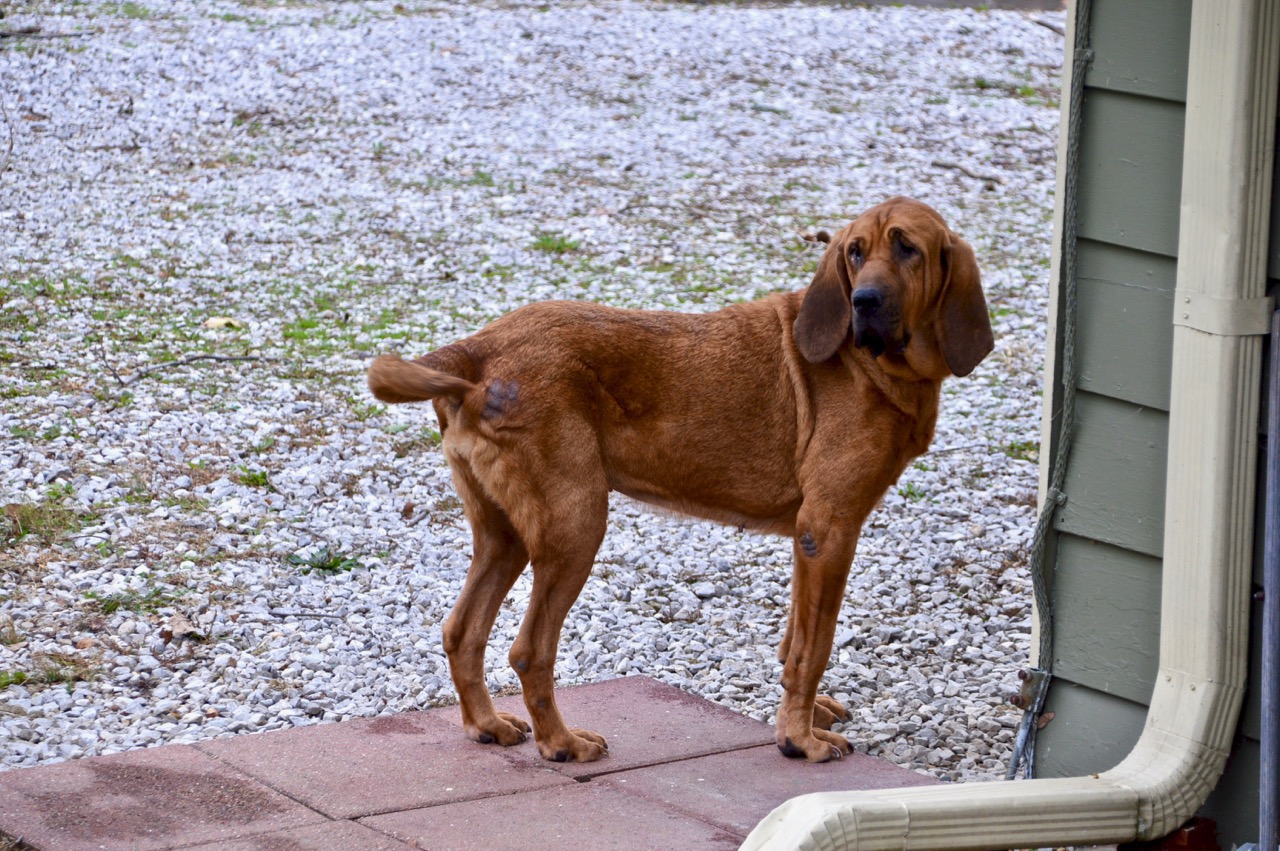 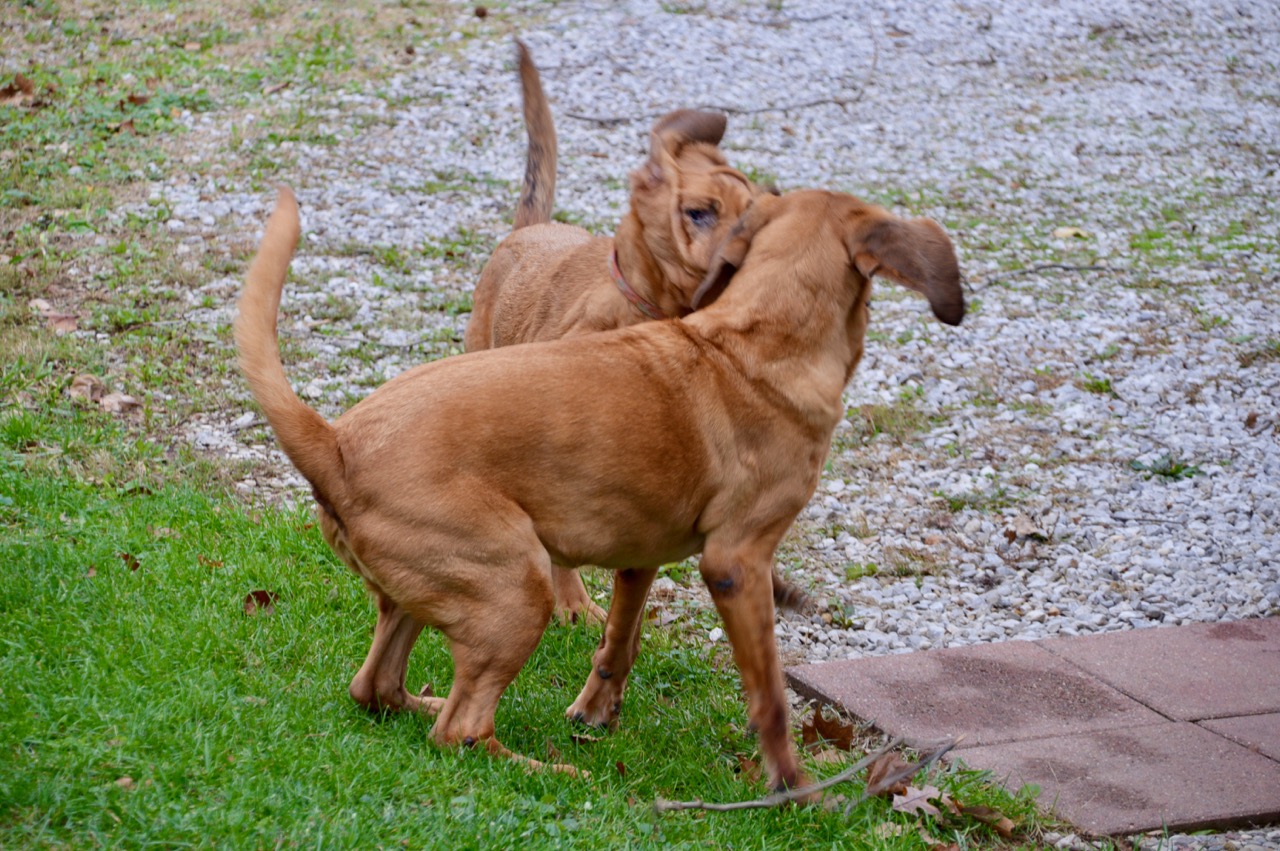 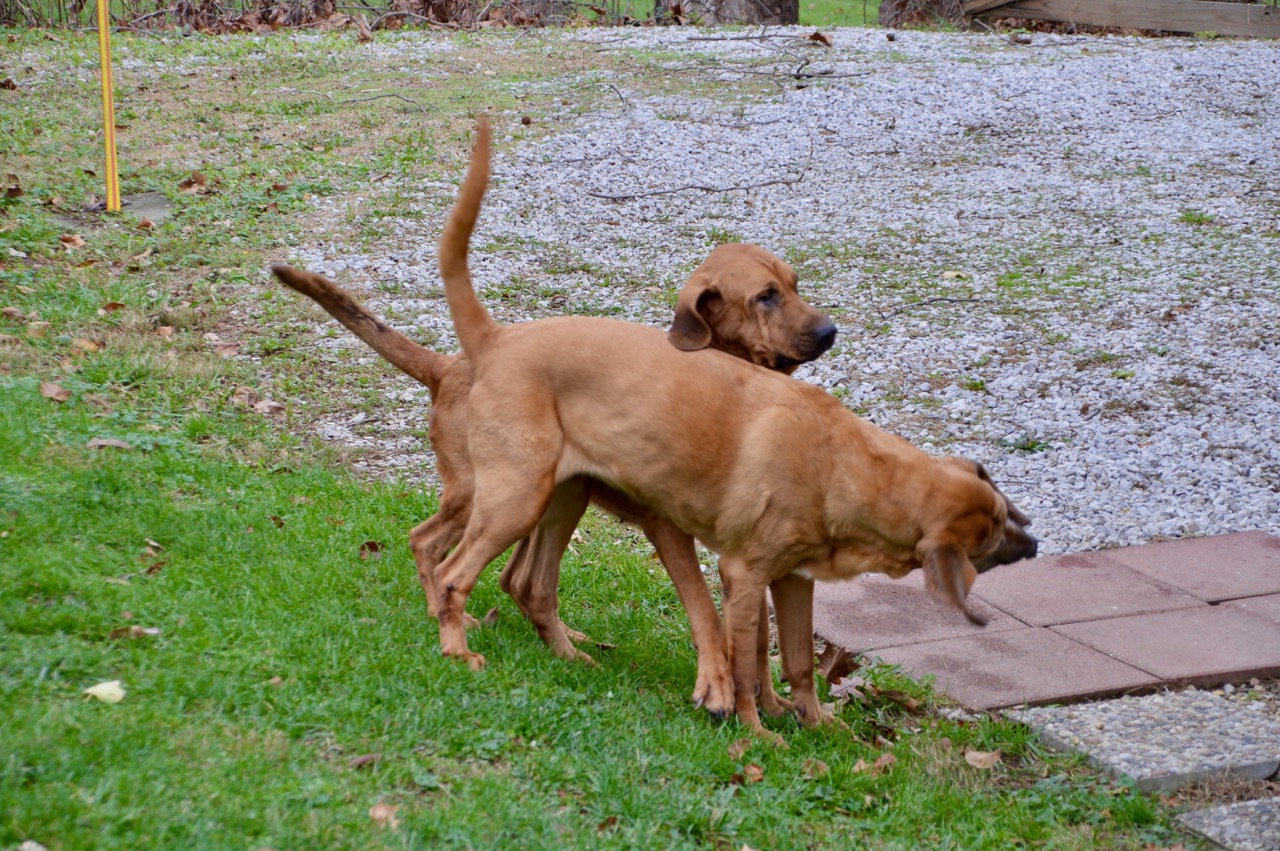 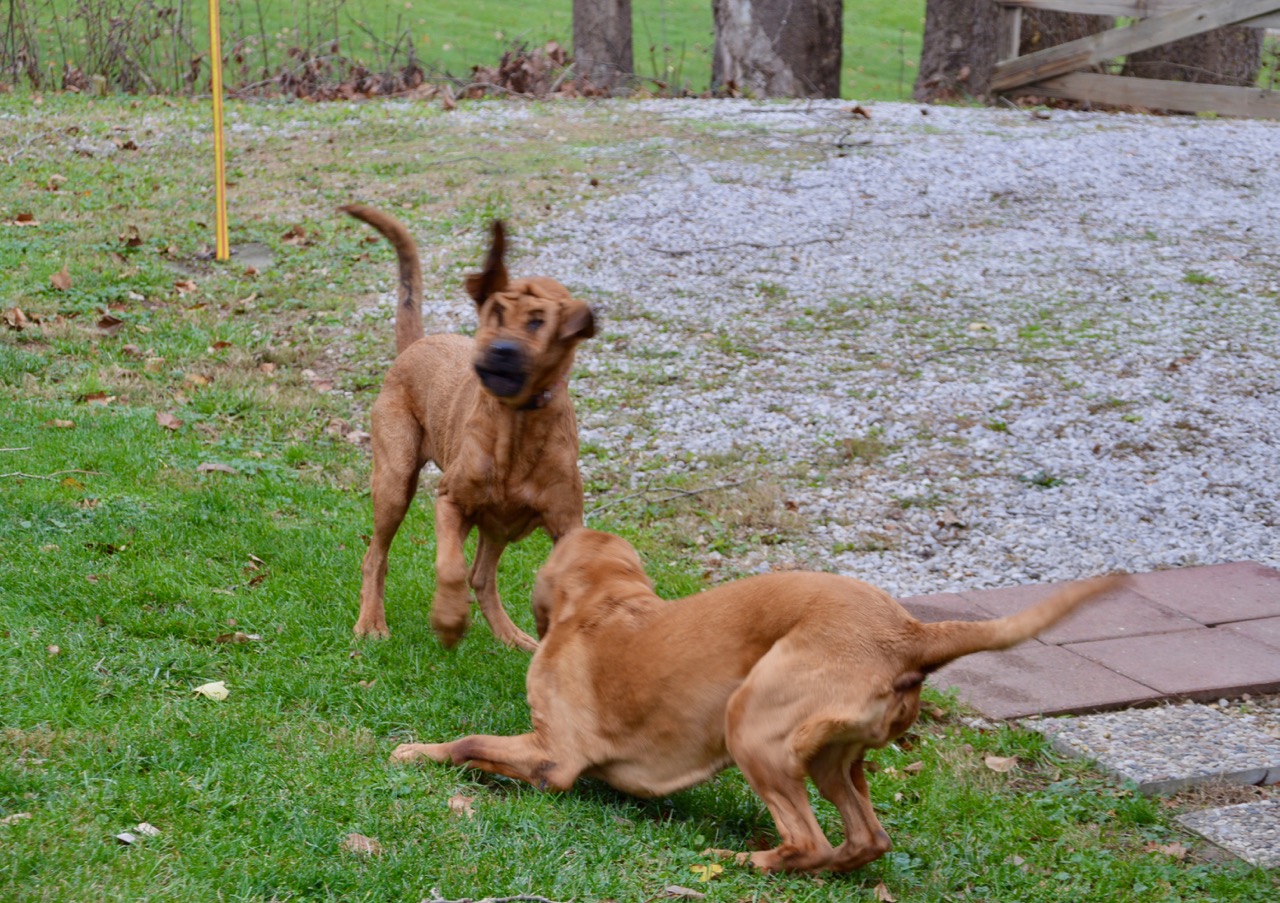 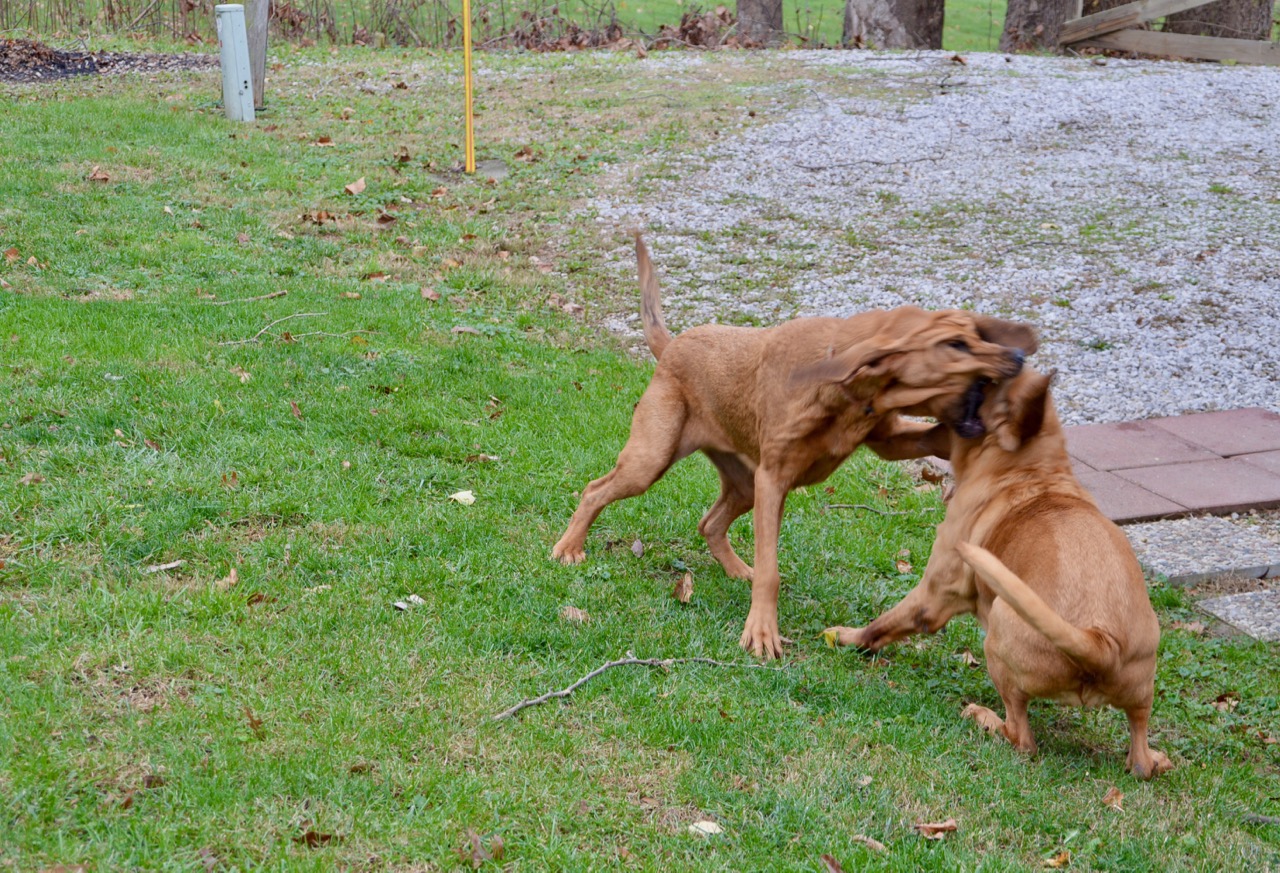 Here's a little closer look at that photo above. Although it looks like Stella is about to take off Sadie's ear ... there is never any growling, they never lose their temper and start a real fight ... it's all playful fun by two very big and very heavy bloodhounds. 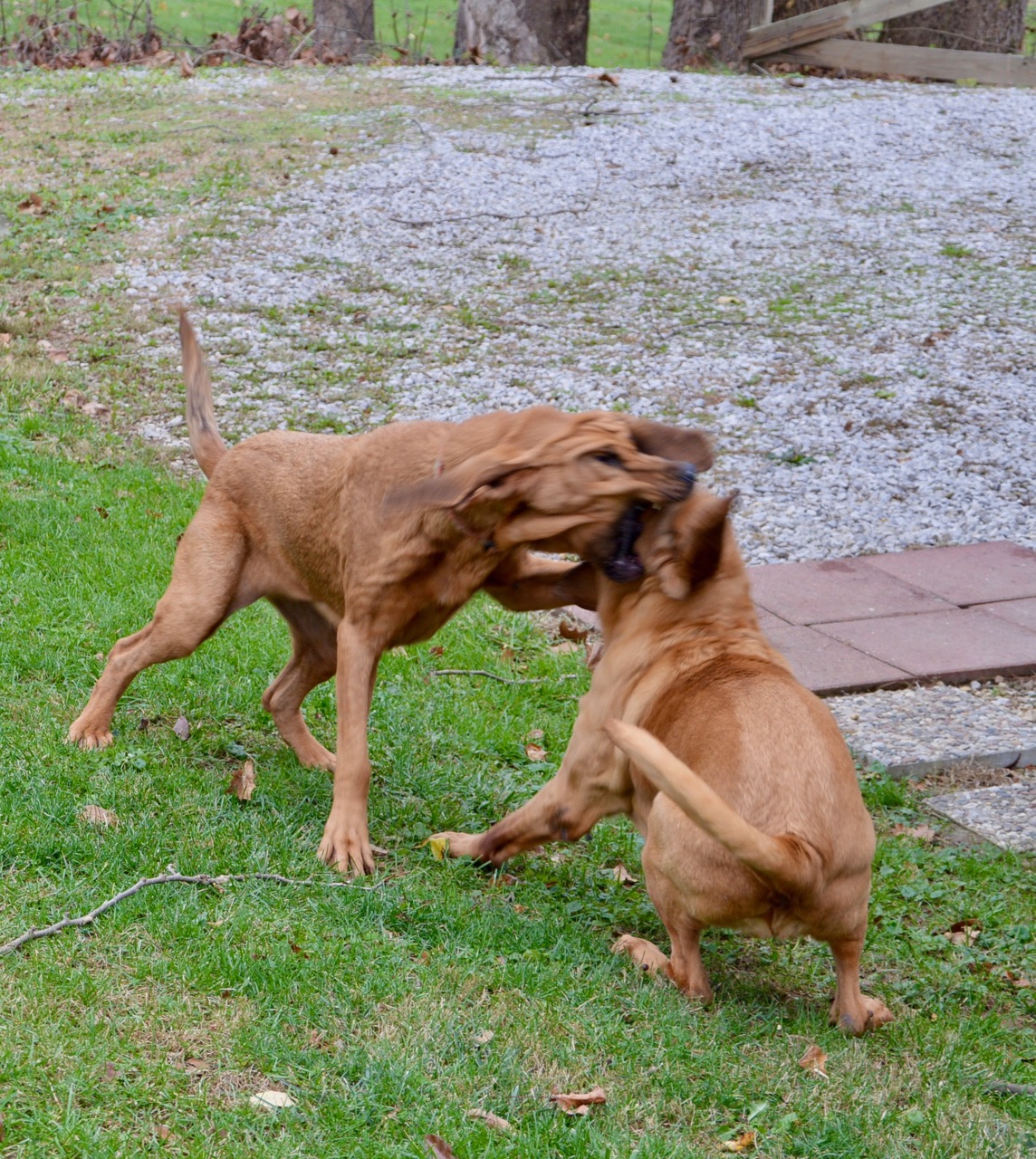 With the leaves gone and the raking project over, that blue trash can will be going back into the hidden corner of the carport today until I need to use it for yard maintenance again. With the high winds and storms Saturday afternoon I have a lot of tree limbs to pick up and start the new burn pile for next  spring.

Sadie makes her last move toward ending the wrestling match. 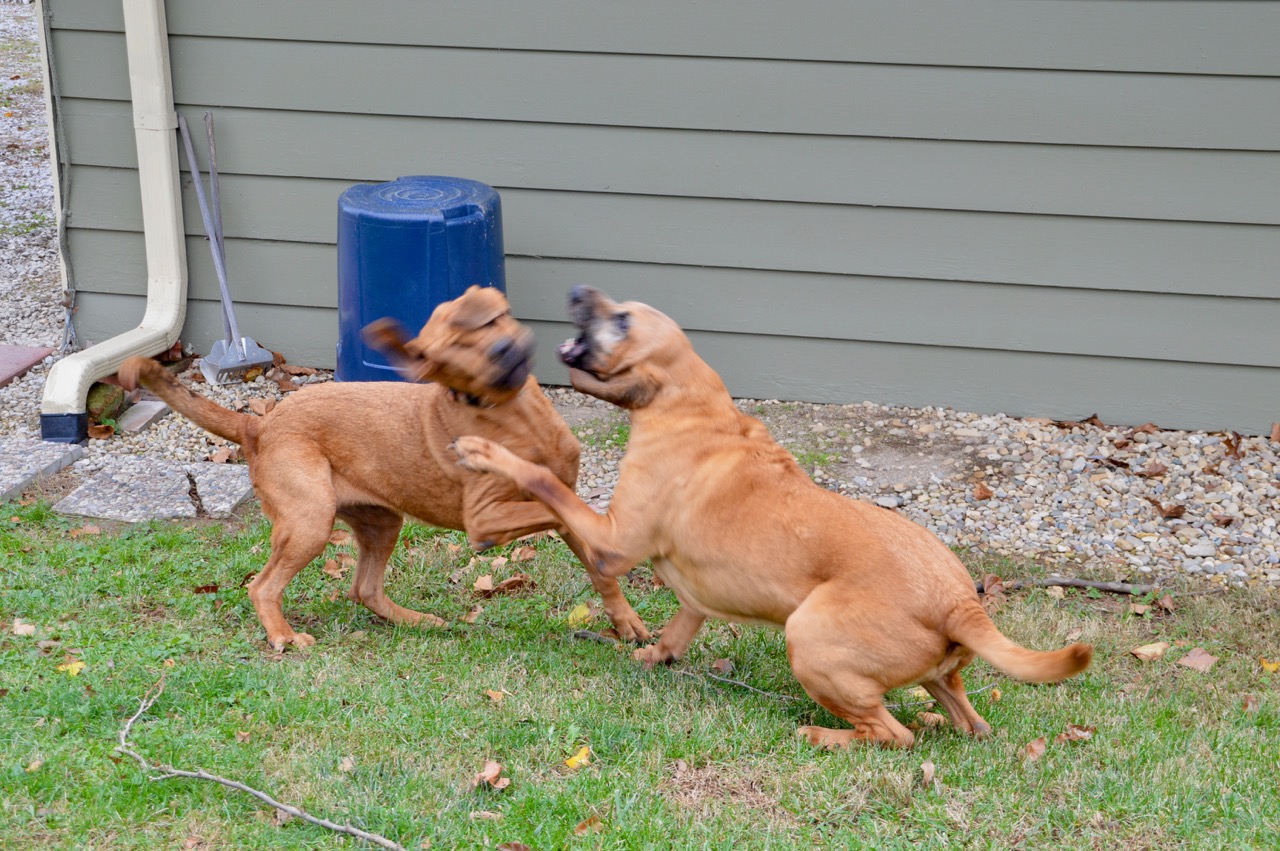 Another late start to the day today. The hounds hound their breakfast at their normal time but after 14 hours straight of watching college football on Saturday I had a late arrival to start the day, thus this blogging today. I'm not sure that any NFL games will be watched today. It's cold but I want to get outside and pick up all the small tree limbs out of the yard, close my three vents in the foundation that  lead to the crawl space.

I might even jack up the Z4 in preparation to starting the repair Monday or Tuesday depending on what time my parts arrive on Monday. I'll put the front of the car up on jack stands so I have enough room to crawl under it plus it's safer that way.

I am finding that November this year has been much colder than last year. The month is barely half over and I have used more electricity for heating the house than I did last year at this time. Yes, I do get that information from the spreadsheets I keep plus the updated electrical usage from my local utility company.

Since I am late posting this, I have two bloodhounds sitting quietly in the entrance to the computer room staring at me ... quietly begging for lunch ... quietly reminding me it's past noon and I am late serving their lunch time kibble. It's good to have live reminders plus the two hounds always get me walking  two to three times per day for some exercise.

I am find tuning my diet again ... but the official start might not happen until after Thanksgiving dinner on Thursday with left overs getting me through the weekend. Monday's always seem like the better day to make changes in anything.

It's cold but sunny today here in 'the tropics' of Southern Indiana.
at November 19, 2017