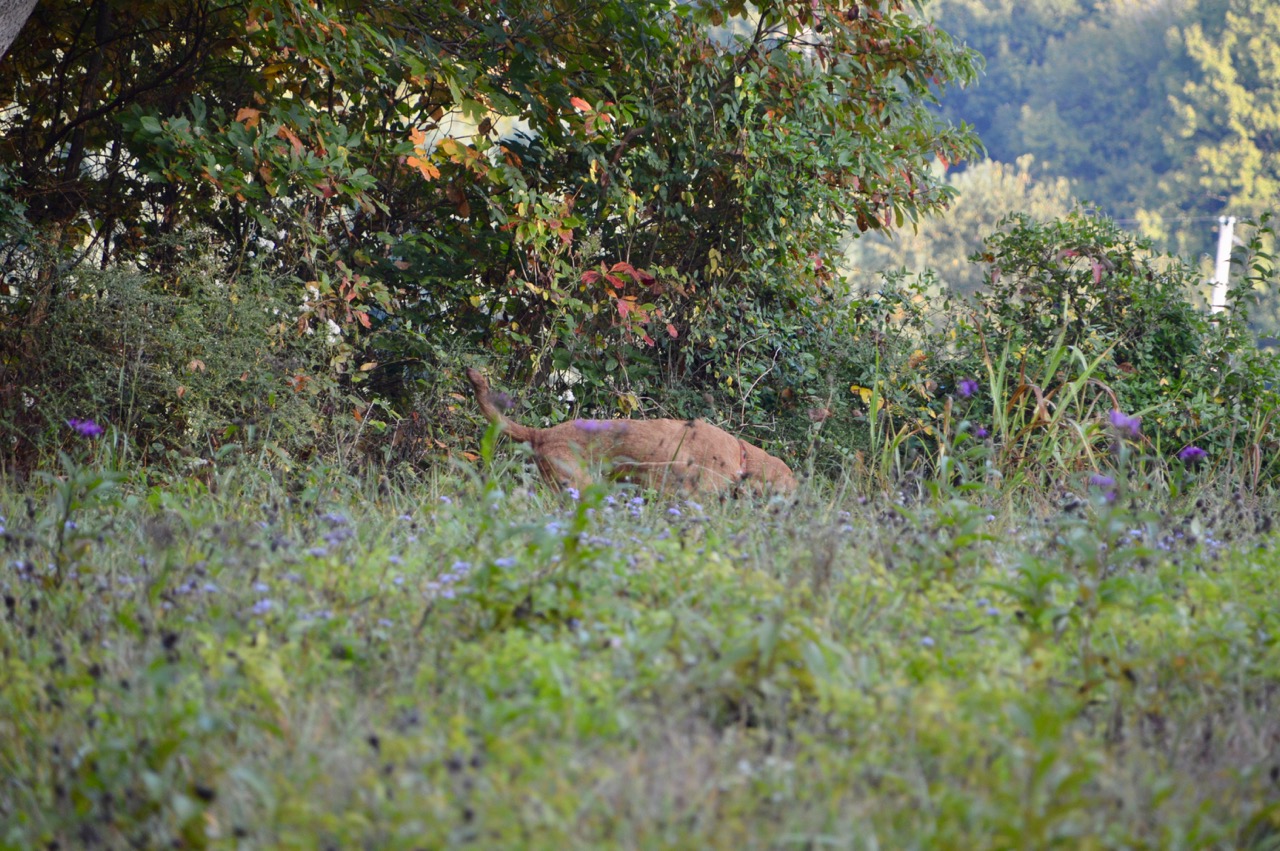 Stella tried to yesterday but succeeded today ... she headed out on the walk her way. Instead of walking straight out into the field with Sadie and I, she walks along the house north, up the slight hill and heads for the property line pole. She looked at me once when I yelled her name but continued on her way. I had a feeling she would curl toward us and join Sadie and I. She did.


I've noticed for some time that some of my pictures of the house and others that have poles, towers or trees lean to the right. I have to crop and adjust them to get the picture straight. Is that like me not feeling my ball cap is on my head crooked? 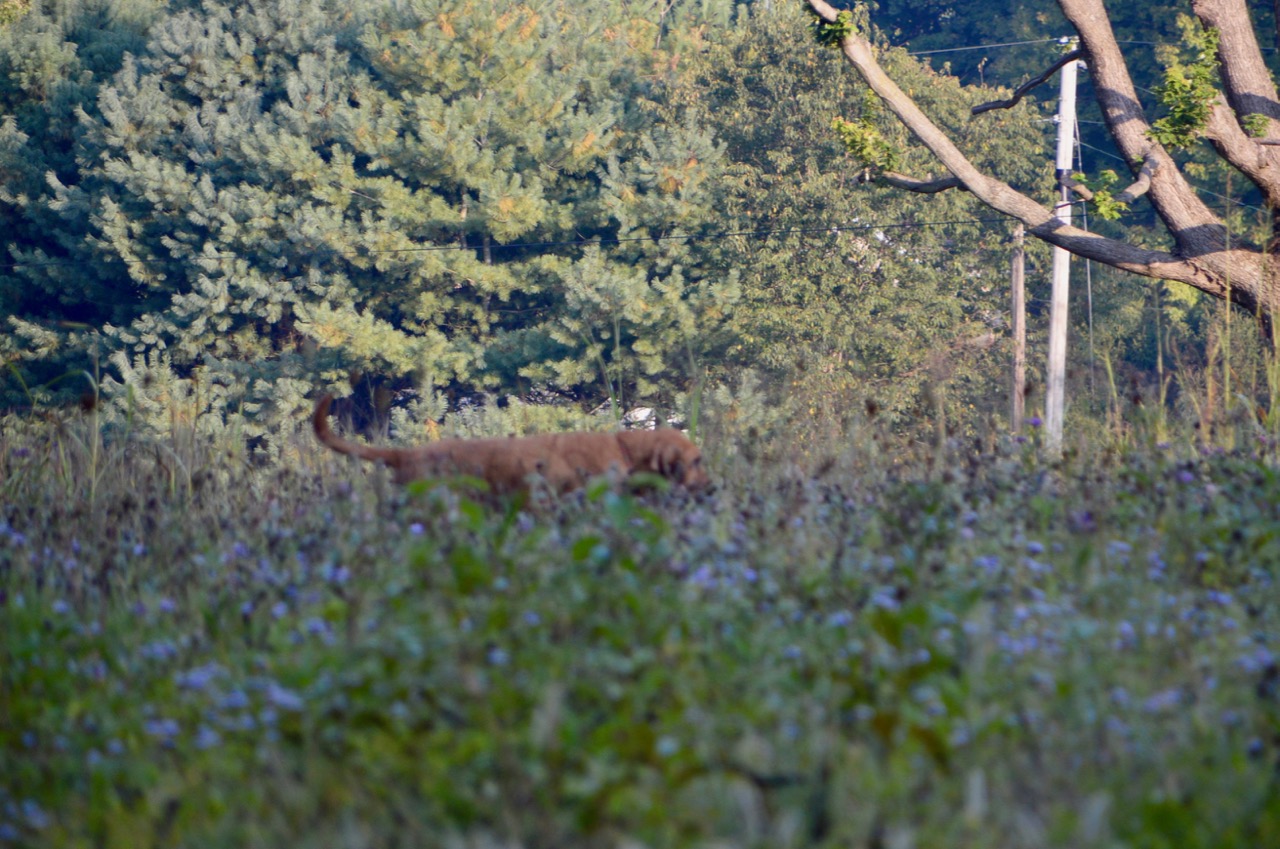 It's early as I write this, 9:36am. I'll post it later tonight with more afternoon photos and activity. I feel so much better today with a full 8 hours of sleep without numerous times of getting up in the night. My tooth is also not sore right now ... I see myself getting the dishes done, the yard mowed and the leaves in the driveway blown to the hill. 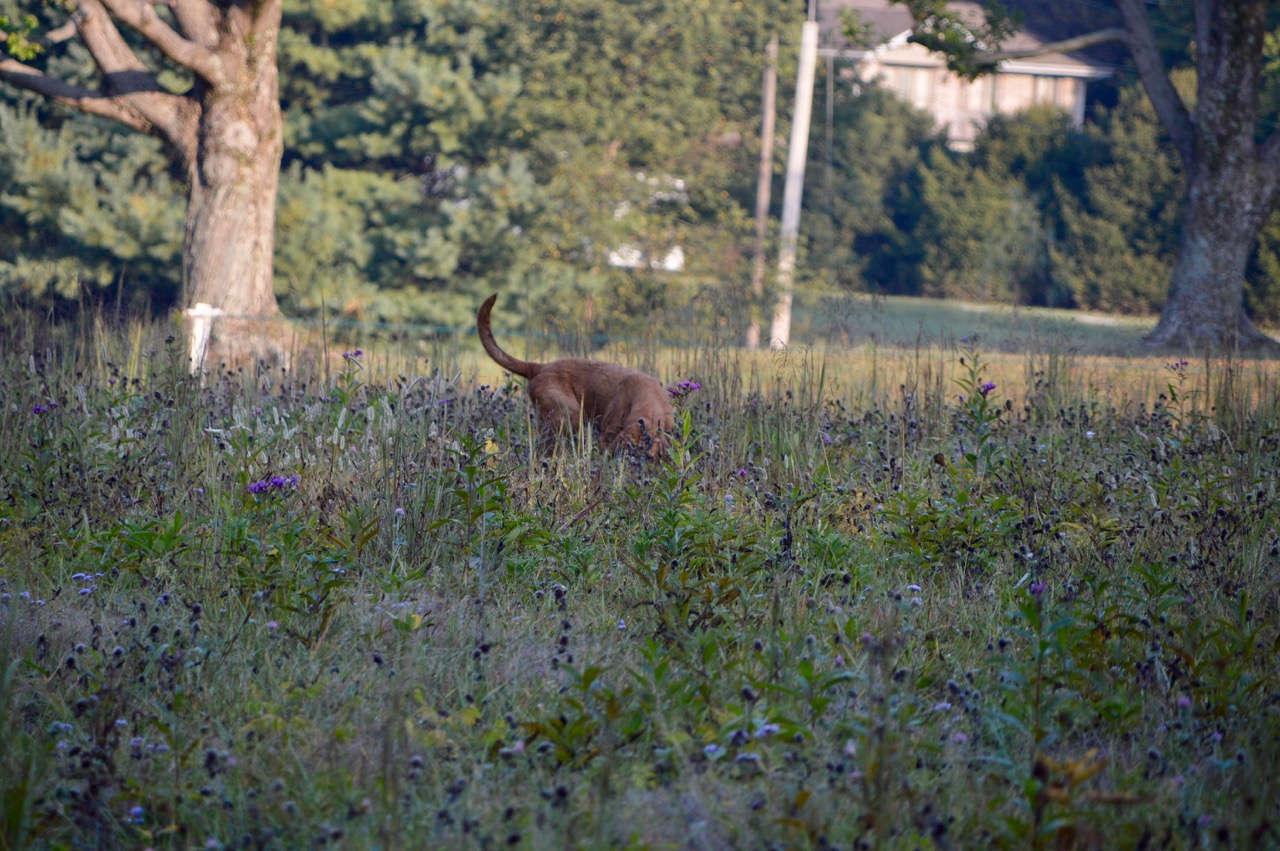 Sadie always follows the worn path of the deer on the first part of the walk. She will do that all the way to the first corner. 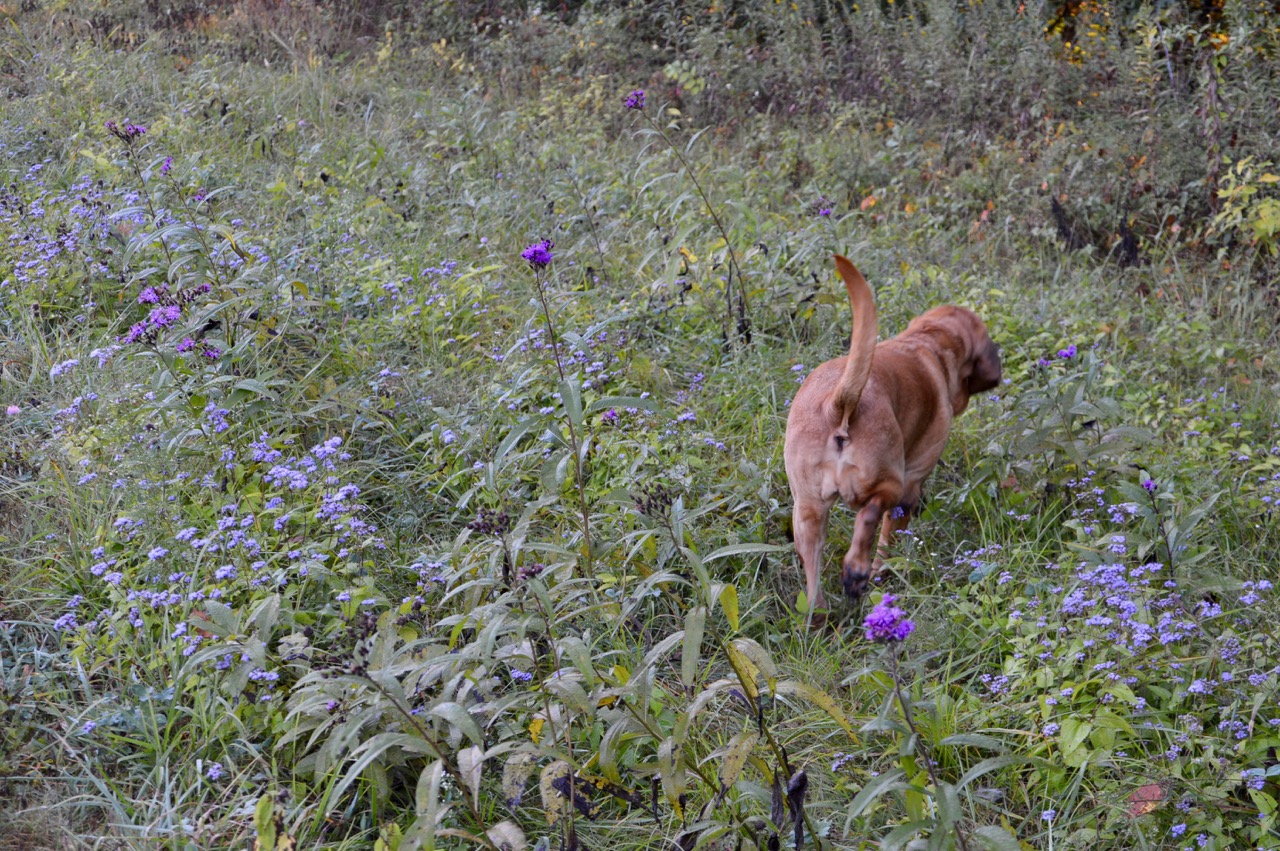 The rain on Tuesday morning (~5am) made not only the yard looking better but the field of weeds and wild flowers. It's greener, taller, softer ground yet not tall enough to really mow and bale. 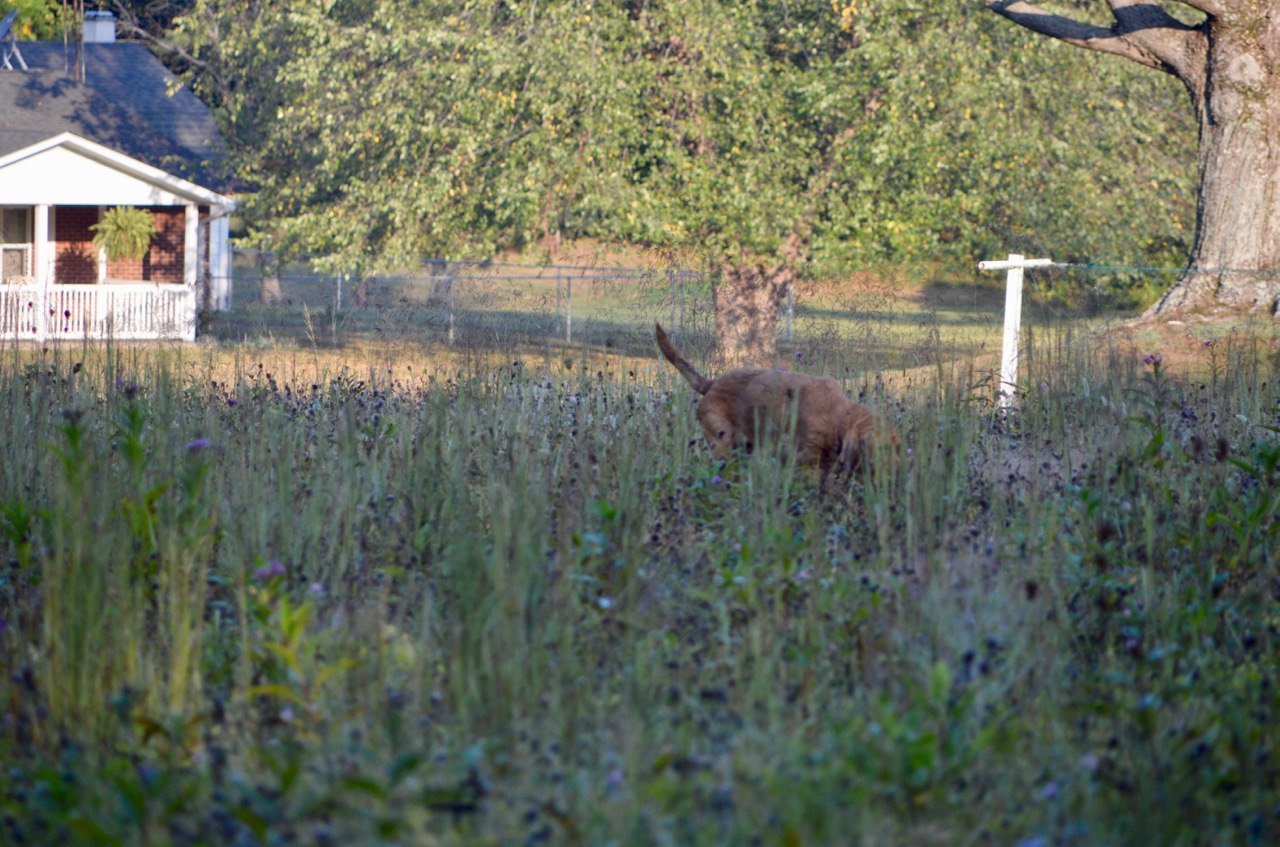 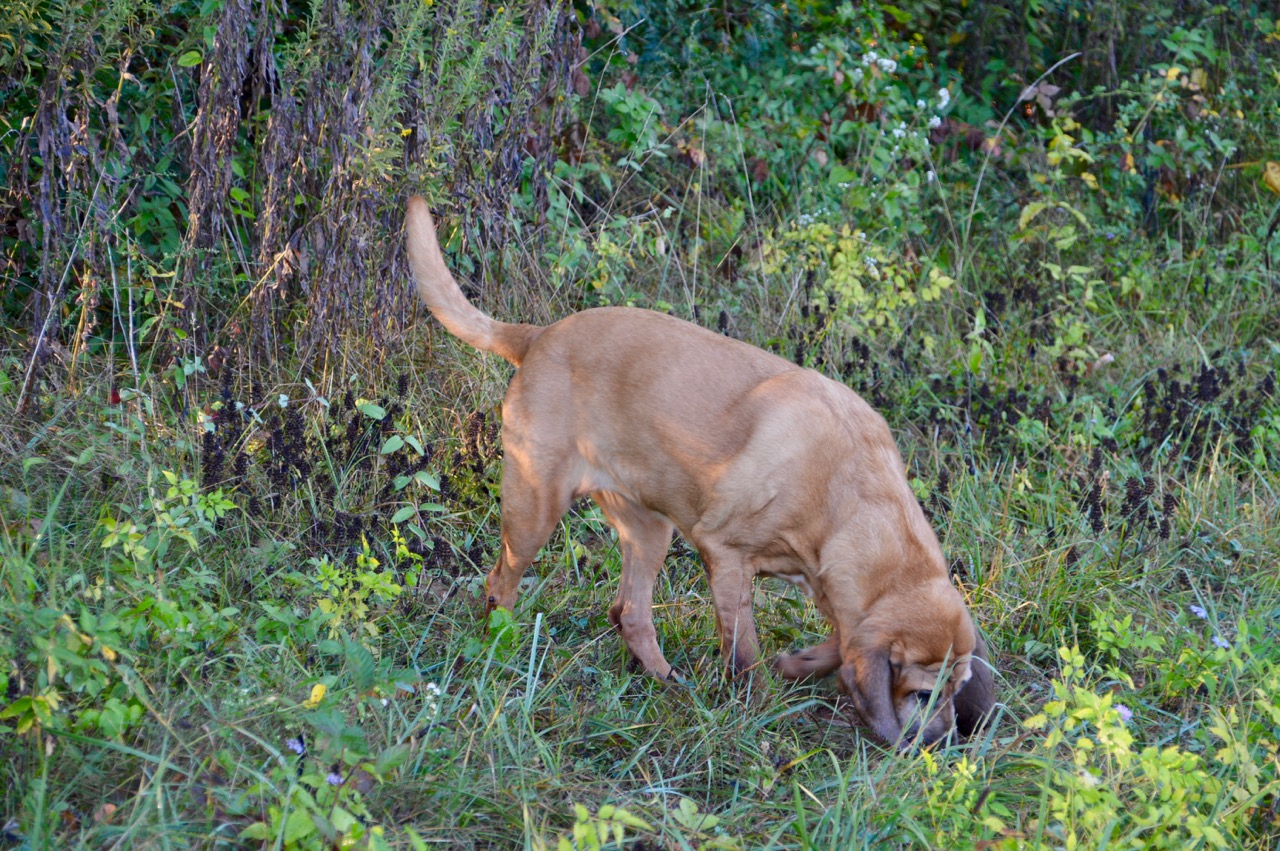 We are going to have 4 straight days with highs of 90° and by next Thursday those cool temps of 76° will return. I look forward to them and hope they stay the couple of months. I don't like winter but I'm tired of running the AC all the time.

For the 2nd day in a row I am giving myself a mental note ... fix only one cup of coffee because I seem to be drinking only a cup and a half lately. 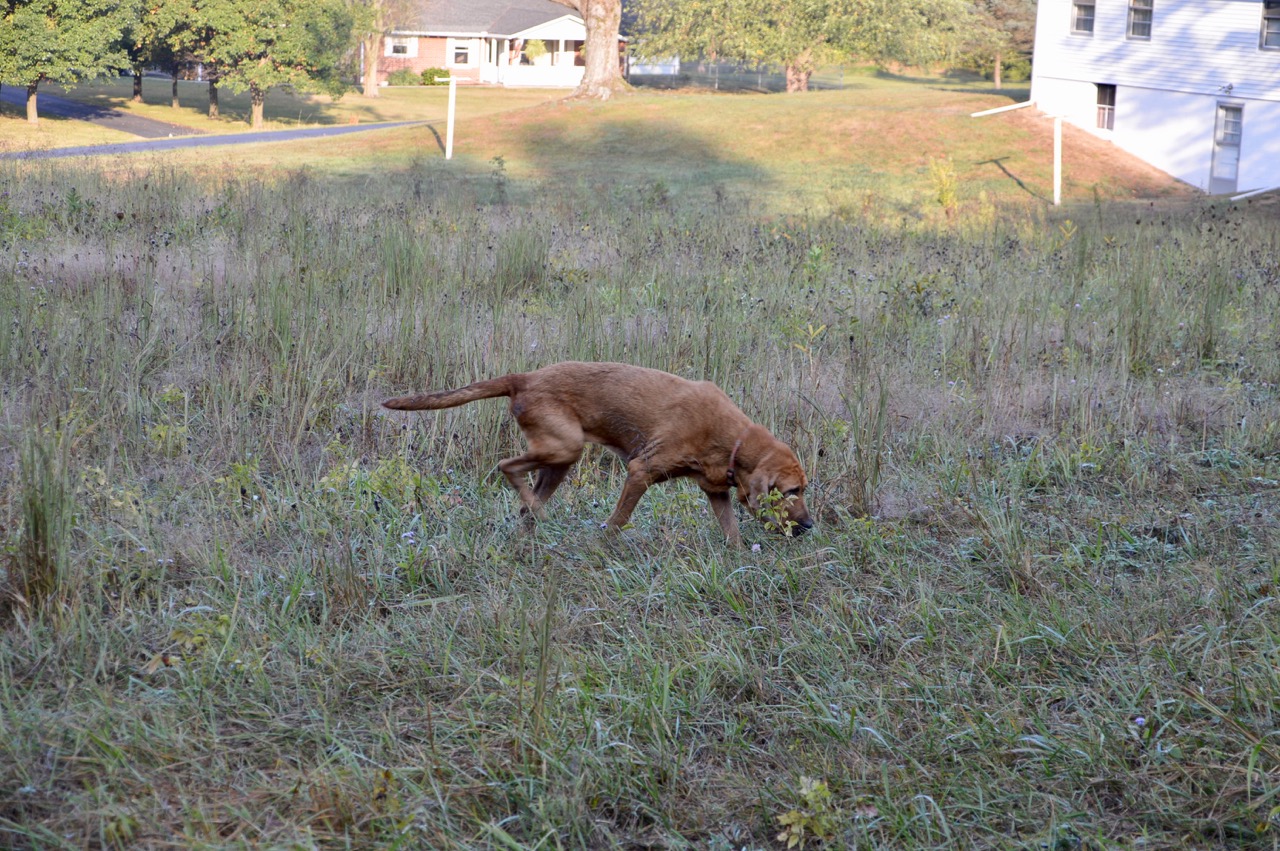 She decided to walk on the large path made by the ATV and with some voice commands she joined Sadie and I on the walk. 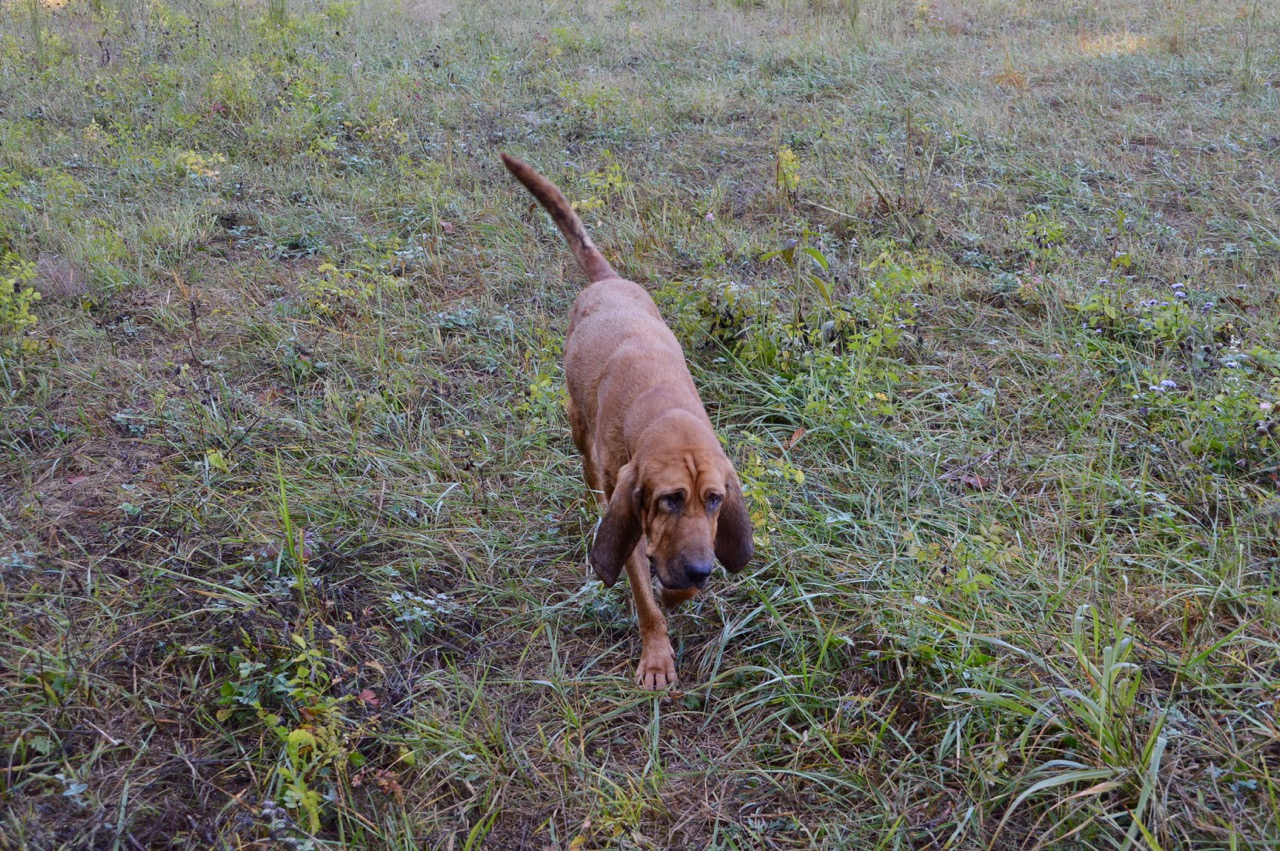 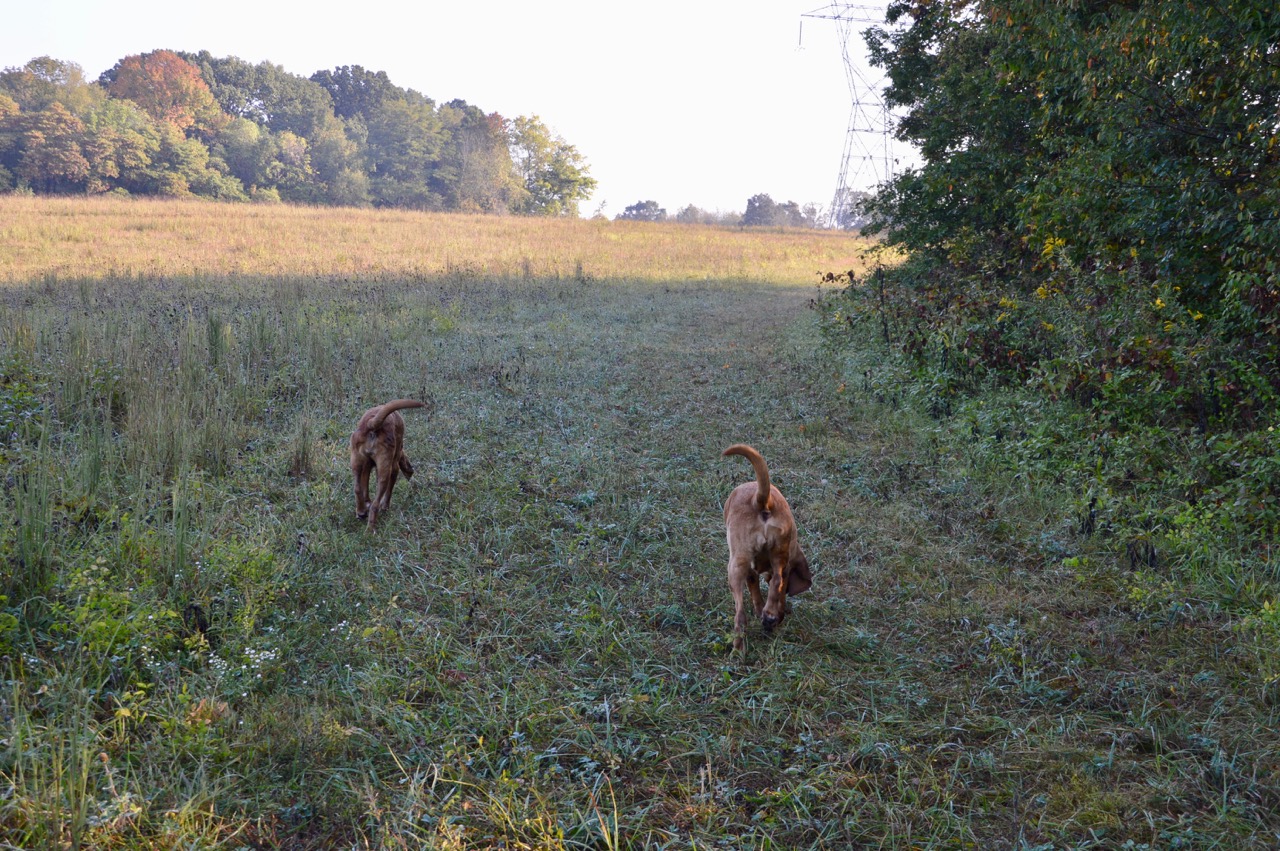 While I was trying to get this flower into focus I didn't see Stella taking off, again in her own direction. 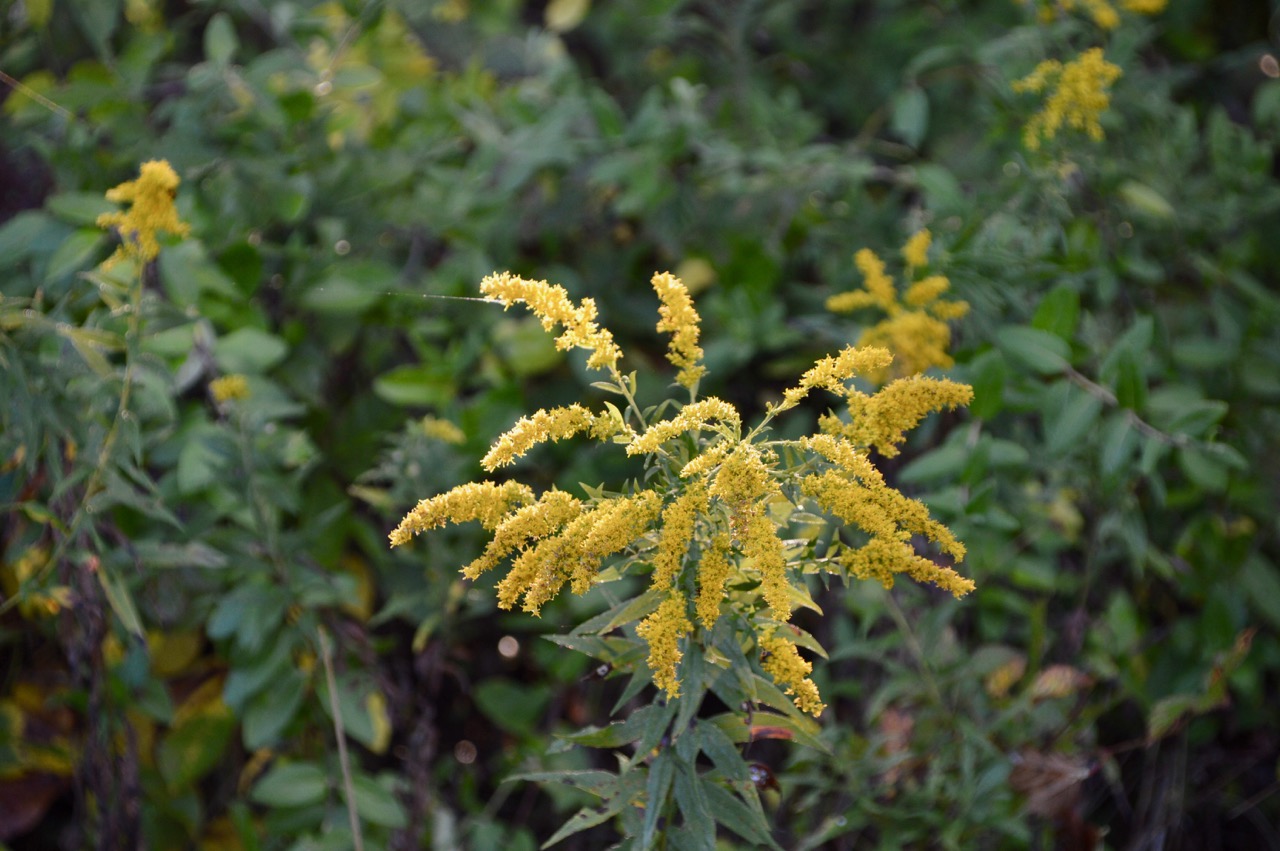 As I turned the corner I saw only Sadie ... where had Stella gone? 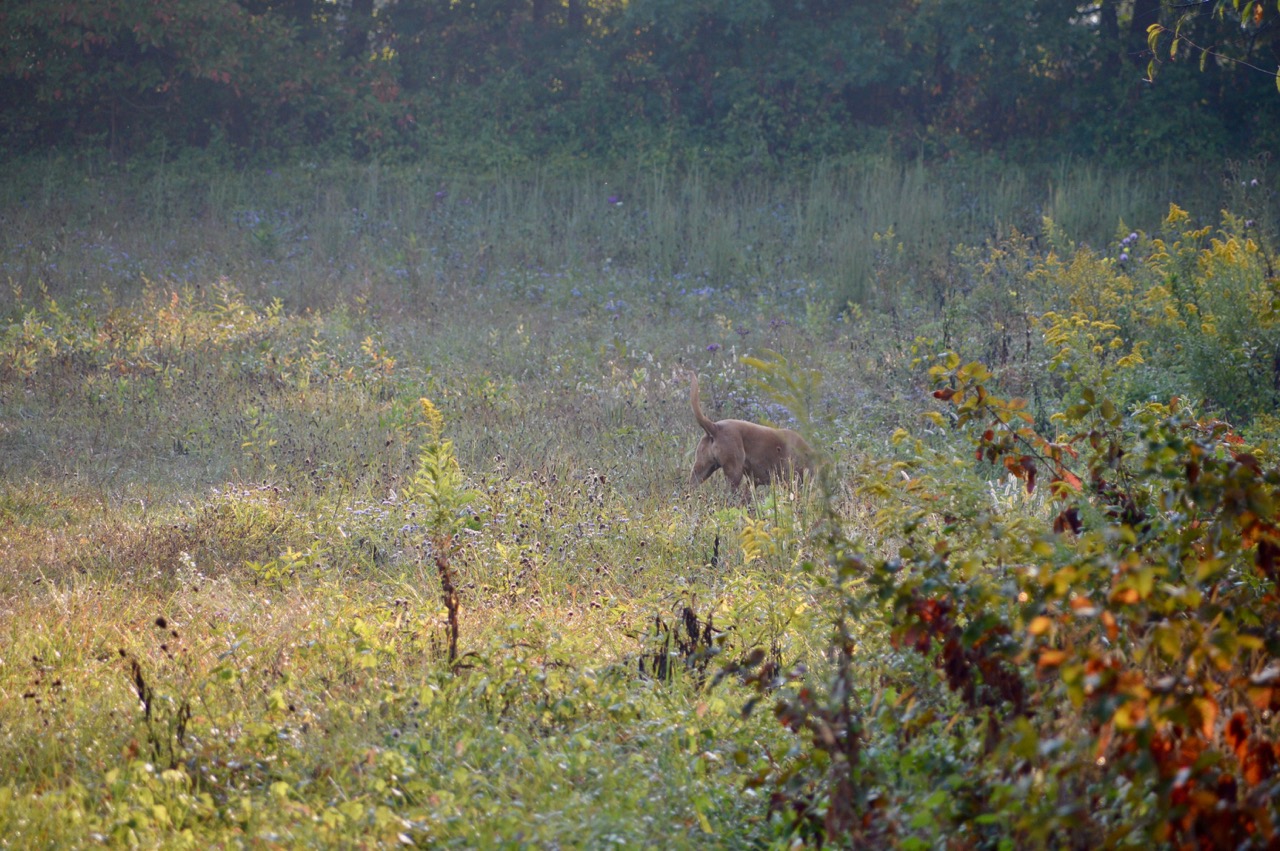 I barely notice her out in the middle of the field ... that's fine, a good spot for her because I have to walk less of a distance on the way back to pick her up. 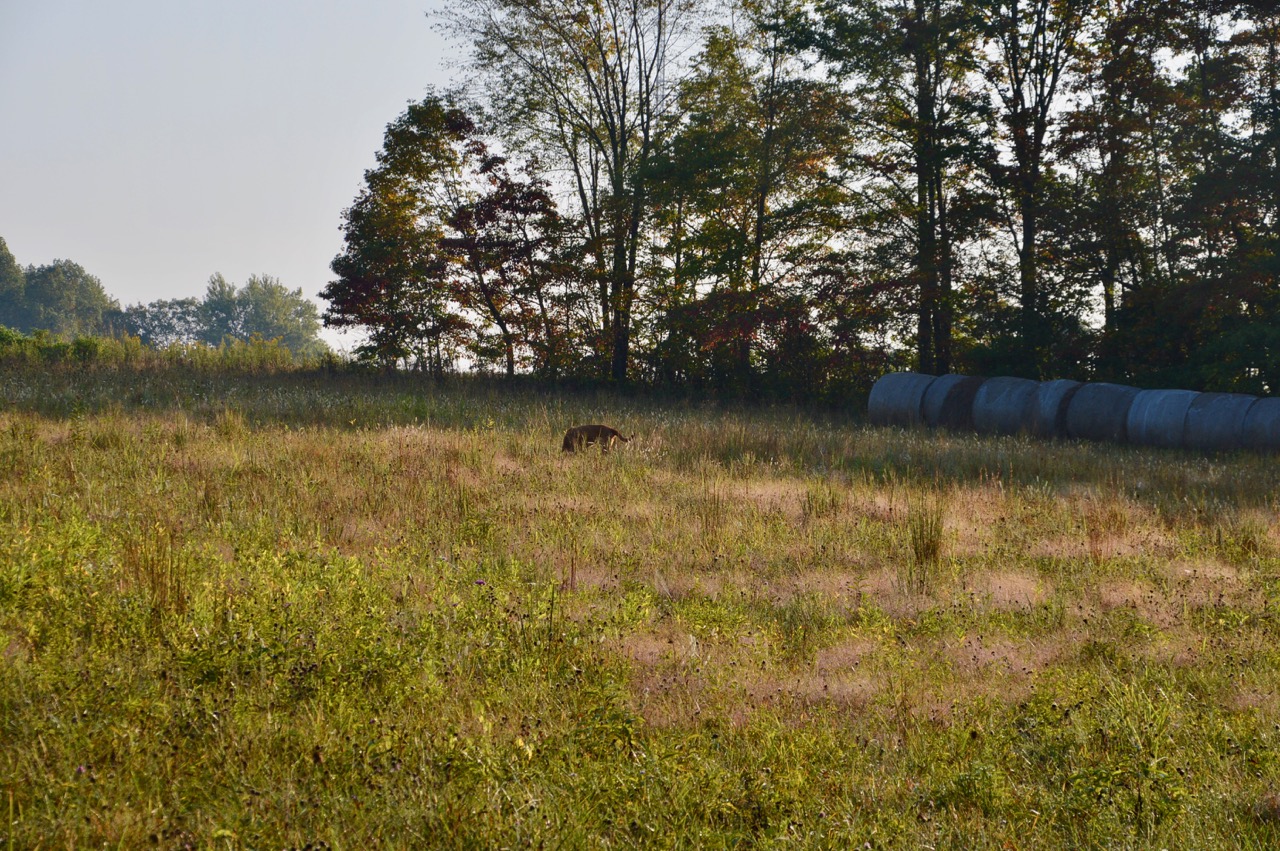 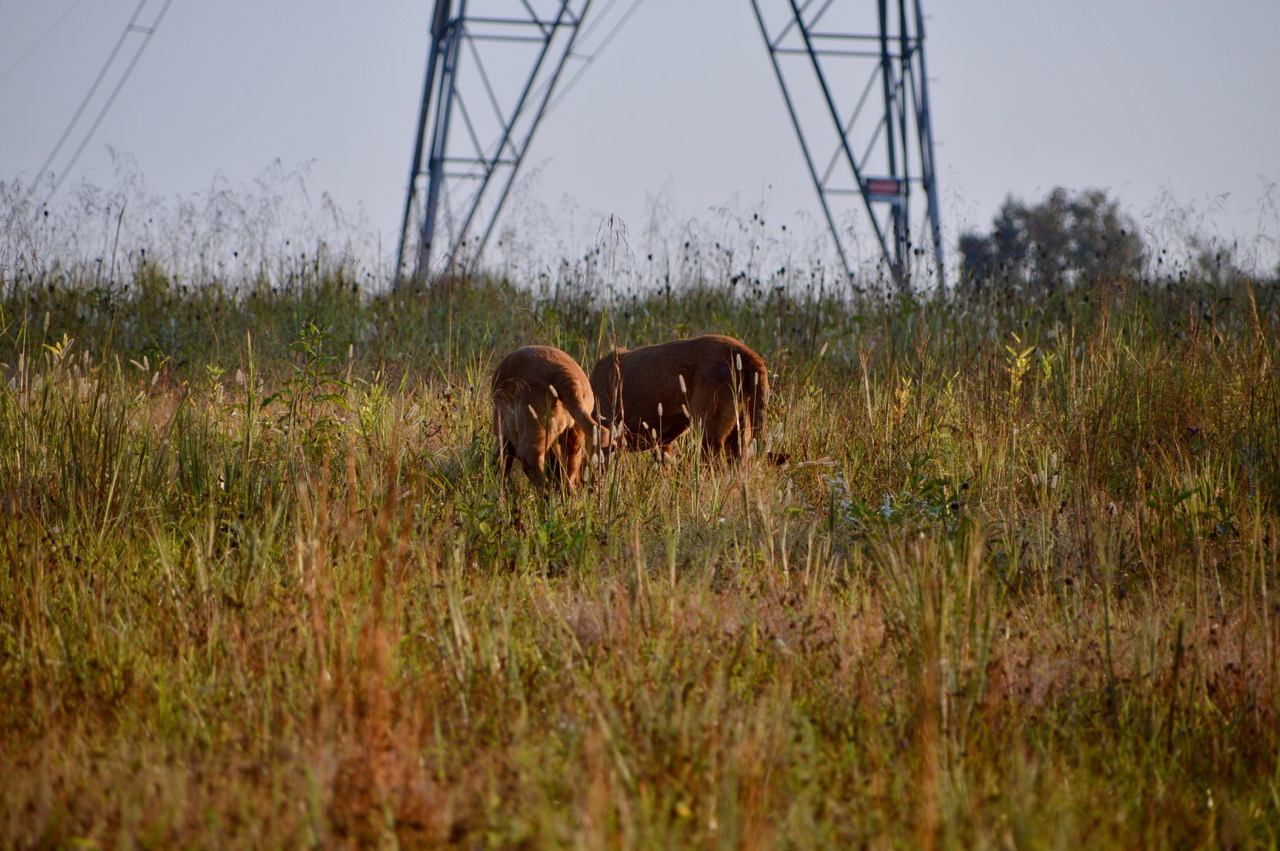 As I turn to walk in front of the hay bales, neither hound moves ... 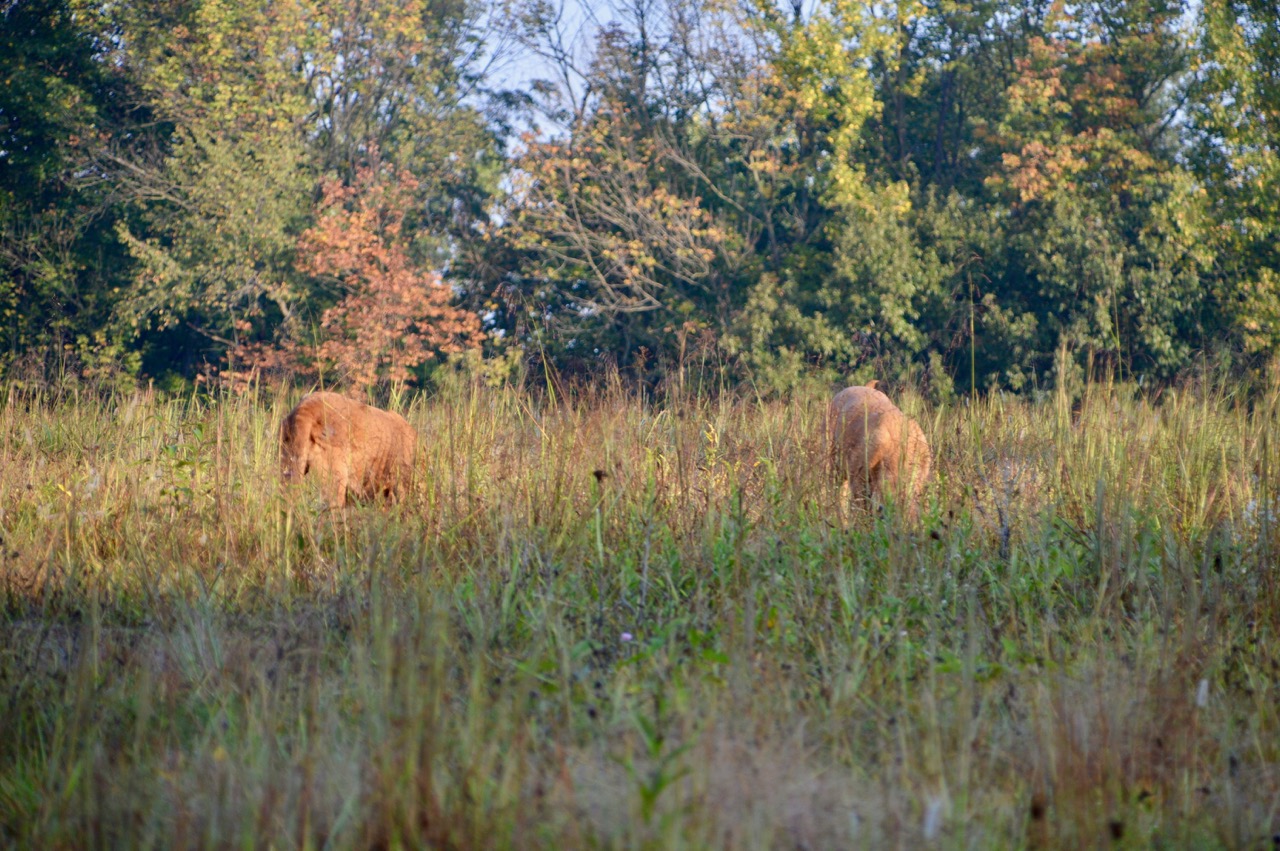 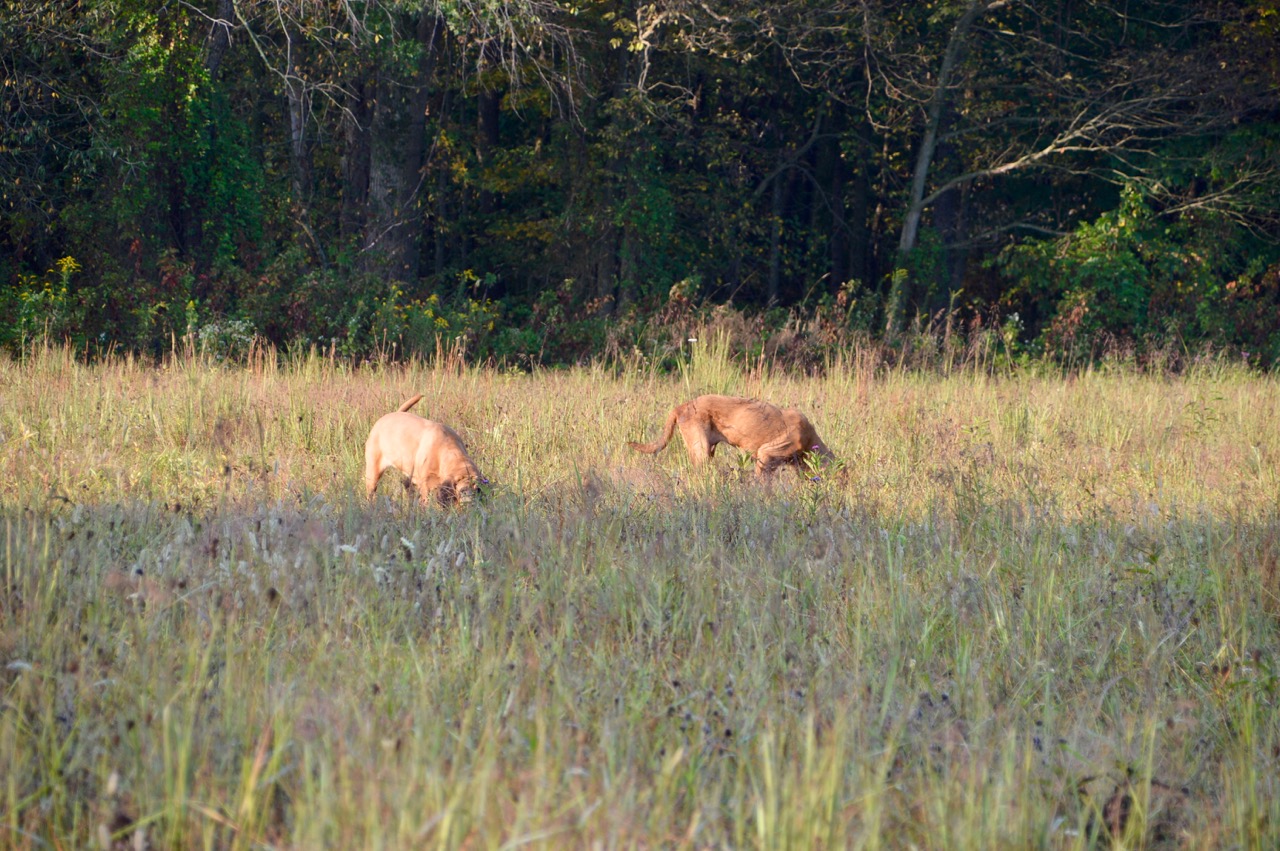 As I walked I felt so much better than I have in recent days. So it's been those sleepless nights that have made me feel non motivated during the days. 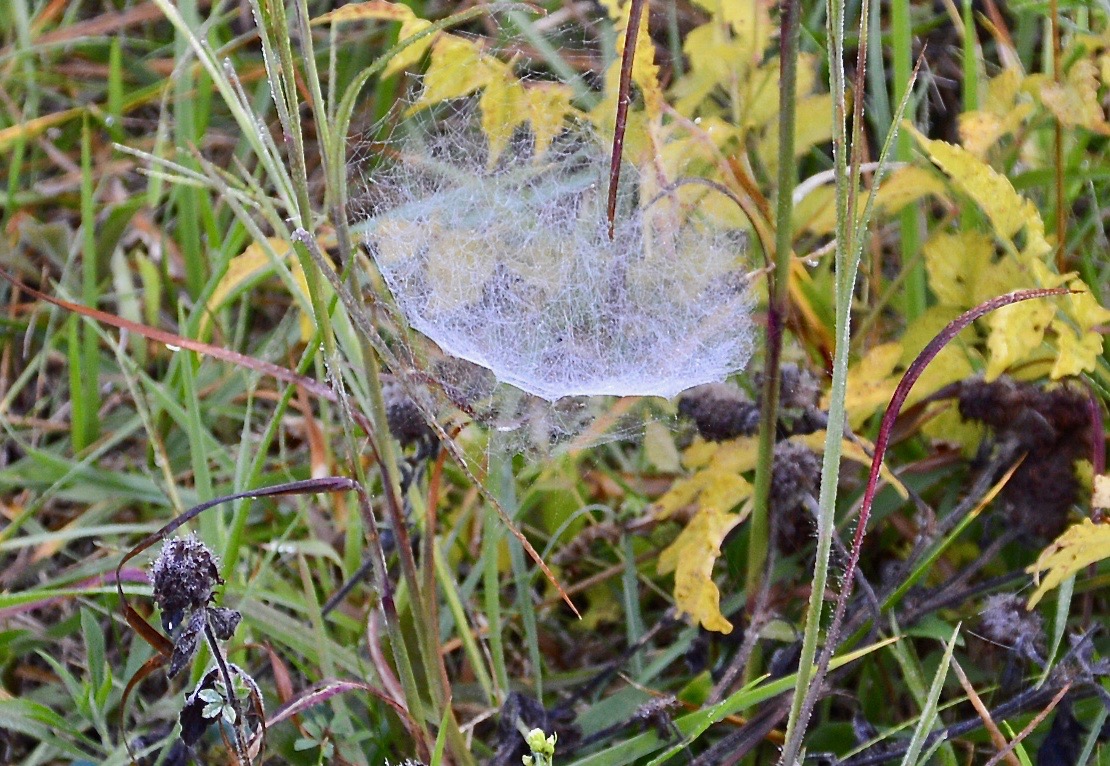 By 11:15am I had washed the dishes and mowed every inch of the yard and culvert. I decided wet grass and cooler temps was better than dry grass and 90°. The dish washing went smooth, and was fairly fast. I didn't really have that much, it looked worse. As far as the grass, it was still hot, major sweat but no periods of feeling light headed. My Garmin told me I spent 50 minutes, it was a good workout. 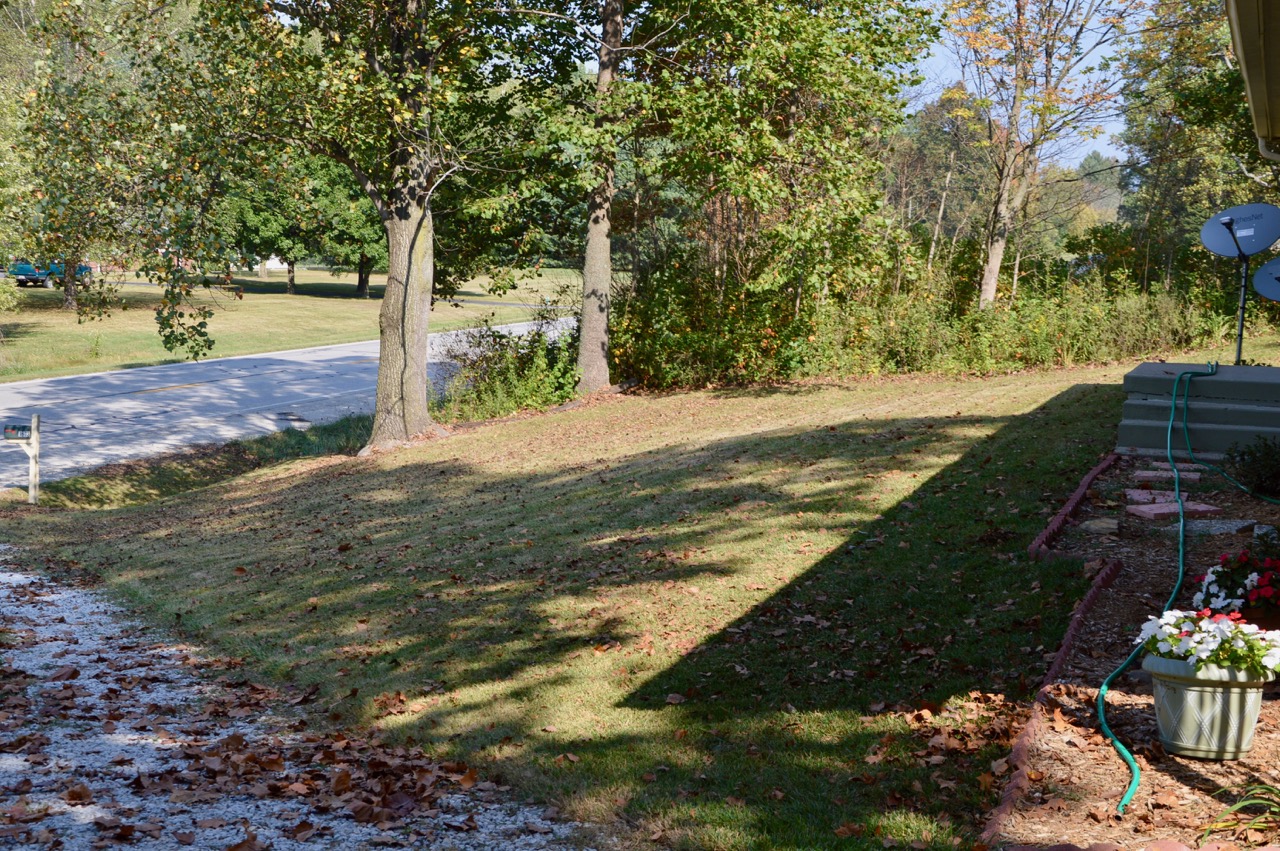 I lowered the mower a notch. I like to cut it lower in the fall so it gets more sun during the fall growing season and winters. I think it had been 2-3 weeks since I mowed it last so it was just right as far as length goes. A lot of leaves got semi-mulched. I'll not start raking them until they get overbearing in the yard. 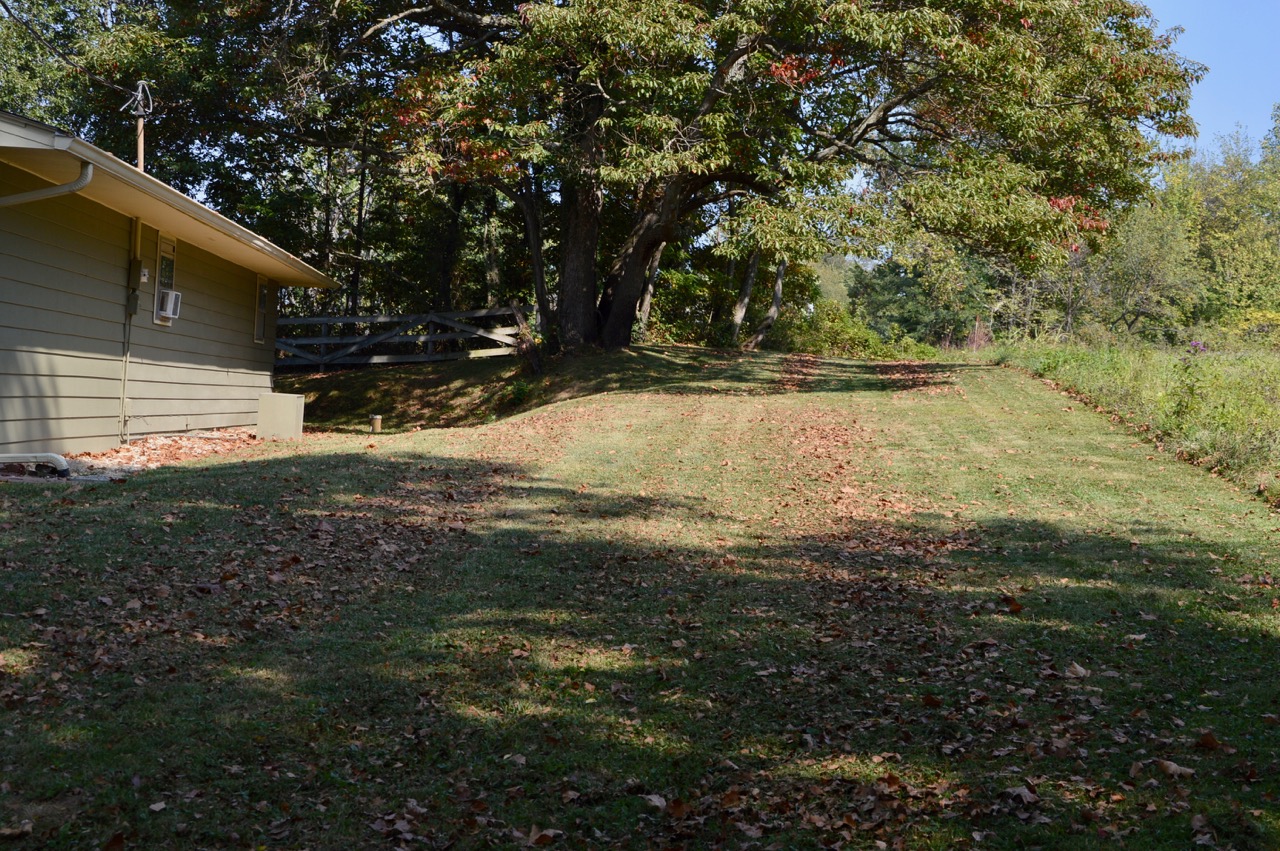 By 11:30am, the temps were 84° but "feels like" 92. The hounds took their short lunch break and I put the mower back in the shed. I saw the neighbor sitting on his porch so I yelled "What happen to those LSU Tigers" since he is from Louisiana and Ole' Miss kicked their ass last Saturday in college football.

With it being so hot I don't think the hounds and I will take a walk until after 7pm tonight. I am writing this as I am sitting here trying to cool off inside, the hounds are asleep. Dishes are put up, nothing else going on.

At 4pm it was 90° and 'feels like' 95° but in the past those high temps haven't felt that hot on a hound walk. With my last load of laundry in the dryer I decided to head out, take some photos and finished a day that turned out to be greater than I thought it would .... GOT A LOT DONE TODAY !!! 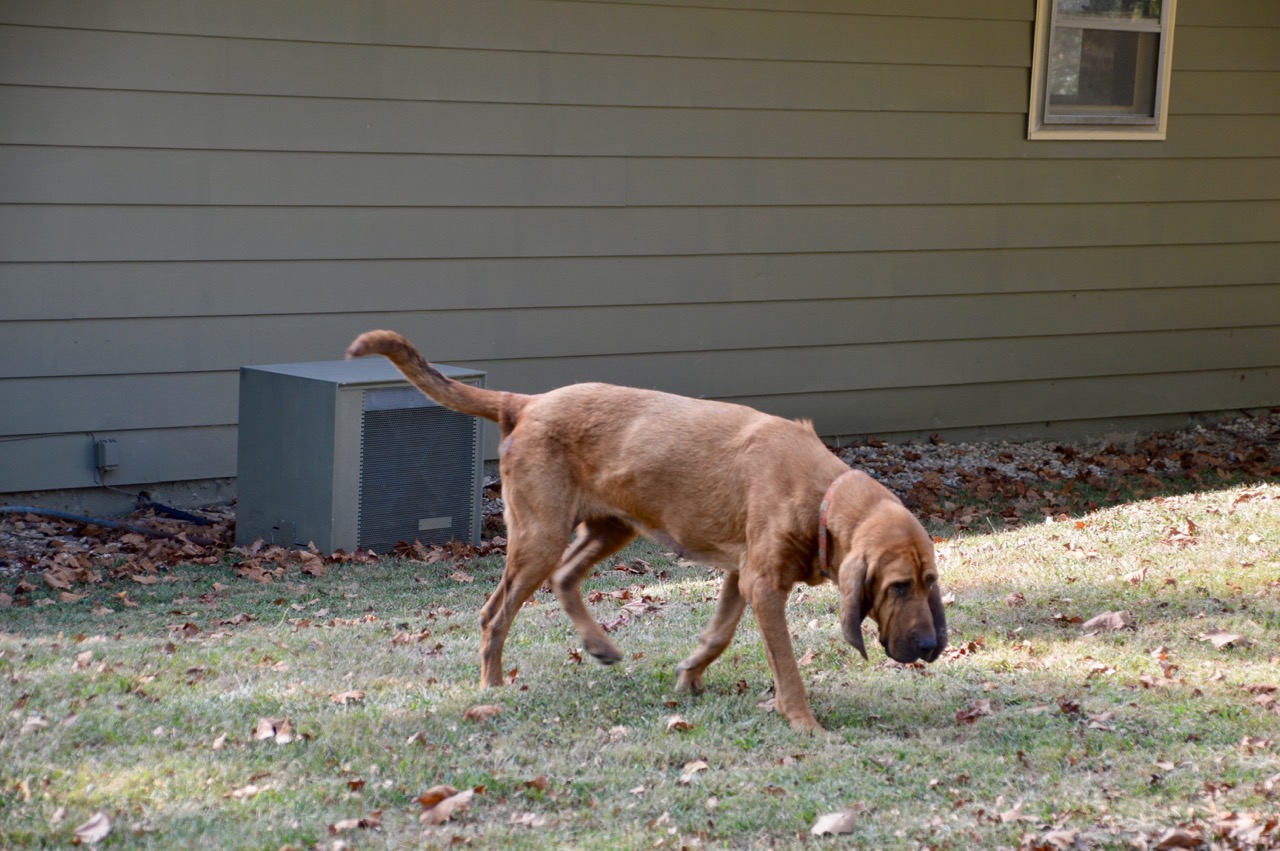 Stella started to repeat her path from this morning but turned and came when I called her name. It was so hot I didn't want to leave the hounds outside any longer than our normal 12-13 minute walk. 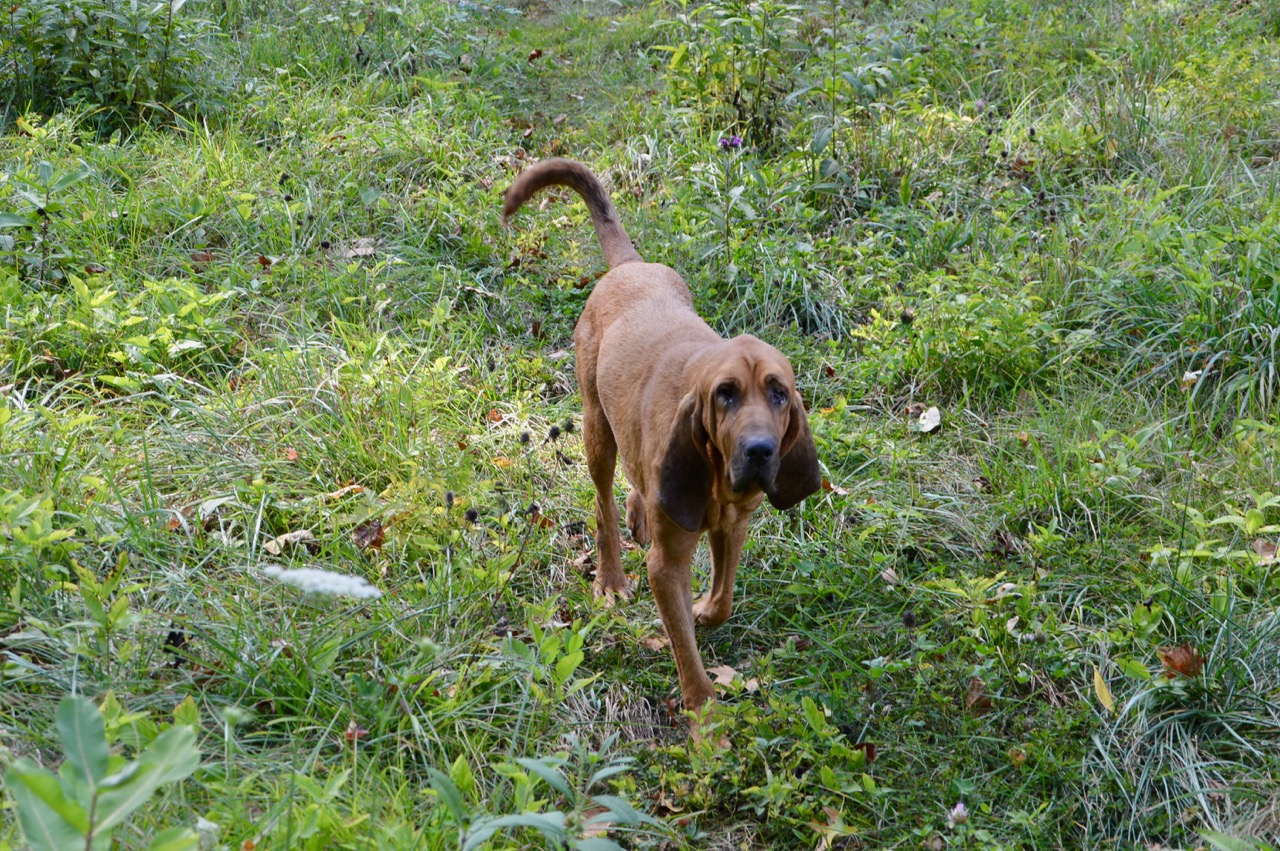 I guess after 7 months, this is her new normal. She is still thin but shows no signs of being sick, tired or in pain. I have increased the amount of kibble I feed her. Maybe I need to even increase it again. 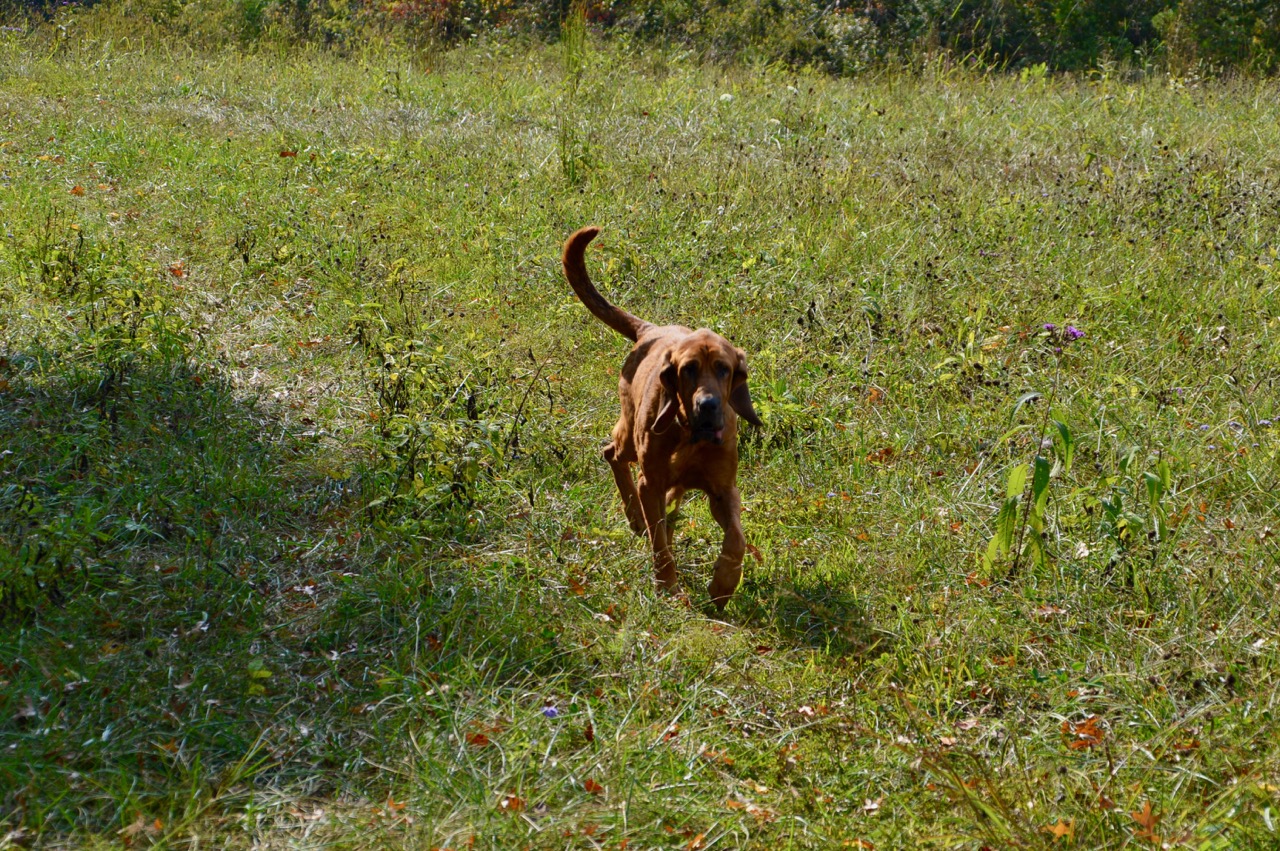 By the time we got to the first turn ... it was HOT !!!! But we continued on. I kept thinking about all the stuff I got done today just because I felt better with my tooth (slight pain) and 8 hours of solid sleep. I guess I need to keep going to bed during the week before midnight. 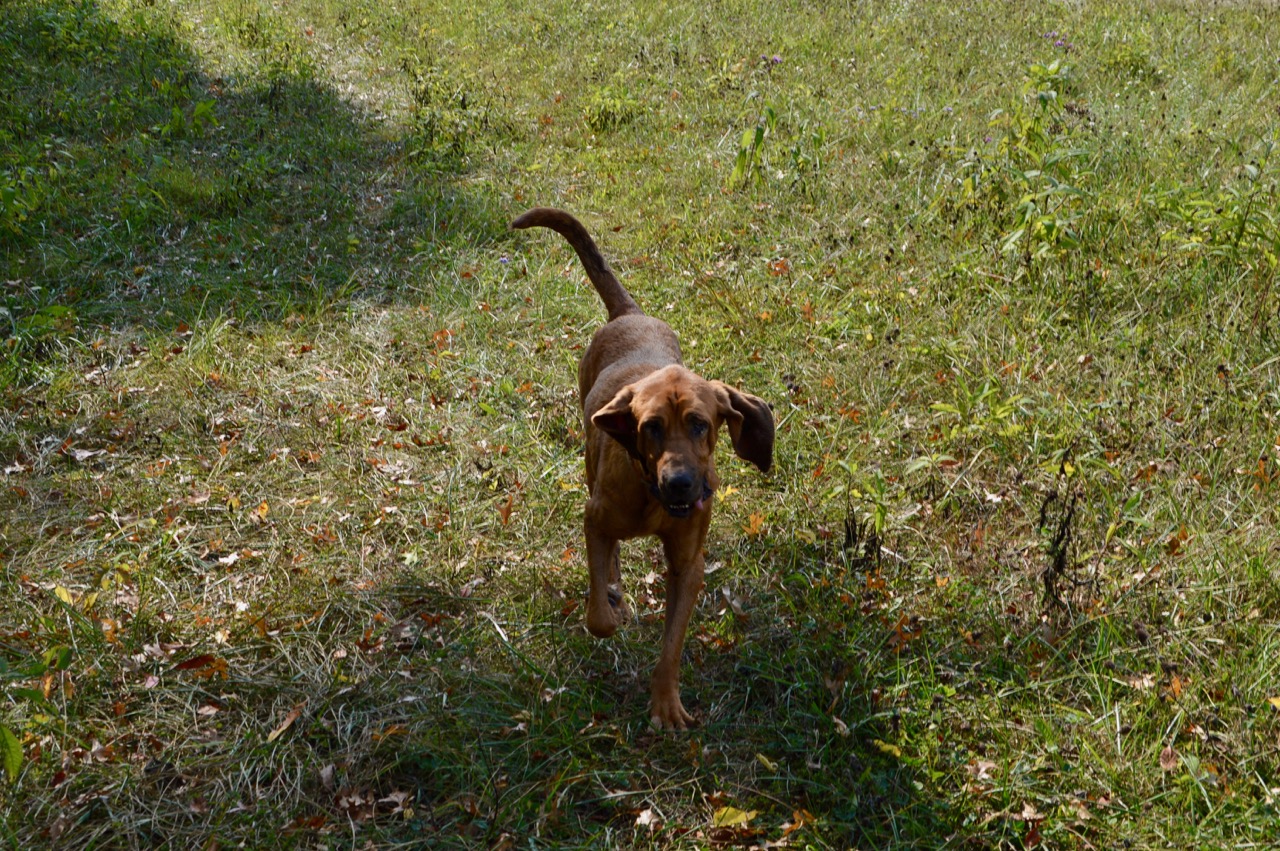 Another picture I would have put on Facebook with Sadie sprinting by Sadie with her ears upright. 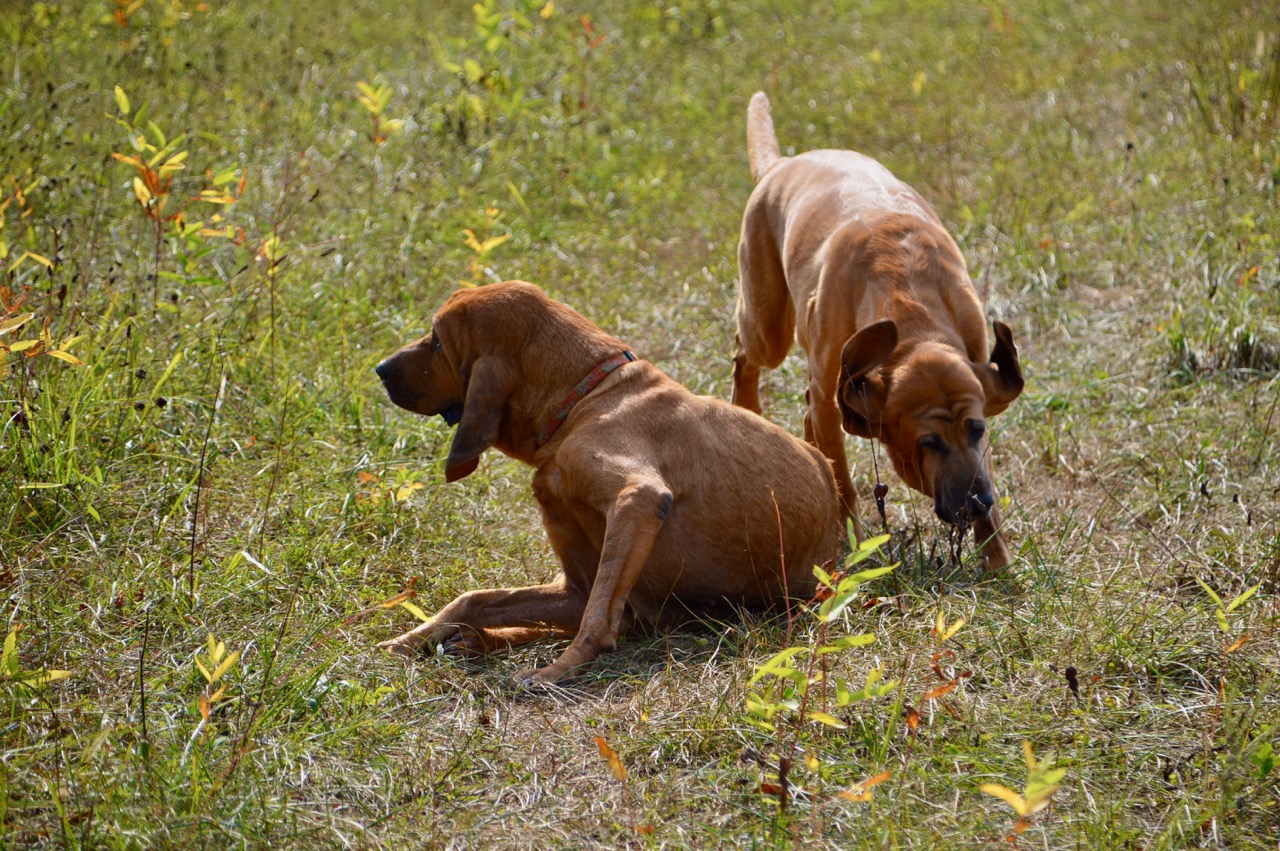 So today, did the dishes and cleaned the kitchen. Had the yard mowed before 11:15am. I gave myself a hair cut with the #4 blade, took a shower and shaved ... then did two small loads of laundry.

It's been one of the best days I've had in a while. 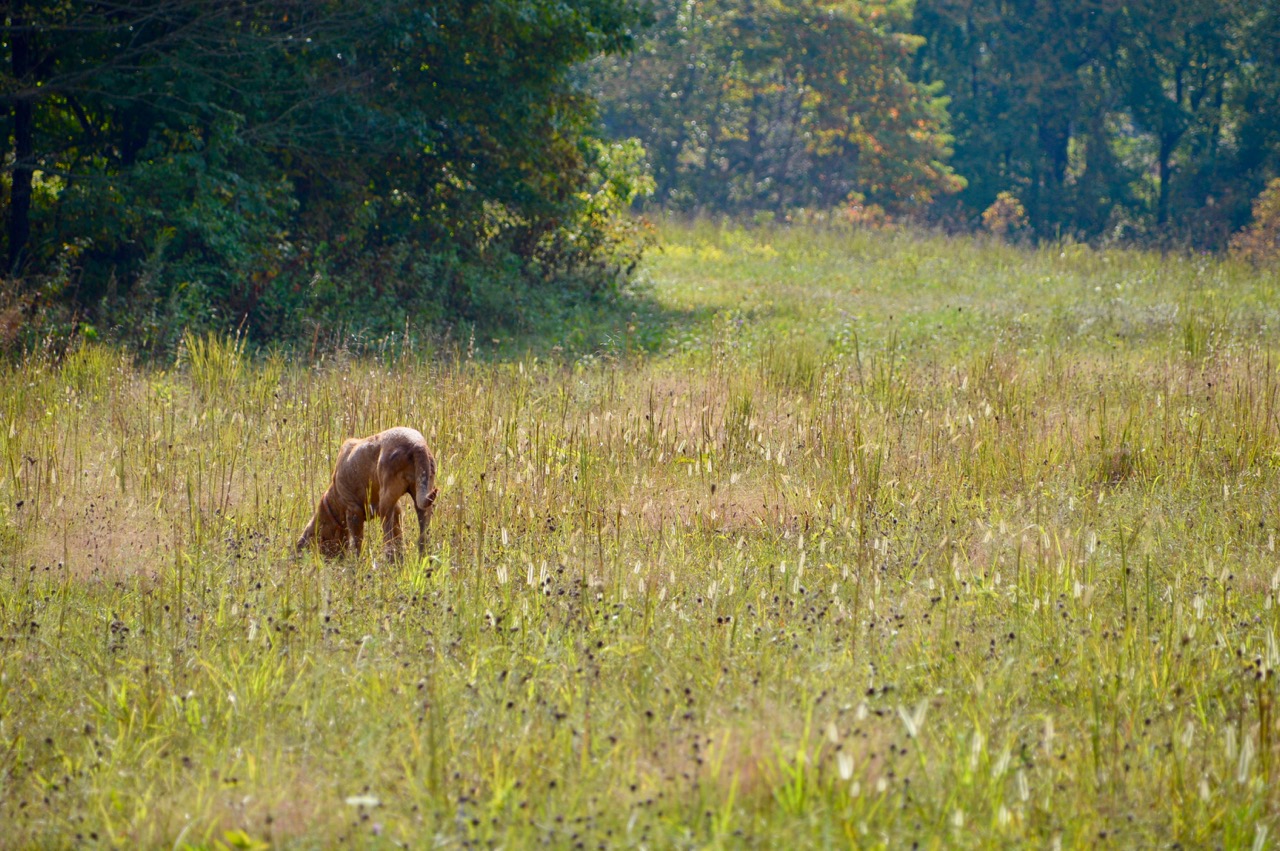 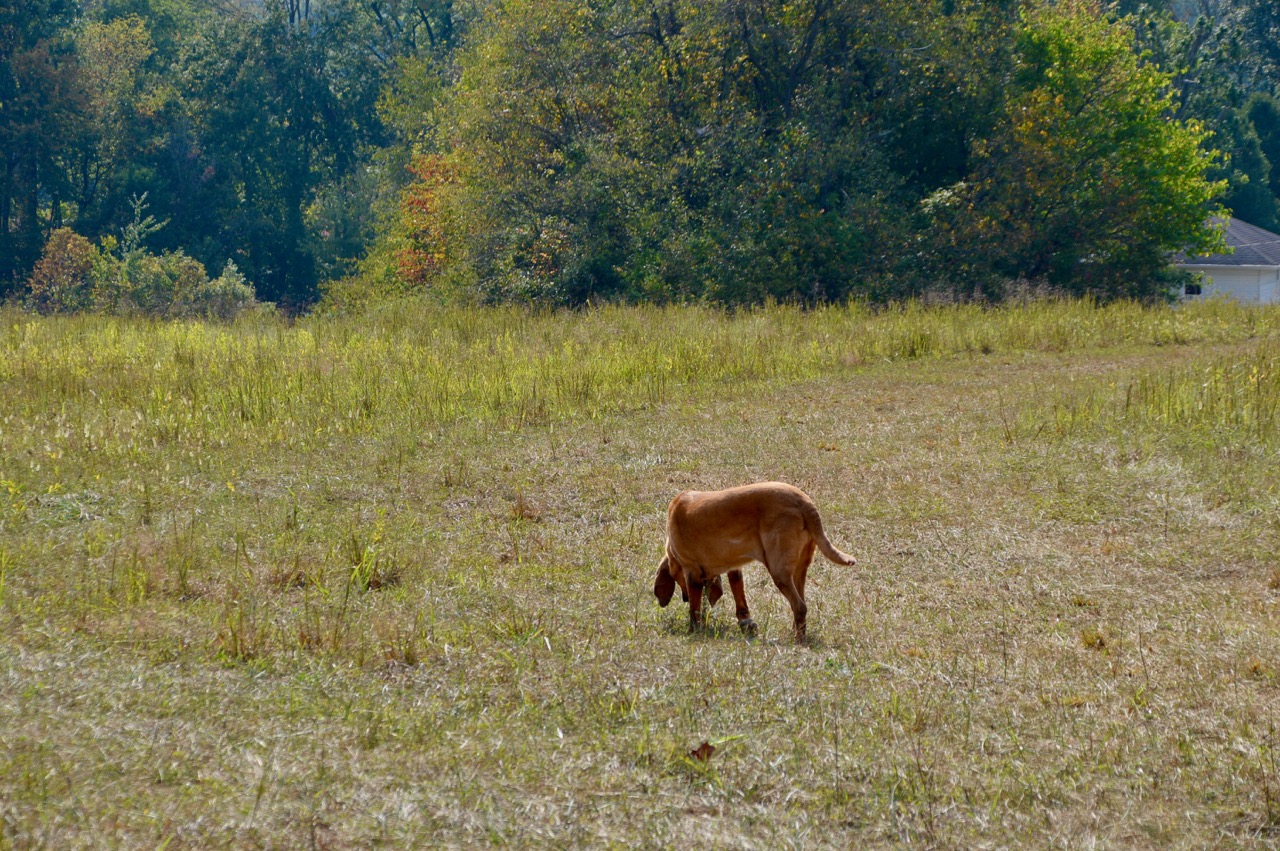 As I walked past Stella I yelled "over here" and it was so hot I think that she paid attention to me. She slowly started walking to meet Sadie and I on the path home. 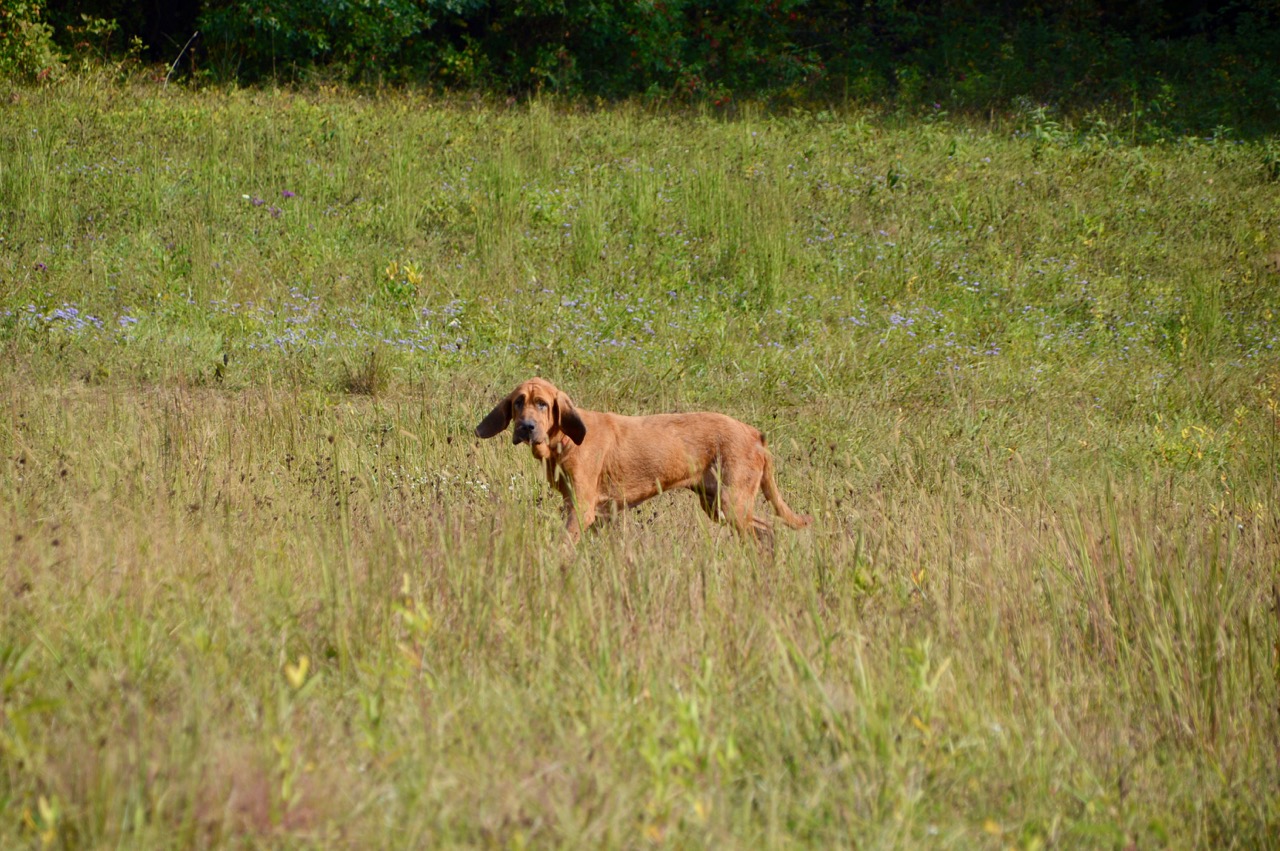 You can tell when it's really hot by Stella's tongue hanging outside of her mouth. 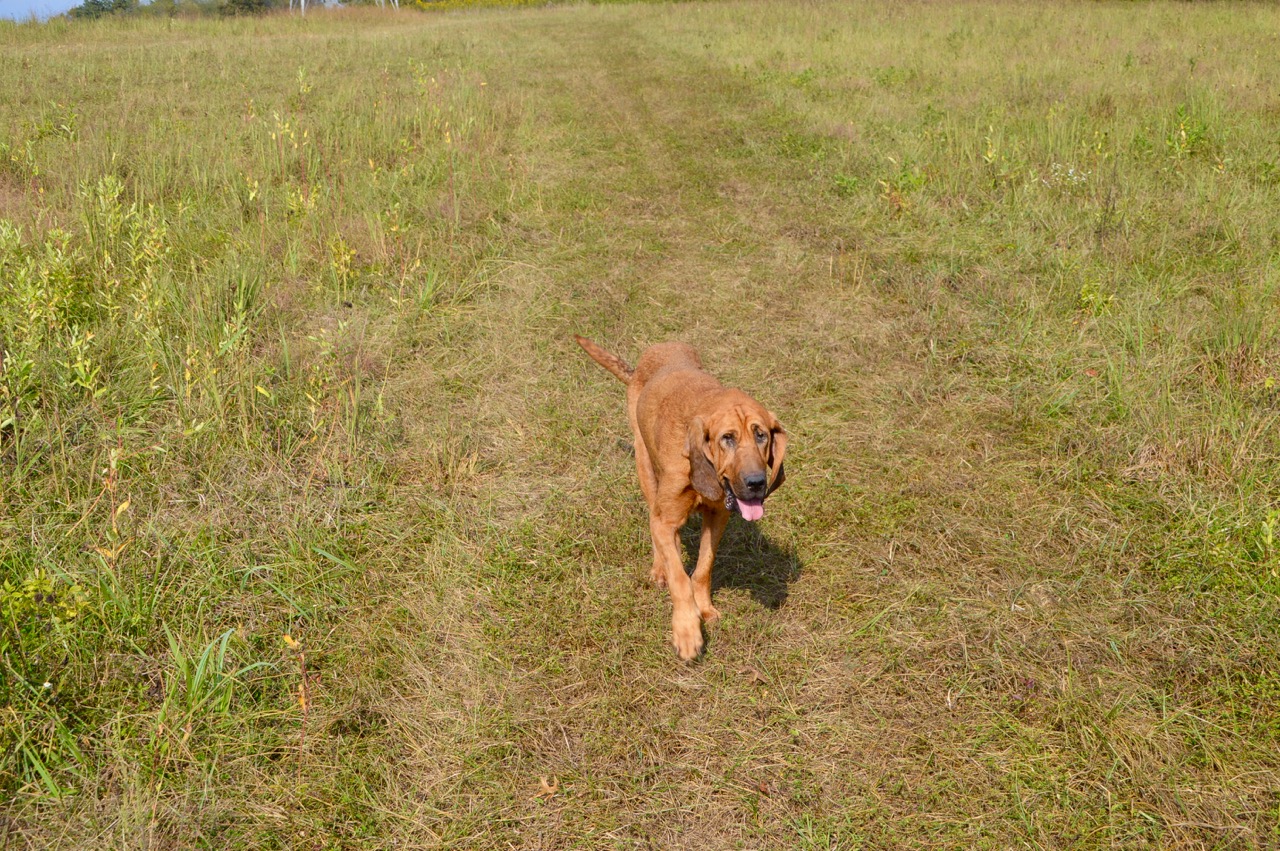 The 10-day forecast shows only 6 more days of extreme heat and then a sudden 15° drop into the 70's as our highs, a week from tomorrow. 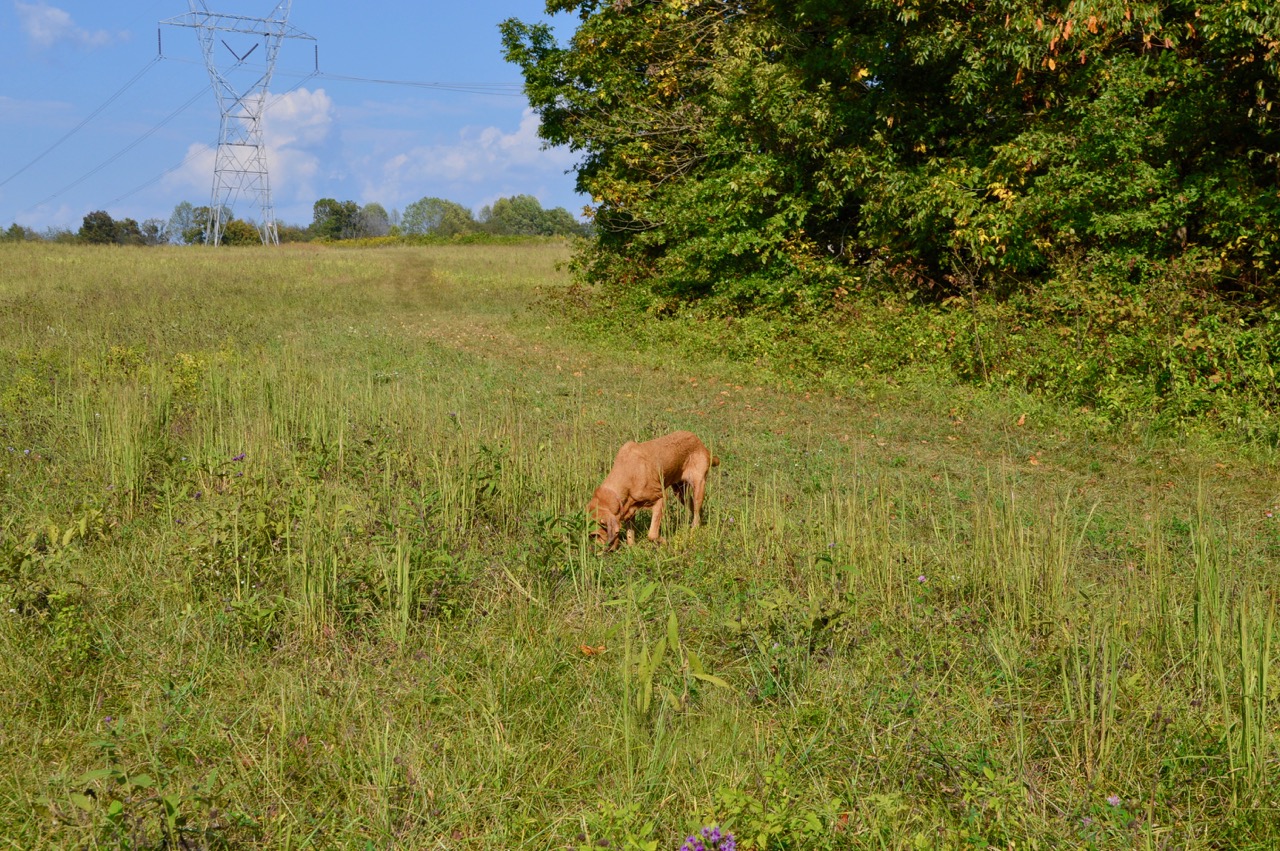 These last 3 photos I changed the setting to "Dynamic AF". I can't remember what that means or what kind of pictures it is for. 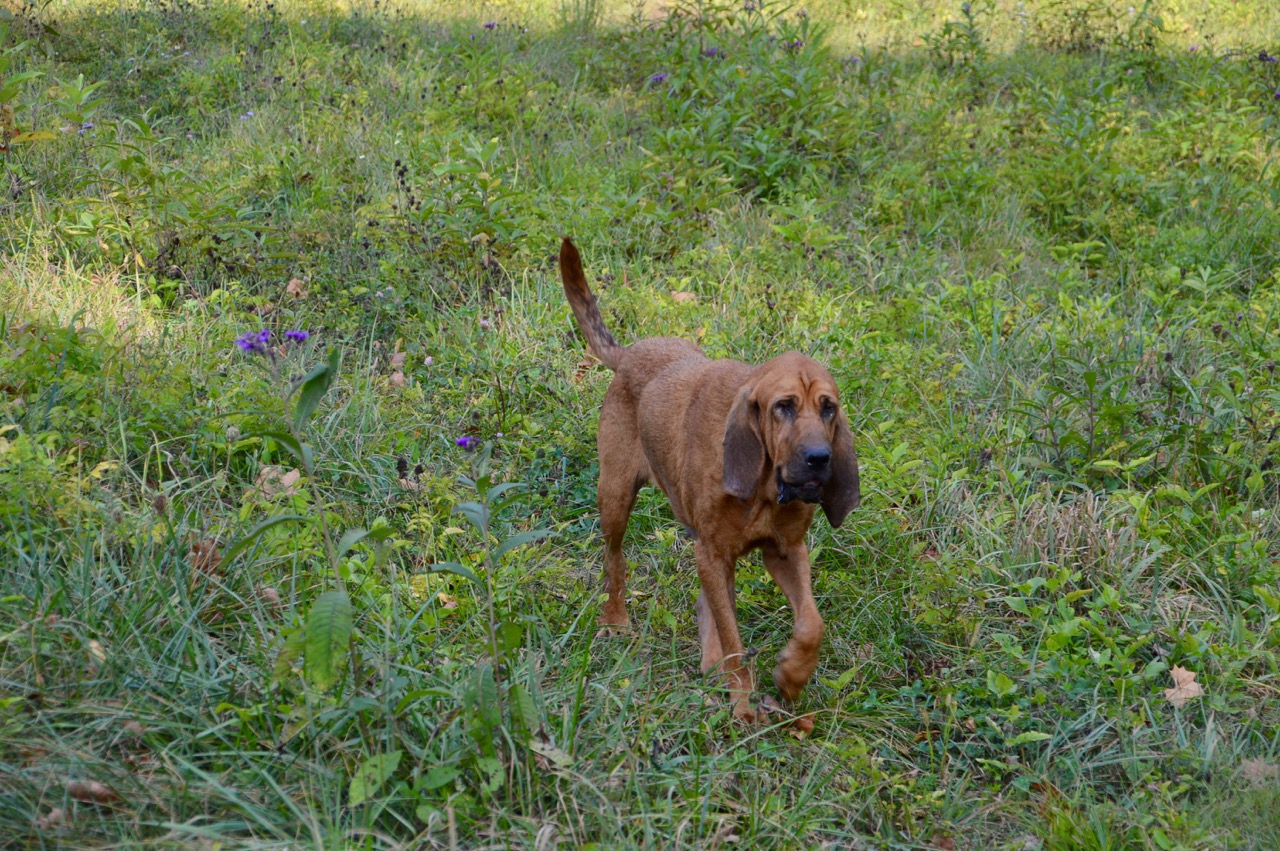 I updated my iPhone and iPad Mini with the new OS 11 last night and today ... I don't know much about the new features but I like the differences in appearance of notes, email and some of the apps.

Reading the "Sweet Setup" yesterday, the guy being interviewed had his 27" Apple monitor sitting on top of 2 books. I did that with two books I was no longer interested in reading and it puts my iMac at the perfect height.

Pavement from the bridge going into town has been scrubbed bare for new asphalt. I am assuming they will lay new asphalt before the Apple Festival the first weekend of October and will finish the new intersection downtown at the same time. That will be a nice improvement.

With no college football nor NFL game tonight, I'll watch the Reds and maybe do some reading.

Things are back to being good here in 'the tropics' of Southern Indiana.
at September 20, 2017