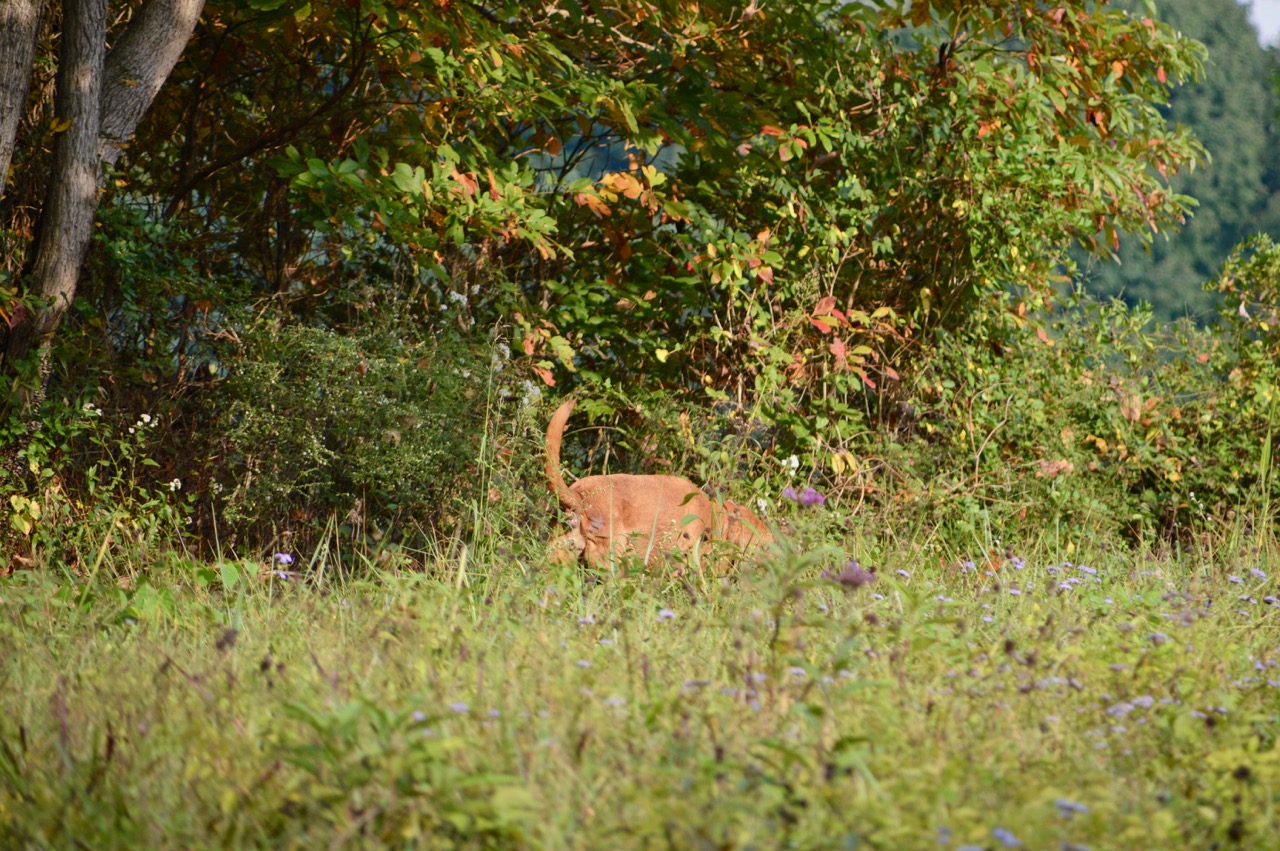 Stella continues her new routine ... walking north, scouting the middle of the field and then gradually walk over to our path trotting around the first corner. I'm fine with that as long as I don't have to walk her direction to get her. I could feel the heat last night at 11pm with the bedroom windows open, trying to sleep. This morning as we started our walk after 9:30am, the humidity was already thick.

Sadie did her normal start, following the deer path. I started my normal walk by thinking what would I be doing today. I've decided I need to make a grocery run at Walmart. 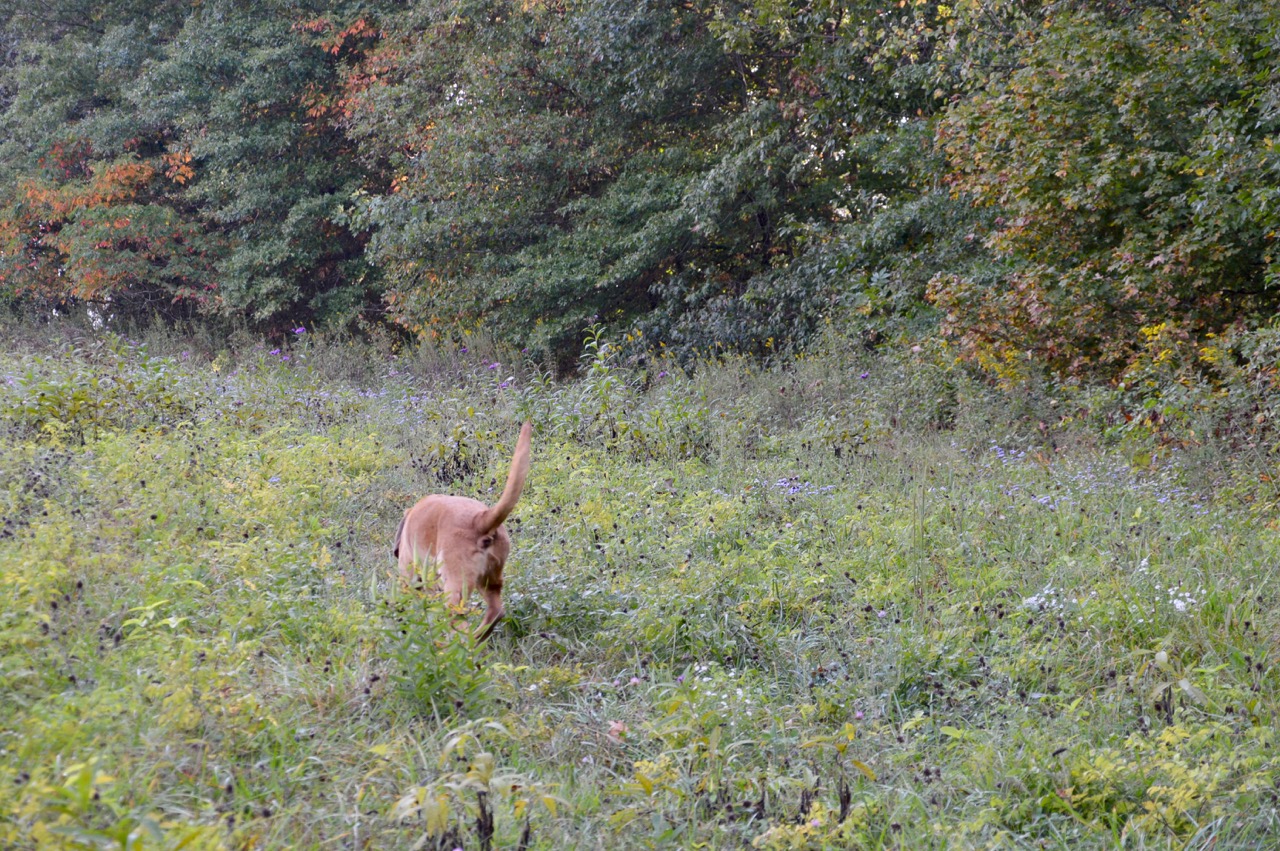 I didn't sleep well last night, tossing and turning. My guess it took me almost 2 hours to get to sleep, sometime after midnight. I felt tired this morning before coffee. Breakfast was three soft eggs and coffee. 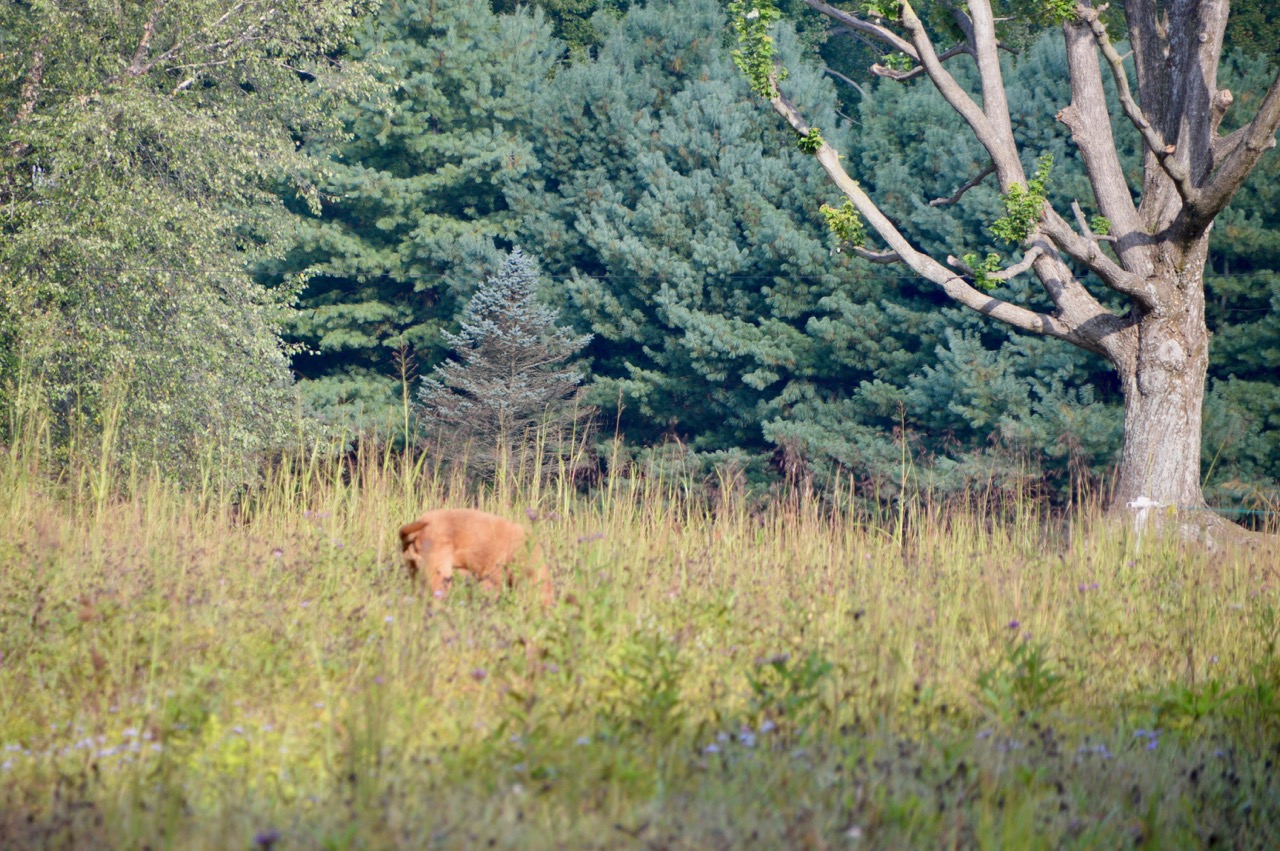 I'm not sure what is going on with my camera. I am not getting the 'sharp' focus like I should be. I hope my lens is working properly since I really don't want to buy a new lens. I might try the old Nikon 70-200mm this afternoon as a test. Although that lens is broke and will not focus higher than 70mm. 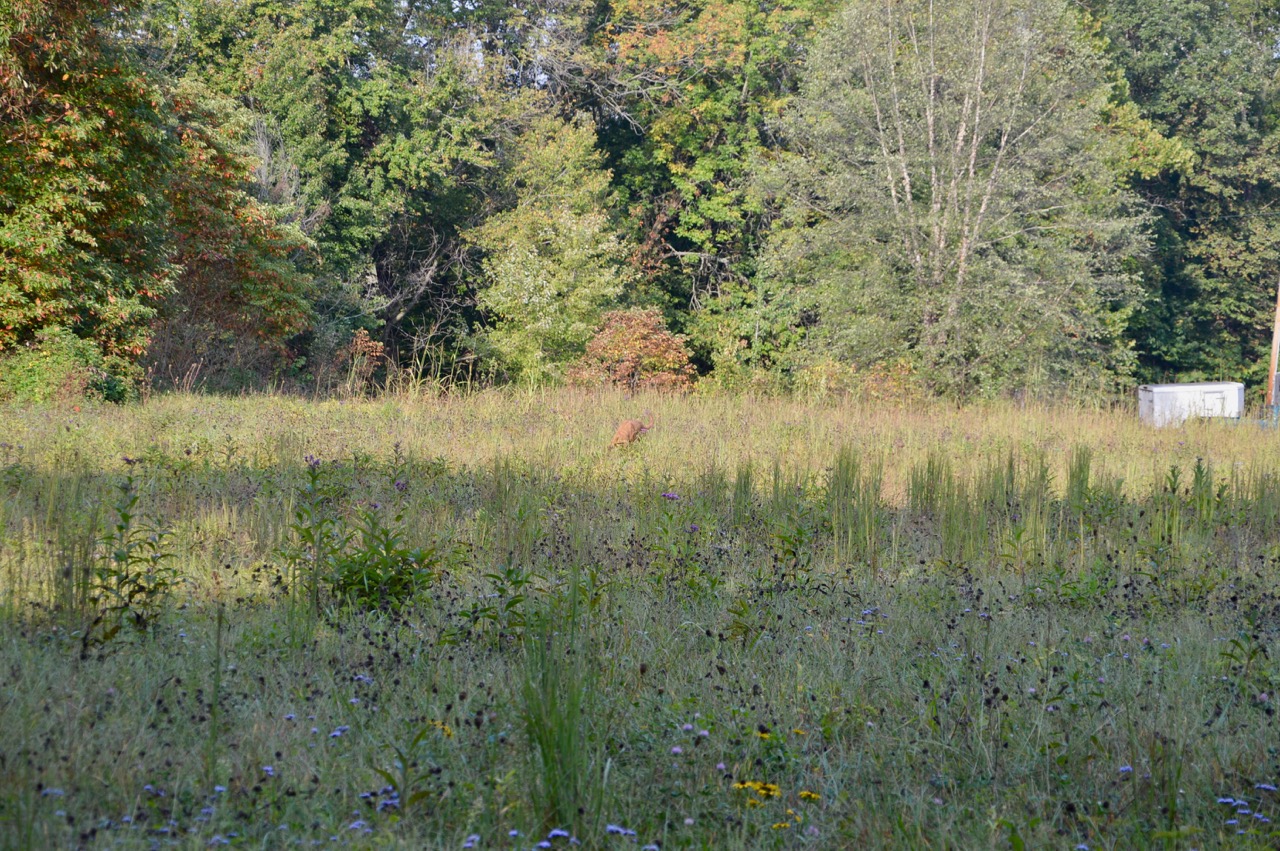 Slowly but surely Stella is making her way toward us. I did not adjust this photo ... notice how the house is crooked? The 2nd picture shows the trees are straight though so maybe I am getting some last second shakes at the time I press the shutter. 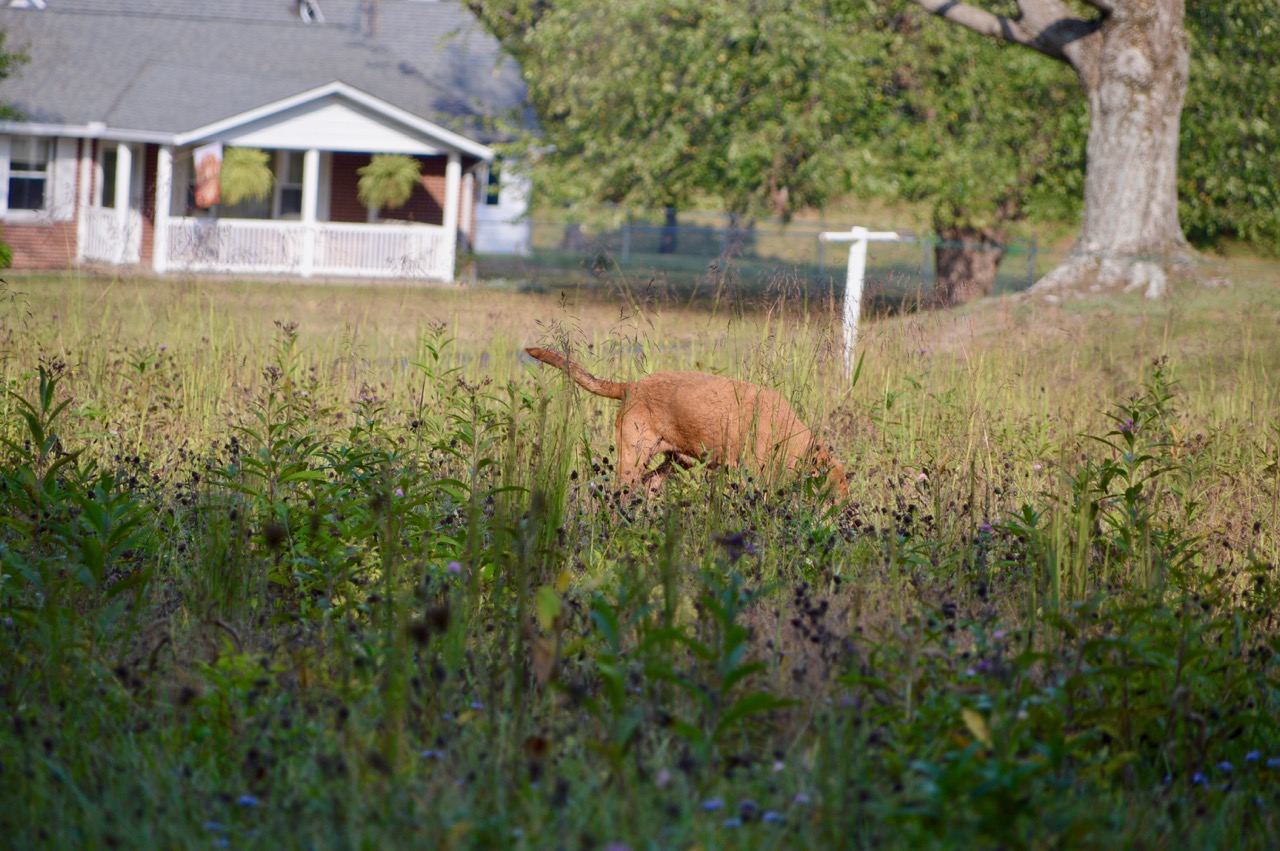 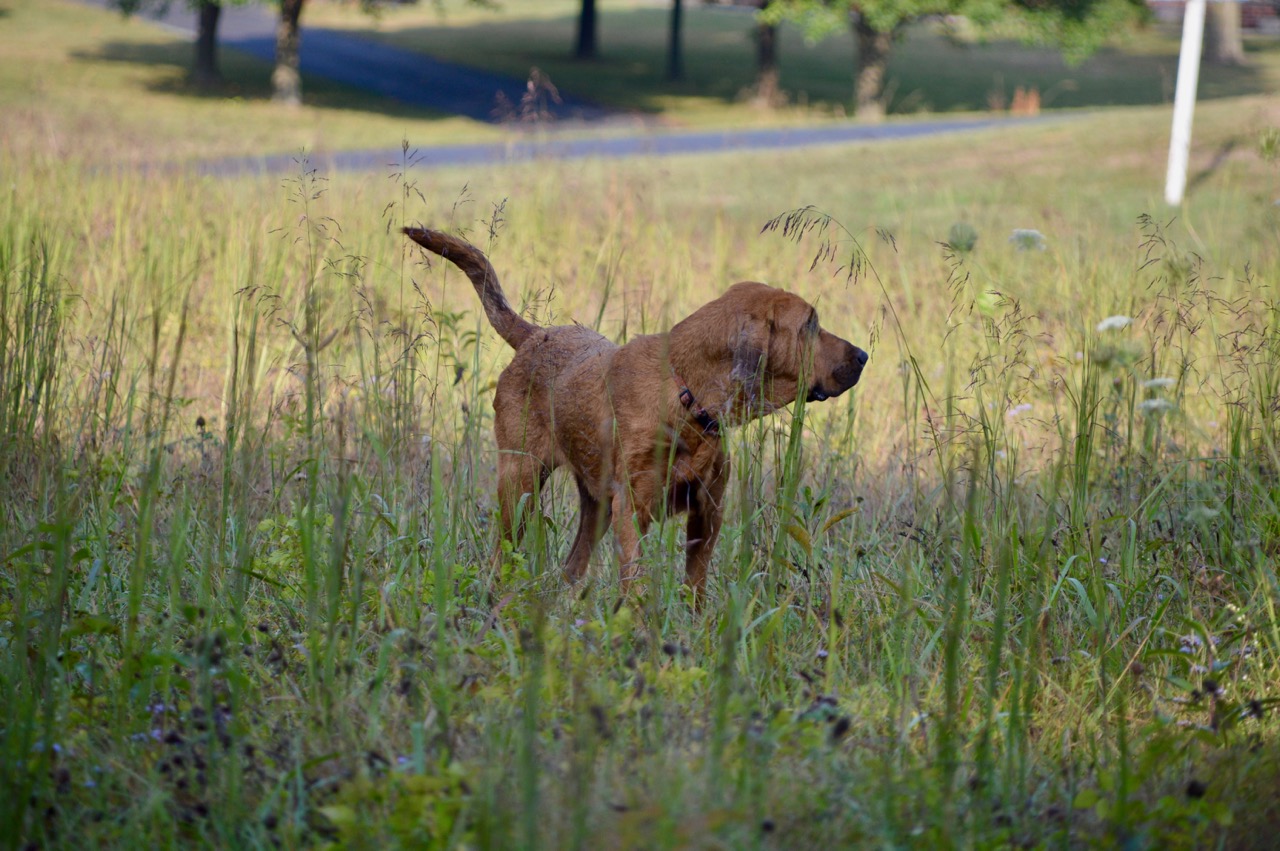 She followed the wide path made by the ATV ... at least she is headed in the right direction. 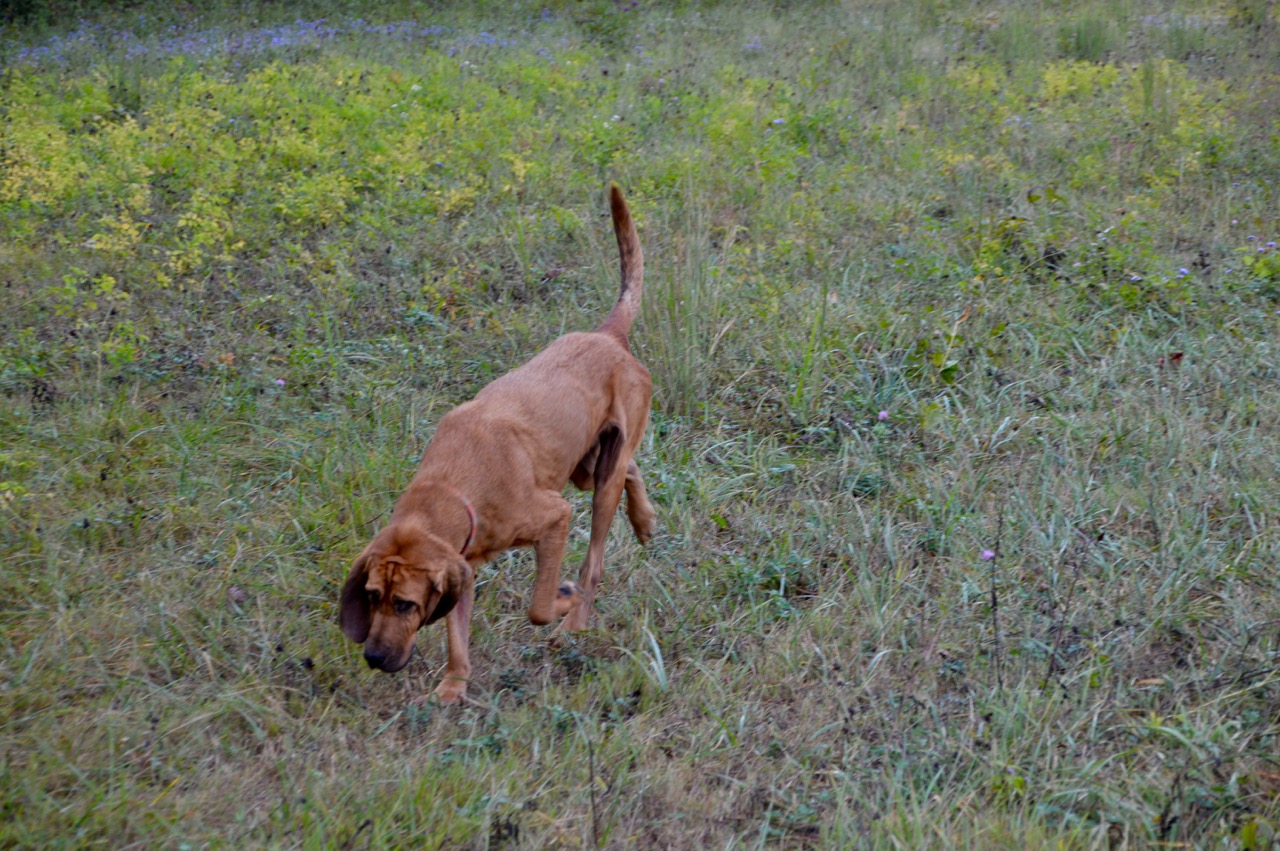 It's good to see her trotting every day. 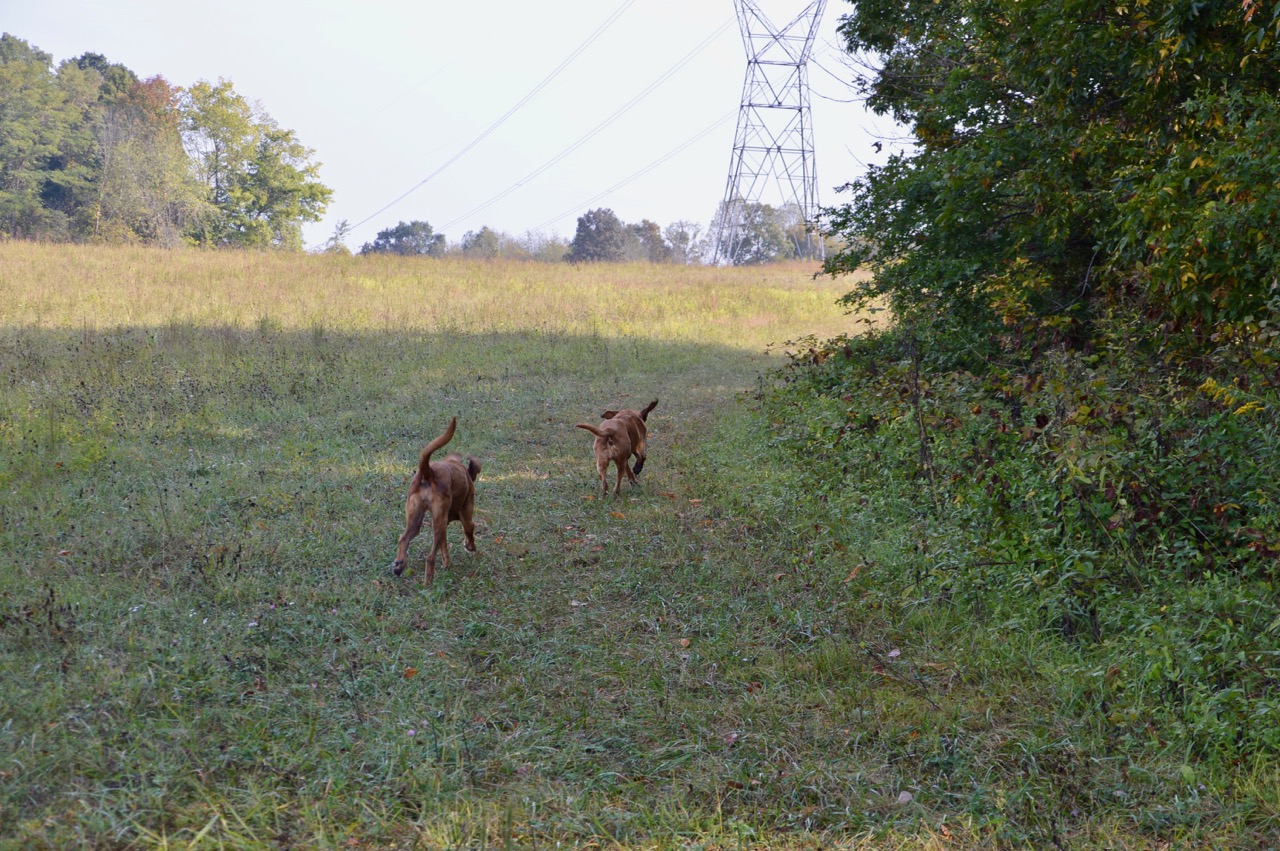 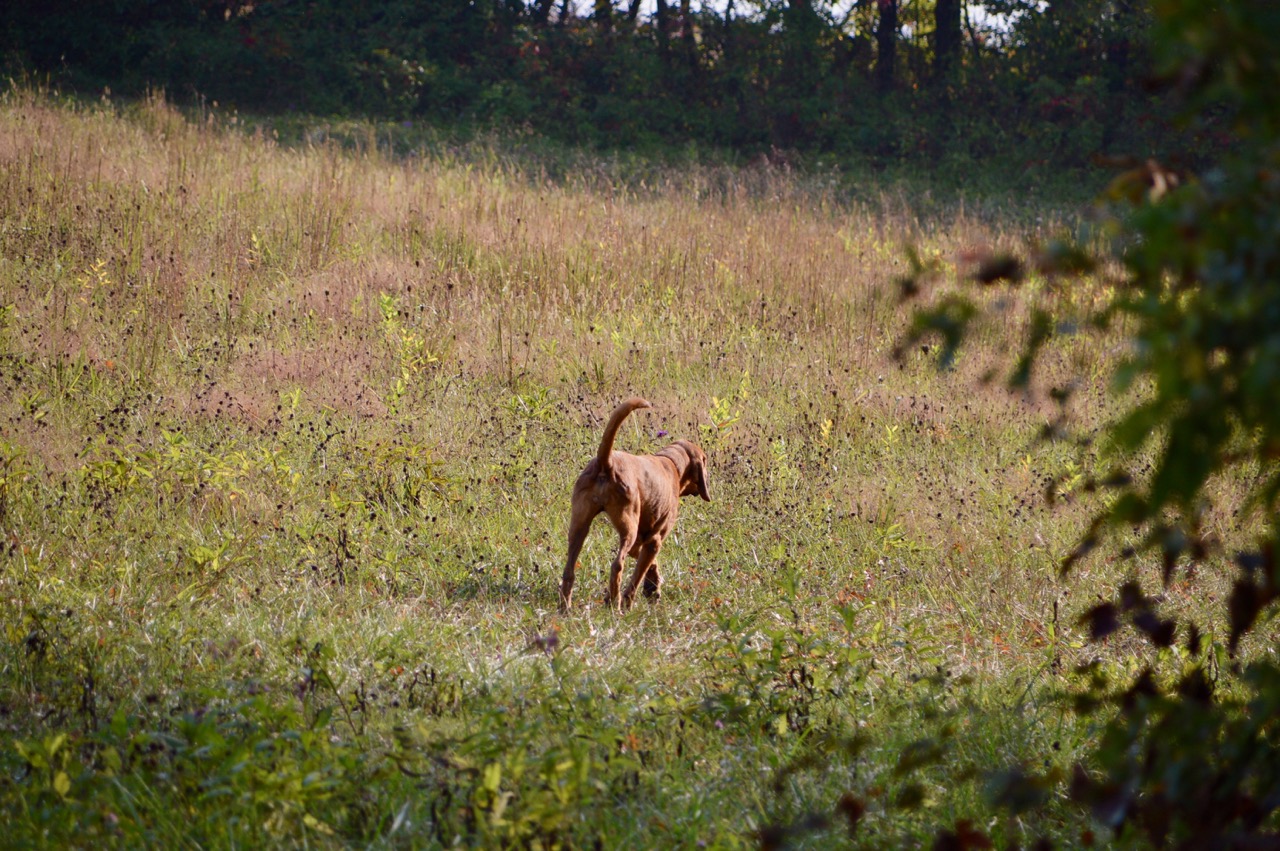 Both hounds sprinting to deer scat. I was told by Dennis last night that it has molasses in it, it tastes sweet to the hounds. No wonder they are addicted to it ... it's like candy to them, just like I guessed a few months ago. 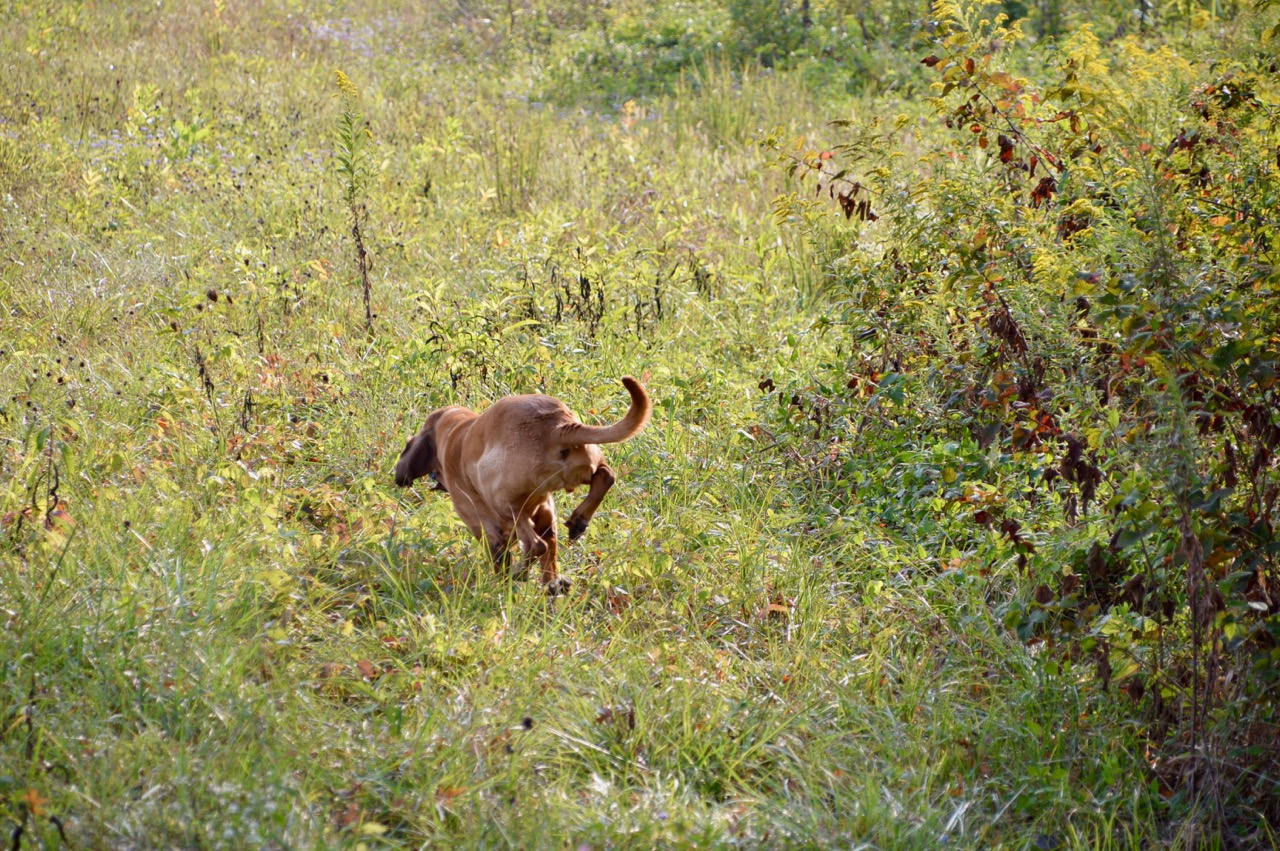 I continue to walk as always. Stella and Sadie have found their 'morning treat'. 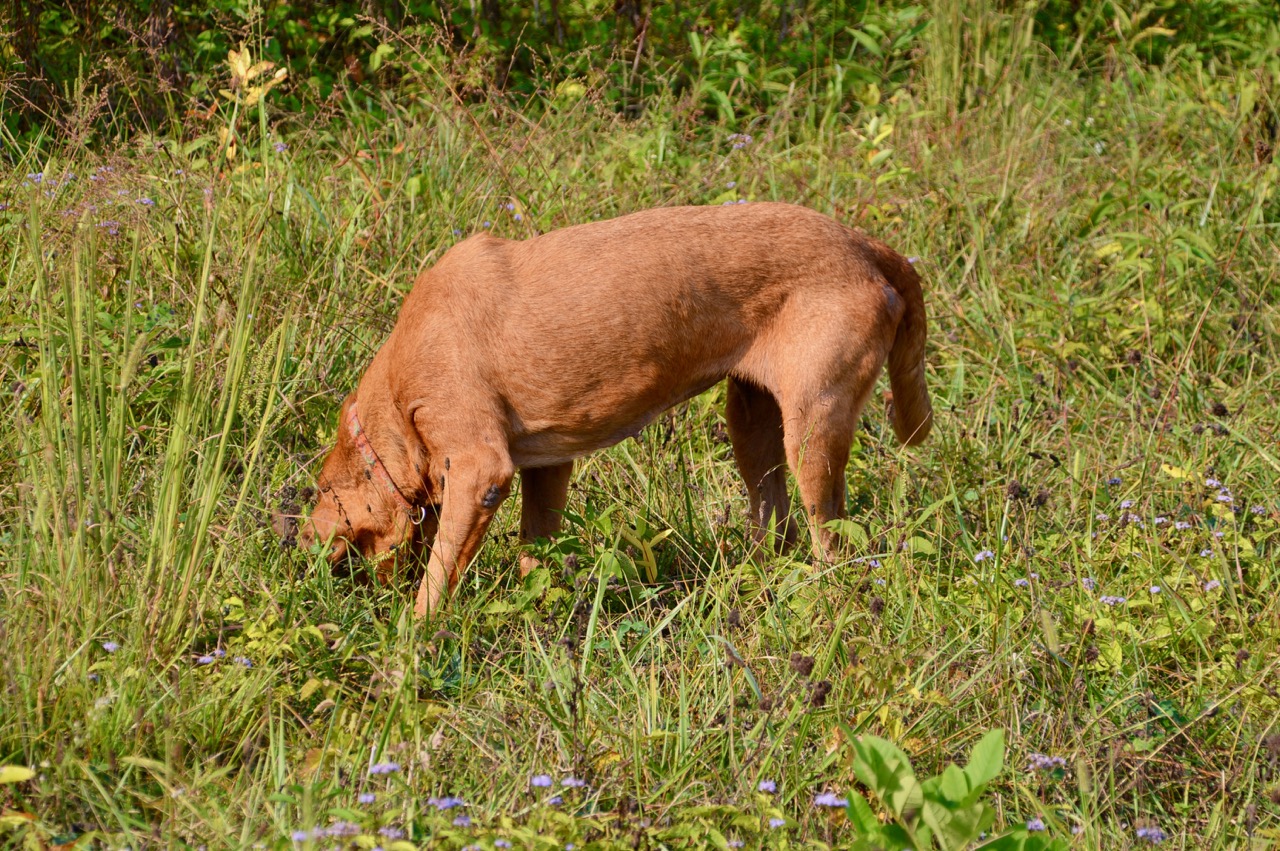 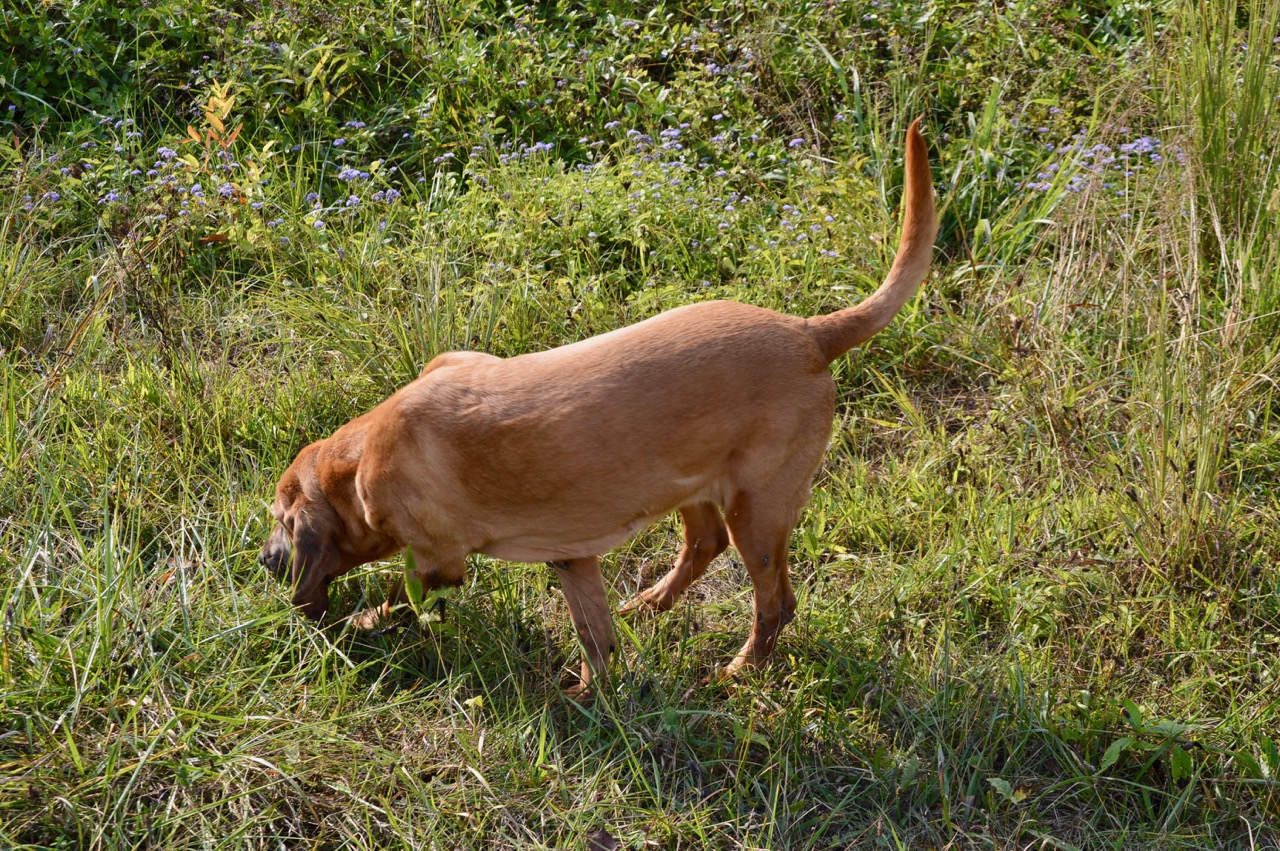 I never saw the truck and trailer, I didn't hear a truck and trailer ... but sometime after 4pm last night they moved the rolls of hay. What was strange I didn't see any truck or trailer tire tracks through the field back to Jim's driveway. I wonder if they will be mowing the field soon? They did last year the last week of September. 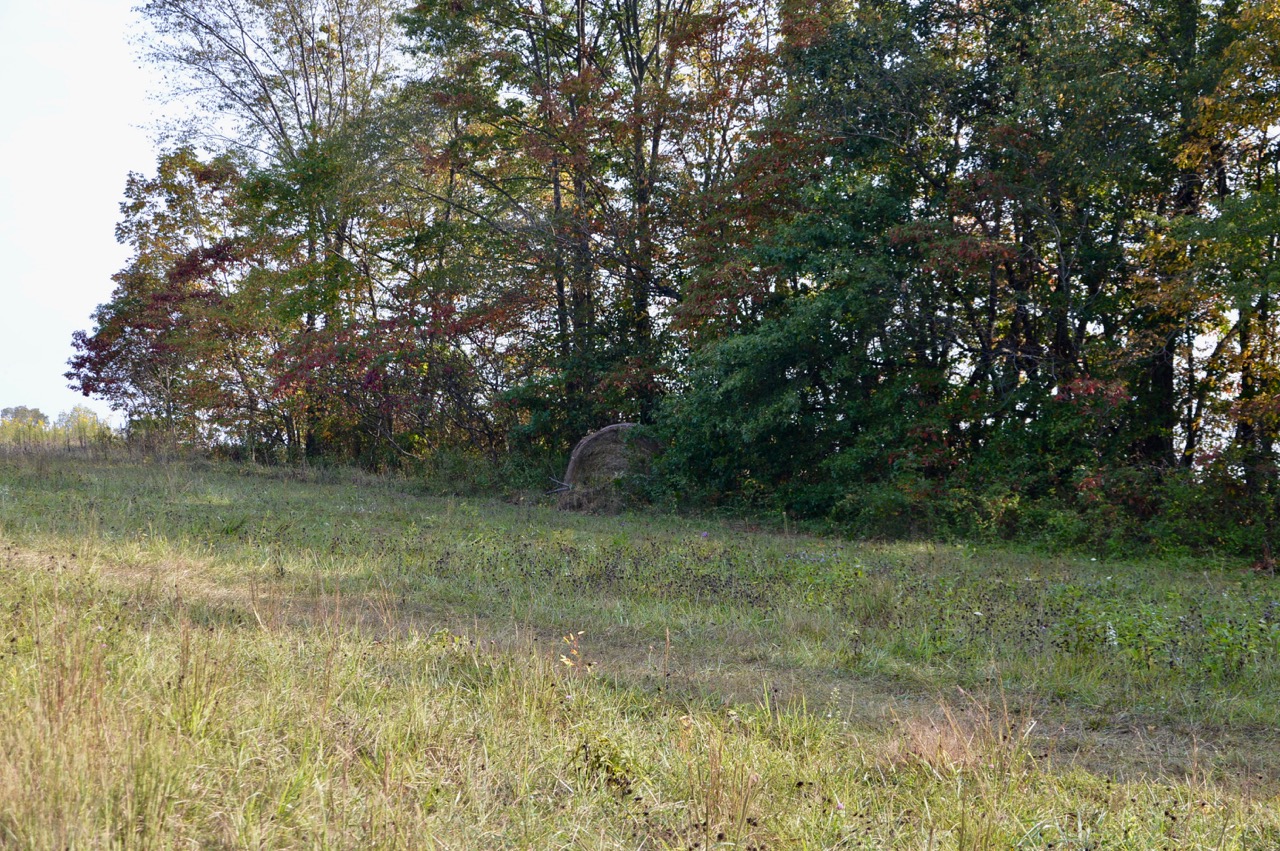 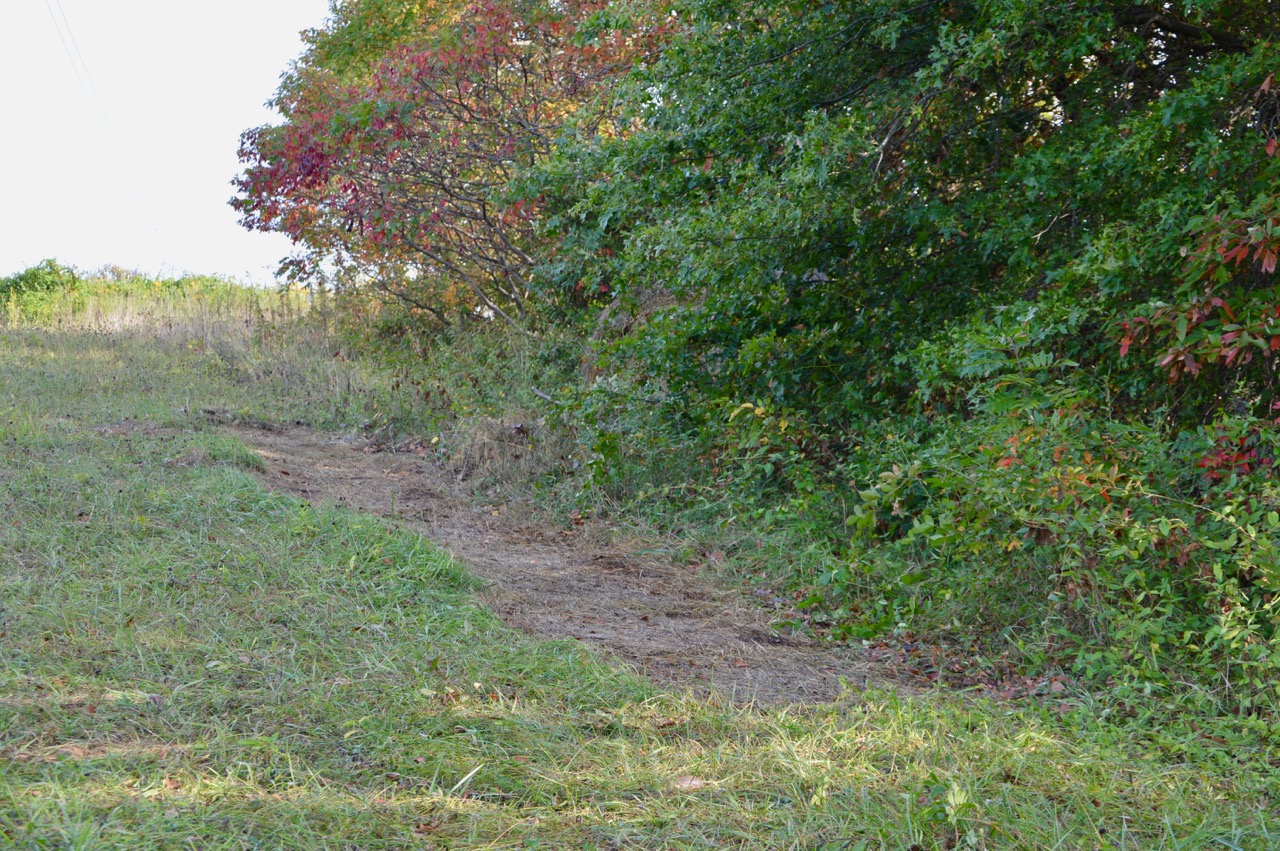 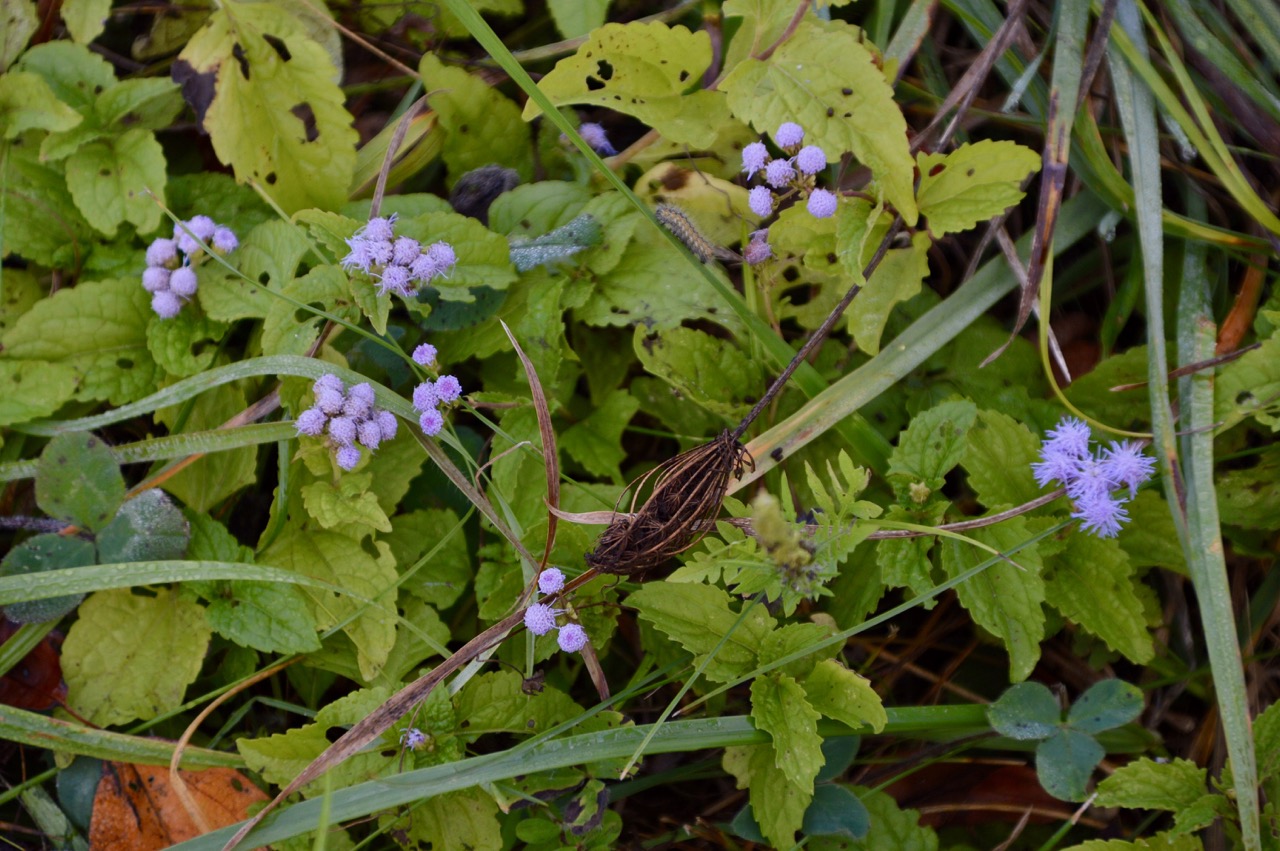 This roll of hay was busted they day they wrapped it. They would have lost that on the highway going back to their farm, which I think is a good 10-15 miles north of us. They moved it into the wooded area of the field. I wonder if anything will use that hay for winter food. Do deer eat hay?  I don't know. 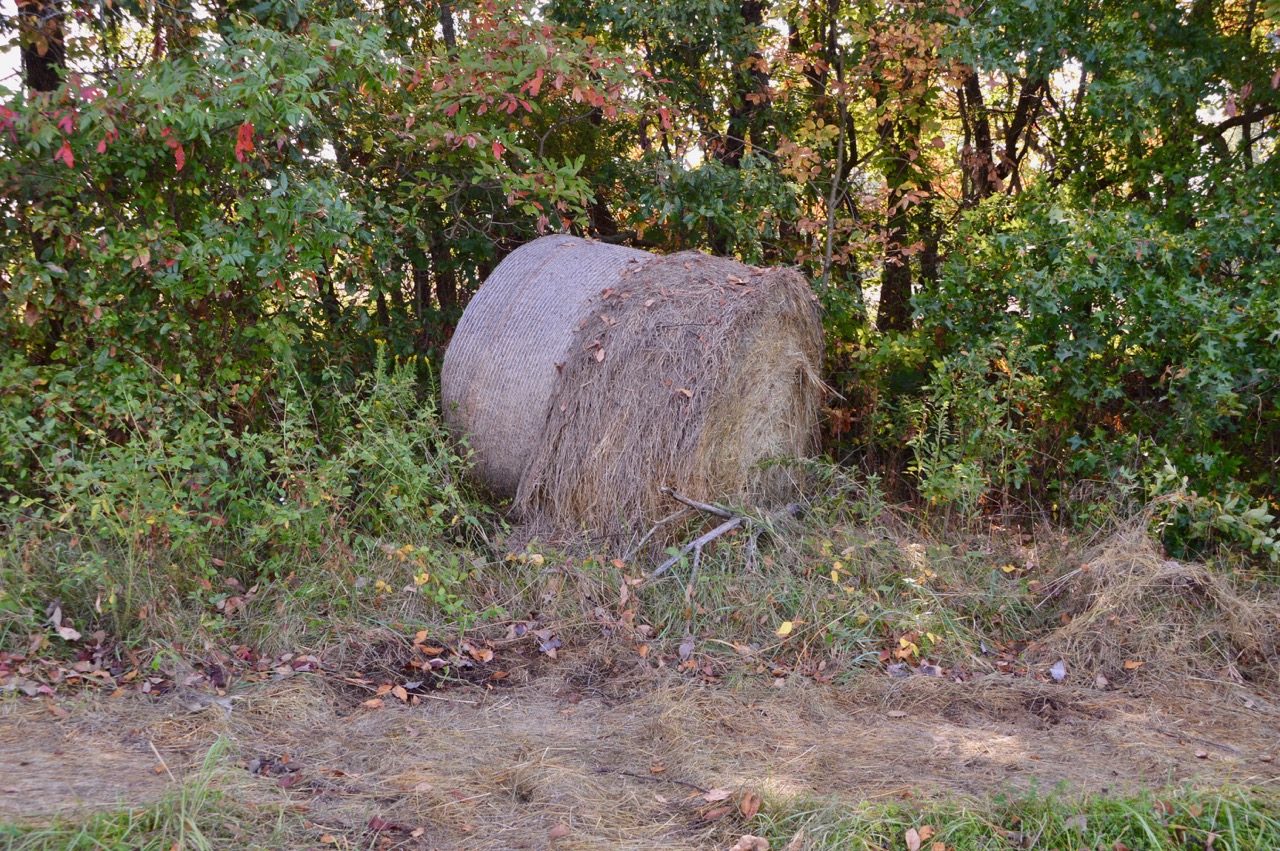 I've made the final turn of the walk and the hounds are more than content ... they did not come when I called them. I had to walk over and pull Stella by the collar back to the path ... she was very very stubborn today. 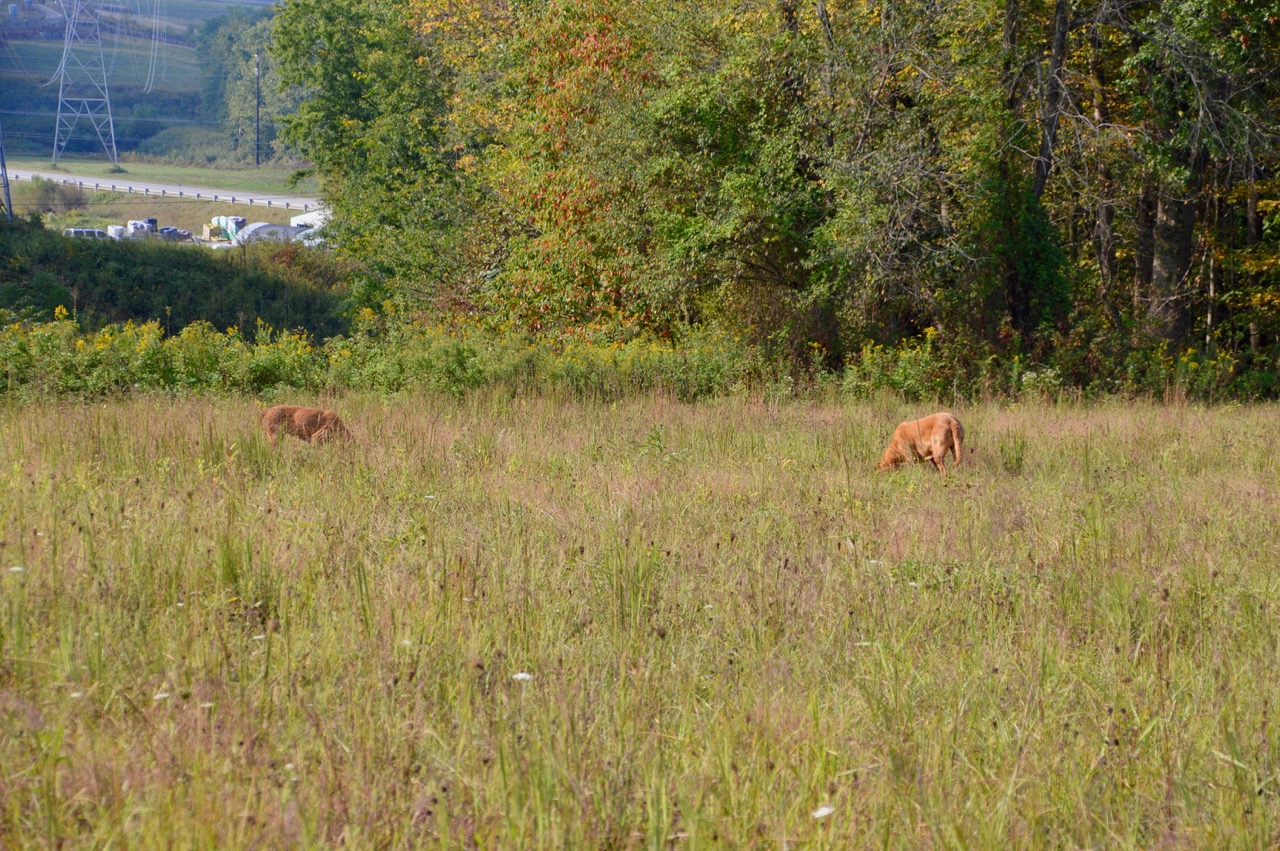 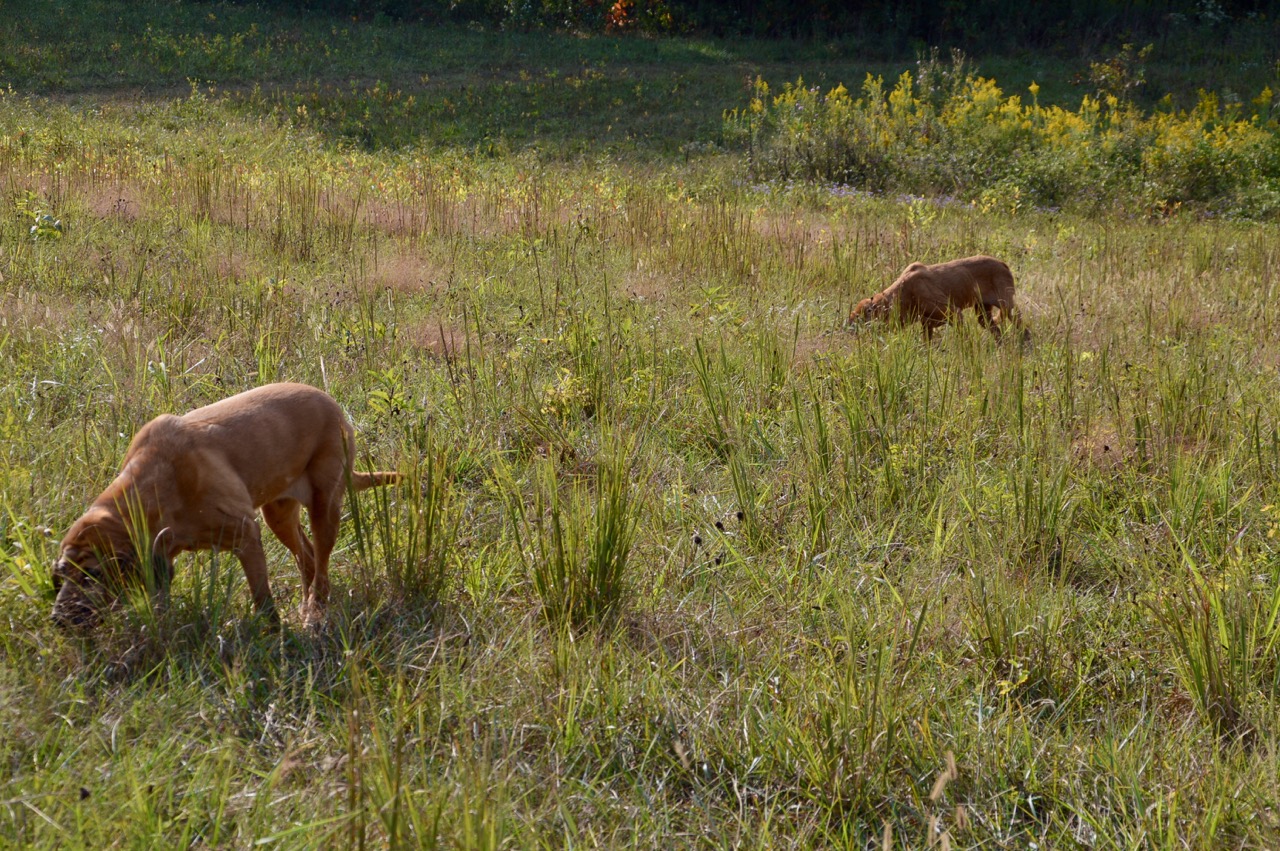 It was slow but they finally headed home. 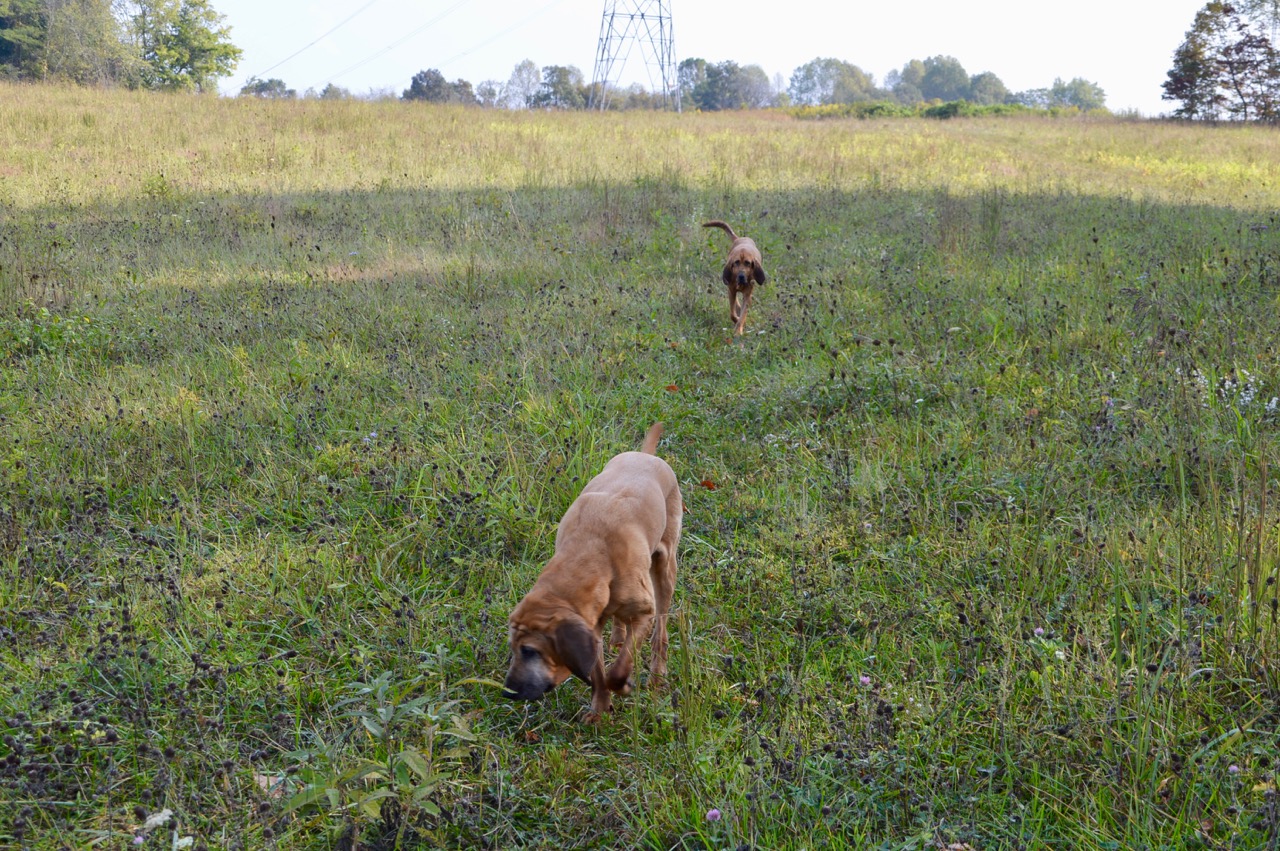 I updated the iPhone to OS11. I am not sure what all of the improvements are but I swear they did something to the camera and also the quality of the photos. I took this next photo with the iPhone yesterday. 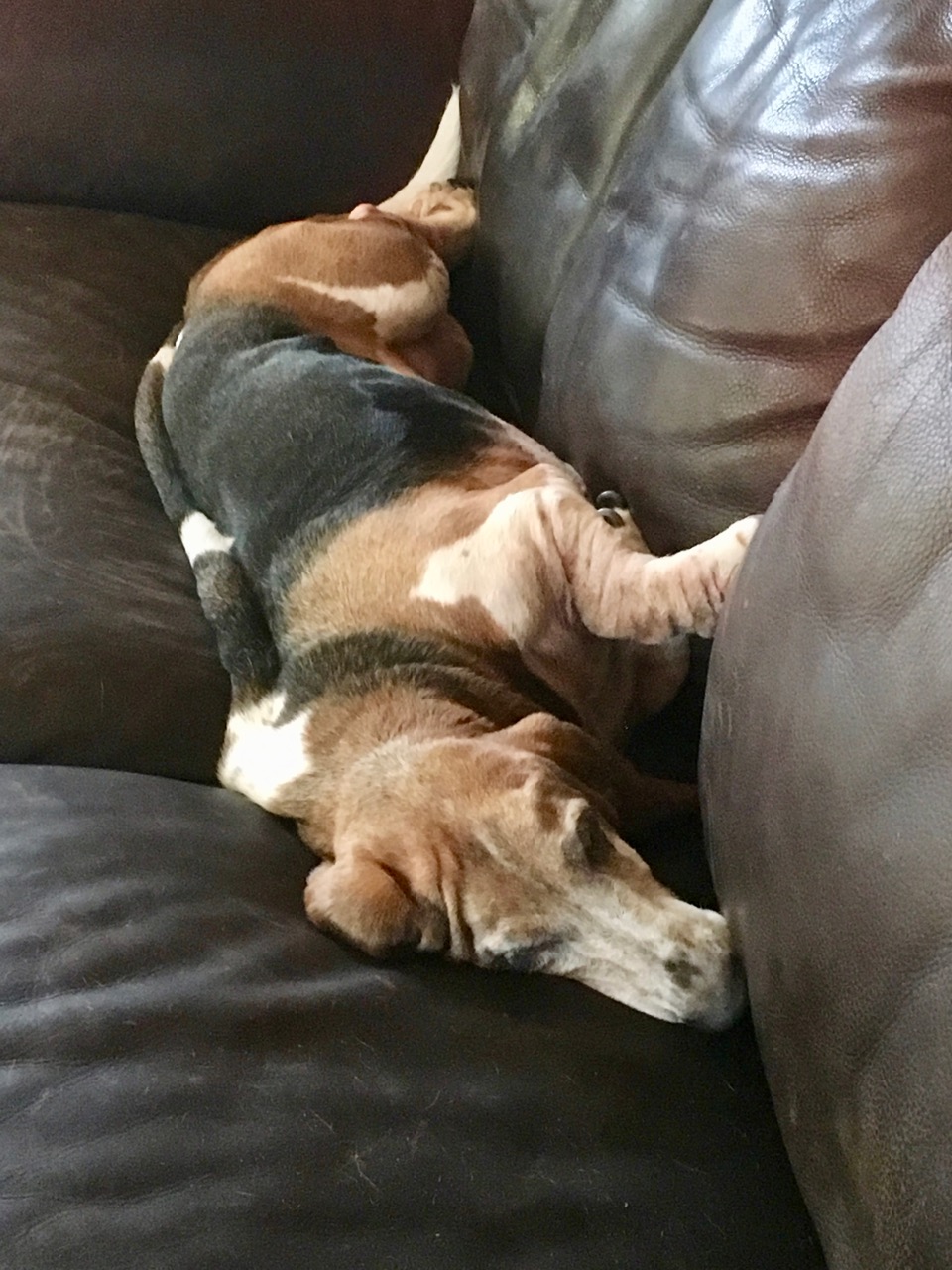 Taken after I mowed the yard. This has been a good ball cap. I wonder how many other people wear a SacState ball cap east of the California state line? 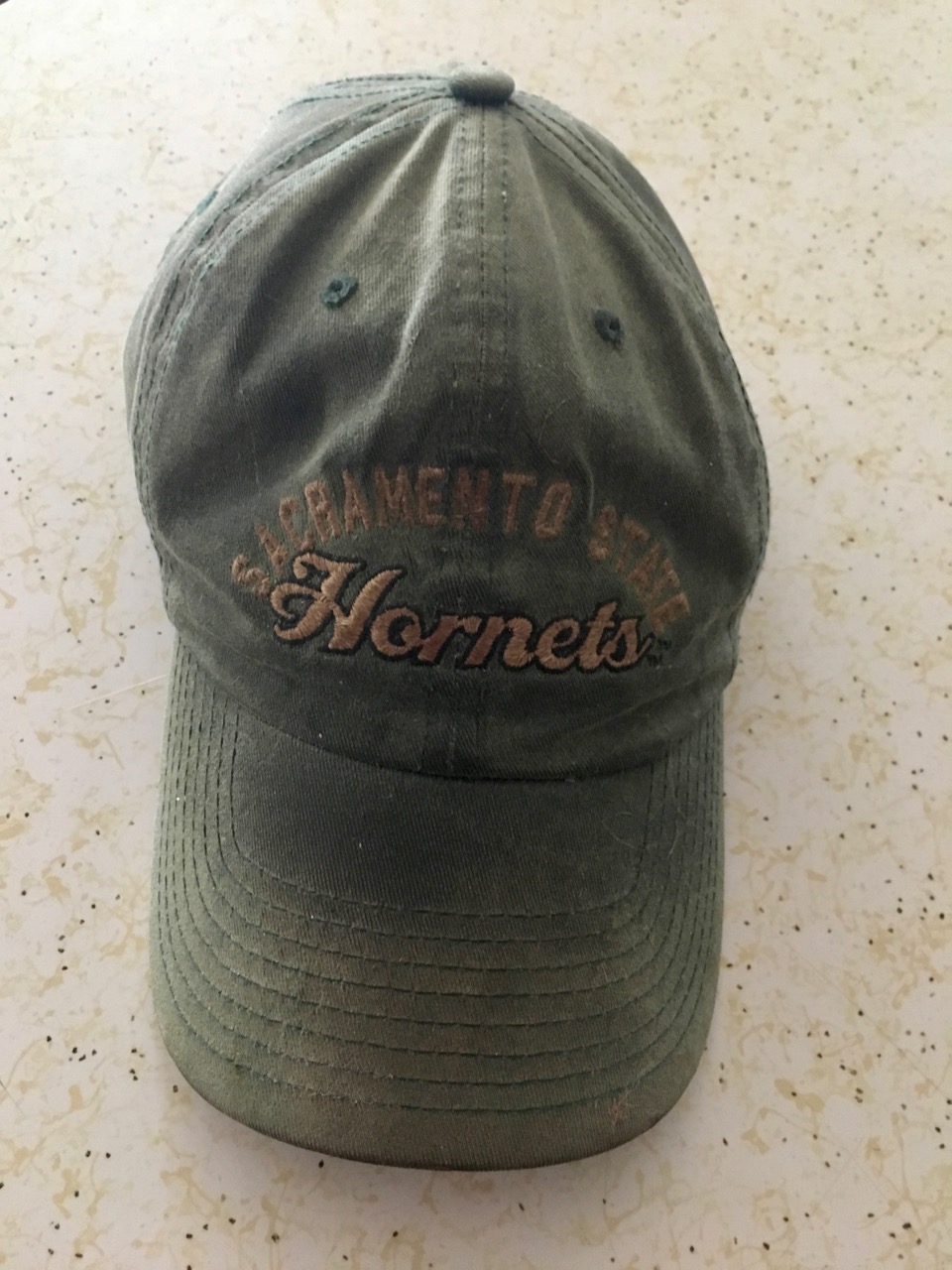 The hurricane this week wiped out the electric grid in Puerto Rico. They estimate that no on will have  power for the next two to three months. The worst hurricane ever for them. Also on top of a terrible economy the past 11 years. That country is almost destroyed now.

With all the hurricanes it will be interesting to see how much my house insurance increases in May 2018.

Last night after talking to Dennis in Alamogordo NM, I looked at his house that he wants to sell for what he owes. But as I looked around the town again at house for sale ... I no longer want to live there ... too much sand, not enough grass.

Another great day here in 'the tropics' of Southern Indiana.